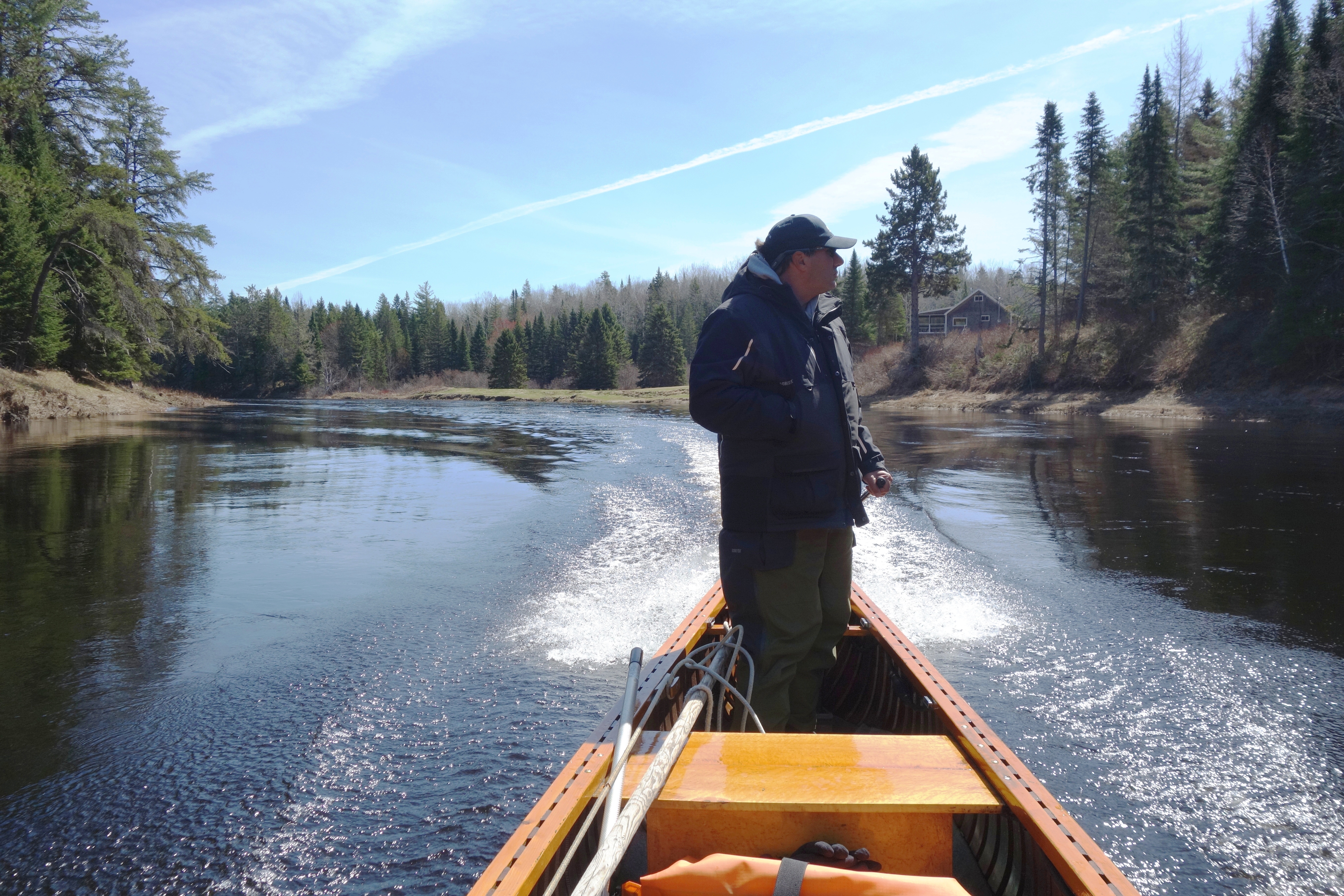 Guide Jason Curtis motoring down the Cains by Brophy Pool. Click on any photo to enlarge it.

Fishing Friends – I drove back on Saturday morning 5/6 to escape the heavy rain forecast for New Brunswick, including the Miramichi valley.  The river was at quite a high level for this time of the year already, and I see this morning that we got 50 to 80mm of rain – 2 to 3 inches – over the Miramichi watershed.  The river is at 5.1 meters at Blackville – the highest level of the season to date – and the graph is going straight up.  It probably won’t crest in the down river areas until late Sunday night or Monday morning.  We didn’t get the 100+mm that some forecasts predicted for certain areas, and with the river iced out and most of the snow out of the woods  I hope that we will see no more than some very high water and perhaps flooding of some low lying areas.  As guide Darrell Warren likes to say, “Hard to say not knowing.”

I was only able to get up for a couple of days of fishing on this trip, but as usual it was a great time.  There is no such thing for me as a boring day on the Miramichi or the Cains.  One of the express goals was for Jason Curtis and me to run a Sharpe canoe 21 miles up the Cains from where it enters the Miramichi to my camp at Mahoney Brook.  I love everything about this trip, and one of the best things is the chance to again see all the great camps spread along the way.  These are not huge, architecturally elaborate lodges as in the Restigouche style, but they are very appealing in their own right, and in keeping with the quiet, unpretentious beauty of the Cains.  All these camps are pictured in earlier blog posts.  Black Brook’s Admiral Pool camp is the first one, not even a mile up the river, then come the camps at Ted Williams old Teedlan Pool, Brophy Pool, Campbell’s, the Popples, Camp Stanton/Valentines – where the Sabbies River enters – Millet Underhill’s at Pigeon Ledge, a number of private camps in Shinnicksburn, Moore’s Pool, Doctor’s Island, Muzzerol Brook, Vaughn and Kevin  Anthony’s, Six Mile Brook, and finally Mahoney Brook.  After Mahoney Brook it is many miles upriver  before you see another structure – I personally haven’t been quite that far. 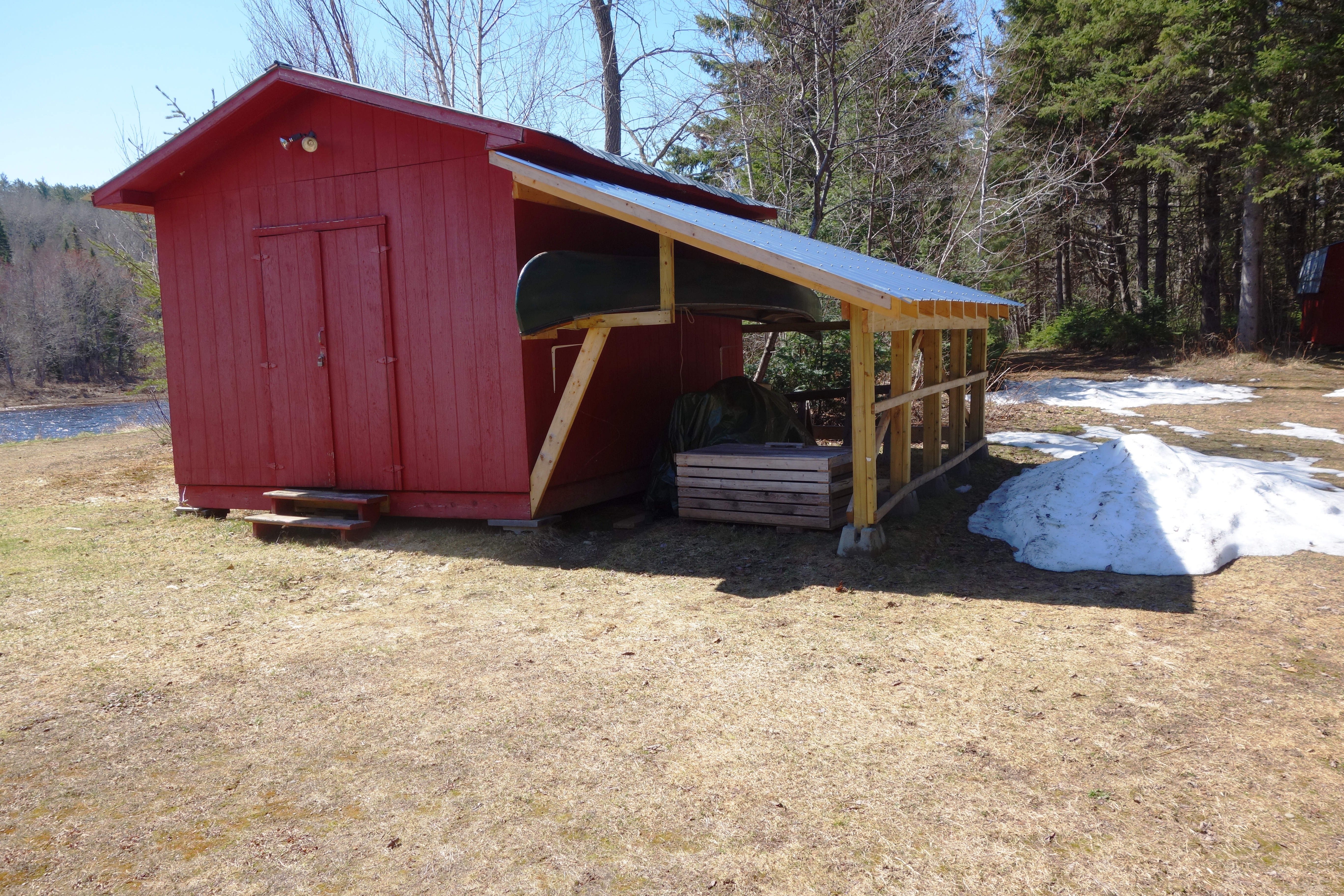 Jason and I surveyed the camp and road in to see if we had suffered any winter damage, but everything was essentially as we had left it last fall.  We grilled up Jason’s specialty of hot dogs slathered up with barbecue sauce, admired the view, downed a beer and went back out to fish the home pool for brook trout.  As expected we found a few at the lower end of the run where the current begins to slow up to a comfortable pace.  Casting our trout confidence fly, the Black Ghost, I got a nice strike that had me believing that I was on to a 3 or 4 pound brookie.  It got off not too far from the net, but looking down into the tannic Cains we never caught a glimpse to identify it.  After a couple more short strikes that also were solid enough to make me think that a substantial fish had hit the fly, I finally hooked up again, and this time Jason netted a very well-mended and remarkably silvery grilse kelt!  These are fairly rare 20 miles up the Cains, and in fact Jason in his life-long fishing of the river had not gotten one that far up.  The fish was in terrific condition. 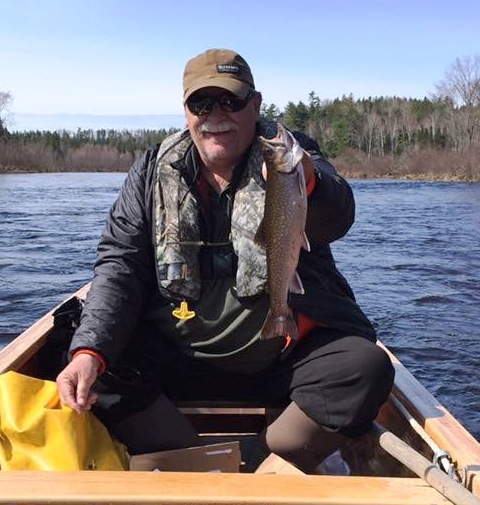 A half hour later we had dropped down to where Six Mile Brook enters, and were picking away at some brook trout in the seam between the brook and the river when Keith Wilson and his friend John Robinson appeared in one of Wilson’s jet canoes.  They had come down from launching at the Doaktown Road and were going to spend the night at a friend’s camp further down the river.  Later Keith got a salmon kelt at a pool in Shinnickburn.  He saw the fish roll at the tail of the pool and cast to it.  Good stuff for spring salmon fishing where the norm is scraping the bottom with heavy sinking lines!  We saw quite a few fish roll and jump at places along both the Cains and the Miramichi shore lines.  This, Willy Bacso told me when I first started fishing the river, is what the kelts do as they are beginning in earnest to move out of the river.  If they are leaving now they should certainly have some camouflage from the seals in the form of the big brown river that we will undoubtedly have by tomorrow as a result of all this rain. 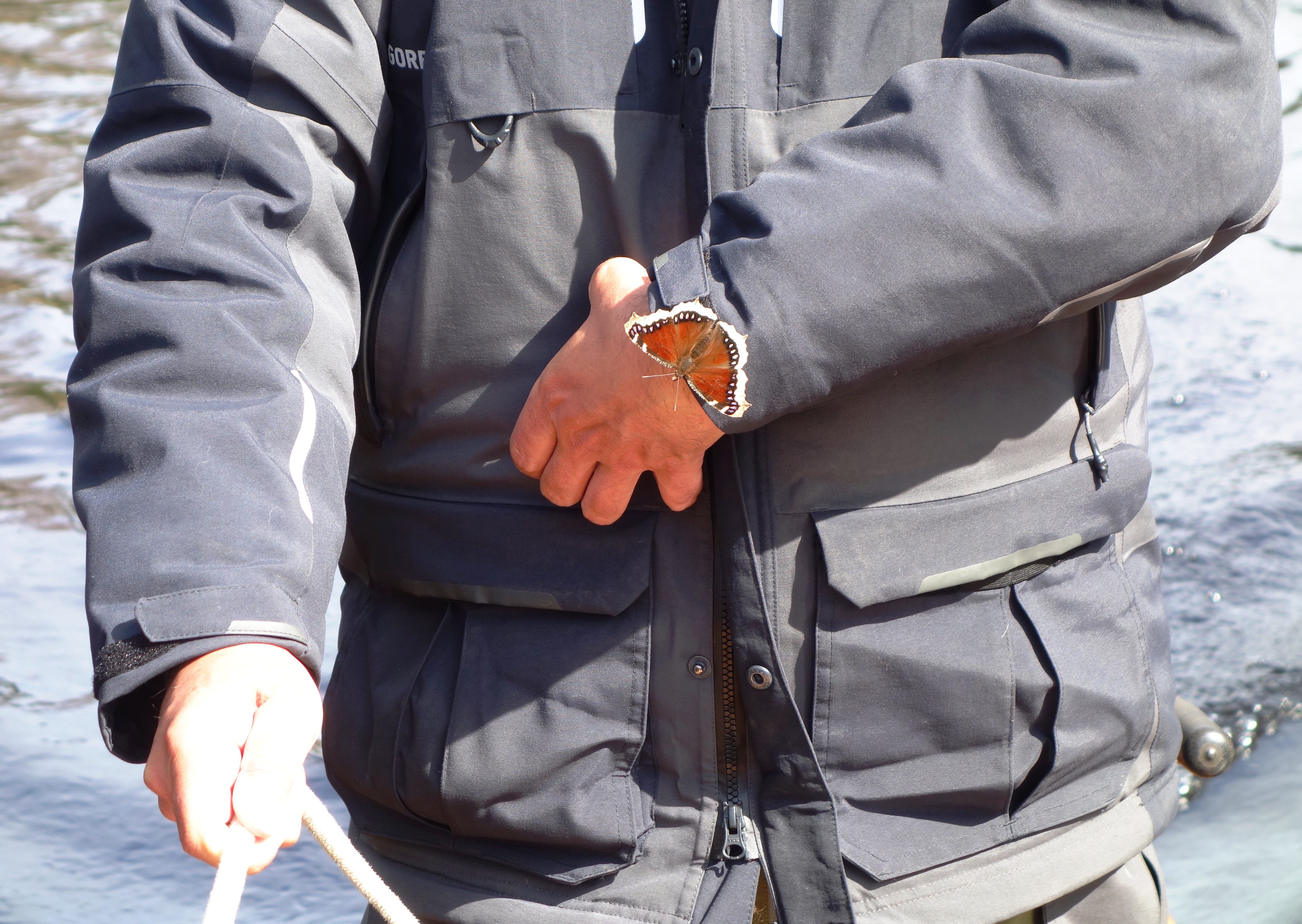 When I was in camp two weeks ago the bird life was relatively limited, and wildlife was still in post-winter survival mode.  We had a number of hungry deer out in the fields at all hours of the day.  Now we are back to  a smaller number of animals.  I watched two of them with binoculars walk out and lay down in the field just as the evening turned to darkness.

There definitely were new summer arrivals, and on this trip we saw a pair of turkey vultures, several eagles, and a pair of sharp shinned hawks soaring around over us on the Cains.  There seem to be numerous king fishers around this spring, and the dozen and a half swallow boxes set around Campbell’s fields were buzzing with tree swallows from dawn to dusk.  In addition to a yearling moose up near Mahoney Brook and a bear near Underhill’s, we even saw the first large butterfly of the year which landed on Jason’s hand for a rest.  I looked for but didn’t see bluebirds back at Campbell’s, and it is still a bit early for the humming birds, but they will be there in force before my next trip in early June.  I hate waiting that long, and would like to make a late May trip to try for a very early salmon and sea run brookies, but I’m headed to the Varzuga on May 24, so the sea run brookies will have to wait until next year. 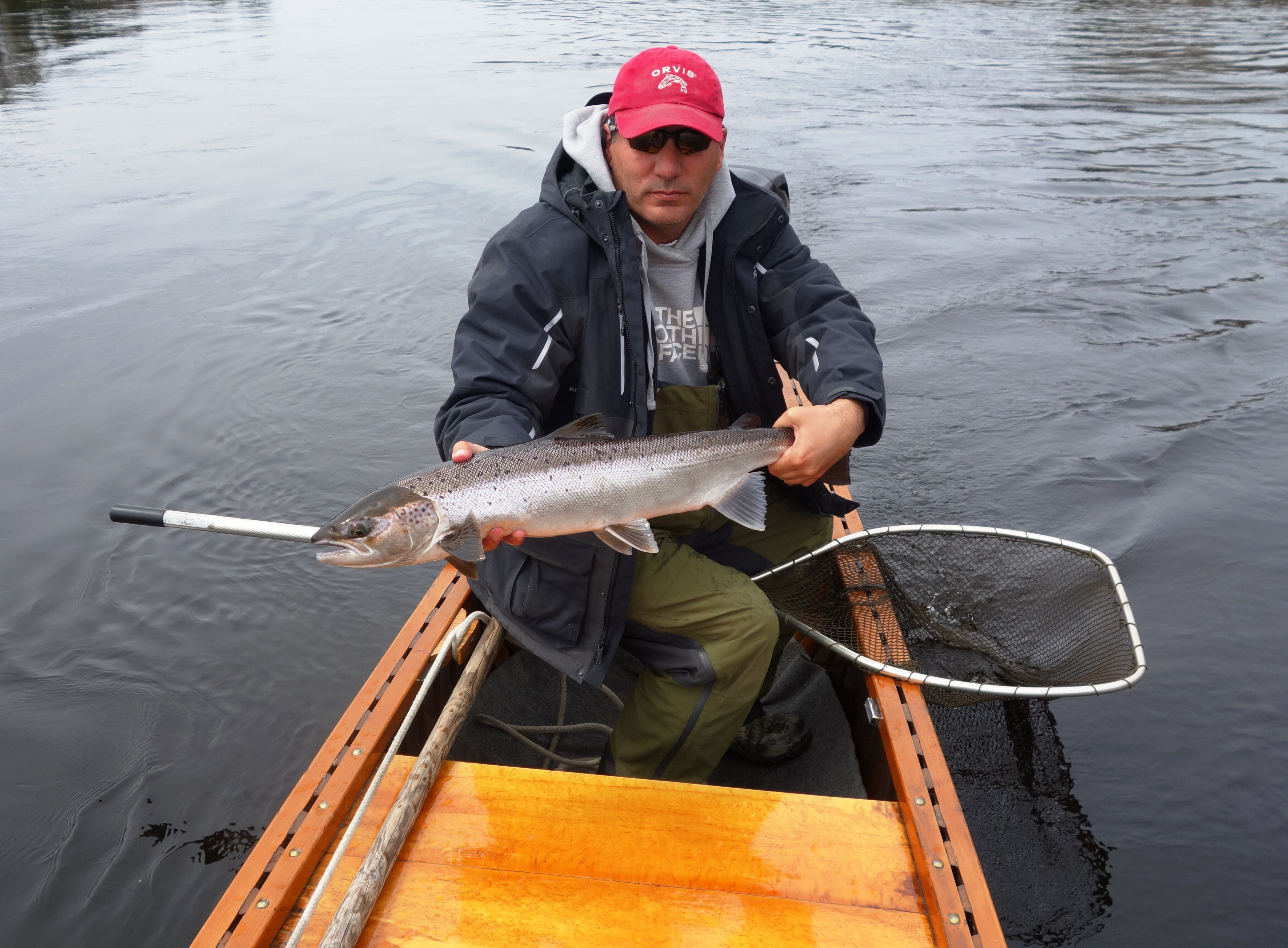 Golden Horse Shoe salmon kelt, one of several that afternoon.

A hallmark of this spring’s kelt fishing has been how very good it is upriver from us, but comparatively slow it was on the lower river – still some good days, but not up to normal standards.  Keith Wilson said that a sport who has been coming to his family’s place for 40 years remarked that it was the best spring fishing that he had ever experienced.  Apparently he limited out every day of his trip.

Some speculation goes that in the constantly high water that the Miramichi has had this spring that the upper river has been clean and friendly whereas the lower river has had a lot of dirty water to contend with.  On Friday I did most of my fishing on the river right around Campbell’s.  Willy Bacso used to say that this big bend in the Miramichi was called The Golden Horse Shoe because it was such a gathering point for spring salmon.  I worked the old familiar shore line both up and down river from the camp and had a decent afternoon Friday with a number of large silvery salmon and a fair amount of additional strikes that didn’t take quite aggressively enough for a lasting hook up.

My first crack at using panorama with Iphone 7. The Cains just above Mahoney Brook.

13 Comments on “Early May 2017 The Miramichi Spring Advances – Slowly”