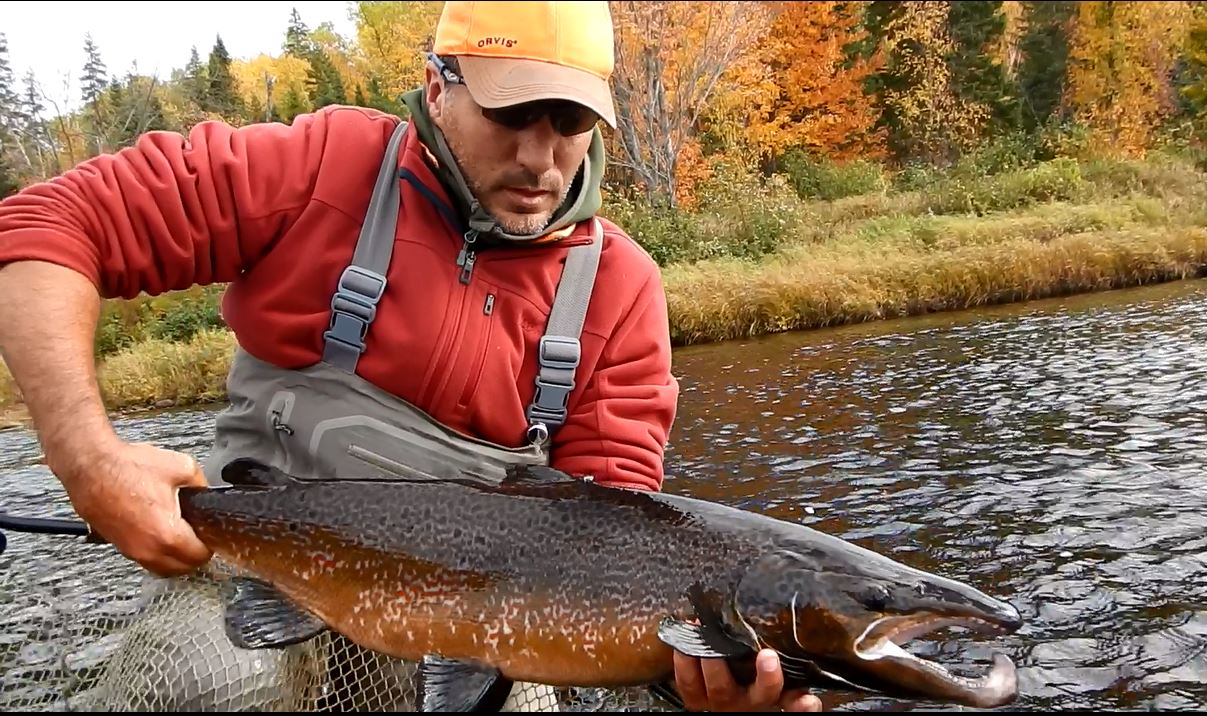 It won’t be long now! I know some of you have seen this before, but it is a goody, and captures that late season beauty both flora and fauna. Taken on the Cains River October 14, 2016.

The Department of Fisheries and Oceans has updated the fish counts in the trapnets used to estimate the salmon run into the Miramichi River as of 8/15/2017.  The numbers are poor, but given the wretched conditions of the summer I’m frankly a little surprised that they aren’t worse.

Note that the numbers below are the trap catches and only represent a small percentage of the actual number of fish in the run. Similarly the efficiency of the Millerton trap is not the same as the one at Cassilis, so you cannot directly compare their numbers with each other.  The important comparison is for the same trap one year to the next or better still the trend.

In the Northwest Branch the Cassilis trap net salmon count was 219 and the grilse number was 397.

The seemingly very low 2014 statistics illustrate where the DFO policy of making no estimate for times when high water blows out the traps hurts the comparability of the numbers year to year. It appears that 2017 MSW Miramichi numbers are greater than they were in 2014 when in reality we missed the best 10 days of the season that year due to Hurricane Arthur washing away the counting nets.  I was there enjoying the excellent run which officially was recorded as zero.  You can read more about this by scrolling back to 2014 in my blog.

The reality is that through 8/15 the run this year on both branches is poor compared to historical averages. The question is why.  These numbers come at a time when we are getting mixed reviews from some mainland rivers to our north, but also decidedly negative numbers from some Newfoundland Rivers like the Exploits that have been big producers in modern times.  We will have to wait until closer to November to know for sure how much the dearth of fish has been caused by this unbelievably rainless, warm, sunny summer -it really hasn’t rained to speak of on the Miramichi since early June.  There hasn’t been a single sizeable raise of water all summer.  The summer has been warm, but not really hot.  We’ve only had one or two days of 30C or better all summer.  We’ve had lots of nice cool nights too.  The problem has been no water – deep water is harder to heat up than shallow water.  I’m sure that there have been many years like it, but not in my experience.  We hear that fishing has been okay in the headwaters where it is normally cooler, but there have been very few if any good fishing days on the MSW Miramichi below Boiestown since about the 10th July.

It is certainly possible that we will have a strong run this fall that will in some part make up for the weak showing so far. It wouldn’t be the first time.  In both 1997 and 1998 the Millerton track records show that two thirds of the grilse came into the river after August 15th, and in fact through that date in 1997 the Millerton trap only recorded 267 grilse or about 60% as many as so far in 2017.  So the current situation isn’t without precedent.  We’ll just have to wait and see how it all ends up.  Thankfully the cool and hopefully rainy days of fall are drawing very close now.

So what stands in the way of the really robust runs that the Miramichi system is capable of?  Investors like to talk about the wall of worry; that is a list of potential problems that can derail a market, or in this case a run of Atlantic salmon.  Let’s list a few, in no particular order:

So which of these do we concentrate on? I say, especially since we don’t know which of these things is most responsible, or if it is the old “combination of factors” that we try to fix them all.  I saw a news article the other day with a Newfoundland official asking the federal government “what it was going to do about the salmon situation.”  Well, they could twist arms – and get the U.S. to help them – in Greenland, Denmark and France to end those mixed stock net fisheries, greatly liberalizes the recreational striped bass harvest, give the First Nations and gasperaux netters a quota of striped bass to catch and sell, put a few bucks into the warden’s coffers to do some meaningful enforcement work, put a two year moratorium on capelin harvest then reduce the quota by at least 50% while reviewing carefully all other forage fish harvest quotas, stop all retention fisheries for wild Atlantic salmon everywhere in Canada, and put some forestry conservation practices into place that will really do something to protect the rivers.

I don’t have any thoughts on how to change our climate, especially in the short run, but we can sure do a lot about the rest of the list.

PS As always, please feel free to contribute with a comment.  If you have already successfully commented in the past your comment will automatically be posted.  If this is your first post I will approve it as soon as possible and you will then be set for the future.  I’m finding that the comments provide some nice breadth of views and experiences on the subjects we are discussing.