Aug 15 The Dog Days of Summer?

Just back from 6 days on the Miramichi.  All is well with the  run, and according to the MSA – find the link on my home page and join if you aren’t a member – the trap numbers continue seasonally good.  I also read on the ASF – link in the same place and also very worthwhile – site someone comparing it to 2011…   Well, I don’t know about that just yet.  The grilse numbers especially, though recovered, are still far off the 2011 pace.  Well have to see what the fall brings, as I reported in my last blog 71% of the salmon run historically occurs on the Miramichi after Aug 7, and most of that is from Sept. 15 on – grilse are about 51/49 during the two time periods. 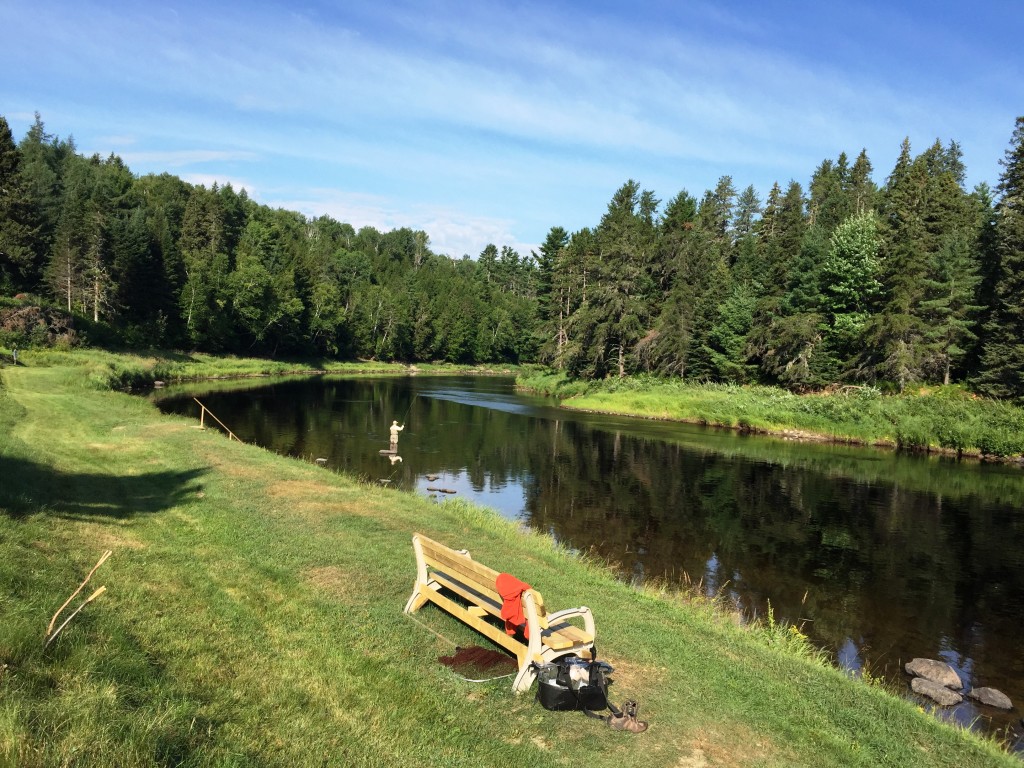 Photo above of casting on the lower Cains River.

We had pretty good fishing, especially for August.  The highlight for me was last Sunday morning the 9th when amidst drizzle and light rain I hooked 5, rolled a few more on bombers, and grassed 3.  Like that term?  It comes from across the pond you know, and I didn’t really haul any of them out on the grass – bad for them – but instead, fishing alone, I slide my hand down the line and popped out that little barbless hook.  Captain Steve Bellefleur got one of about 20 pounds on a bomber, but used all his luck up in the process.  Jim Graul, new to salmon fishing, landed two fish during his first evening on the river and caught fish on two other days.  Steve’s fish was unusual for a summer fish in that it was a large cockfish.  The Cains is famous for big, black, cockfish in the fall, but getting a good one like this in summer is a bit rare. 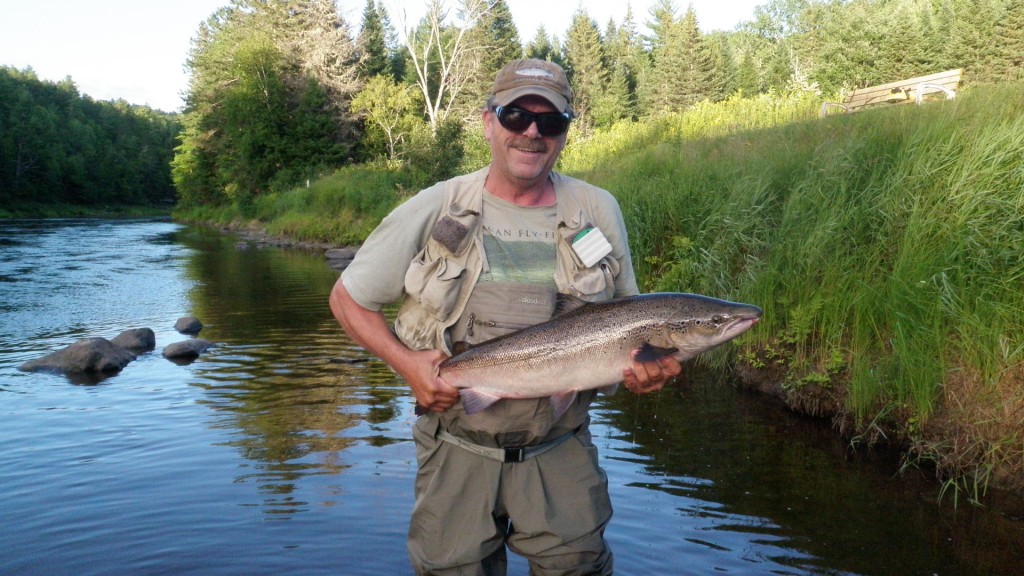 We saw other good fish, but the rest we landed were all grilse.  In addition to there being more of them I suspect that these young fish are more comfortable in warm water than the big guys who need some serious oxygen to be happy. 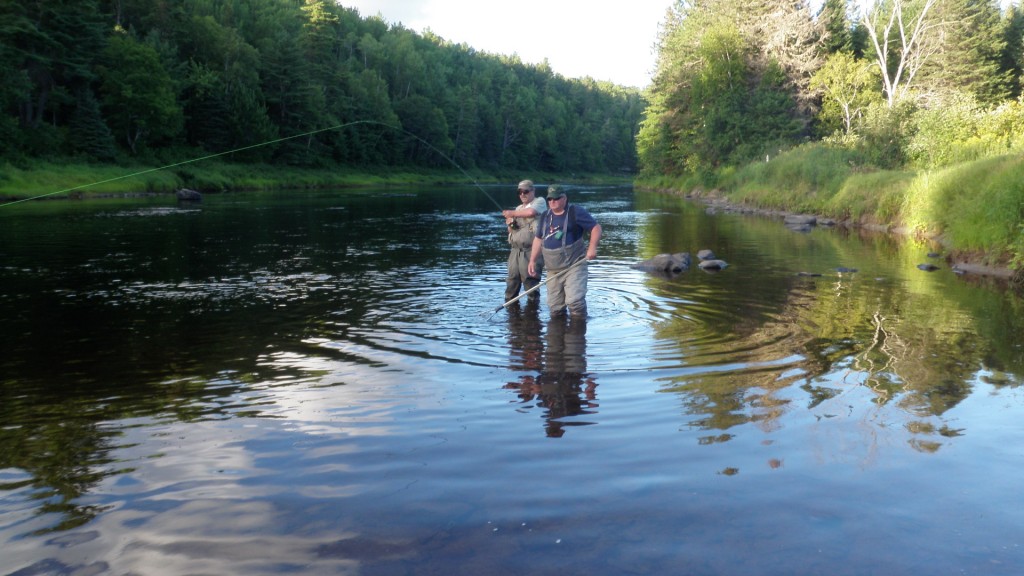 Inevitably it was cat and mouse with water temp.  We caught most of the fish in a lower Cains River, brook-fed pool, but several also came from the main river, especially in the period around the rain on Wed. and Thursday.  Morning water temps were typically mid to high 60s and lows 70s in the evening – 20-22C. 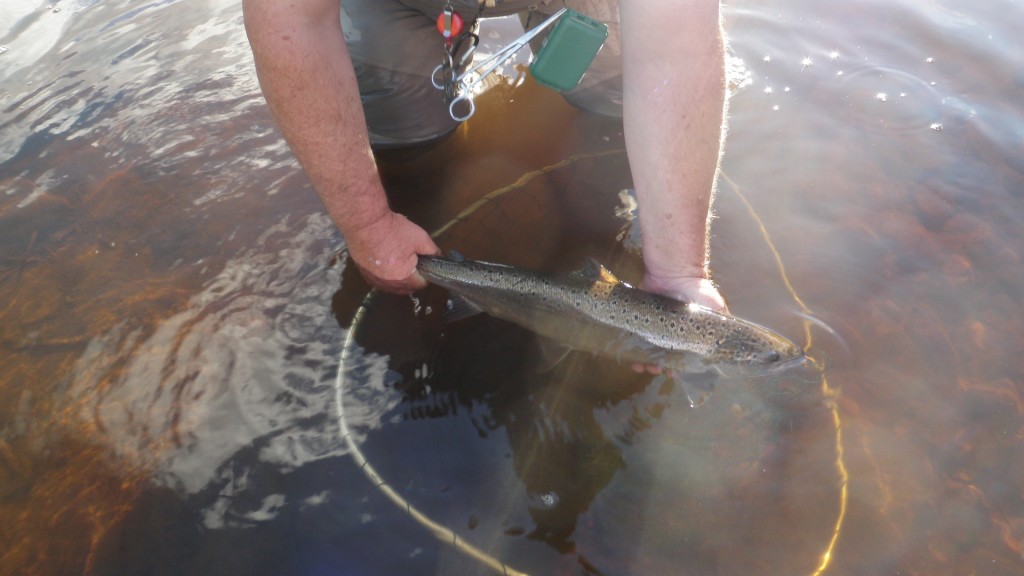 The Miramichi ran a couple of degrees warmer than the Cains most of the time.  None-the-less this trip gets a special note from me as being one of few that I can remember where I had a salmon come to the fly – not necessarily hooked and landed – every morning and every evening of the trip.

Interestingly not one of my fish came on a bomber though I made a few thousand casts with them.  I rolled a few, and completely blew one good take whilst daydreaming, but never got one solidly on the line. 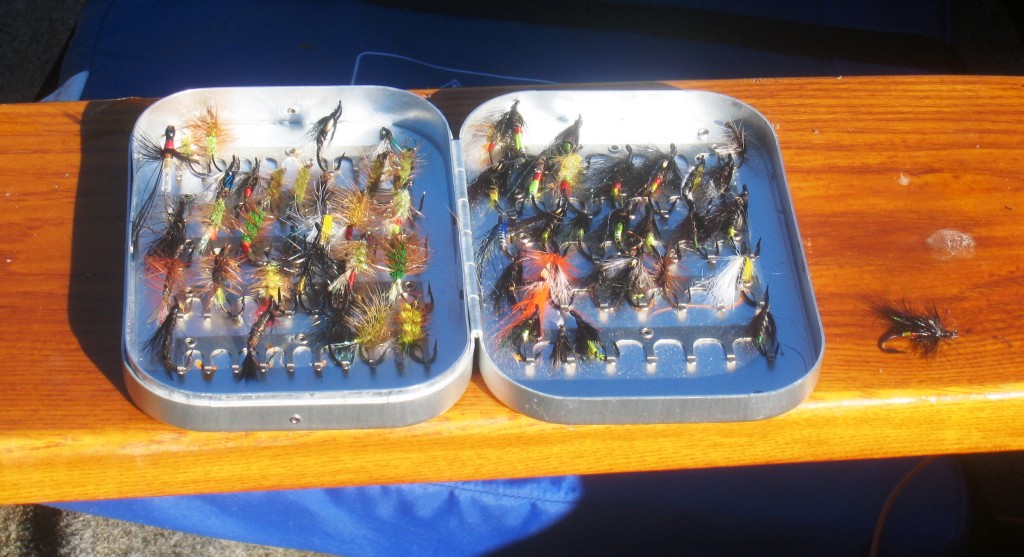 Most fish came on #8 and #10 wet flies and bugs.  Little black stuff like the Black Bear/Green Butt or Same Thing Murray worked as did a tiny, flash-tailed, green machine tied with olive chenille.  The chenille machine accounted for all of last Sunday’s fish.

In order the pictures below are guide Jason Curtis tying on a bomber dry fly to try for a grilse we have risen several times with a wet, Jason another day with a grilse from more or less the same lie, Jim Graul wading Campbell’s Pool, and Canada geese feeding in the backyard.  Geese were only rarely seen passing through in the fall just 20 years ago, but now there is a substantial local breeding population. 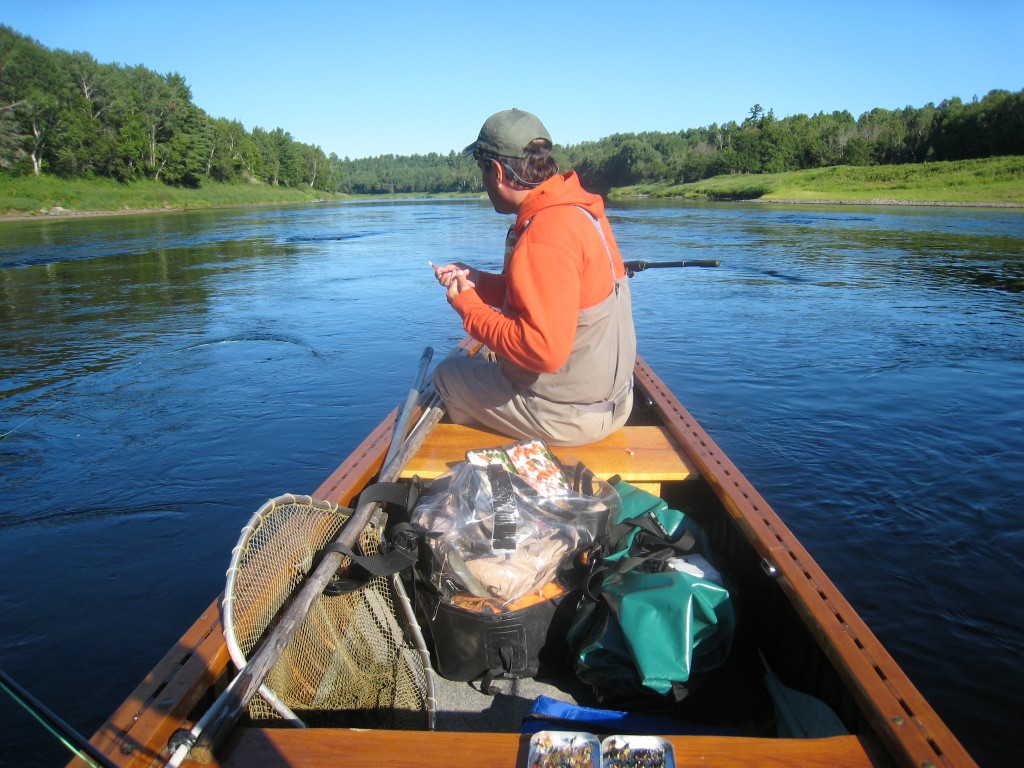 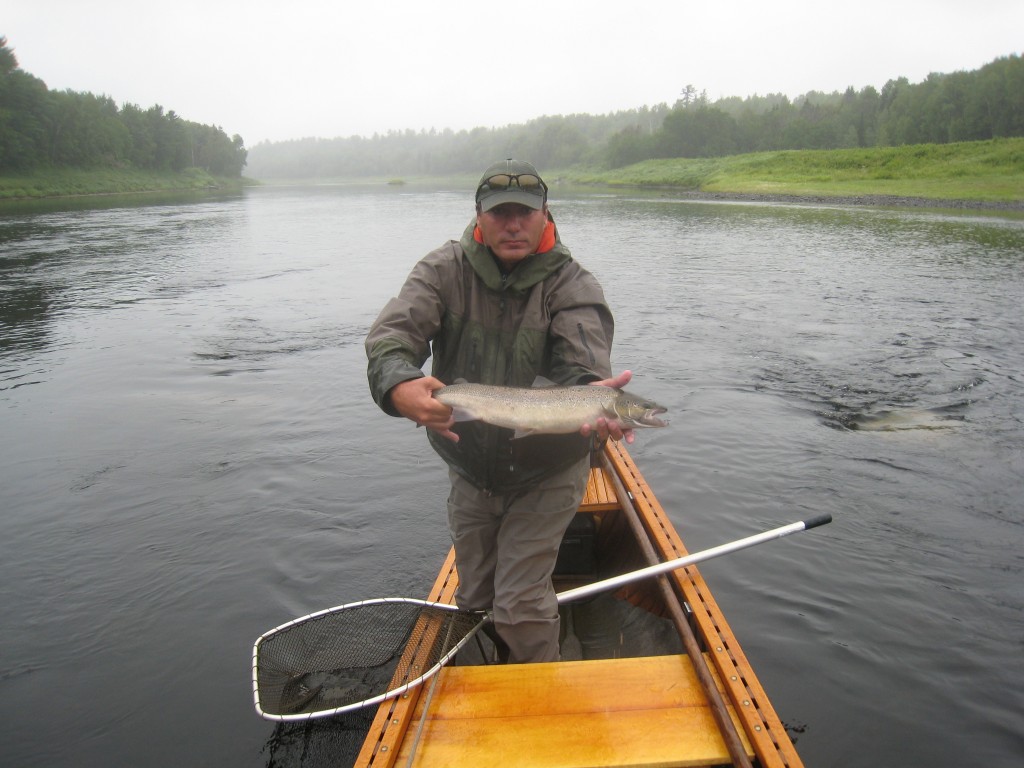 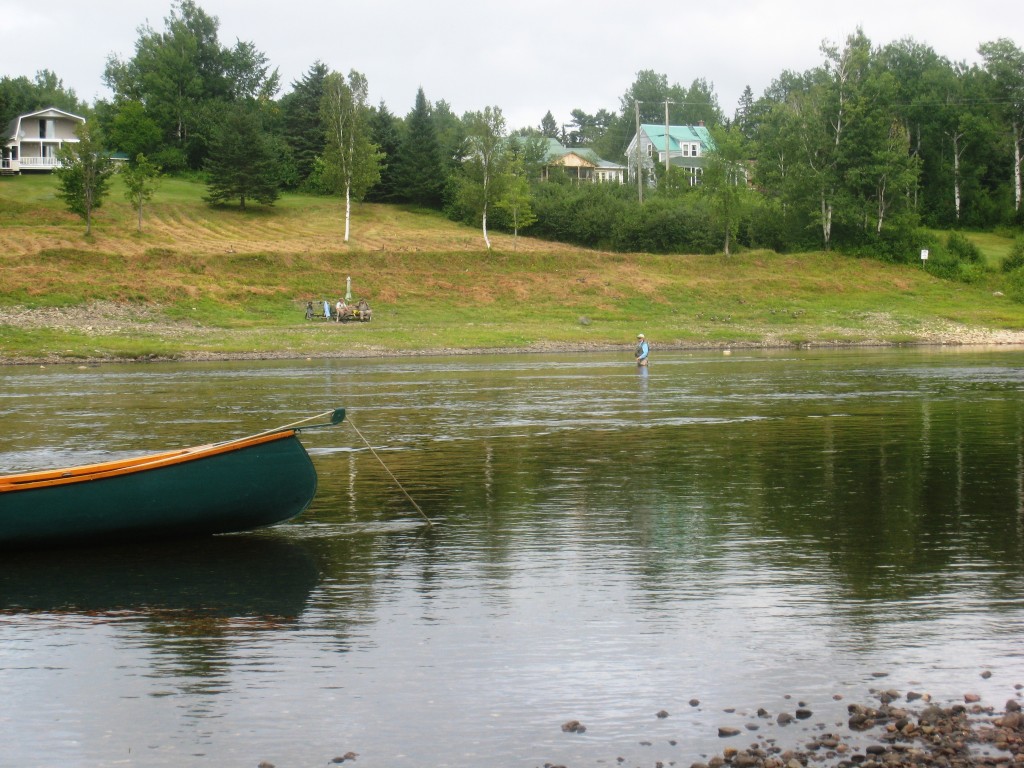 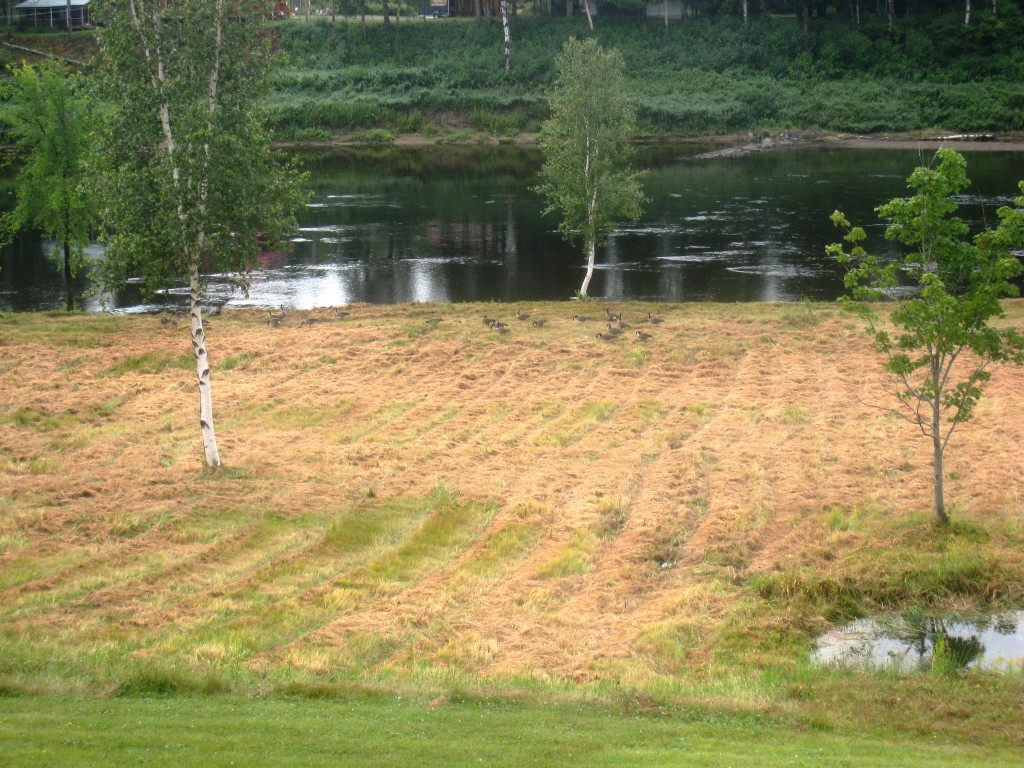 As I post this, up on the Miramichi they are now in the midst of a minor heat wave that will take them into the middle of the week.  Hopefully that will be the last of that for this year.  I won’t get up again until Labor Day, but hopefully we will have a little rain, some cool weather, and begin to see the first of the fall run entering the river around that time.

Click on the purchase tab at the top of this page to order your copy of Closing the Season:  Salmon Fishing In New Brunswick on the Miramichi and Cains Rivers