Final Miramichi Salmon Trap Counts and Timing of the 2022 Run

In the early 1900s outfitter Harry Allen saw the potential of this stretch of the SW Miramichi that contains the junction pool with the Cains flowing in on the upper left, and Black Brook entering from the left in the foreground.

The final 10/31/2022 Miramichi trap numbers for both Millerton on the SWM and Cassilis on the NWM were posted to the Cumulative Counts page of the DFO website today.  Let’s look first at how those numbers compare to other years in an absolute sense and see in what direction the run in recent years seems to be trending.  On the SWM, Millerton ended up with 417 salmon and 554 grilse.  This compares to 305 and 939 last year.  The NWM recorded 208 salmon, up from 168 in 2021, and grilse reached 202 down from 368 the previous year. 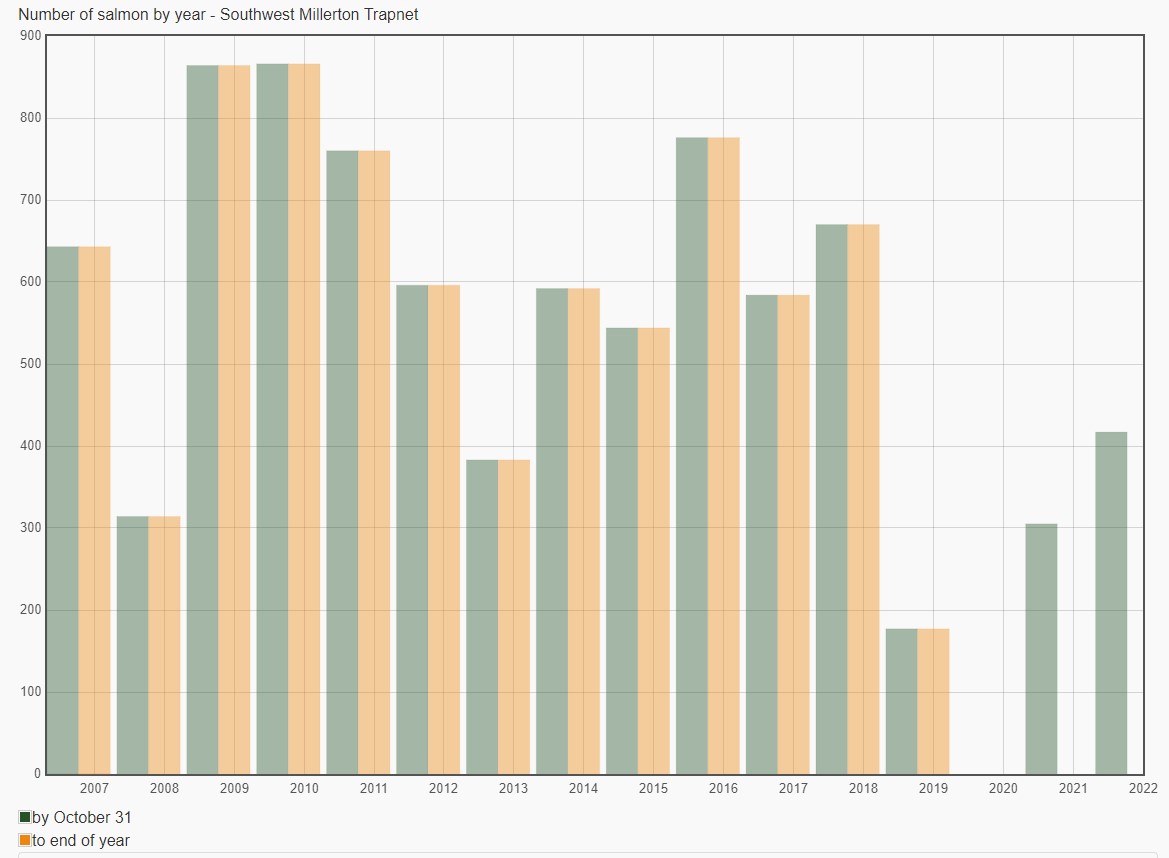 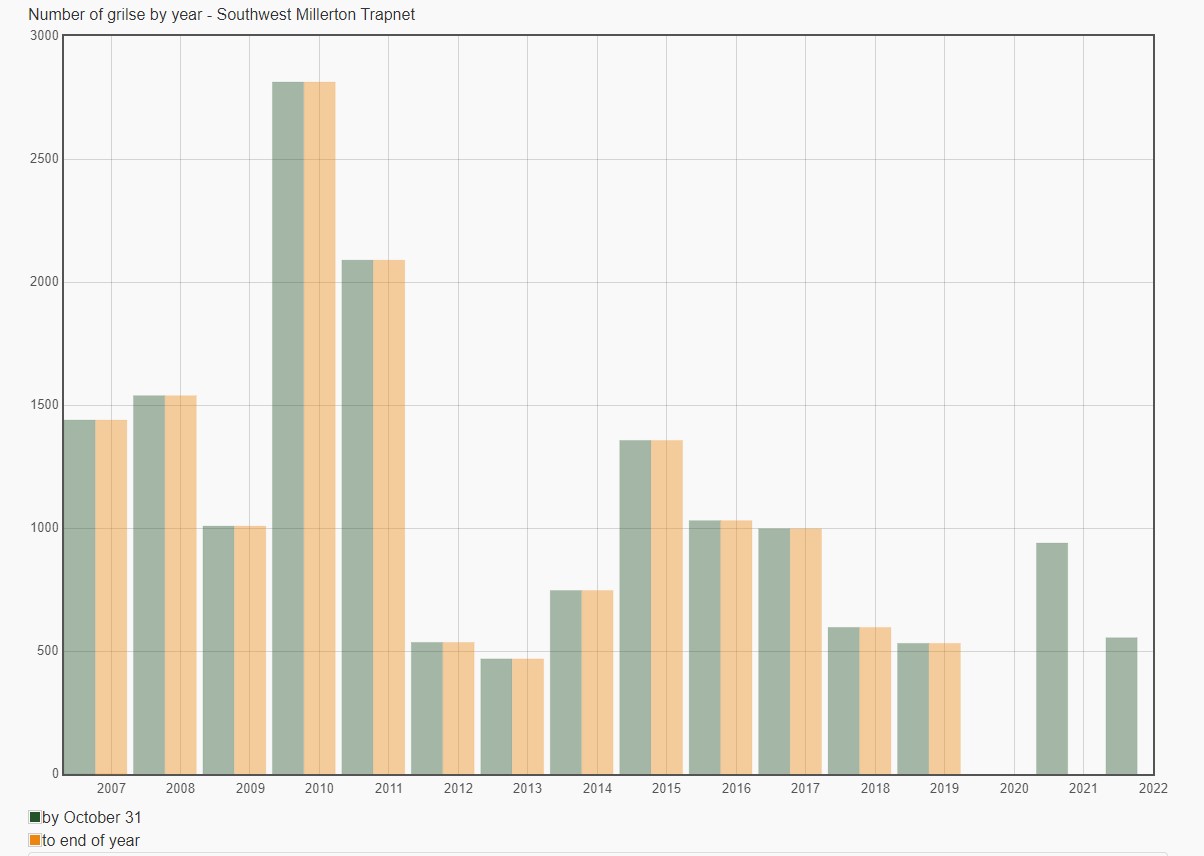 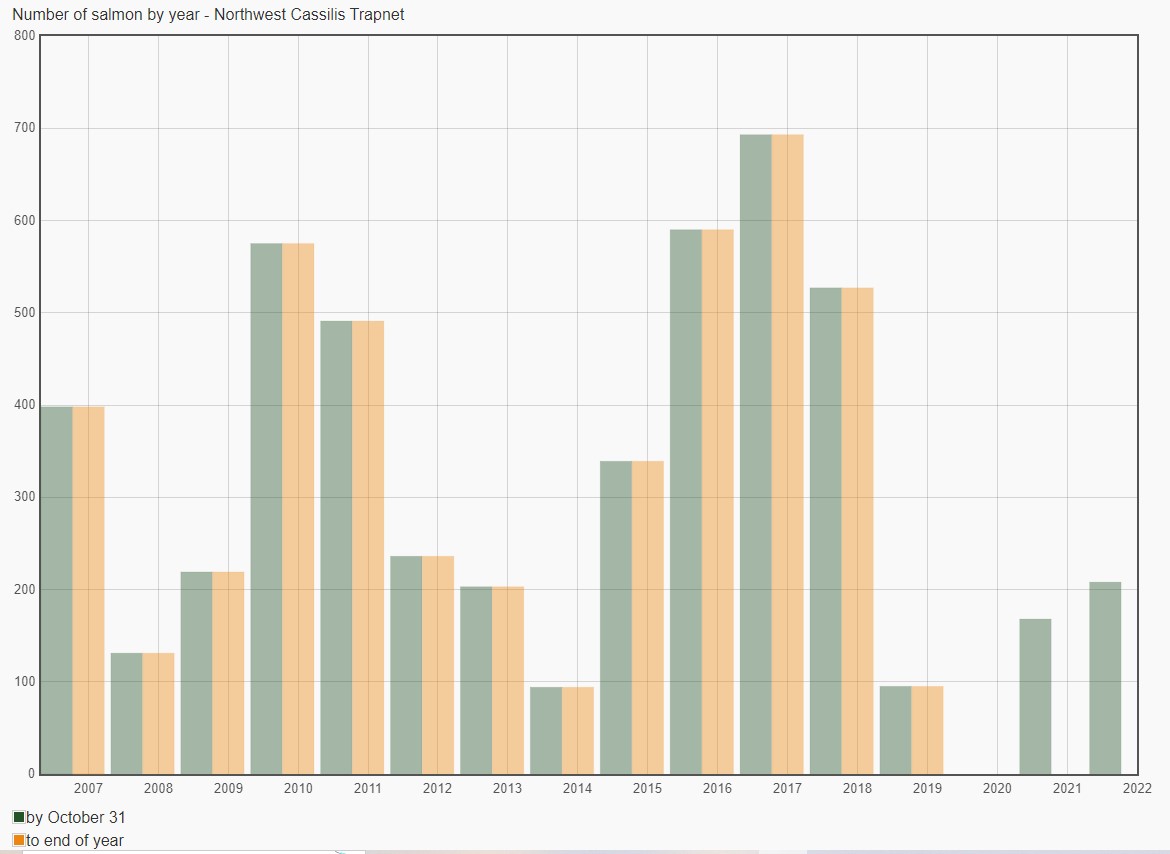 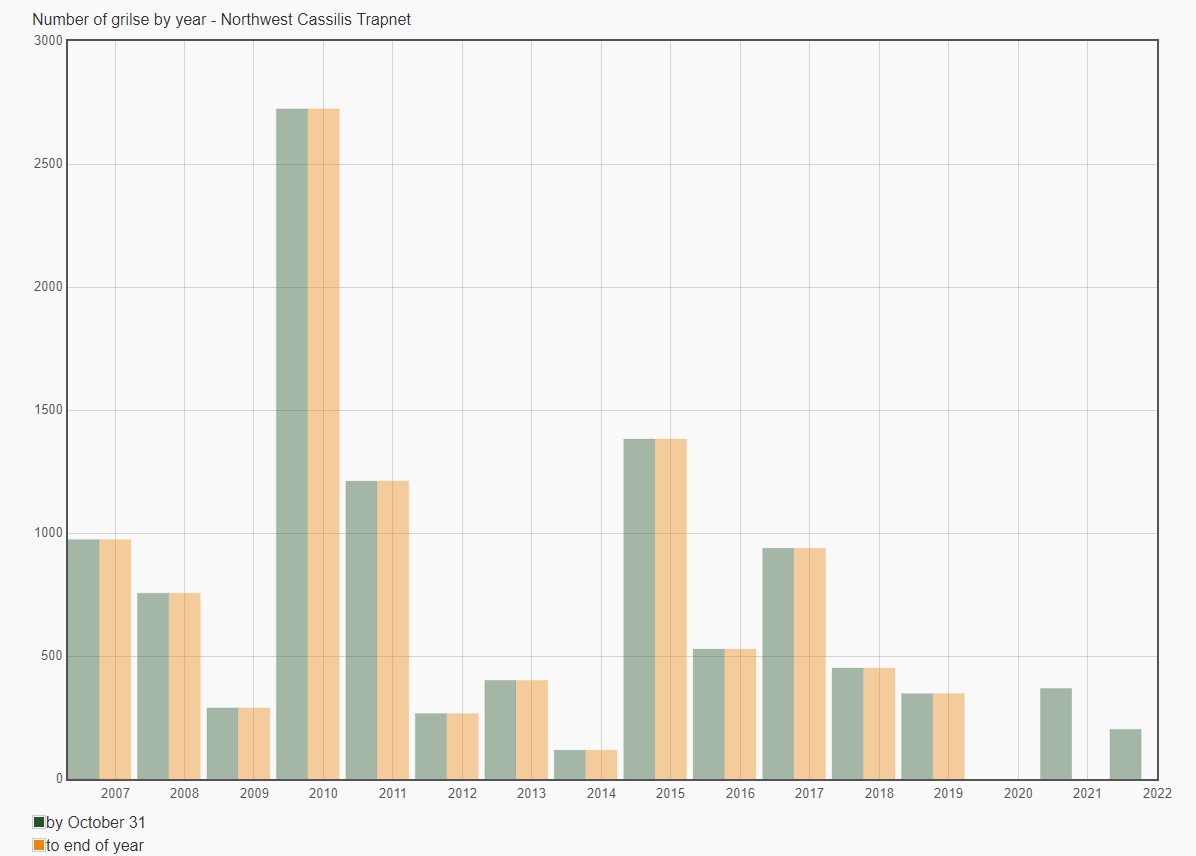 The short of this is that salmon were up substantially over 2021 on both branches – somewhat more so on the SWM – and grilse were down.   It is always important to remember that these are not absolute numbers.  The traps only catch a small percentage of the runs, and they are more efficient at catching grilse than salmon.  By historical efficiency averages it would mean that the SWM had a run of something like 8,400 salmon and 7,000 grilse.  The NWM would have chipped in another 2,300 salmon and 2,000 grilse.  The actual efficiency of the traps in 2022, or in any particular year is variable, and even the official calculation is subject to a very large margin of error.  The actual run could be  materially different than any estimates of the total run.  Very likely the actual counts are higher since we had a lot of high-water flows and the traps are less efficient under those conditions.  It would be a logical question to ask how we could have more salmon than grilse.  After all grilse only have to make it through one winter in the ocean where salmon have to go through at least two.  Salmon numbers are buoyed up, though, by the simple fact that salmon counts include not only those fish returning after two years at sea, but also all of the salmon that have spawned already and are on their way back again as repeat or consecutive spawners.

In summary, using historical average trap efficiencies, the total Miramichi system run for 2022 would be about 20,000 salmon and grilse.  This is way down from the 100,000 or so that were often seen 25 years ago – let alone the 500,000 or more that occurred back in the 1960s – but they are off the lows of a few years back, and they are still more than double the counts of rivers like the Restigouche or the Cascapedia.

If one looks at the graphics for both the Millerton and Cassilis traps that I posted above, you can see that salmon had their third consecutive yearly increase since the sharp bottom in 2019.  I’ve never heard anything like conclusive scientific opinion of why we fell off such a cliff in 2019.  Was it striped bass hitting the smolt run just right in 2017, bad conditions at sea in the winter of 2018/2019, or poor spawning conditions back in the Miramichi during the winter of 2015/2016?  I don’t think we will ever know the answer to that question.  There is no bar in the graph for 2020 due to Covid, but anecdotally we have lots of information that it was a good year.  I don’t think it would be much of a reach at all to say that there are good odds that we are in something of a recovery mode for salmon numbers.  Grilse numbers have clearly been much more variable, and this must in part be due to their total dependence on a single year class.  The grilse numbers in 2022 were not great, but they were not close to new lows, and the previous year’s run was the best in some time.

My perception of the 2022 salmon run on the SW Miramichi goes more or less as follows: 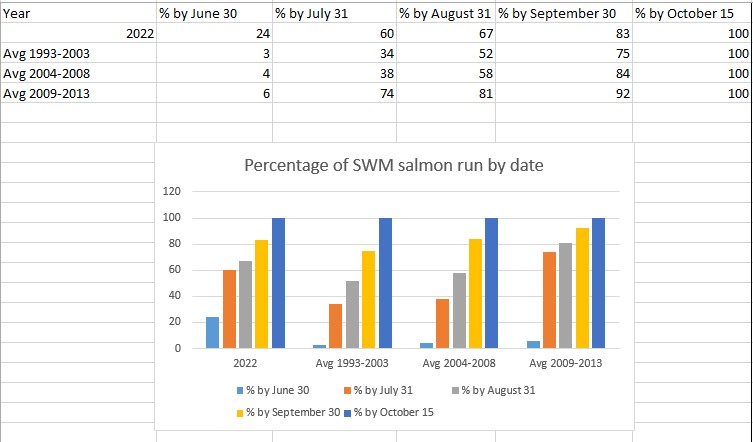 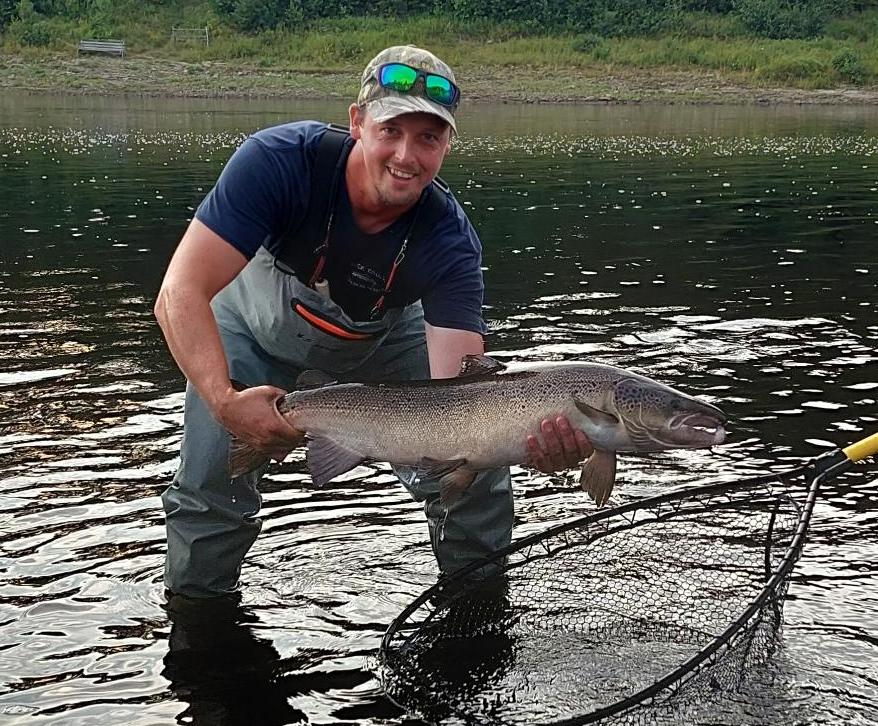 A fine salmon from Black Brook just as August turned to September.  By its color it had been holding in that pool for a while.