Fishing Friends –
Your salmon fishing schedule for 2020
Have you planned your Atlantic salmon trips for 2020? I have, almost, but I’m leaving a couple of things open. I’ll start on the River Naver in Scotland during the first two weeks in March as I have for each of the last 10 years.  This early in the season it is never fast fishing, but I usually manage a couple of bright fish each week, and some of these fish are extraordinary specimens.  Next I’ll go to New Brunswick in April for some kelt fishing on both the Miramichi and the Cains Rivers. 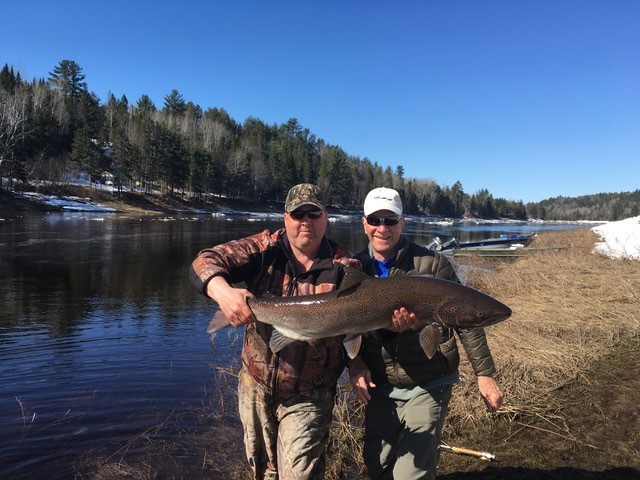 Eddie Colford and Rip Cunningham with a great kelt from near Black Brook.

I’ve gone back and forth on kelts over the years. Certainly it is not to be confused with bright salmon fishing, but it can still be very exciting, and it is a chance to be out on the river and extend the season. Now that the salmon population is a little lower than it was I find that I have to work harder for my fish, but I think I actually enjoy it more.
In June it will be the Miramichi for sure, and I will keep at it there until the middle of July unless conditions get too warm. I have found that the June fishing has held up better than any other part of the season. Our daily June catches are more or less on a par with fifteen years ago, and the fish are always superb specimens. One evening late last June I hooked four salmon in a little over an hour. These were all double digit fish. I’m not sure where you would go to do any better than that. I was in touch with Byron Coughlin of Country Haven many days during that time. They were fishing a few miles upriver from our location, and they were doing better than we were. Sometimes those early fish seem to slow down and take better once you get above the mouth of Cains. 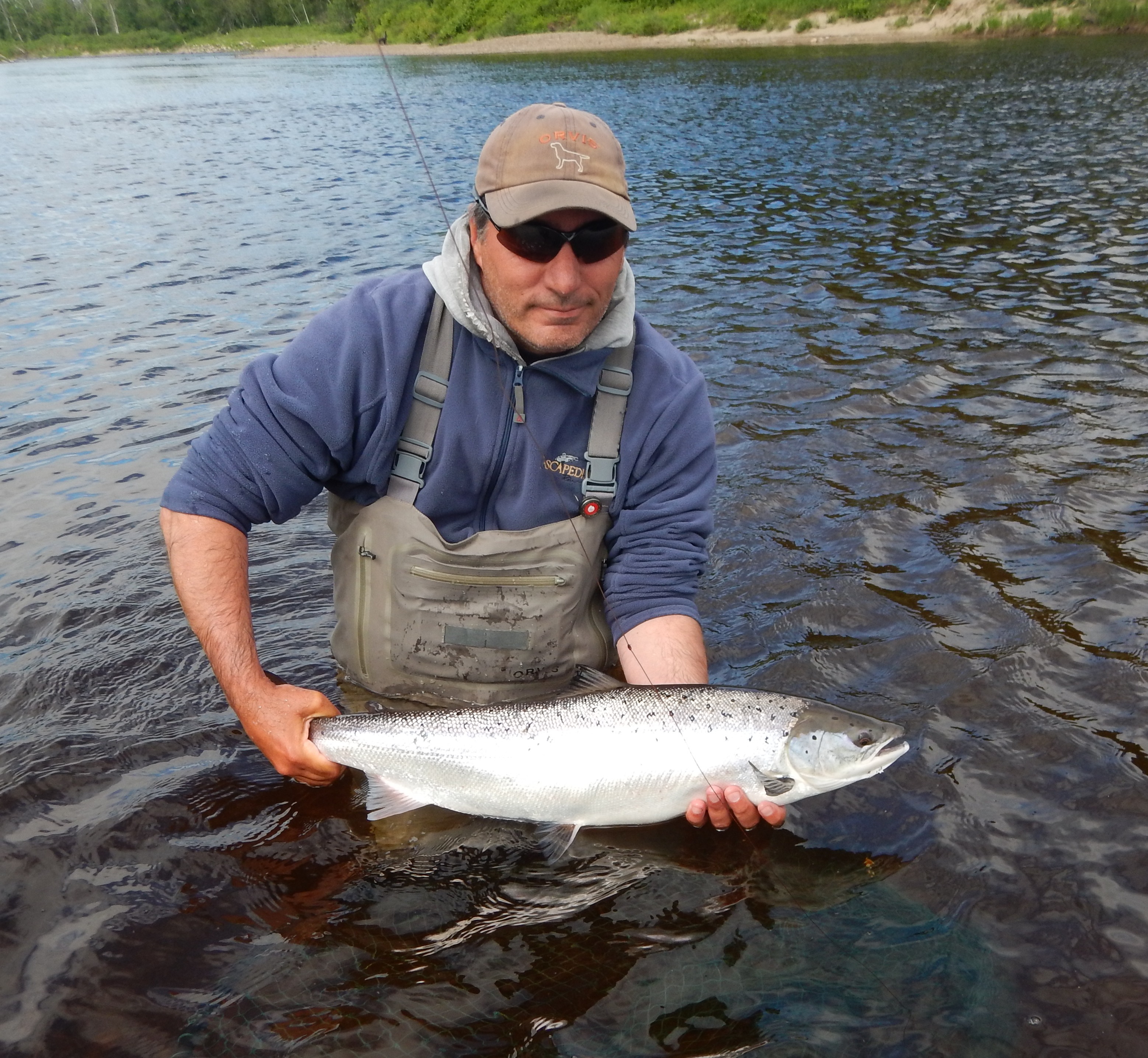 Jason Curtis holds one of four hooked one June evening in 2019.

In August I have been invited on a trip to the George River in Nunavik – the native controlled region of Northern Quebec – and sometime in late July or early August I’m still hoping to make a trip back to Newfoundland. Beyond that I’m going to watch the weather carefully. A cool period combined with a good rain can create terrific fishing on the Miramichi or lower Cains. In the last few years it seems that the end of August has fairly consistently produced an end to summer heat and enough water for some very good fishing. I can’t just stay at camp all summer – attractive as that sounds to me – so I’ll have to choose my times and run up when things look good.
In the fall there can be no question that the Miramichi and later on the Cains River are where I plan to be. We had salmon almost every day of September last year. October is normally our very best month on a fish per day basis, but despite great conditions last year was an exception. Certainly a lot of fish did go up a little earlier with some of the mid-September rain, and perhaps this year things will be back to more normal. Many of those Cains fish are large salmon, and the reduction of the Greenland fishery in 2019 has to help. After the Cains closes on October 15 I’m pledging to give Nova Scotia a shot. I have been hearing so many good things about the Northumberland Shore Rivers that if conditions are any good – they were terrific in 2019 – I have to give that a try. 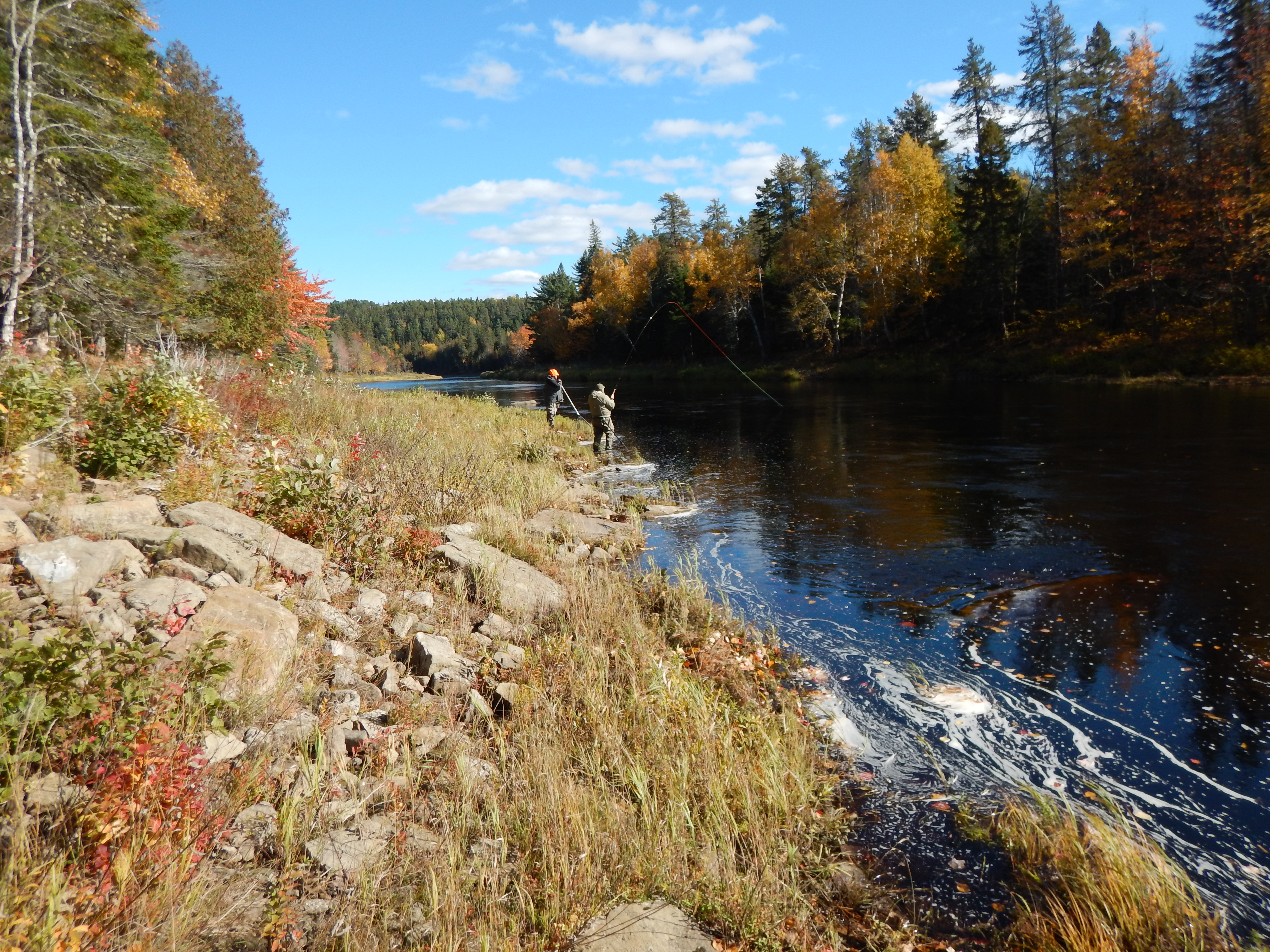 Hard to beat the beauty of the Cains River come fall.

So how about you? If you have a hole or two left in your schedule for 2020 then I have a few ideas for you. In the next few paragraphs I’m going to show you the salmon fishing trips that we are offering in an auction to benefit the Miramichi Salmon Association that will begin on January 31 and run until February 16.
Spring Fishing
• Wilsons Sporting Camps – we have two days of guided fishing for two anglers and three nights of self-catering accommodations at Wilson’s excellent facility in McNamee. The last couple of years Wilson’s has had exceptional spring fishing on one of the largest stretches of private water on the Miramichi system. A range of mutually agreeable dates are available.
• Jason Curtis on the Cains – this isn’t really a spring fishing trip, though it will include some. Jason is going to take one or two anglers on a tour by jet canoe from the Mouth of Cains area up to our camp at Mahoney Brook for our traditional barbecued, hot dog cookout lunch, and then back. This will be a lot of sight-seeing and history, plus you can fish Jason’s favorite pools to see if any kelts are home. This should be taken in late April or early May while there is sufficient water for an easy trip.
• Brook Trout with Keith Sabean – one or two anglers – your choice – will arrive at Mahoney Brook the afternoon of Saturday May 23rd, fish some of the excellent pools near the camp, have steaks on the grill (cooked by yours truly) a night in the lodge, and then head downriver the next morning fishing a variety of renowned pools including Six Mile Brook and Moores, until finally taking out at the site of the old Cashen’s Cabins in Shinnickburn. 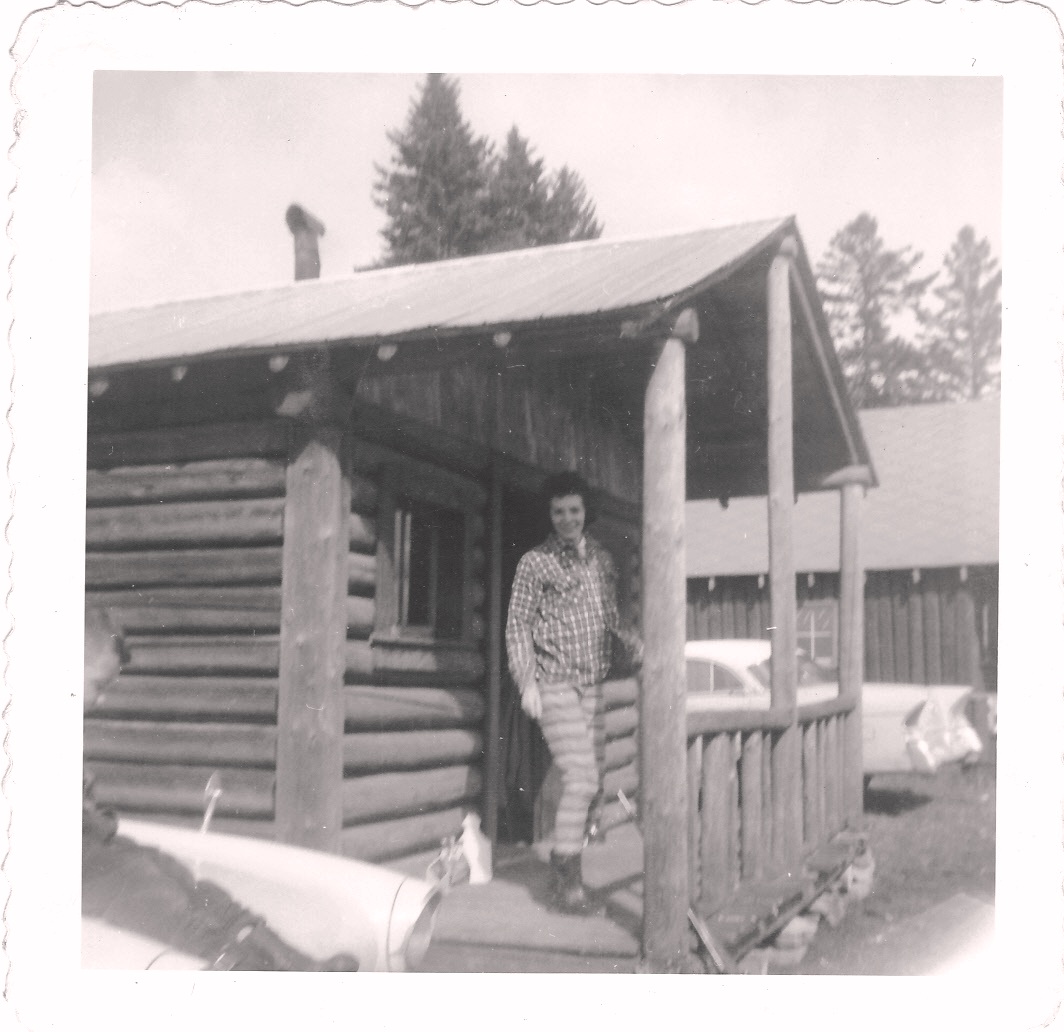 Summer Salmon Fishing
• Black Brook Salmon Club – without question BBSC’s pool is one of the higher producing stretches on the  the Southwest Miramichi. Great numbers of salmon hold in their brook-fed home pool during warm summer periods, and often they are just enough happier there to produce good fishing when very few other camps on the river are doing anything at all. BBSC’s water would still be excellent even without the brook since their home pool is located at the junction of the Cains and Miramichi Rivers. Many fish will hold there for a raise of water to encourage them to undertake the rest of their journey. We have two three day trips here each for two anglers, and the meals and facilities which are included are among the finest on the river? Any unscheduled dates on the BBSC calendar are available for this trip. Certainly some of the prime weeks will already be taken by repeat guests and club members, but every week at this camp has the potential for excellent angling. 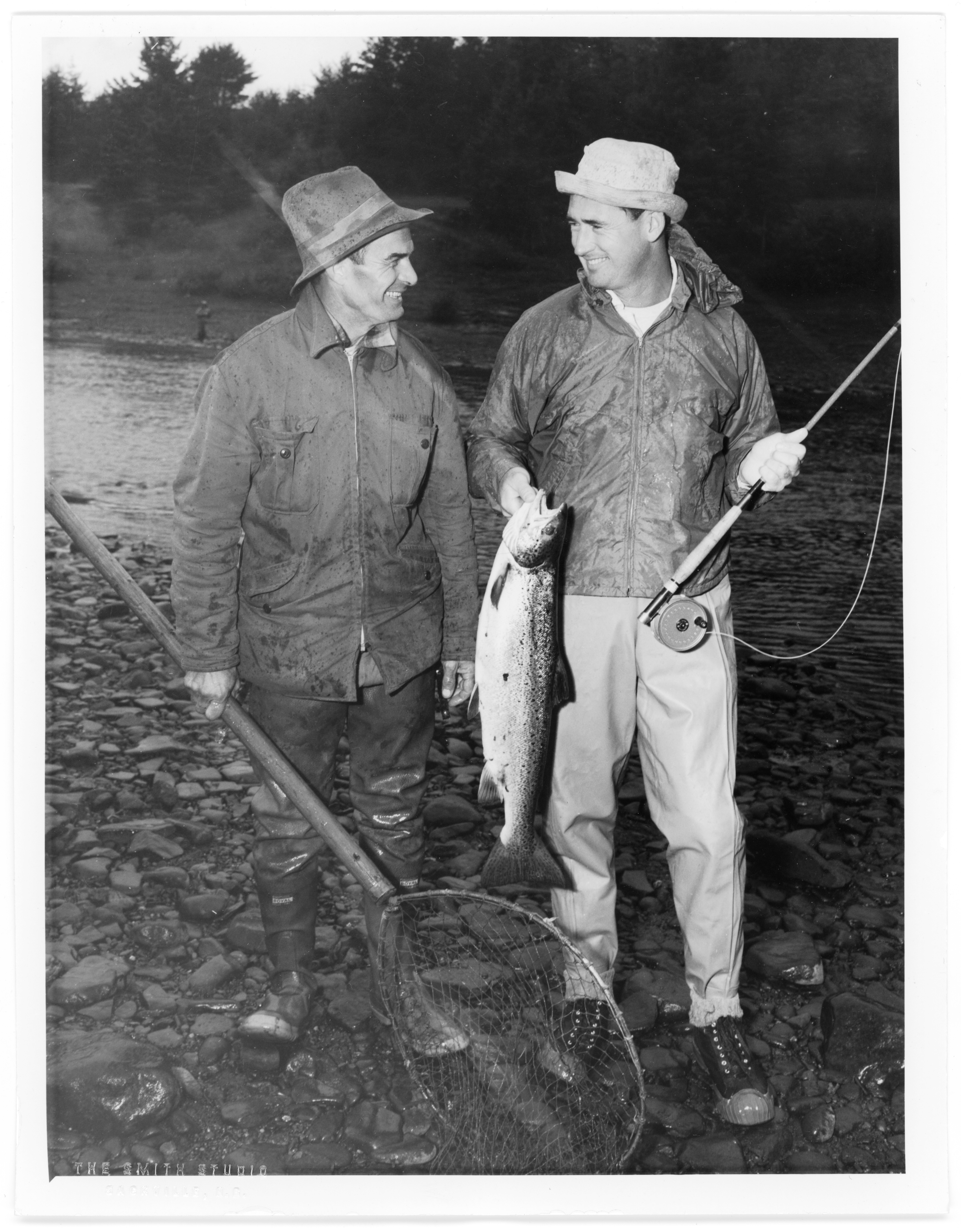 Wendell Allen and a young Ted Williams with Black Brook flowing into the Miramichi in the background.

• Ted Williams White Birch Lodge – who wouldn’t love to fish in the footsteps of baseball great Ted Williams and his friends? I know that I would. We have three days for two rods courtesy of the current owner, Joe Walsh. The lodge and Joe were written up in some depth during my last blog post. In addition to Ted’s great pool in the Rapids the winners of this auction will also have access to the lodge’s Morehouse Pool in Blissfield. You will be guided by Clarence Curtis who took over for his late father Roy in guiding Ted during his last years at the lodge, and has been the guide and caretaker at White Birch for 30 plus years. All meals and accommodations are included.
Fall Fishing
• Doctor’s Island, Campbell’s and Keenan’s – fishing is for up to 4 anglers on the dates of September 4, 5, 6 with self-catering accommodations on the night of the 3rd also included. You will be guided by the very capable Jason Curtis and Darrell Warren and fish some of the best pools in the Blackville area. Both locations have excellent low water pools which can be very important for good fall fishing.
• Closing the season at Country Haven Lodge – Country Haven has access to some of the best water on the Cains River, and owner Byron Coughlin was gracious enough to put together one incredible trip. This is for two anglers on October 13, 14, 15th, the last three days of the 2020 season. The Cains run will be at its peak at that time. This is a real opportunity to fish some of the finest salmon water in the Province at what is arguably the loveliest time of the season.
Check out all the details of these trips along with other auction items at this link. If you have any questions about anything just shoot me an e-mail at bigbass@maine.rr.com and I’ll do my best to help.
February 22nd Dinner to benefit the MSA
On Saturday Feb 22nd my wife June and I will be hosting a dinner party at our home in Falmouth, Maine to benefit the MSA. This dinner will replace the event in Burlington, MA that will not be held in 2020. A brief symposium will precede the dinner, and Mark Hambrook, president of the MSA, will speak on issues effecting Miramichi salmon, and what the MSA is doing to try and improve the run. Also, David Roth of the CAST program will make a presentation about the current status of the CAST research and experiments. A fun evening of dining, drinking, and salmon talk will follow after the symposium.
We still have openings for this event, so please contact me at bigbass@maine.rr.com for more information or to reserve your seat or seats. I would add that a number of wives – fishers or not – are also planning to attend.
Thank you. Brad Burns