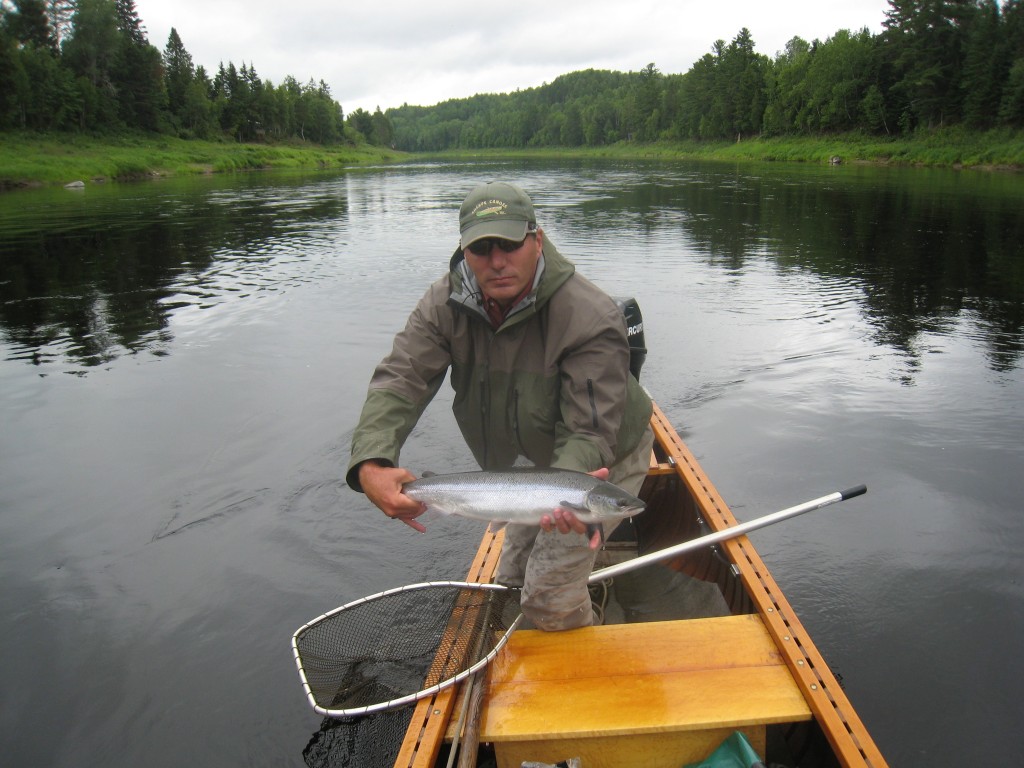 I got back on Sunday from a  week of fishing on the Miramichi and Cains Rivers.  The Cains River season is just starting, in fact we may have caught the first fish on the Cains for the year.

When I arrived on Sunday a heat wave had just ended and in it had rained, and then it rained even more that evening.  The river cooled down from the mid 70F temps that had stopped fish from entering the river and that drove all the fish already inside to look for cold water refuges.  Some of the larger cold water holding pools were – in the words of Jason Curtis – like aquariums, filled with fish.  See the picture below of a typical Cains River cold-water brook that attracts fish during these conditions. 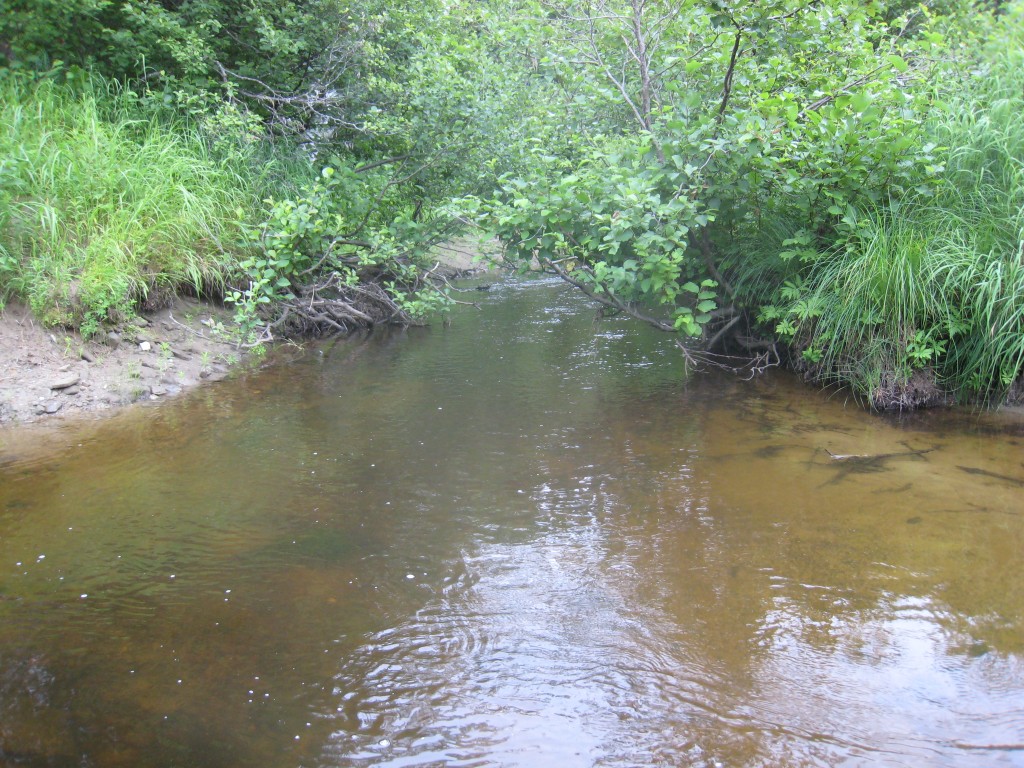 It is commonly known on the Miramichi that when the water begins a decent raise an increased percentage of the fish in a pool will take the fly.  These are fish that had previously been stale and refused nearly all offerings.  Places like the Black Brook Salmon Club and Mountain Channel which have deep, cold-water holding pools downstream of a rapid run of taking water found themselves in terrific circumstances and had a banner day on Monday 7/20.  As these fish began to leave the pools and combine with a few incoming fresh fish most pools enjoyed some level of success.  Dry flies like the bomber were the order of the day.

The week was cool and showery and ended with a height of just under 1 meter on the Blackville gauge.   That is a good level of water for late July and allowed the salmon entering the system an easy pass to swim as far up the system as they desired to go.  The salmon took advantage of the good water, and as a result a lot of fish were seen, but catching many of them was tough.  I heard from Byron Coughlin of Country Haven that this was also what his anglers were seeing in the good variety of pools that they fish on the Main South West Miramichi.

On Tuesday we made our first trip up to a cold-water pool on the lower end of the Cains River.  This spot is less than three miles above the junction of the Cains and Miramichi.  While the Cains has a well-deserved reputation as a fall river with the peak of its runs coming from 9/15 to the end of the season, the pools in the lower few miles of the river do begin to stack up with fish as early as late June depending on the year.  These fish will hold in the lower beats until the fall rains draw the fish up towards the headwaters.  On Tuesday, though, I was fooled and didn’t see a single salmon in the pool.  Wednesday morning July 22, though, with more rain and cool temperatures I found a decent showing of fishing rolling here and there in the pool.  I landed only one and touched a couple more, but fish were in the Cains!  Two friends arrived on Wed. evening, and over the next few days through Saturday one or two of us fished the Cains one session each day.  We always had some action and we saw increasing numbers of fish.  In fact on Saturday morning we saw the kind of big-ole cockfish that the Cains is famous for launch himself from the deep slow holding water and thrash for a second or two on the surface of the pool.  This was a certified, circa 30-pound animal, and it sure held our attention.

With the exception, though, of fish leaving the cold water holding pools on Monday the fishing for us and others we talked to was not exceptional.  The run of fish, however looks good, and I have good reason to hope that our fall fishing this year will be more like historical levels since autumn is when the lower river pools really show their stuff.

Below is a small but lovely public pool in the lower section of the Cains River. 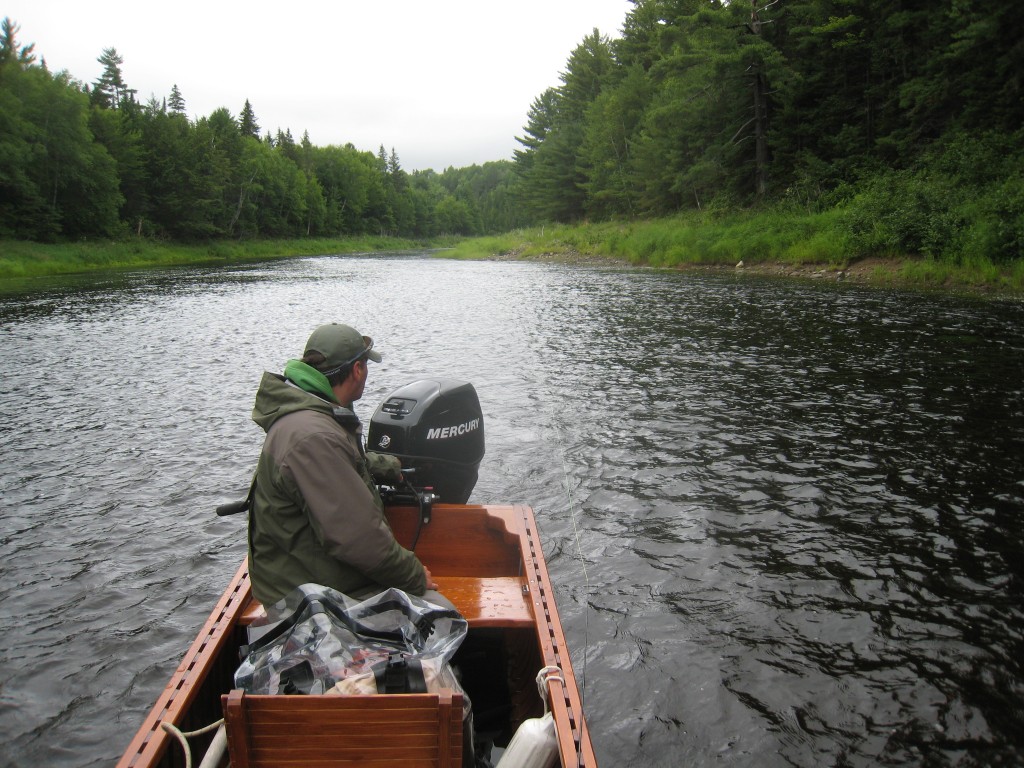 The picture at the top of the page is of a fresh, fat Miramichi grilse from a small spot on the main river just downstream of where the Cains comes in.  It wasn’t a big fish, but it was a great fighter.  I like the shot because it shows what a wild and beautiful place that, for the most part, the Miramichi still remains.