By the 10th of May the black salmon season is winding down on the Miramichi.  A few well-mended kelts are still taken down towards the estuary, but for the most part the best fishing is over.  The first of the sea run brook trout begin to show up in the lower-river, and in recent years there have been a lot of striped bass there too.  Trout and salmon anglers don’t have long to wait though.  While it is not a fishery I have personally participated in, I do know that the first bright fish are normally taken on the NW Miramichi.  Willie Bacso and Jason Curtis used to begin daily trips over there from Blackville beginning around the 20th if conditions looked good.  Looking good would mean that you couldn’t still be in a roaring high-water spring freshet, though an abnormally cold spring with water temps still down in the high 30s or low 40s wouldn’t be good either.  If spring was progressing normally, though, Jason and Willie would often catch both bright salmon and large sea-run brook trout during the last 10 days or so of May. 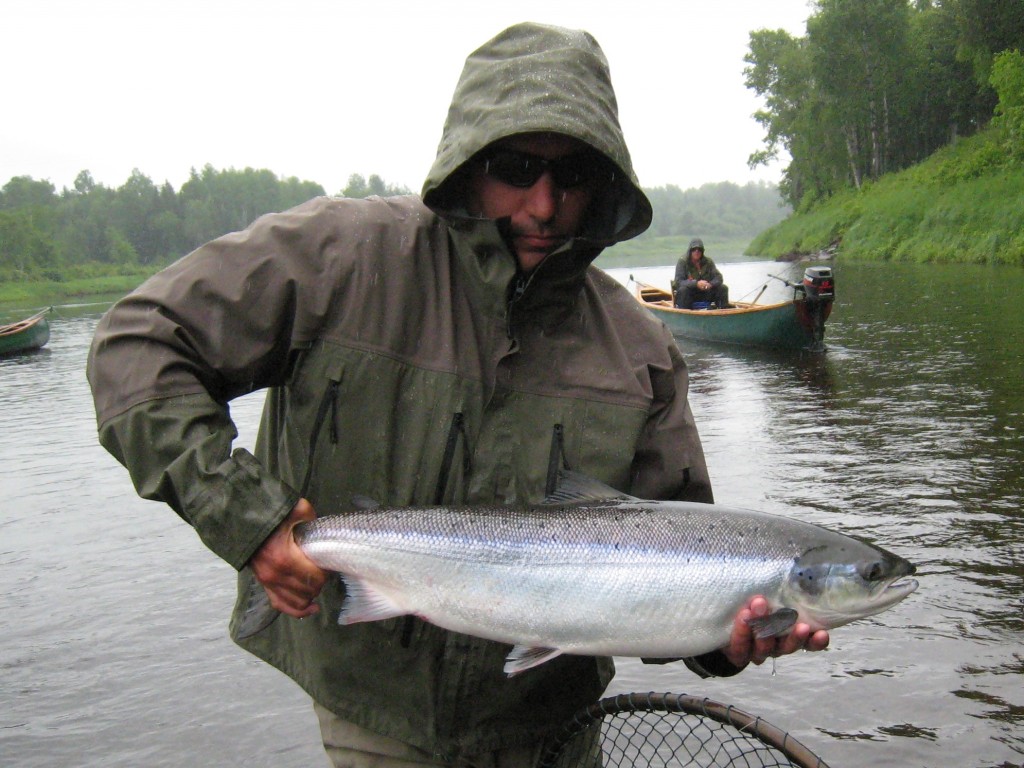 A fine June salmon from the great year of 2011

On the Main Southwest Miramichi you just don’t see many salmon caught in May. In fact I remember that in 2010 Jason Curtis caught one a few days before Memorial Day.  It was the first May salmon that he had ever caught on the MSWM.  He repeated that again in 2011 and 2012, but not since.  I caught a great fish over at Keenan’s on 5/29/2011, but have not done it since.  Willie used to say that by about June 10 there were always a few to fish for.  That is probably early enough to plan a trip with a realistic chance of catching a salmon.

The early run fish, though, have a great mystique, and their relative scarcity compels one to try for them. It is the same in the Old Word.  People from all over Europe and for that matter North America flock to Scotland in February and March for a first crack at “springers”, the local name for fish that arrive before it is full summer.  In many of Scotland’s northern and eastern rivers some bright fish arrive every month of the year.  When their seasons open around the first of February there are a few fish already turning a shade of pink in some of the better holding-pools.  Check out the Fish Dee website around the first of February and see what a celebration is entailed with the opening day on the 2nd.  Every beat is booked with folks hoping to catch an early bright fish.

With similar enthusiasm and hope some of my fishing friends and I approach Campbell’s and Keenan’s on the Miramichi in late May or early June. From time to time we are well rewarded with a great fish, but more often than not we have only fish stories and good fun.  From the first of June onward the season is a fairly steady though entirely unpredictable progression of more salmon.  Most years by the last week in June there are a dependable number of fish in the Miramichi system, and during a day on the water you will at least see a few fish.  Statistically, though, it is the first week in July that ushers in the heart of the summer run.

So what is different about early June fishing from mid-summer fishing, and what is the best strategy to make the most of the opportunities that do exist? Opportunities, with the addition of the adjective fleeting, best describe most early and mid-June situations.  Fish do not come into Campbell’s Pool during June – some 14 miles above the head of the tide – and lie there until spawning time.  The water in early June is cold and relatively high, the fish are fresh from the sea.  The situation is ripe for salmon to simply run the river.  As I’ve seen many times, though, salmon – and they are almost entirely salmon and not grilse before the middle of June – will stop at an attractive lie in the pool and hold there – often showing occasionally.  It is a fleeting opportunity that you must make the most of.  The fish may hold for five minutes, or it may be an hour or two, but it won’t last.  The sooner you arrive there and cover that fish the better your chances of catching it.  Concentrate on those areas where you catch a fish, roll a fish, or see fish.  In general the same parts of a pool will provide most of the activity in any given conditions. 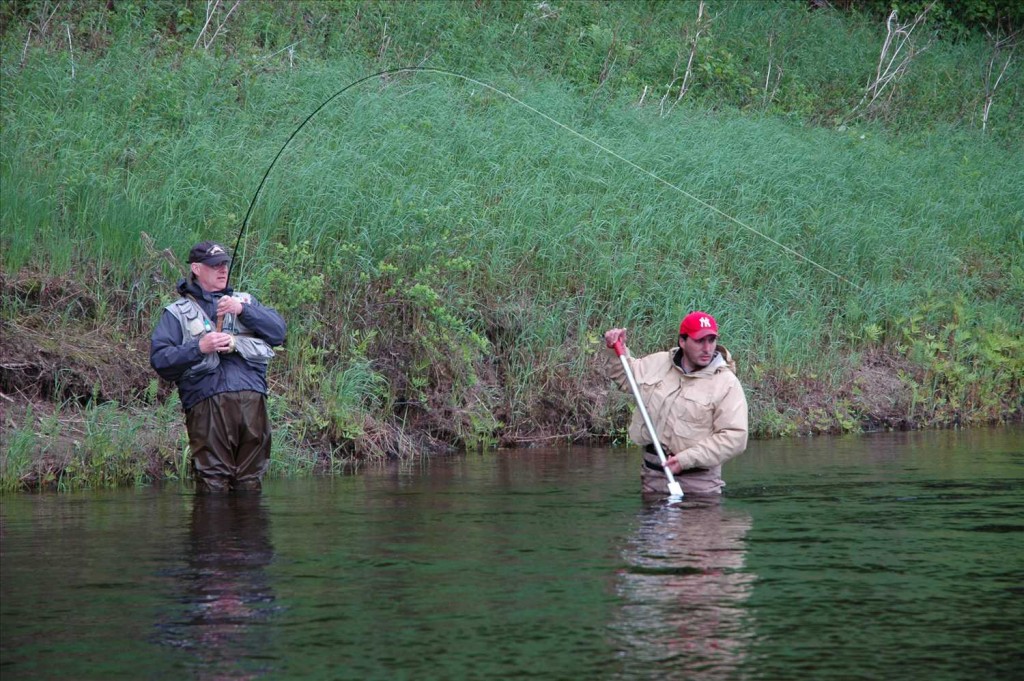 Hooked from the canoe in high water. Jason landed on the Keenan Bar to net.

Strategies for early June salmon on the Miramichi:

Jason Curtis guided Ralph Vitale to this wild late June fish that was holding in a likely location.

Unless the water is unusually low and warm you should fish a fairly large fly in June. Grilse will take a three-inch streamer just as salmon will, so don’t worry about the fly being too large. That said I never fish the Miramichi with anything larger than a #2 hook, mostly because if I do hook a fish I don’t want to do any severe damage. 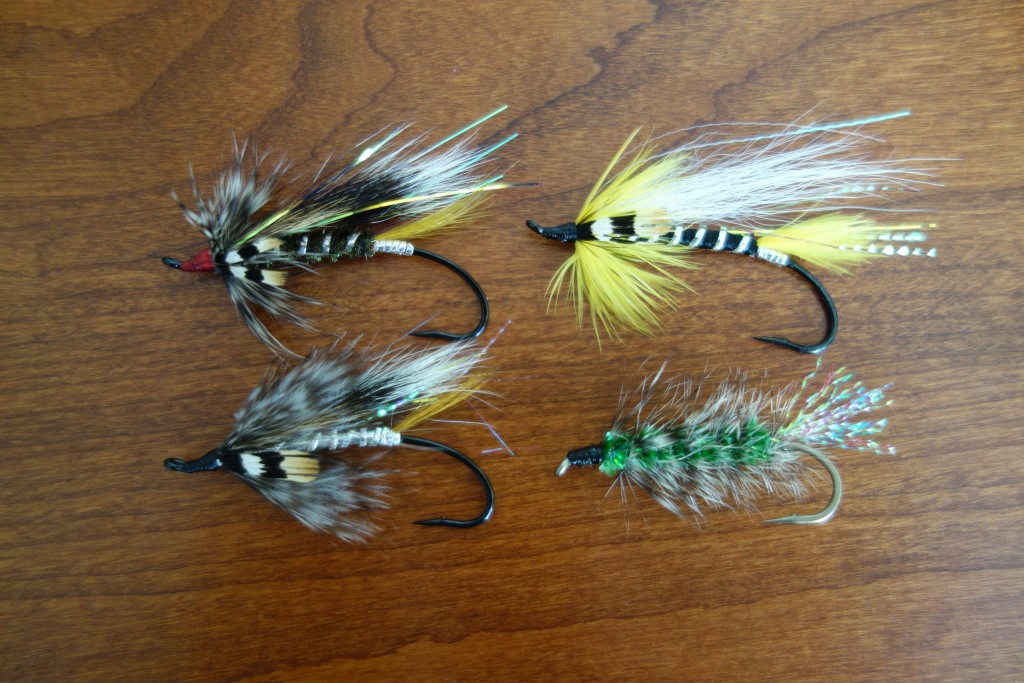 It is a fallacy to think that all early fish are so hot that they will take every fly instantly. I’ve had some of my most disappointing refusals from large, early salmon. The more times you roll one of these fish the less likely it is that it will eventually take. Try something different. Usually, if I roll a fish I cast right back with the same fly and the same cast. If the fish doesn’t solidly take the fly I then repeat it all except that as the fly approaches the fish I give it the “Gaspe pump” which means that I hang my rod arm down and swing it back and forth moving the fly through the water in a pulsing motion. This simple technique has put many salmon on the line for me at all times of the season. 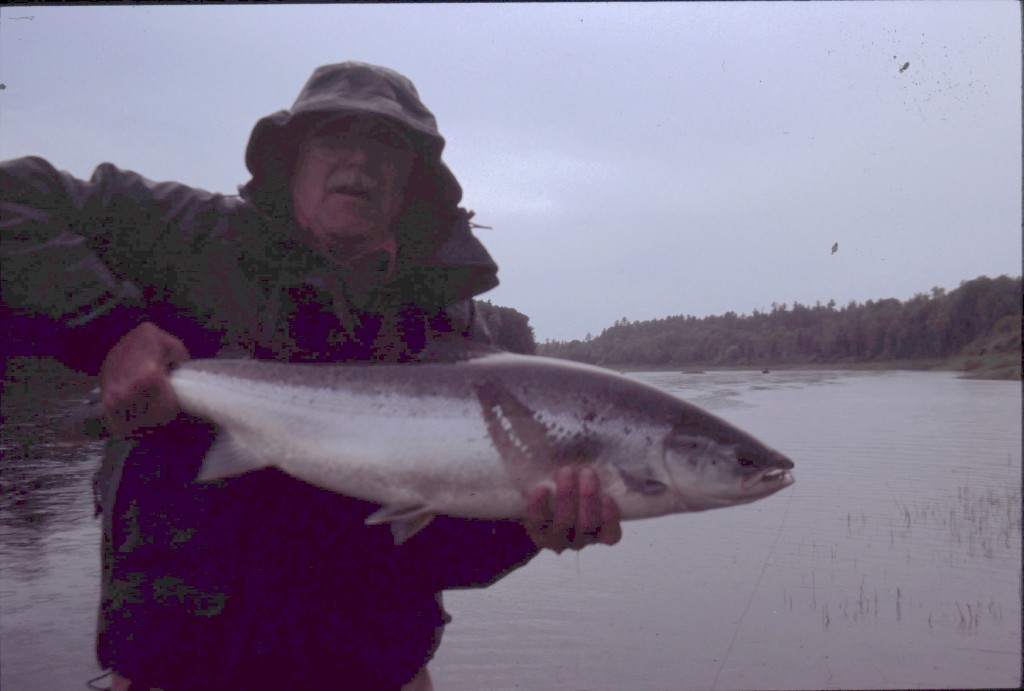 Just look at that incredible body shape! This is an energy-packed, June salmon.

There can be some really big fish among the early arrivers, and the fish are all in excellent shape having just arrived from the winter feeding grounds off Greenland. Look at some of the pictures I’ve included.  You just won’t see fish in late summer or fall with that high, muscular back and general tuna-like shape.  That doesn’t mean, though, that you need anything that exceptional for tackle.  You also do not need – or want – a thin tippet or an extra-long leader.   I do most of my June salmon fishing on the Miramichi using a 12-pound test tippet.  With the 15’ Spey rod I will often use 15-pound test just because of the extra shock applied to the knots when yanking a large fly out of the water.  Fresh 12-pound Maxima with good knots is nearly impossible to break while fighting a salmon unless you point the rod straight at the fish and clamp both hands on the spool of the reel.  It is usually bad knots and the abrasion of many casts that causes line to break.  The very longest I would ever go on the same knot to the fly is one session of fishing.  Even tippet to main leader knots should be re-tied daily.

I would suggest that for early fishing a minimum of an 8-weight rod is advisable, not so much for landing fish, but for casting the larger flies. If you do hook a good fish the trick to landing them and doing it relatively quickly is get parallel or much better still, somewhat down current of the fish.  If you sit out in the middle of the river with the fish straight down current you will have to pull much harder for much longer, and the chances are very good that something will break or the fly will be pulled out.  If the fish has to swim against not only the pull of the line but also the current of the river it will tire much more rapidly.  That is good for your chances of landing the fish and for the survival of the creature once released.

If you have only a week or two a year to go salmon fishing then it is hard to recommend the first three weeks of June over later times. Some of the additional advantages, though, are that the water is guaranteed to be relatively cool and to be flowing at a decent height. 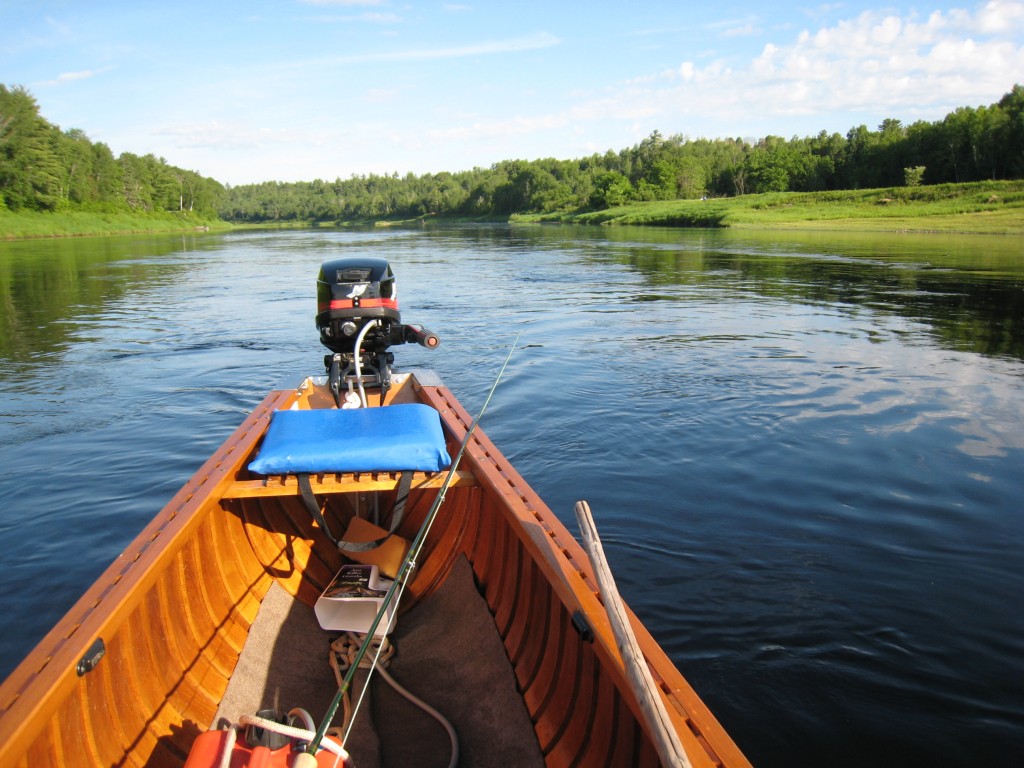 Looking over the transom of the Sharpe at a Miramichi filled with cool June water flowing through a beautiful green valley.

These are good conditions and fish are likely to be aggressive takers.  There are normally less people at the lodges so availability is good, and at some camps you can engineer a lower rate than during the height of the season. If you do catch fish they are very likely to be large salmon and the best fighters of the season. 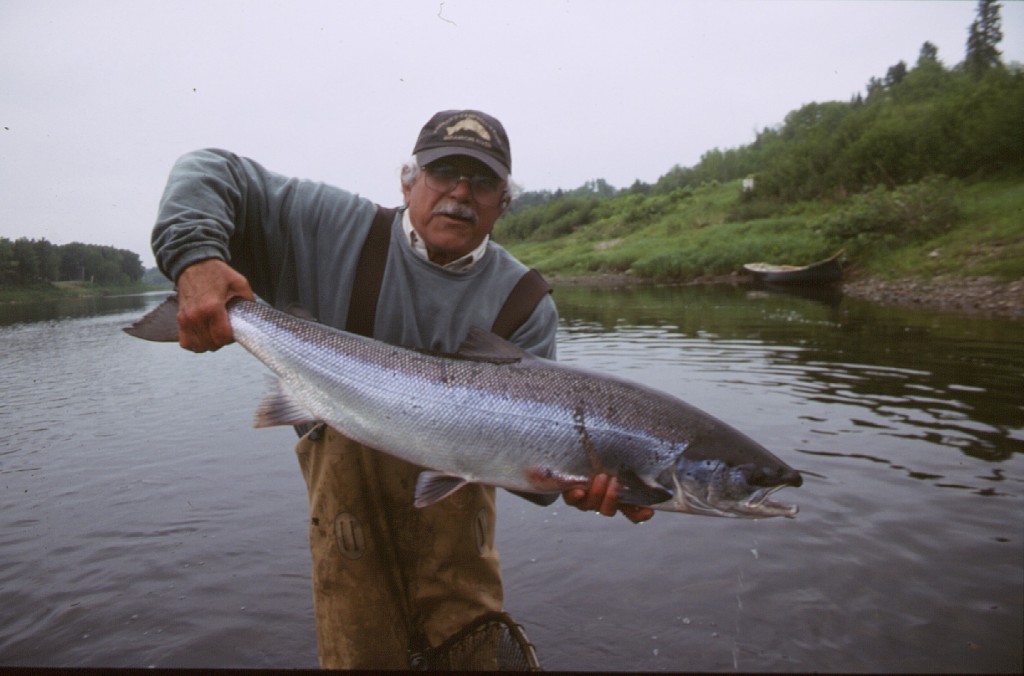 By the way, here is a little extra section on Tackle Maintenance.  If you haven’t done this work yet it is definitely time to get going:

← In Time of Winter Prepare for Spring – Salmon!
High Summer on the Miramichi →