With the current state of world affairs, and the shelter-at-home situation that we now find ourselves in, I thought I’d start a blog that I will keep open until the ice is out of the Miramichi, tracking the progress on a ongoing basis.  I may not bother you with a notice every time I post a new picture of the river, so just check back every now and then to see if there is anything new.

3/21/2020 Actually I’ve been watching for a little while, and the first hints of what is to come were visible today.  You will see below two photos – click to enlarge.  One is from the mouth of McKenzie Brook across from Jason Curtis home.  The warm weather and rain of 3/20 have left the top of the ice covered with a little water.  To date the water has only risen about 6 inches from this event, and it will be cold the next few nights.  There probably won’t be a big change until late in the week or next weekend.

The other picture is from the MSA  webcam up at Bullock’s Lodge in Boiestown.  You will see there a distinct wet line on the ice over the channel of the river. 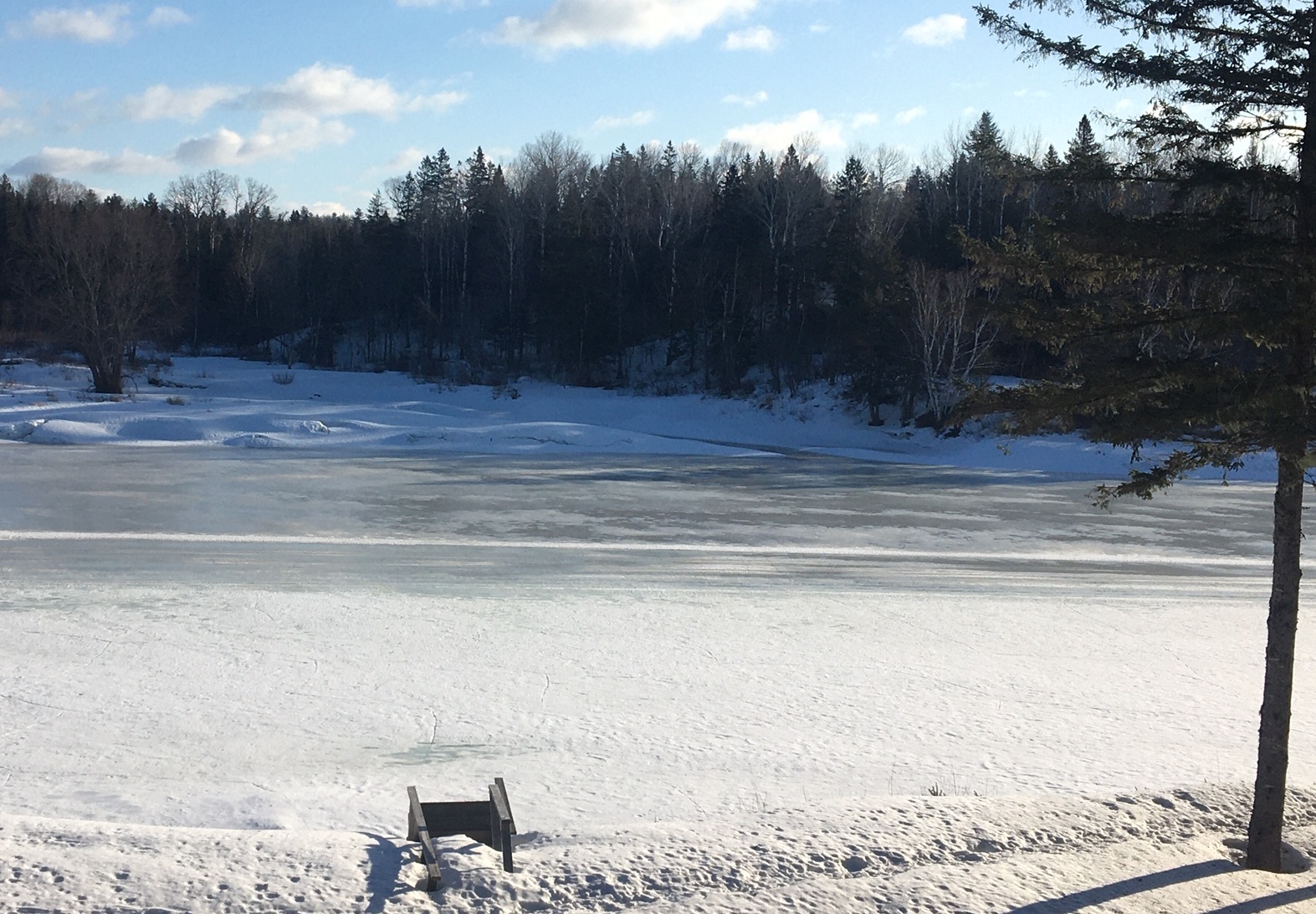 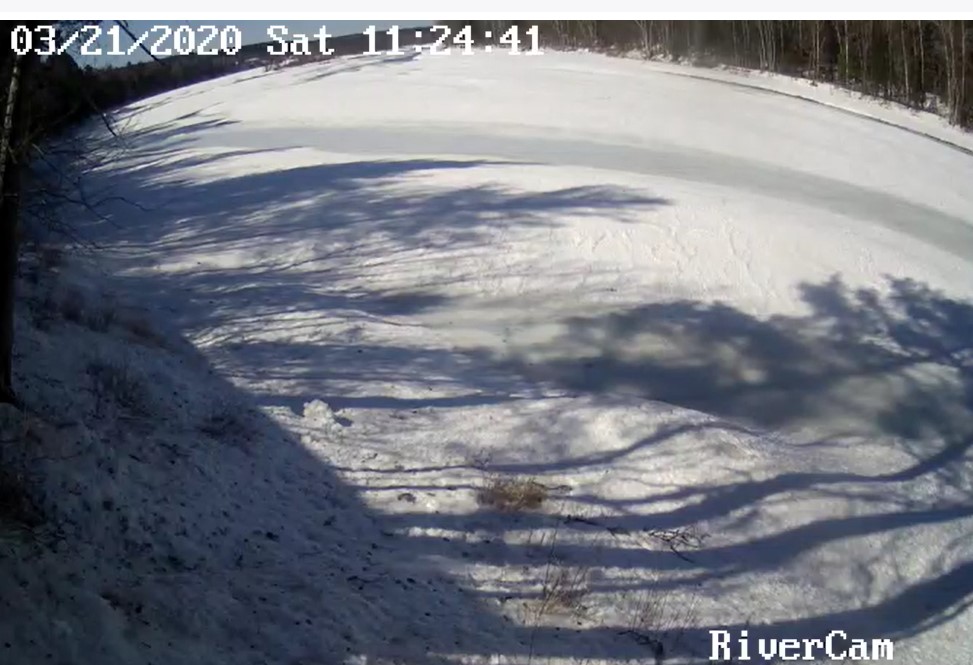 3/28/2020 Fast forward a week and here is Bullock’s this morning. It doesn’t look a lot different than the week before, though I’m sure the ice has thinned out a bit. 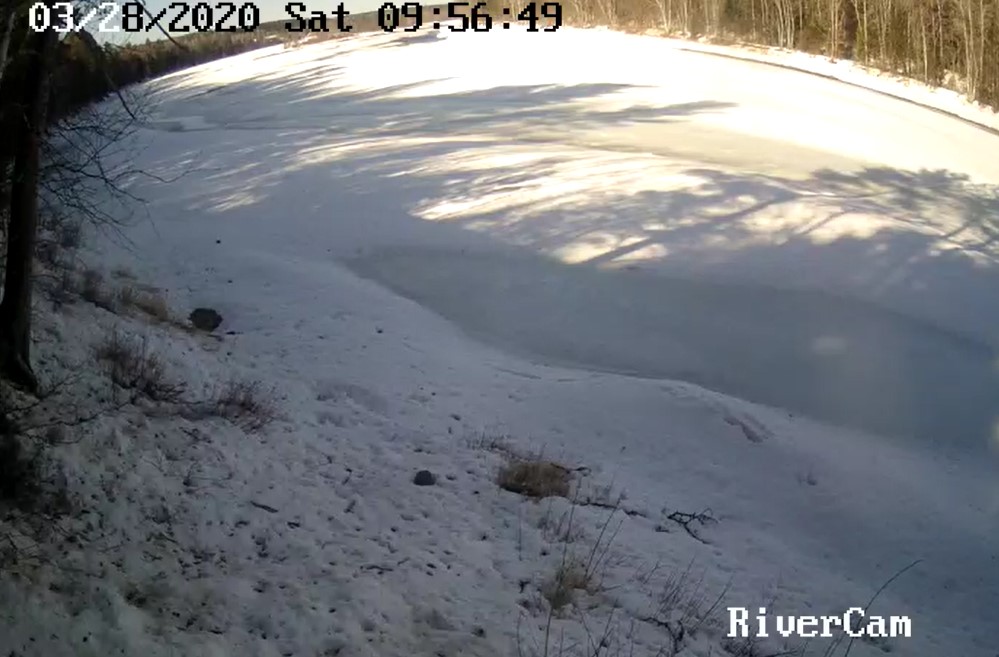 I see that the height is 1.8 meters on the Blackville gauge, again about where it was last Saturday, but during the week it had been up as high as 2.05 meters.  It is going to be warm and sunny today, but cold tonight dipping into the high teens F.  There is snow forecast for Tuesday, and the rest of the week is cloudy and cool.  It seems unlikely that we will see ice out before the second week of April. 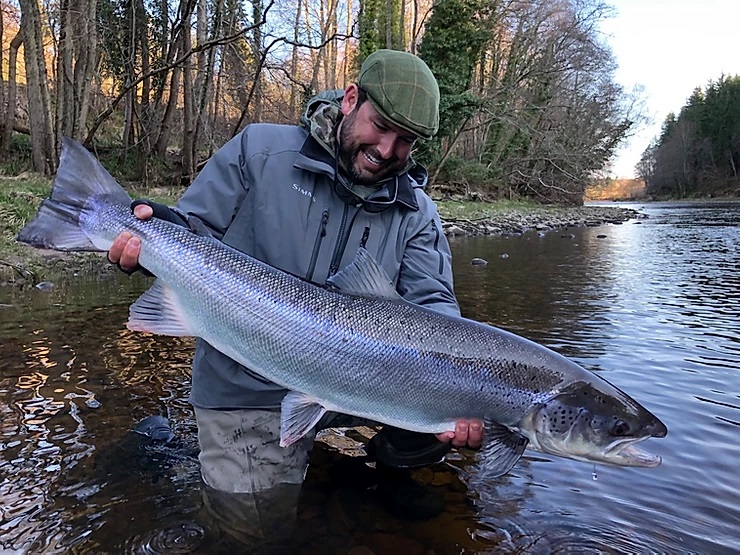 Estimated 30 pounds from the Findhorn, Ian Gordon Speycaster blog. Thought to be a repeat spawner.

While Canada is waiting for ice-out,  fishing in Scotland was in full swing, though, the self catered lodging business has now been shut down by the govt because of corona.  It was interesting to get a new blog post from famed Speycaster Ian Gordon yesterday, though, and to see him excited about repeat spawners aka rebuilt kelts. Many Scottish rivers are thought to have far fewer repeat spawners as a percentage of their run than we have on the Miramichi where virtually every salmon over about 14 pounds or so is thought to be a repeat spawner.  Ian stated, though, that he is not confident that repeat spawners have been studied enough there to really know how common they are.  I myself have caught several salmon on the River Naver that tag returns showed were rebuilt kelts, so I suspect Ian is right and there are more of these fish in their rivers than some might think.  Scotland does have many spate rivers – small fast-running rivers coming directly out of the hill country and driving right into the sea – that contain none of the deep, slow flow that kelts need to overwinter.  There also many rivers large and small with some deep, slow pools, and even lochs along their way that can and do hold lots of overwintering kelts.

We’ve written a lot in past blogs about the importance of kelts and the resultant repeat spawners to the Miramichi.  These are the larger adult salmon that we see in the river, and they produce many of the eggs laid every fall.  They are very important to the stability of the population.  If you do get spring fishing this year and are fortunate enough to land some fish, just imagine each one building a redd or fertilizing eggs on the Miramichi or Cains in the fall of 2021, and take extra care releasing it.

These may be minor conservation measures in the total scheme of things, but everything we can do helps.

Another consequence of the corona virus is that Stackpole books closed for two weeks until April 6.  Hopefully when they reopen next week the reprint of On the Cains will be there and I will be able to get books out shortly to those who ordered them.  I apologize very much for the delay, but as we know the virus has really thrown a big wrench into things. 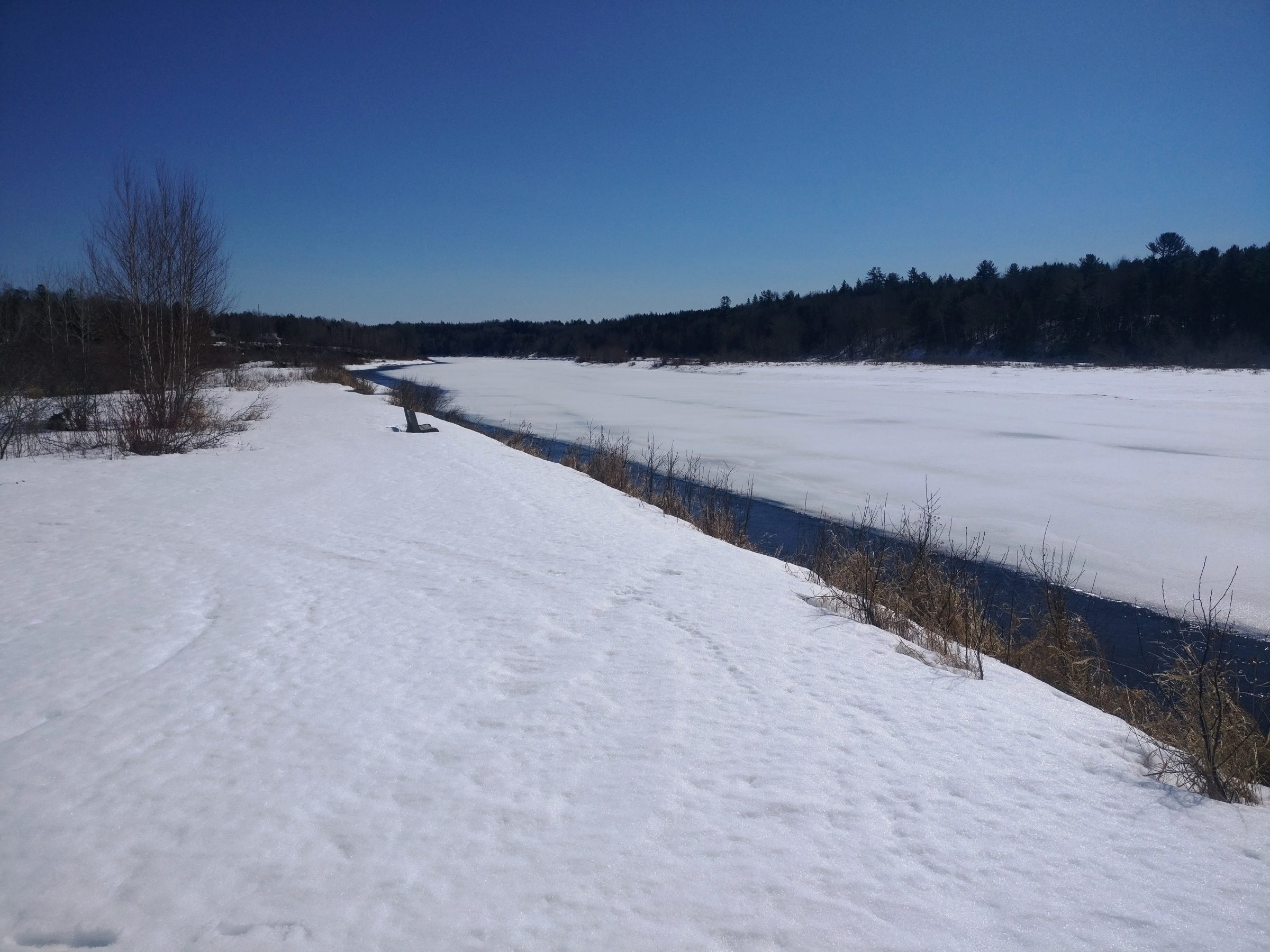 Here is a picture from On the Cains of Salar Haven in the late 1950s.  The young man in the photo, Bud Hofer,  sent me this picture of himself on his first trip to the river in 1958. 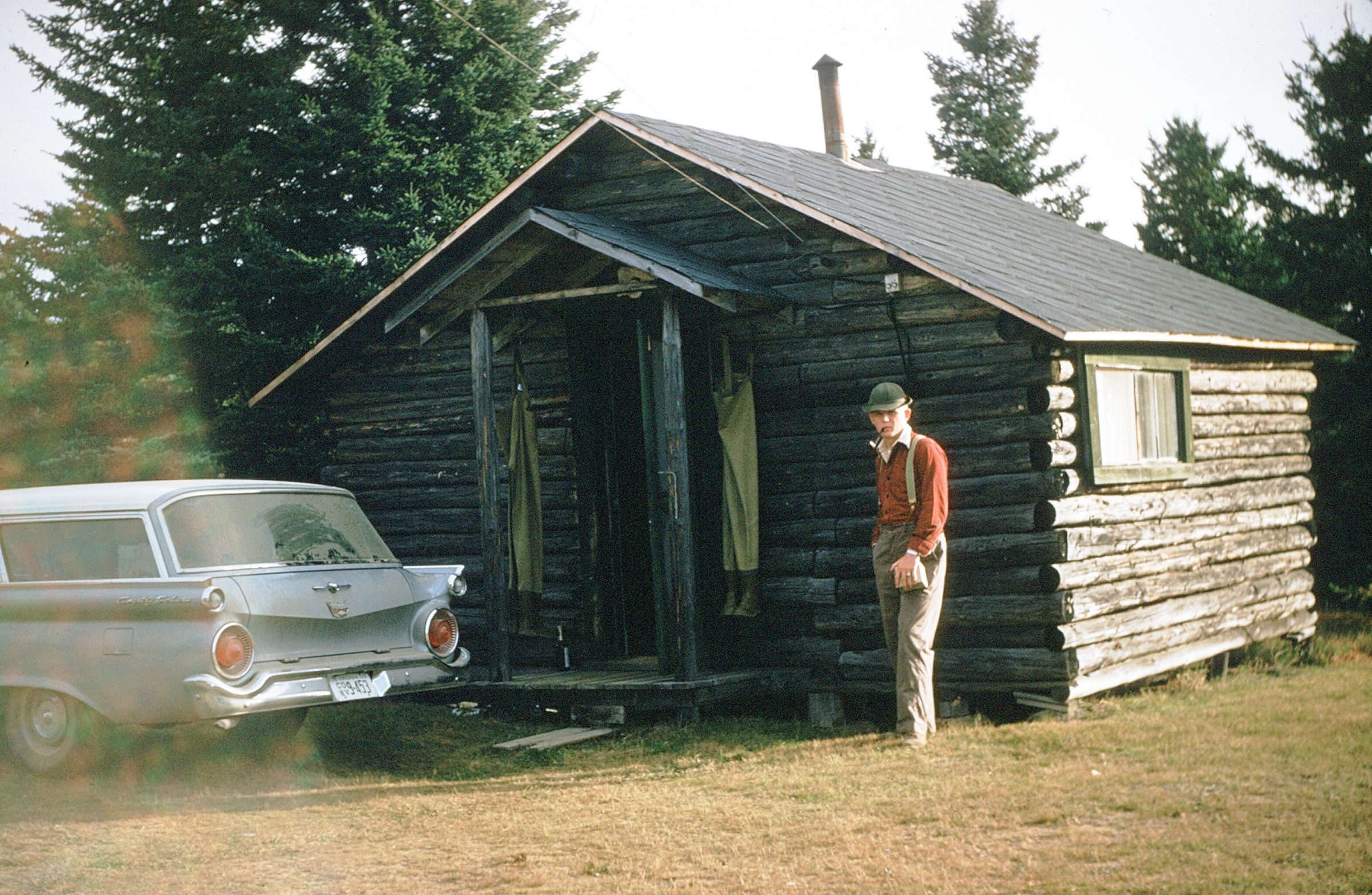 4/2/2020 update – things are progressing along in the two pictures you will see below.  You will see a big change in the situation in Boiestown, but a lesser one in Blackville.  The river is slowly rising right now.  The current forecast is cooler and with less rain than a few days ago.  I thought we might see some movement by the end of the coming weekend, but that is looking less likely. 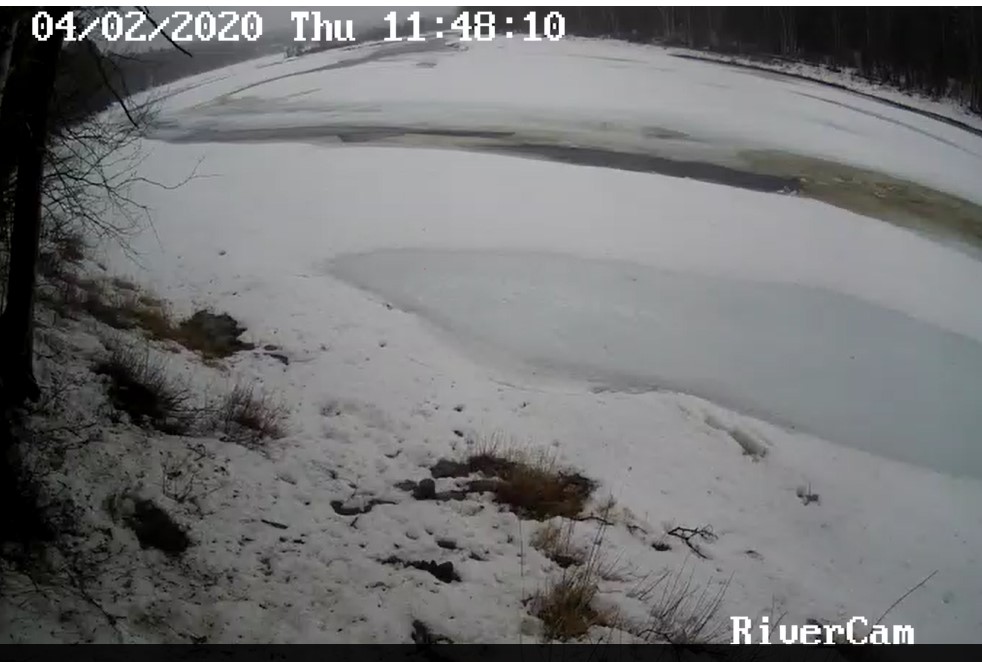 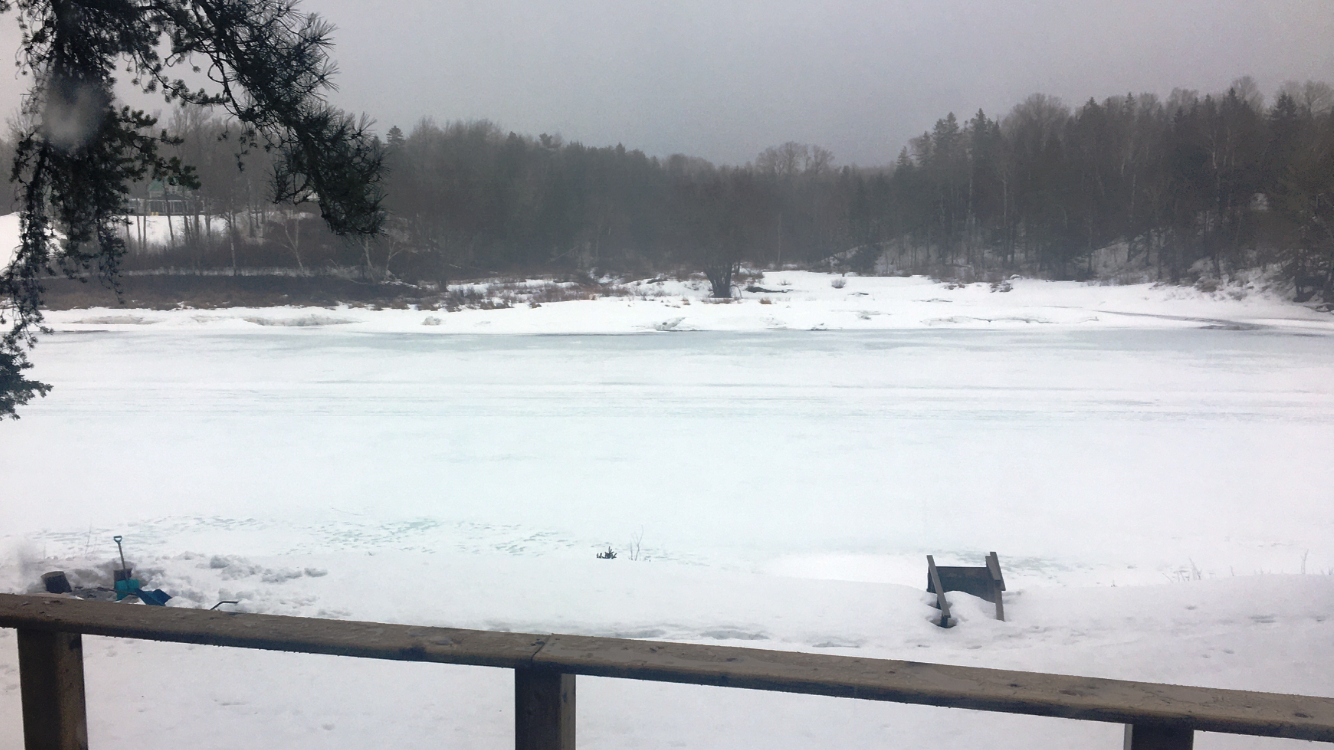 4/4/2020  Things are happening fast now on the Miramichi.  In spite of freezing temps this morning the river is up to 2.6 meters from the recent rain.  That is a raise of 30 inches since Thursday.  Jason Curtis sent me pictures yesterday of Campbell’s and there was still lots of snow and ice there, but in today’s photo of Bullock’s in Boiestown you can see that the center of the river is substantially open with leads on both shores.  Sunday night and Monday are forecast periods of rain and 10C/50F.  That may very well bring the river way up and take the ice. 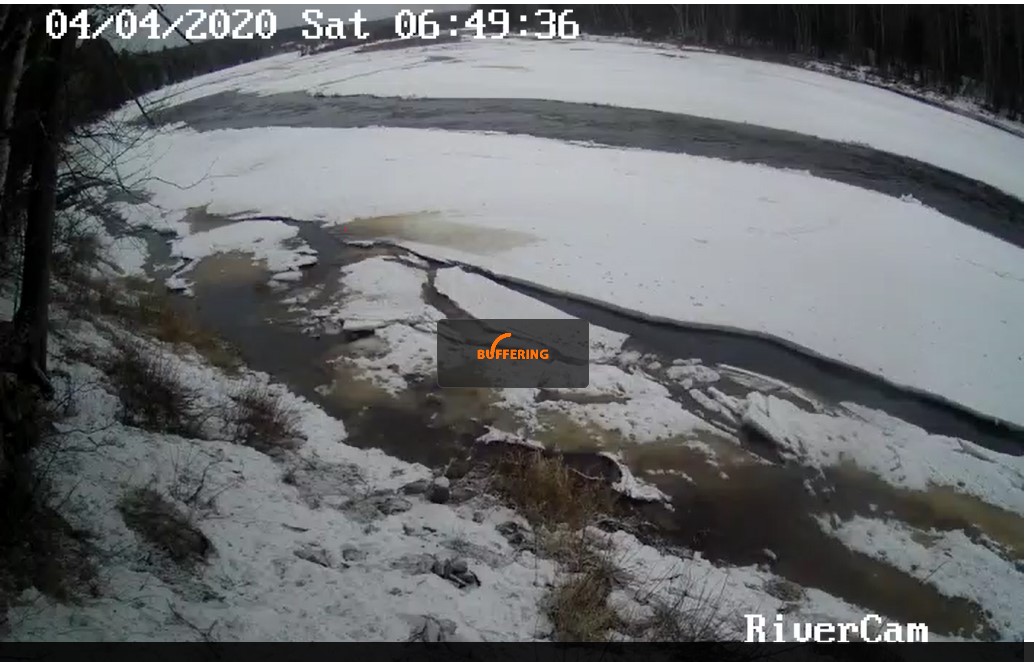 Things don’t seem to want to wait that long.  The next picture is also from today, 4/4/20, but is about 7 hours later.  The river in Blackville is now at 2.8 meters and rising.  You can see in the upper part of the picture below that the ice has gone in the upper part of Bullock’s pool in Boiestown. 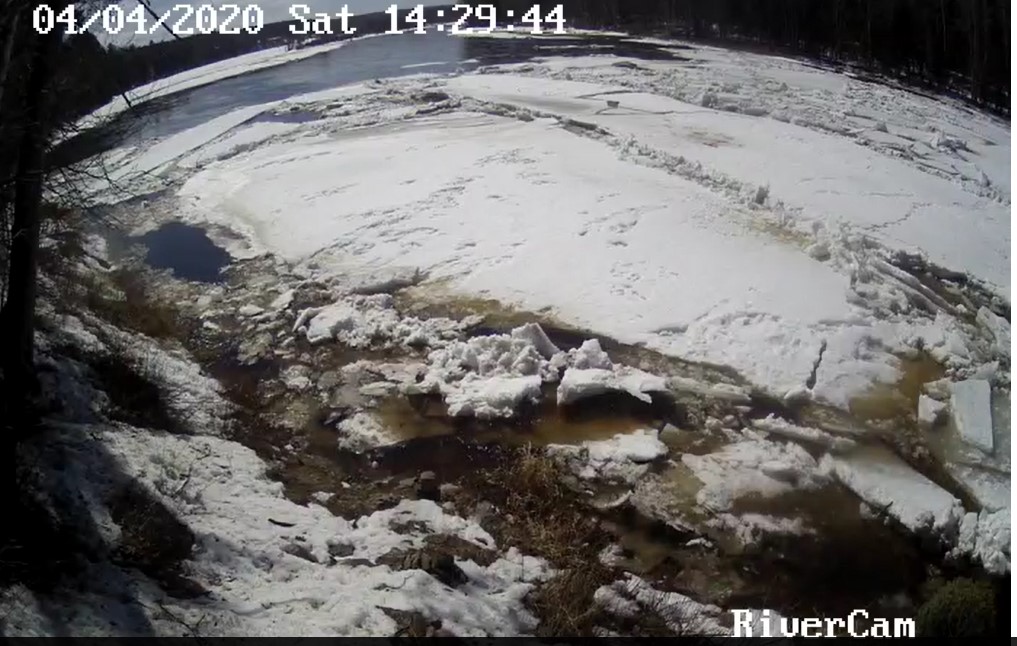 4/5/2020 8:26 AM  The river is now up to 3.2 meters in Blackville.  It has been a long steady rise – which is healthy indicating no ice dams as of yet – and is now up to spring height.  At Bullocks the river looks very much like last night, so there is no real ice run yet.  The next few days area seasonably cool and the forecast rain has become showers or snow flurries.  Hard to say when the ice will run. 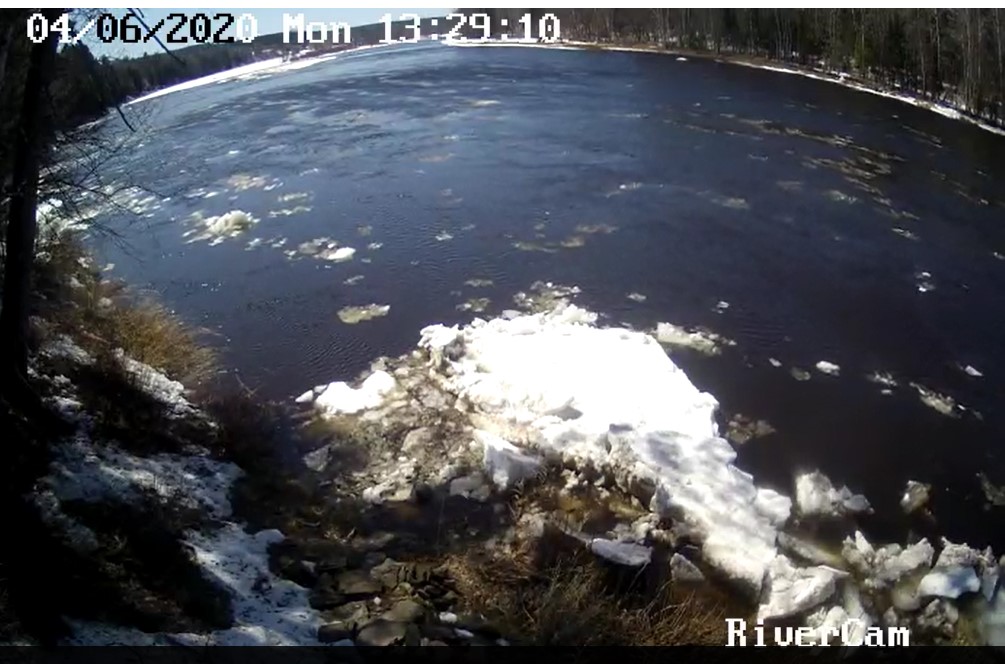 4/7/2020 While the ice broke up on 4/6 in Boiestown, it didn’t really start to move until 4/7 in Blackville.  At the end of the day it was moving but jamming up on itself here and there.  The ice isn’t terribly thick, though, and hopefully there will be no major problems with the river clearing up.

Here is a link “IMG_4334 below” to a little movie taken by Jason Curtis from his house looking over to my Campbell’s Pool camp at dusk on 4/7.

4/8/2020 At 5:00 PM Peter Downey e-mailed me that the river was running clean except for some small pieces in front of his home next to mine at Campbell’s Pool in Blackville.  Four miles down river at Doctor’s Island the report is, though, that the river was still full of ice.  With rain and snow forecast during the next couple of days the river should be clear as a bell from top to bottom for opening day on 4/15.

12 Comments on “Miramichi Ice Out Report”