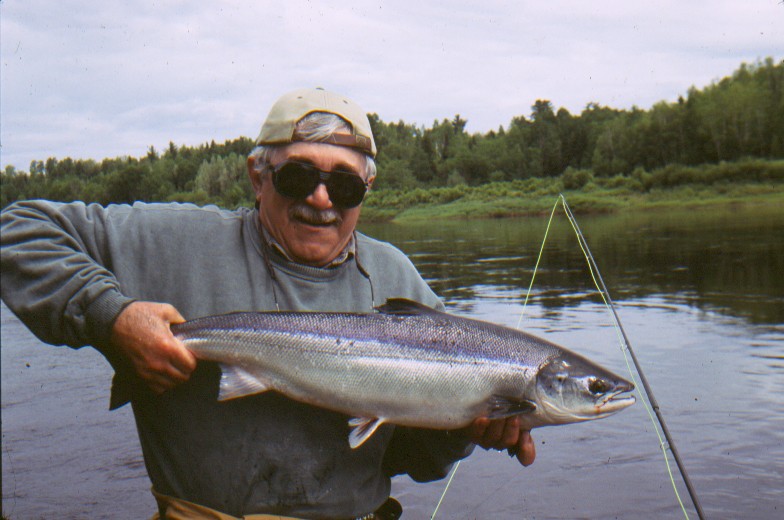 The late Willy Bacso holds a classic early season “springer” fresh into the SW Miramichi from the North Atlantic. 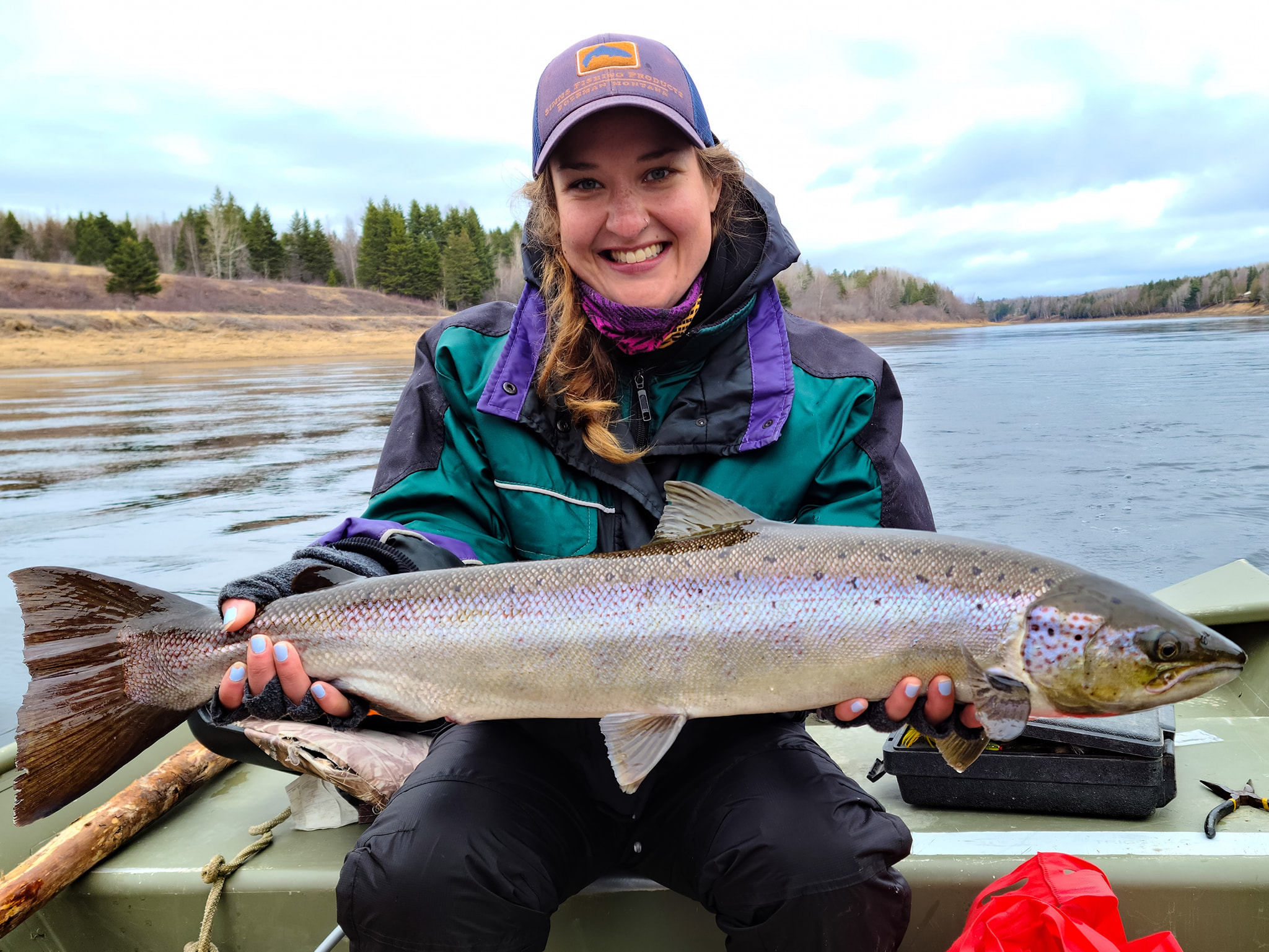 This is a beautiful spring salmon, but clearly it has lost a lot of weight since entering the river the previous year and spawning.  Country Haven photo.

After the long winter the Miramichi River finally ices out, and last fall’s spawning salmon who have spent the winter safely resting under the ice, find themselves again swimming in open water.  As of opening day, on April 15 these fish haven’t eaten in months, and they have lost a sizeable percent of their body weight.  These spring salmon aka kelts are anxious to get back to sea, and before they make that move they start feeding in the river.  The lower Miramichi still hosts a very large smelt run, though it too has apparently been severely predated upon by the out-of-balance striped bass population.  The smelts are the main staple of the kelts as they drop down the river and into the estuary.  The kelts quickly being to regain their size and strength, and some taken near tidewater in mid-May are virtually indistinguishable from bright fish. 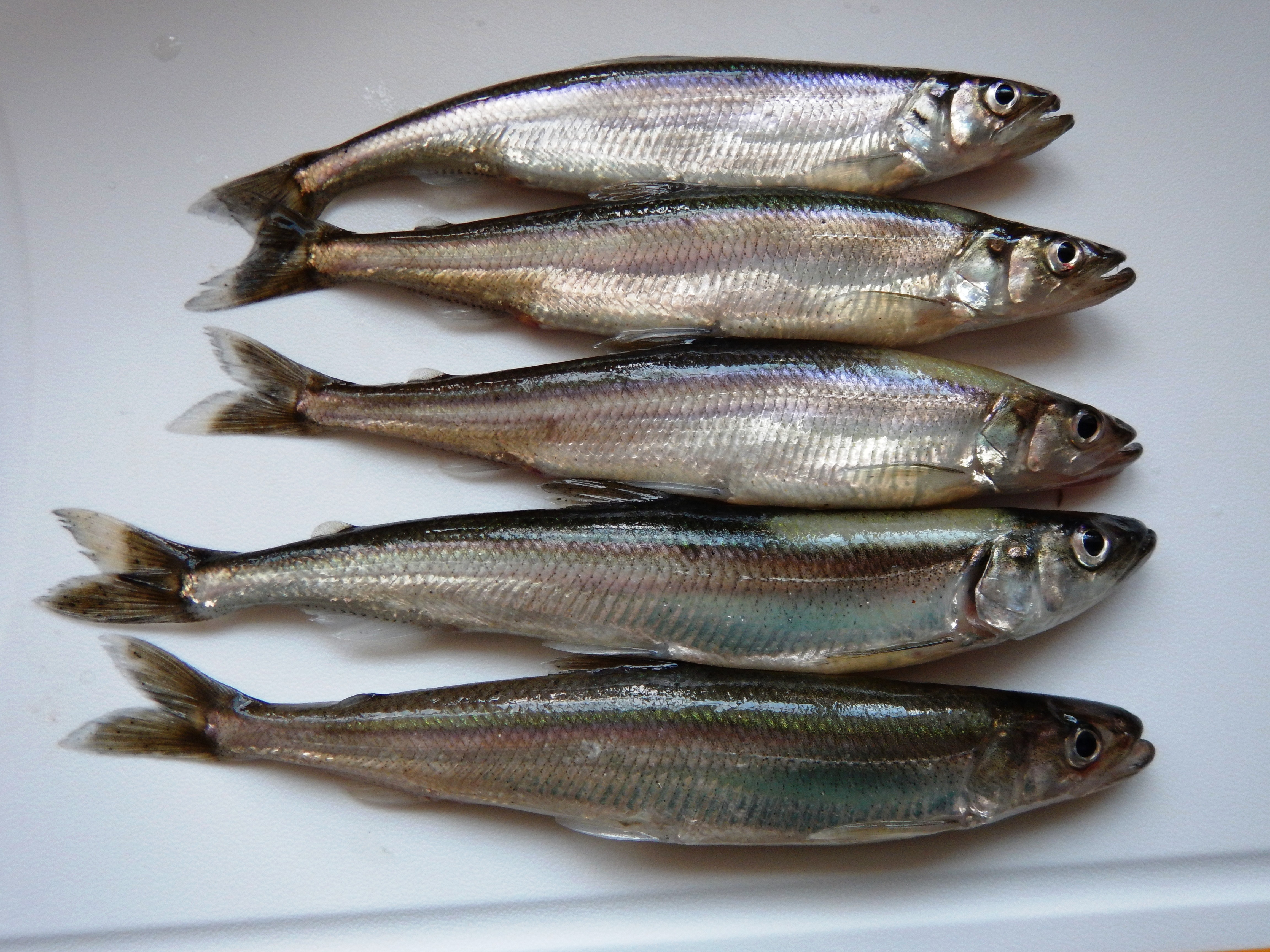 Rainbow smelts provide an excellent, high-calorie forage to help the kelts quickly rebuild before heading out into the ocean.

While spring salmon are not the equal of the thickly muscled, early-run, bright fish that the Scots call “springers” they are still good fighters.  They also provide a good reason to get on the water in the early season.  If you’ve never tried it, or have heard others pooh-pooh the fishery, you must give it a try for yourself.  The Miramichi hosts anglers every year who come faithfully to Canada from Europe and America just to take part in the spring salmon fishery.

Spring salmon fishing on the Miramichi can be done from the shore, but better fishing is generally had by the traditional manner of one angler fishing from a boat with a guide.  By law the tackle is still fly fishing only, but sinking lines and large flies are the norm.  The Miramichi is a big river in April and May, and in most areas wading is out of the questions.  A boat allows the guide to move his angler to a variety of locations, and find the salmon which are often holding grouped together in certain spots where the depth and current are to their liking.

Roll back the clock from April 15 to March 1 in the North of Scotland, 11 degrees of latitude further north than the Miramichi – roughly the same latitude as Hebron Fiord on the north coast of the Labrador – the kelts are already dropping back to the sea.  The springer season is underway, with chrome bright salmon arriving on the tides.  On March 1, though, the Miramichi is still covered in several feet of ice, and open water fishing is 6 weeks away.  The reason for these counterintuitively differing climactic conditions, is simply due to the Miramichi getting much of its weather from the cold land mass of Arctic Canada, while the Scottish Highlands protrude out into a comparatively moderate and moist flow of air called the North Atlantic Drift.  Later on, the Miramichi more than makes up for the cold, late start, as our summers are much warmer than those in Scotland. 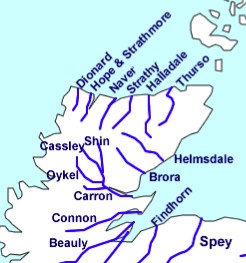 Salmon Rivers of the northern Highlands of Scotland

I have found over the years that our Miramichi salmon seasons seem to follow those of Scotland.  If they have a good early run, the season as a whole seems to be a good one – and so is ours.  If we have a few fish in late May, and a solid June run the numbers for the year are generally up.  Someone once told me that it was like a bell-shaped curve.  If the outer edges of the bell are large it is just an indicator that the main part in the middle is probably going to be bigger too. 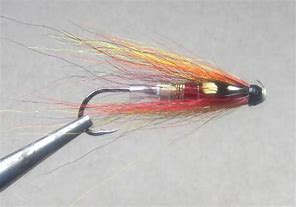 With this in mind, yesterday 3/1/22, I spoke with Pat Nicol, a retired man from Wick, Scotland who has been for many years a local salmon highliner on the Thurso River.  He guided me on my first trip to Scotland in 2007, and we have stayed in frequent touch ever since.  Pat is in close internet contact with an extensive web of ghillies and fishermen from salmon rivers all over the north of Scotland.  Pat said: “The Brora – river of Megan Boyd – is fishing great this year.  They have had a number of fish already, while the Helmsdale caught its first two just yesterday.  That’s very unusual.  Suddenly springers are being caught in all the rivers.  There have been 4 off the Thurso in recent days, and the first one yesterday morning from the Borgie.  The Naver is now producing regularly.  So the 2022 salmon season begins…  I’m off to the Naver tomorrow, so look for a full report after I return during the week of March 14th.  Hopefully Scottish catches will remain good, and be the harbinger of a positive year for the Miramichi.

Miramichi Fish Pal is officially off the ground!

Fish Pal is a widely used international platform for salmon river websites.  It provides anglers with tons of great information on the subject river and the fisheries/lodges/outfitters that service that river.  The Miramichi Salmon Association has purchased the website access, and is providing it to outfitters along the river to help display the world class fishery that exists right here in the Province of New Brunswick.

This blog will talk about Miramichi Fish Pal a lot as the season goes on, as will the Miramichi Salmon Association itself from its own website.  There is a lot to do yet in order to optimally fill out the pages and begin providing up to date fishery and catch reports.  When it is firing on all cylinders, though, you will be able to view availability, and book days of fishing right online if you want to.  For now, if you go to Miramichi Fish Pal and select Salmon Fishing from the menu on the left, then find Fisheries, you find a webpage for several of the outfitters along the river.  There is contact information for you to call the lodge and arrange some fishing.  We plan to add others soon.  For me it is very fulfilling to see the Miramichi listed on Fish Pal along with other famous rivers like the Tweed, Dee, Deveron, Findhorn, Spey, and the Tay.    If you go to the top of the page and select Rivers from the menu bar you will see that most of the best-known Icelandic rivers are also listed along with rivers throughout the rest of the UK as well as Norway and Chile.

Check on this Miramichi Fish Pal link and put it in your favorites.  Check on it frequently throughout the season for all the information that you need on the Miramichi.  If you have any suggestions for additional content or anything to improve the site, please fire off an e-mail to me at bigbass@maine.rr.com and I’ll pass your ideas along.

PS sign up n/c at this link to receive notifications of new blog posts – no spam and no sharing of your information. 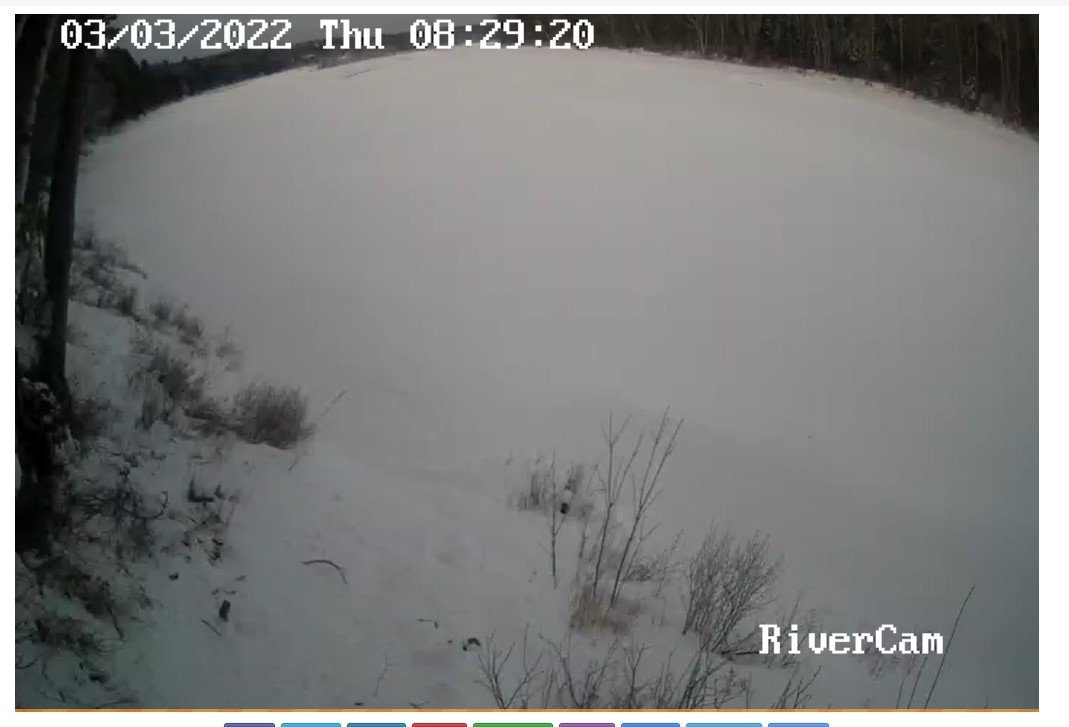 There are no chinks yet in winter’s armor at Bullock’s Lodge in Boiestown, NB. The coming month will bring big changes.