Every fall I’m struck with the beauty of the wild flowers that grow all along the banks of the Miramichi and Cains Rivers. There are definitely some nice ones during the summer too, and in both cases they are a bit of a surprise when you look at the April banking, scraped clean of all soil by the ice during runoff. The autumn flowers, though, have a special appeal, perhaps born by the knowledge that in a few weeks, or even days, hard frosts will bring an end to the delicate beauty that is all around. 2019 was one of those years when the wild flowers stood out more than usual. It’s just one more thing to love about fall fishing on the Miramichi.

There were two stretches of shoreline where I saw the greatest abundance of these flowers: one was on the Miramichi right in front of my camp on Campbell’s Pool, and the other was a very out of the way spot on the Cains. Both of these areas have something in common. That is that both locations are the outside of a bend in the river, with moderately coarse gravel and rock that is well scraped by spring ice. Perhaps the coarse gravel there is more porous, and the winter scraping gives these flowers a place to start that isn’t already choked out with grass and weeds.

I can’t possibly rank these flowers in terms of prettiest, but certainly these little blue bells are second to none. Going by the unattractive name of Gieseck’s harebell the flowers grow on relatively short, thin stems – generally a little over a foot long – and I found them flowering on both the Miramichi and the Cains long after we had received some decent frosts. I prefer one of its common nicknames, the Scottish bluebell. 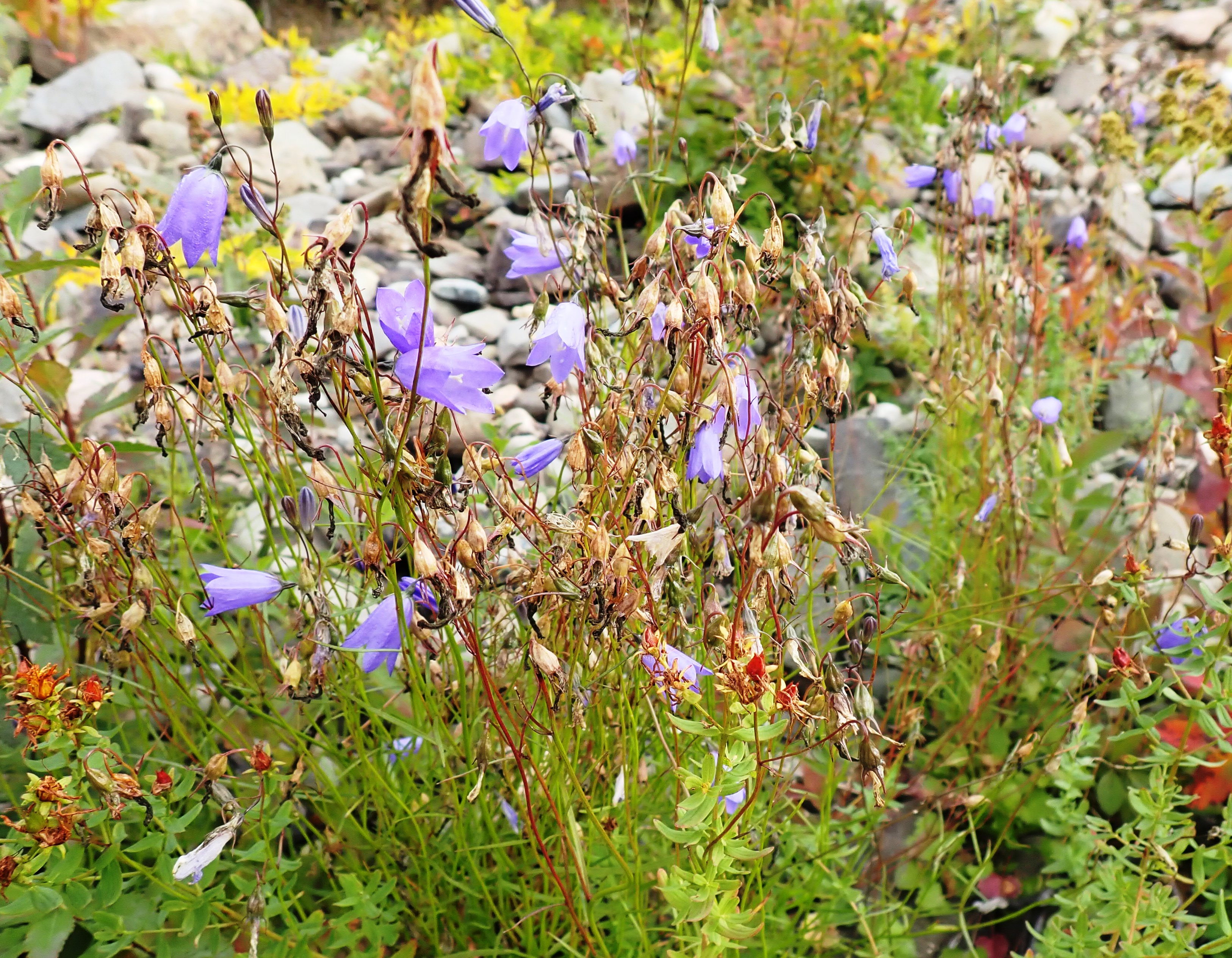 Another plant that I found on the shoreline of Doctor’s Island near some large clumps of harebell is bladder campion. According to Todd Boland’s Wild Flowers of New Brunswick field guide, this is a European introduction found most frequently near cities and towns. Blackville is a town, certainly compared to Shinnickburn, but I doubt there is any urban influence at play here. This shoreline is beaten and scoured every year by ice and water coming from a hundred miles upriver. Any flower growing here could simply have come from anywhere. The calyx, or bladder like housing from which the flower emerges – doubtless the namesake of this plant – is quite large and prominent, and this group made a significant sprawl along the island’s shoreline. 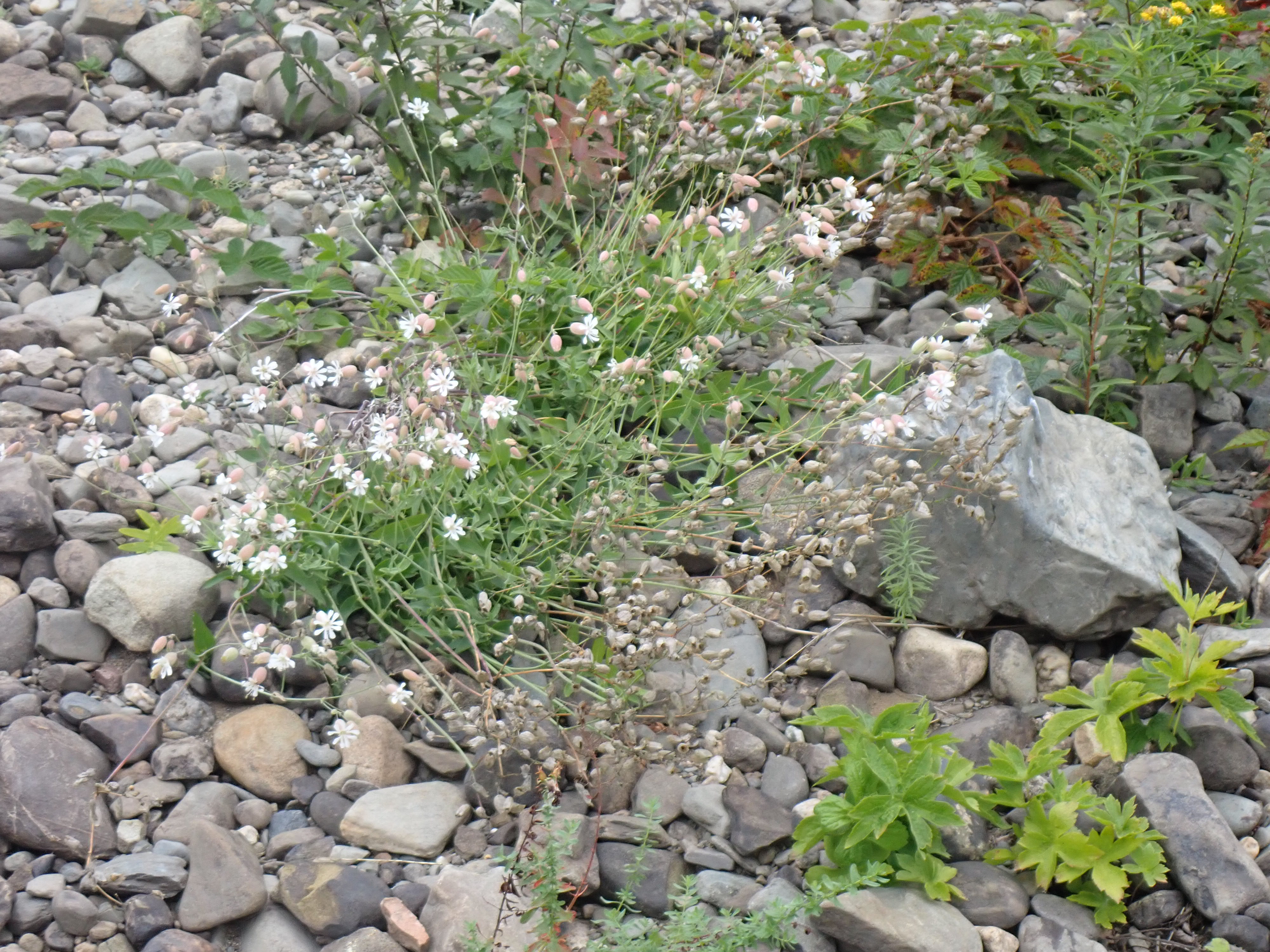 Among the very loveliest to my eye were these purple stemmed asters. This native species flowers through September.  Though I caught them towards the end of their season, this was a fairly mild fall, and they were still doing very well. 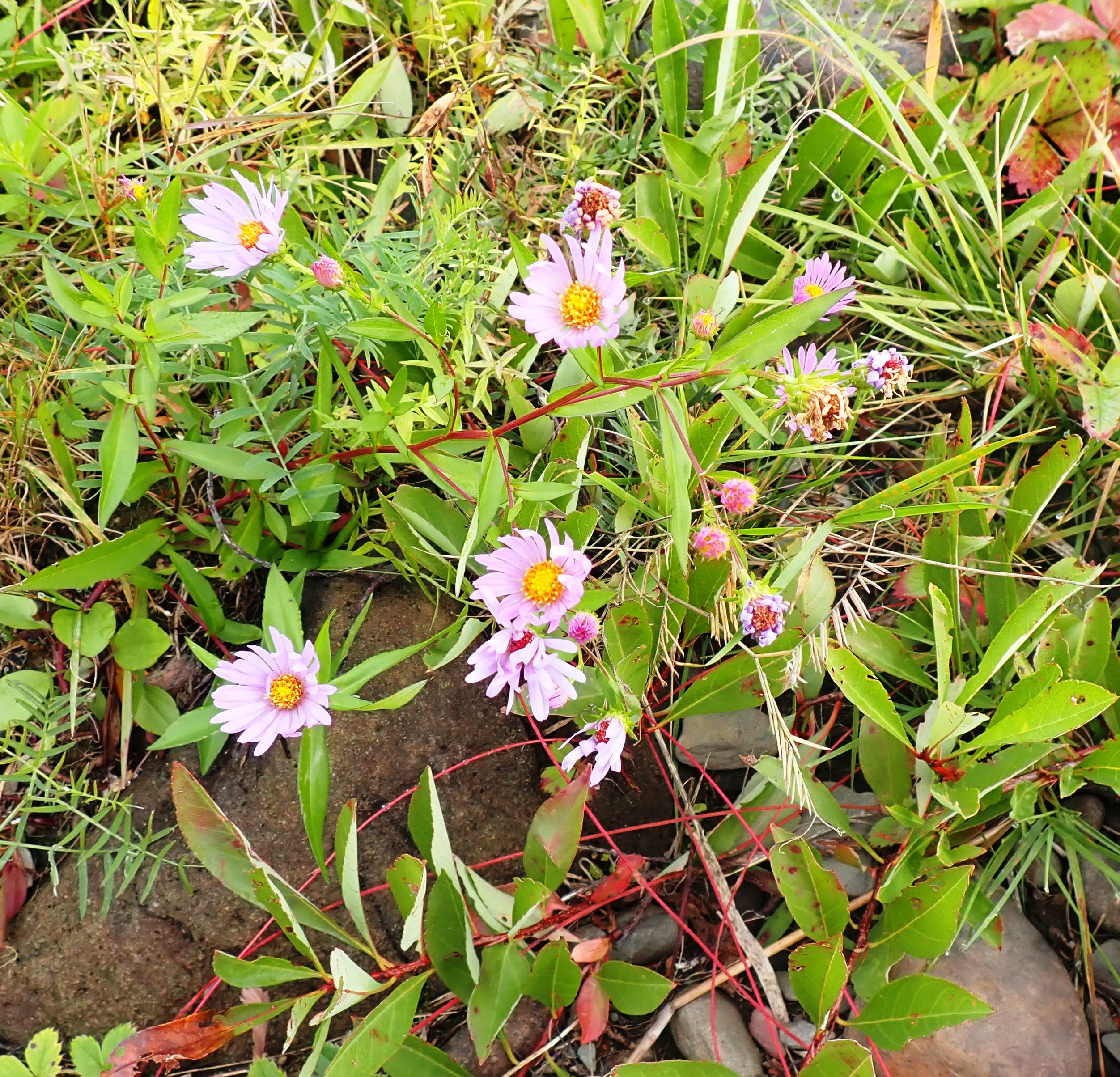 Another commonly found aster is the calico aster. This wildflowers also goes by several local names, and one I found particularly romantic for this flower was “farewell to summer.” According to Todd Boland’s field guide this is one of the latest blooming flowers hanging on in many locations well into October. 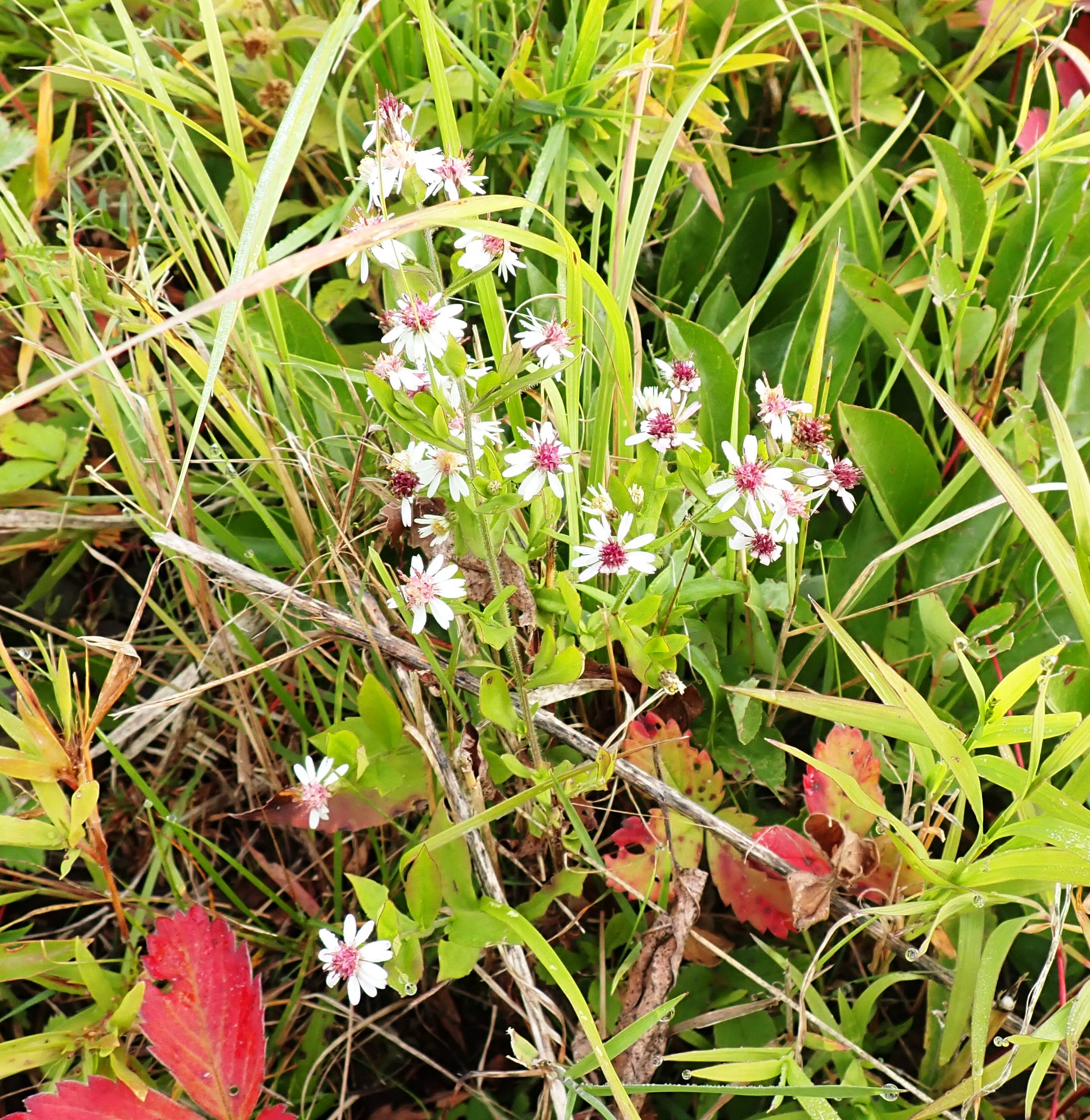 Common yarrow, another aster family plant, is found throughout New Brunswick in both native and introduced European forms. All these white flowers can drive you crazy to identify, but this one is a bit easier because of the unusual, fern-like leaves. 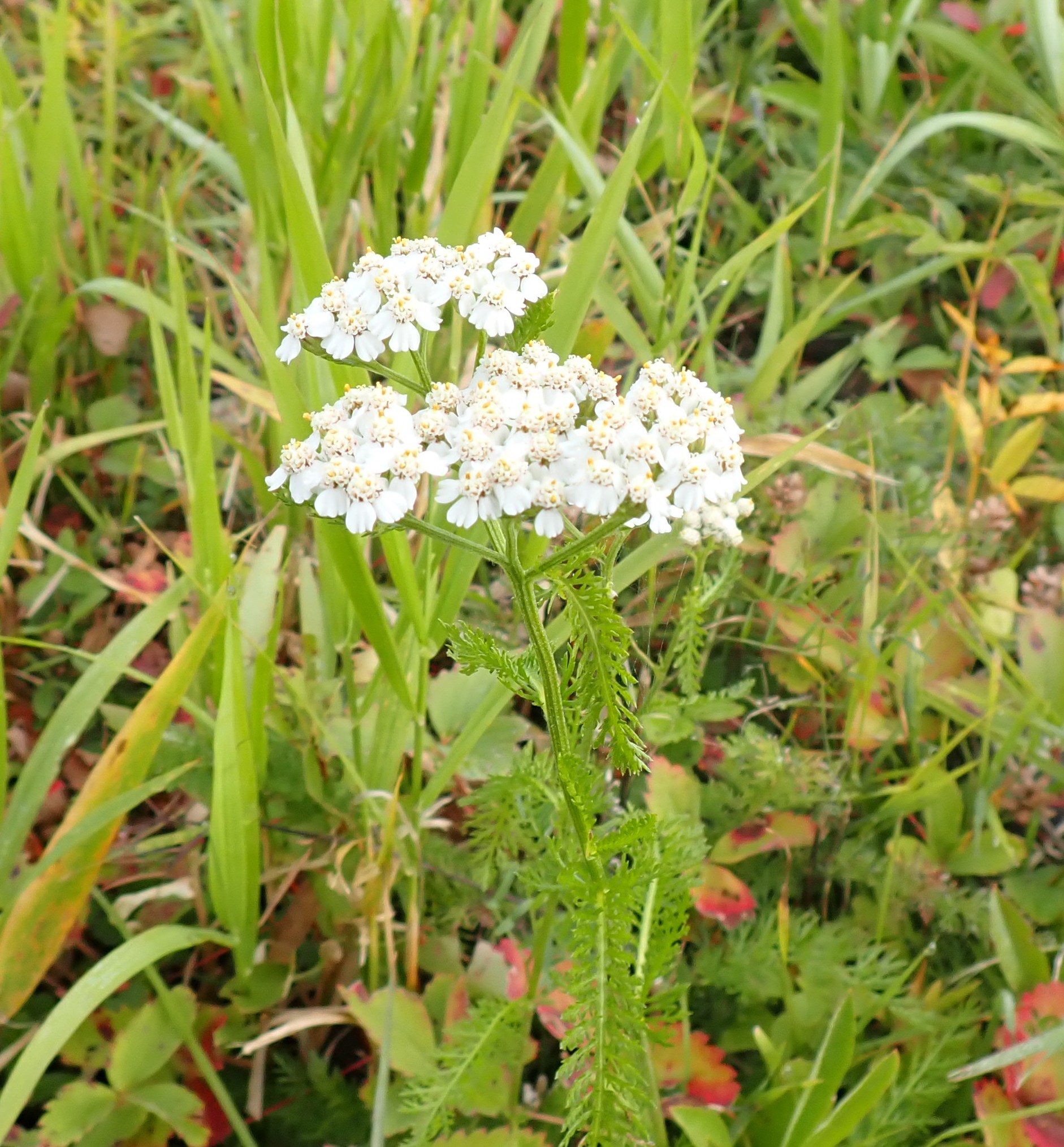 Canada Saint John’s-wort is found in damp areas throughout the Province. Flowering is supposed to be largely over by the end of August, and clearly this plant was long past its peak, but still attractive with a few flowers continuing to bloom, and even the faded blooms taking on a lovely red autumn color. 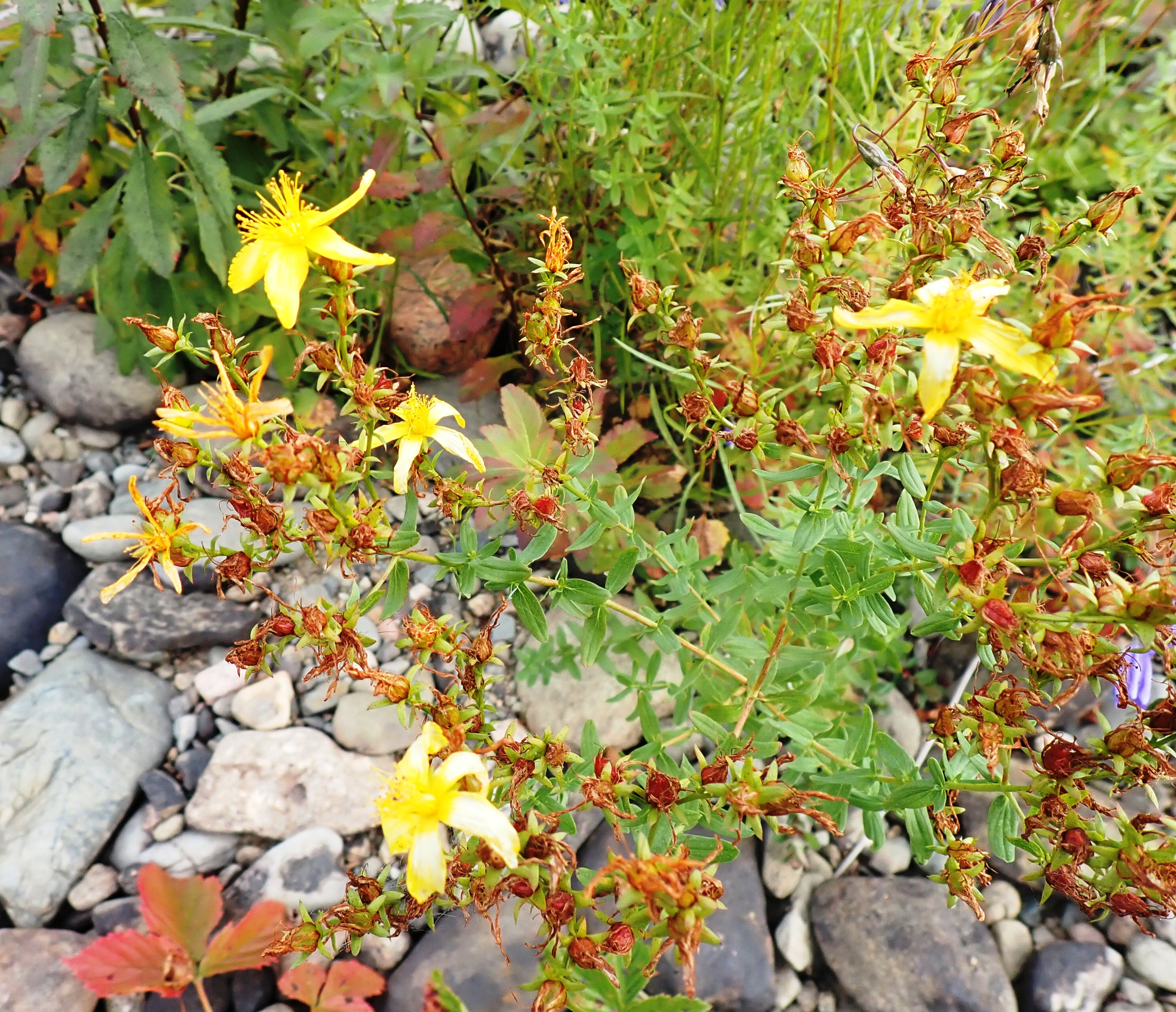 How about the name of this introduced European plant – butter and eggs! I only recall seeing one little cluster of these flowers, but they were very lovely. 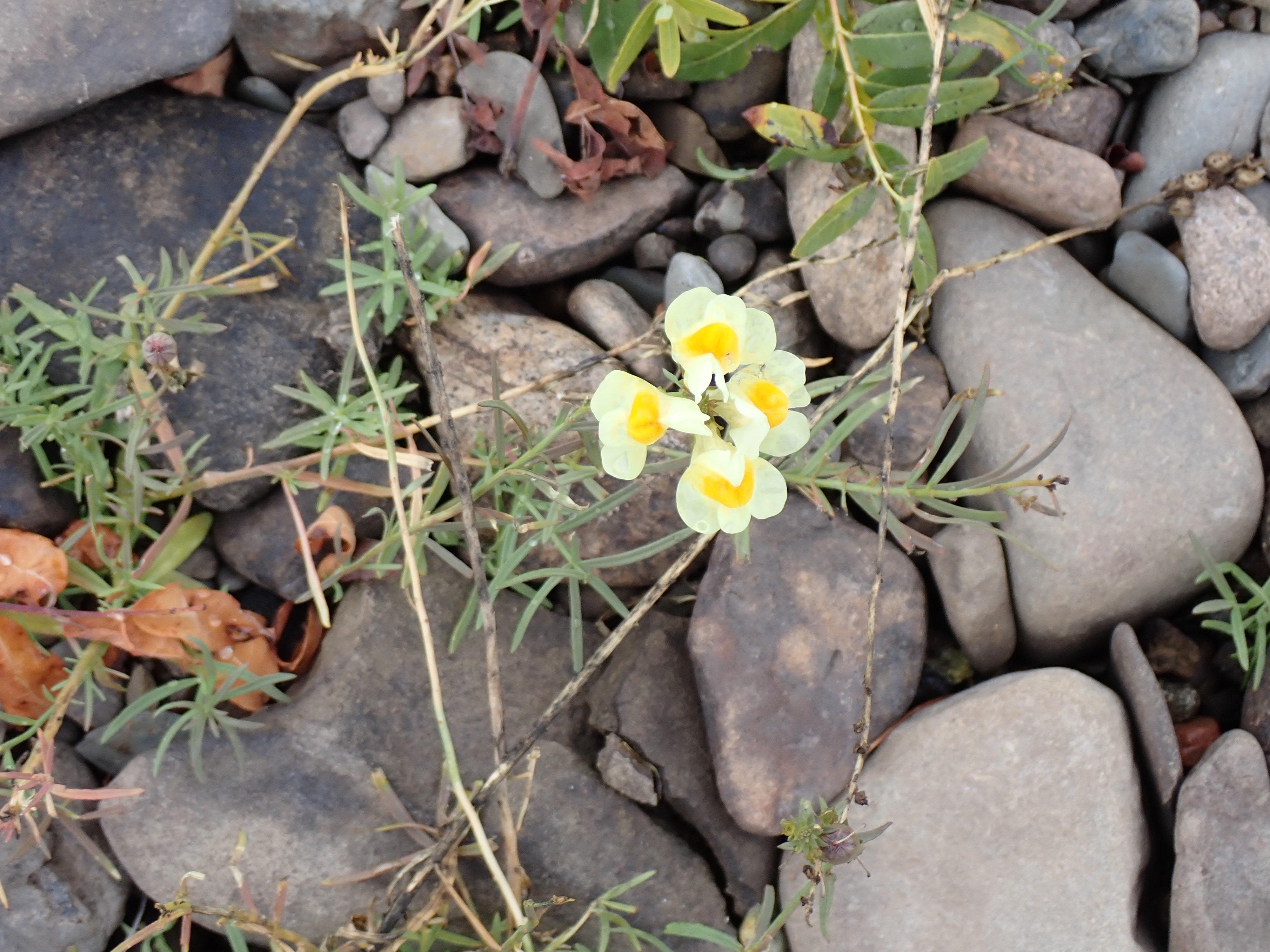