Opening Day on the Miramichi 2021 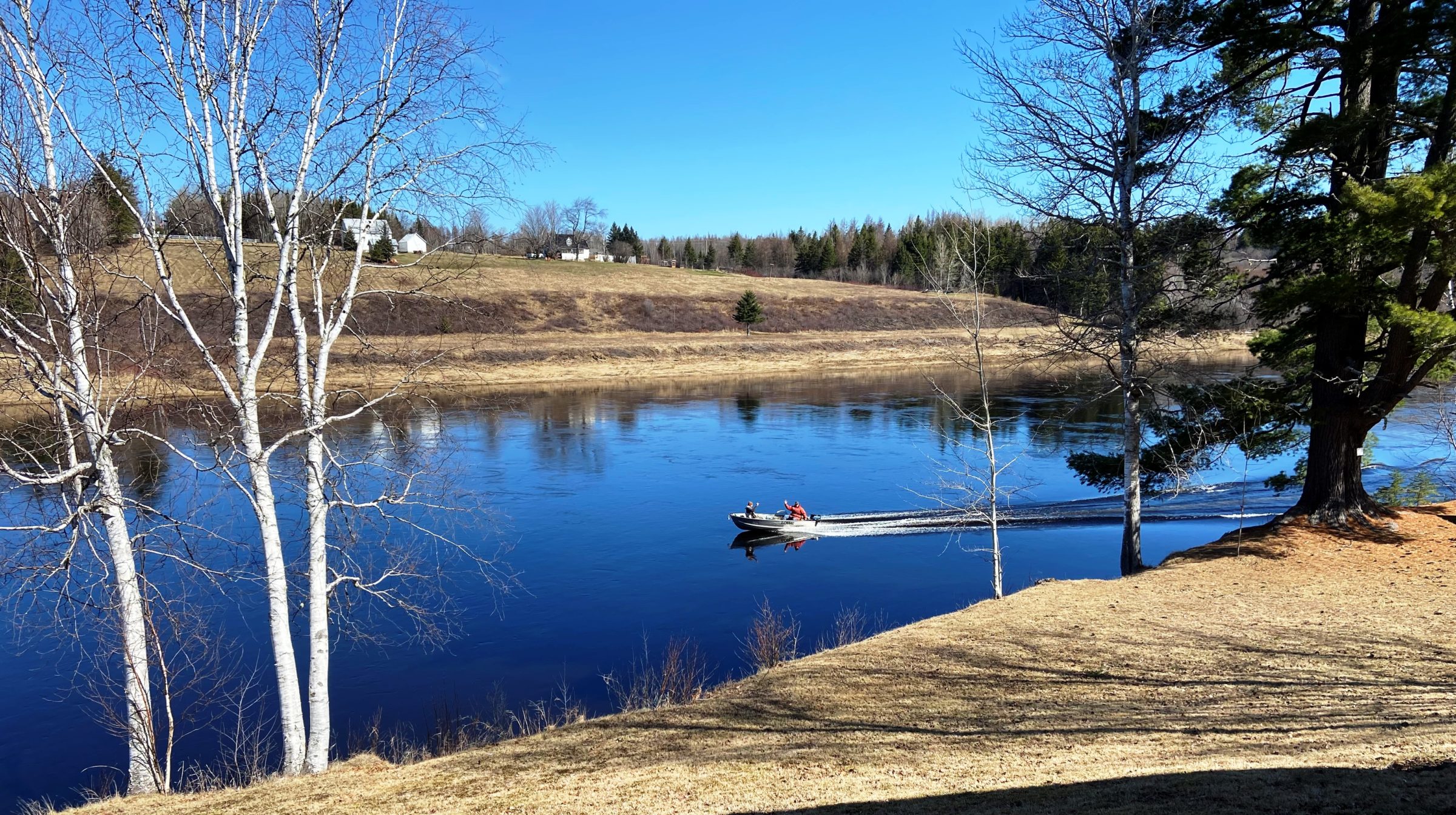 Some of the first anglers of the season leaving the lodge at Country Haven on a gorgeous April 15th morning. 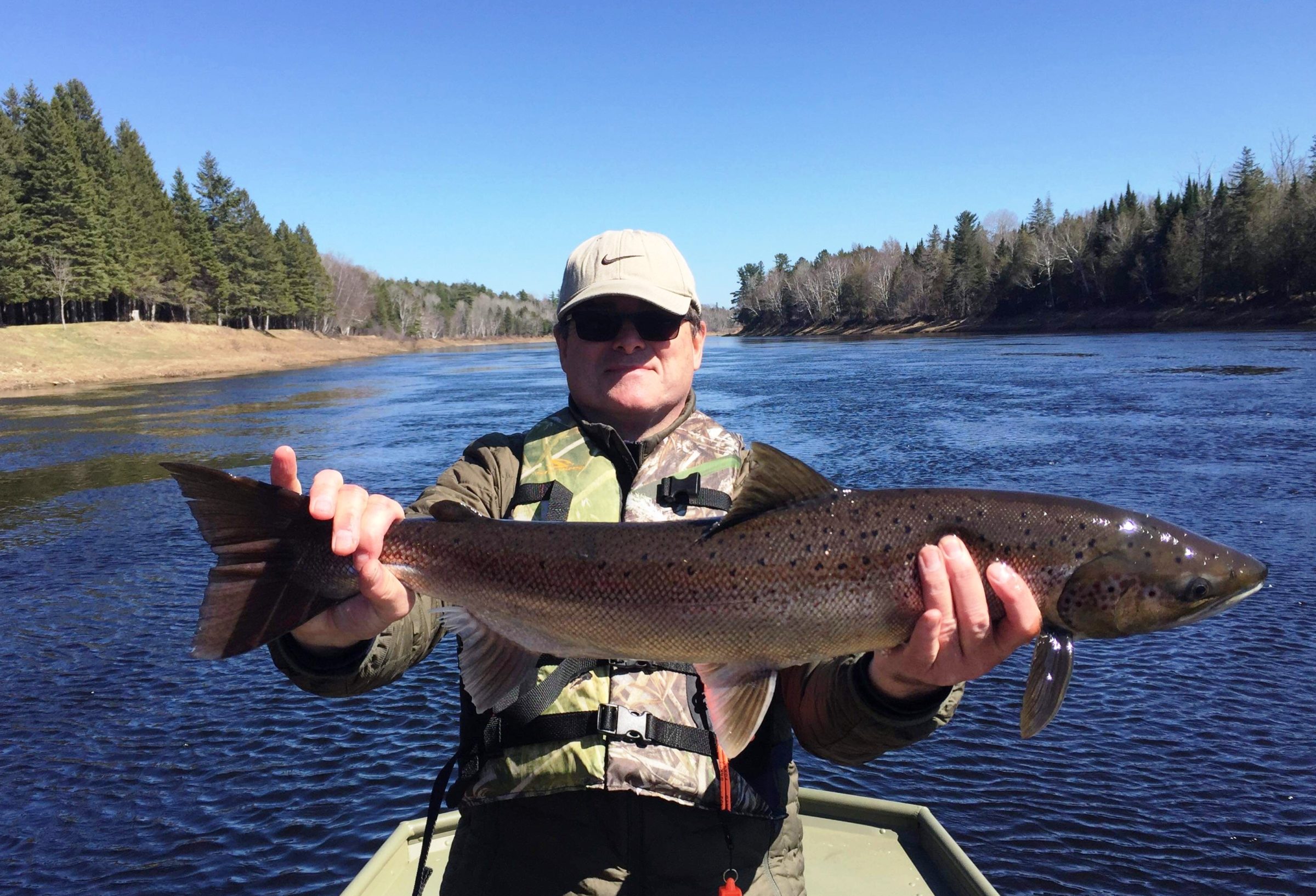 Nice salmon from SWM in Blackville.

All of a sudden the Atlantic salmon season on the Miramichi is open, and by all reports that I have opening day was a welcome success.  In addition to the great fishing reported the weather was sunny and comfortable and the river was at an excellent fishing height. 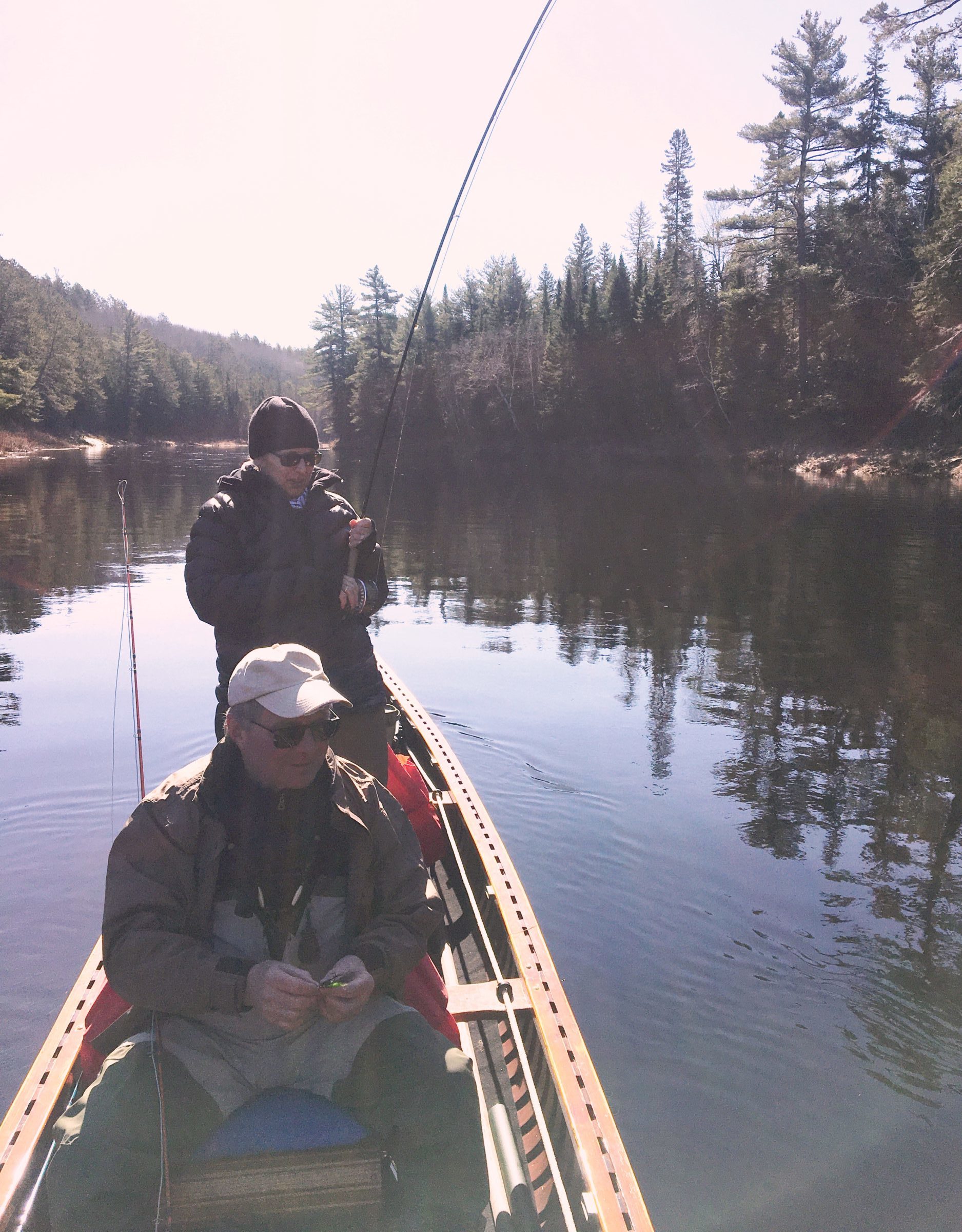 Grilse on the line.

Jason Curtis took Bryan Burgess and his wife Mary Jane – new owners of Red Pine Camp down at Hell’s Gate – up the Cains River to Mahoney Brook for the trip they had purchased during the winter auction. 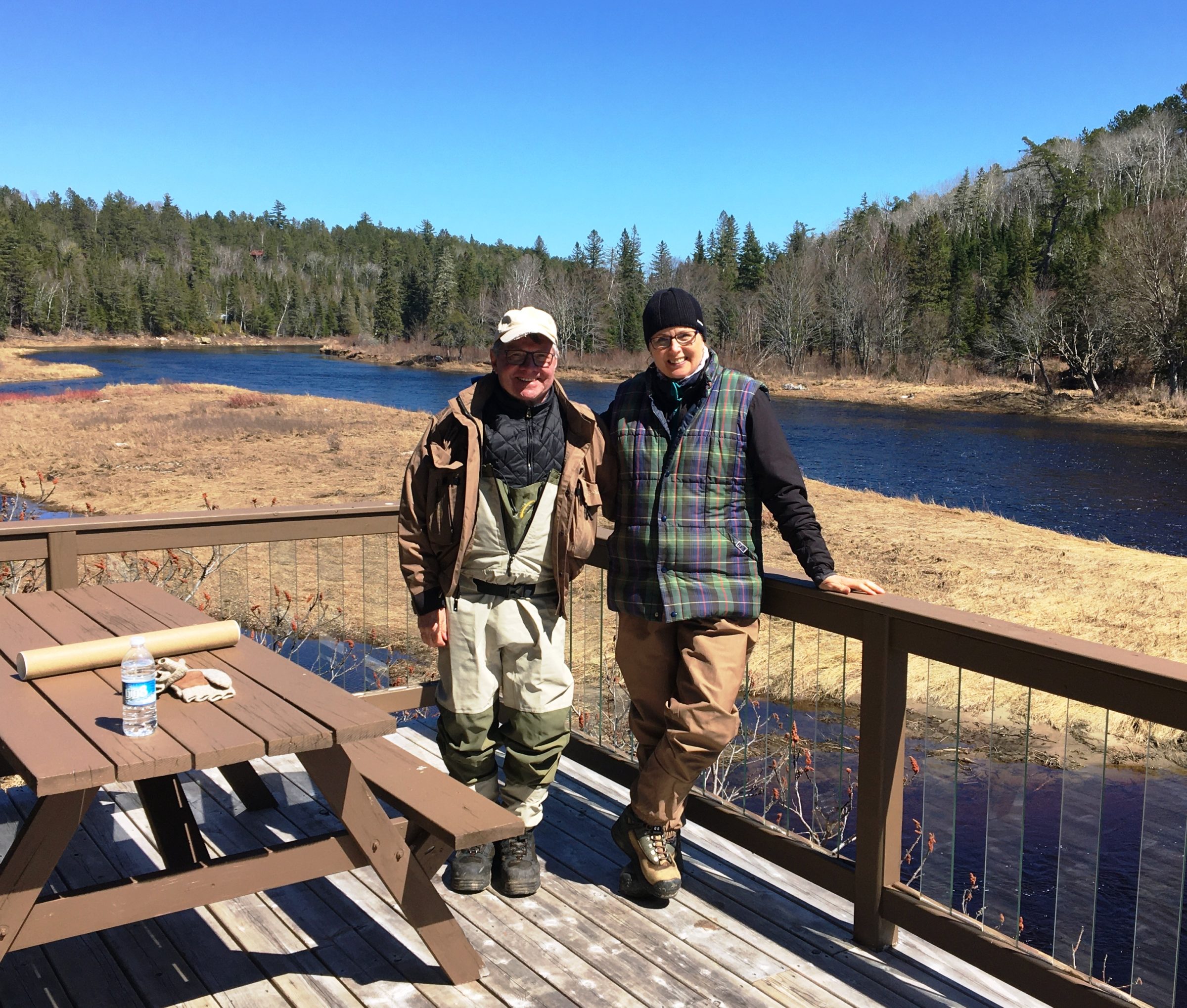 Though the river was lower than normal for this time of the season Jason made it all the way without a scrape.  They enjoyed a traditional lunch of hot dogs slathered in barbecue sauce, and toured the Cains River and its camps over the 20 miles from Mahoney Brook down to the mouth.  There wasn’t much time to fish, but they did do a little and landed one grilse and lost another.

Some serious fishing was done by Byron Coughlin’s guides and sports at Country Haven, and they were all smiles.  Axel Lurche landed a monster salmon. 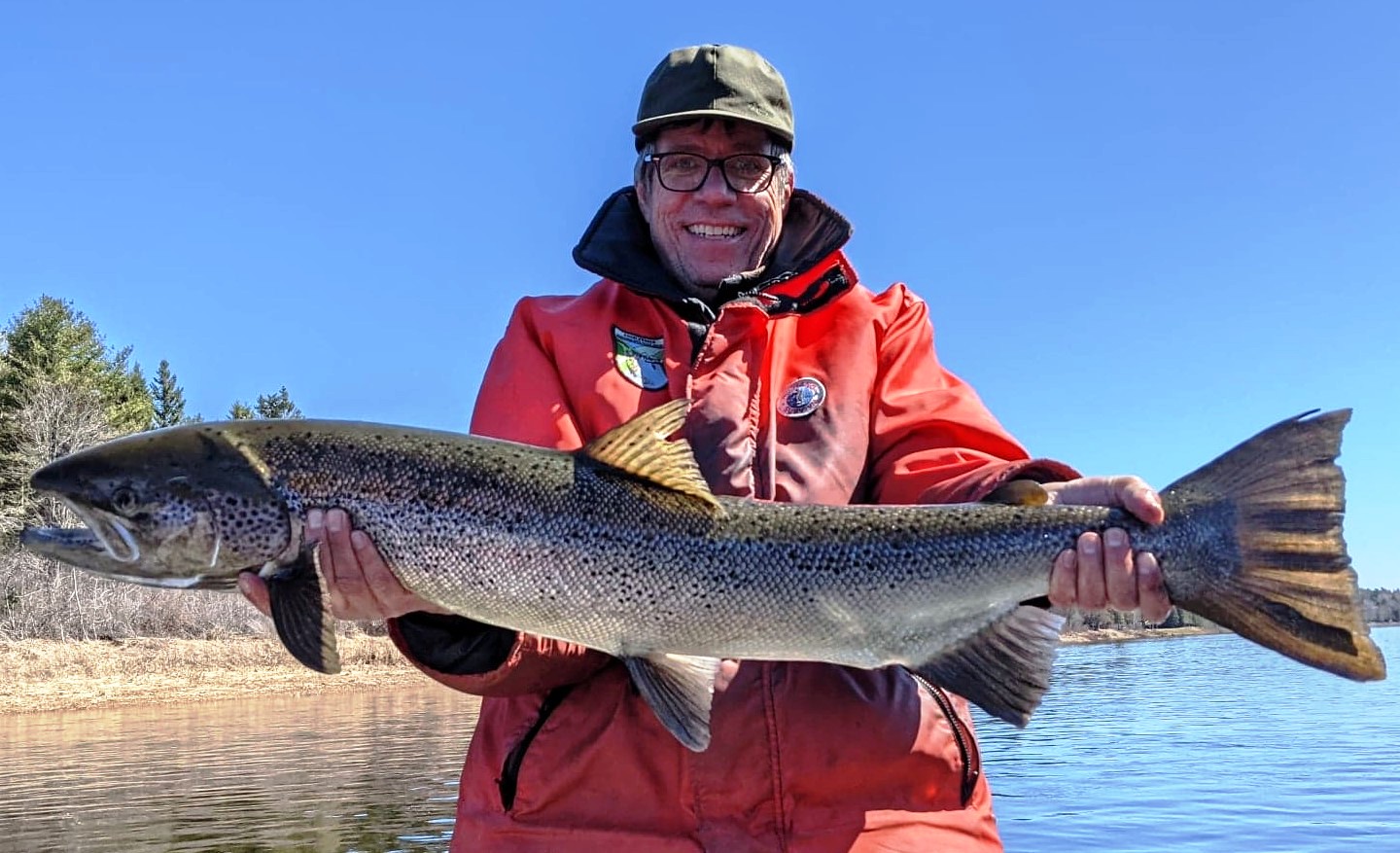 This fish looks to be 50 inches or more in length.  Very few fish this size are ever hooked during the bright season – perhaps big females like this are just too fixated on spawning – but in the spring they put on the feed bag to rebuild, and every now and then someone gets lucky.  That fish will drop down into the ocean and feed for as little as 90 days before being back as a consecutive spawner, or it may spend a full year at sea with the possibility of returning as a true Miramichi monster.  Biologists feel a lot of the decision revolves around the feeding.  I was on a zoom meeting this morning where Nathan Wilbur of the ASF commented on the good fishing yesterday, and he said that there were lots of smelts in the river.  That is just the thing to quickly rebuild these big kelts. 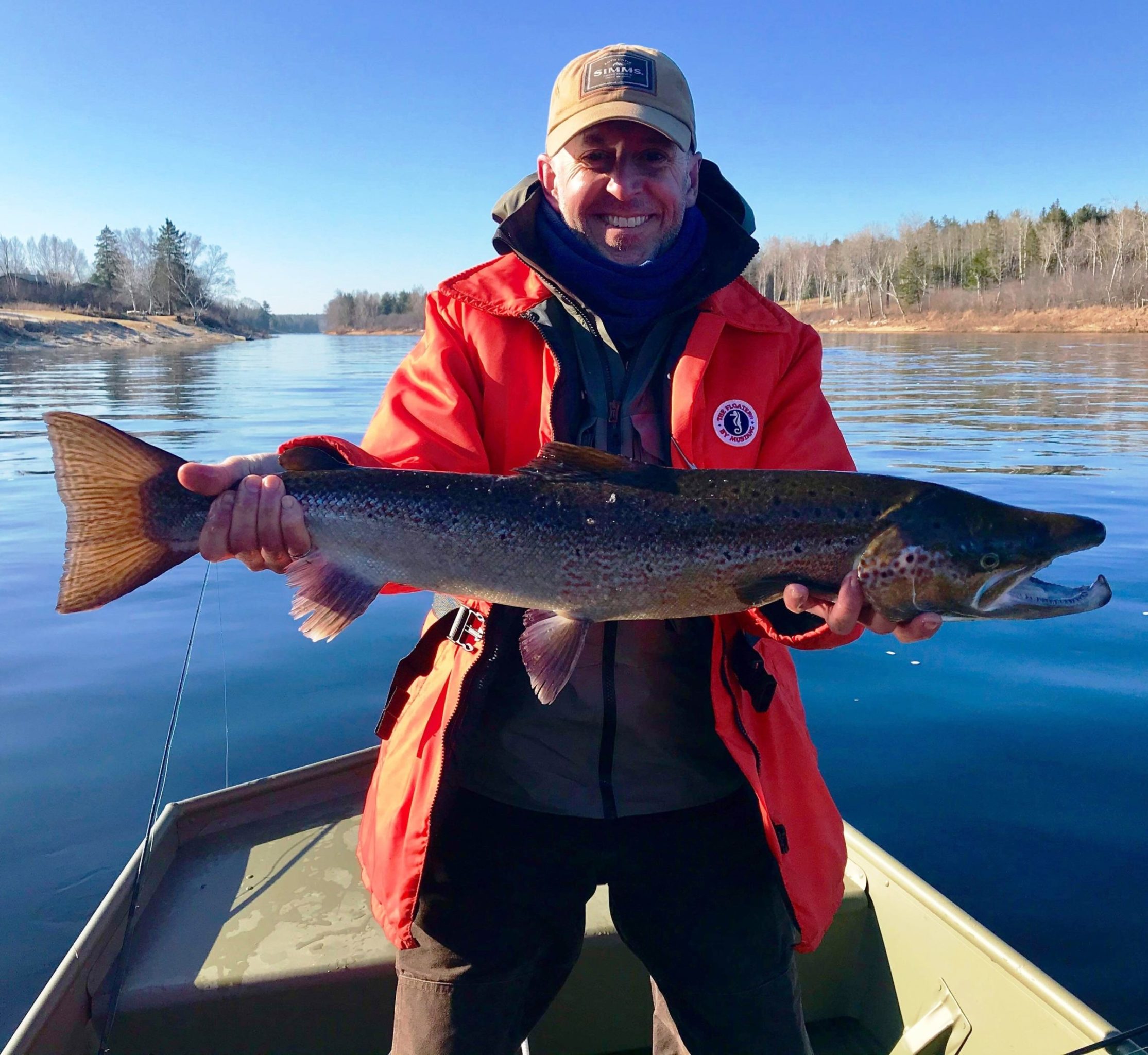 Perhaps it’s a testimony to how well the salmon overwintered in the river this year to see such a nice, large hookbill as this one caught by Ian Cavanagh in the spring fishery.  They are often few and far between in the spring.  They may either leave for the ocean early, or often fail to survive the winter due to the aggressive nature of the fall spawning ritual.  This one sure looks healthy.

I got an e-mail from Jeremy Scott, formally of Halifax, but now living in Moncton.  He is brand new to salmon fishing, and after reading about it in my blog booked some time at Country Haven.  He sent me pictures of several fish that he caught today including this one taken near Doctor’s Island. 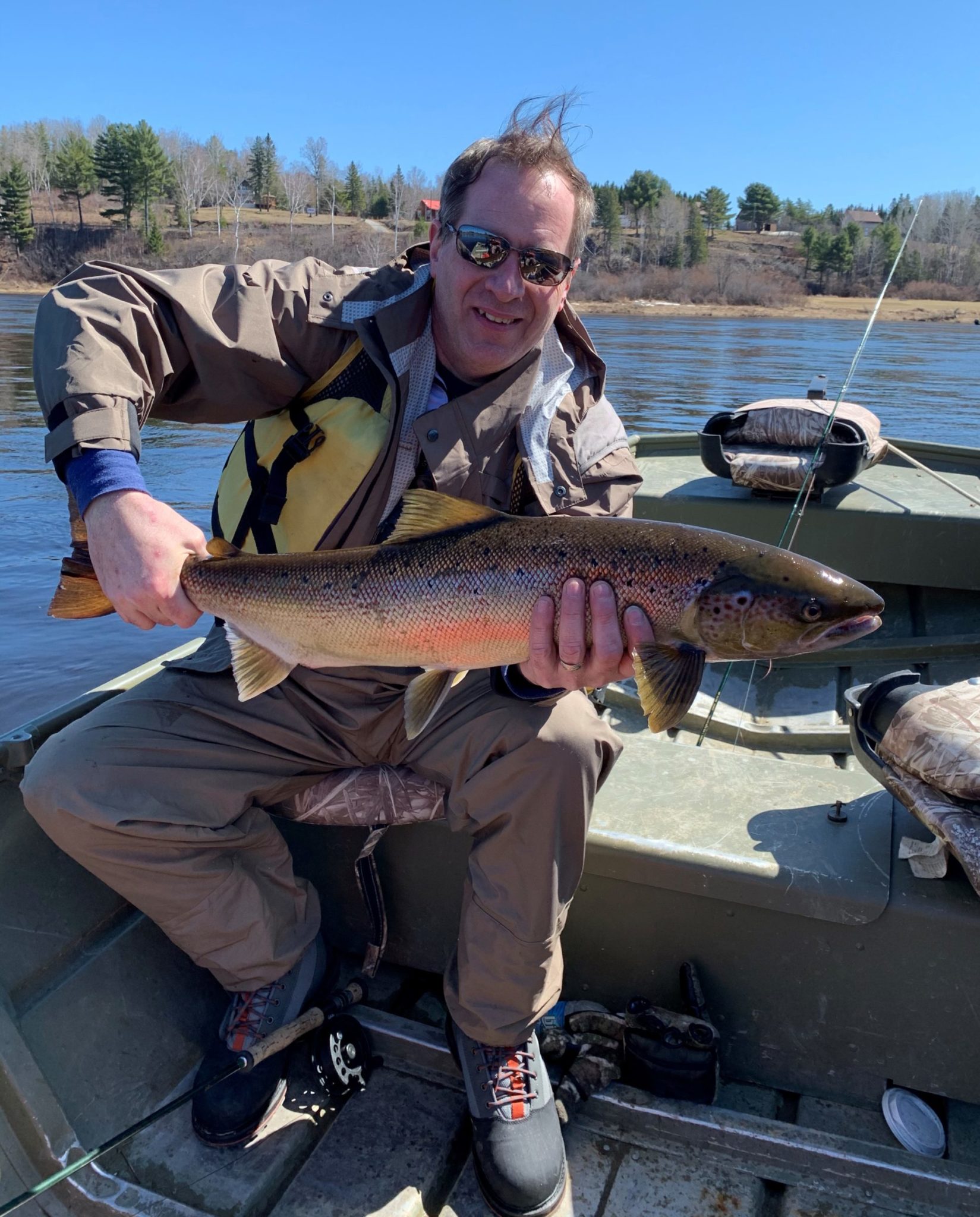 Jeremy Scott with a hen salmon. These slightly darker colors are common early in the spring season. The fish seem to turn more silvery later and further down river. 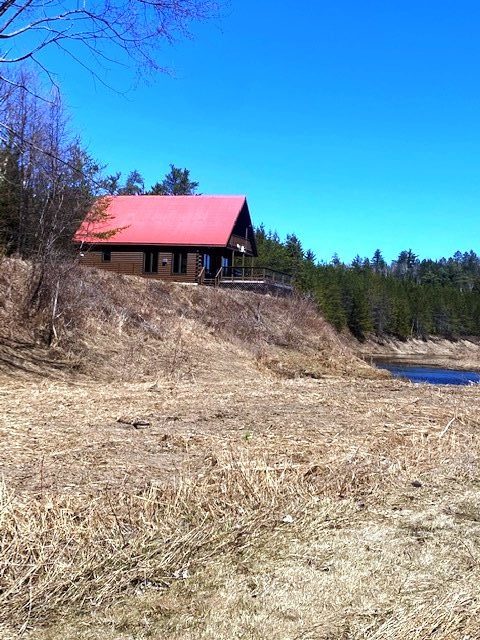 Byron Coughlin had reports from as far upriver as Blissfield, and down below Quarryville.  All reports were the same, and that was of the best opening day action in quite a few years.   Everyone was limiting out today.  This further validates the anecdotal reports of strong bright fish runs last summer and fall.

Wayne Curtis, whose writing many of you are familiar with, sent me this wonderful little story about his own opening day outing.  I’m sure you’ll enjoy it:

Brad – I went black salmon fishing today for the first time in years. I drove around to your lane, parked at the road and walked out past your camp to the river.  Boy your property is well groomed, not a blade of grass out of place. And you have some nice pine trees along the lane. You have built a sleeping camp since I was there. Anyway I walked down to the river and on down to Charlie’s Eddy where I used to fish with Harold Campbell and I casted from shore with a number two smelt. It was a warm day and I got a sunburn. I caught two grilse there in the eddy and then walked back, stopping at your little shed on the river bank to rest and have my sandwich and coffee from a thermos. Then I drove around to my own camp and played myself out raking pine needles. The river looked great today, but rather low for so early in the season. There were different shades of blue depending on where the breeze ruffled the surface. So I fished with the ghost of Harold Campbell. I hope the virus ends soon so things can get back to normal. But with no snow I wonder how low the river will get? 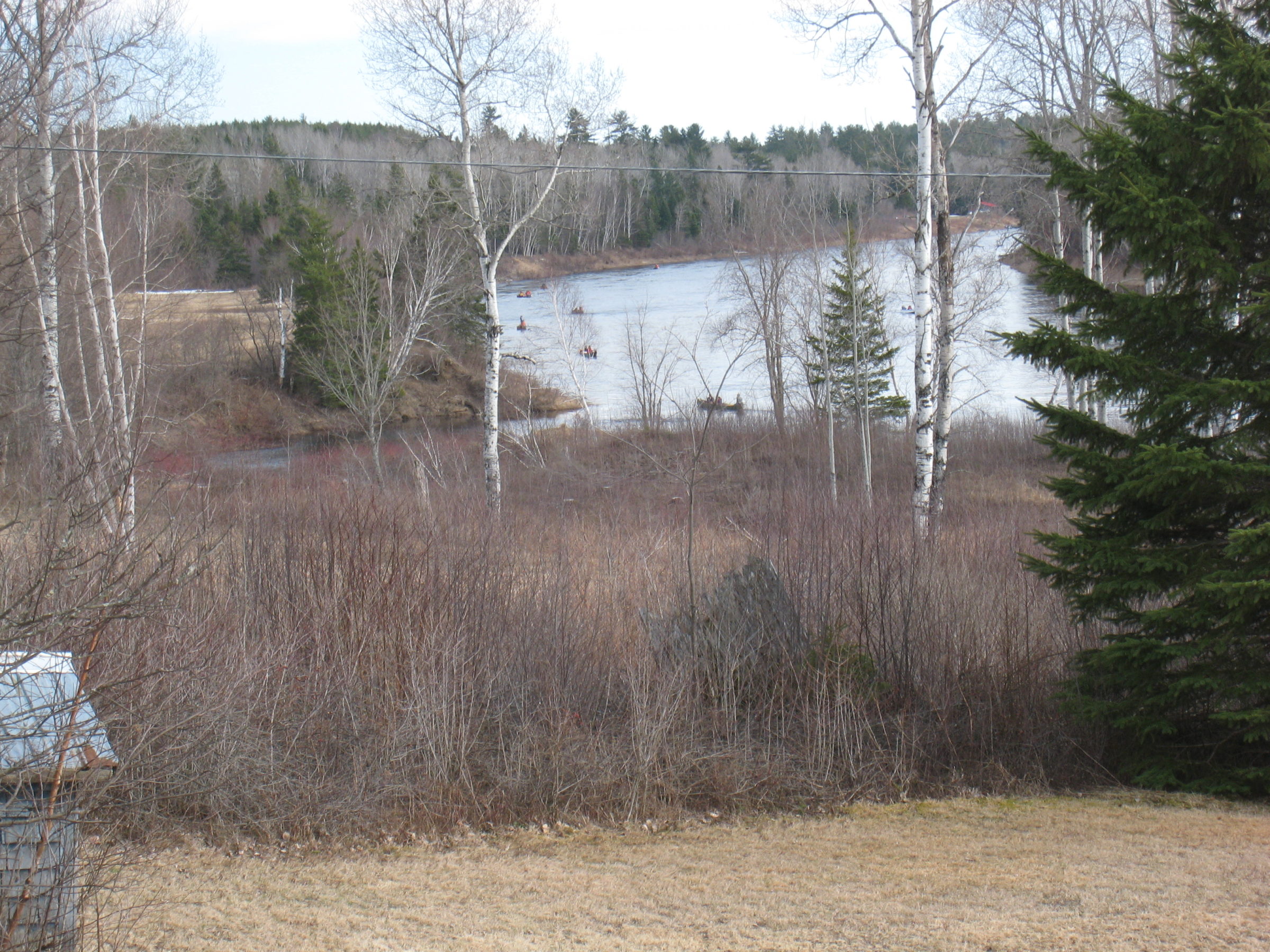 A spring salmon scene 10 years ago of boats fishing a stretch called the Golden Horseshoe just upriver of Campbell’s Pool.

Unfortunately, due to Covid, very few people other than New Brunswick residents will get in on this early action.  Everyone is hoping that will change before bright salmon season, and the whisper date is July.  Let us pray.

The snow is out of the woods, and while we don’t know how much rain the next month will bring, favorable conditions for the summer run to begin could come early.  It will be interesting to see when the first bright fish are caught.  Jason Curtis caught one at Campbell’s last May 31, and perhaps we’ll see that again in 2021.

Thanks for reading, and feel free to leave a reply or ask questions below .  Brad Burns