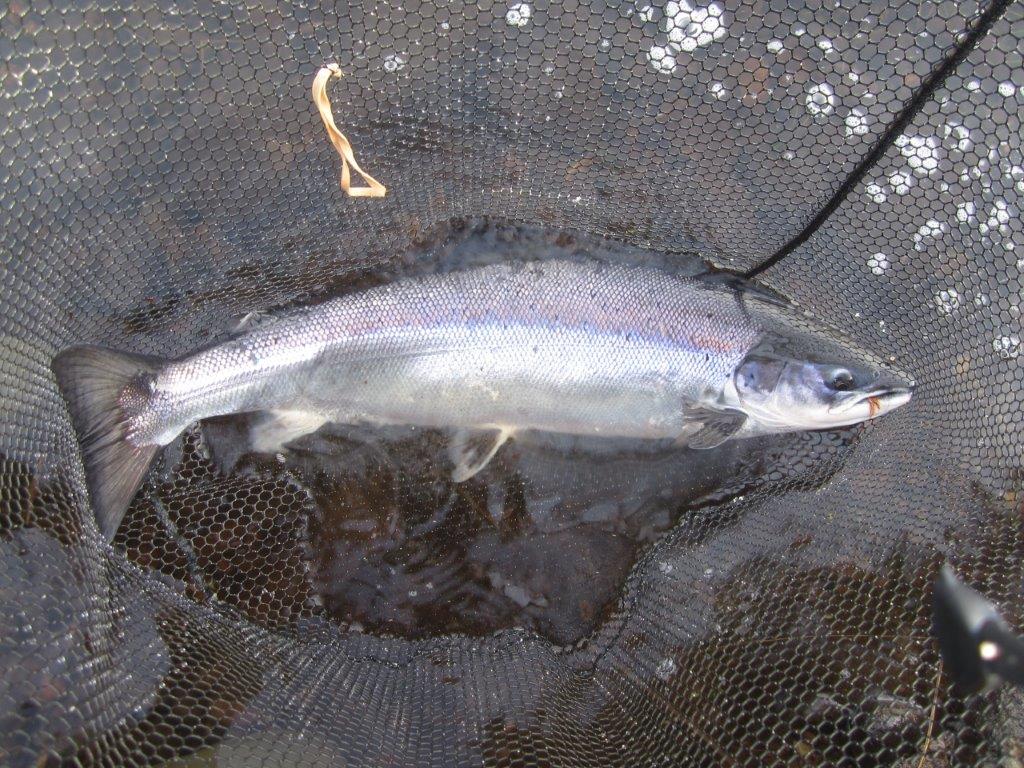 A perfect springer caught by Iain Ogden on the River Naver

As I said in the “Springers or Spring Salmon” blog that I posted on March 3, the success of the Scottish salmon season often seems to be a harbinger of what will take place during the summer on the Miramichi.   That’s not surprising I guess since many of the Scottish and Miramichi salmon both spend their winters together off the west coast of Greenland.  But there is nothing more difficult to predict than the success of a future Atlantic salmon fishing season, or even of a particular week from just a few days in advance. 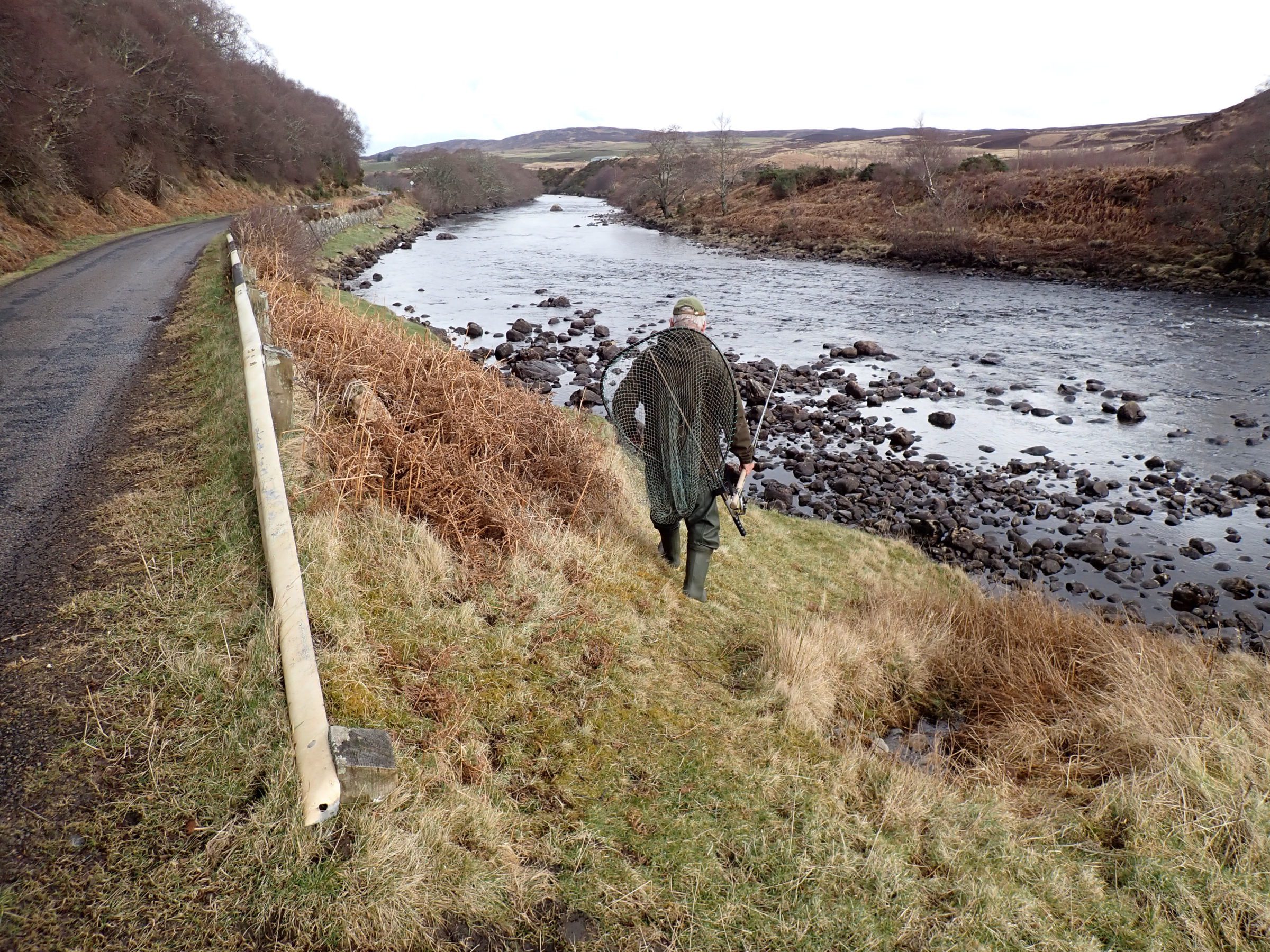 Ghillie picks his way down during lowish water at Parapet on Beat 5.

The week beginning Feb 28th was a very good one on the northern rivers.  The Naver, a small river, ended up with 10 springers for the week, and the nearby Thurso and Helmsdale did well also.  When walked into the fishing office at Syre Estate on Monday morning to meet our ghillie for the week everyone was very optimistic for continued success.  It happened for some, but for my group of 4 very experienced anglers it proved elusive.  The weather was okay, dipping to the normal high 30s at daybreak – one morning with frost – with a daily maximum temperature of near 50F.  To make the picture complete during most March weeks you need a decent amount of rain to come in off the stormy Atlantic.  That never materialized until the last day or so, and the lack of water produced a dearth of new fish. 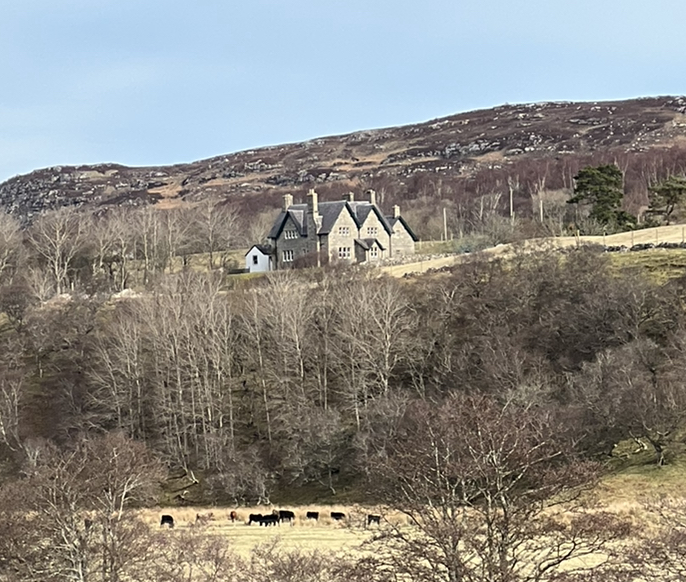 All these Highland Rivers are, to varying degrees, “spate rivers,” and that means that they rise up quickly when it rains, and fresh salmon from the sea enter the system.  The same rivers also fall relatively quickly, and that shuts the door for new arrivals.  Fish in the river can quickly pass through the system, and you are left with few fish until more enter.  That was our story.  There definitely were a few still around as fishing Monday afternoon on beat number 6 – the most seaward beat, and often a good place to find freshly arriving fish – as I hooked a good springer that we estimated at around 15 pounds.  This fish was sitting in a quite non-descript pool almost directly in front of the lodge house at Skelpick Estate, not far from the mouth of the river.  Some springers are absolutely full of “piss and vinegar” as an old expression goes, and this was one.  The fish took a copper tube Willie Gunn fly fitted with a double hook on the mid-swing.  It tore back and forth, and came in and out of the water from several directions. 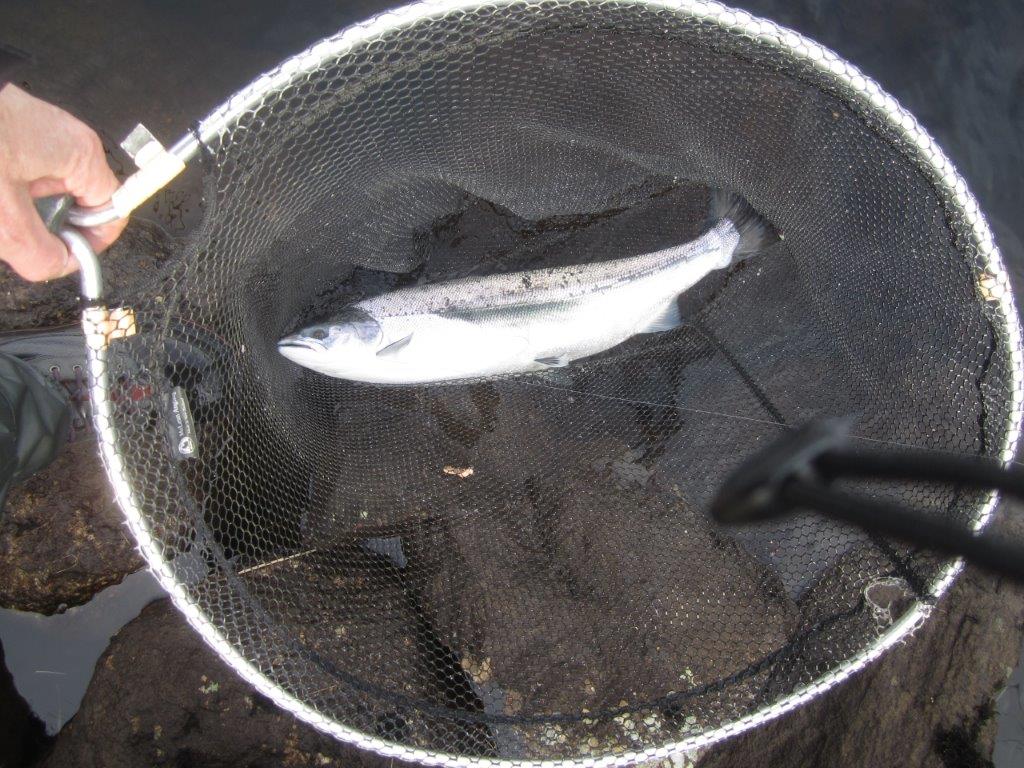 Iain holds a “wee springer” in the net before release.

After about 10 minutes it really started to calm down, and I thought it was coming my way quite nicely.  Suddenly the fish came vaulting out of the water head over tail in a spectacular cart wheel, and threw the hook.  Usually those doubles, embedded in the corner of the jaw from a nice mid-swing take, hold like crazy, but not this time.  It turned out to be the only fish that I hooked all week.

Normally catch numbers in early March are boosted by hooking a fair number of kelts.  I’ve caught as many as several dozen on earlier trips.  Kelts were very much absent in 2022, and the ghillies explained it by saying that the winter had been mild with some terrific rains and resulting raises of water.  It was believed that the high water had simply lured the kelts back to the sea earlier than normal – I hope so. 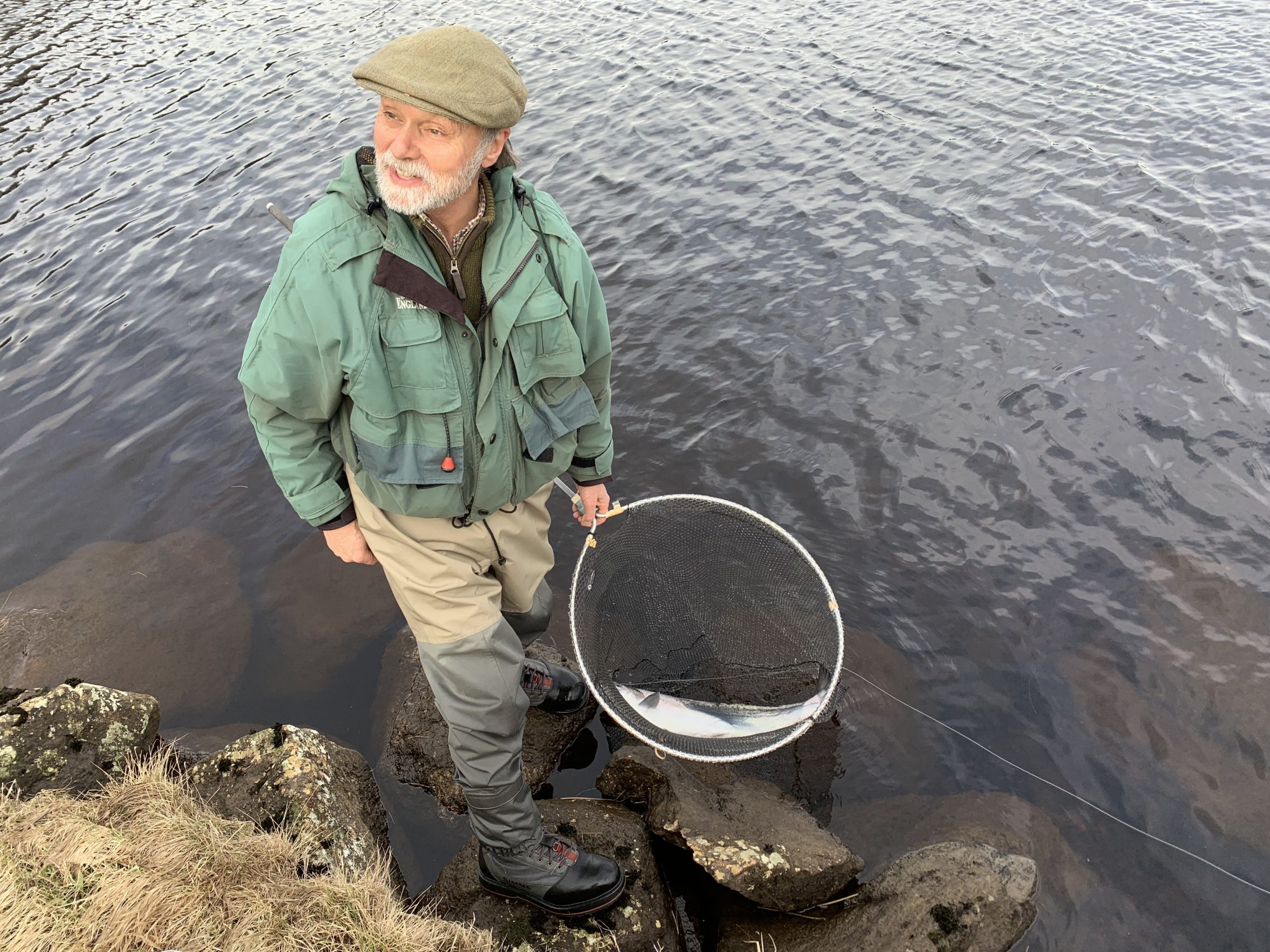 Other members of my four-man group had no better luck, with only one of us landing a fish for the entire week.  Some anglers, though, like my friend Iain Ogden, author of Great Salmon Rods of the Dee and Spey, and his friend had 5 for their week including one each from the same pool on the last day of the week.  They were located adjacent to the river mouth on Beat 6.  There had been some rain on Friday and Saturday morning, and it is likely a fresh batch of fish was entering.  Likewise, on Monday they had two on Beat 1 to start the week.  This beat ends just as the river reaches Loch Naver, and while it is a great beat during much of the season, it is considered a poor early beat as fish that get that far are often hustling onward to reach Loch Naver where they will spend the summer.  These fish were very likely the tail guard of the earlier week’s good run, so it was to at least some degree an excellent case of right place at the right time on both the first and last days of the week.  On top of that Iain and Joe are both excellent anglers.  The fish pictures here are from Iain. 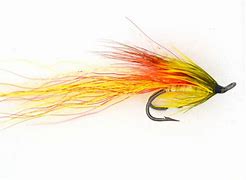 Whenever a salmon angler fails to catch and someone else is regularly connecting the selection of flies comes into the focus.  I would say that in the River Naver’s spring fishery that the effectiveness of the Willie Gunn colorations are held in similar reverence to the Green Machine of Miramichi fame.  Iain and his teammate both had on the same fly all week.  In Iain’s case it was a Willie Gunn, some of which can be seen protruding from the mouth of the springer in the picture at the top of the blog.  Iain’s teammate Joe was using a relatively new fly – you can tell by the off-color name – called the Shitey Whitey aka the Durris Shrimp.  I have no idea where the name comes from because there is nothing at all white about it.  The fly is in fact a Cascade, recognizable by the distinctive palmer-wound collar, and with a tail that is essentially the same basic coloration as the Willie Gunn.  So the operative concepts are a longish, streamer-type fly in red, orange, black etc.  One of my fishing friends, Bill Utley, remembers reading that one Scottish expert said that he likes the long-tailed flies until the water warms to above 56F, and then he goes with more conventional length flies where the materials extends just to the hook bend.  When the first good run of bright salmon appear in the Miramichi around mid-June, the water is already warmer than 56F, so there may not be much of a lesson for us there.

Our teammate, Brian McAllister, who caught our only springer told me that he never uses anything but a black and yellow fly…  I guess it all just becomes more evidence for the old claim that you catch fish on the fly tied on the end of your line. 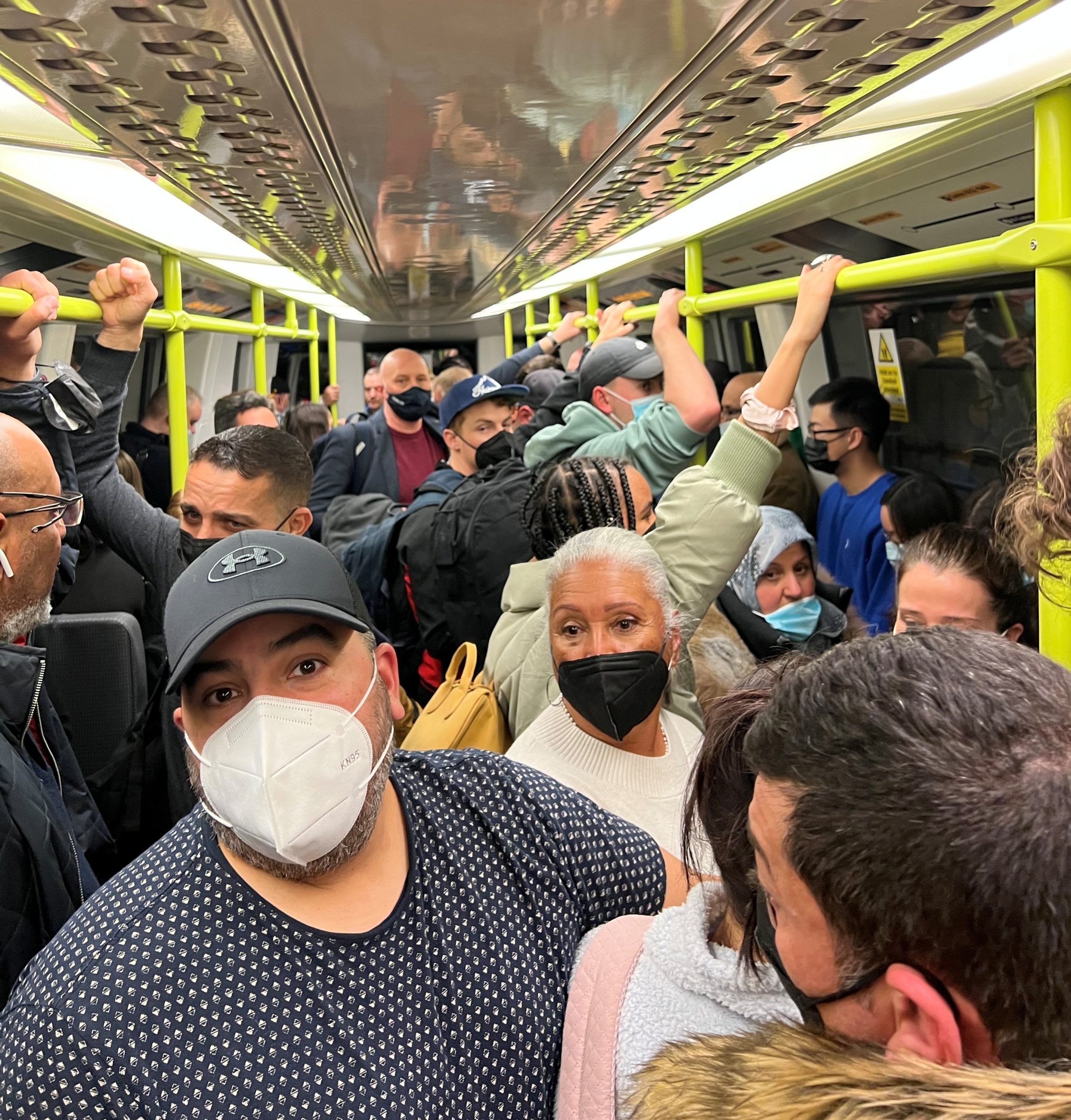 The transit to the departure gate in London’s, Heathrow Terminal #5. The extreme crowding combined with the masks make the scene was a bit surreal.

The trip back from the Highlands to Maine is always a long one, though mercifully it just takes one long day.  I was up at 5:30 and off an hour later.  The day was spent driving from Altnaharra to Inverness, flying to London’s Heathrow, then home to Boston.  There were the usual share of delays and aggravations, and we arrived just in time to miss my 9:30 bus back to Maine.  I finally got away at 11:30 and back to Maine by 1:30.  Adjusting for the 4 hour time change I had then been up and travelling for 24 hours.  Still in all I got in a great week of hiking, socializing with my Scottish buds, Spey casting, drinking, eating, and soaking in great Highland views and salmon culture.  On top of it all I did wrestle with one very good fish.  All this leaves me more than ready for our own Miramichi season to begin, and it isn’t that far away.

The Miramichi River I tried to go online and buy my season fishing license today, but I found that they won’t be available until April 1.  I must say that the new online system is really slick.  I love being able to print out a few copies which I fold up in little plastic bags and stuff into a few spots in my gear so that I will never be caught without a copy should I need it. 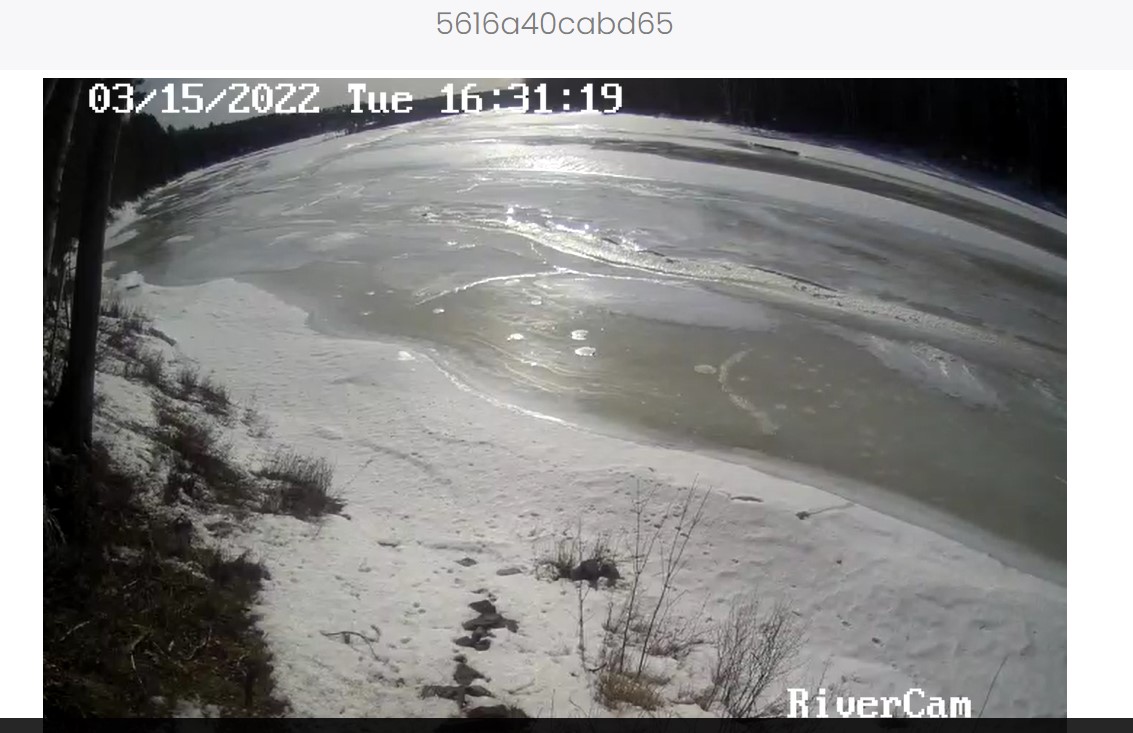 The ice at Bullocks on the SWMiramichi still looks very healthy today.  A great deal of the snow cover is gone.

As you can see from this webcam picture the Miramichi is still covered in thick, solid ice – as it should be.  Things will be changing rapidly now though.  The forecast temps for the next two weeks are for slightly above normal average highs, and nighttime temps next week that are above freezing most nights.  I’m no good at forecasting ice out, but I wouldn’t be surprised to see it on the move before the first of April, especially if we get some rain toward the end of the month.  In any case we don’t have too long to wait now.

A couple more photos from Scotland: 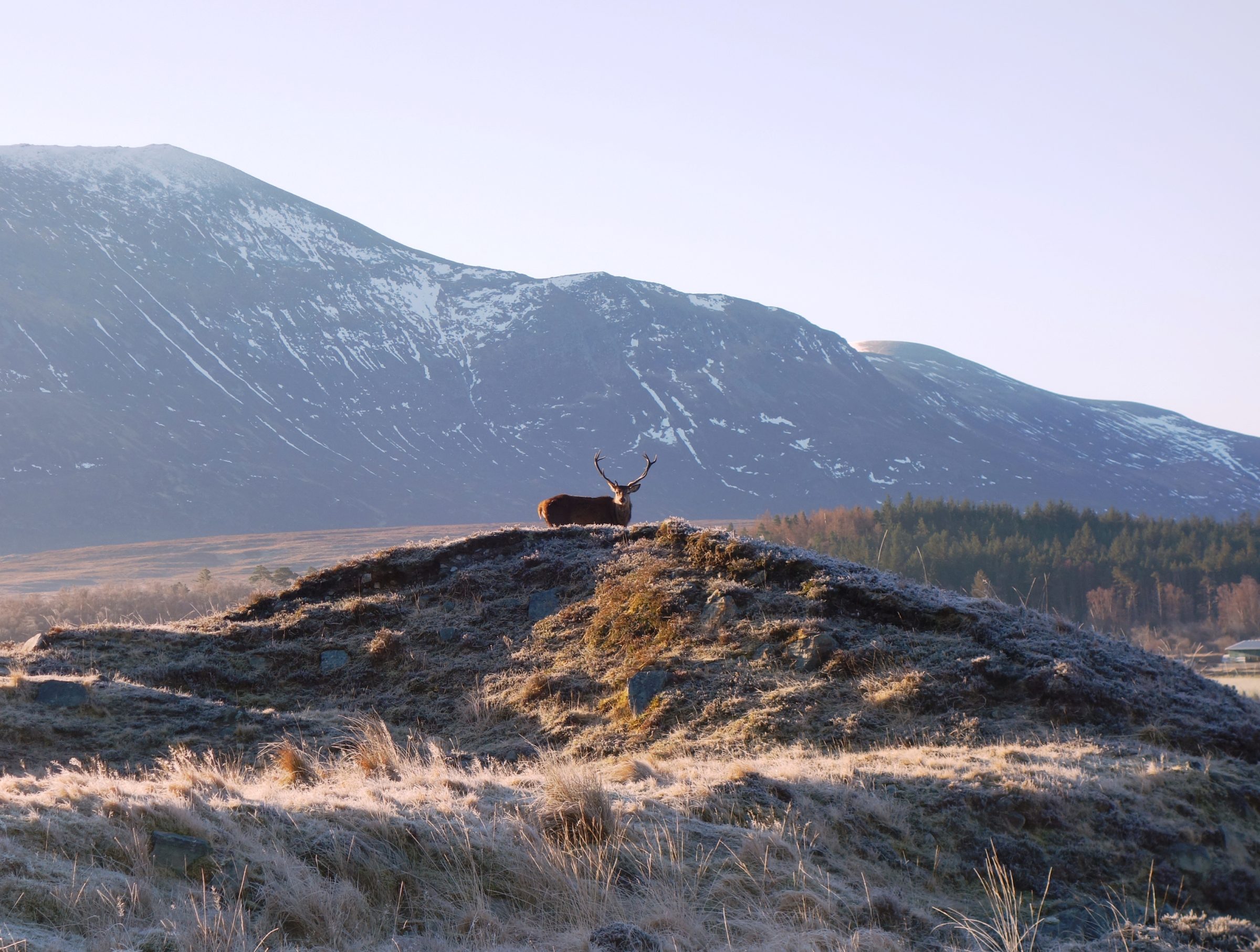 A red stag on a frosty morning. 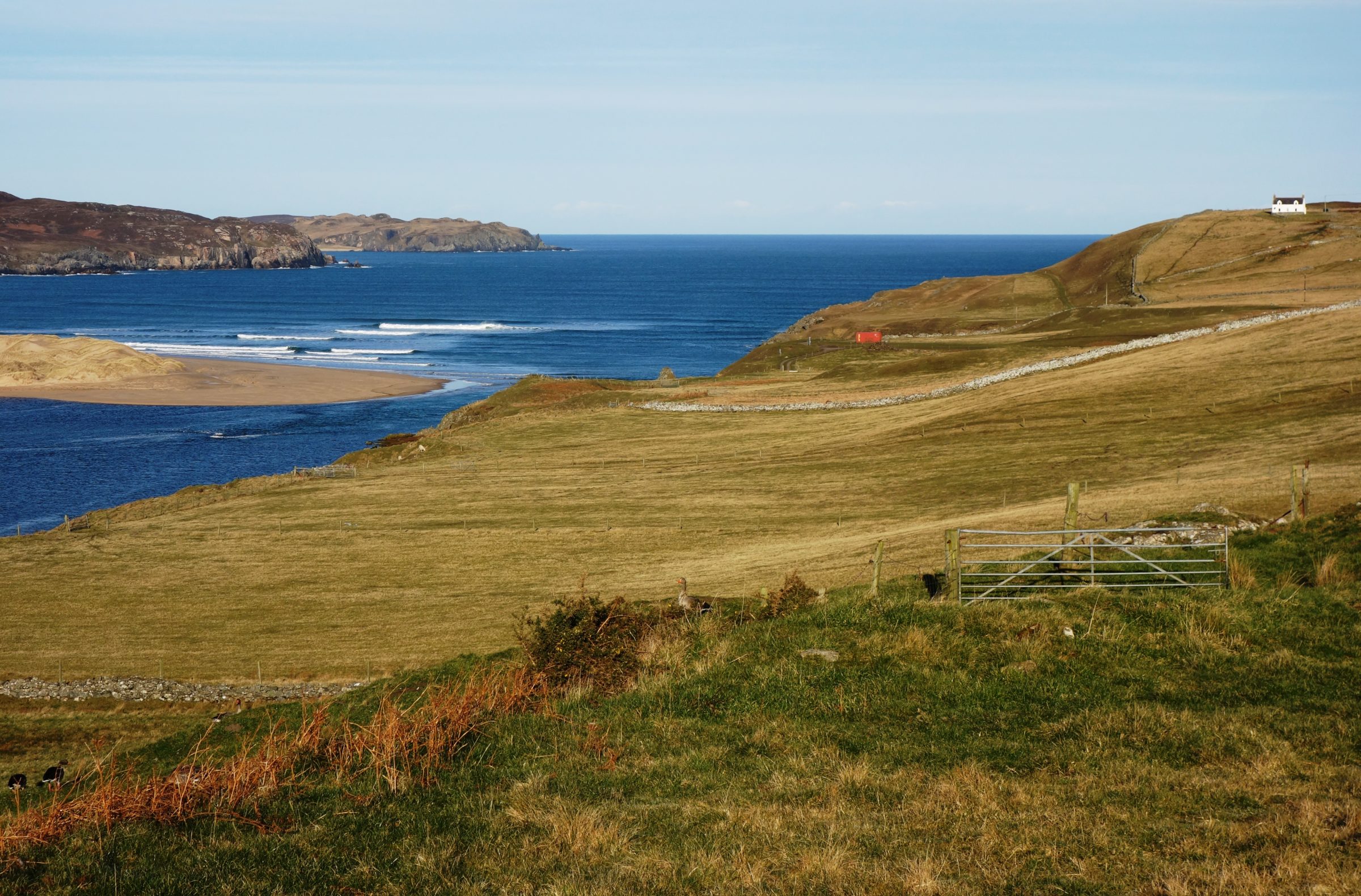 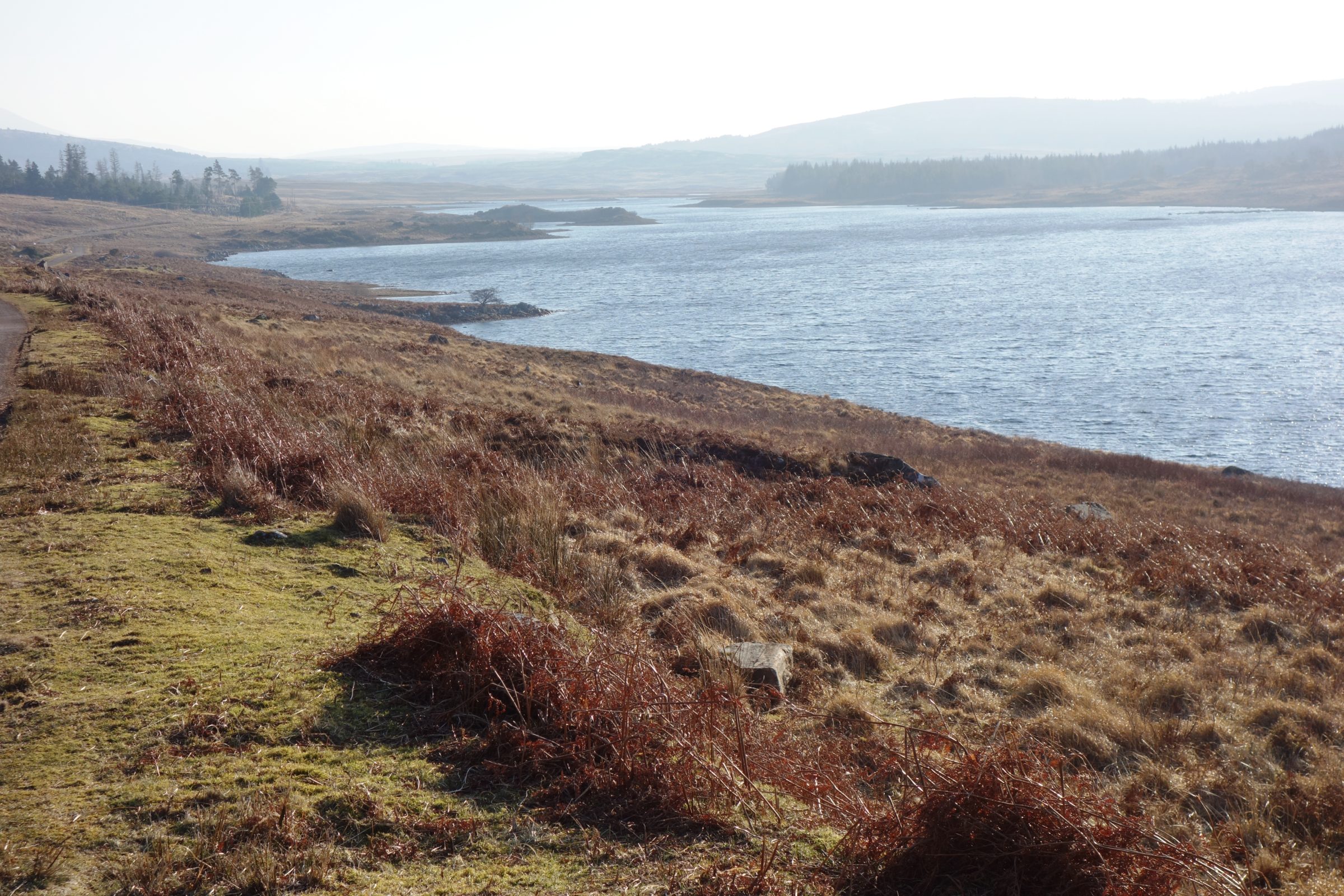 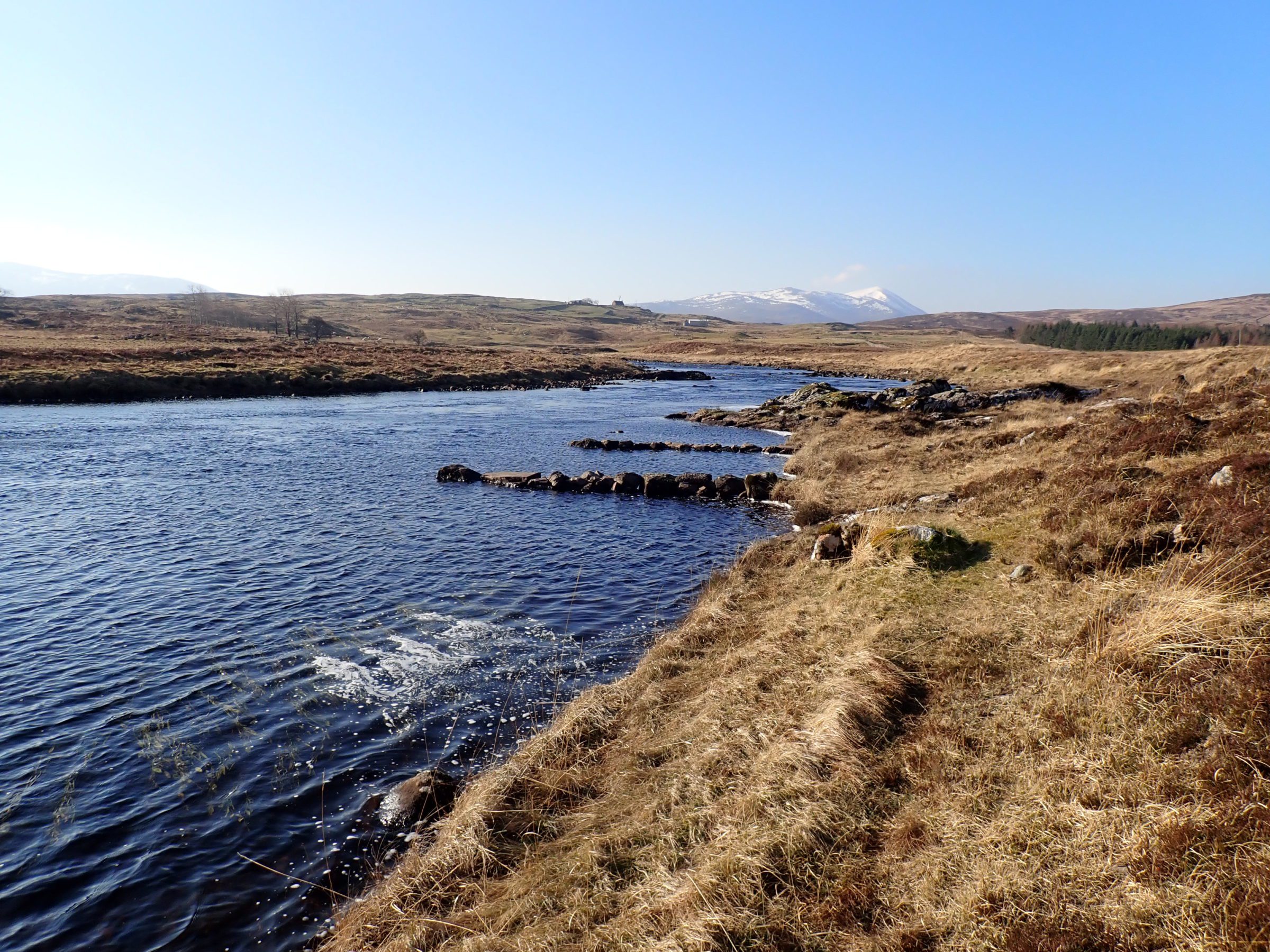 The jetties on Dal Mallart Pool on Beat 1.