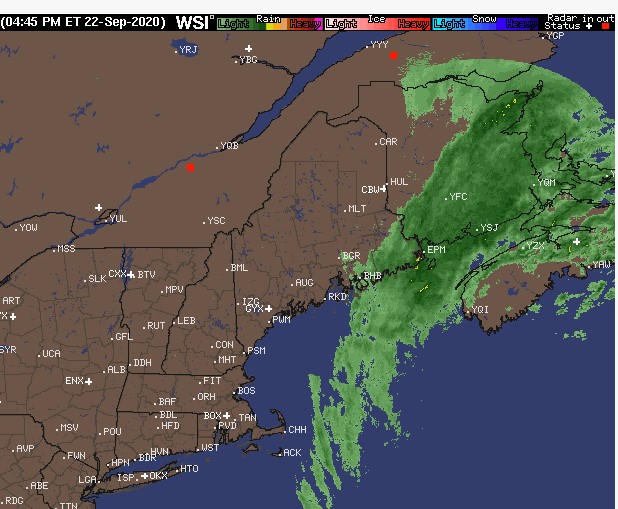 Tonight the remnants of Hurricane Teddy are bringing high winds and desperately needed rain to the Miramichi valley.  It doesn’t sound like there will be a major raise of water though.  First, the rain is falling largely over the Eastern portions and not the much on the broader headwaters area, and secondly the river is so low, and the watershed so dry, that it would take more rain than is probably coming to bring it up to anywhere near normal.  Still, though, it will help the fishing conditions a great deal, and given the strength of the June/July run there has to a good body of fish just waiting to leave the estuary and head in to the river.  The Cains river valley, making up the south and eastern portion of the Miramichi watershed, is more likely to have a good raise.  If a little more rain reinforces Teddy’s over the next couple of weeks the salmon fishing conditions on the Cains could be quite good for the rest of the season. 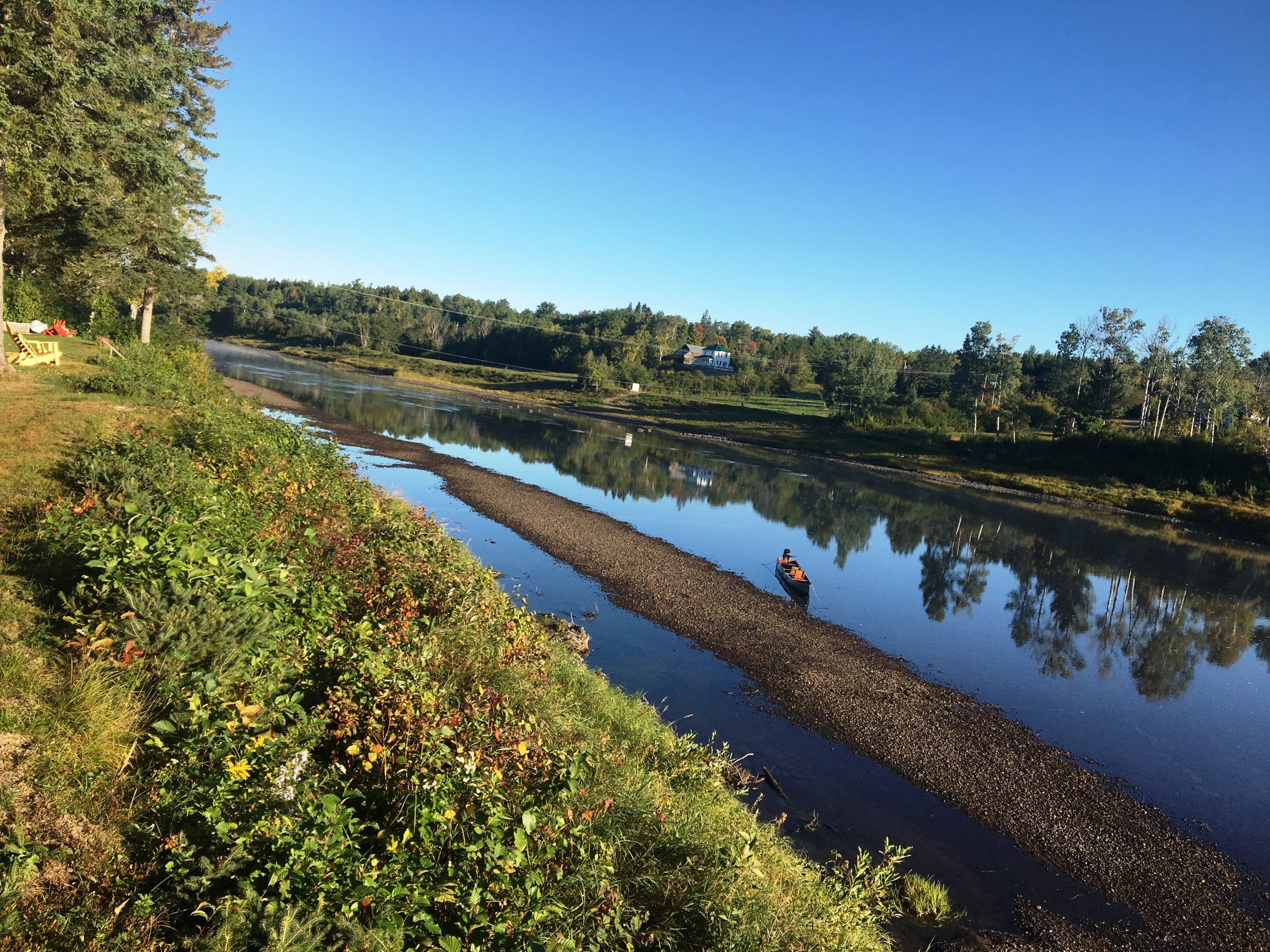 SW Miramichi from Jason Curtis home looking down at Campbell’s Pool. That bar has never been visible like that in my 20 seasons on the river.

The big news for the Americans in my readership is that we have been shut out for the entire season.  I sure don’t blame the New Brunswick people for not wanting a spike in Covid.  Many of us in the salmon fishing community come from more or less rural areas with a relatively low incidence of the disease, but I understand it is hard to develop too complicated a standard for entry.  Still it is really tough to miss the whole season, especially for some of us who own property in NB, pay taxes, and are used to spending extended periods of time there.  I guess there isn’t much we can do now except hope that next year is a lot better. 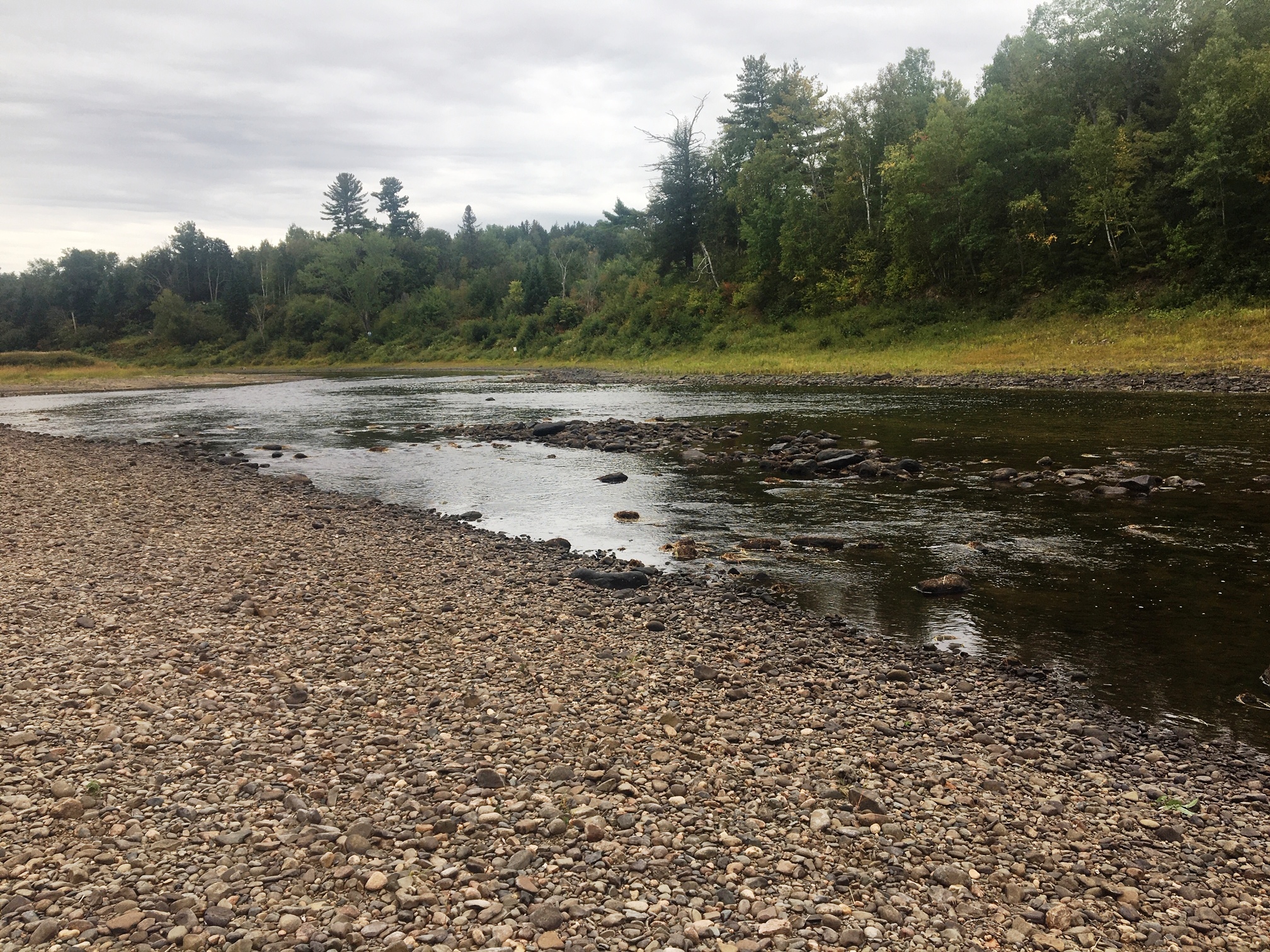 The bar at Doctor’s Island in unprecedented low water.

The fishing since the river first cooled down in late August, has been entirely confined to low water pools.  We are fortunate in that department, but even with good pools for low water conditions there is a limit.  While fishing was pretty good back around Labor Day practically no new fish have been entering the system, and the stale fish sitting in these pools have become more reluctant by the day to look at a fly.   Back on the 16th there was a nice overcast, drizzly morning and Jason Curtis gave the bar at the lower end of Doctor’s Island a try.  The sum total of his efforts was to raise one salmon that refused the fly and wouldn’t come back.  As you can see by the photo above, the bar, which is normally a fairly tough wade, with water boiling along around your knees at a good clip, is now essentially a dry walk! 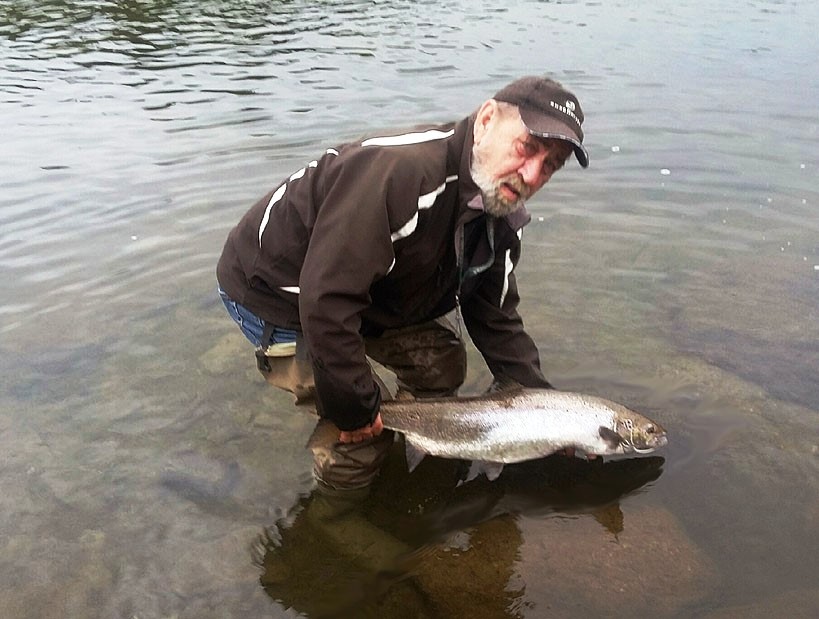 Nothing is more Miramichi than a picture of storied guide Gary Colford releasing a salmon. Keep em coming Gary!

Byron Coughlin of Country Haven was his usual upbeat self.  They have been catching some fish and sent some pictures to prove it.  He is very optimistic about a good run of fresh fish coming in with the raise from tonight’s storm. 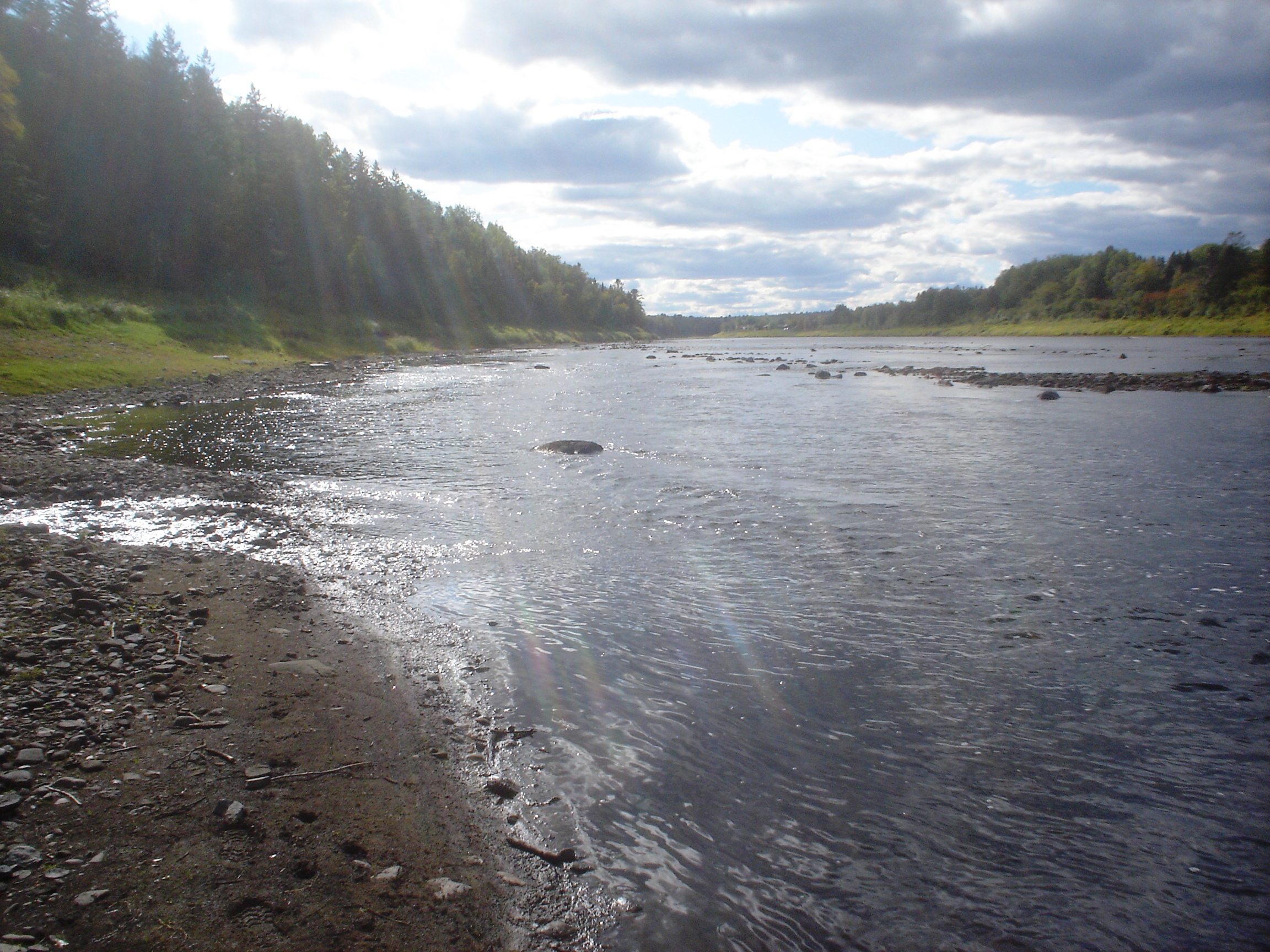 The subject rock at Mountain Channel. The famous brook is visible coming in from the left.

Darrell Warren sent me this picture from Mountain Channel.  Many years back when Vince Swazey was running the camp the water was also very low.  A rock out in the pool was catching the lines of the fishermen.  Vince ordered the top few inches of the rock to be removed and the guides waded out with sledge hammers and beat the rock down to below water level.  In the picture below you can now see that this year the water has reached a new low and the battered old top of the rock is now four or five inches out of the water. 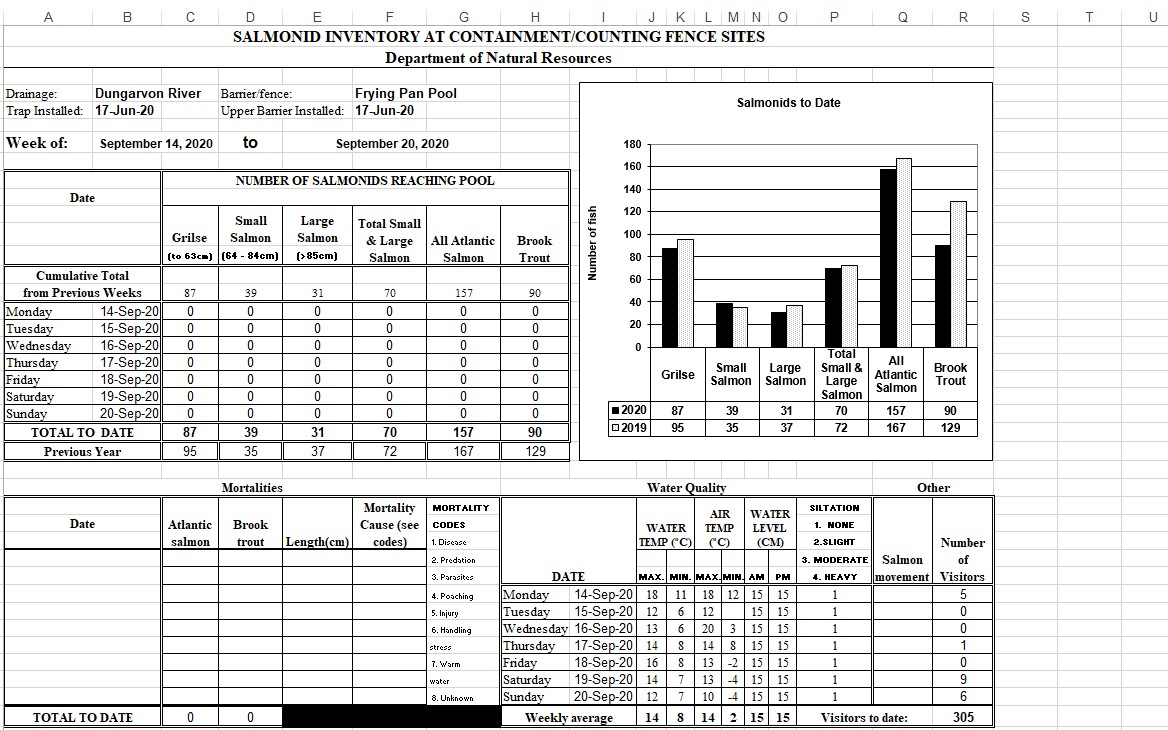 Click on this caption to read the statistics more clearly.

Further evidence of the ultra-low water harming the salmon run can be seen in the Dungarvon and NW Miramichi barrier numbers.  If you go back and read the late June and July blogs you’ll see that the early returns were far ahead of last year in both of these branches.  Now, as of 9/20, the NW is up a healthy 240 to 191, but It had been up by a much greater percentage in July.  The Dungarvon which is apparently more water level needy than the NW, and has hardly seen a new fish enter in the entire month of September, has now actually slipped below last year by a count of 157 for 2020 to 167 for the unthinkably low 2019.  We will have to hope that this rain is going to help to bring in a big push of fresh fish from the estuary.

Wayne O’Donnell, manager of Rocky Brook says that he is running out of work for his staff to do.  There is not much fishing going on now with the very low water levels and pools full of stale fish.  He does say, though, that there are good numbers of fish present in his area, and hopefully that will bode well for spawning.

The late Bill Ensor wrote a piece about fall flies in which he talked about the transition from the small, low-water flies to the big red and orange bucktails.  “You’ll know when it is time…” he said.  My guess is that once the water clears up from the raise that is sure to come from this rain, it will be time.  Bill was always a thinking angler, and he told me that the Ally’s Shrimp was in his view not at all a shrimp imitation, but reminded the large salmon of small pests like precocious parr or brook trout that often crowd the salmon as they prepare to dig redds and spawn. It’s a great question and one that comes up every fall. 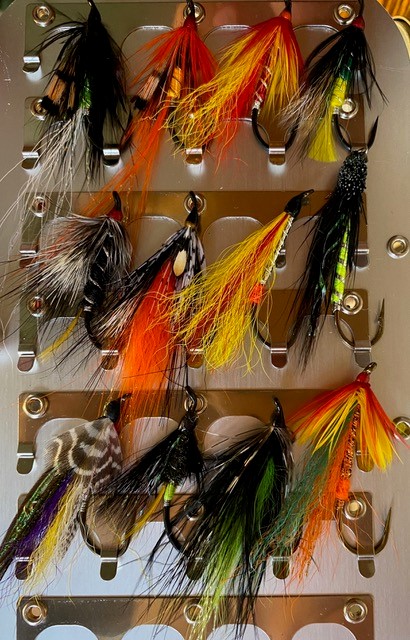 One fall fly that seems to produce a few fish for me every year – sometimes considerably more than a few – is a big marabou streamer.  In those large, slow pools that the Miramichi is famous for the marabou is at its best.  A well tied marabou streamer will wiggle and undulate seductively at almost non-existent current speeds.  You can fish it deep with a sink-tip, or just make a long cast straight across the current, let a big belly develop, and the fly will cover a lot of ground working its way across the pool.  I’ve seen this technique pull a big salmon from a pool that he been very carefully worked with smaller hair wings for a long time with no results. 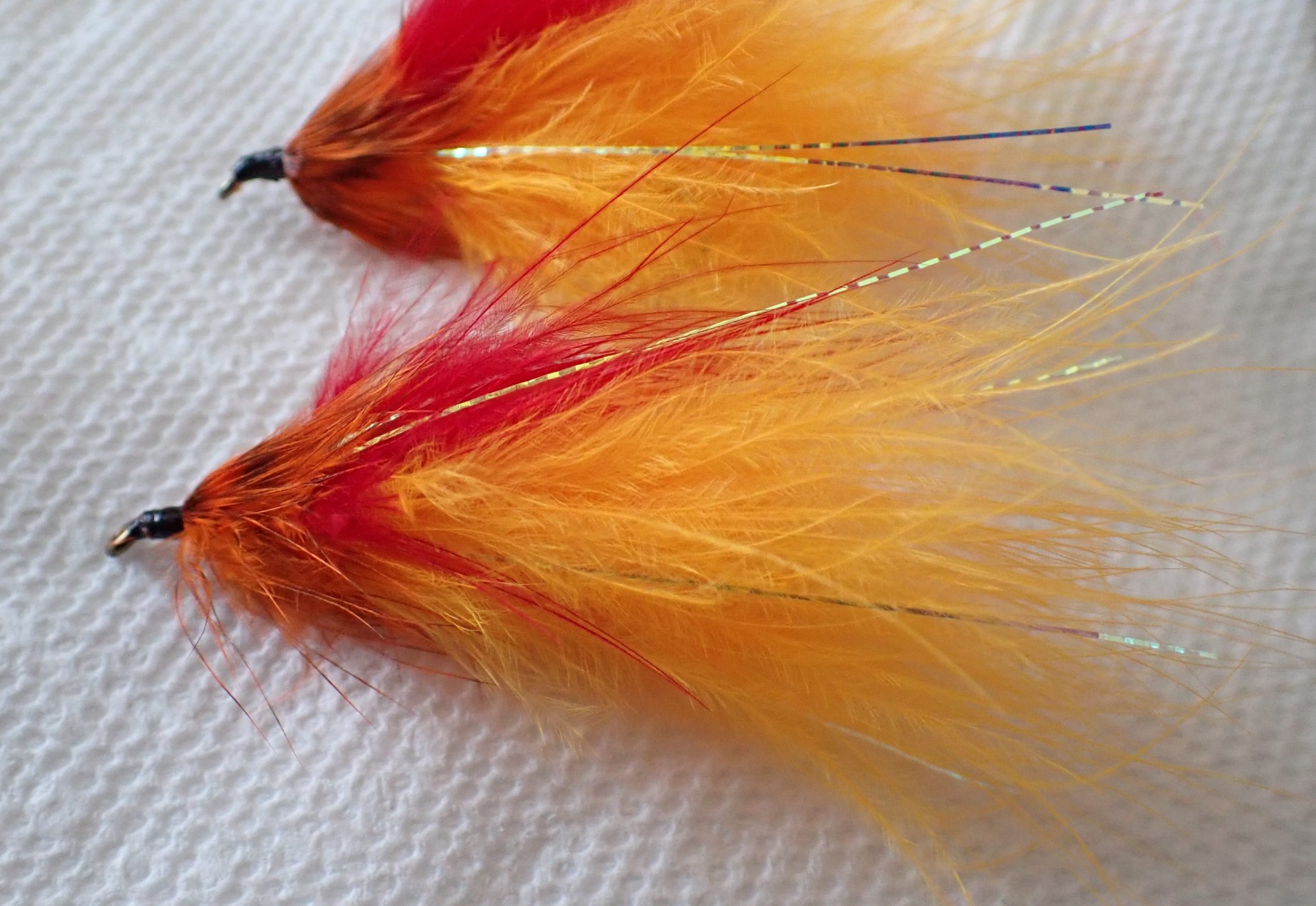 The fall issue of The ASF Atlantic Journal came out recently and I thank them for giving On the Cains a good review.  Right after the ad ran I made a few nice sales of the combo which offers a 50% discounted price on a copy of Closing the Season if purchased along with the new Cains River book.  It has been a very popular offering.

It will be interesting to see how these last 3 weeks of the season unfold.  Based on the excellent earlier season run there should be a lot of fish coming.  I’ll try and stay as on top of what is happening as possible and make a full wrap up report after the 15th.  Sharpen up those long, bright fall flies and let me know how you do.  Thanks for reading.  Brad Burns 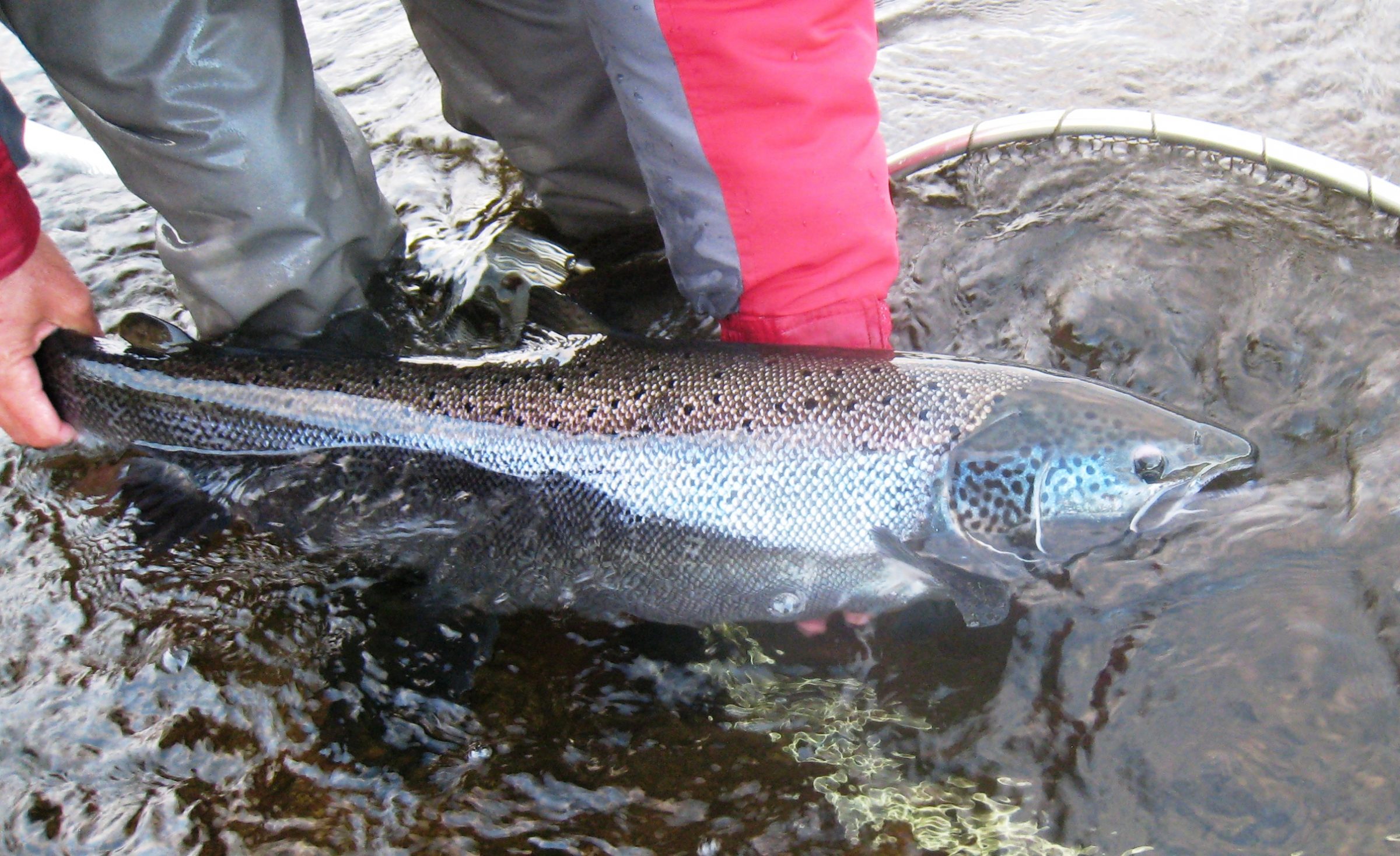 A late fall fish as fresh as they come.