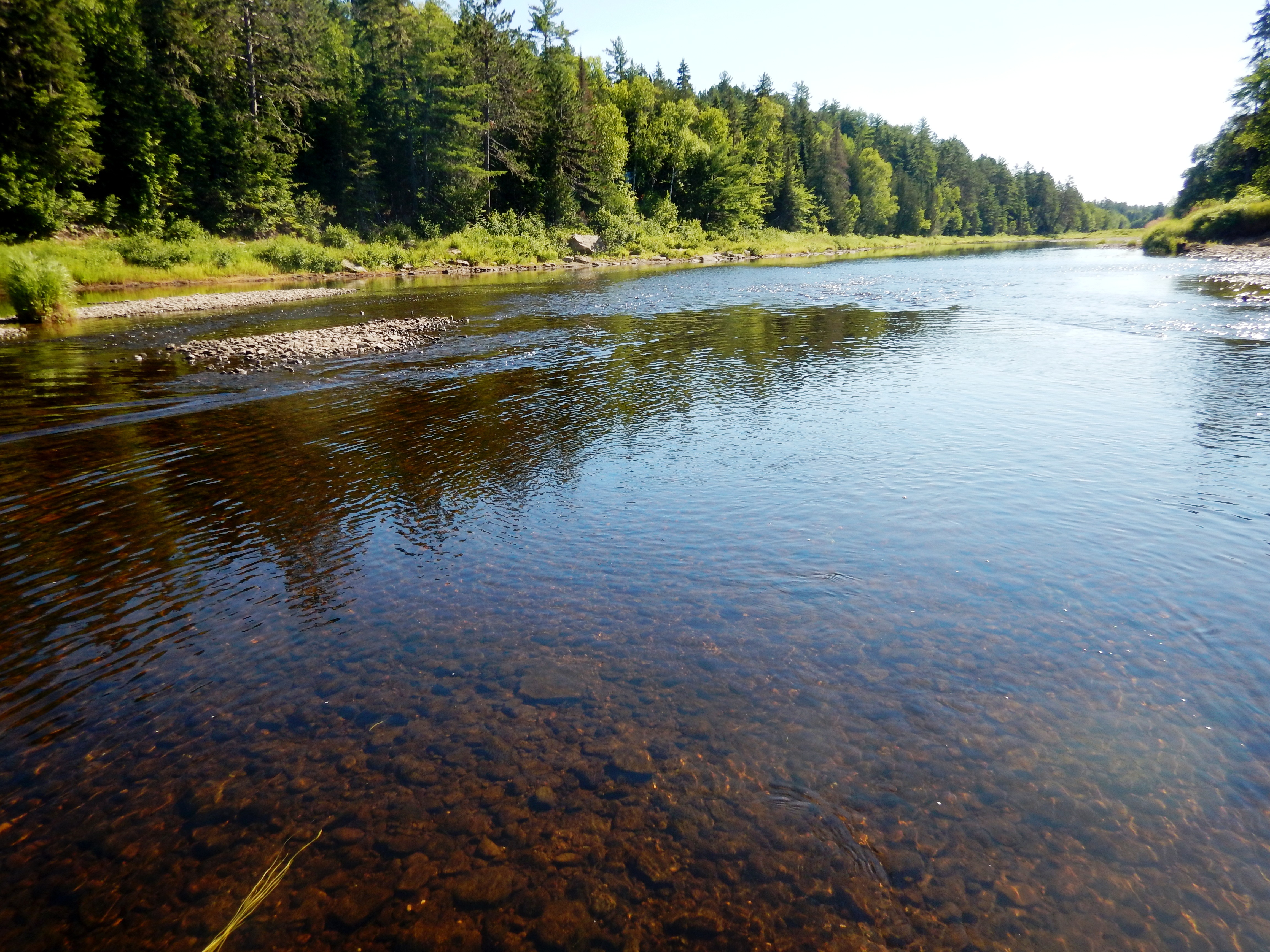 Lovely Channel Through the Gravel Bars on the Cains River

Fishing Friends – This is turning out to be a very difficult July for Miramichi system salmon fishing.  The temperatures since about July 10 – a handful of days accepted – have simply been too warm for decent salmon fishing.  Thankfully it has not yet been too hot for salmon survival.  Jason Curtis, who has one of the river’s best vantage points, has seen only 4 or 5 dead fish – there are always a few on even the coolest summers.  I just came back from a few days of morning fishing and working on the camps, and I saw zero dead fish in my time there.  What I did see was a few very much alive fish moving up the river very late in the day each day, but the water was in the mid 70s and they were just on their way to the next cold water pool.  In the mornings the water was back down into the mid 60s, but there were very few fish showing, and the ones that did show were on the move.

There have been some sporadic catches from some of the cold water pools, but in general it is slow fishing.  Country Haven did tell me that one of their better pools down in the Rapids that used to belong to Ted Williams – no not White Birches – had produced well for them over the last week, so there are exceptions.

The Miramichi Salmon Association had some recent numbers from a couple of the barrier traps, and the numbers of salmon continue to be more or less equal to last year, but the grilse are lagging.  Jason and I were talking about a year or two in memory when we had low warm water in July, but then August brought us some decent rain and cooler temperatures.  One of those years was 2008.  My old friend and guide Willy Bacso sent me an e-mail then saying to get up to Blackville because the fish were “coming down the South Cains River Road.”  Naively I asked him what he meant….?  “It means there are so many fish in the river that no more will fit, so they are coming up the road! “   That August of 2008 still measures as one of the most productive months in my relatively short 15 years on the river.  Conditions, conditions, conditions…

Still the low grilse numbers so far are worrisome.  That on top of the low returns in many Newfoundland Rivers is pause for concern about the possibility of yet lower sea-winter survival this past year.  There is still time, so let us hope it all turns around.

The double whammy with the temps has been the total lack of rain.  One morning I was looking at one of the Chestnut canoes anchored just off the shore at Campbell’s in a foot and a half of water.  It remind me of the advertisements for the Gaspe’s Bonaventure with the canoe and anglers seemingly suspended in air.  This just isn’t the way things look normally on the Miramichi.

In addition to water clarity is the amount of it or “water level.”  The river today is at .540 meters on the Blackville gauge.  That is low, not record low, it can drop 4 inches or so from there under the most exceptional of conditions, but it is still very low, especially for July.  The additional problem this presents is that the wide, relatively slow moving lower Miramichi heats up very quickly if beaten upon by the summer sun. 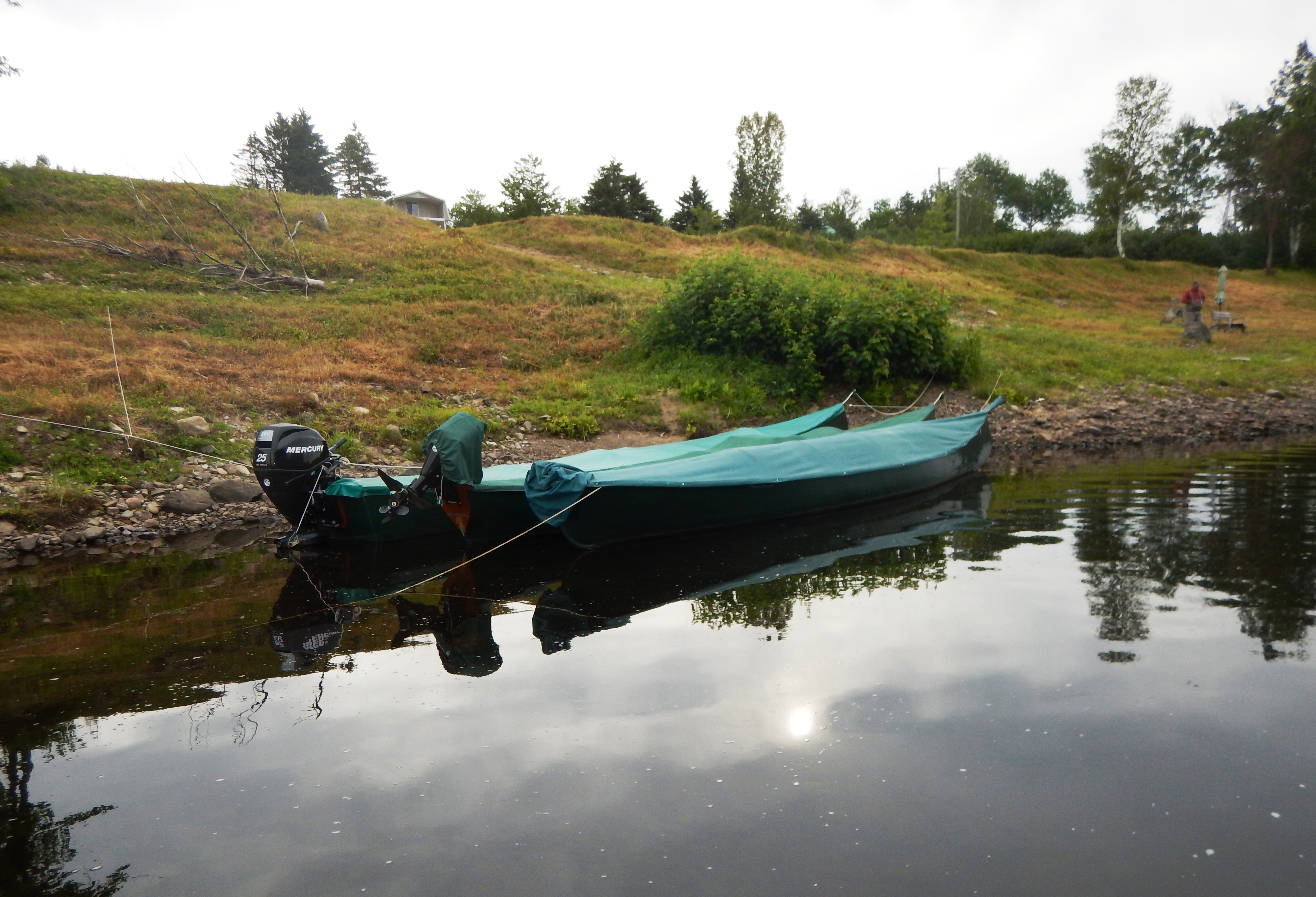 The fleet is in port waiting for a raise of water.

I try to remember that we are ground zero for most storms coming from anywhere across the United States.   And that is what we need now – water!  Unfortunately a big rain can not only bring in a lot of fish, but those fish may represent a big part of the year’s run, and send them through all at once.  It happened in 2014 with Hurricane Arthur to the point that it blew out the Millerton trap.  No salmon or grilse were recorded for almost two weeks.  To be conservative and consistent the government only records those fish actually caught in the trap, so the official number was zero for the period.  I was there, though, and it was by far the best fishing of the year.   A half an inch or so every week would be far preferable to a deluge, but we get what we get.  At this point we’ll just have to wait and see, but eventually we will get some rain. 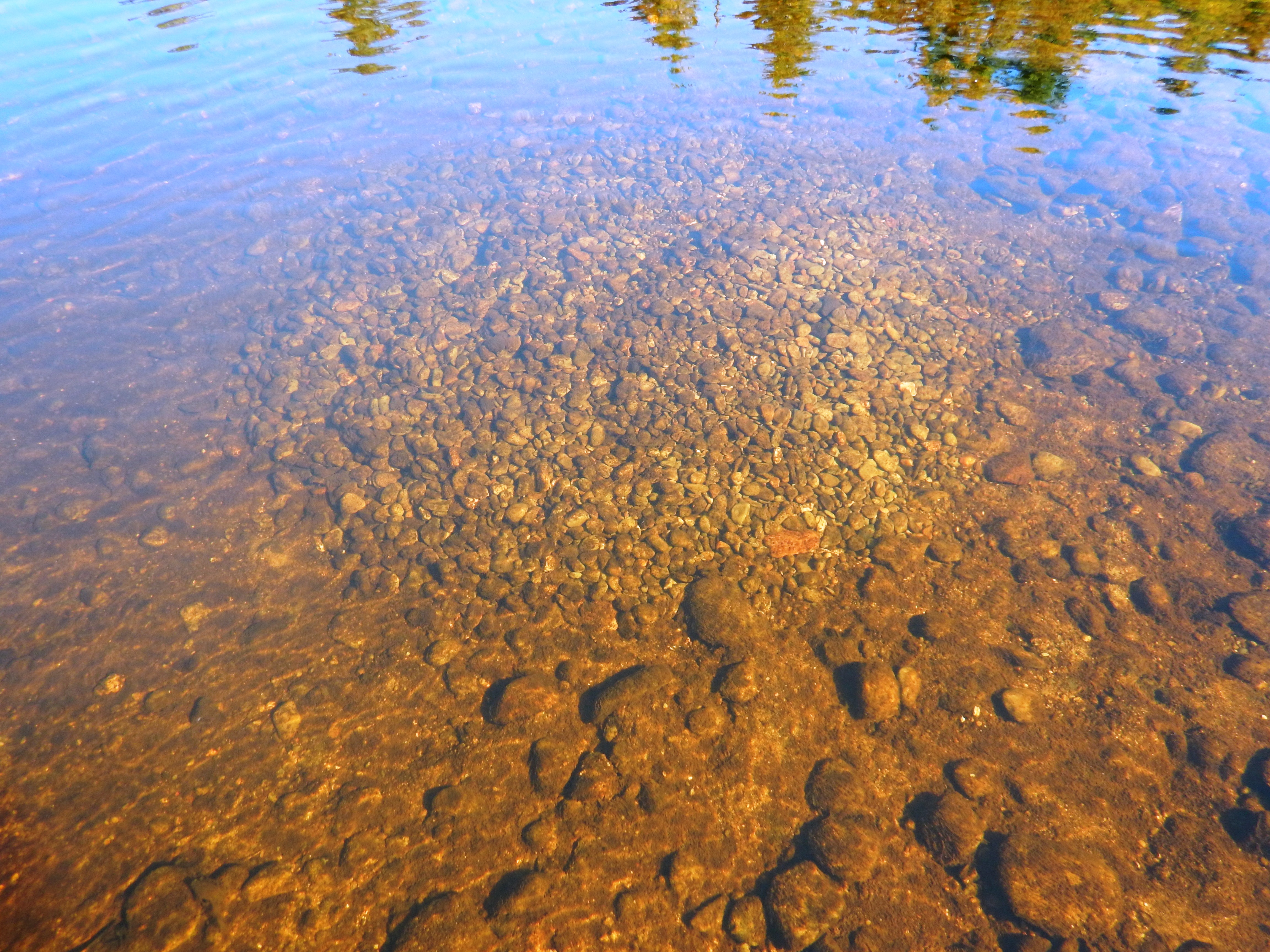 Yes, this is a redd, but according to the MSA’s Mark Hambrook it is a lamprey redd made back in June.

An old saying which I have modified for my purposes “that man doesn’t live by salmon alone” is none the less true.  My latest trip was 10% to fish a bit in the morning each day, and to keep watch over the river – and a nesting  box full of bluebirds – during cocktails in the evening…  Since I saw fish most evenings I also did a little evening fishing too, but I had no success.  The other 90% was working on the upriver Cains camp and sniffing the breeze.

A salmon camp located back in the woods some 40 miles above the tide is a shrine.   But salmon-wise on the upper Cains it is essentially an empty shrine until the last two or three weeks of the season.  The rest of the time, though, it has potential.  We do have brook trout and an occasional kelt in the spring, and this time of the year we have the chance for a good look at the physical structure of the river bed, can observe all the various flora and fauna, and that includes watching parr and eating the wild rasberries that grow all over the river bank beside camp.

This last week I helped Jason and Darrell scrape and paint the log camp, perform other needed maintenance, and also waded the river looking at the winter’s modifications to the gravel bars, and noted the presence of parr in the various shallow runs.  I’m happy to report, as I’m also seeing in the Main Southwest Miramichi, that parr in various sizes are seemingly quite abundant.  Watching them flit back and forth in the perpetual current, occasionally making a deliberate move for some microscopic tidbit, is always an uplifting experience.

The warm water closure of most of the “cold water pools” on the river has been lifted, but I wouldn’t want to rule out a closure beginning again mid-week with the forecast warm temps and continued rainless conditions.

12 Comments on “Waiting On Water”