The August 15 Millerton and Cassillis trap numbers for the SW and NW branches of the Miramichi were recently posted, so I’ve written up a little discussion regarding them.   Let’s go right to the information that I think most people will find the most interesting.  Inserted below is a graphic showing the Millerton trap counts, first for salmon, and then for grilse.  The bar graphs from the DFO website show the comparative number of fish caught in the trap through August 15th and then the end of the season, October 15, going back approximately 15 years.  Comparing this year to years earlier in the 2000s is important because at that time it appeared that the Miramichi salmon population was doing very well, and all seemed quite rosy.  I also like this graph because it shows you over quite a number of years a comparison between how many fish had been recaptured through August 15, and how many ended up in run for the entire season.  The green column is through August 15, and the tan one is for October 15.  In 2020 there was no count. 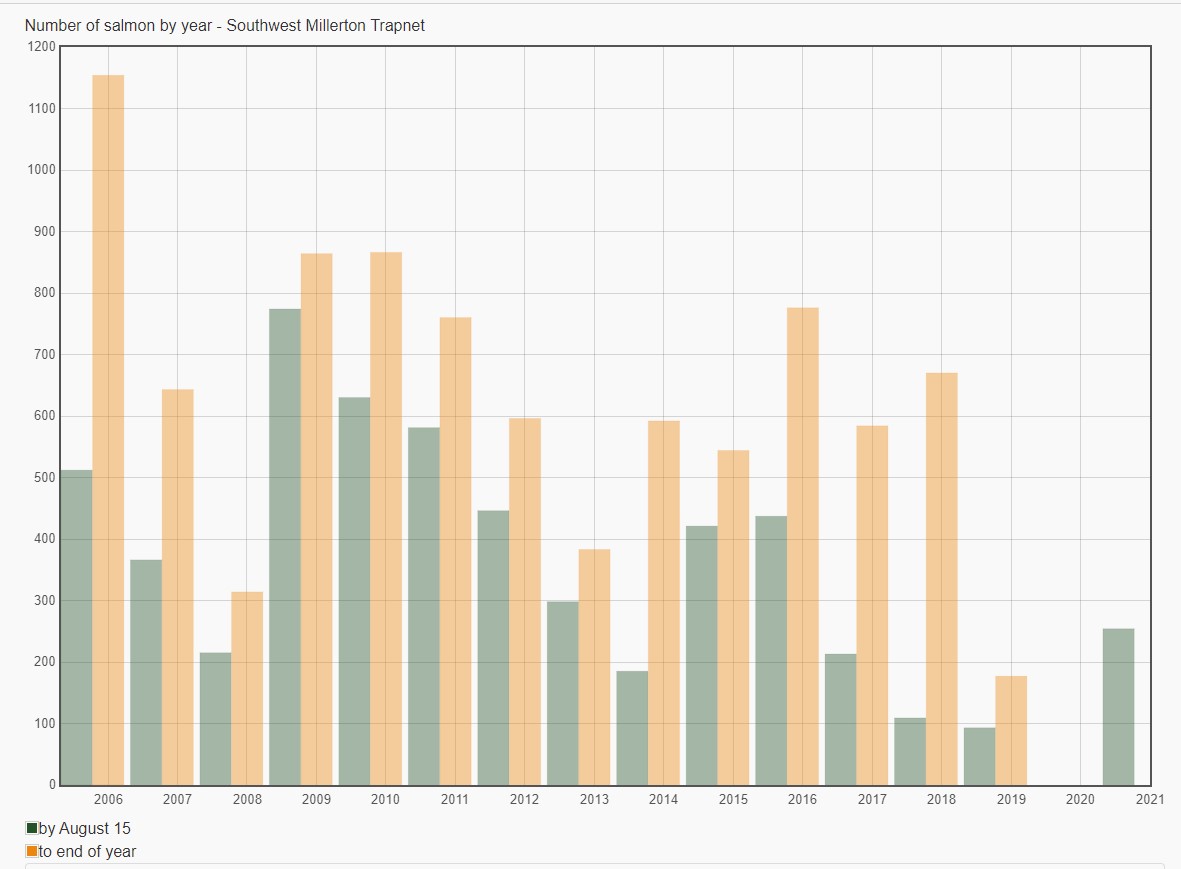 At the far right in the graphic above we look at the green column for the number of salmon from the SW Miramichi through August 15, 2021.  That number is 254.  The exact number comes from the recently published Cumulative Counts DFO website.  This is much better than the 91 and 83 counts from 2019 and 2018, but it is roughly 65% of the 393 that the river averaged from 1998 through 2017.  From all of anecdotal information we have 2020 was probably similar. 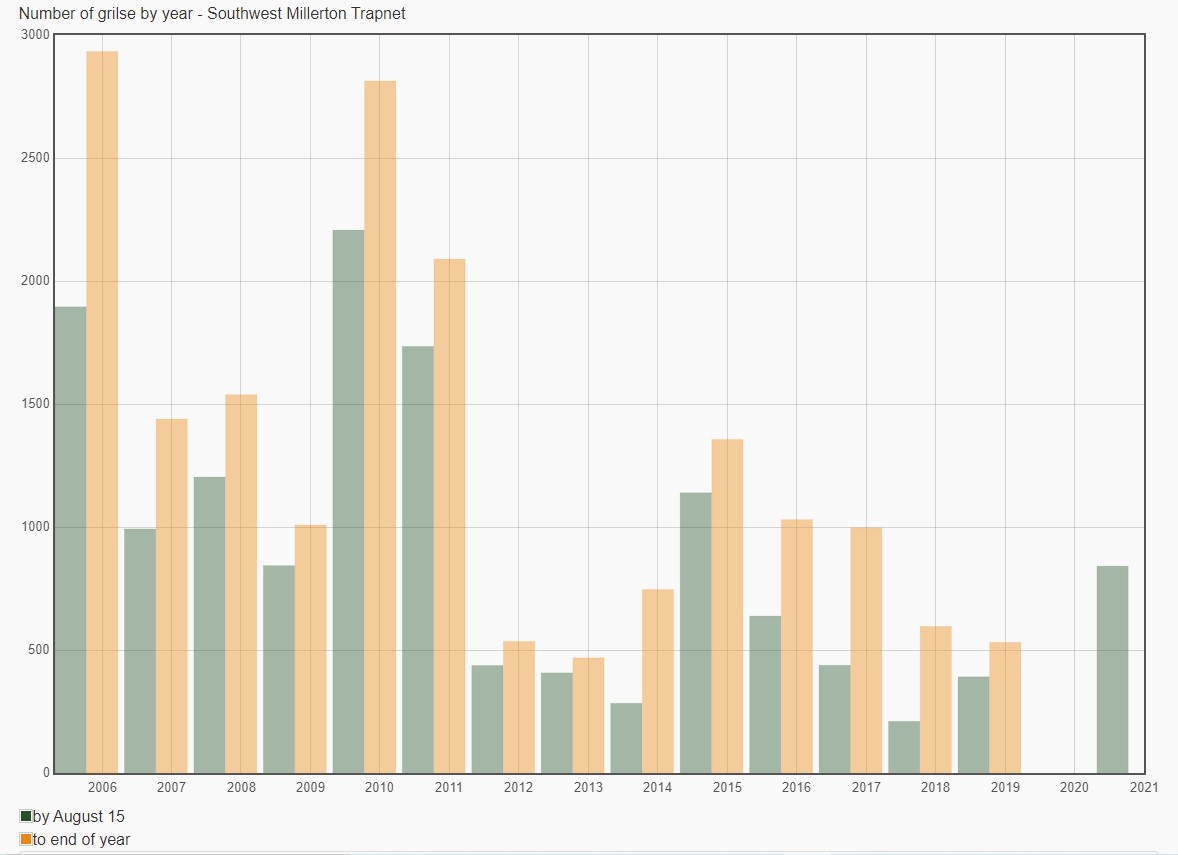 What you could say about both catch statistics is that the numbers through August 15 are much better than in other recent years, but are still well below the levels of the early 2000s.  I don’t think that anyone can definitively say why we have had this decline that seemed to have begun after 2011, nor why there has been an apparent recent improvement both in salmon and in grilse – though we are very happy to see it.

If we look at the graphics we can also see that the amount by which the catch of salmon increases between August 15 and October 15 varies greatly year to year.  In years like 2009 through 2011 anywhere from 75% to as much as 90% of the run was in the river by August 15.  In years like 2006, 2017, and 2018 as little as 15% of the final run was in by August 15.  This means that since the numbers are fair to good through August 15, that it is still very possible for 2021 to end the year with an exceptional salmon run by modern standards.

When it comes to grilse, it appears that the numbers through August 15 on the SW are consistently a higher percentage of the total grilse run for the season than they are for salmon – a higher percentage of the grilse run usually comes during the summer.  There are some notable exceptions to that, though, and 2017 and 2018 were just such years.  The bottom line is, that as with salmon, 2021 could end up as a banner year for grilse.  While we don’t know that yet, it does appear that at least a very solid year for grilse is highly likely on the SW. 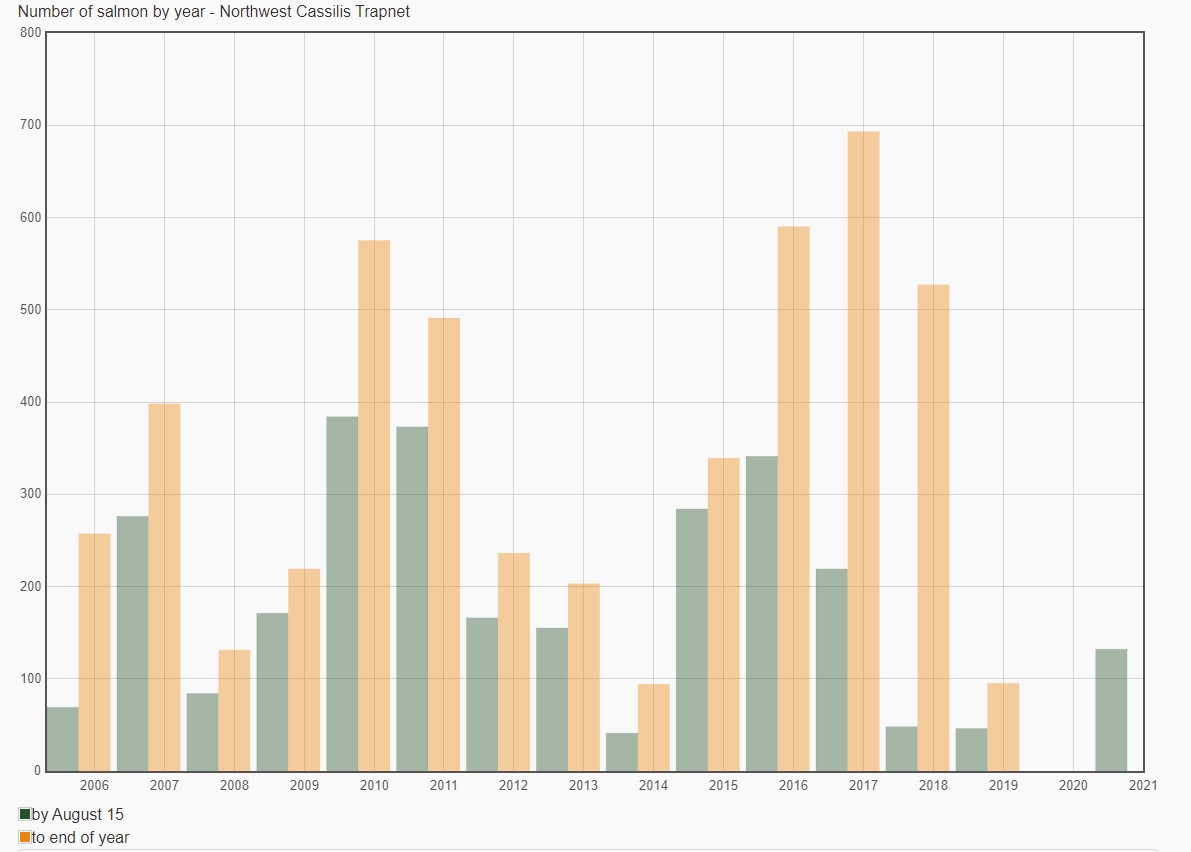 Like the SW, the NW run of salmon through August 15 is much better than in other recent years, and very similarly to the SW it is 68% of the 1998 through 2017 total. 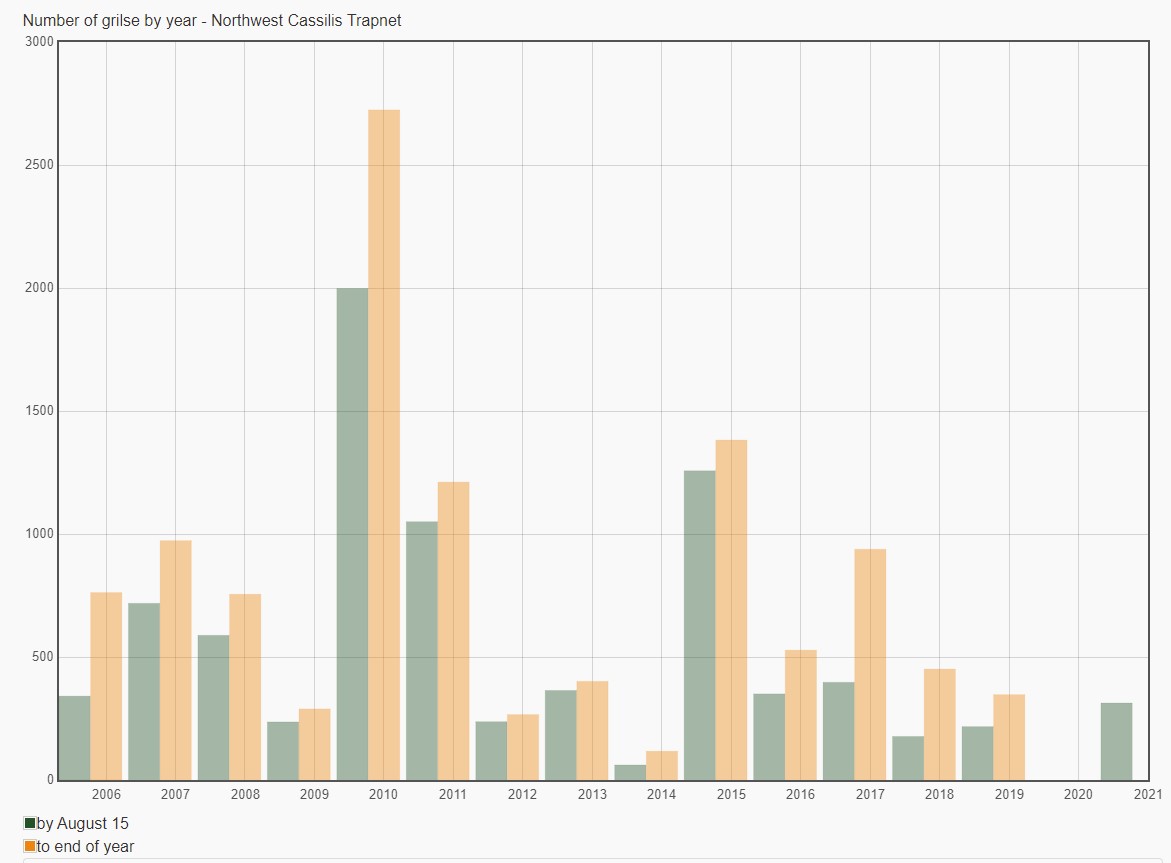 Grilse on the NW, though, were only 47% as numerous in the trap as the 1998 through 2017 average – compared to 76% on the SW.  Why the grilse are doing so comparatively poorly could possibly be due to excessive striped bass predation on smolts.

In annual perspective the percentage of the runs of both salmon and grilse coming in during the period from August 15 to October 15 was much larger on both branches in recent years than during the last 20 years in general .  As with the SW, if this trend towards a larger percentage of fish arriving in the fall run continues for 2021 then the final numbers could bring the yearly totals on the NW up to a very high percentage of the totals of the better years of the early 2000s.

It was very near freezing Friday night in many places around New Brunswick, and doubtless some particularly cool areas had frost.  The heat wave is broken, and air and water temperatures are quickly back to normal levels.  We also have several good chances to see rain this week.  Hopefully we all soon be back into some good fishing.