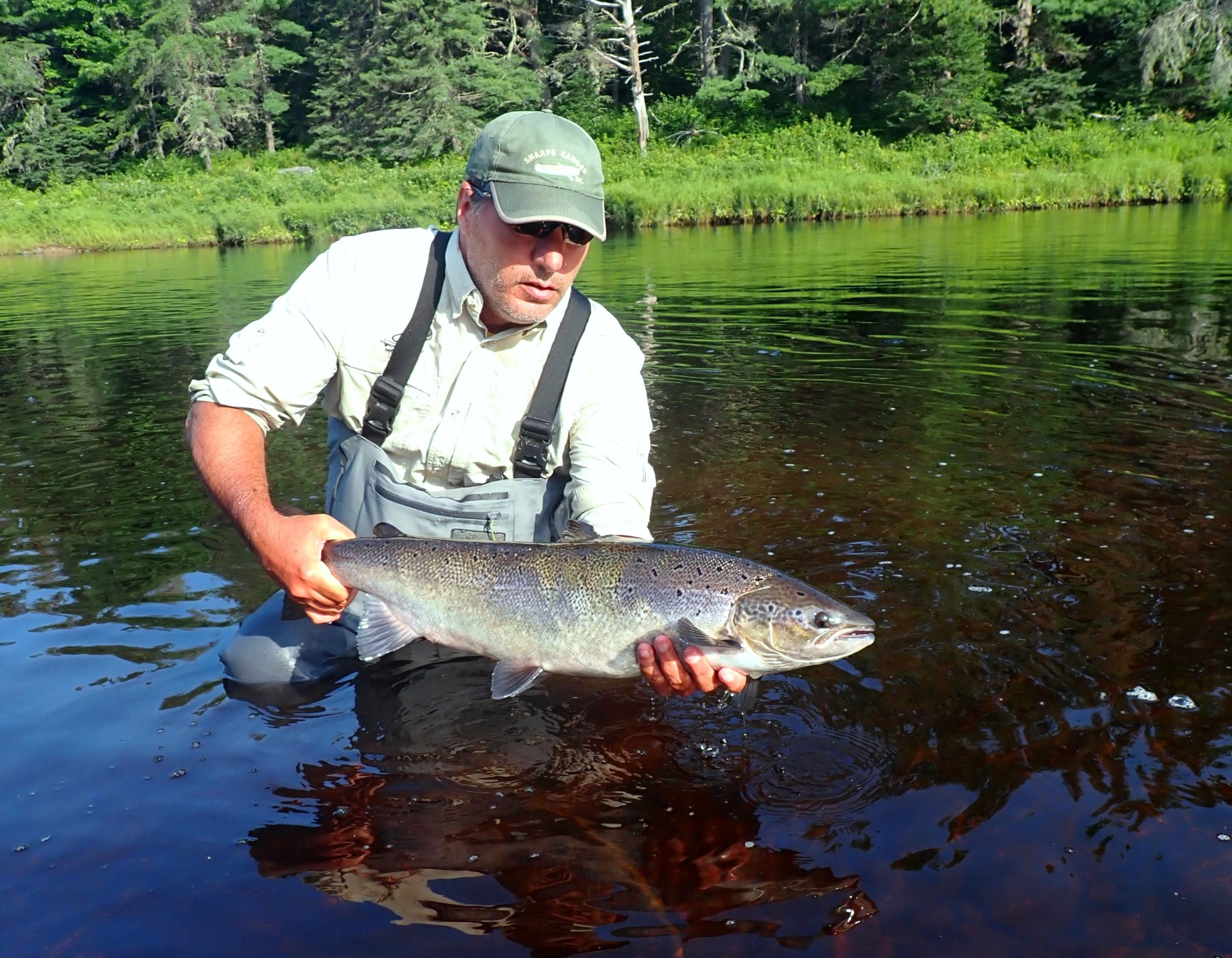 This year’s weather has been the most upside down of any for many years.  We started out June with two bonafide heat waves.  It didn’t rain either, and it looked like we were in for another low, hot year like 2020.  July, though, was one of the coldest in the last century – truly – and we had lots of rain, especially over the Cains River valley.  The NW Miramichi did not fare as well, and has had chronically low water all season.  Now in late August we find ourselves with little rain and constantly warm weather.  The weather is warm enough that DFO has closed the entire Miramichi system to any fishing until further notice – so no fishing reports.  That should all be coming to an end on Thursday of this week.  Friday, Saturday and Sunday are all forecast to be substantially below normal in terms of both high and low daily temperatures.  DFO wardens told a friend of mine that they expect they will be able to lift the ban this weekend.

Unfortunately, as it always does, the hot weather and concentration of salmon in the cold water pools has brought out the poachers.  People have been observed trying to snag salmon at locations where brooks enter rivers, and to run nets through pools.  On August 20th guides from Country Haven were checking on the Brophy Pool when they discovered a gill net set in the broad, slower portion of the pool.  The upper portion nearer the brook is pretty well protected with several anti-netting devices designed to snag and entangle any nets that contact them.  The net contained two salmon and a grilse that appeared to have been dead for a couple of days.  It was unclear why the net was abandoned.  The word is that other lower Cains pools have been netted too.  The Cains has had a good early run this year, and there are several cold water buffered pools in the lower section that are fairly remote.  These make attractive targets for the poachers.  There is discussion about forming a volunteer patrol to keep an eye on these pools.  Let us hope that happens.

After months, actually years of work, planning and organizing the scheduled application of Rotenone to Miramichi Lake and a small nearby stretch of the Miramichi River to eradicate the smallmouth bass present there, the plan was at least temporarily blocked by a group of First Nations women from the Wolastoqey band.   The group called the “Mothers and Grandmothers” canoed out onto the lake and refused to leave.  By contrast the Mi’gmaq band from further east have been prime sponsers of the smallmouth eradication project.  Apparently this group of Wolastoqey felt that they hadn’t been consulted enough, and that other terms necessary for their support hadn’t been met.  This is in spite of a signed agreement from the tribe from last spring.  Everyone is now trying to satisfy these concerns so that the project can be moved forward soon.

I’ve been holding off writing this update to get the August 15th trap counts from the DFO, but for whatever reason they haven’t posted them yet, and there were some other issues that I felt needed to be addressed before they became ancient history.  I did get the Dungarvon and NW Miramichi numbers through August 15th, though, and those numbers showed a few new fish entering.  This is the lull that always occurs at this time of the year.  The run for 2021 at the Dungarvon barrier shows 196 salmon and grilse, and that is up 26% from last year.  On the Northwest we are up from 209 last year to 248 this year for an increase ytd of 19%.  It is great that this year and last are up over previous years, but it is sobering indeed to look back at season totals from 30 years ago and see how far these numbers have fallen.  At least for the moment we seem to be headed in the right direction. 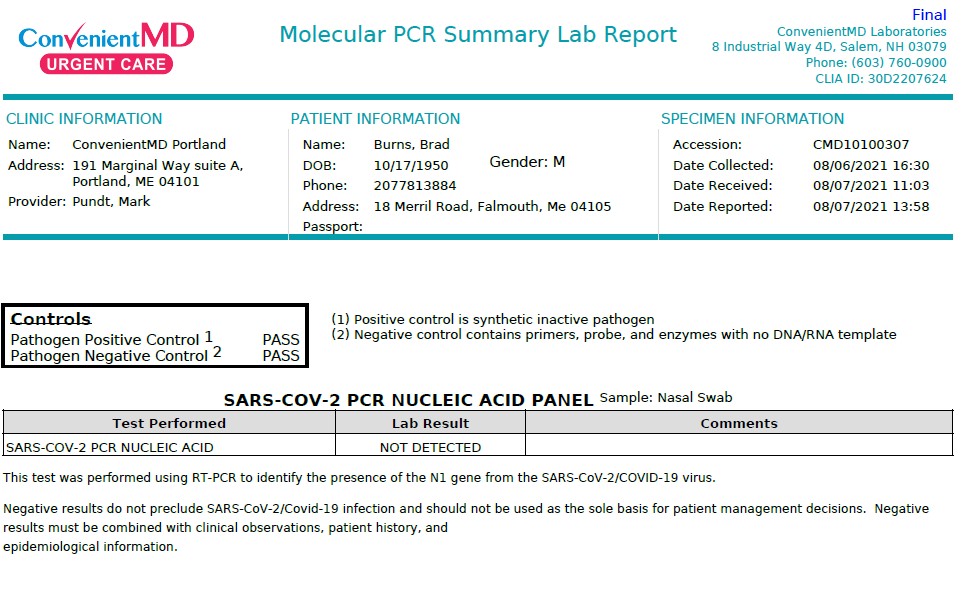 The passing Covid test that got me across the border.

Last, a few words on crossing the border.  I arrived at the border two hours early went across number eight in line on Sunday night August 8th.  I had loaded the ArrivCan app, got my Covid test results so that they would be less than 36 hours old when I crossed the border, brought my vaccination card with me, and I got through just fine.  It was taking about 10 minutes per vehicle at the time, but I would hope it is down considerably from that now, as the kinks are worked out.  I only stayed a couple of days, dropping off a bunch of special supplies for the camp and getting in a couple of sessions of fishing.  The first fishing was the afternoon of the day I arrived.  I did see a few fish jumping as they moved up the river, but the temperature was 73F, and I failed to get a strike.  It cooled off overnight and I went to the Cains where I got the 18-pound hen in the top picture, lost another nice fish, and rolled a touched several others, all on bombers.  As I like to do I had my breakfast on the porch the next morning before leaving, and like old times I watched a number of fish jump as they made their way up through the pool.  It was great to see that again. 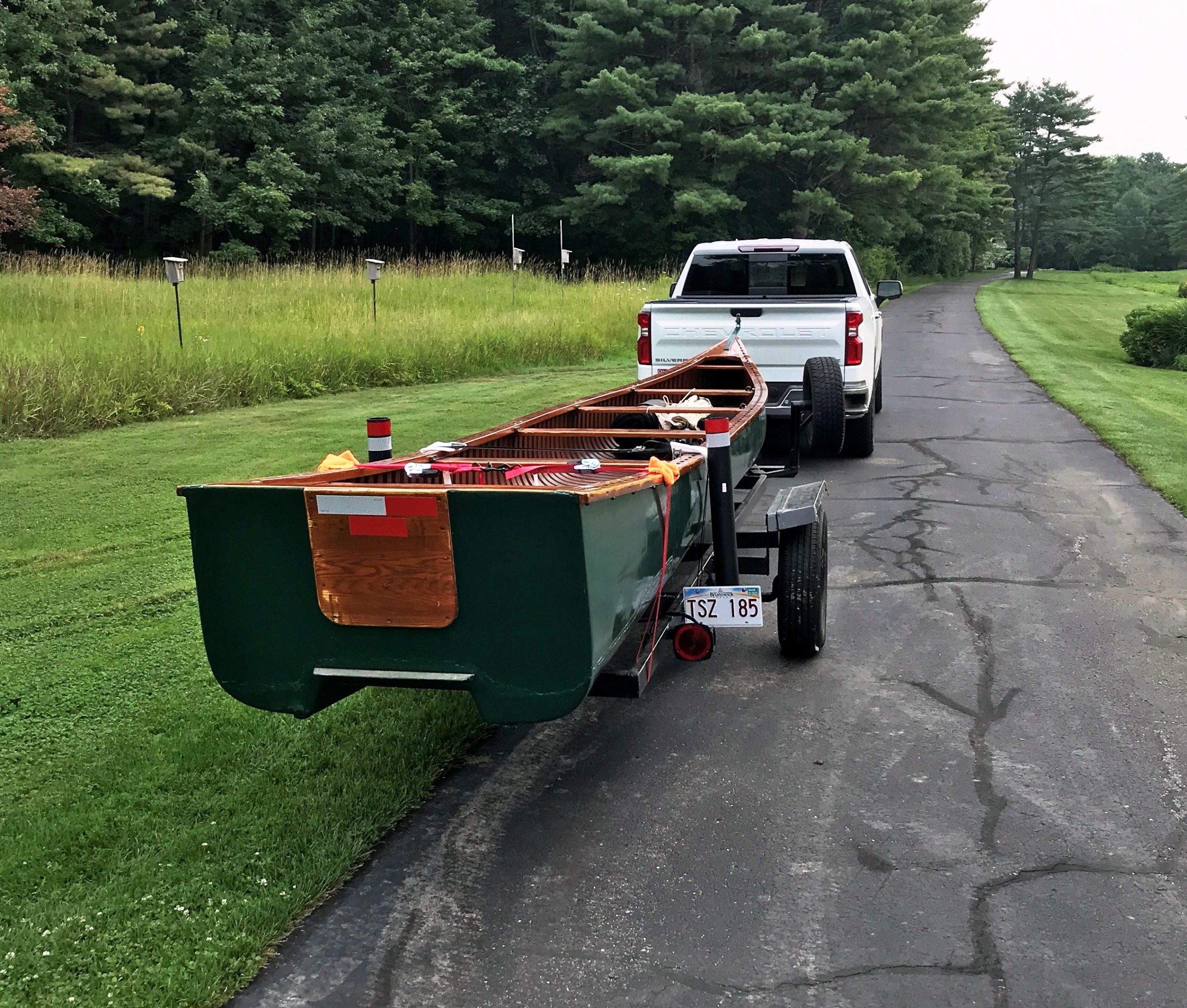 Headed back to Canada after a 22 month absence.

On the way home I specifically asked the officers – as people had requested of me – if there were any plans for random Covid tests at the border.  I was told very clearly that at that time there were no Covid requirements at all at the border for American citizens.  All American citizens are welcome to enter at any time, and neither a Covid test nor proof of vaccination are required.  Things can change, but I haven’t heard anything about it yet.

I do know that the lodges are filling up fast.  Upper Oxbow, Country Haven, White Birch, The Ledges, Bullocks, Wilsons, and probably some others I have missed may still have available spots.  This year’s run has been excellent, and statistically, in most years, the fall more or less mirrors the rest of the season.  Now is the time to make your plans for getting on the Miramichi this fall.

PS  MSA staffer Butch Dalton with a little help from me has been working away on FishPal Miramichi.  The site is not finished, but it is getting there, and we hope to have it available for people to use as a source of information before the month is over. 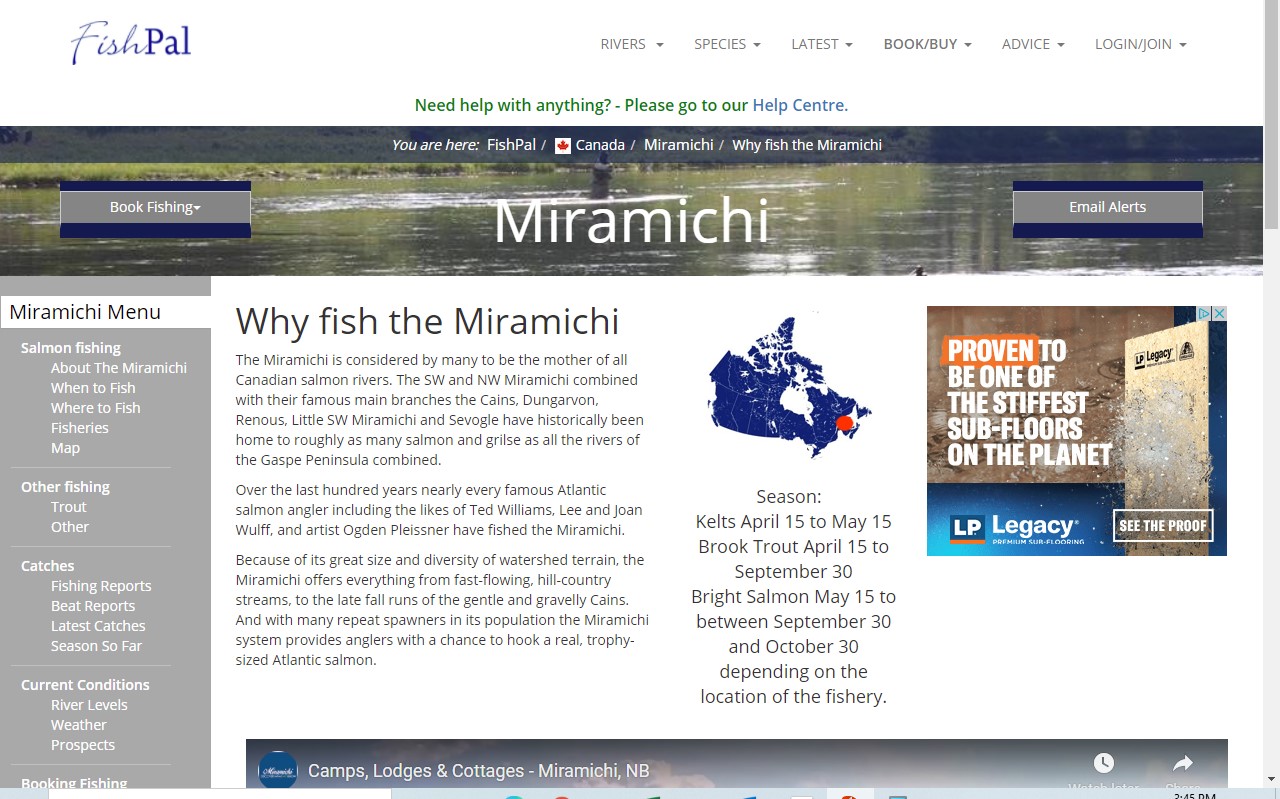 A partial snapshot of the FishPal Miramichi page in process.