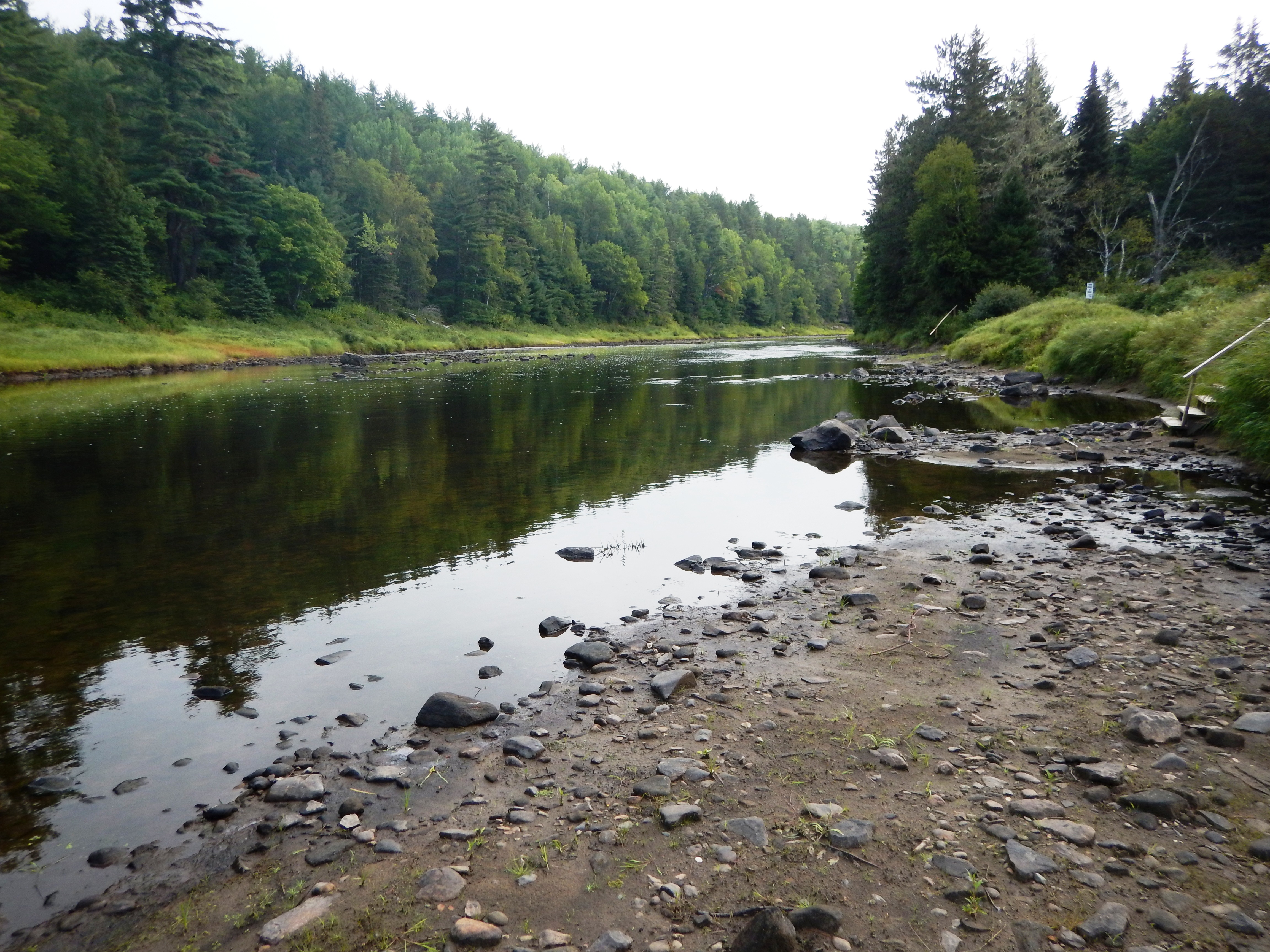 The Cains is as low as we’ve ever seen it.

I’ve always love the last days of summer on the Miramichi, and even though it is normally the low point of the season’s fishing, I have a hard time staying away.  During the last couple of weeks there were a few heavy downpours from thunderstorms; one day the headwaters of the Cains got 10mm or about 4/10ths of an inch rain.  Unfortunately none of these storms were prolonged or wide spread enough to bring about a meaningful raise of water.  If you are fishing up in the headwaters, or in one of the systems cold water holding pools, an occasional fish can be caught, but other than that you have to have the world’s best luck to have recently taken a salmon on the Miramichi.  Knowing all this in advance I went up last Thursday anyway, as much just to be there one more time this summer as for any other reason.  But it went a little better than I hoped. 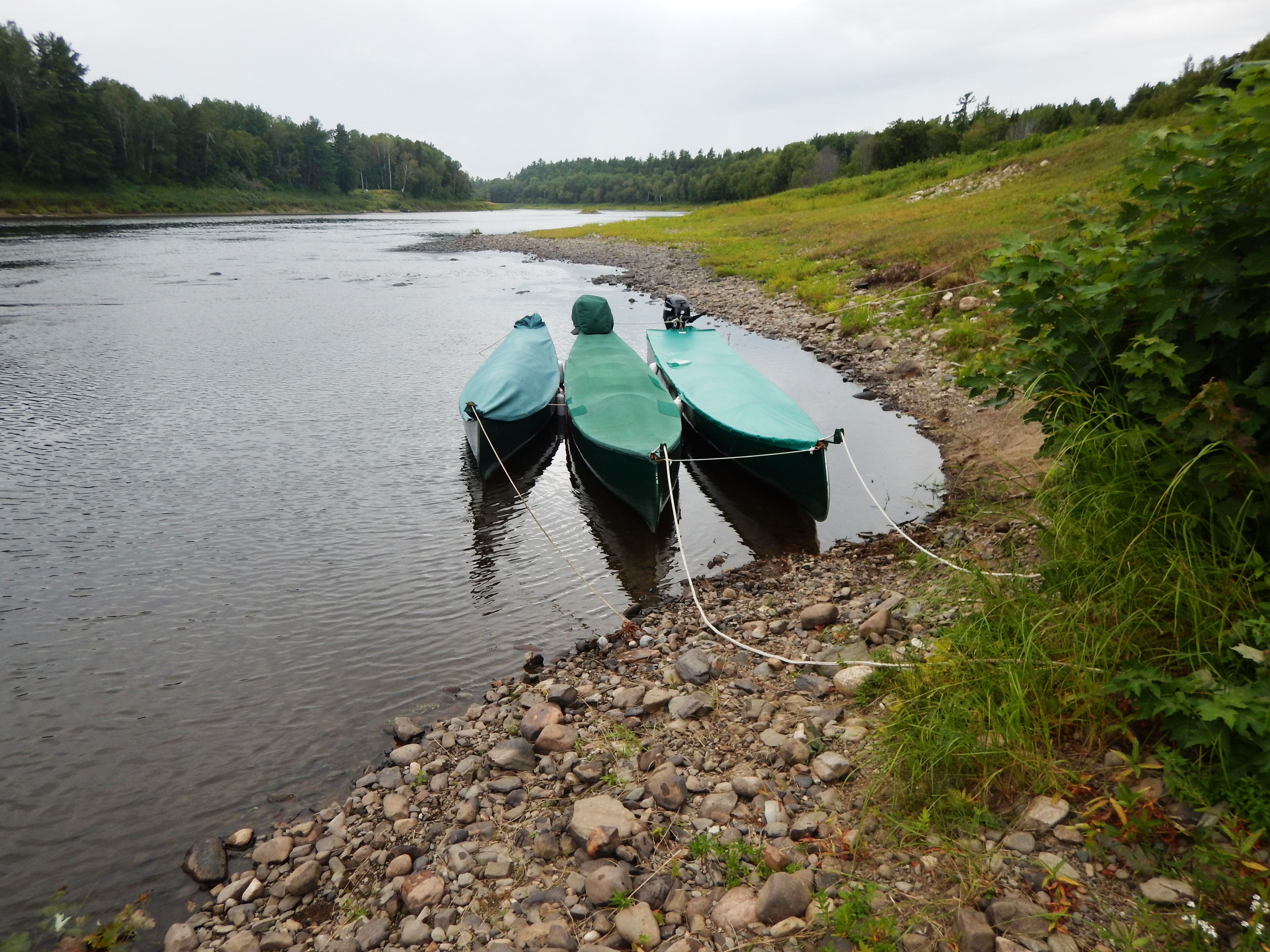 That’s my 22 Chestnut back under wraps beside a pair of 26′ Sharpes. You have to have to lift hard on them to get them over the bar just outside this tiny anchorage.

One thing that is normal in Atlantic salmon fishing is for things to end up differently than anticipated. I’ve got weather sites, river gauges, reports of all sorts, local contacts, but still I usually end with a surprise.  On my first evening in camp I fished down the Keenan side of the river – Papa’s Rock for any Wade’s old timers – without a touch, and sat on the bench with Darrell Warren until well after 7:00 PM hoping to see the roll of a salmon making its way upriver.  We never saw a thing.  The next morning we had the same experience on the Campbell side.  Just because I like doing it I poled my 22’ Chestnut Ogilvey canoe up along the shore to the top of the Jardine Pool, and drifted down over the three large bars that make up the fishing areas of that stretch.  Jason Curtis’s uncle Gary used to do some fall outfitting from his home overlooking the pool.  It was there, and all the way down through Campbell’s, that Jason could drift along in the old 20-foot Chestnut canoe that he grew up with and look at that the salmon laying in fall low water.  According to Jason’s recollection every piece of bottom big enough to hold a salmon had one on it.  This late August morning, though, there were none to be seen.  I drifted by the mouth of the neighborhood brook, and laying just outside the mouth on the edge of deeper water were a grilse and an especially large salmon.

I then continued my drift down through the center of Campbell’s and Keenan’s and ran across another large single salmon and a few yards below it a group of 4 mixed salmon and grilse. It’s hard to say if I saw all that were there, but frankly I hadn’t expected to see any fish since we saw none showing in the pool either earlier that morning or the night before. 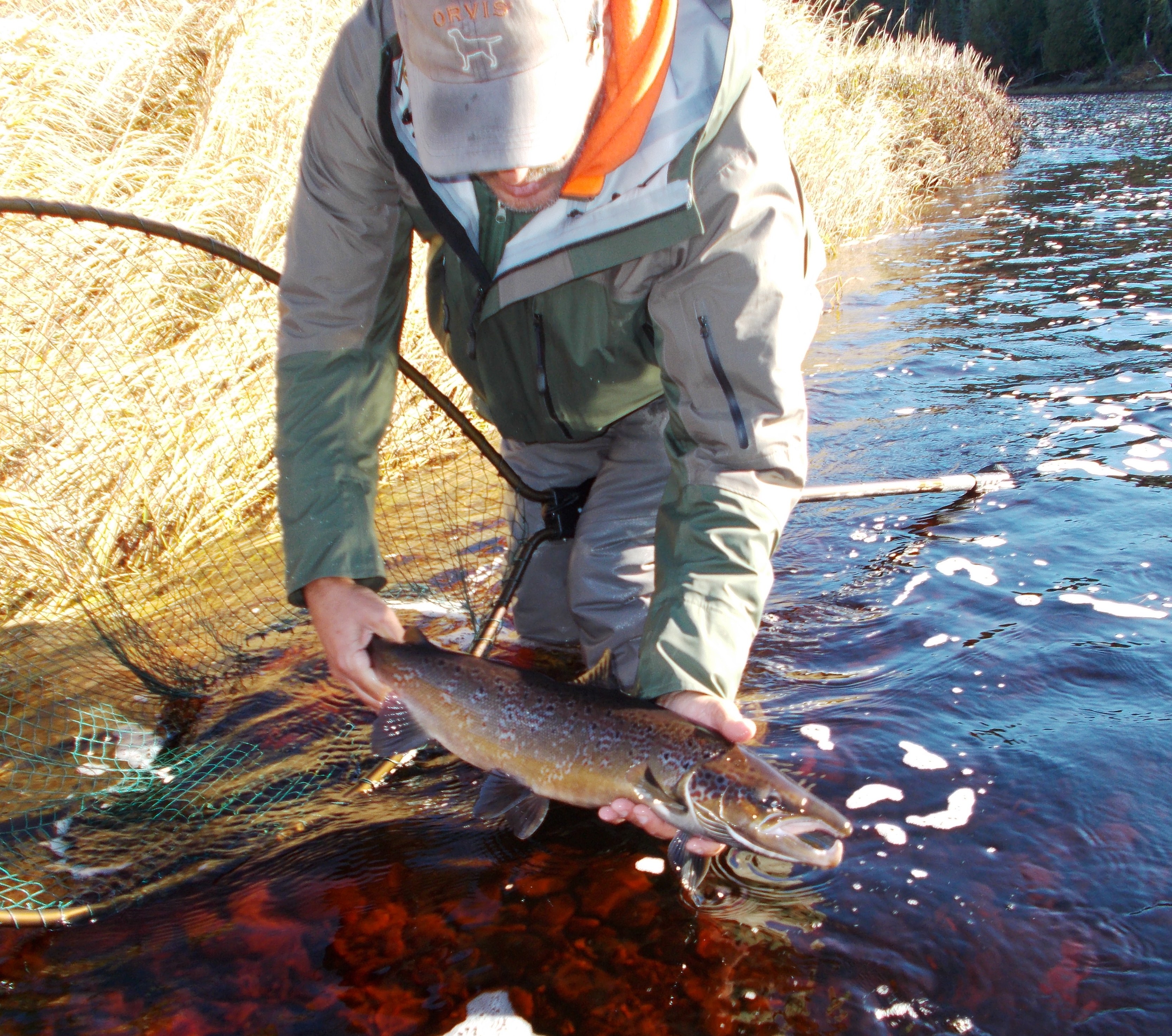 We forgot to take a picture of the recent grilse, but they were carbon copies of this one also from the Cains a few years back, though a bit less colored.

On Sunday morning we hit the Cains. The small, brook-fed holding pool that we fished did have a few salmon and grilse in it, but as we also expected the river was down to its bare bones.  The run where in normal fishing 90% of the fish are caught held nothing, and you could walk across it anywhere and probably not go above your knees.  Compared to its normal tannic-stained self, the Cains was as clear as the air in a crisp, November cold front, and this allowed an excellent view from the high bank along the river.  There were a few fish holding in the deeper parts of the pool.  A little fog that morning provided some stealth, and I stood well back from the water Spey-casting an ultra-sparse #12 shrimp fly at the end of a 20 foot leader that tapered down to 6 pound test.  A leader like that is untenable on a single-hand rod, but on my 14’, 8-weight Sage X-Spey I made effortless casts that landed beautifully straight.

I fooled two grilse that morning and rolled a couple more fish. I suspect they too were grilse, and that the larger salmon that were there were just too stale to take a fly.  During the morning I also made a hundred or two casts trying bombers of various sizes and colors to fish that we could see against the bottom, or that we had seen roll.  In no case did we cause any of these fish to move at all for the fly.  The fish’s great preference for the wet fly came as a surprise to me.

I’ve had great fishing in late August, but it requires a decent raise of water to encourage the fish to enter the river, and for the water temperature to get a little cooler.  On Sunday evening as we left the river the air felt cool, though I had put a fleece vest over my summer fishing shirt.  I reached down and put my fingers in the water – it was still a summery warm 68F.  The main river had a lot of green algae in the water.  It was on your line or fly on every cast.  This algae was a feature of the last few weeks as it wasn’t there earlier in the month.  Already, though, it is dying back and floating away.  This is the cusp, the change from summer to fall.  I see that this Friday’s forecast high is 13C/55F!  Now that is a cool day for September 1.  Actually there are good temperatures all week, and that should really help, but a substantial dose of rain is still the most important – and sadly lacking – ingredient. 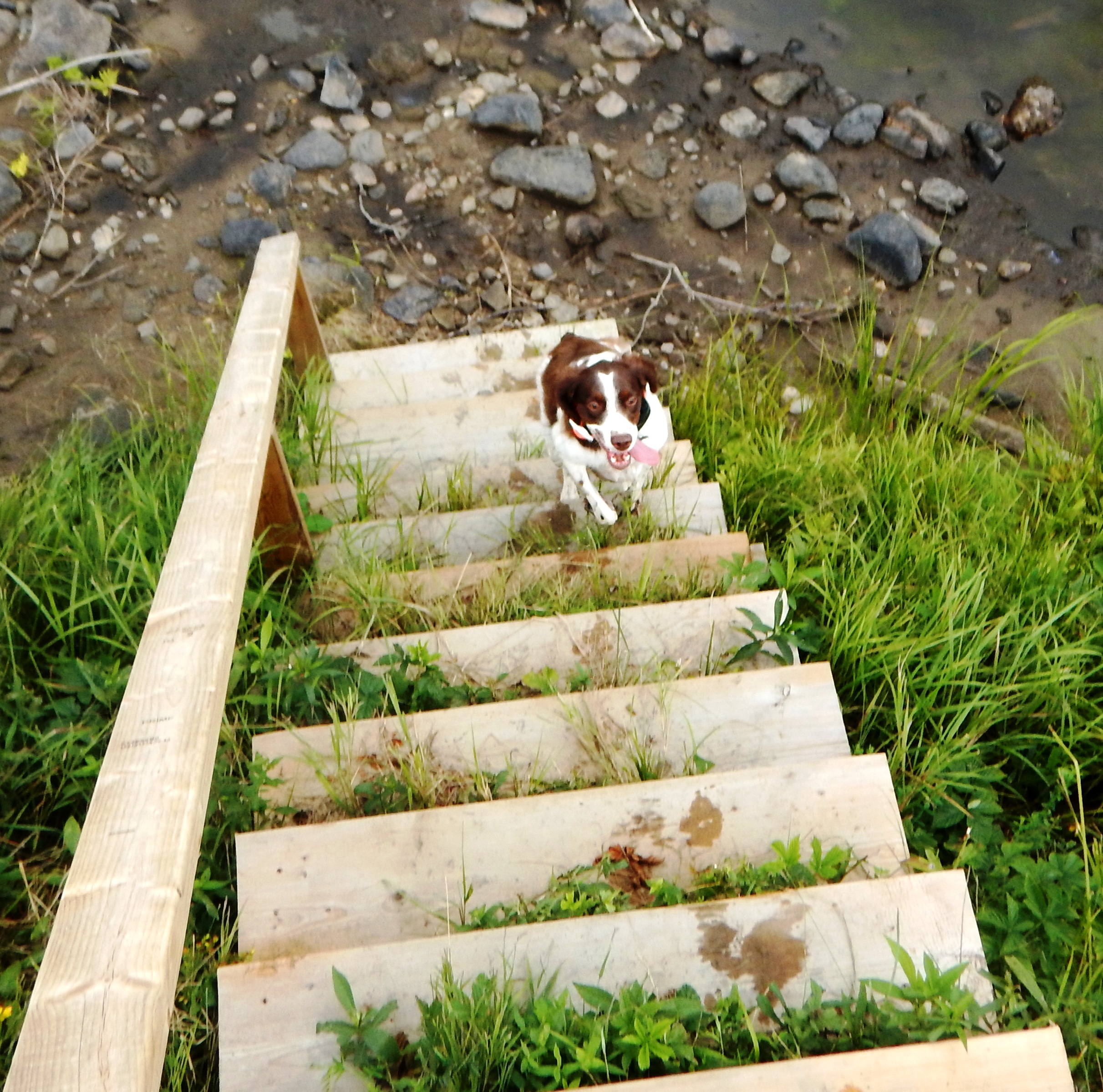 Savvy cooling off in the river after working a few birds.

The cooling temperatures certainly remind one of the coming change in the seasons. Guide Jason Curtis is a major league bird hunter and dog man.  I’m a real pilgrim at that sport, but we took Jason’s young Brittany Savvy out into a cover along the Cains River for some training.    In a short while the dog pointed, and we flushed, a decent number of woodcock and a couple of grouse.  It was great fun to see the dog work, and to watch the birds burst out of the cover.  They sure look difficult to hit to me.

This may be my last blog until after the end of the fishing season. It is too much aggravation to write all of this on a phone.  I’ll be taking lots of pictures, though, and when I get back right after 10/15 I’ll send a detailed recap of the fall season on the Miramichi and Cains Rivers.   I will try and keep the Miramichi Salmon Report page updated on my website. 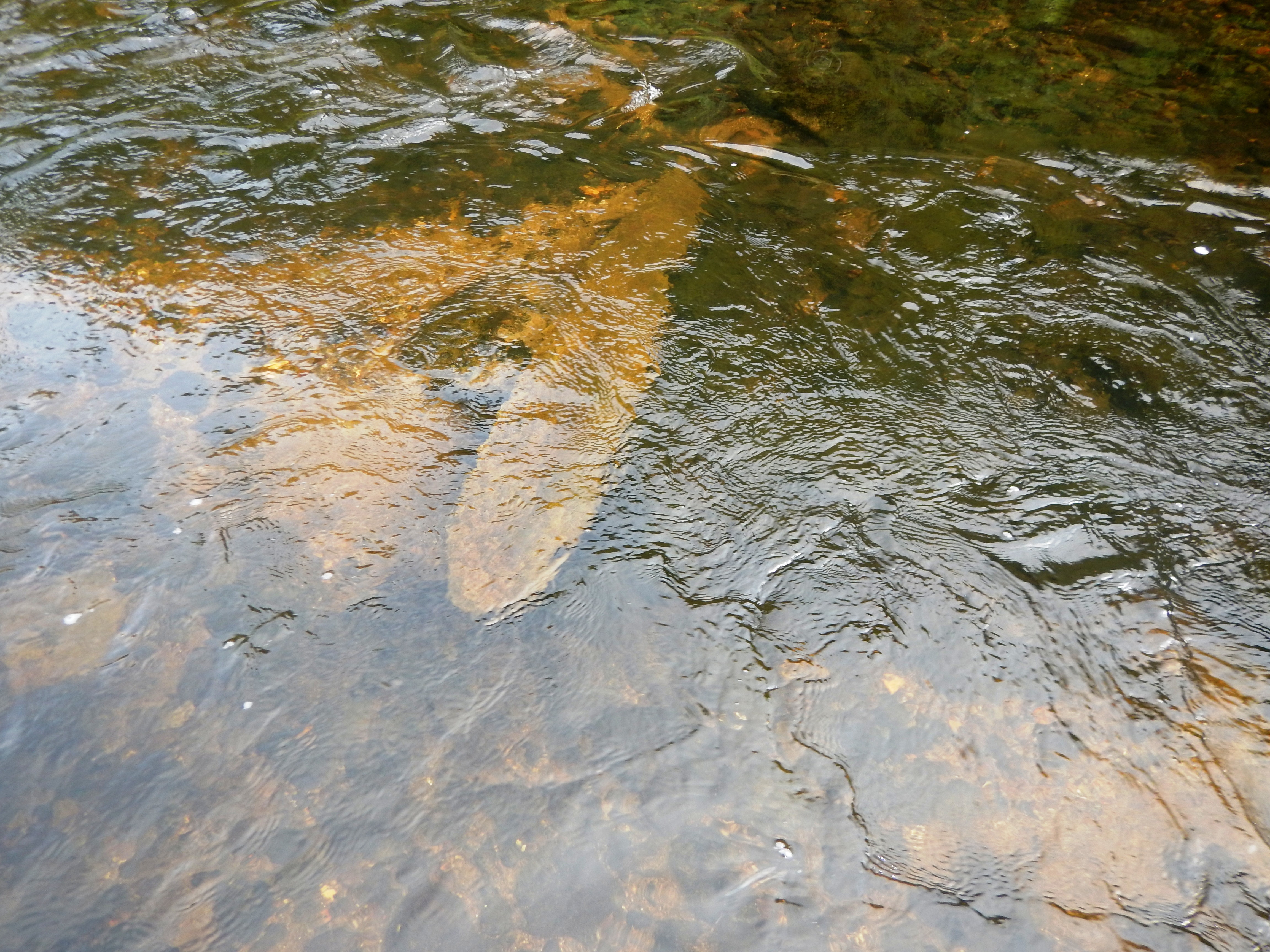 That oblong, golden shape is an old Sabbies River slab – first cut off the outside of a log – that the mill located there routinely discarded into the river until around the time of the second world war. They are still found here and there on the bottom of the Cains. You can see the sand deposited in the eddy in back of the plank. Like many, this one is has actually formed part of a nice salmon lie.