Click on the IMG link for a movie by Country Haven of ice moving in front of their lodge.    IMG_3287

There is definitely something stirring about watching the ice leave a major river like the Miramichi, and in knowing that it signals the beginning of another season of Atlantic salmon fishing. 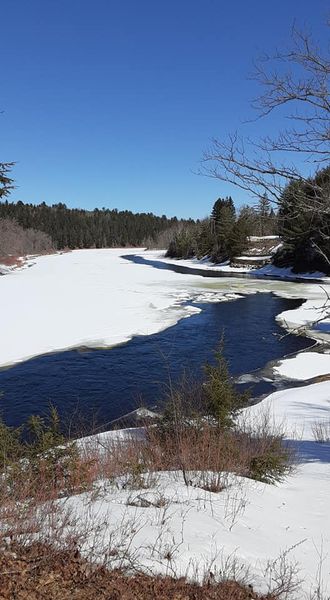 One of the things that makes the Miramichi ice out interesting is the unpredictability of its timing.  I have seen recent years when the ice was not completely out of the river by opening day on April 15, and other years – like 2021 – when it was gone by the end of March.

In the last couple of years the trend has been to somewhat earlier ice outs.  In 2021 it was still March when the ice left.  It is April 2 as I write this, and there are large open areas in some places, but the ice is still holding in some others.   There was about three quarters of an inch of rain over a lot of the Miramichi yesterday, and that will help.   In most years it is raising water that takes out the ice.  The ice shield is shaped just like the river, and it is locked in place by the banks.  When the river rises it also widens, and then the ice can slide downstream.  If the rain is substantial, and the weather changes quickly from cold to warm, the ice can move even though it is still thick and healthy.  This is scenario that plows up the shoreline, moves boulders, and fills in pools with gravel.  Thankfully 2022 is not one of those years.  Click on any photo to enlarge. 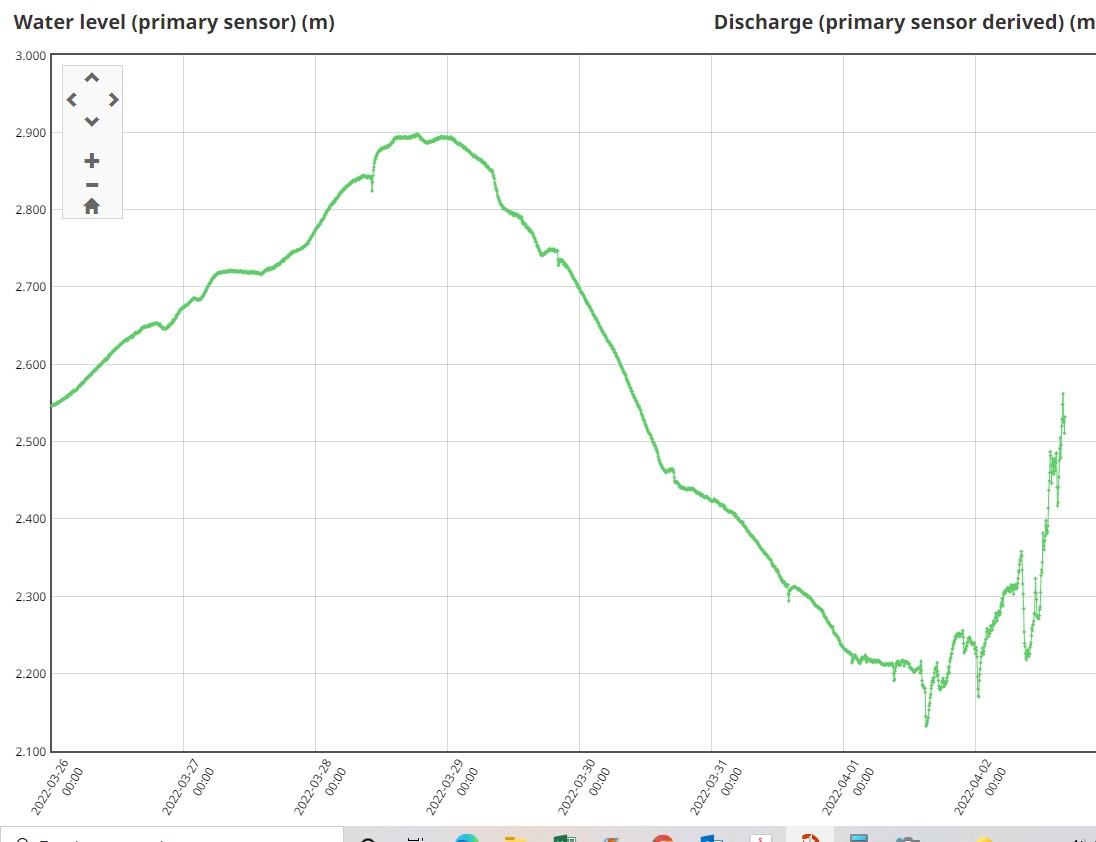 All the ice changes reported on in this blog make sense when you look at this graph. The raise in water a week ago created the first chinks in the armor. The water is again raising now, and the ice is breaking up causing the fluctuations in the graph.

Darrell Warren took this photo in Doaktown on 3/27.

This early spring the weather has been seasonally gentle.  A lot of the snow in the woods has already gone, and much of the the river ice has melted away in place.   We did get about ¾ of an inch of rain yesterday over much of the Miramichi, and today the river is rising.  If you look at the graph of water height on the Blackville gauge you’ll see that in the last 24 hours the water has risen about 18 inches.  I can see in the Bullock’s Lodge webcam that current speed has picked up substantially.  If you look at the graph from the Blackville gauge you can see the nervous up and down fluctuations that always seem to accompany ice out.  I assume that this is due to water rising and falling as ice dams form and cause a rapid raise of water, and finally get swept clear allowing a quick drop in water height. 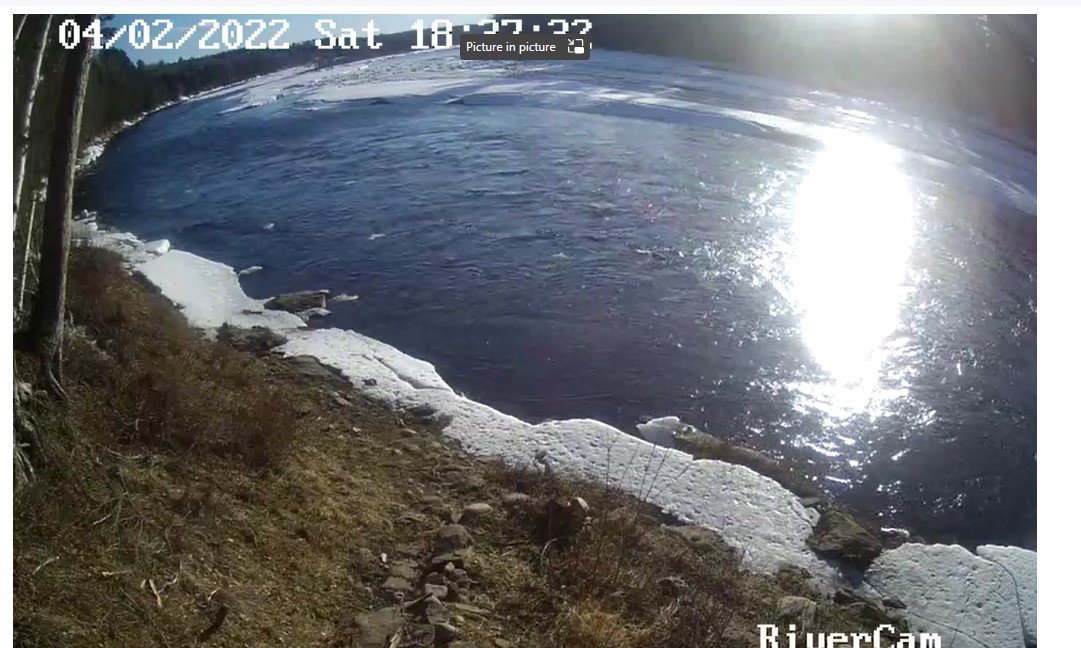 The MSA webcam in Boiestown. You can see the jumbled ice at the top center of the photo. The river here is about to break through the remaining ice holding on the far side and clear the pool.

Parts of the Cains River in Shinnickburn cleared last weekend

Another interesting phenomena of the Miramichi system is that the ice tends to leave the Cains a little earlier than the Miramichi.  Marc Poirier sent me photos from his camp in Shinnickburn last weekend.  When he arrived on Saturday the ice was all firm.  On Sunday he could hear the ice moving, and the section in front of his camp down to Schoolhouse Pool was open water.  Darrell Warren was out for a ride up to Doaktown at this same time, and while there was an occasional open lead the SW Miramichi was still pretty much iced in.

Earlier in the week I got some photos from Eddie Colford at Black Brook, and they showed that the mouth of Cains and area right in front of Black Brook itself was clear.  You could still see the ice holding upriver of the Cains.

Black Brook and the Cains running clear, but ice can be seen still holding upriver of the BBSC pool. Eddie Colford photo. 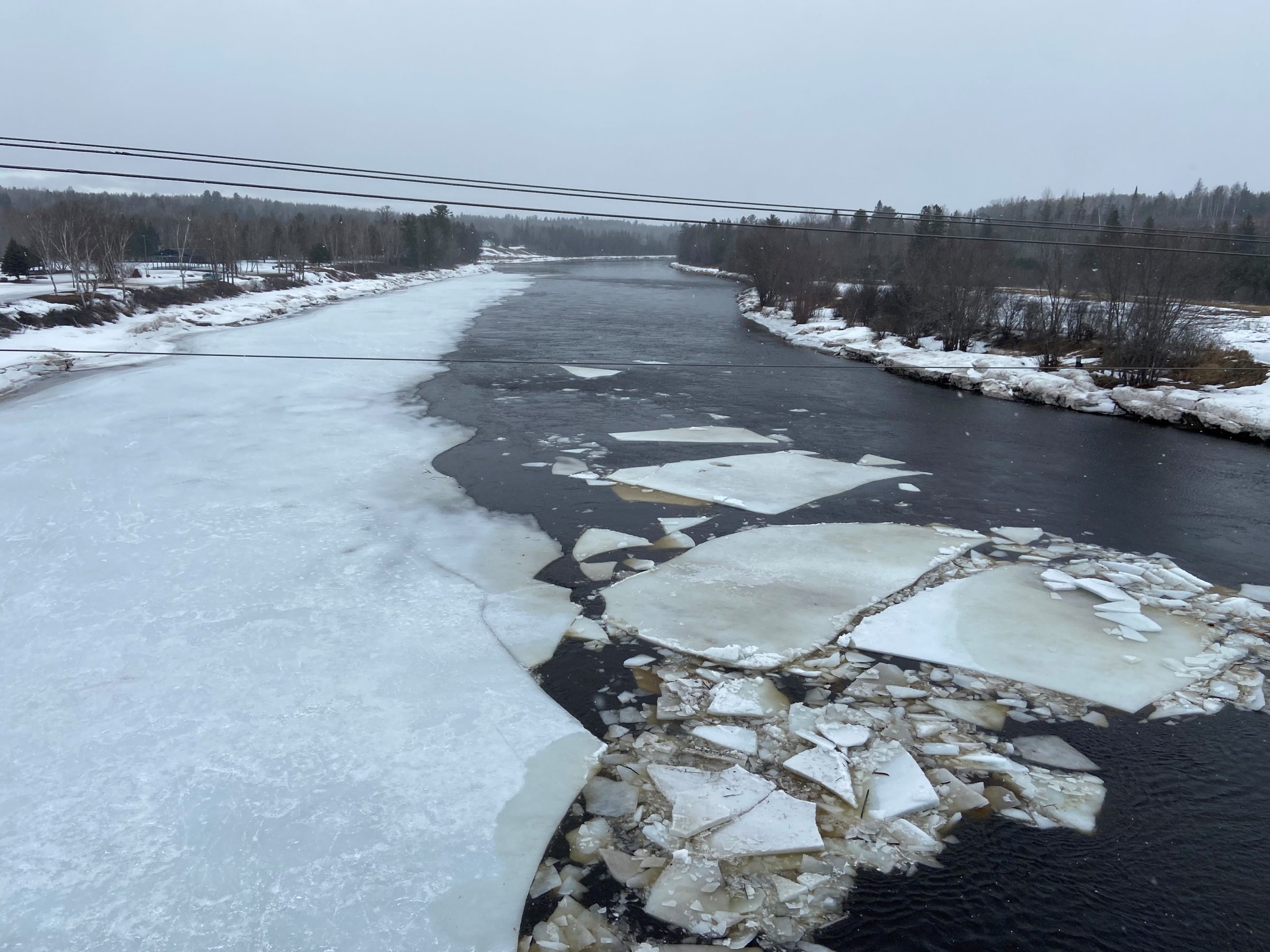 Dramatic photo by Byron Coughlan on 4/2 taken from the Blackville bridge looking downriver.

Finally today Byron and Tyler Coughlan of Country Haven sent me photos and a video of the Miramichi around their lodge and up near Doctor’s Island, and very substantial amounts of the river are now clear of ice.

The forecast the next few days is for temps to be a degree or two centigrade warmer than normal for daily highs, and a degree or two below normal most nights.  This is a great recipe for the river to remain in this relatively benign 2.5 meter height range while the rest of the ice gradually gives up and heads down river clearing the path for a clear river on opening day.

If you haven’t scheduled a trip to the Miramichi to sample the spring fishing, why not make this your year?  I personally haven’t been on the Miramichi in opening day for a few years, but I’ve already bought my license, and I plan to be there. 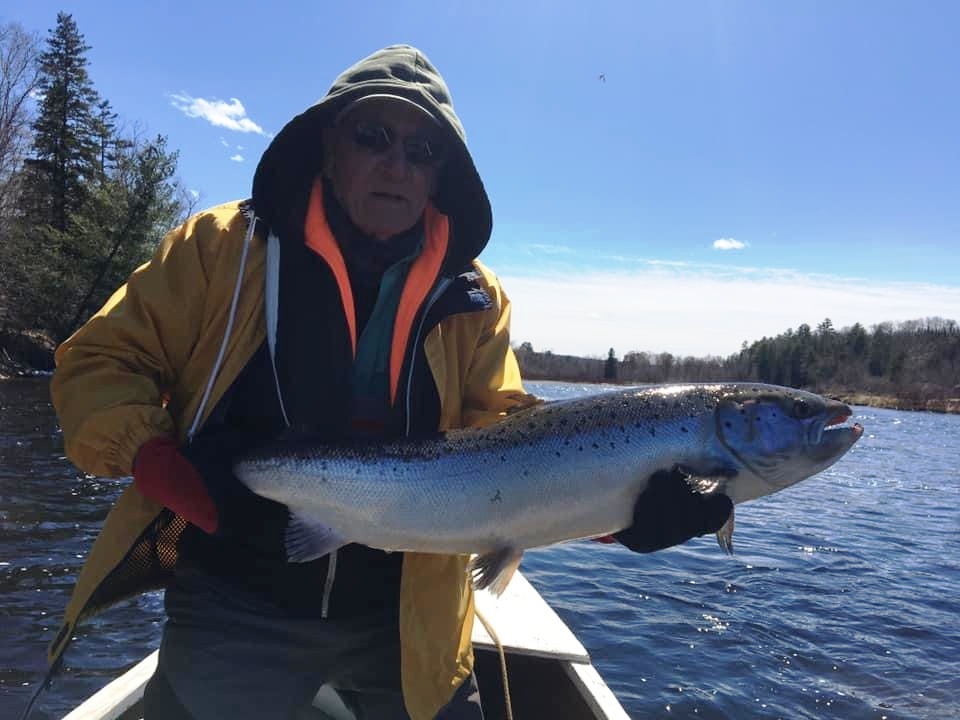 Okay, not all spring salmon are as impressive as this one from the NW in 2021, but some are… or was this really an early run bright springer?

FishPal Miramichi has the contact information for Wilson’s, Country Haven, The Ledges, and Upper Oxbow on the NW listed under Fisheries on the left side menu.  You can also check with FishPal Miramichi to stay in touch with catch information and fishing conditions throughout the season.  The lodges are also starting now to show vacancies on their individual pages.  Scroll down through my blog posts, and you’ll see that the one before this gave a fair amount of instruction about using the FishPal Miramichi site.

While you are on FishPal Miramichi why not go to the Newsletter link which is the bottom selection from the vertical menu on the left side of the home page.  At the bottom of the Newsletter page you can sign up at no charge to receive Newsletters that provide you with information on fishing vacancies, special deals, news from salmon rivers everywhere about special catches or happenings along the rivers.  I’ve subscribed to it for years and can truly say that I love reading each one that comes out.  I often put aside other things I should be doing to read the interesting news about our favorite sport.