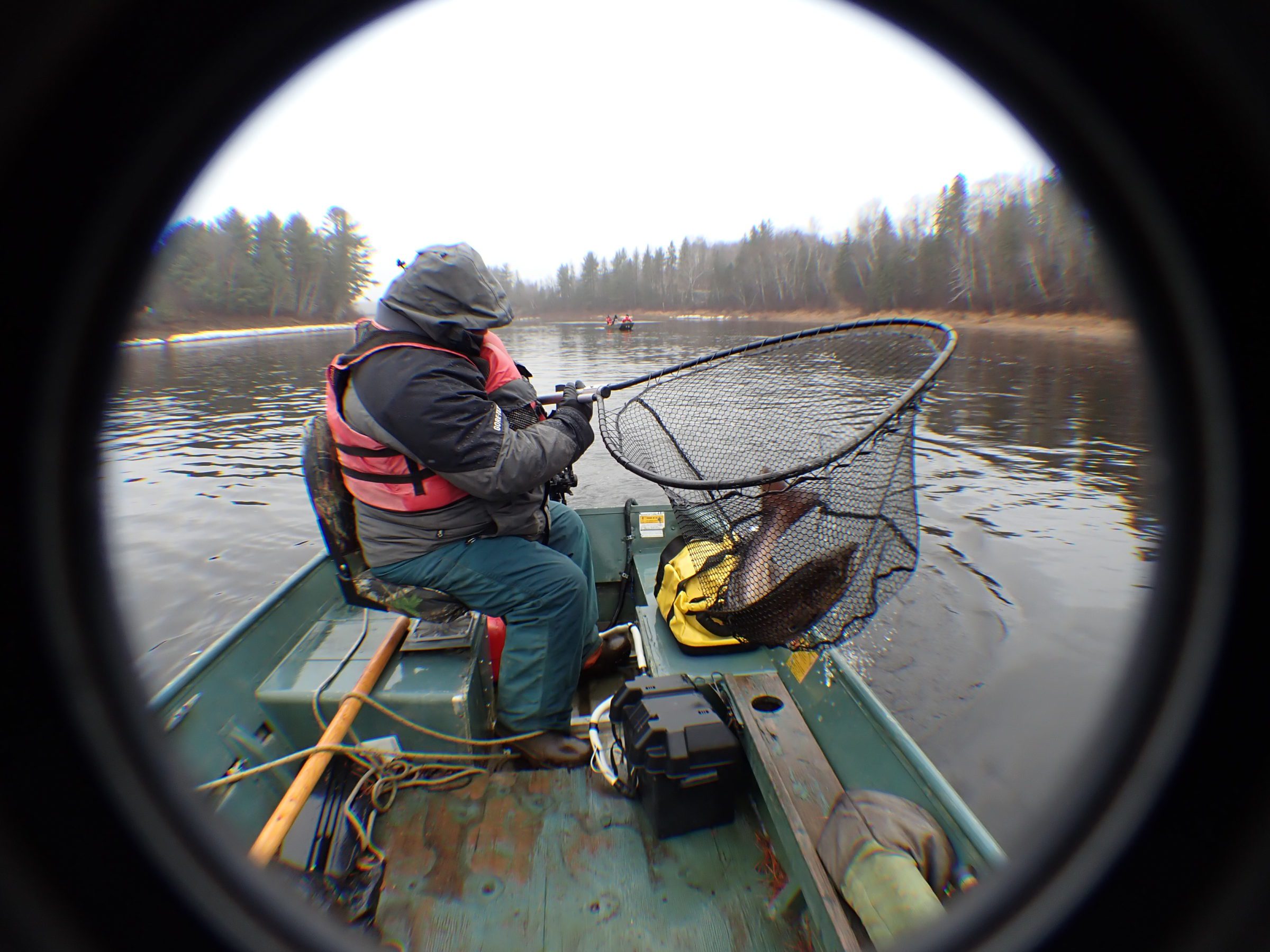 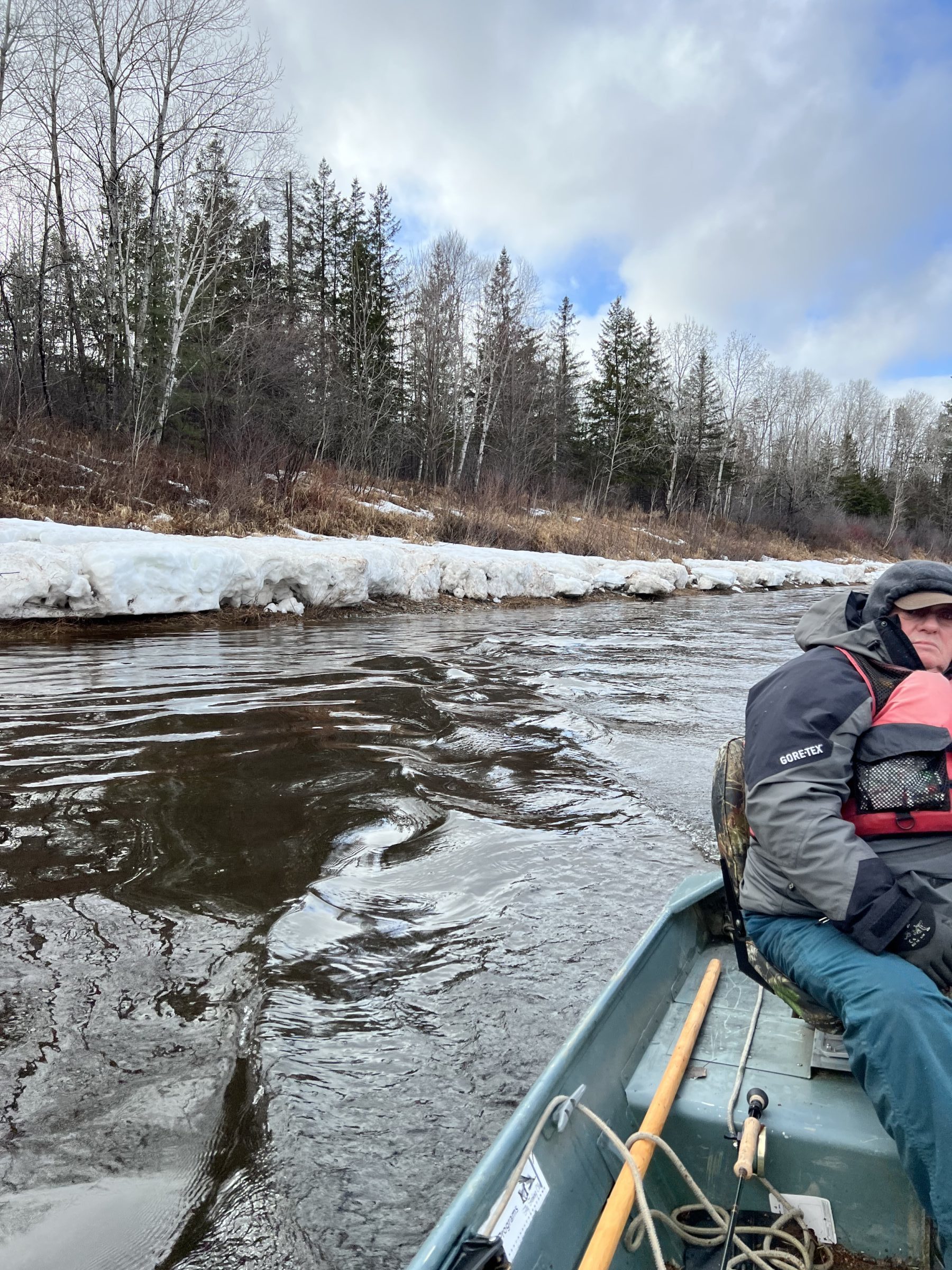 Fishing Friends – It has been a few years since I was on the Miramichi for opening day, but with the ice going out in time, and decent water conditions available, I couldn’t stay away.  I had half forgotten what a great adventure a trip to Miramichi country is at this time of the year.  The ride up from Falmouth was like rewinding the past couple of weeks.  It certainly isn’t summer here in coastal Maine, but the grass is green and growing, and the leaves are already out on the honeysuckle understory in the woods surrounding my yard.  Snow seems like a distant memory, though it has only been gone a couple of weeks.  By the time I got to Millinocket I could see snow everywhere in the woods.  On the ride across from Fredericton to Blackville all the streams were rushing along bank full.  It was exciting.  If only we could save a little more of that for mid-July! 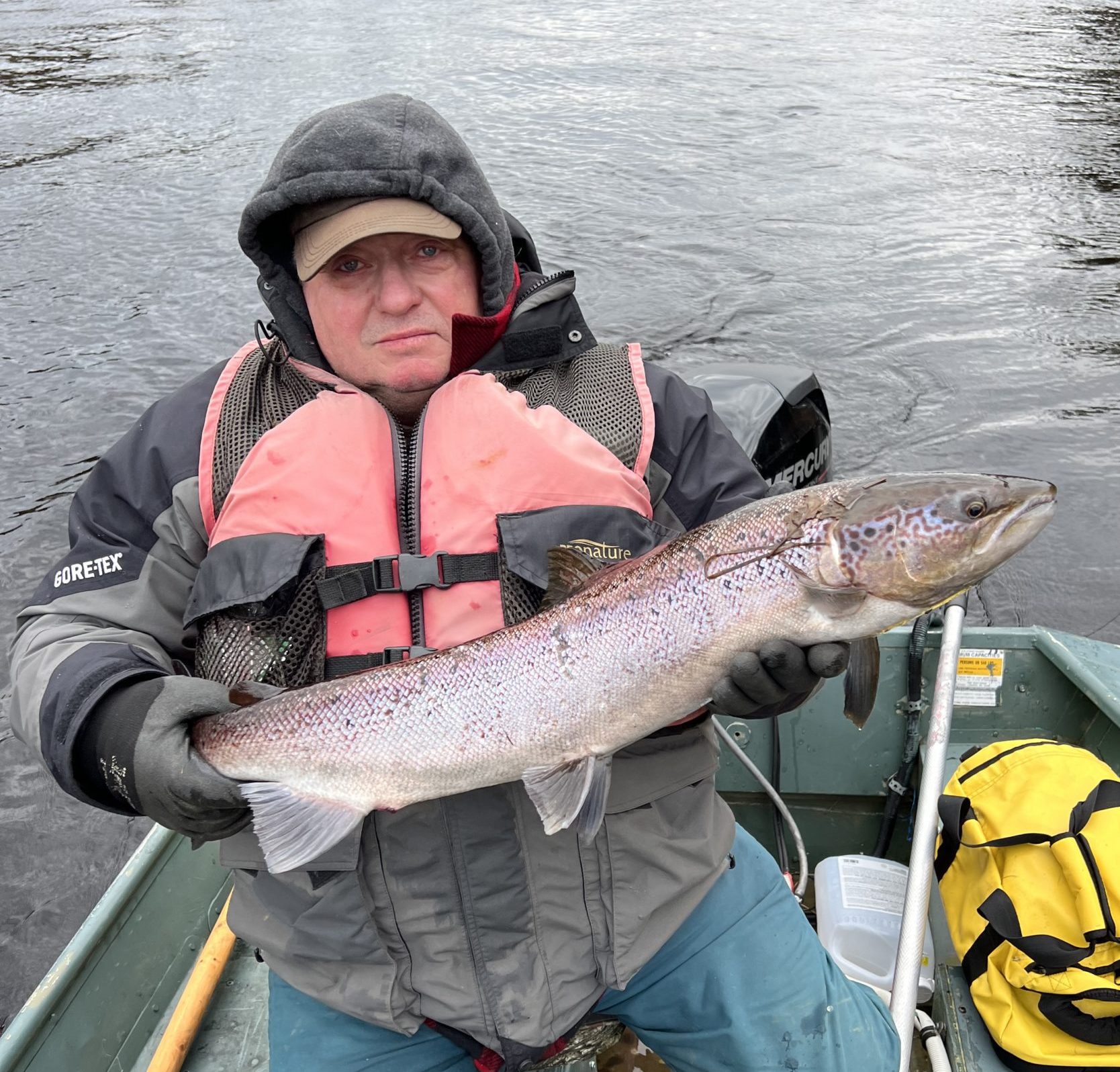 A good-sized salmon kelt. It was very lively on the line.

I arrived on Thursday afternoon and had to unload in a cold rain.  A half-dozen, skinny deer where looking for anything nourishing amidst the dead grass in the fields along the driveway.  Darrell and Nick already had the swallow and bluebird boxes up around the yard, and one of the long canoes was upside down on saw horses, waiting for some better weather to re-coat the bottom.

Opening day dawned gray, cool, and raining lightly – a perfect fishing day…  Like so many spring fishing days, Friday, April 15, 2022 was a day to protect yourself from the elements.  I had on standard issue green, wool pants, heavy flannel shirt, thick wool sweater, Thinsulate vest, and an Orvis rain jacket.  The most important equipment of all, though was on my feet.  I had never spent an opening day with warm feet until this day.  The new Lacrosse boots that WS Emerson had donated to our MSA winter event, combined with a single pair of Darn Tough boot socks worked like a miracle.

Over the years I’ve done most of my kelt fishing in the “Golden Horseshoe” so-named by Wades Fishing Lodge for its good numbers of kelts, and in the general vicinity of the mouth of Cains River.  I had always heard about the good fishing around the Doctor’s Island stretch of the river, but since it was twice as far away as the Cains, and my early guides on the river weren’t used to fishing it, I never went there.  That area, though, is one of Darrell Warren’s favorites in his many years of spring fishing experience, so we ran down there for our start. 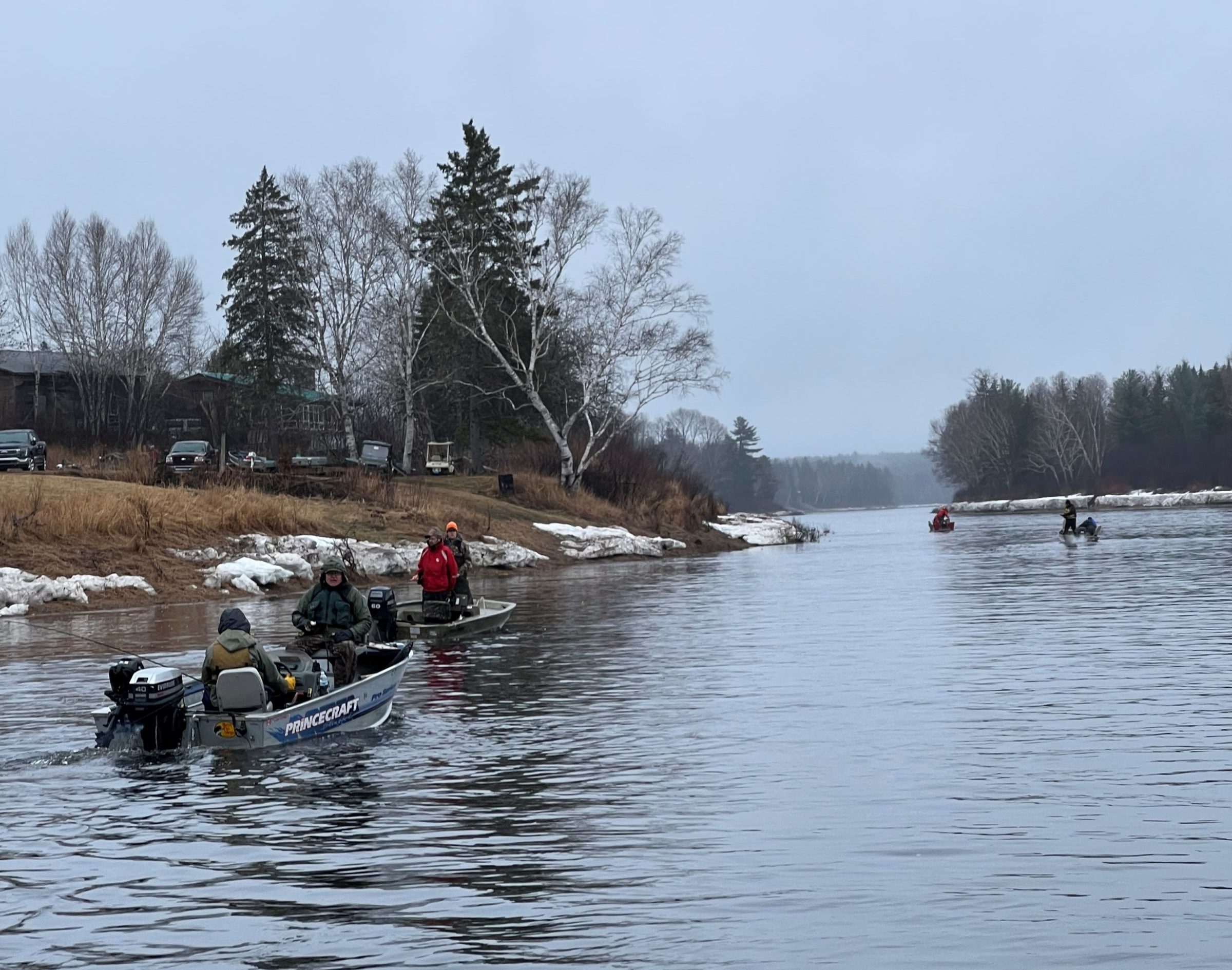 Lots of anglers were enjoying the good spring fishing on opening morning. 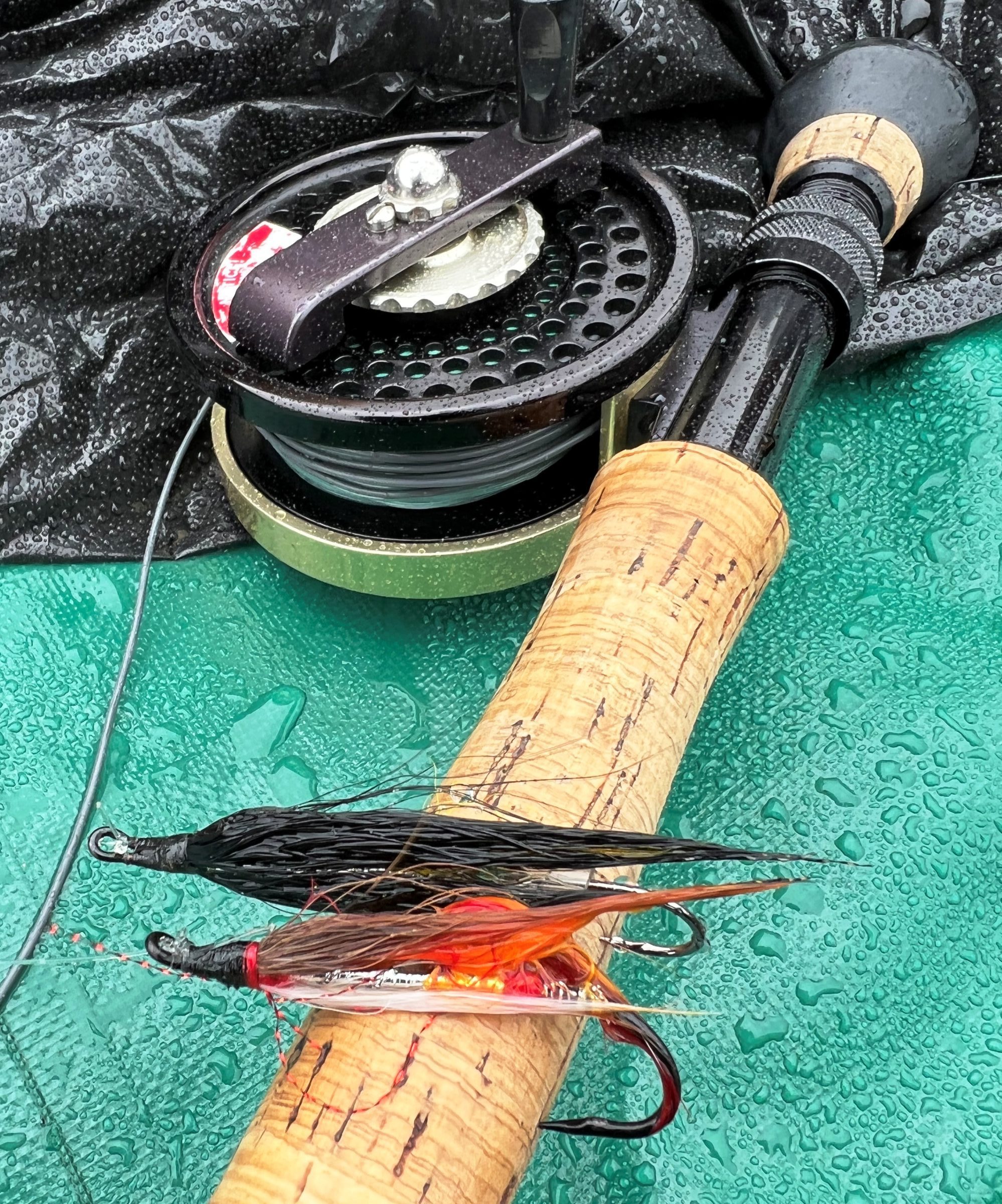 A couple of productive spring flies. The red and yellow marabou in the foreground shows evidence of being chewed.  Note the barbless hook.

When we got down to Doctor’s Island there were already at least a dozen boats working here and there.  Some were trolling, some long-lining along the shore, and others anchored and casting to the sides.  Spring salmon fishing is not a sport of delicate presentations and fine leaders at the end of floating lines.  I was using a 450 grain sinking-head line, and six feet of 20-pound-test for a leader.  I will say, though, that sometimes the fish are not just laying along the bottom as often thought.  We anchored up, and I tied on a #2 red and orange marabou streamer, threw it over the side with about 4 feet of fly line beyond the rod tip, set the rod down, and reached up to adjust the hood on my rain jacket.  The fly, still floating, drifted back with the current until the line became tight and the flow sucked it under the surface.  It was instantly taken by a feisty grilse, which began jumping around almost at the end of my rod tip before becoming quickly unhooked.  It was quite a start. 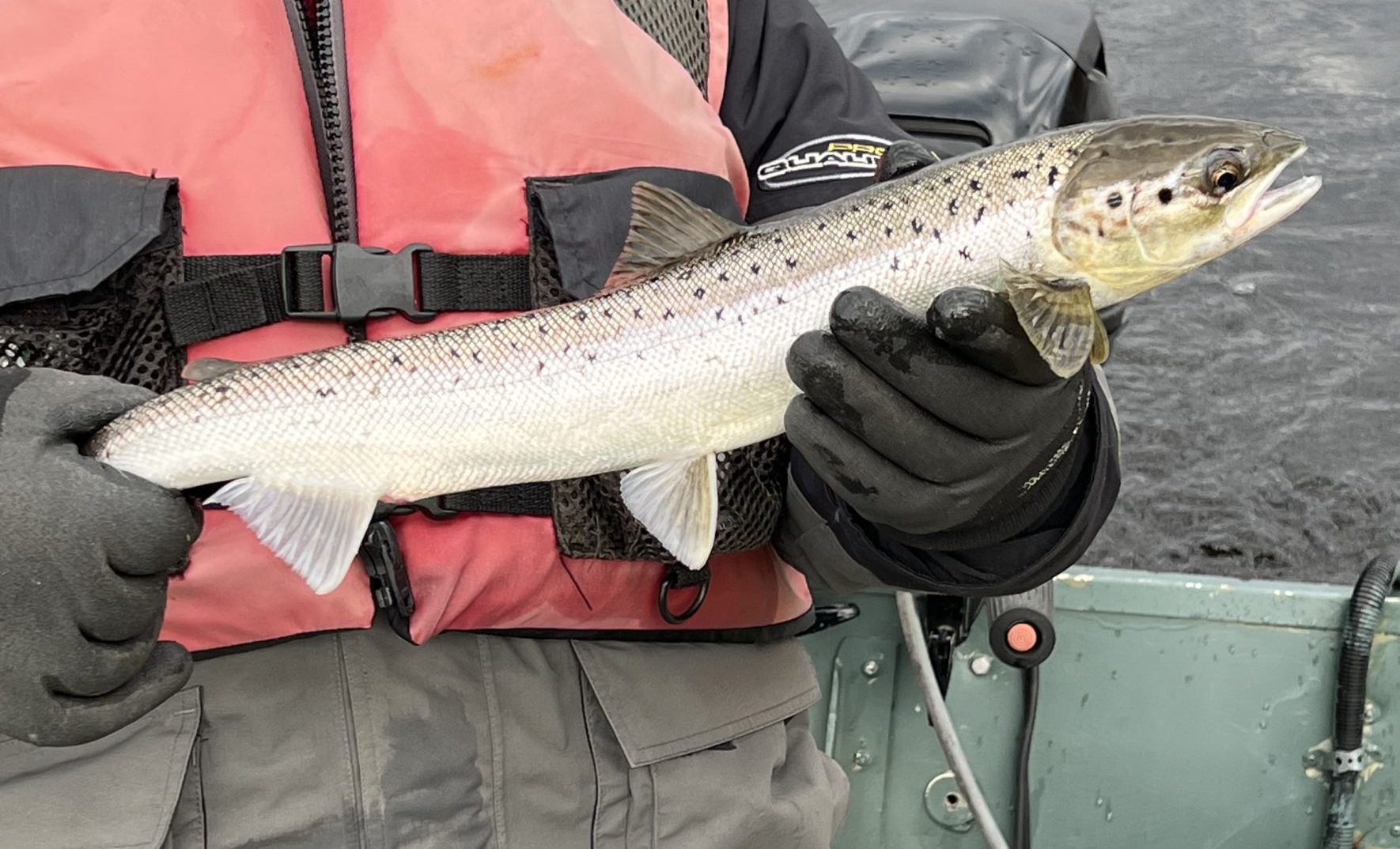 For whatever reason this wee grilse was much brighter than the other fish we saw.

Soon I became aware that boats all around us were hooked up, and playing and releasing fish.  The action was very good, and I was pleased to see so many fishermen with the big, rubber landing nets taking the time to release their fish with the care that these salmon deserve.  A fairly high percentage of the kelts that have survived to this point will go a short distance off the coast, rebuild on smelts and other inshore fish, and return during the same summer as repeat spawning bright fish.  These fish are potentially very valuable spawners for the Miramichi.  I can tell you the conservation ethic has come a long way in the brief 20 years that I have been participating in this fishery.

David Donahue has been restoring the old buildings on Doctor’s Island.  Click the bold link to see this movie of the main lodge with the New Brunswick flag flying on opening day.  IMG_2850

It appeared to me that there was a fairly even mix of grilse and salmon, and even though it was early in the season I thought the fish looked to be in very good condition.  Another bonus to the spring fishing are the brook trout.  We caught some everywhere we fished.  Most were in the 10 to 12-inch size range – nice brookies – but one of Tyler Coughlan’s customers from Country Haven got one that Tyler said was around 2 ½ pounds, a really lovely fish, and probably a sea run.

The action was quite a bit slower in the afternoon session.  It rained all night, and on Saturday morning the river was rising and comparatively dirty with a fair amount of grass.  We opted for a change of scenery, and close to the shoreline a few hundred feet below Black Brook we came across a little hot spot that produced a few quick fish plus other strikes.  David Donahue, who lives near Doctor’s Island where his father guided for many years, had persuaded me to try a dropper rig.  I tied a dropper loop in my leader about 4 feet above my marabou point fly.  To this loop I attached a #2 Black Ghost.  It seemed that the grilse consistently took the dropper fly while the salmon took the point.  It certainly wasn’t a huge sample, but that was the way it seemed to go.   I even observed  a grilse make several attempts at the Black Ghost while we were trying to net a salmon hooked to the other fly. 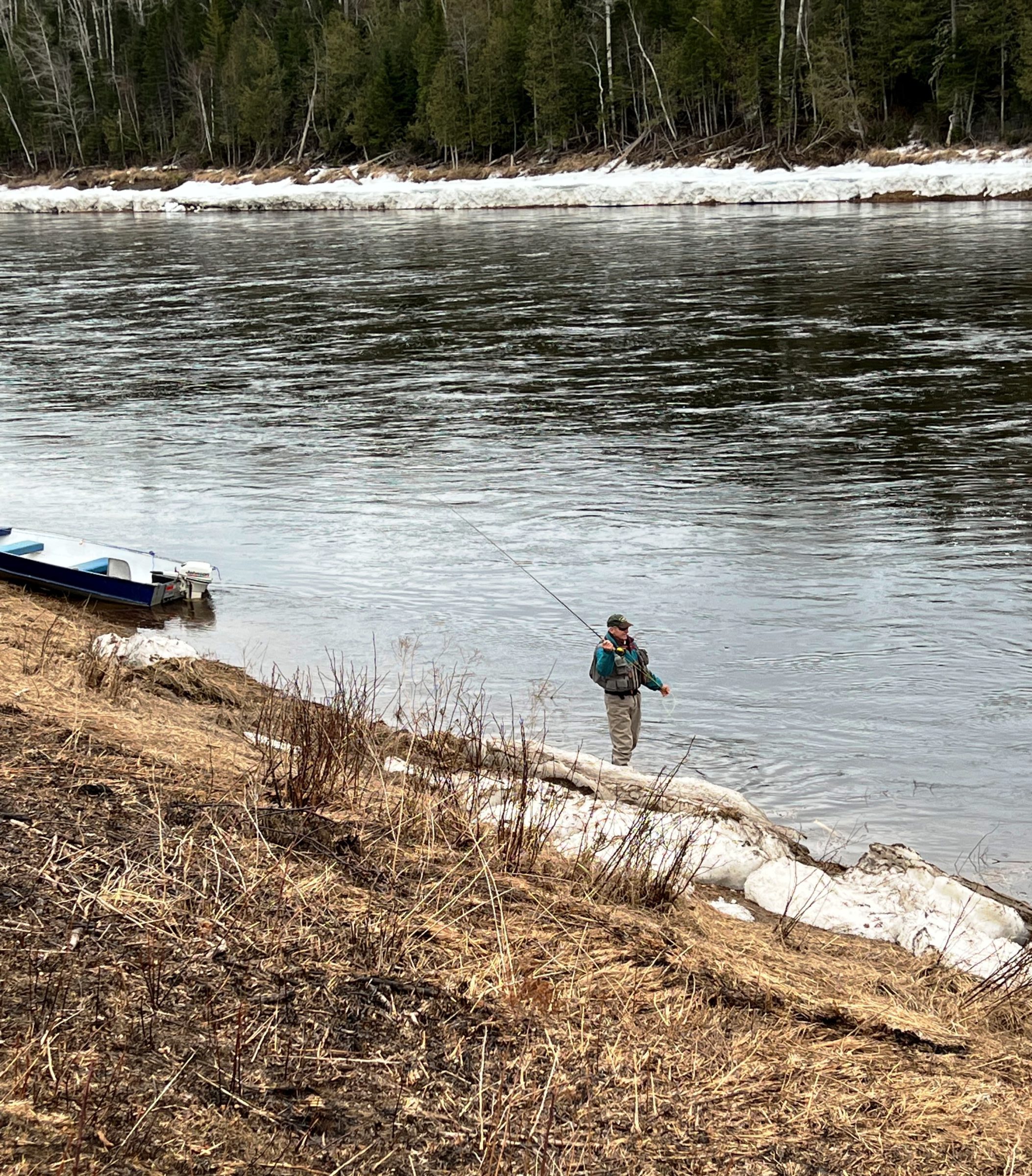 Dawson Hovey works his way down a long grassy shoreline in the Rapids.

In the afternoon on Saturday Dawson Hovey and I fished a stretch down in the Rapid’s section.  This was shore fishing along a long grassy bank, and I really enjoyed it.  Darryl Curtis had fished it with great success on opening day.  Like all fishing on Saturday it was much slower than Friday, but still we pecked away at them.  I was casting a Spey rod with a fast sinking tip, and in addition to landing a grilse and a couple of trout, and losing a good salmon, we had 6 or 8 pulls between us that didn’t end up as secure hookups, but it did tell me that fish were there, just hesitant to strike.  Darryl who has lived and guided in The Rapids his whole life blamed it on a cold east wind.  His opinion is probably better than most.  An added bonus was watching a couple of adult eagles surveying a Volkswagen-sized nest in the top of a giant white pine across the river from us. 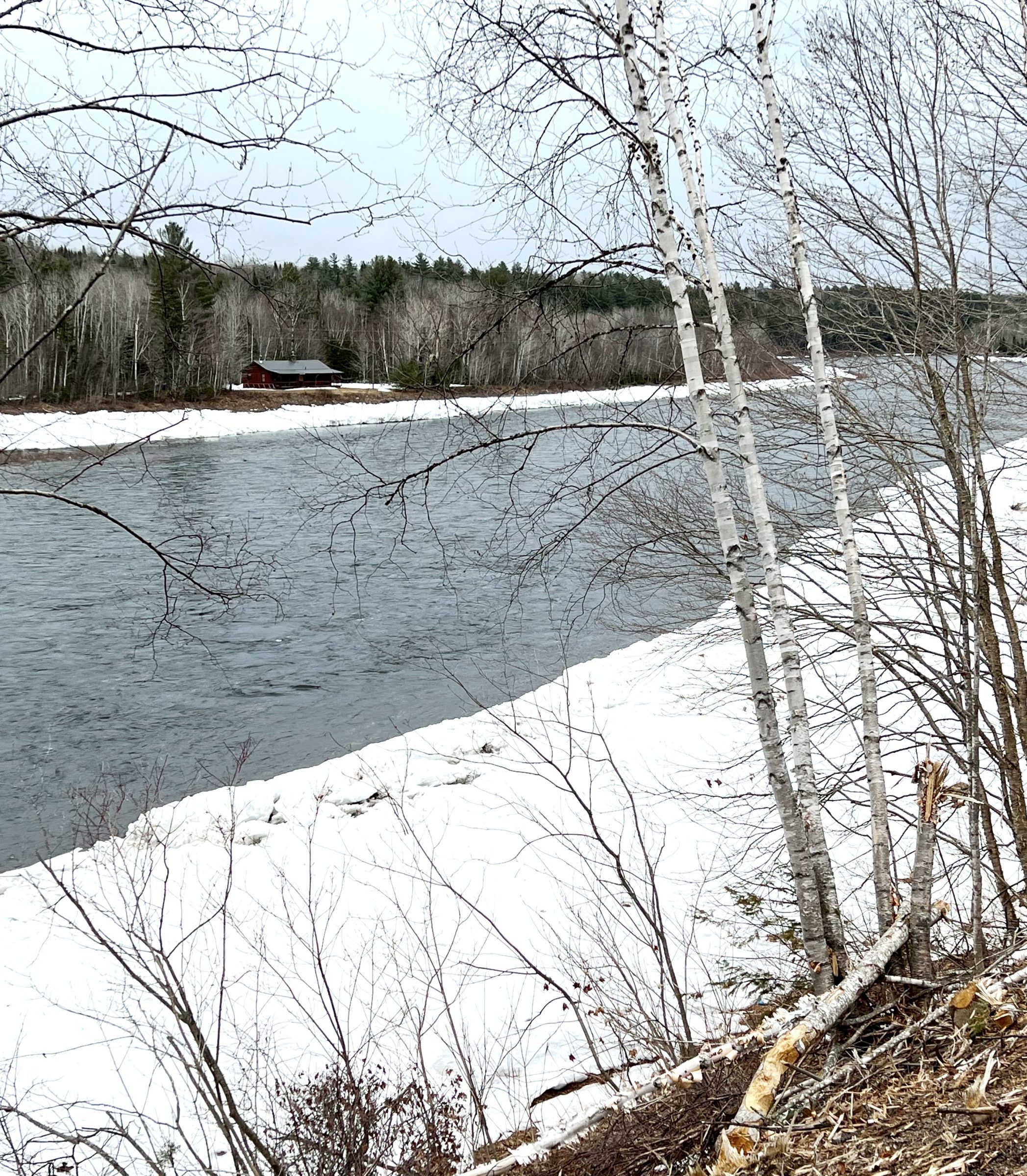 Still quite wintery up in Hayesville on Easter Sunday.

On Sunday Kevin Harris, past chairman of the MSA board, showed up to pick up the Chestnut canoe he bought at the MSA auction, and Dawson and I drove to Fredericton for Easter dinner via the home of Bill and Joan MacKay in Hayesville.  I wrote about Bill who guided at Rocky Brook for more than 30 years in my May of 2019 blog – you can just scroll back to read it.  He turns 90 this August and is still fishing the Miramichi.  Dawson and Greg Sprague are putting together oral histories of the Miramichi, and are going to get more interviews with Bill this coming year.  Hayesville is a short drive upriver from Boiestown, but with that increase in altitude the winter clock rewound even further.  The river there was a blue pathway between two banks still thickly covered with ice and snow.  Out in the middle, though, it was roaring along with a fair amount of white water.  Bill who was a champion canoer in his youth, and has poled every inch of the Miramichi from Boiestown to above Burnt Hill many times, says that this is the first real whitewater rapid as you ascend the Miramichi towards the headwaters.

Let me call your attention again towards FishPal Miramichi.  I will be writing regular, hopefully weekly fishing reports and updates for FishPal Miramichi until we can find someone more local to the Miramichi to write them.  Check out the website for fishing availability at participating lodges, fishing reports, conservation news from the Miramichi Salmon Association, and any other info you can use on the river.  While you are on the site why not sign up for the rod alerts page and the monthly newsletter.  A little info on salmon fishing is the kind of thing one never minds having just showing up in their inbox.

There’s almost a month of good spring salmon fishing still to look forward to.  All the lodges on FishPal Miramichi participate, so give them a call and get in on the action.  After that there will be a week or two’s lull in the action, then the first bright salmon will begin working their way into the system.  We can hardly wait for it all to unfold.

Looking out over the heart of the famous spring fishing grounds of the Golden Horseshoe.  In the early 1900s, when William Francis Ganong returned from a tour of the great sites of Europe, he gazed out on a New Brunswick caribou barren and exclaimed “how he had hungered for such scenery” and I know exactly how he felt.

Thanks for reading.  While you’re on my website please sign up at the fish for free notices of new blog entries.

PS  Thank you for your support on the introduction of two new books from me, Black Spruce Stream and Maine to Montauk.  Both books have been top sellers as new books in their categories on Amazon.  You can check them out at the Brad Burns author’s page on Amazon at this link.