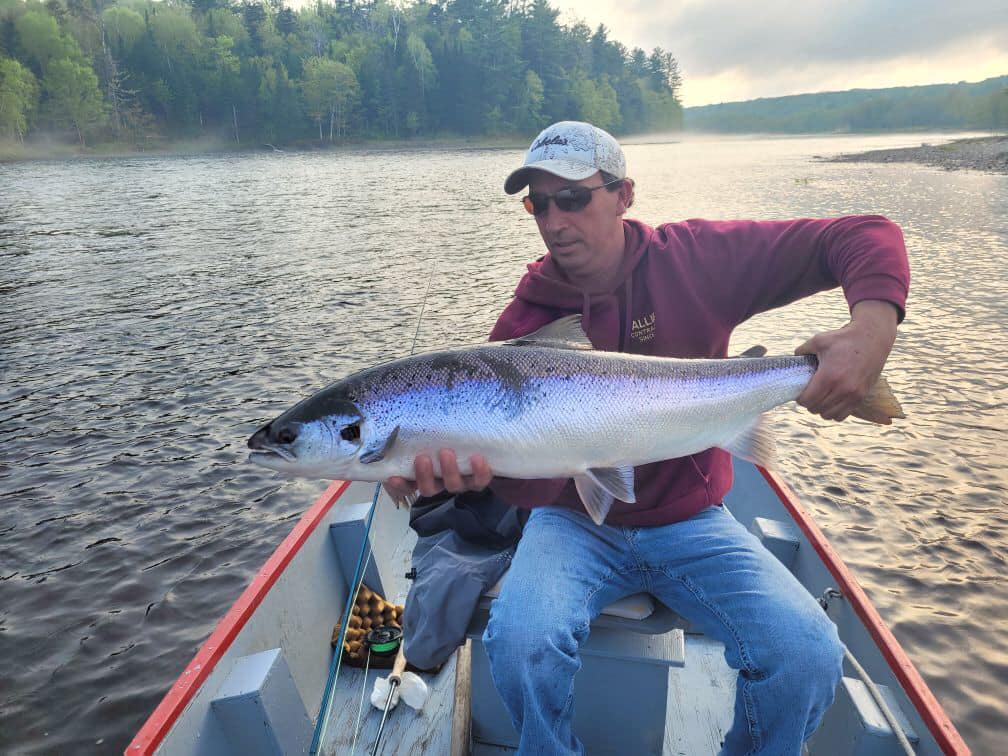 Colin Gilks caught this beauty in Blissfield on 5/22. It is the earliest bright salmon he has caught.

Fishing Friends – It seems that there are more opportunities right now than there is time to take advantage of them.  I thought that I would make a purely brook trout fishing trip up to the Cains this past week without the worry that I could have instead been fishing for bright salmon.  I got fooled.  On May 22, 2022, Colin Gilks fishing in Blissfield, caught this beautiful salmon that measured 40 inches with an 18-inch girth.  It must have weighed around 20 pounds.  I’ve seen Colin’s photos with other early fish over the years.  I messaged Colin for some hints on how he manages this early success.  He was out on the river when he got my message, but I’ll update this blog with any info after he gets back to me, and I’ll pass it along.  This fish, caught on the 22nd, was said by him to be his earliest ever.  It is, though, just three or four days ahead of some other salmon landed in recent years.

What the early catches, especially if we end up seeing more of them, may indicate is a larger than normal run for the season.  The annual run is often compared to a bell shape, and if the edges of the bell shape are wider – sticking out into May and lasting until November – it may just indicate a larger overall bell with the shape being more or less normal.  This was certainly the case with 2011.

I fished for Cains trout during one evening session, and then three more or less complete days on the river.  I worked the area around my camp and running down to Six Mile Brook as well as the area around Muzzerol Brook.  There were individual hot spots that changed a bit from day to day, but we found some brookies everywhere that had a little depth to the water. 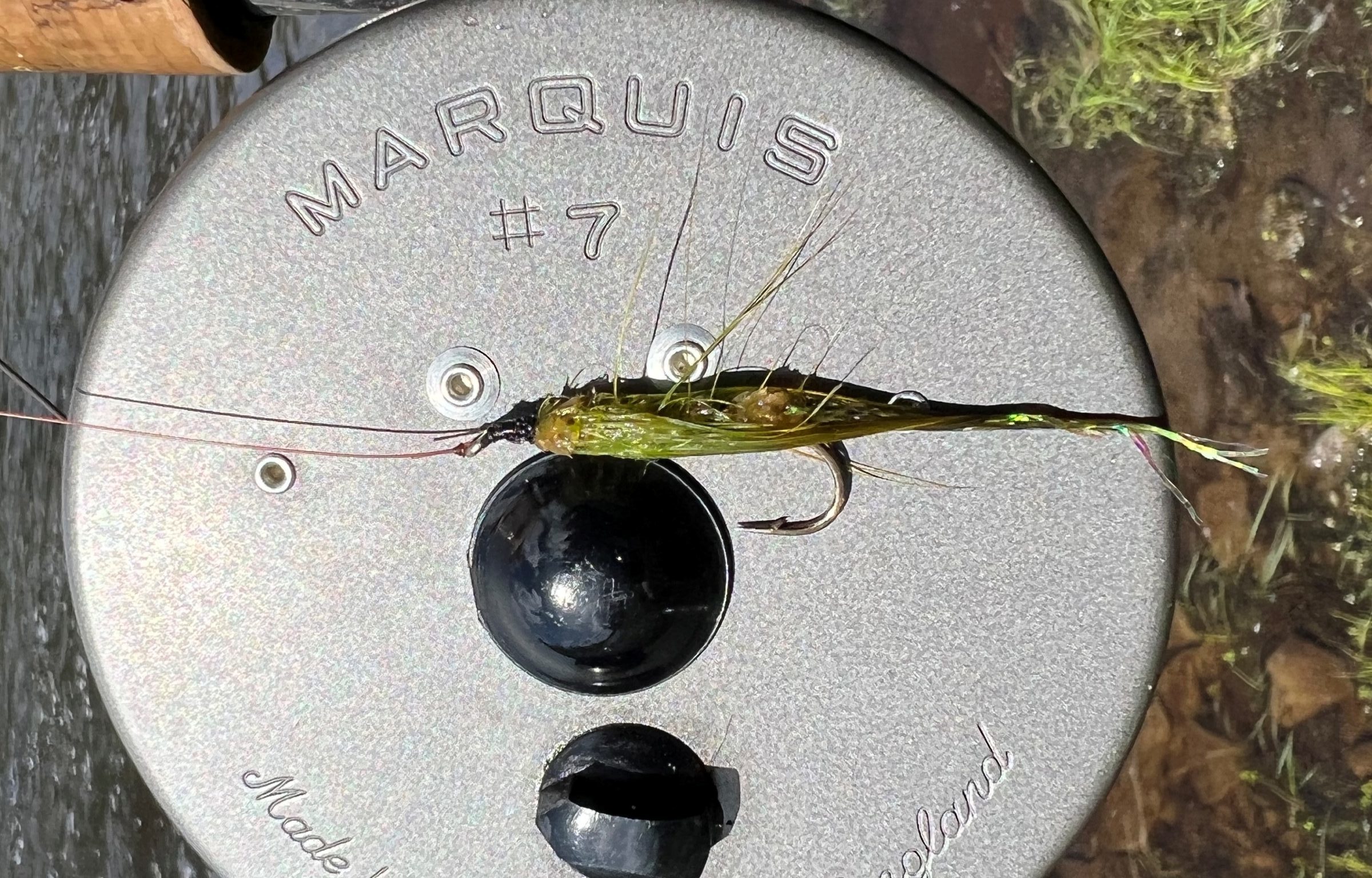 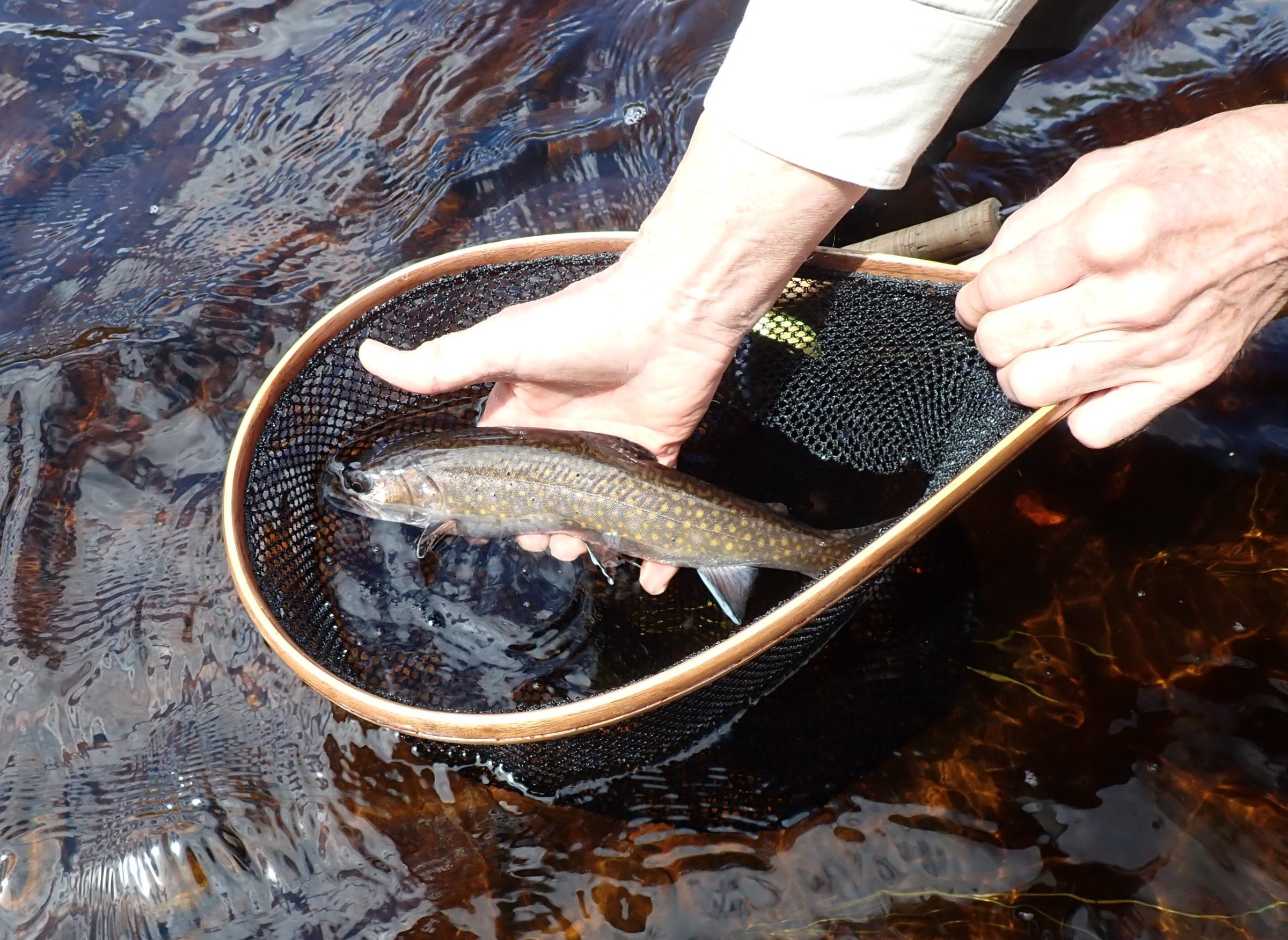 Dawson Hovey came up and joined me for a couple of days, and he fished strictly dry flies and a floating line.  His most successful fly was a small Carter Bug.  I went back and forth between floating and a sink tip with which I fished a variety of wet flies including a #8 Olive Wooly Bugger that was my most productive.  The first morning of the trip I found the deep slow section of a pool that had a solid pick of brookies up to about 16 inches.  I probably landed about a dozen fish in the 12 to 16-inch size range, which by my standards is terrific brook trout fishing. That exact same area was very quiet for the rest of the trip.  There were great hatches going on, mostly of caddis, but there were mayflies too.  In spite of the apparent food available I can only conclude that most of those fish moved somewhere.  None-the-less we caught fish in all of the sessions, though individuals much larger than 12 inches were hard to come by.  Incidentally Dawson’s son Tristan land a 1 ½ pound sea run over in Blissfield on SW Miramichi during the same time. 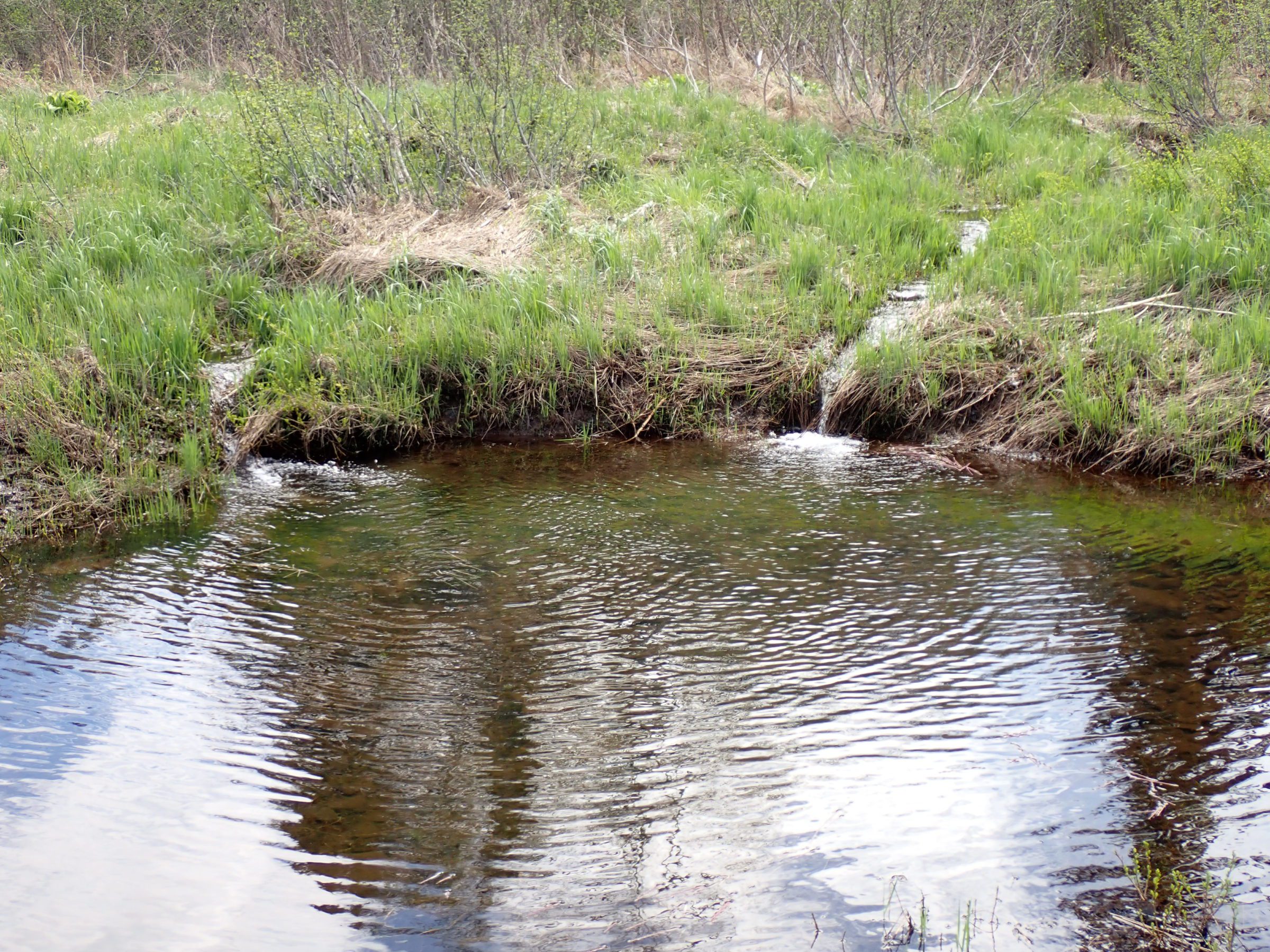 No shortage of cool spring water on the Cains at the moment.

I ran my experiences by Mark Hambrook, past president of the MSA, who has tons of experience with Miramichi brook trout.  Mark says that at the current time all the brook trout in the system are moving close to the locations where they will find their cold water refuge when the weather becomes hot.  Some fish, he says, will stay in the river feeding on the abundance of food until the last minute because they only have to go a short distance to find cold water refuge.  This refuge must have sufficient depth to protect the trout from bird predation as well as having cool waters.  Other trout might have much further to go, and they can literally be here today and gone tomorrow. 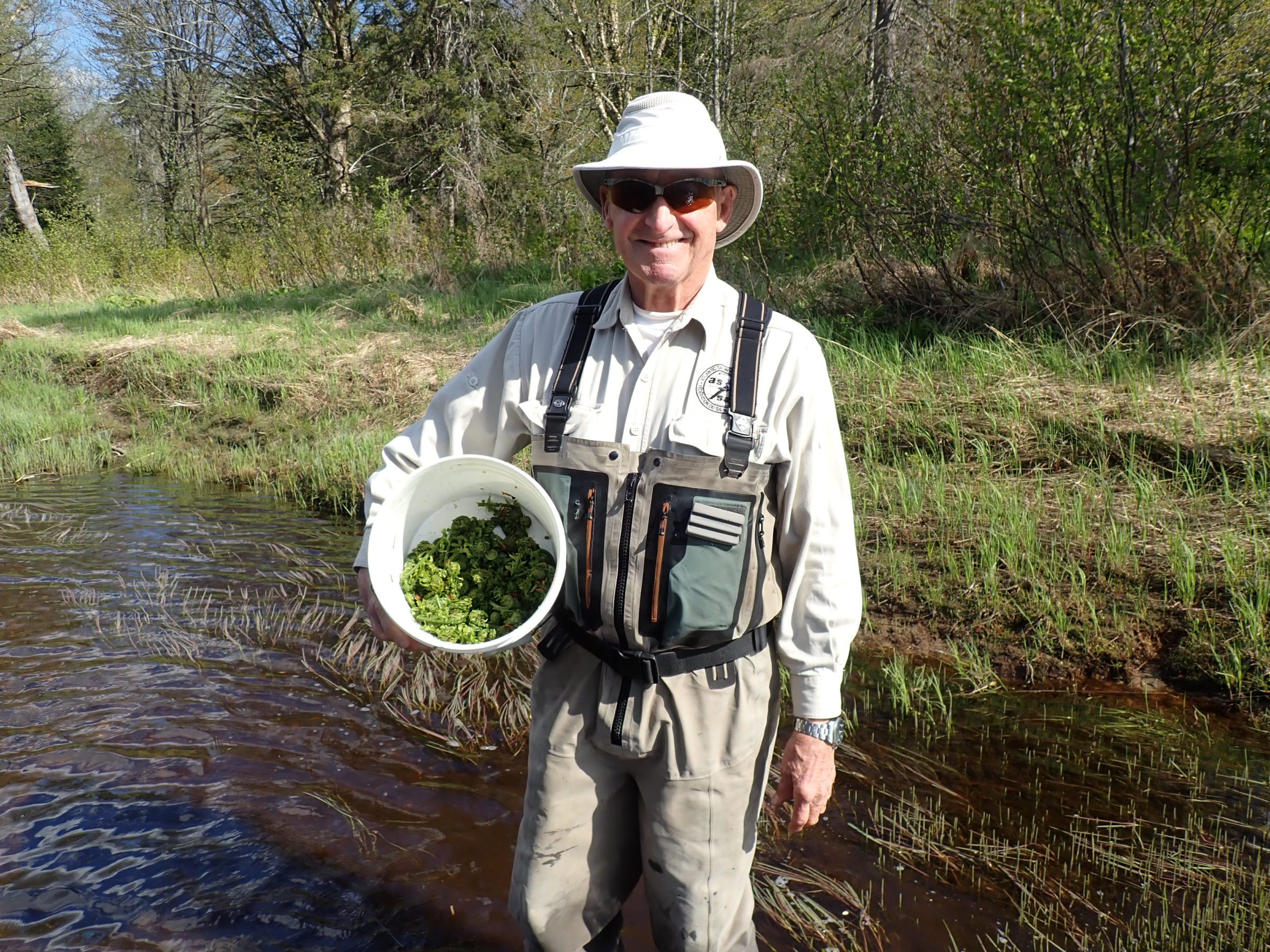 Another great thing about our trip was that it still wasn’t too late for some fiddlehead picking. The ones Dawson Hovey is holding went well with a moose chili that he supplied. 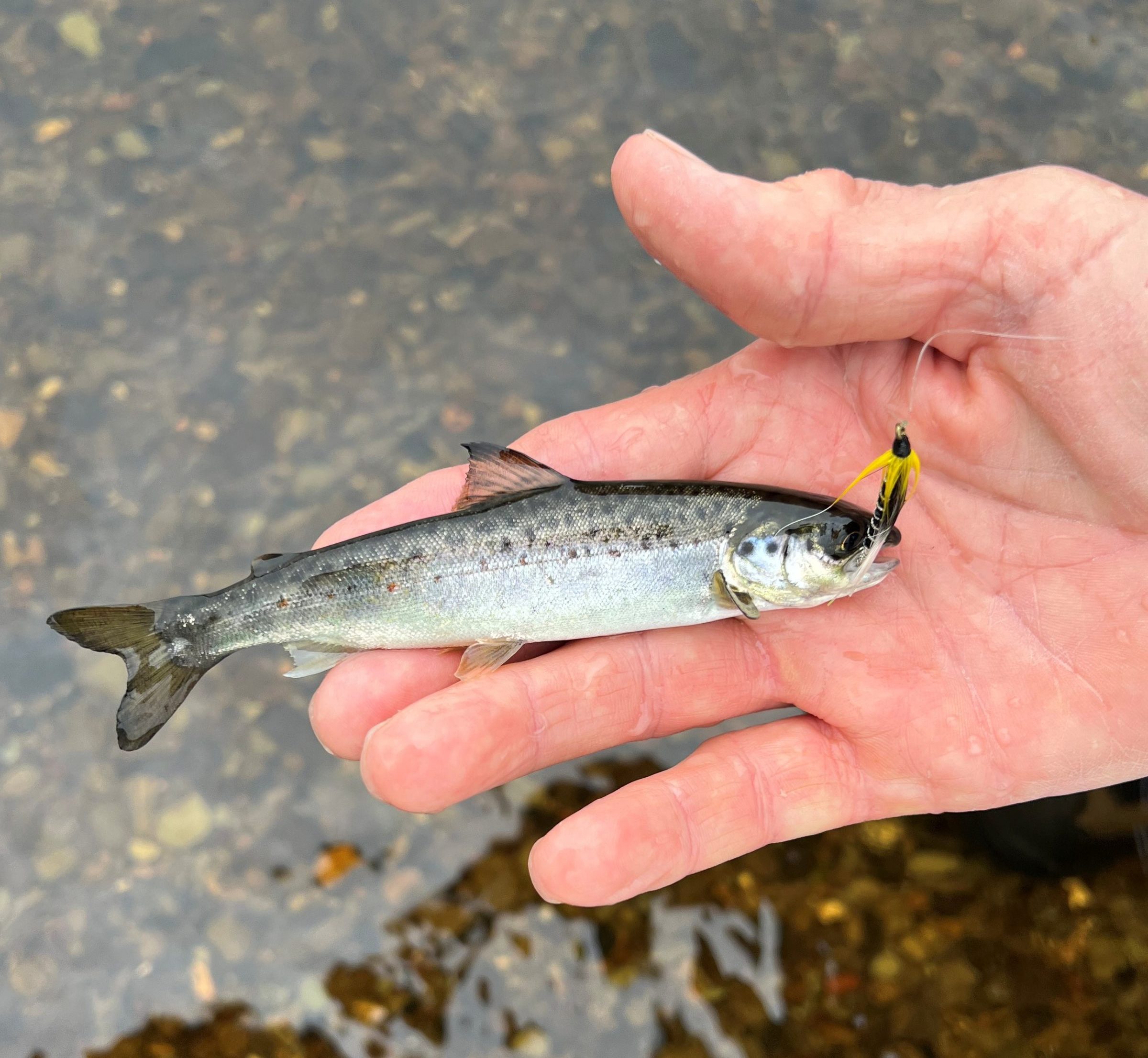 Another interesting catch were some salmon smolts.  We tended to find those in fast water around rocks – the same lies I find adult salmon on in the fall.  These were beautiful little silvery, red and black spotted miniatures of adult fish.  We caught 4, but had quite a few other tapping little strikes in the same locations that I assume were also smolts.  I estimated the smolts we caught at about 5 inches, and Mark confirmed that the average Miramichi smolt is about 4.92 inches.  He also said that this past weekend the MSA smolt wheels on the Dungarvon and the NW Miramichi experienced a heavy smolt run.  I guess you can confirm that this put the smolts down river right into the thickest possible concentration of striped bass that are currently spawning on both the SW and the NW branches.  Hopefully the bass will be concentrating on sex and the smolts can sneak through. 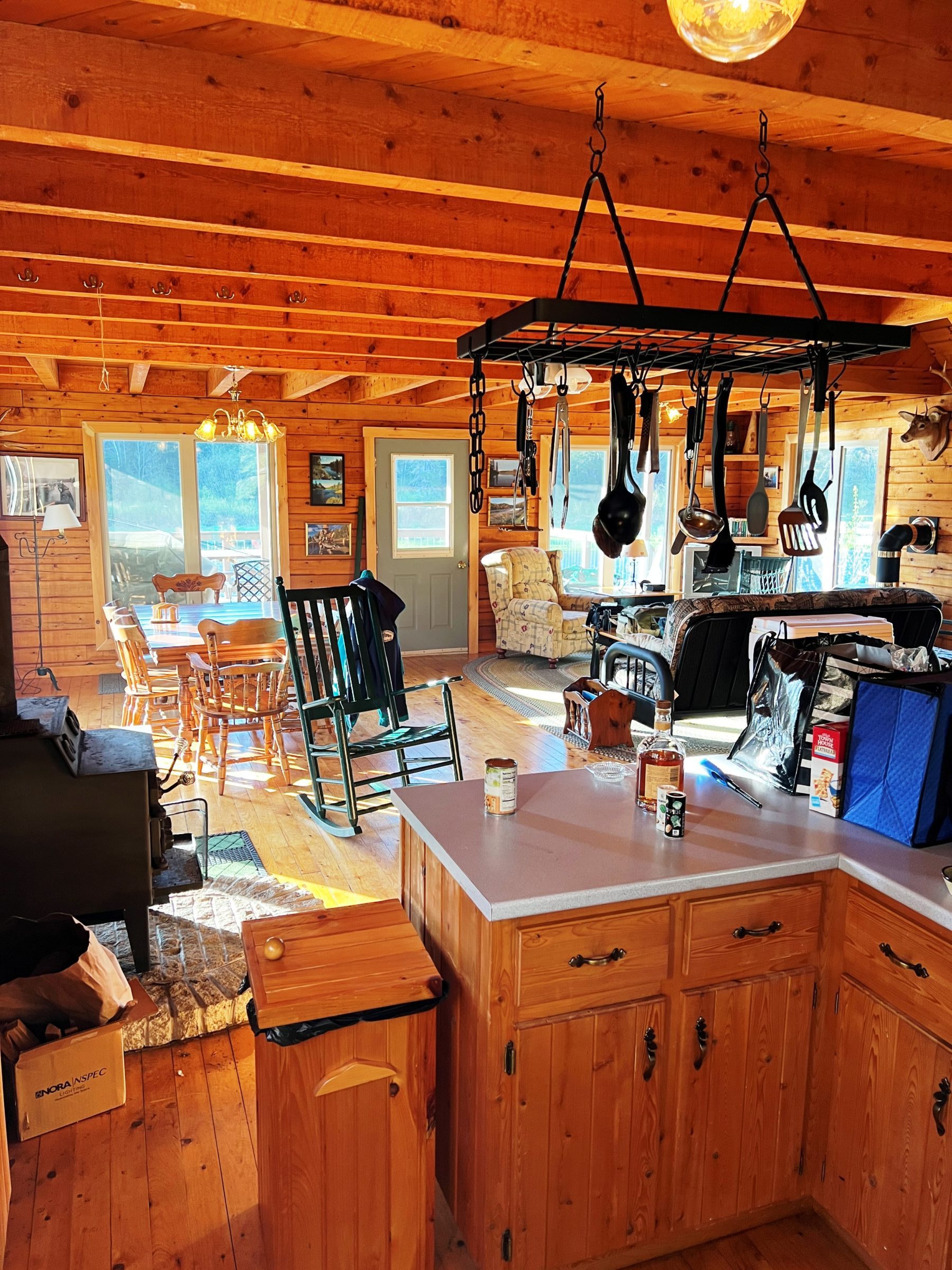 It was great to spend a few spring days in camp on the Cains River.

The temperature gauge on the SW Miramichi is not yet working, nor is the water gauge in Blackville.  Hopefully something will change and we will soon have a place to get that information on line.   We did take the temperature in the Cains on 5/21 and it was 11C or about 52F.  It still felt plenty cool to wade in the river.

There is still time to get in on the June and July fishing for bright salmon on the Miramichi.  Check out FishPal Miramichi at this link.  Go to Fisheries in the left side menu to see what is available in fishing lodge openings, or Reports located further down the column to get the latest fishing reports.

It is time to go salmon fishing on the Miramichi! 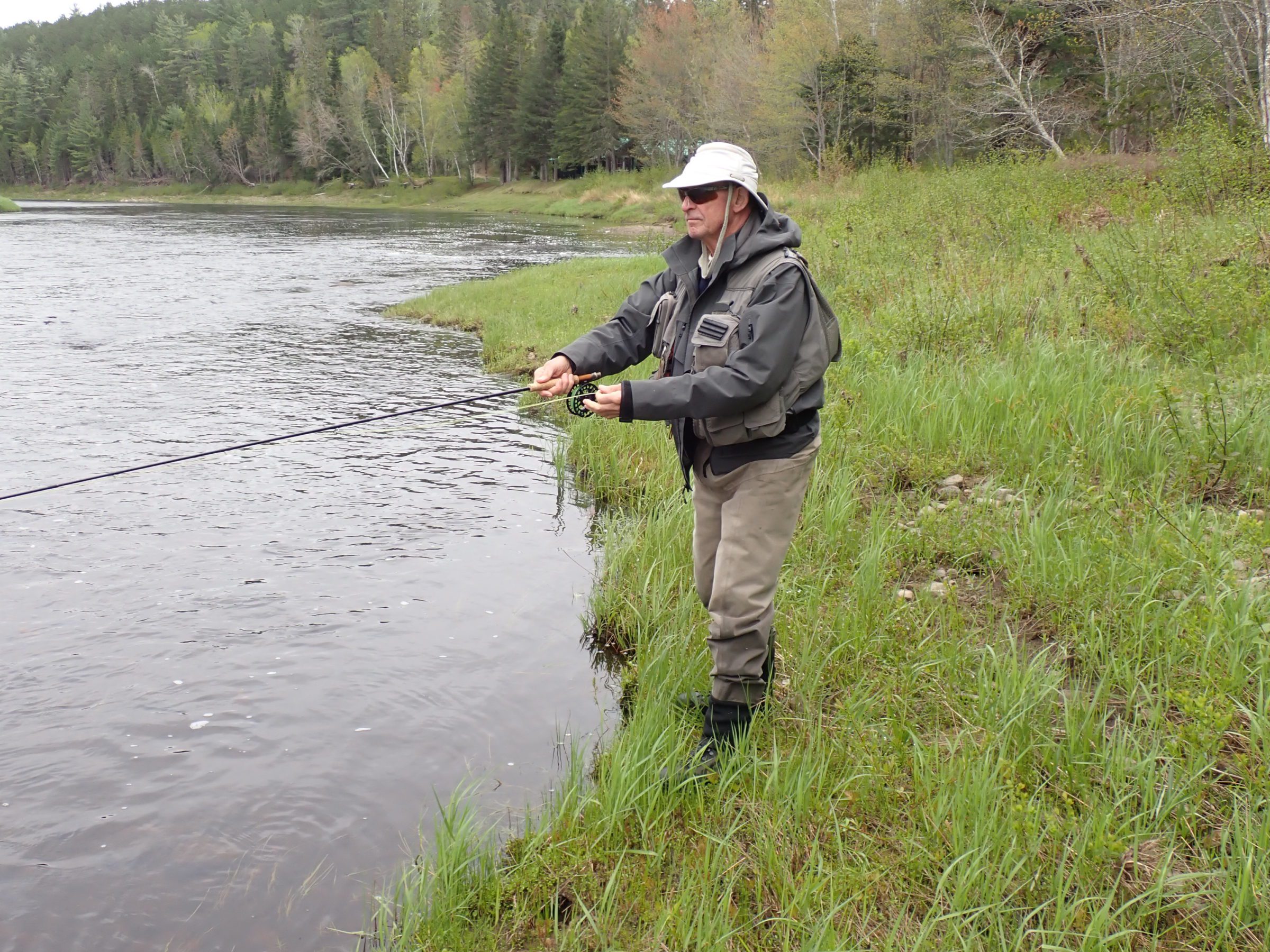 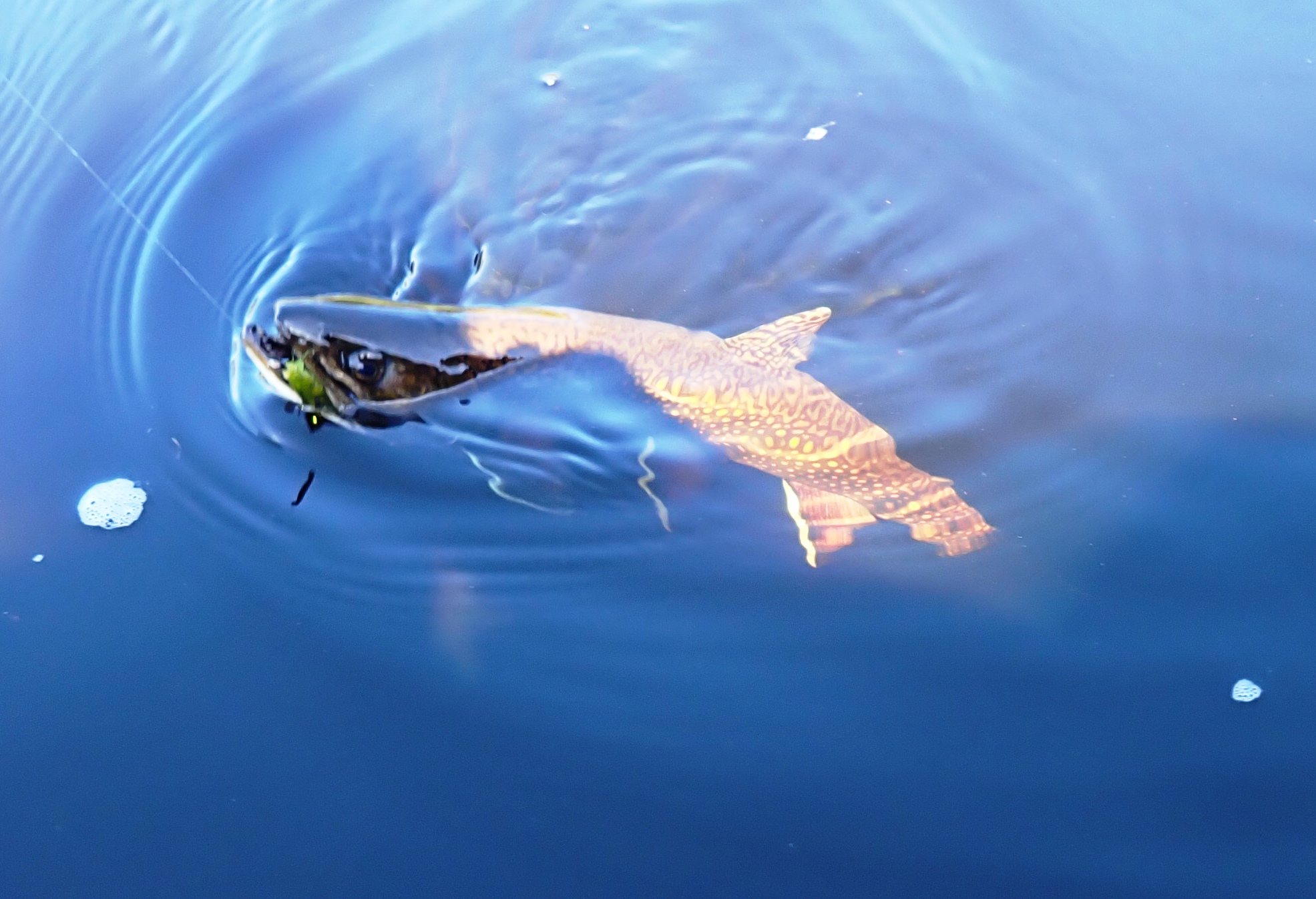 16″ male brookie with head in shadow of the canoe 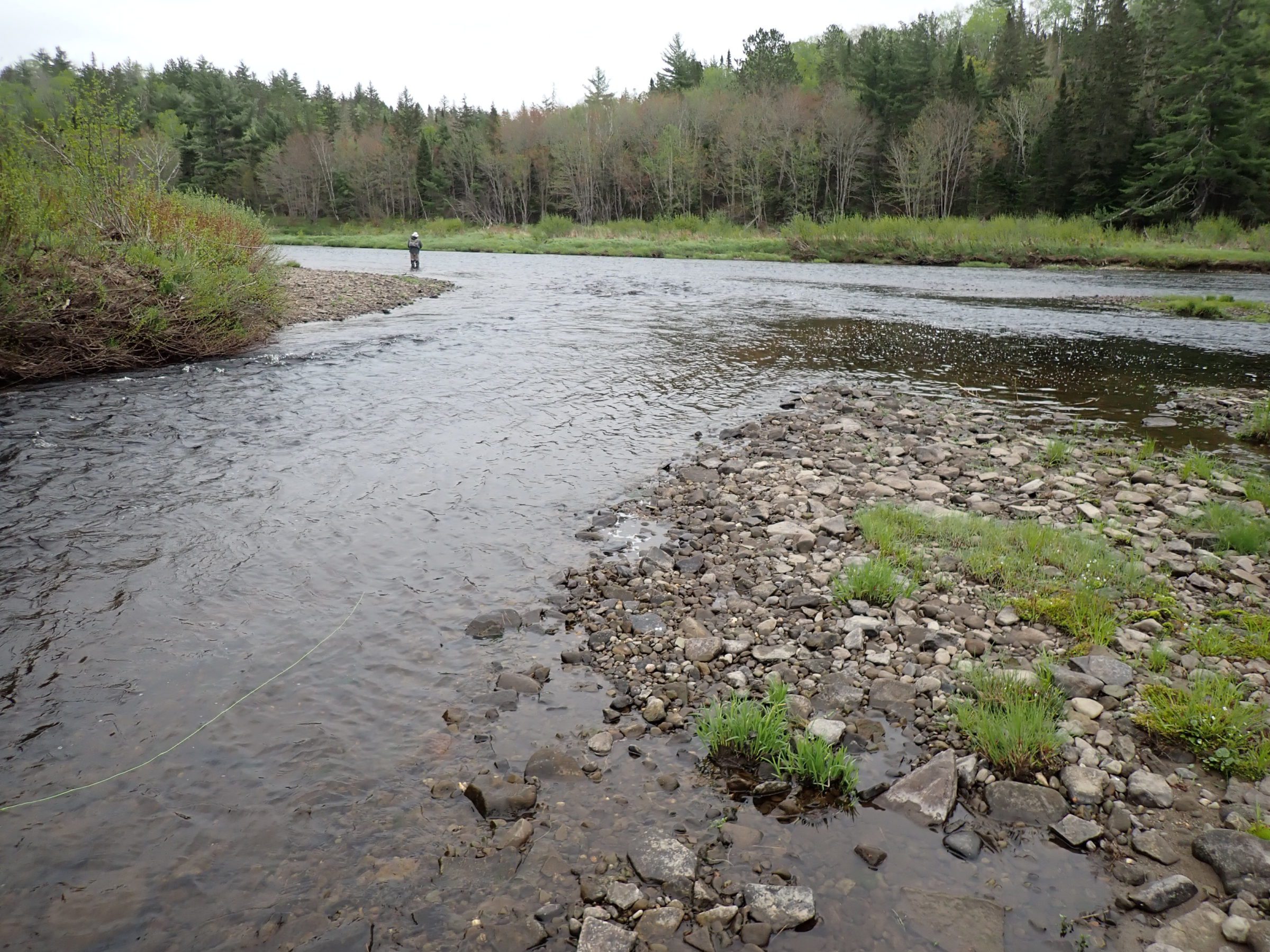 Looking out the mouth of Muzzerol Brook