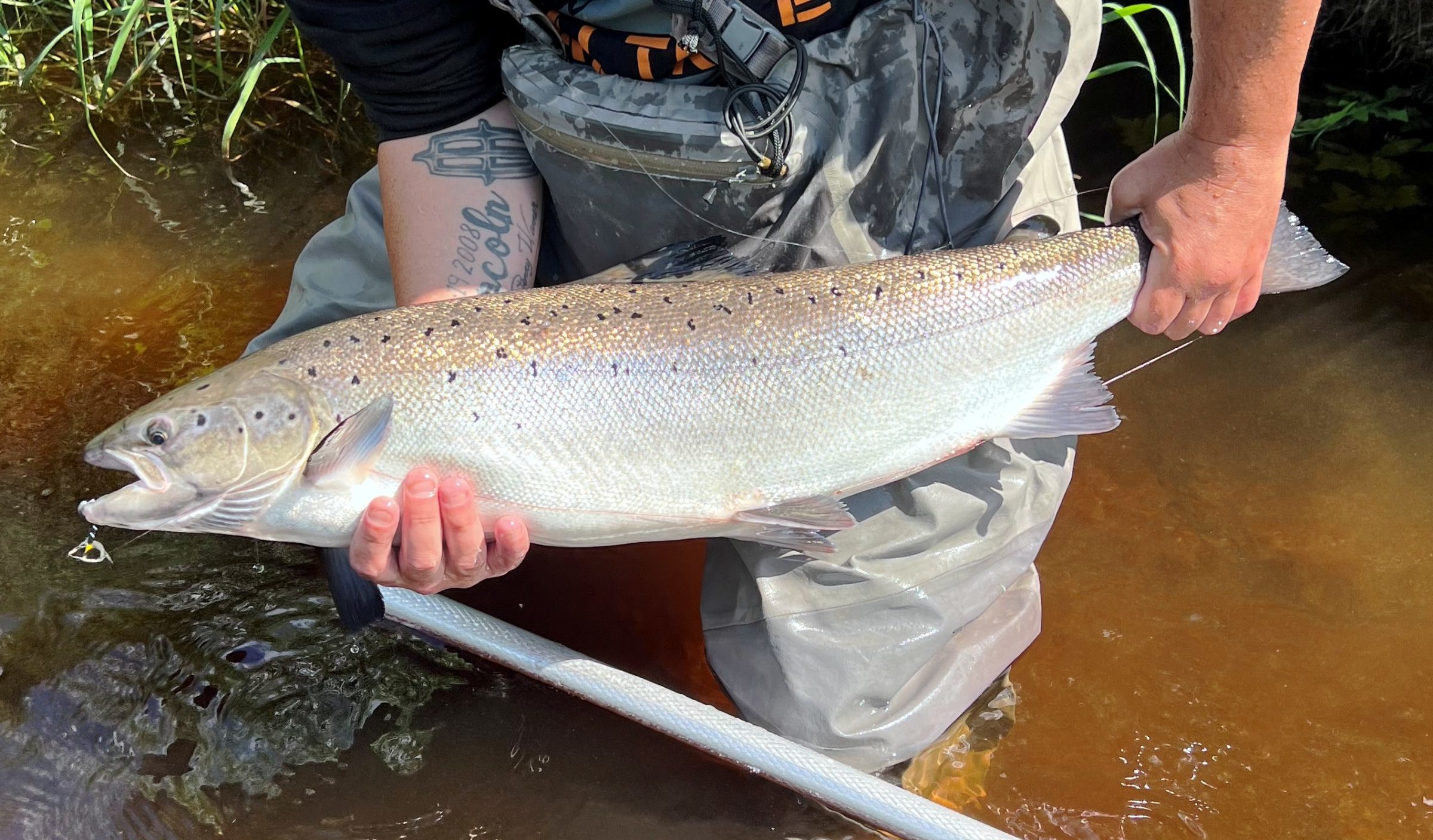 This is what we’re looking for, a chunky, bright Cains River salmon! The black ghost is still in its mouth. 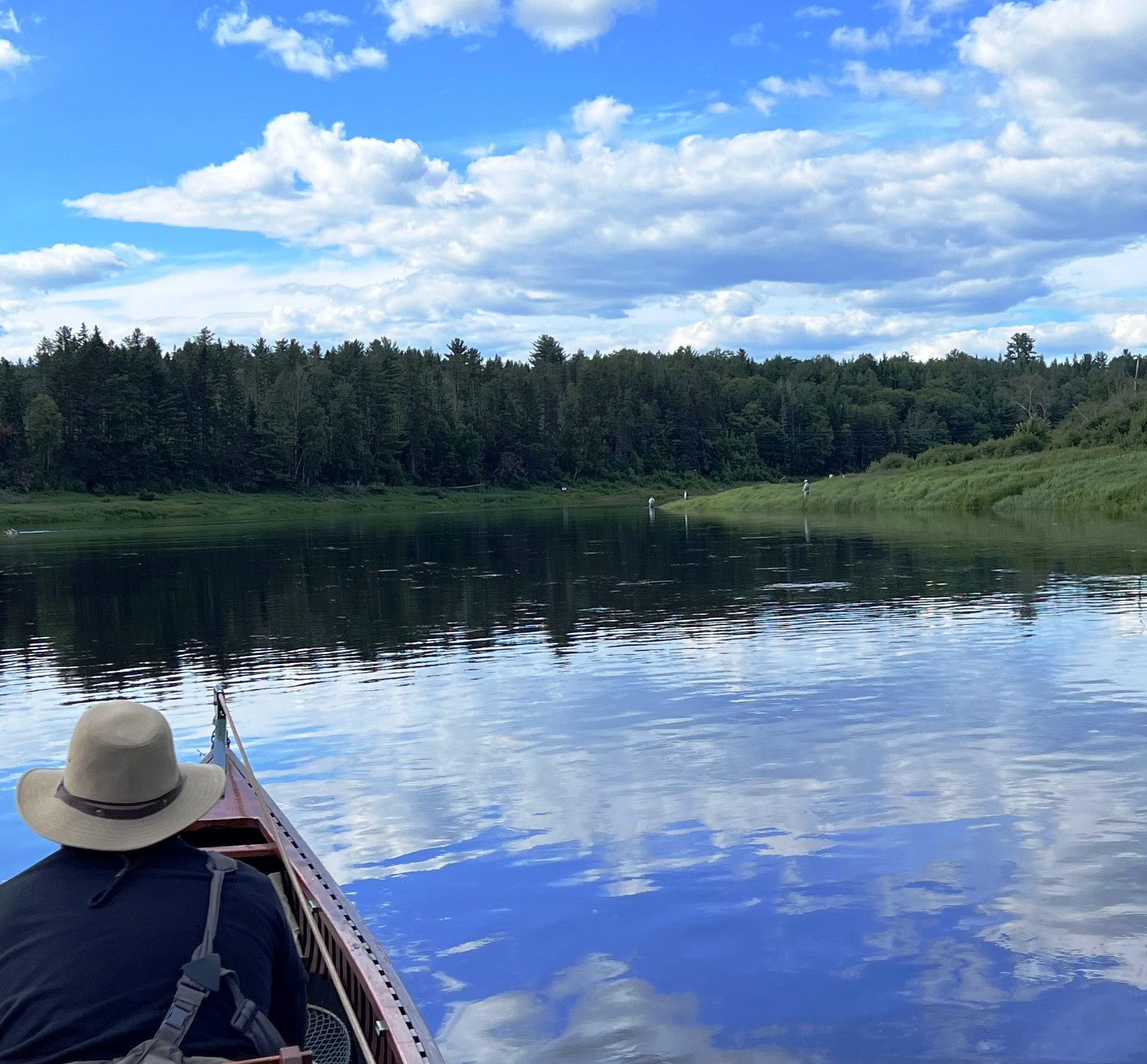 Headed out of the Cains by jet canoe we can see anglers from Black Brook working the shoreline of the confluence with the SW Miramichi – just as other fishers have done for at least 100 years.

Fishing Friends – I just returned from the Miramichi where I had arrived and begun fishing on the evening of June 10th.  That first evening the river was running at a high 1.6 meters on the Blackville gauge.  That is up enough so that wading off the grass bank is generally not possible.  The salmon then are traveling upstream along the edges, and you need to cover the travel lane – there generally is a preferred bank during strong flow – either from the shore or boat casting in towards the shoreline.  I briefly connected with two salmon that evening that took the fly hard at the end of the swing not 25 feet off the bank.  Since both were taken on a near dangle neither fish was well hooked.  This situation, to varying degrees would become the story of the early fishing this summer for most of us in the lower river, though in a couple of weeks there would be more fish, and at times there were somewhat better water levels.  We hooked and lost a couple more during that first week including one that came full length out of the water after Ralph Vitale’s fly, but it was the weekend of June 18th before we finally put one in the net, a beautiful hen fish with tiny head, chrome sides, and an indescribable electric blue colored back.  It was pouring rain, she refused to be held for a photo, and so we just let her go.  It was my first time fishing with Alex Mills, a NB lawyer who led the lobbying effort that ended salmon netting in the Miramichi.  We caught that fish in the rain part of a thunderstorm, the worst of which we sat out under a porch on Doctor’s Island as Alex talked about his years in the outfitting business as the proprietor of Old River Lodge in Blissfield. 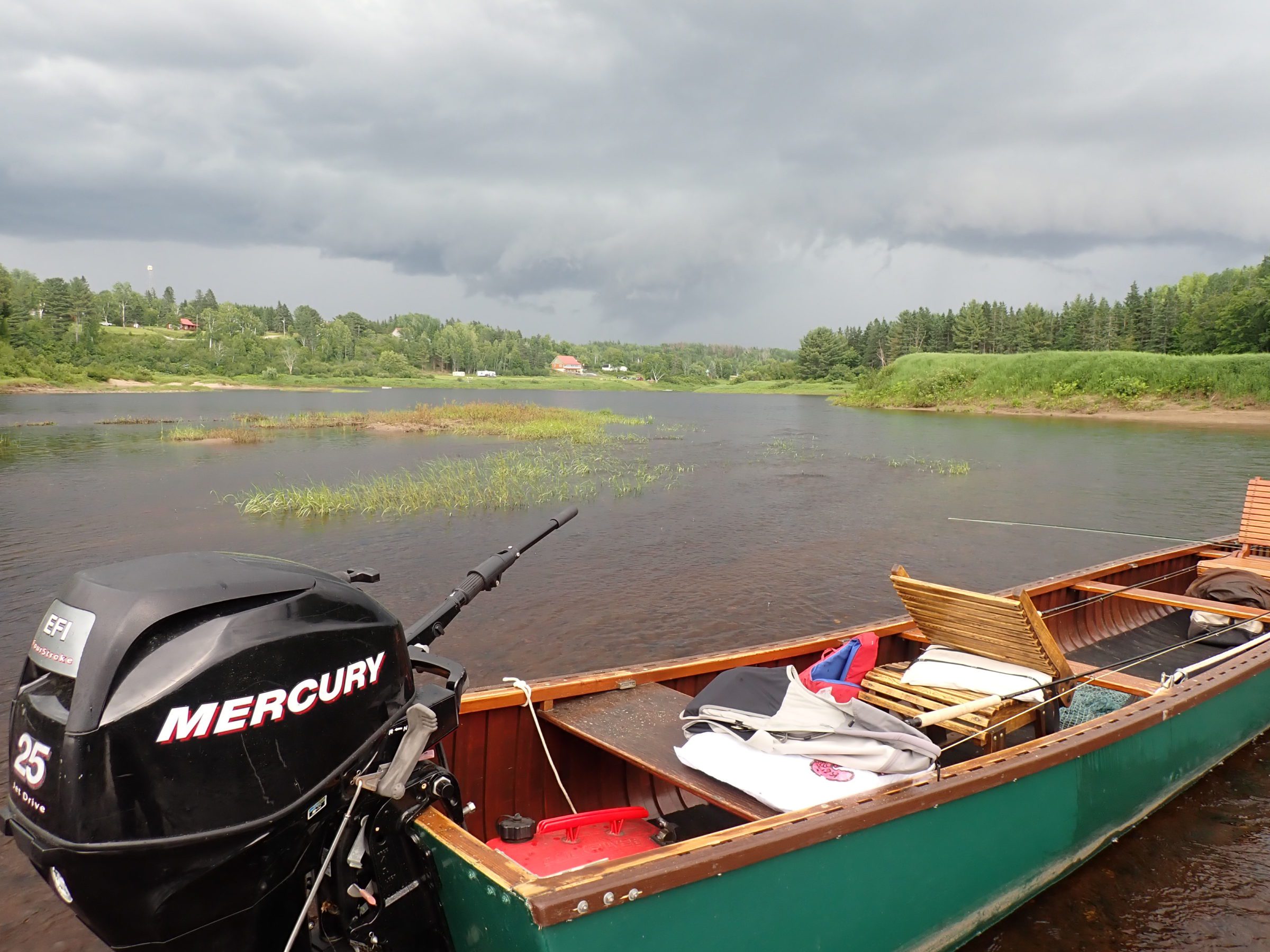 Looking upriver at approaching thunderstorms with Goose Island on the right and Doctor’s Island out of sight to the left.

That Sunday the 19th Jesse Robbins, the Sage rep who lives in Maine, came to the Miramichi with a group of his Spey-fishing buddies from his time steelheading on the West Coast.  We had a lunchtime barbeque at Campbell’s, and I listened to some excited stories of good fishing by them in some of Country Haven’s pools  in Upper Blackville.  They caught fish, and wowed everyone including the guides with their long casts.  I think we may have some new Atlantic salmon converts in the group.

Spey casting gurus enjoy a barbecue lunch before heading back to Upper Blackville pools for the evening fishing.

On June 22nd the Cassillis and Millerton trap numbers through June 15 were posted to the DFO website.  This is a very early indication of the run, but it is always better to have a good number than a bad one.  The Millerton salmon number in particular was quite good – more on this when we look at the June 30th numbers. 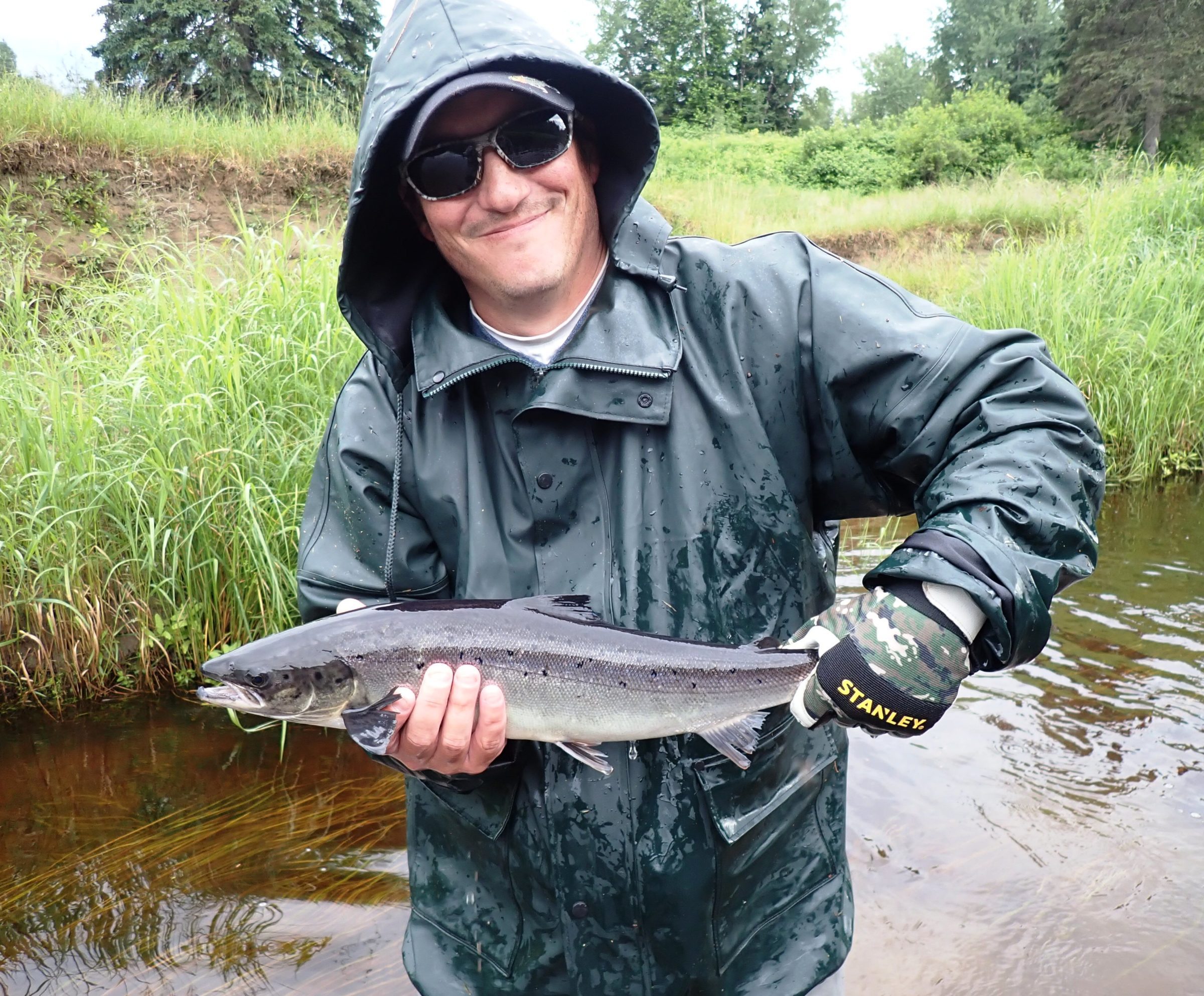 My notes from the trip show that around the 23rd and continuing for a few days there was a very evident run of salmon.  My god it was tough, though, to get a hook into these buggers.  My neighbors at Anderson’s Point have a great high-water spot where the salmon will often hold up for a while in the big dinge off the end of the point – even when they don’t seem to be doing so anywhere else around.  Two Keenan men have fished that point from their childhood nearly 70 years ago, and they are good at it.  They had regular targets of bright, rolling salmon, but only occasionally would one nip at a fly, and even less frequently get hooked.   Around now we also started to see the occasional grilse come flying out of the water.  There must have been a decent push of them as I hooked grilse every day for four or five days.

Two other hallmarks of this early going were that there were some very cold nights and even days.  We had water temps in the morning down in the mid 50sF off and on for a couple of weeks.  That is a good 10 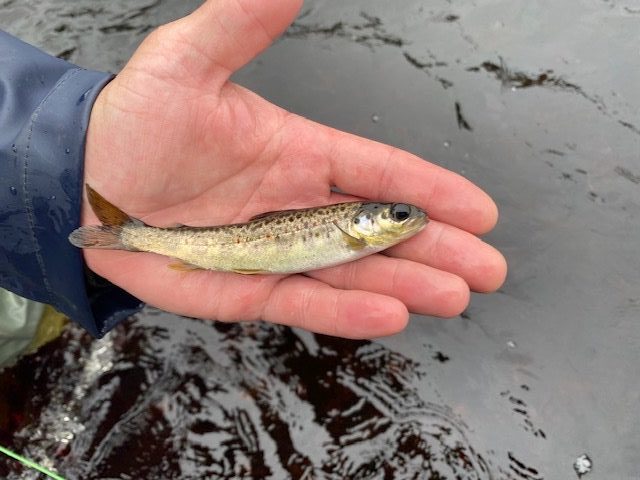 degrees colder than one would expect the last week in June.  The other was the amount of parr that we were seeing.  We normally do see a lot of parr in June in Blackville, but this year it seemed as if they were even more numerous than normal.  We had a hatch of some small mayflies one evening, and the density of parr feeding along the shoreline had to be seen to be appreciated.  They were literally so thick in places that the rises to the surface took on the look of boiling water.  I got an e-mail from a blog reader who was fishing for trout on the upper Cains, and said he was catching so many parr that it became frustrating.  Now if they could just make it by that equally ridiculous horde of stripers at the mouth of the river….

By the 4th of July the water was finally getting down to the more reasonable level of under .9 M on the Blackville gauge.  This is still too high to be ideal on most Miramichi salmon pools, but it is low enough to allow a lot of wading, and some lies do hold fish at this height.  Naturally a big front came through, and we got 40MM of rain at Clearwater, and the river came back up to 1.7 meters.  In an effort to find an alternative we went up the Cains which had mixed rainfall amounts at different measurement stations on the Fire Weather report.  Bantalor, because of its location in the headwaters, is easily the most important one.  They got less than an inch while it showed Meadow Brook at 4 inches – a number that I still don’t believe.  The Cains cleared up enough to fish almost overnight, although it did remain fairly high for days.  In spite of that height, we found a few fish, and on the 6th I had my best day of the trip netting two mid-teen sized salmon, losing another, and rolling a couple more.  The water was cold, and I was fishing a large #4 Black Ghost. 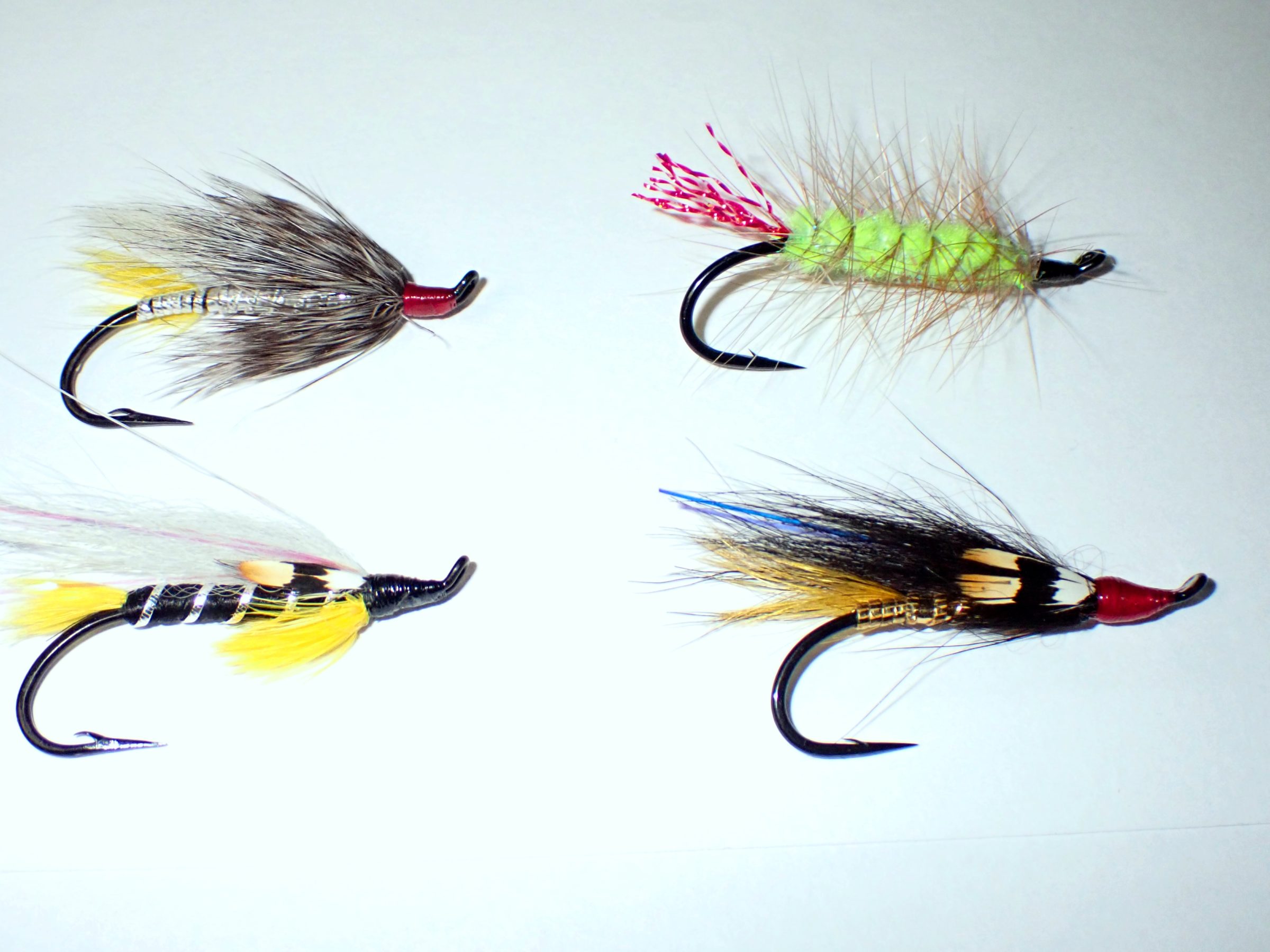 Cold, high-water conditions didn’t affect just the lower river.  Wayne O’Donnell reports from Rocky Brook that they started fishing with good results on June 27, but their water was also in the 50sF, and with that raise from the 40mm of rain the fish just moved on further up towards the headwaters and fishing quieted down.  “The brooks:” Rocky, Clearwater, Salmon and a number of smaller ones – all above Boiestown, represent important cold-water sanctuaries on the MSW Miramichi.  But without the warmer river water to need sanctuary from, they lose some of their special appeal.

On July 5th the DFO posted the June 30th salmon and grilse numbers from the traps.  Millerton registered 96 salmon – as opposed to grilse – and that was the highest total of any year since 2007 except for 2010 which had a handful more.  Using a historic estimate of 5% trap efficiency that means roughly 2,000 salmon had entered the Miramichi through June 30th. 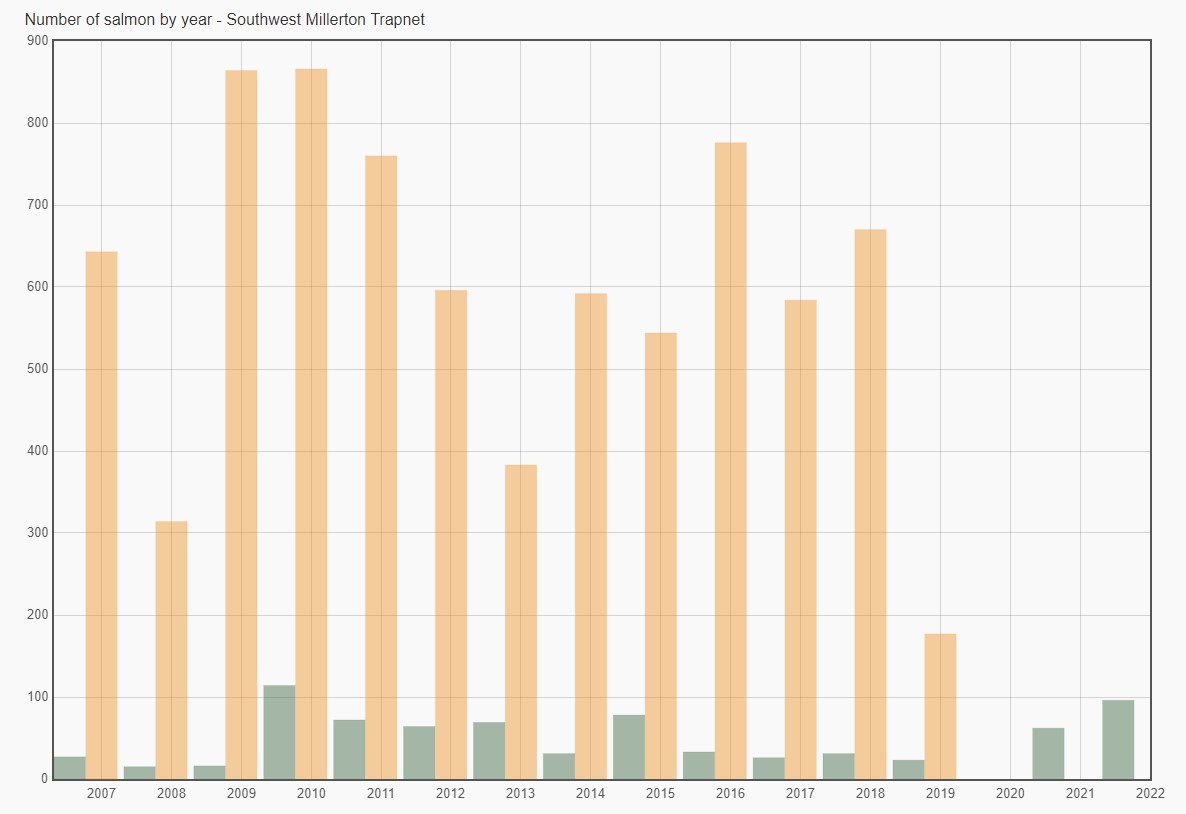 In the graph I’ve copied from their site the green columns are the count through June 30, and the beige columns are the full year counts.  The June 30 count is a very uplifting number even if catching these fish was on the difficult side.  Grilse numbers so far are lower than last year.  Today’s Dungarvon Barrier report showed the same thing with salmon up and grilse down somewhat for the year to date.  The same percentages – more or less – are also true of the NW Miramichi where salmon to date were above their historical average, but grilse are not.  Grilse numbers, however, are within their long-term averages, so we’ll just have to see how the rest of the season goes. 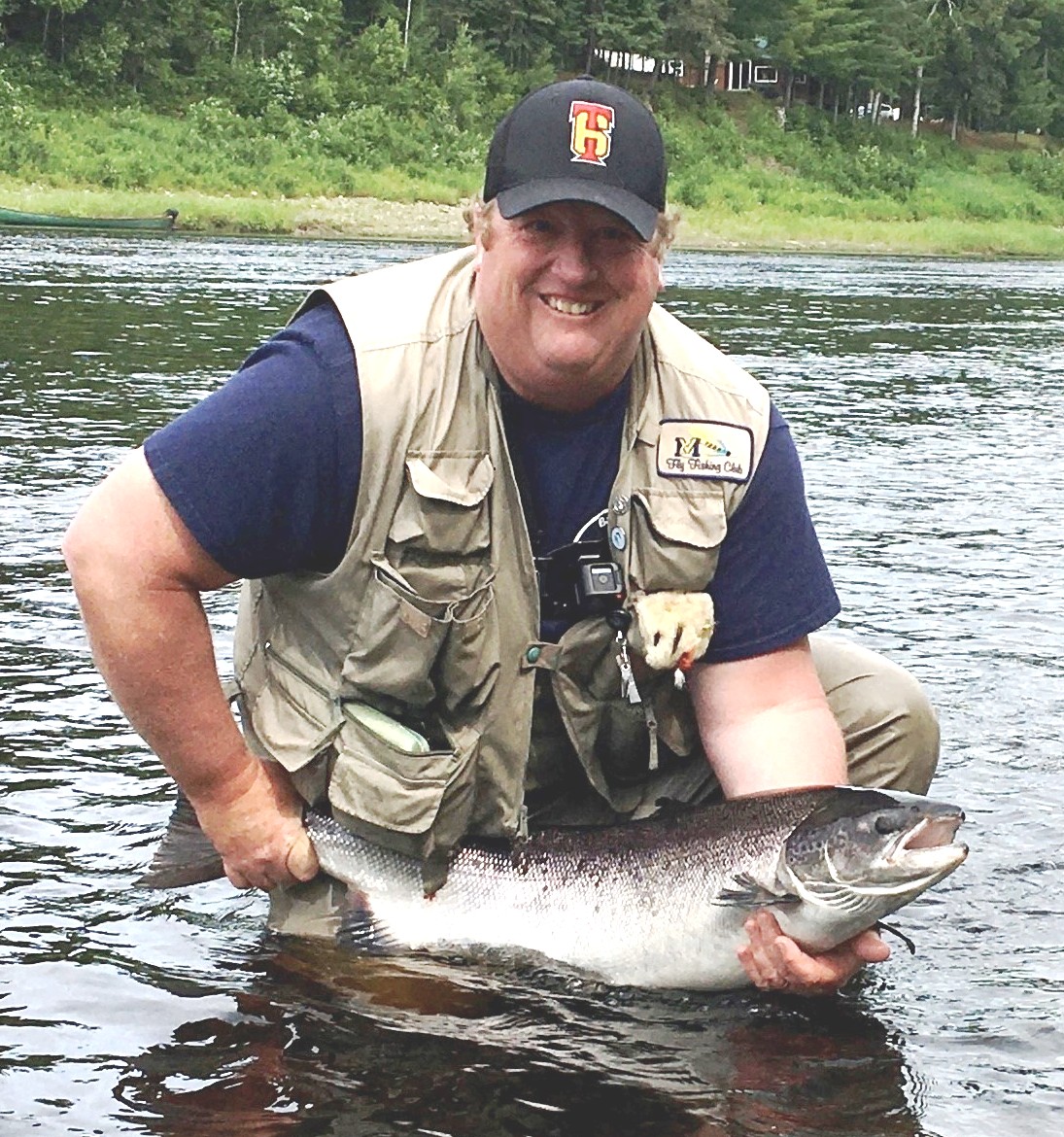 Big guy, and a big fish!

The increased numbers of salmon include some real specimens.  Innovative Green Machine tier Ashley Hallihan very recently landed this estimated mid-20s salmon from the MSW Miramichi in Blackville.  Ashley – who together with his students supplied the drone footage for On the Cains – caught the fish on one of his super-slimly trimmed, lime-colored machines with a butt of red crystal flash.

The New Brunswick weather for the foreseeable future predicts daily high temps to be right around the 26C/80F mark with lows slightly higher than long term averages.  No large rains are forecast, but of course all this can change.  The cold-water pools should now start to accumulate fish, and we will be into the normal summer routine.  It looks, though, like we have a good run on our hands this year, and that we will escape sustained overly warm temperatures that kill fish, at least into early August.  That is great news for our favorite fish.

Thanks to everyone who sends me photos and information, especially Byron Coughlan of Country Haven and Eddie Colford at Black Brook.  Thanks for reading!  Brad 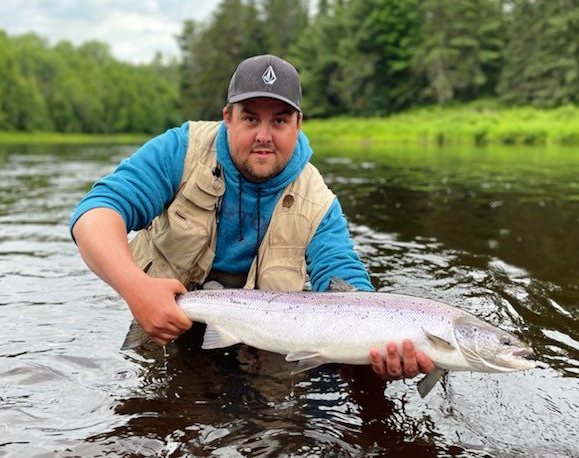 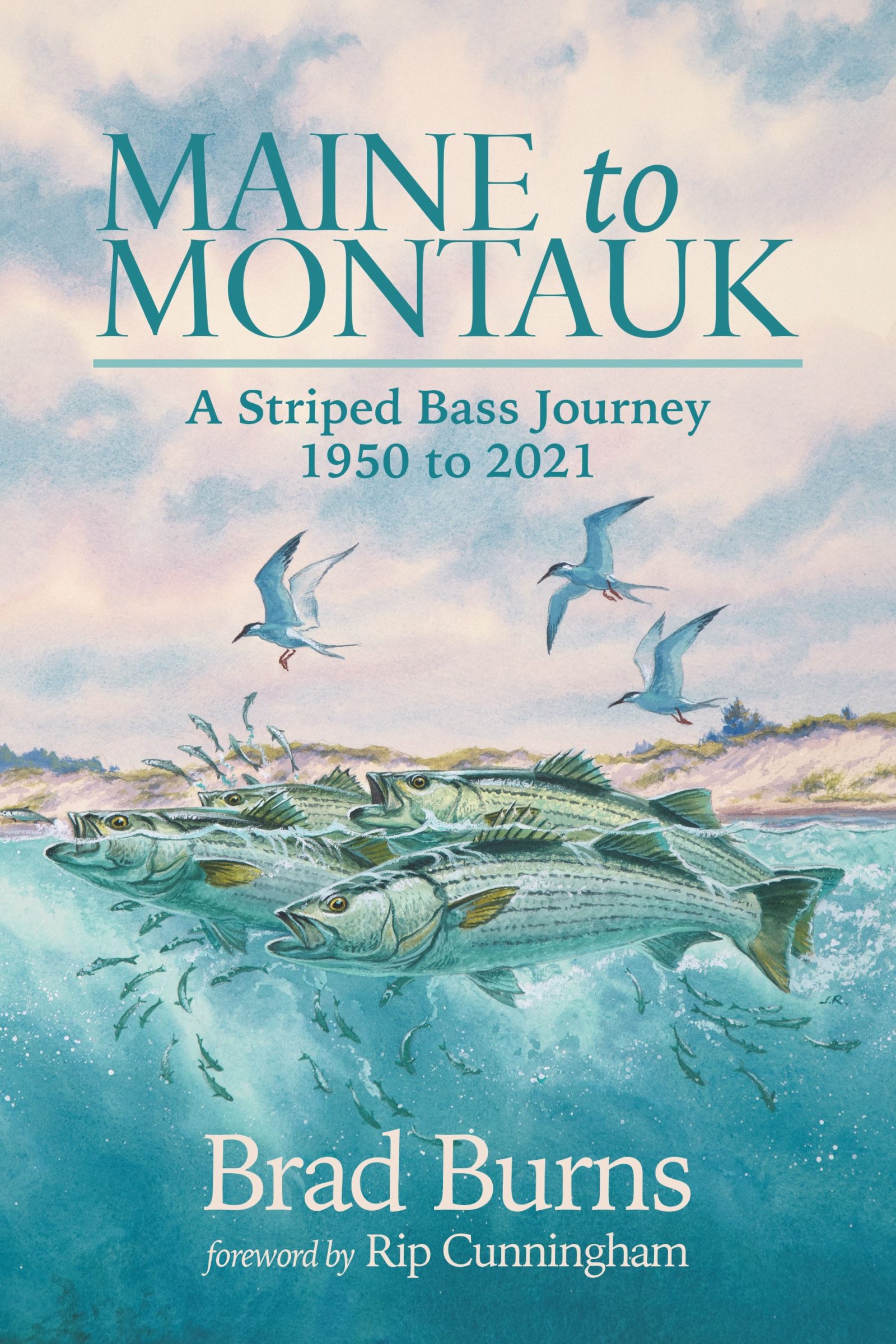 PS  I have just received 40 copies of the paperback version of Maine to Montauk from Amazon.  This is the first inventory of this book I have had.  There are no hard cover copies at this time.  Anyone who wants a signed copy can send me an e-mail with their order and send me a check when they receive it.  You could also use PayPal to bigbass@maine.rr.com.  Price is in American currency, $30 with shipping included in the US, and $45 in Canada.  I’m very sorry about the extra $15 charge, but even with it I will still be subsidizing the shipping to CA.

Before you start questioning my sanity or allegiance, let me explain that previous to being introduced to the Miramichi striped bass were my fish.  This book is based around my life fishing for the striped bass population of the East Coast of the USA.

Maine to Montauk was the #1 Best-selling new fishing book release for a period of time earlier in the spring, and is still selling well.  The foreword is by the former publisher of Saltwater Sportsman Magazine, and Black Brook Salmon Club senior member Rip Cunningham – a man who knows more than a thing or two about striped bass.  If you look the book up on Amazon there is a long preview there to give you a flavor of the book.

“Maine to Montauk is the story of the evolution of an angler (and man) and the highs and lows of an enigmatic-yet-wholly captivating fishery.  Filled with fascinating characters and intriguingly fishy settings, this book is an absolute must for anyone who loves fishing for striped bass.”
Monte Burke – author of Lords of the Fly and Saban
“Few folks have fished as hard for striped bass as they have fought to conserve them. Equal parts diehard angler and devoted conservationist, Brad Burns has put these experiences on paper for the rest of us. It’s all here, from eel-skin plugs to the Eel Skin Inn. Meet the heroes of the sport, land a sixty pounder (or two),  witness the rise (and fall) of the striper population, and share one man’s passion for the fish that unites us all.”
David DiBenedetto – author of On the Run: An Angler’s Journey Down the Striper Coast 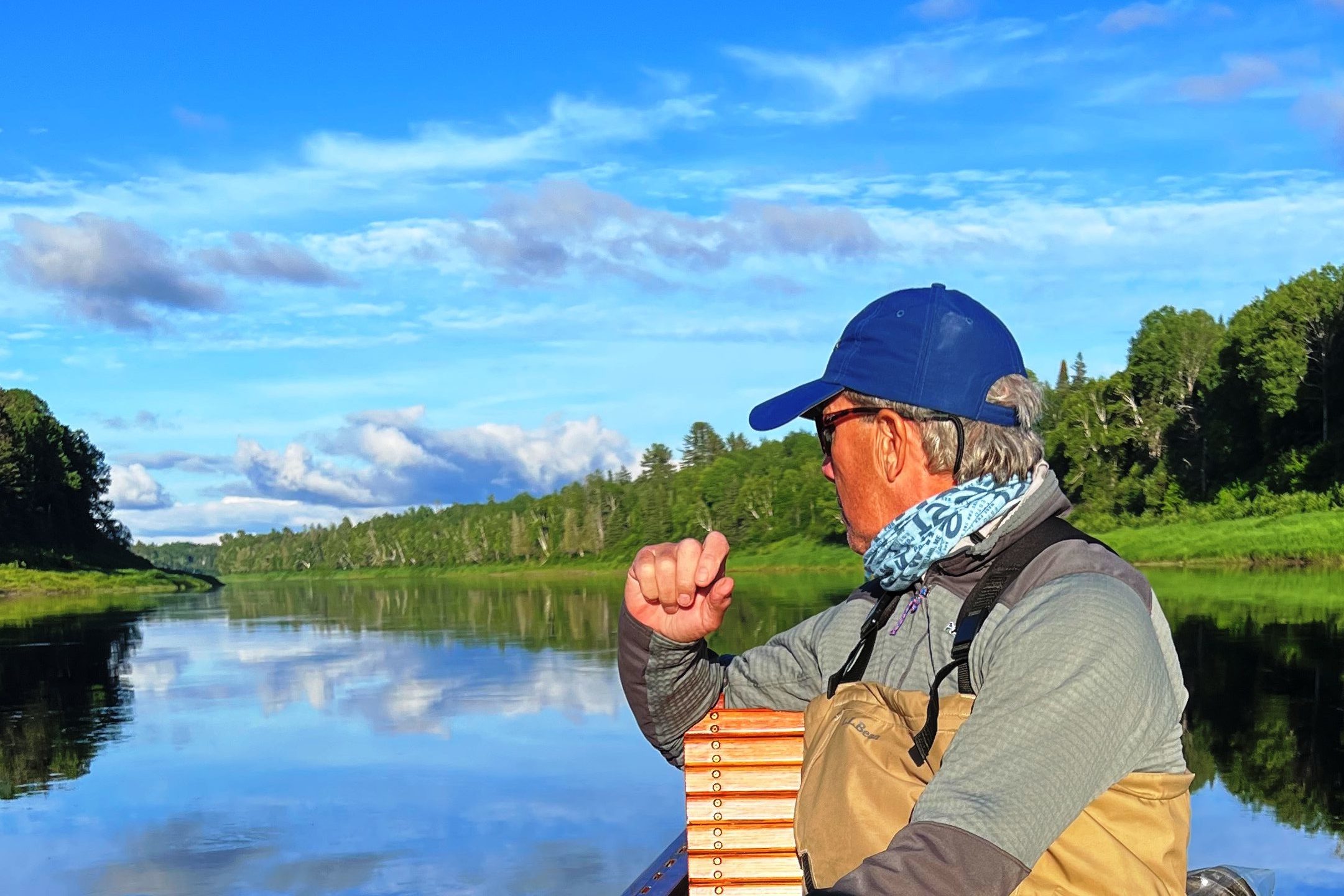