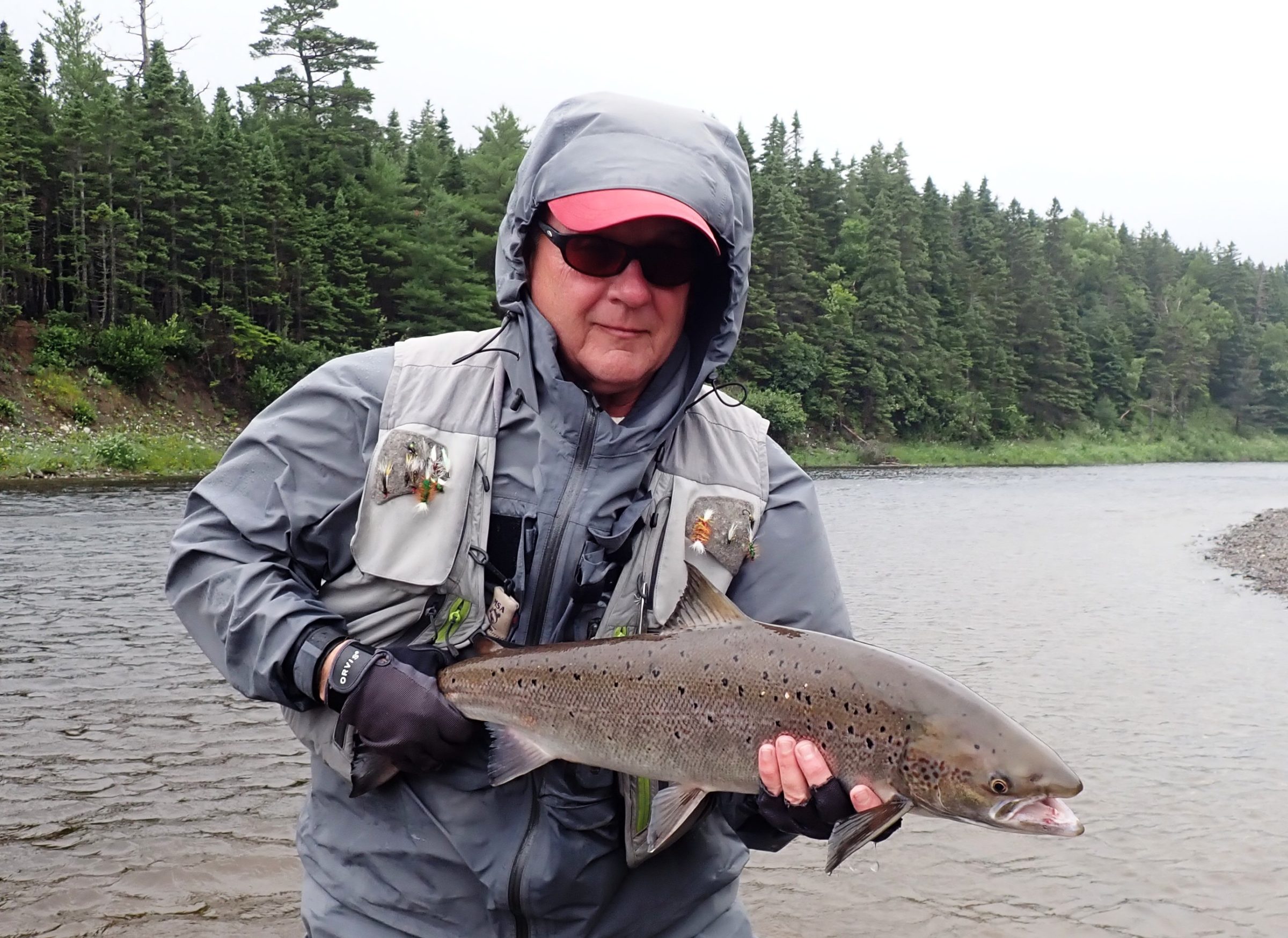 Mid-teen salmon caught by the author amidst wind and rain on the Serpentine River, Nfld.

Fishing Friends – I’ve got a number of items from the Atlantic salmon world to let you know about in this blog post.  First, I returned yesterday from a trip to the Serpentine River in Newfoundland, and I’ll fill you in on how that went.  Second, I have recent reports from several lodges on the Miramichi as well a look at the latest salmon and grilse numbers from the traps.  They’re quite good, especially regarding salmon. 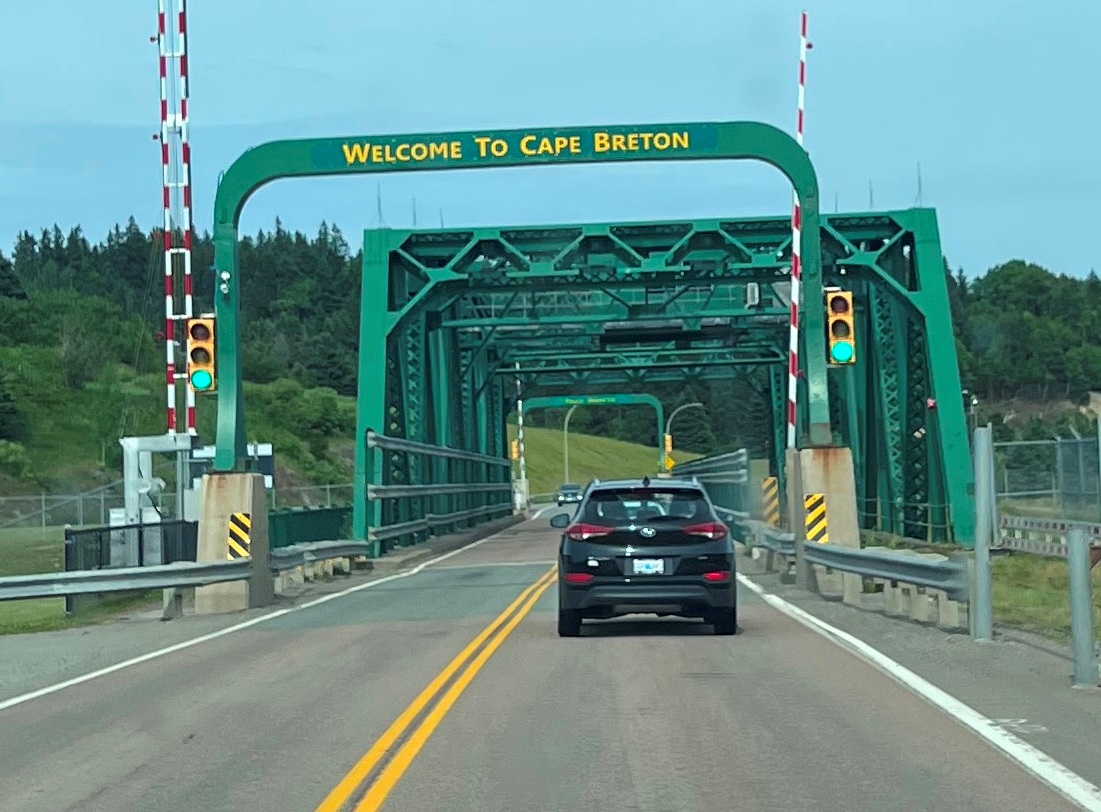 Crossing the Canso Causeway on the road to the Nfld ferry.

This was my third trip with Newfound Outfitters to Newfoundland’s Serpentine River.  I fished with New Brunswicker Dawson Hovey, a couple of his old friends, and some new acquaintances including Cam Thompson, the retired head of sales for Pure Fishing, the company that owns many well-known brands including Hardy.  We missed a couple of years on the Serpentine due to Covid, and in the time between my first trip and this one my original guide Paul Rogers became the owner of Newfound Outfitters.  Paul is a very experienced Humber River salmon angler – home to Newfoundland’s biggest salmon – and he brings the rare combination of experience and youth to this undertaking. 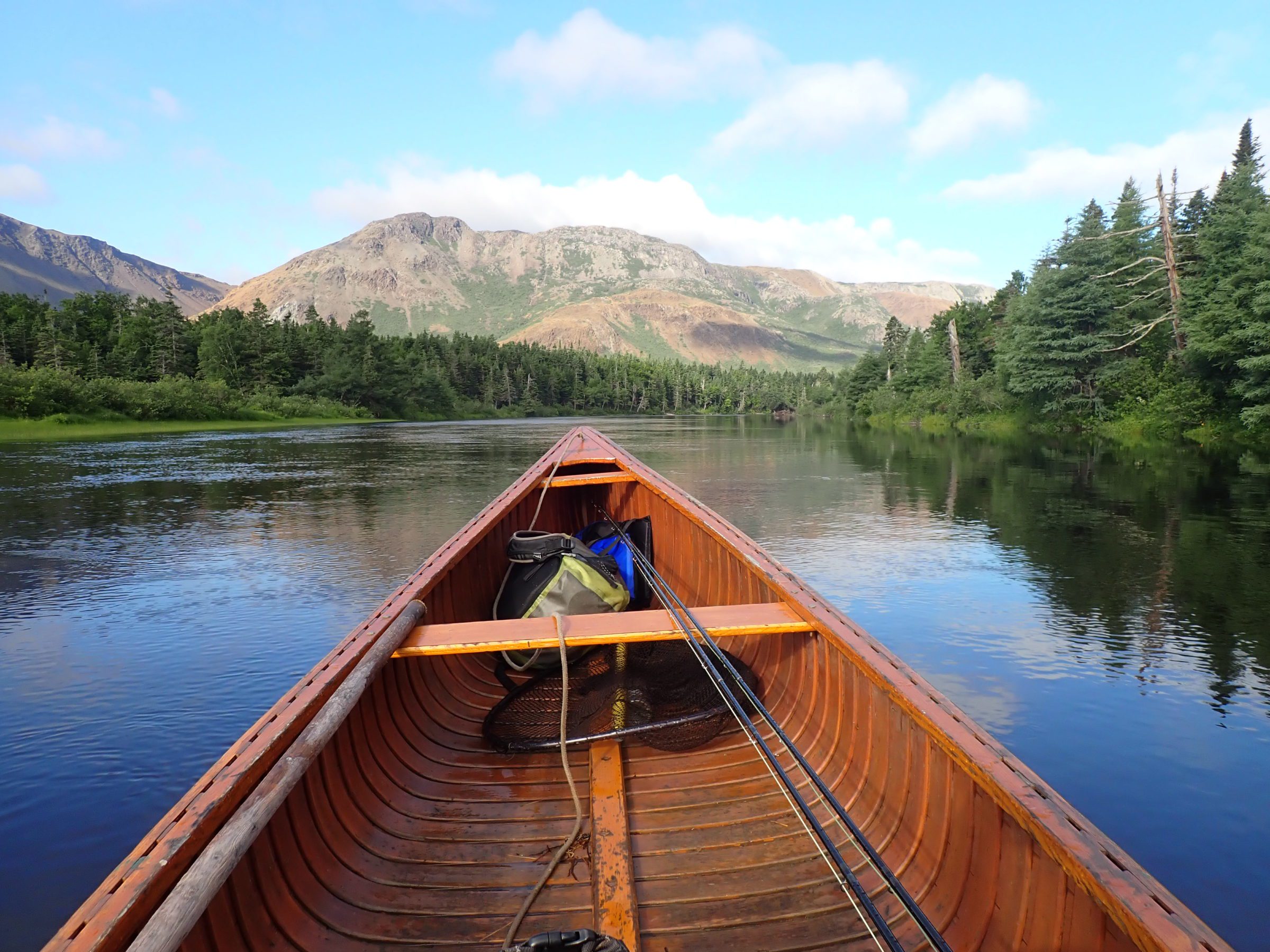 The Serpentine is rimmed by the Blow Me Downs on one side and Lewis Hills on the other. The scenery is spectacular.

The Serpentine begins in a large and very deep lake just southwest of Corner Brook, and twists and turns its way to the sea some 15 miles distant.  The lodge’s four-wheel drives bring you in a rugged dirt road to the lake, and from there you access the lodge via long, Gaspe style canoes.  Later you get to your beat on the river by these same canoes.  Once there the fishing is almost exclusively wading, and for the most part the bottom is gravel, and relatively easy. 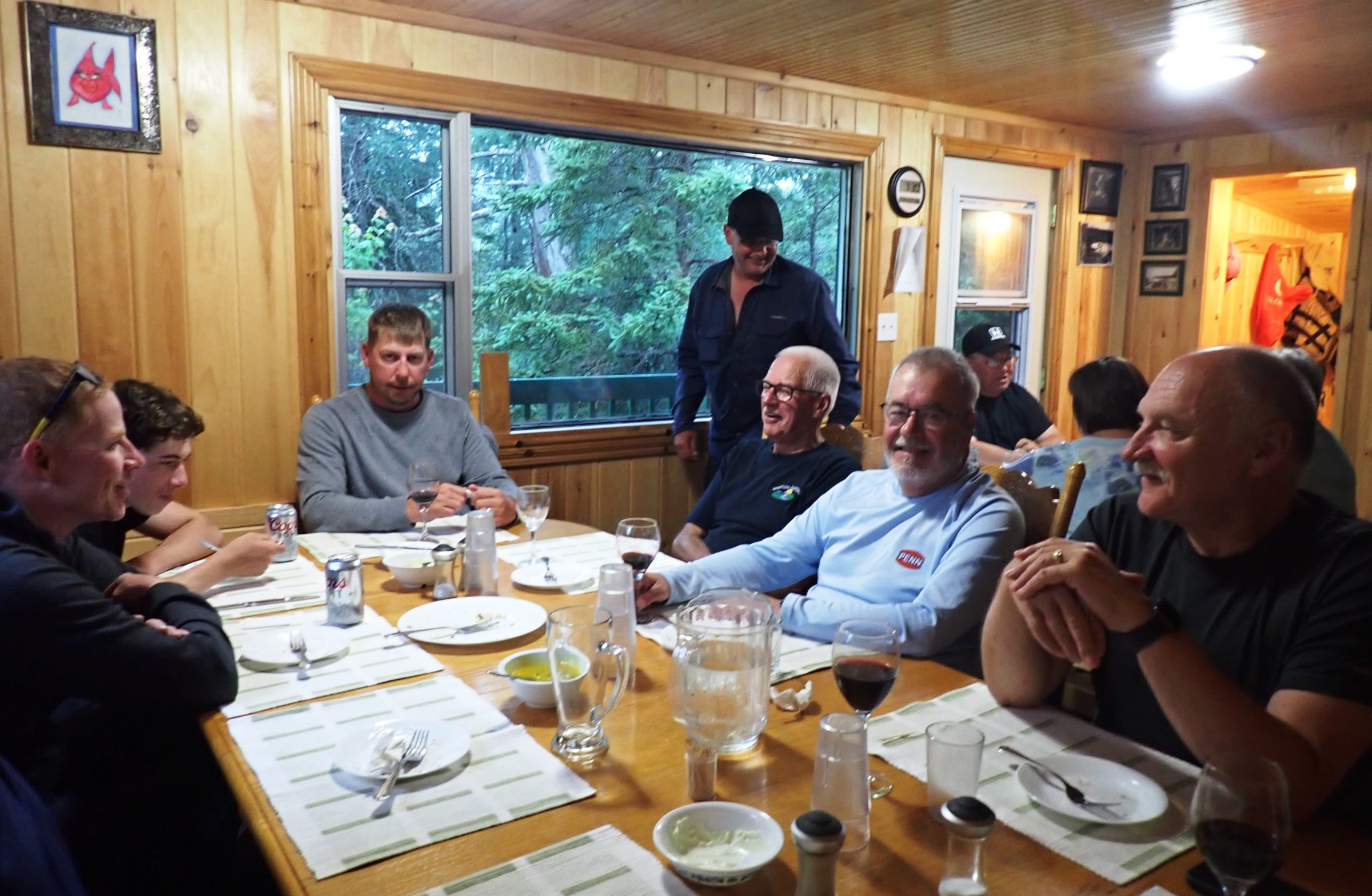 Dinner, back at the lodge. 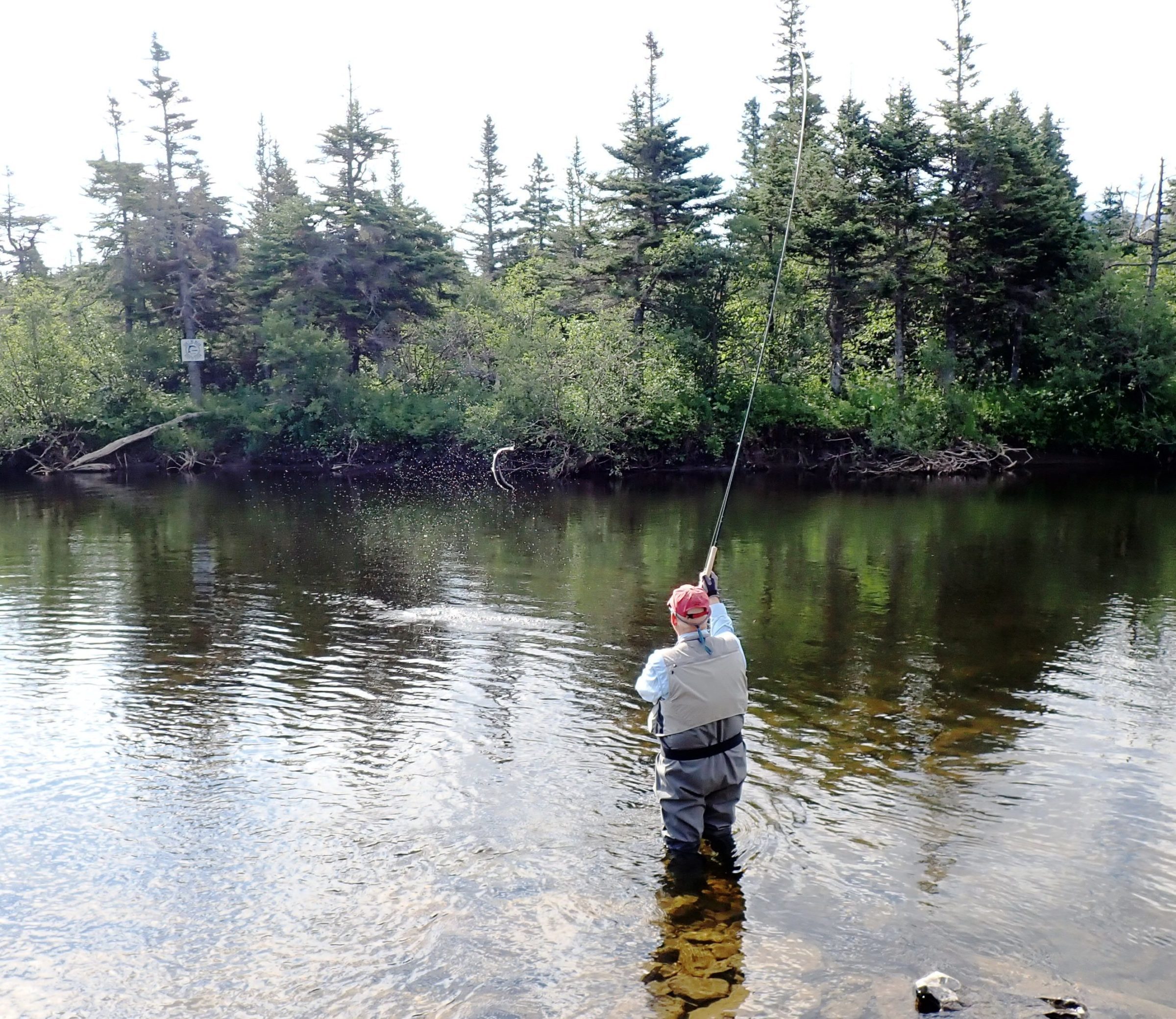 Holding onto the jumpers has a large element of luck. The Spey rod helps.

I got a report from Paul that fishing had been very good in early July as the lodge opened with lots of water and wet weather continued.  This is very much like what we have seen so far on the Miramichi.  But we arrived to find the river starting to get a tiny bit lowish, and that a lot of fish had moved up to the lake.  There were still plenty holding in various pools throughout the area that the lodge fishes.  It rained for the next two days, though, and the river came up and became somewhat colored.  This shuffled the deck and changed the quantities and locations of the holding fish.  The guides knew the river well, and we were over fish virtually all the time.  I ended up putting 3 salmon and 5 grilse in the net for 4 ½ days of fishing, but due to barbless hooks, and I think poorly hooking some moving fish, I had at least that many others on the line for some time before getting off, not to mention many other rolls and bumps that kept things interesting. 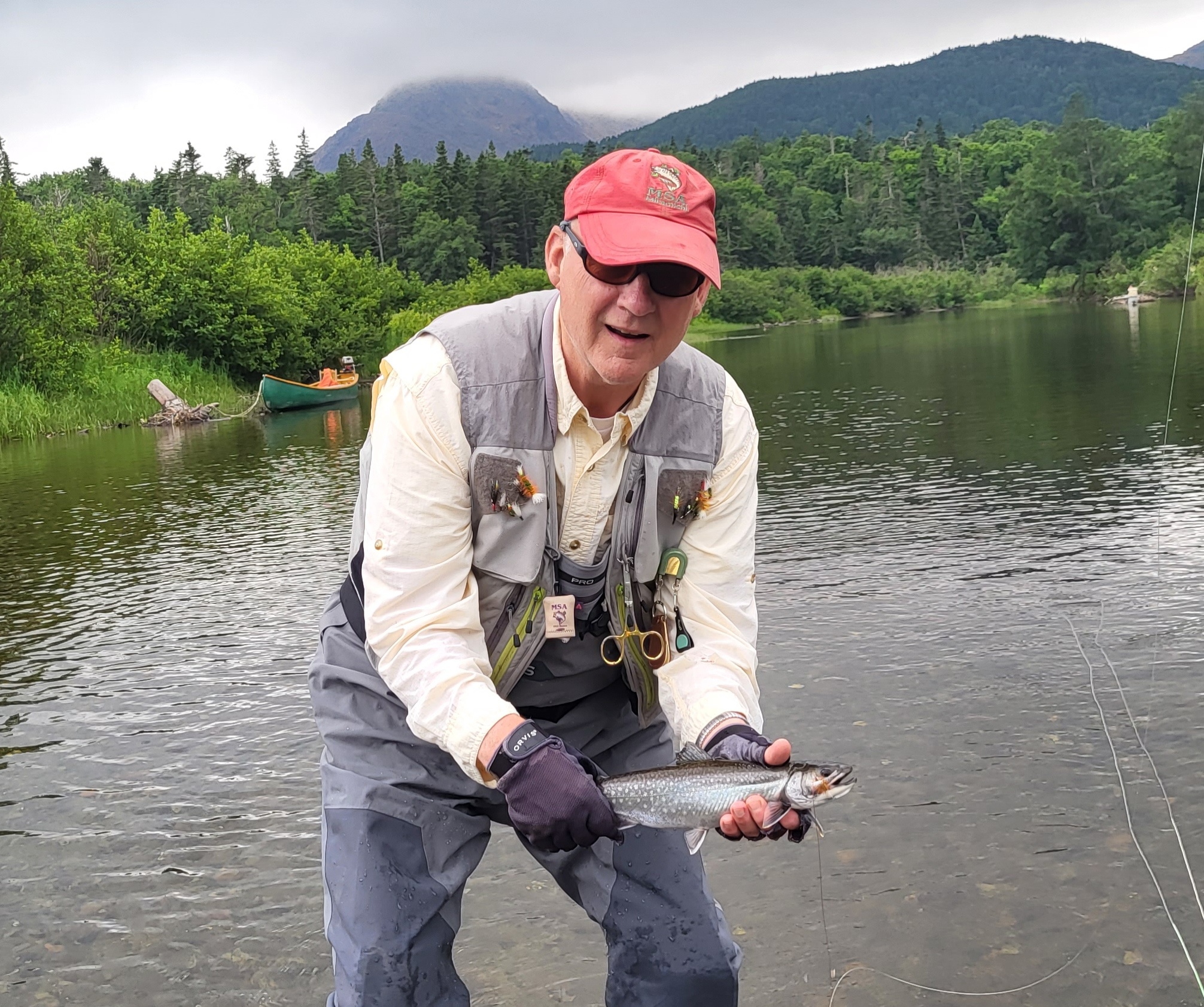 Sea run brookies like this are numerous on the Serpentine and often caught while salmon fishing.  They get much bigger too.

The Serpentine salmon came to a variety of both dry and wet flies, mostly in #6 and #8, which are smaller sizes than I am used to using on early season water.  The bombers used are also smaller than most of our Miramichi dry flies.

An added bonus of the Serpentine is the large amount of sea run brooktrout that are present.  There are lots of pound to pound and a half silver beauties, but liberally sprinkled in are trout up to 3 pounds or so, and a number 5 pounds and larger are evident.  I saw one as we drifted over it that I know would have to lose quite a bit of wait to weigh 5 pounds. 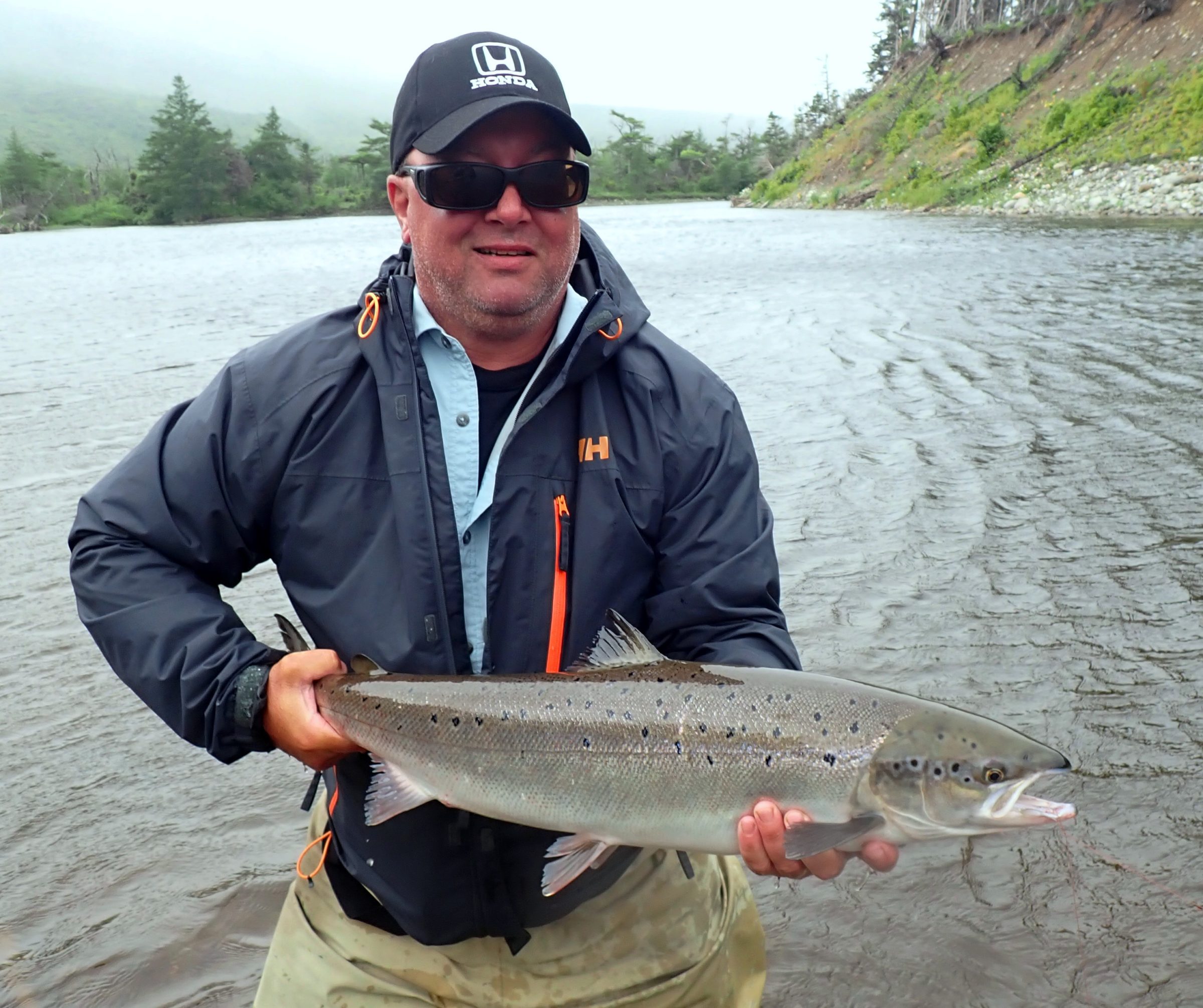 Rick, one of Newfound’s guides holds another chunky, bright salmon.

I have often joked that I am planning to spend my next lifetime in Newfoundland.  The scenery, cool air, and room around you because of the island’s sparse population – roughly two thirds of New Brunswick’s population and twice its land mass – make Newfoundland especially attractive to lovers of the wild outdoors.  Flying isn’t easy or inexpensive these days, but most people do get to the Serpentine by plane.  I prefer to drive, partly because I just like the scenery of the drive, and the adventure of the ferry crossing between Cape Breton and Port au Basques. I also appreciate having all my equipment packed securely in my vehicle, which makes me a little less dependent on outside forces. 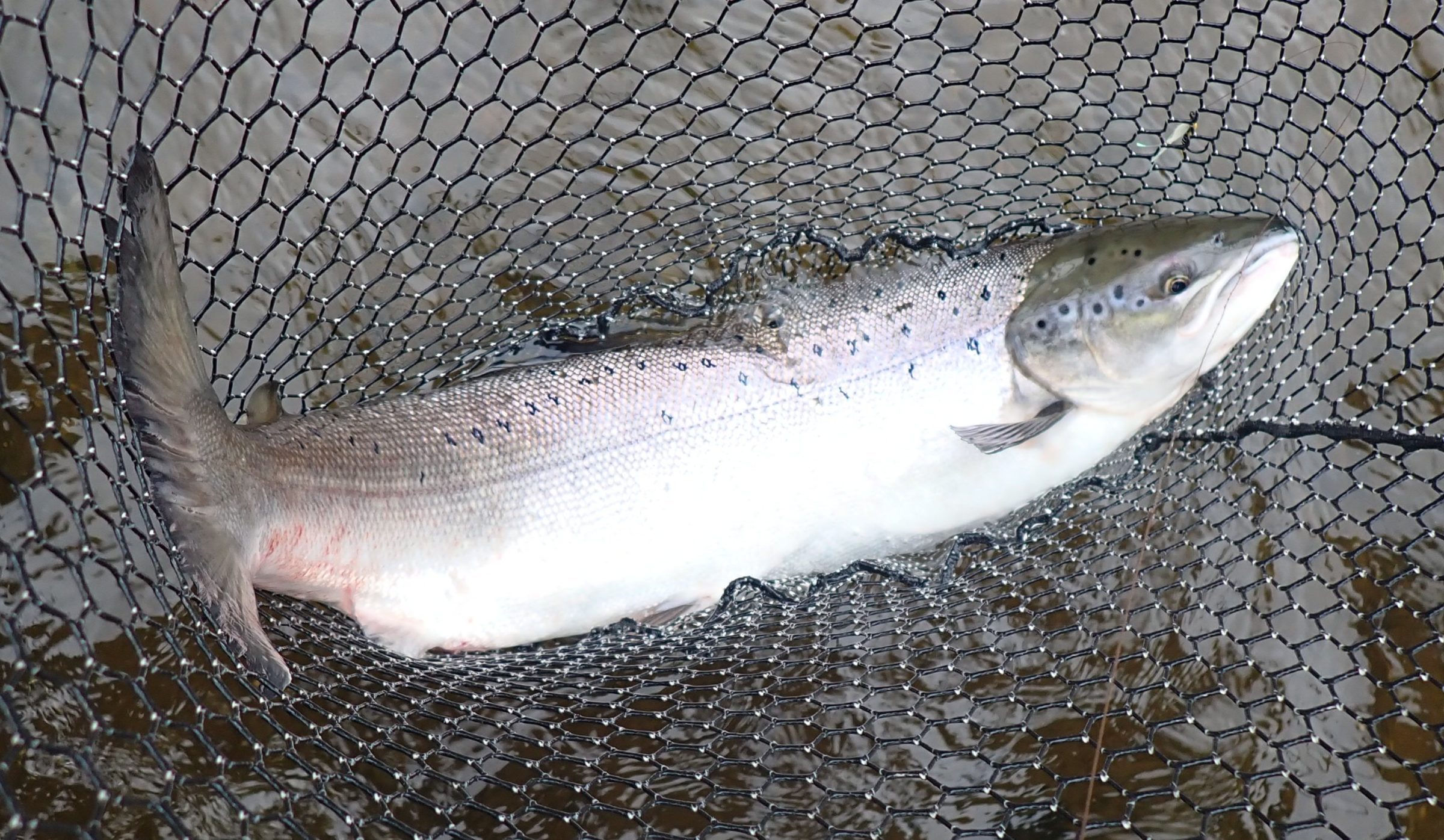 I receive no discounts, and no commissions from anyone who might want to go to Newfound Outfitters, but I do know that there are openings from time to time including a couple from last minute cancelations that are coming right up. If you have any interest, I can also tell you that this is a very easy trip to arrange on a short-term basis.  The Serpentine offers one of the best bangs for your buck in the salmon world.  The lodge is clean and comfortable, food is good, and the staff is friendly and knowledgeable.  Here is a link if you want to check it out.

Conditions on the Miramichi, as they do every summer, have become very difficult due to warm weather.  As I write this the current water temperature at Trout Brook on the NW Miramichi – the only automatic temperature site on the system that I know of that is currently available – is showing 25.5C/78F.  It has been up or down a bit from there for the last several days, and that is simply way too warm for salmon fishing.  I expect that tomorrow DFO will close all the cold-water pools to salmon fishing.  The heat scheduled to persist through Monday when there will be an easing back to more normal levels.  Air temperatures of near normal are expected for the next two weeks – which won’t materially cool things down very quickly – and so I expect it will be at least into the second week of August before we get back to any salmon fishing on the Miramichi. 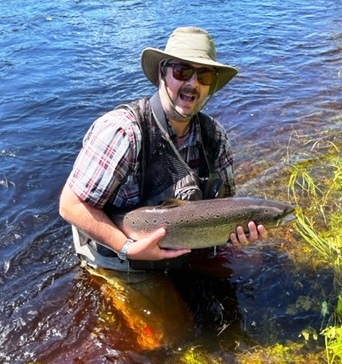 Dr. Jake Swan with a Cains River beauty released in July above Shinnickburn in high water.

Eddie Colford of Black Brook said that they had lots of fish holding in their water, but that it was too warm, and catches were slow.  They have the best warm water buffering that I know of on the lower river.  I also spoke with Wayne O’Donnell of Rocky Brook.  He said that they had plenty of fish in their pools and that catches, and water temps were very good.  That was a couple of days ago.  It is cooler where they are up in the foothills, but still, I expect that they are now also suffering with warm water.

The word for the early season in retrospect was high water.  It brought about some unusual happenings.  One of those has been some unexpected catches much further up the Cains than normal.  Byron Coughlan of 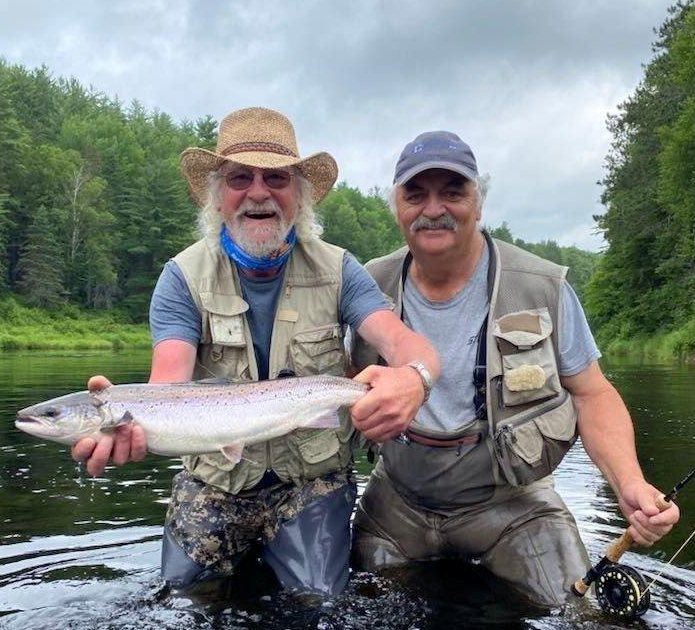 Country Haven sent anglers up to try a pool above Shinnickburn, and they landed five!  Dr. Jake Swan of Fredericton was also fishing a pool in the same area and landed the thick beauty in the picture.  He also hooked several others.  It isn’t completely unprecedented for these catches to appear 15 miles up the Cains in July, but it is definitely unusual.  The reason is evident in the Swan photo – high water.  This is all well and good as long as we haven’t given up too much of our fall run already.  Hopefully that isn’t the case.

Through July 15 the Millerton trap reported catching 222 salmon and 405 grilse.  I’ve added the graphs below showing both these statistics back to 2007 – salmon first, grilse below.  The green columns are through July 15 while the beige columns show how things ended up for the year.  While exactly how 2022 will end up can’t be predicted, you can look at other years and see that in previous years a salmon number like 222 should indicate strong returns for the season.  The salmon run so far this year is better than 10 of the last 15 years, and the grilse number, while less than 2021, is also still in the top third of the last 15 years.  The NW Miramichi numbers show the same trend but aren’t quite as good, relatively speaking to prior years, as the SW Miramichi. 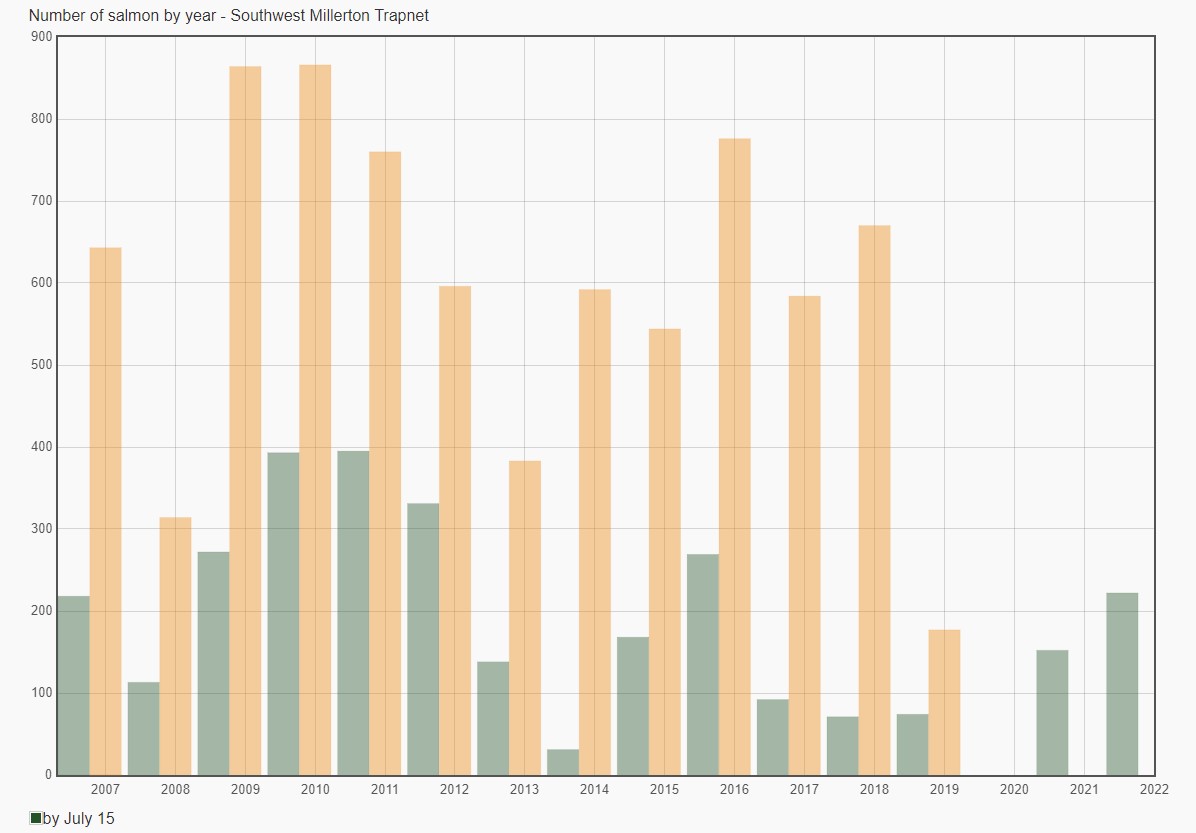 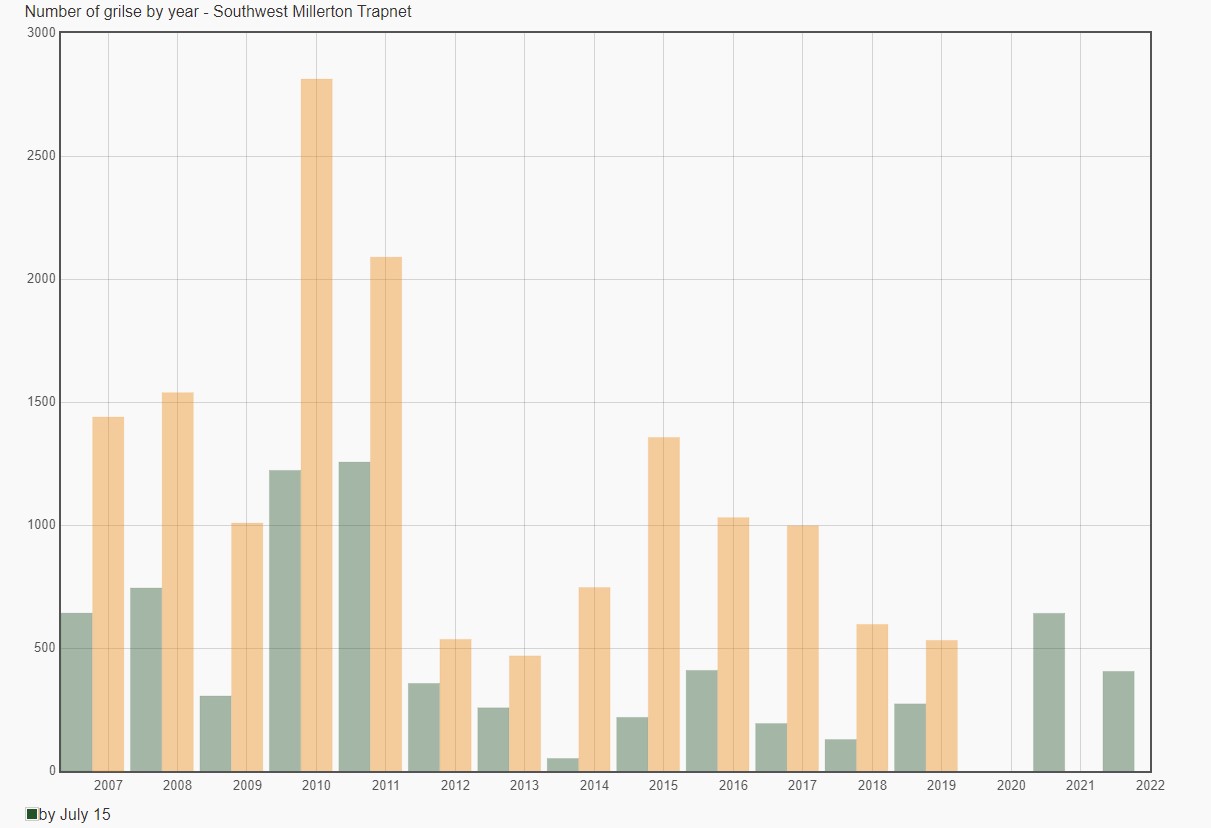 The warm water will definitely bring out more poaching.  There is no sense in complaining about this activity.  The people who engage in it would just laugh.  Having them get caught and prosecuted is the only course of action to take.  If you are out and around and see or hear of poaching activity, either netting or snagging, here are the numbers to call:

Connect to a DFO Conservation and Protection Officer at

Please save these to your phone and don’t hesitate to use them.

I have these words from Robyn McCallum president of the Miramichi Salmon Assoc:                                 “The MSA team continues to restore and maintain cold water pools, conduct electrofishing for juvenile assessment, advocate against invasive aquatic species, etc. Water levels are higher than this same time last year. Warm water protocol meetings occur regularly, and if the water temps meet the threshold, the protocol will be activated. We love seeing plenty of anglers enjoying the Miramichi! Our salmon protection barrier teams are doing a great job collecting data. We continue to assess habitat for potential beaver dam management sites this fall. Our Brian Moore Legacy Fund student Ellie Smallwood recently released a new video- it is available on our YouTube and other social media channels. The MSA recently hosted a director’s day- although it poured rain, we were pleased to welcome directors to our South Esk facility and show a bit more of what we do, thanks to our supporters.” 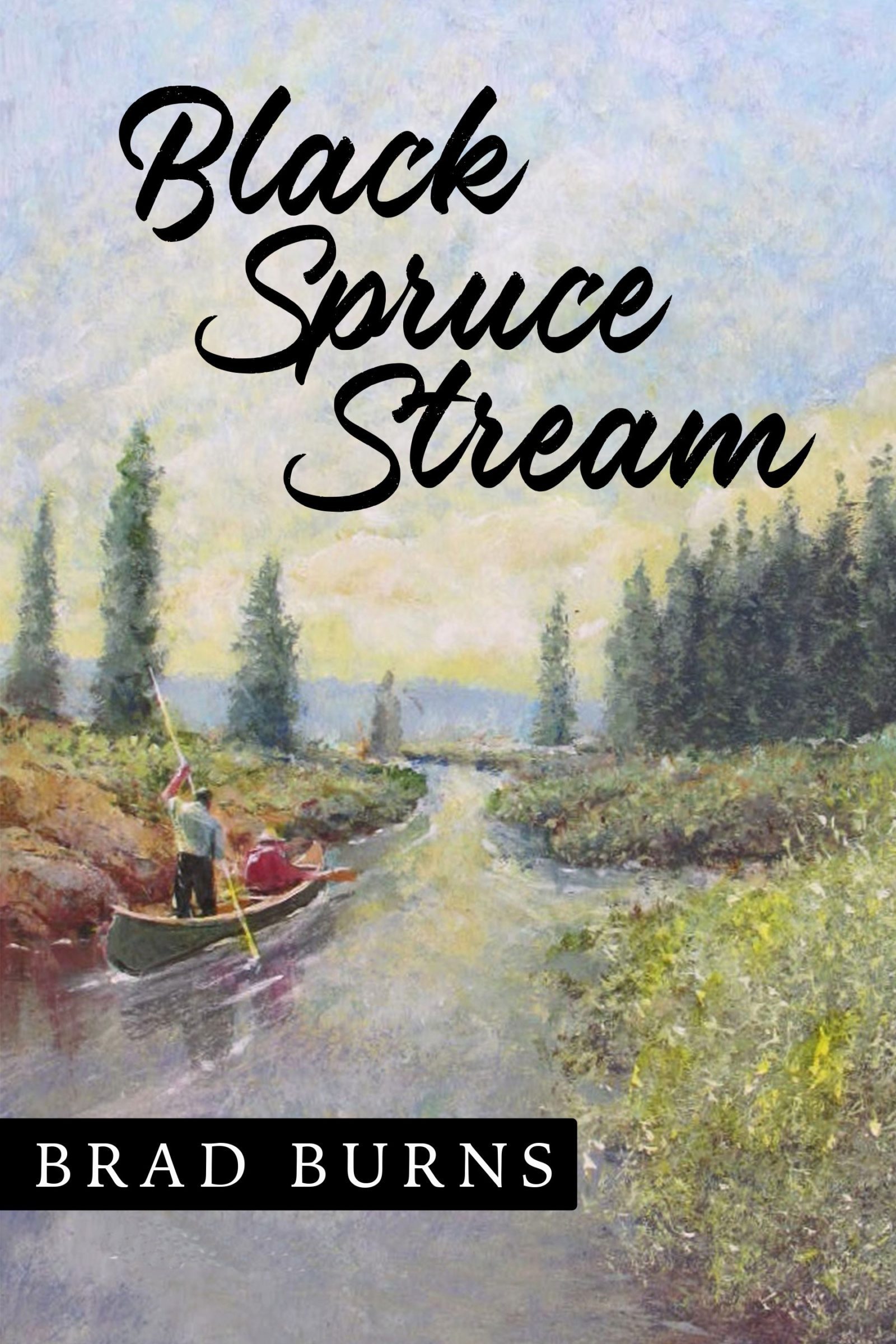 Black Spruce Stream is a small novel, set on the rural coast of Maine, that I wrote and offered as an e-book for $.99 on Amazon as part of the marketing introduction for Maine to Montauk.  Now a printed copy is available from Amazon at this link for $7.99.  Check it out.  You’ll see lots of good reviews.  If you like sea run brook trout, the coast of Maine, and have a little sentimental side I think you’ll really like Black Spruce Stream.  Other good reasons to buy it are the front and back covers, two terrific color images created for the book by artist Luther Hall.

In the last blog I offered some copies of Maine to Montauk for $29.95 delivered and signed.  Maine to Montauk was the top new release in fishing books when it came out in March.  Just send me an e-mail at bigbass@maine.rr.com, tell me where to send the book and who to sign it to, then send me a check after they arrive.  You could also use Paypal.

If a friend sent you the link to this blog, you can sign up at no charge on my website to get your own notifications when a new one is written.  Here is the link. 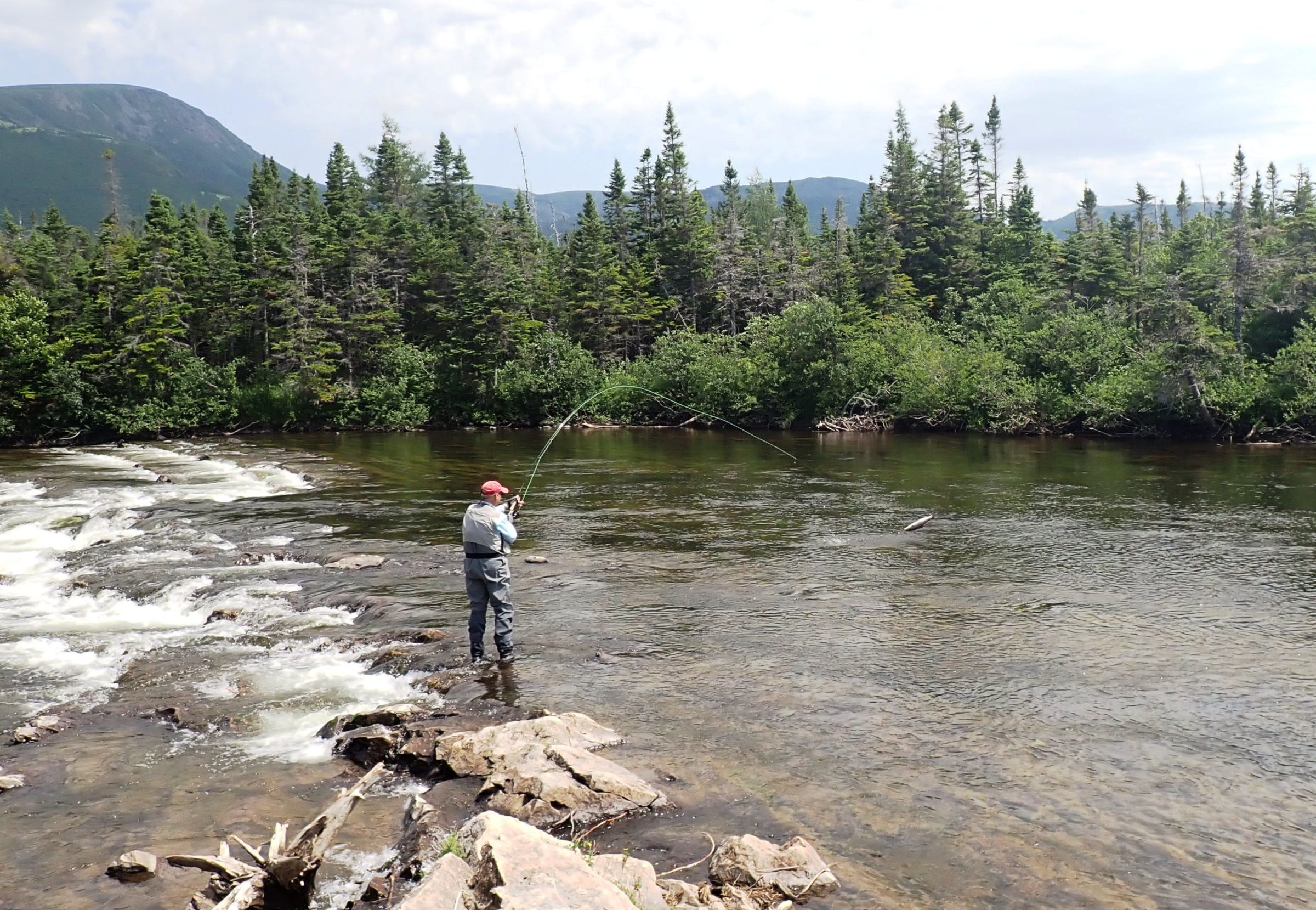 Grilse on at The Landing. 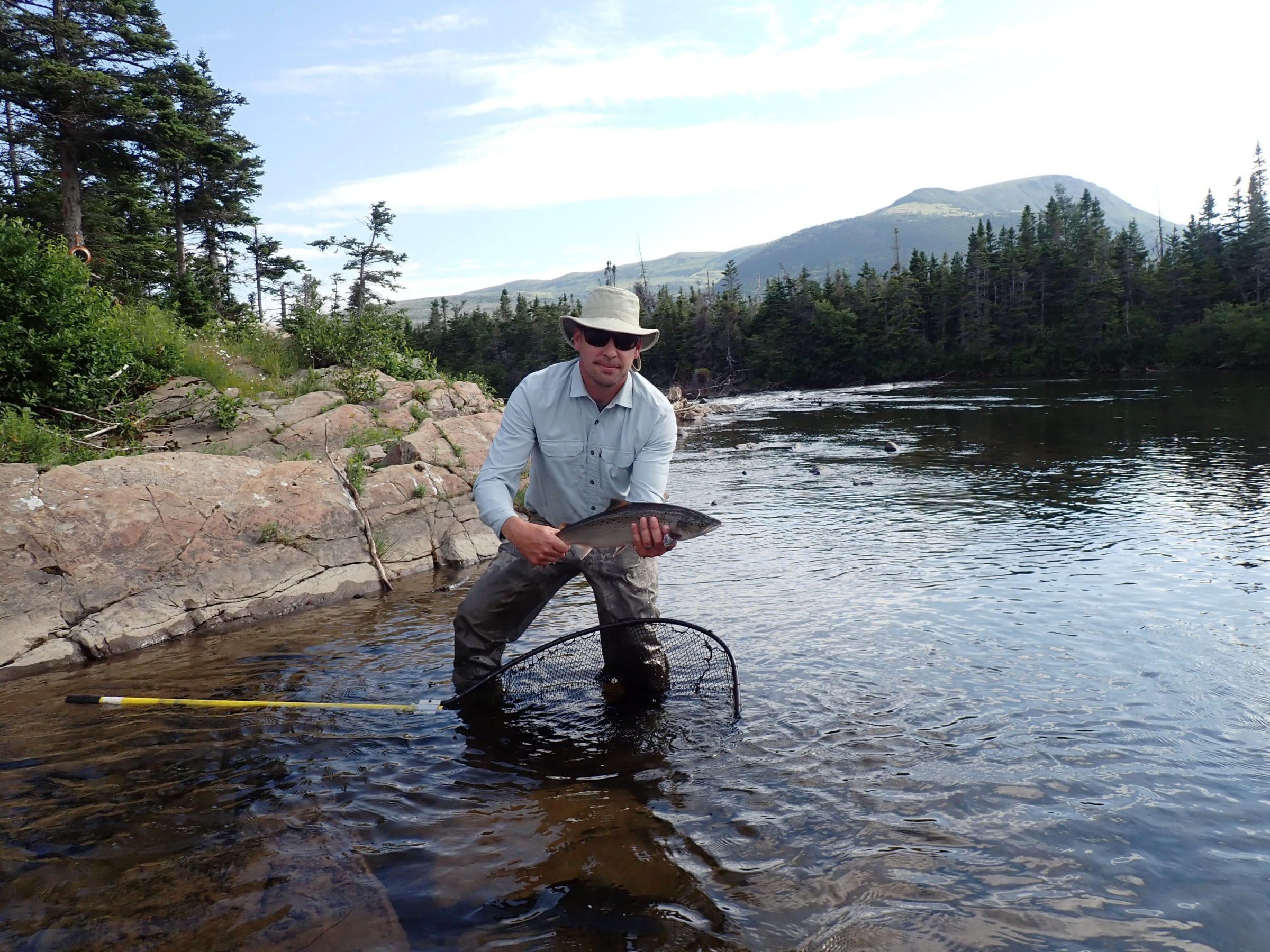 Lodge owner Paul Rogers holds an about to be released grilse at The Landing.