Fishing Friends – Early last week I canceled my planned fishing trip to the Miramichi. I follow a number of the websites that I list on bradburnsfishing.com that show current water height and temperature and recent rain at various points in the Province.  I put that info together with the Canadian Govt. weather forecast and try to estimate what fishing conditions will be like.  The weather looked far too warm despite the encouraging reports of a good run so far on the Miramichi for 2016.   On Wed. night three days later, I changed my mind, and together with my wife June we drove up on Friday to fish Saturday and Sunday.  It looked like there might be a brief window of decent conditions.

From reports I’d heard I knew that over the previous 10 days or so that a lot of salmon and grilse had entered the Miramichi. Temperatures have been up and down, but generally warm, and fishing action has risen and fallen with conditions.  The better cold-water holding pools now had fish, and when conditions turned cool and damp for a day or two those pools can produce some good catches.

The forecast that gave me hope called for significant thunderstorms on Friday with moderate rain to cool things off, and then a cloudy, rainy day on Saturday, and to a lesser degree on Sunday. Saturday’s highs were forecast to be a seasonably cool 22C.  I reasoned that the rain would cool down the river, and that the water would remain cool all day giving me a shot at the fish in our cold water pool in the lower Cains during the morning, and in the evening I could fish on the Miramichi and might have a few new fish moving up the river.  I’d make my plans for Sunday depending on how things went on Saturday.  Over the years I’ve made many of these quick trips during the warmer part of the summer, and I’ve often found some very good fishing available.

So how did it work out this time? Poorly is the short answer.  On Thursday the forecast began to evaporate – literally.  Those dark, rain clouds forecast for Saturday turned to partly sunny, and with that the forecast temps went from 22C to 27C, but in reality they ended up around 31C.  This produced some of the strongest thunderstorms in living memory across the northern half of the Province.  Another inch and a half of rain fell on many parts of the Miramichi valley.  We left camp at noon Sunday with a 16-inch raise of chocolate-colored, 75F water coming down river. A good part of this water actually came from Friday night’s inch and a half of rain over the headwaters 100 miles or more inland.

But the trip wasn’t completely without salmon action. On Saturday there were a fair number of fish holding in our cold water pool on the Cains.  I got one good pull seconds after one of my casts hit the water.  I believe that cast landed just so that it surprised the fish and it lashed at the fly, but simply did not take it well, and was never really hooked.   Conditions seemed pretty good for a few hours.  Salmon showed at various locations throughout the pool, and I expected a hit on every cast, but it just didn’t happen. 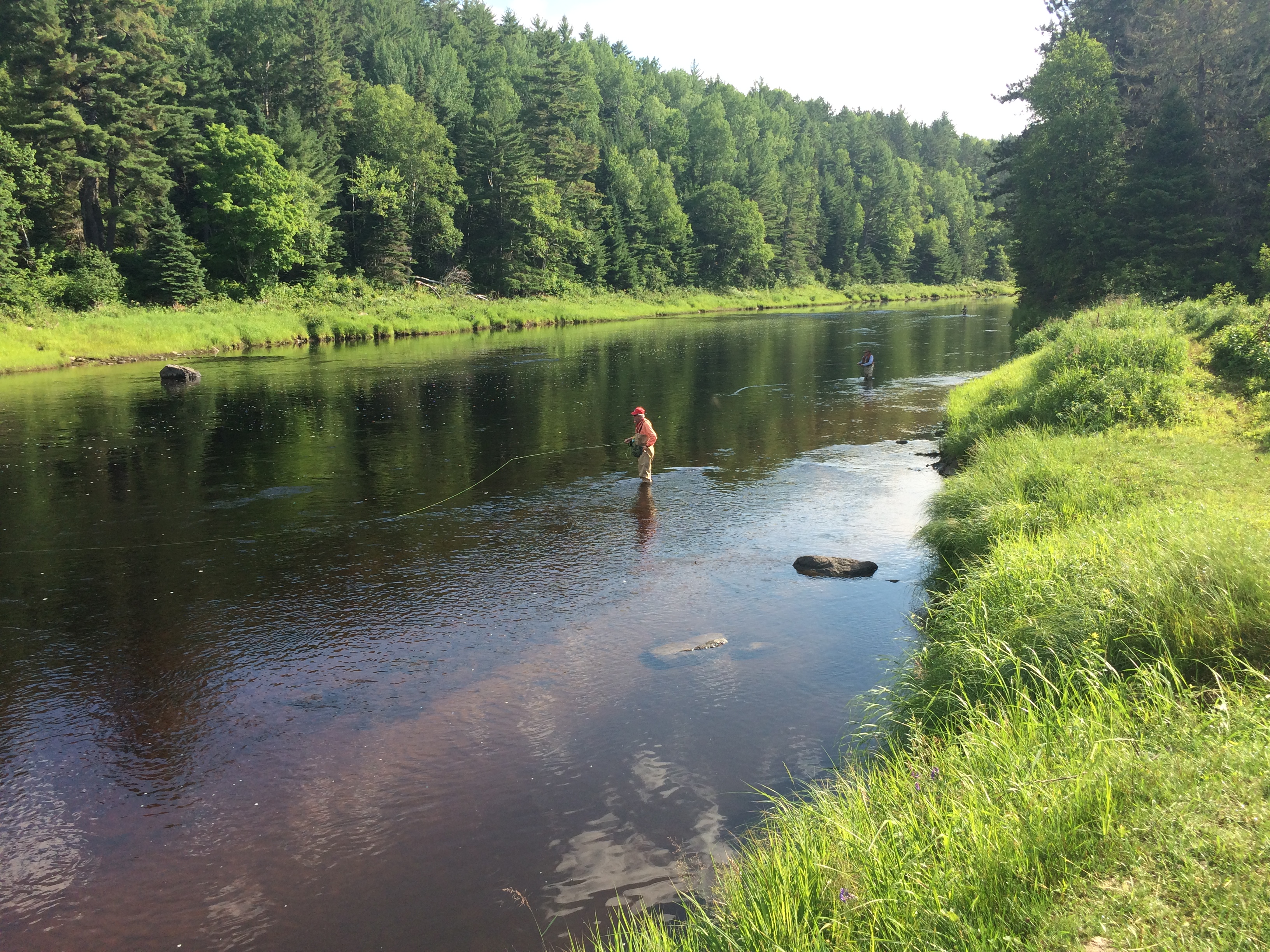 Cains River photo Nathan Wilbur. The angler in the foreground is fishing just below the brook outlet.

The morning also gave me a chance to observe how the fish positioned themselves in the cool water flow of the brook. I’m always very entertained by watching salmon in their natural habitat.  That morning there was a good flow of 62F water from the brook due to the previous night’s rain.  The Cains immediately above the brook was 70F and 100 feet down river of the brook it was 66F.  The water on Saturday was quite clear by Cains standards, and from the high bank I could see salmon and grilse laying together in groups of from one to a half-dozen fish.  The current was moving at a very moderate pace in the areas the fish were holding, and both the salmon and grilse were laying side by side in depressions in the gravel bottom that were typically located between larger rocks both up and down stream.  No fly that I put near any of them was of the slightest interest.  I think the fish just weren’t comfortable in the relatively bright, shallow water.  Clearly these fish chose the less desirable depth for the comfort of the cool water flowing directly down on them from the brook.  Fish were also showing out in the deeper parts of the pool, and so I concentrated my fishing on those areas, thinking the fish might take better from the somewhat deeper lies – but they didn’t.

The thunders storms were severe on Saturday evening and I never left the deck of the camp. The lightning shows were spectacular, but there was no fishing – unless you had a death wish.  Sunday morning we returned to the Cains but the water was now rising fast and very dirty.  I made a pass through the pool with no luck and only seeing a couple of fish, and decided to bag it and head home.

PS  Some of you have been fortunate enough over the years to have fished with one of these great Miramichi  guides, Marty Stewart, Wesley Curtis, or Gary Colford.  Marty is an accomplished bird dog man as well as salmon guide, and spent many years at Alex Mills Old River Lodge.  Gary guided with Willy Bacso at Wades and is now at Byron Coughlin’s Country Haven, and Wesley has been at the famed Mountain Channel for many years.  All three of these men have been accepted in to the Miramichi Salmon Museum’s Hall of Fame, and will be inducted in a ceremony on October 1 this fall.  If you haven’t visited the museum be sure to put it on the schedule for your next trip to the Miramichi region.  I guarantee that you’ll love it. 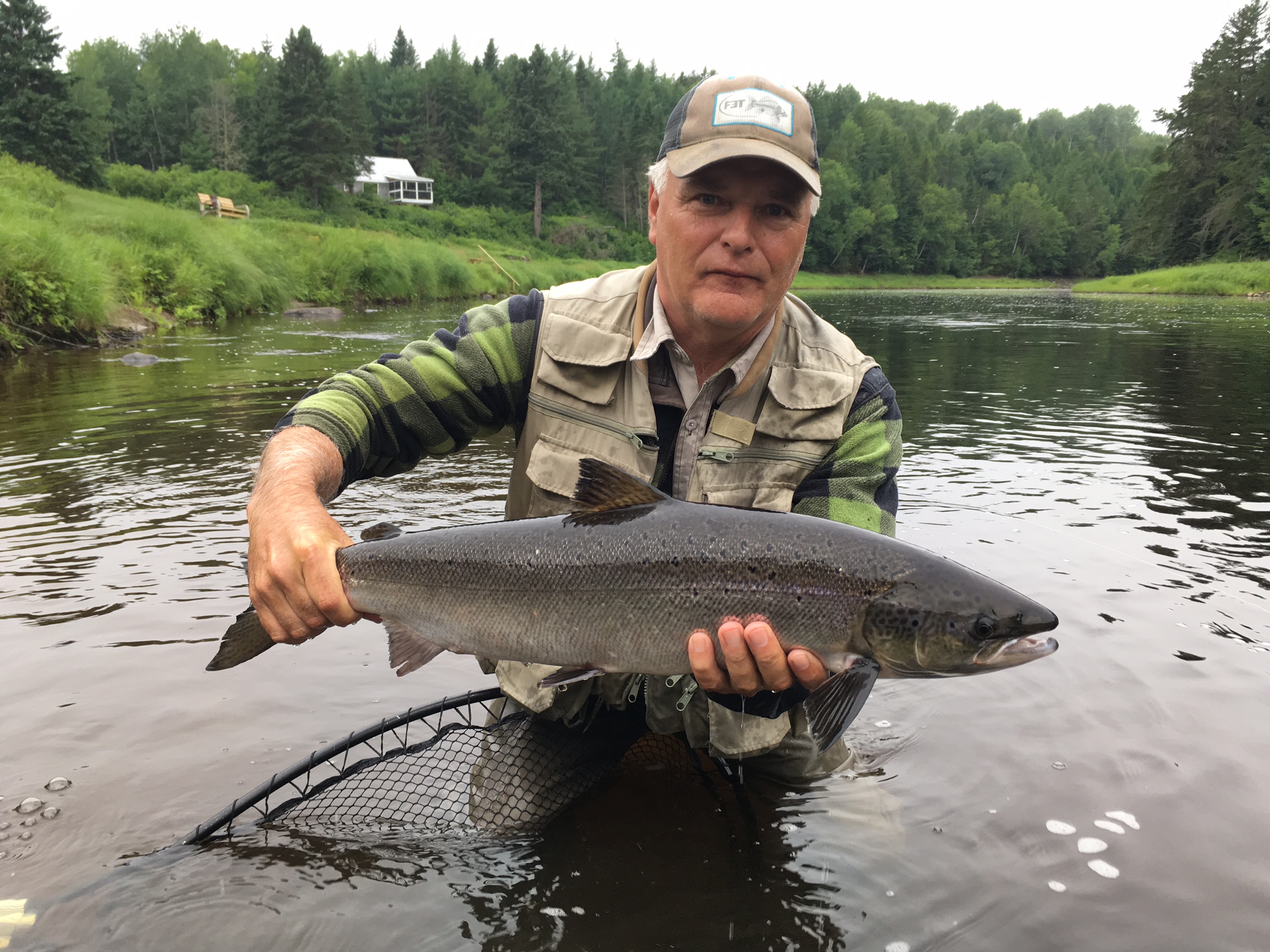 Yesterday, Monday 7/25, the day after I headed home because of high, dirty, warm water, Byron Coughlan’s Country Haven anglers released 2 salmon and 3 grilse from the same pool I’d struck out in.  Some of the fish had sea lice, obviously coming in on the back of that high, dirty water.  In salmon fishing there is only one thing as important as timing, and that is being there with your fly in the water.