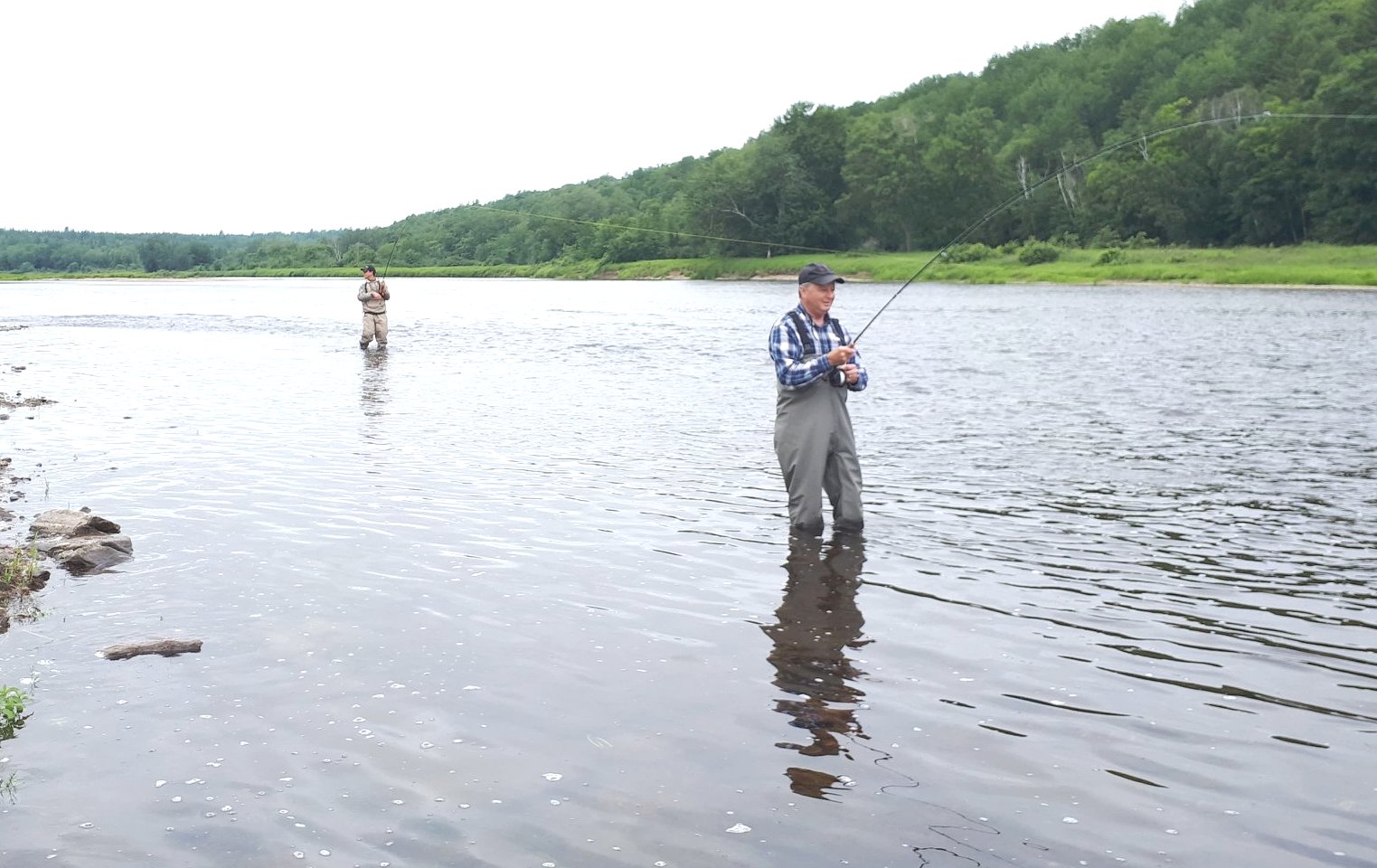 Fishing Friends – July 11/2020 – there are a number of new and ongoing Atlantic salmon news items available regarding the Miramichi, but none more noteworthy than the surprisingly robust run of Atlantic salmon – grilse especially – that is taking place on the Southwest Miramichi this season. 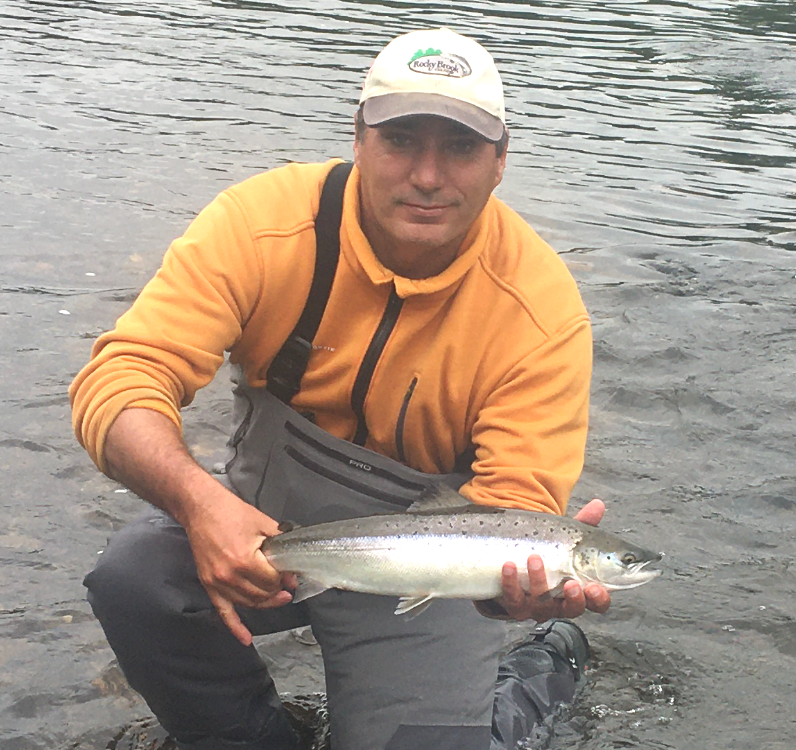 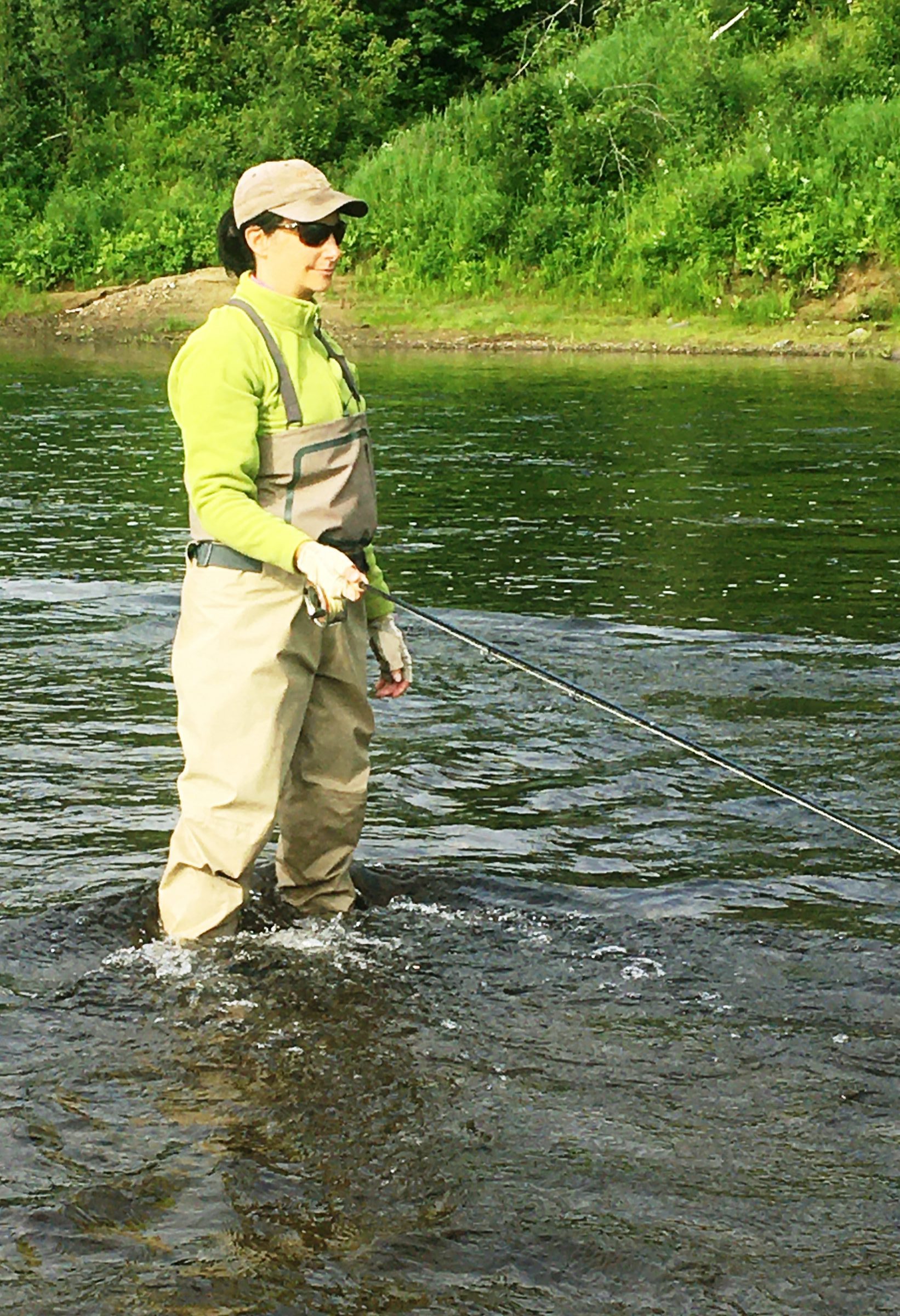 The good numbers of fish that I reported in my last blog on June 22nd were stifled a little by the early heat wave, but that passed, and along with a little rain the run increased.  Jason Curtis told me that he had never seen as many salmon schools passing his house in June as he did during the last week of that month.  It continued into July.  On July 4th Jason and his wife Jennifer had good action at Doctor’s Island, and the next day he fished in the evening and hooked 5 landing 3, had numerous other fish come at the fly.  In his words the place was simply “lousy with grilse.”

A couple of days later David Donahue, who lives just upriver from Doctor’s island and has a terrific vantage point to observe moving fish schools said that in the last week he had seen 80 to 90 schools of salmon waking by with numerous fish jumping and rolling – the moving schools make a big v-shaped disturbance on the surface of the water.  David’s father guided on Doctor’s Island, and he has lived in site of the river his whole life, so he knows what he is looking at.  David has been more than concerned about the state of the river’s salmon, and like many of us he finds that this big push of fish after the last few years of serious decline is very uplifting. 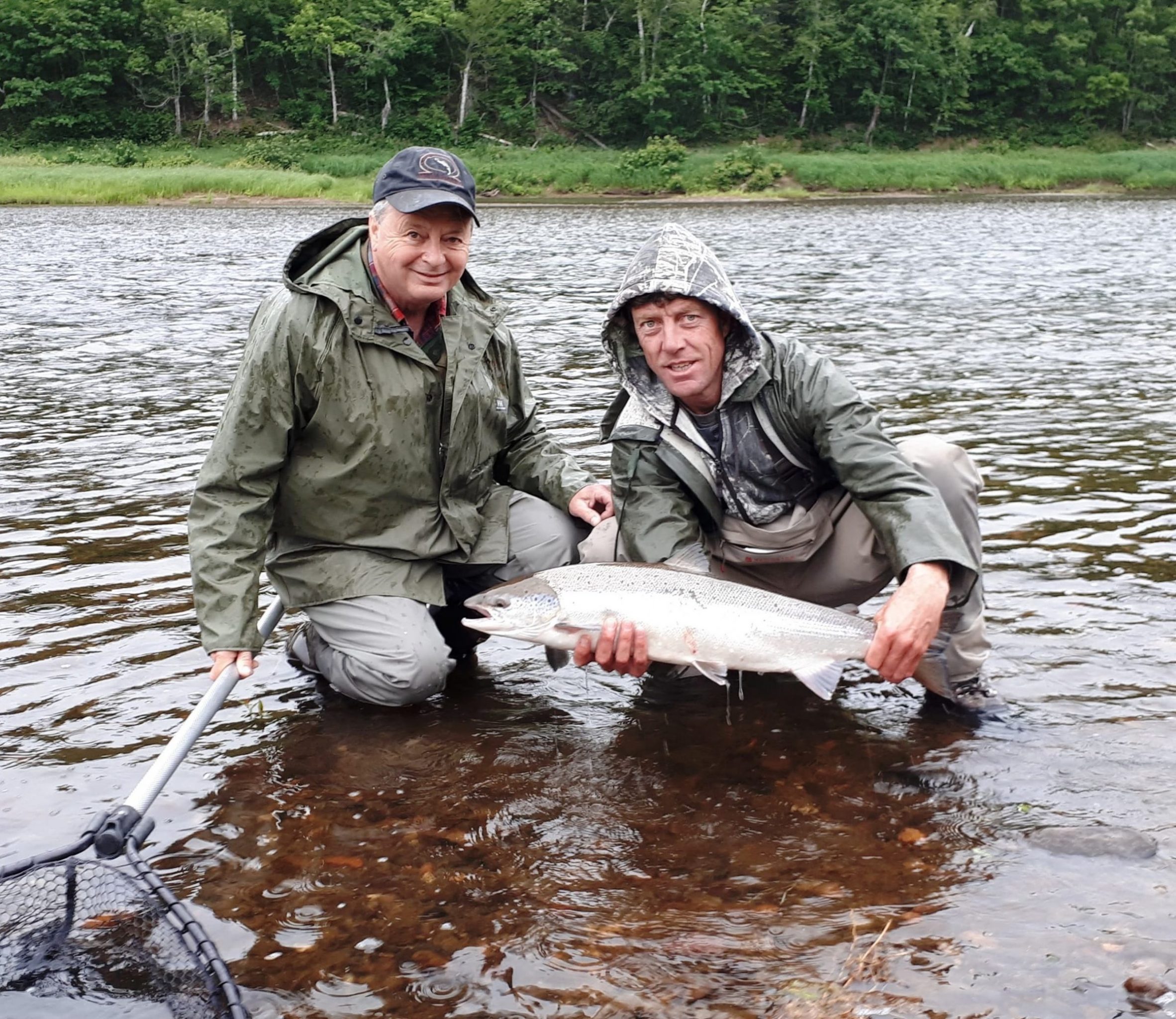 Unfortunately, due to the virus, only New Brunswick residents and fishermen from neighboring provinces can get in on the action.  This is tough on the outfitters and camp owners from outside the Province, but for those who are there to experience it the fishing is excellent.  Byron Coughlin of Country Haven continues to post his results on Facebook, and there are lots of smiling faces.  Not all of them are grilse either.  In fact Eddie Colford, head guide at Black Brook who is in one of the best positions on the river to observe salmon said that he is seeing a good number of salmon, and a lot more grilse than in years past.  The weather forecast for the next two weeks says that we will have several days with precipitation, and air temperatures that are consistently below the seasonal average.  This is shaping up to be the best July for fishing conditions since 2011.

Check out the video below from Country Haven of a very competent young angler doing a great job of releasing this salmon.  Country Haven has had a number of father and son groups at the lodge for this great fishing.

The Dungarvon and Northwest Miramichi barrier reports chronicle the run up these early tributaries so far this season.  For the week ending June 29th the Dungarvon was behind the 2019 early year-to-date totals, but pulled nearly even during the week of July 5th with a large showing of grilse.  The Northwest is far ahead of 2019 totals, but the run for July 5th was very weak.  The word is that these trends are continuing on both rivers, and we will have an updated report next week which I will pass the info on in a separate e-mail.

29 grilse and salmon for the week ending July 5th. 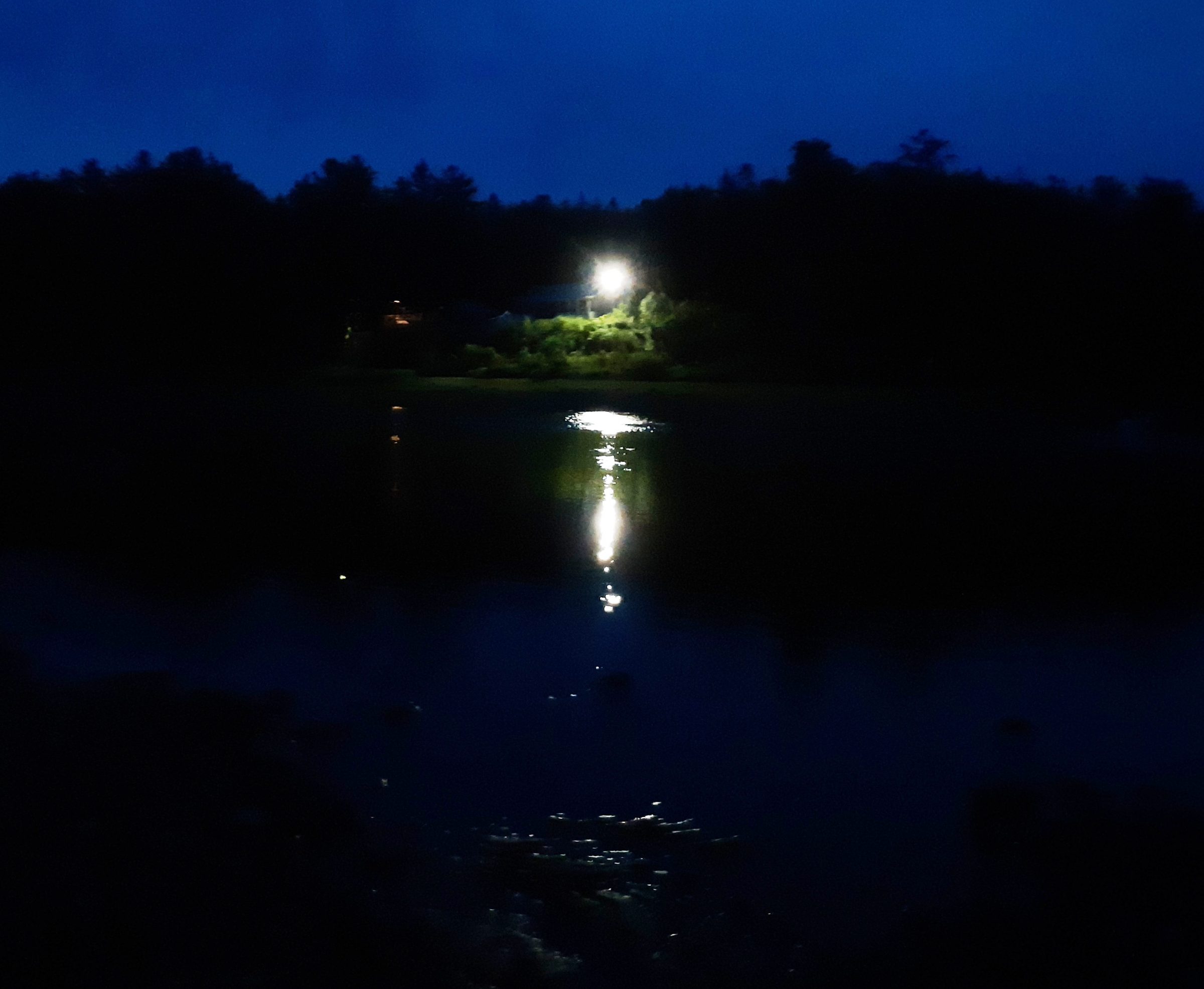 Anti-poaching night spot light at Black Brook could save the lives of a lot of salmon. Photo Eddie Colford.

The cold water pools were closed on Jun 22nd and remain closed.  That was a very early closing, but in some cases water temps during the heat wave got up to 27C/80F, and off and on since then they have been in the high 70s.  The SWM River has occasionally gotten down to 19C/66F during the last three weeks, but has not stayed there long enough to warrant long-term opening fishing in the sanctuary pools.  They were briefly opened for a couple of days earlier this week.  With numbers of  salmon building in these pools some private property owners have installed obstructions to make it difficult for poachers to net or snag in the pools.  At Black Brook – the main holding pool in a long section of the river – they have installed a big light that is run all night, and there are full-time watchman over the pool day and night.  We hope that more of that is done at other pools.  I’m also told that the wardens have been out and pinched some anglers fishing illegally in the Black Brook sanctuary.  This year the areas across from the brooks are closed on all the rivers.  This DFO website link will take you to complete information on all the pool closures.

The smallmouth bass, rotenone, eradication program has hit another snag.  We’re told that additional First Nation tribes from around the Province wanted to be consulted on the plan, and to accomplish that is going to run beyond the time limit by which rotenone had to be ordered and the plan put in place to get the people and equipment into the area where the work is to be done.  Considering that the request to approve this plan was applied for just about a year ago this delay is inexcusable, but when government is involved things can move at a snail’s pace, and that is exactly what has happened.  I’m told that the new plan is to keep trying to move everything forward and get the permits this fall so that everything is cleanly in place for 2021.  There are some who will think that this 12 month delay will let the smallmouths explode throughout the SWM system, but that may not be the case.  The first smallmouth bass was found in Miramichi Lake in 2008, and they have been caught there every year since.  As I recall some of the fish caught were 5 years old at that time.  That means that smallmouths have been in the Miramichi system for nearly 18 years and their presence within the Southwest Miramichi River itself has been shown to be in only a small section.  Certainly we urge anyone who fishes the Miramichi to kill any smallmouth bass that they catch in the hopes of continuing to contain the area of infestation.

Kill any of these that you catch in the Miramichi watershed.

Jason and Darrell have each sent me some photographs of the areas burned over in the June forest fires on Cains River.  This fire did destroy a couple of cabins and burn a fair amount of acreage, but persistent winds from the west blew it over towards Rogersville where it eventually burned out.  We understand the Camp Stanton near the mouth of Sabbies River was in the thick of the burning, but was spared any damage. 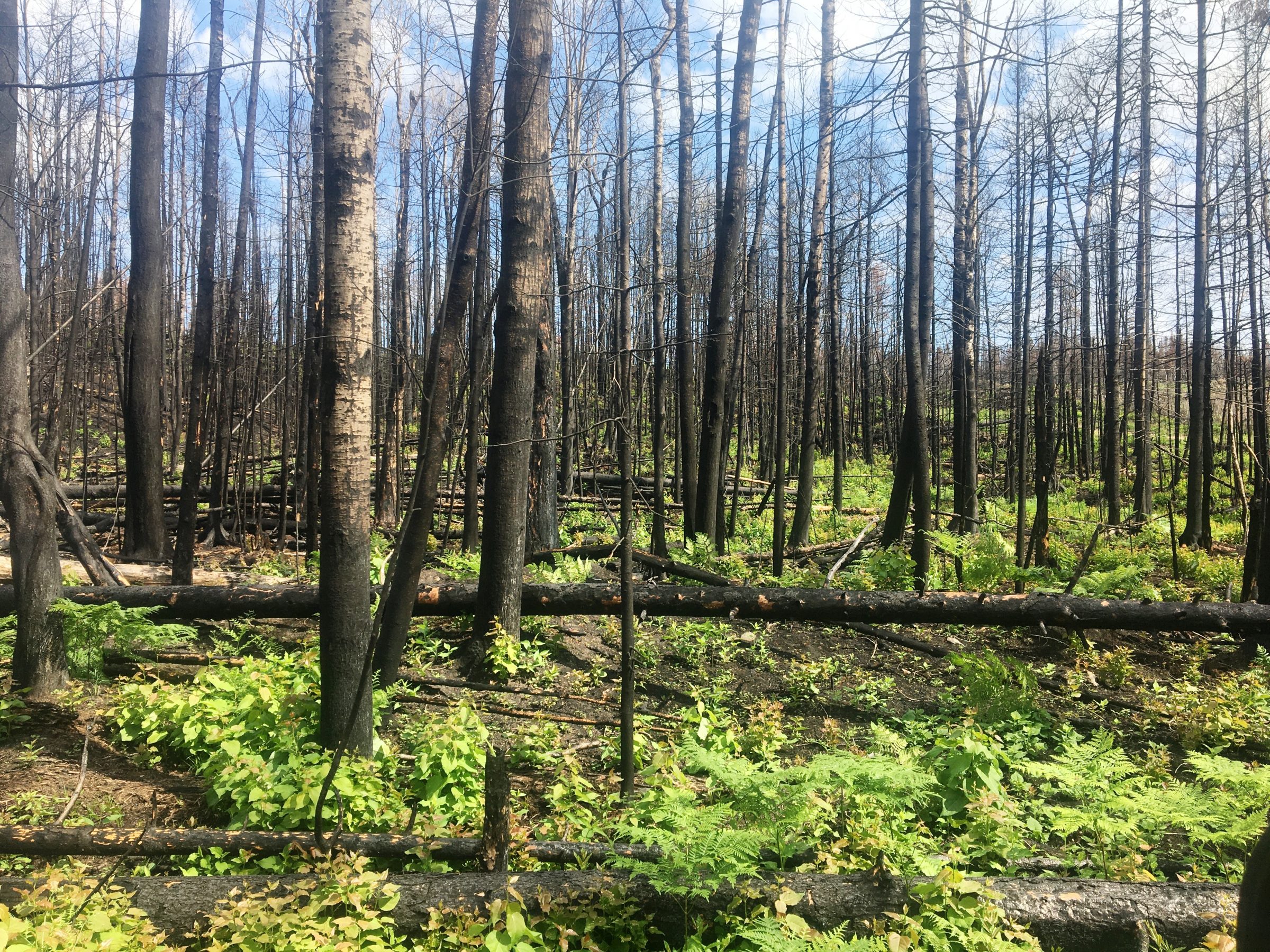 Fire from near Sabbies River 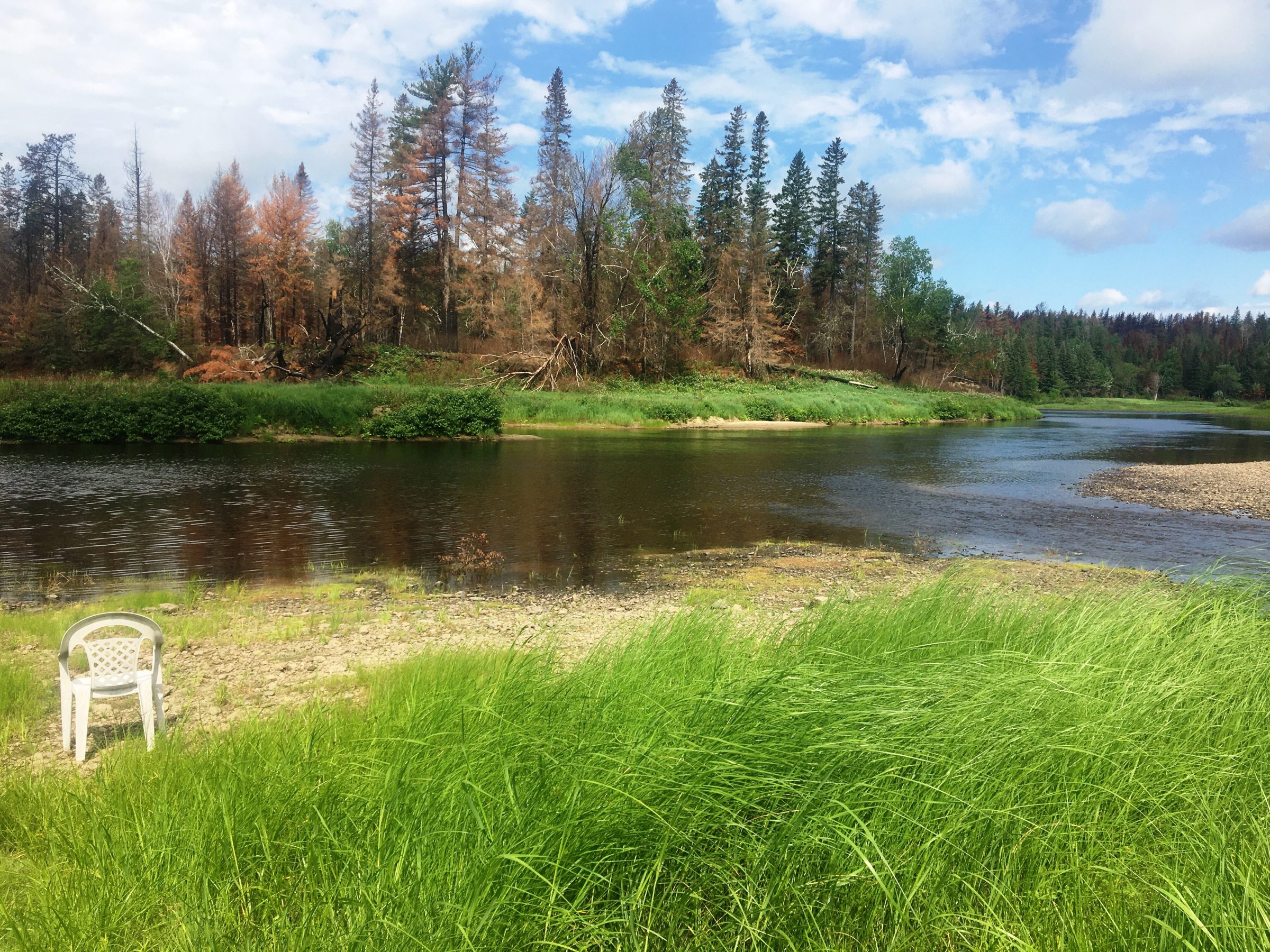 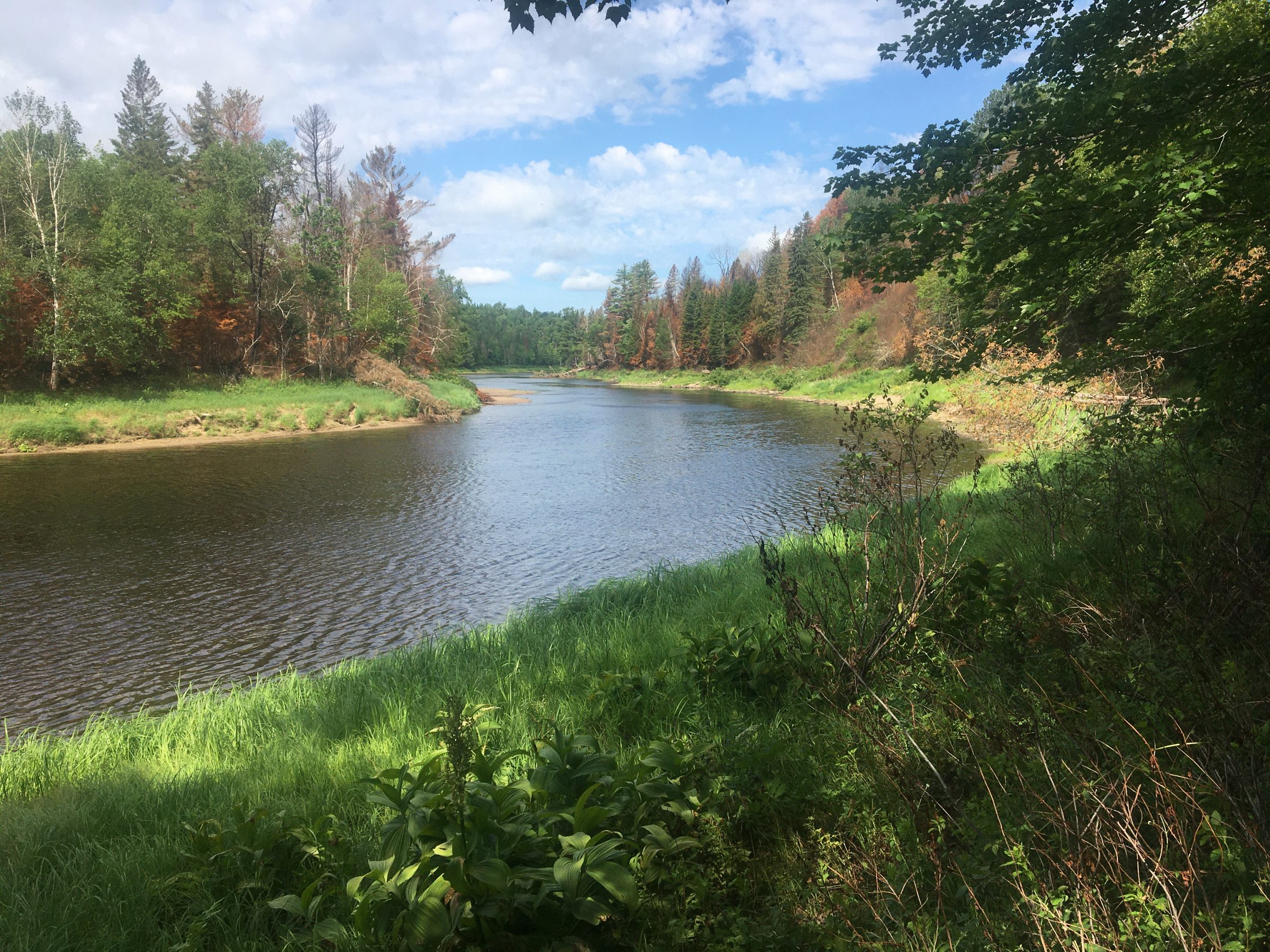 I don’t have any fresh news on CAST’s experimental river, nor do we know exactly how the First Nations did with their striped bass commercial fishery.   We will have some news from CAST later in the summer when more of their DNA work is finished to show how the various combinations of salmon spawned by both wild and SAS adults fared on their way to adulthood.  We may never know on striped bass since FN hasn’t made public how many striped bass they harvested.  It seems clear after a couple of years of fishing that whatever the amount FN are catching, it is well below the number of these over-protected predators that could safely be harvested.  Why not open this fishery up to the gaspereaux netters in Miramichi, and expand the quota by some considerable margin?  Why are these Canadian citizens less deserving of a chance to catch and sell these fish than FN fishermen, especially in view of the seemingly obvious fact that more need striped bass need to be harvested?  Striped bass are a very valuable commodity at market.  We’re sure that the money would be important to the commercial fishermen lucky enough to get the permits.  They would make certain that the entire quota was harvested.

After the refusal to allow the CAST supplementation program, and the failure to get a rotenone permit in a year of trying, I can’t help but wonder how much more seriously the needs of the recreational fishery for Atlantic salmon would be taken by DFO if the Atlantic Salmon Federation had stood by the MSA right along on the CAST SAS program.  I’m not the first one who has called for unity of message in NB.  Hopefully the announcements that continue to come from CAST will give the ASF sufficient reason to support the CAST SAS program, and for the ASF to fight together with the MSA to defeat the various threats facing Atlantic salmon in the Miramichi River system.  Yes the organizations have cooperated on some aspects of field work, but the ASF’s opposition to the CAST SAS program seriously weakened the credibility of both organizations.

On the Cains: Atlantic Salmon and Sea-Run Brook Trout on the Miramichi’s Greatest Tributary authored by me is available now.  I have received many letters telling me how much they are enjoying the book.  On the Cains is printed by Stackpole, but my earlier book Closing the Season, also very well received, was self-published.  There was a big discount to print extra copies, and I still have plenty available.  There is a special 50% reduction of the price on Closing the Season if you buy it along with On the Cains.  All buying options are available from the top of page menu bar at this link.  The page for On the Cains has a fairly extensive preview that will give you an idea what is in the book.  If you don’t want to pay by Pay Pal or credit card, you can just check instead.  Just send me an e-mail at bigbass@maine.rr.com.