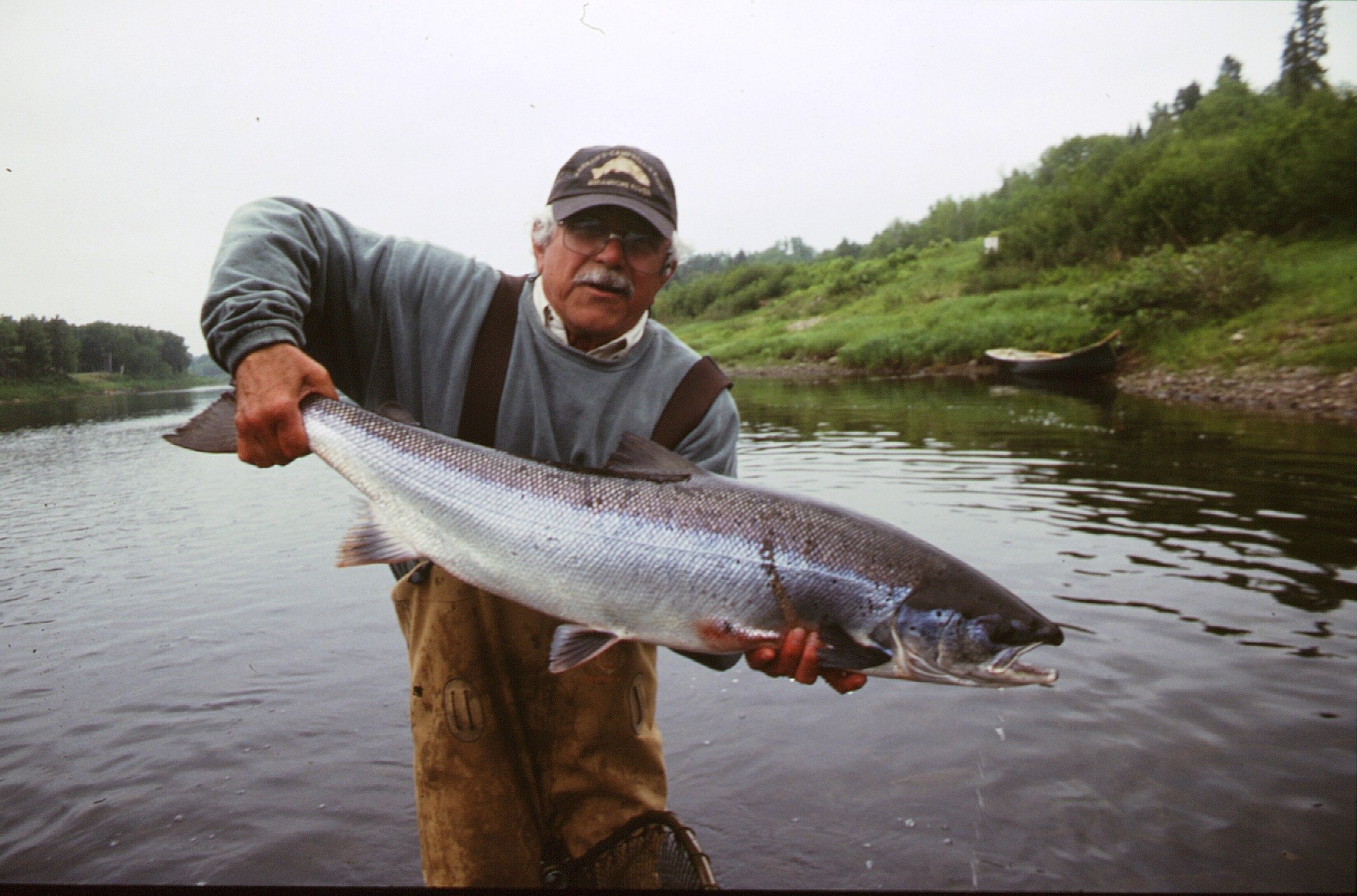 The photos with this post are a pleasant reflection on June salmon fishing in 2004.  This hen was roughly measured at 49 inches, and is still my largest fish from the SWM. 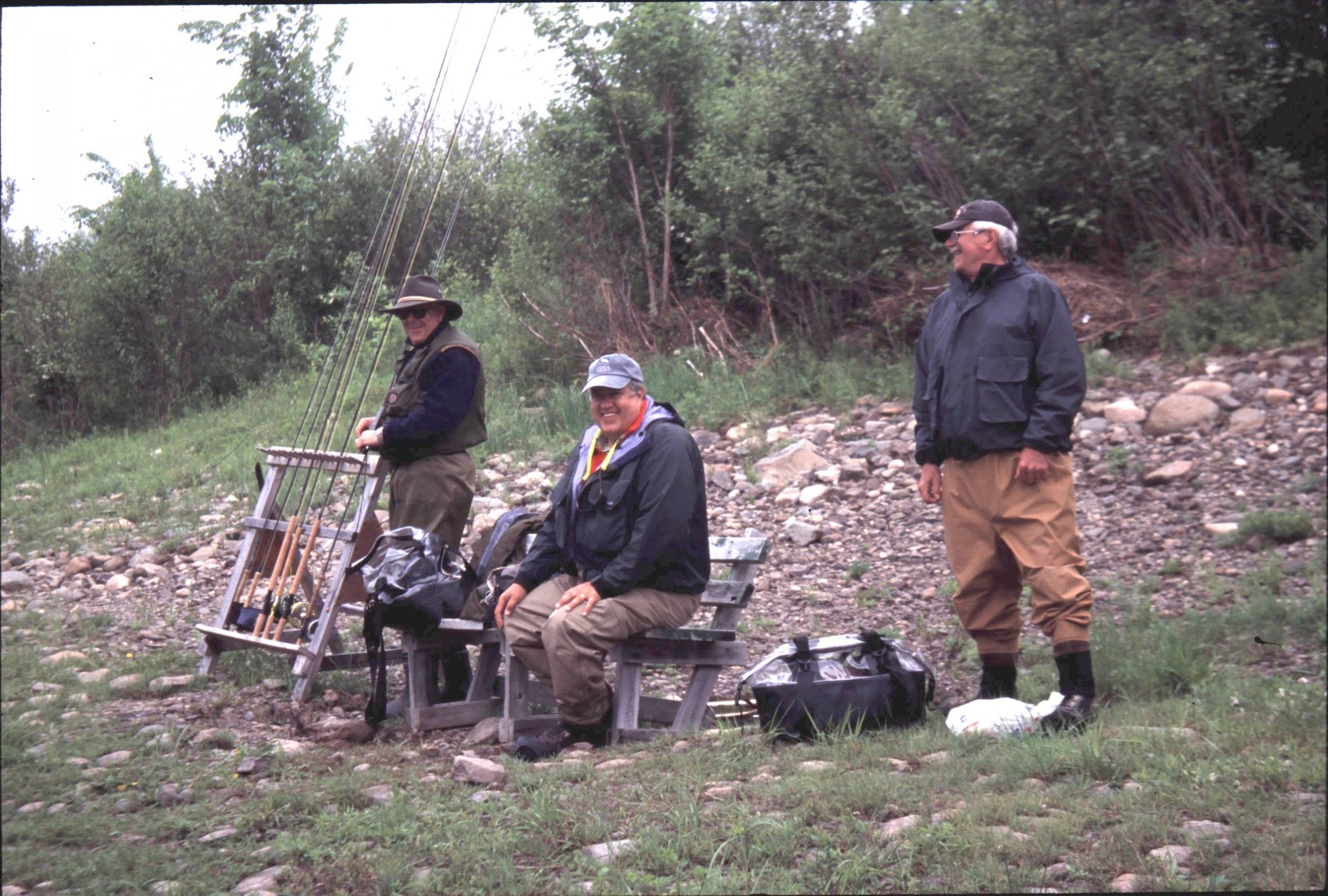 Fishing Friends – what a crazy month June has been.  Virtually every piece of news coming out of the Miramichi whether it has to do with salmon conservation, the weather, the runs of anadromous fish into the Miramichi, or the ramifications of Covid 19 has a surreal twist.

Runs of anadromous fish – Let’s start there because it is probably the most pleasant topic – with the possible exception of striped bass.  I have heard the DFO has estimated that the 2020 striped bass run is down somewhat this year.  I don’t know what the numbers actually are, and with the huge margin of error assigned to any official guesstimates it is very unlikely that anyone really knows, but there are lots and lots of them.  Part of the official excuse for the inanely restrictive striped bass catch regulations is that the NW Miramichi is the only officially known spawning area for striped bass north of Nova Scotia.  The Miramichi Salmon Assoc, though, has done its own sampling for striped bass larvae in the Tabusintac, and the SW Miramichi.  Striped bass have been observed in the act of spawning in both these locations, and the MSA has proven that there are lots of surviving larval striped bass and later in the summer lots of young of the year striped bass, so it is clear that striped bass do spawn in at least two other rivers beside the NW.  Many in the know are confident that if other rivers like the Tracadie and numerous rivers to the south of the Miramichi were to be similarly tested that it would be proven that they spawn in these watersheds also.  This is a very important point because of restrictive government mandated protections that apply if the number of spawning locations is limited.  As an old business mentor of mine was fond of saying, “the truth will prevail” and eventually more realistic fishing regulations will be placed on striped bass.

This year, possibly due to some positive ocean conditions, the Miramichi also hosted excellent runs of both shad and gaspereau.  Graybeards are saying that it is the most of either species that have been in the river in many years.  Gaspereau are heavily fished, mostly for lobster bait, and there were so many this year that the local market collapsed and with no place to sell them fishing had to stop. 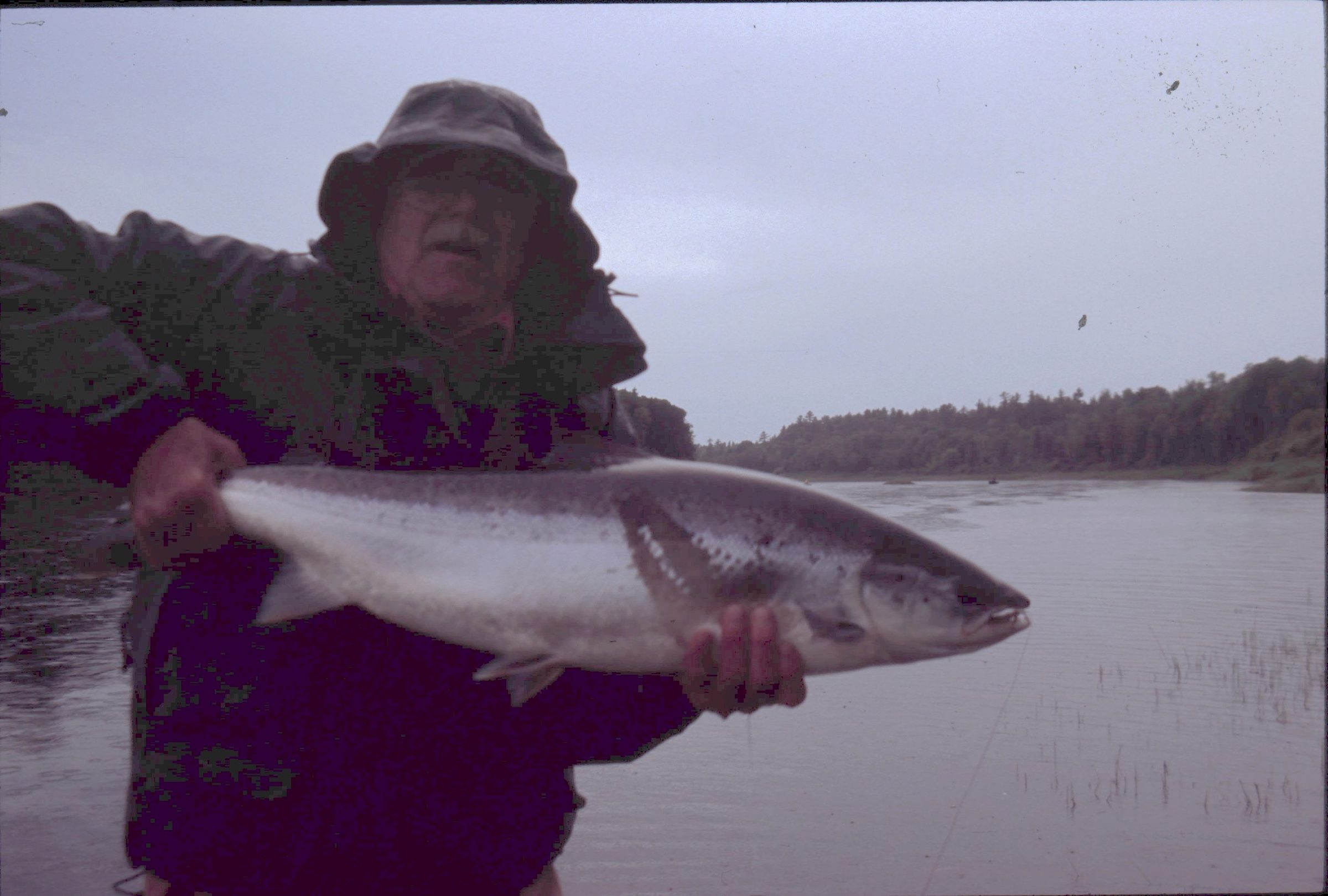 Look at the wedge shape of this June fish. The power of these early run fish make one worth several caught later in the season.

Early indications of Atlantic salmon returns – and it really is hard to read too much into these because such a small percentage of the run has come in by this date – are also positive.  There is no counting in Millerton this year.  DFO says this is due to Covid…  This means that unless something changes soon there will be no real estimate of the salmon run for this year.  Up until just before this heat wave struck, though, good numbers of salmon were being seen and some caught in both the SW and NW branches.  Quite a number of these fish were grilse, and while everyone prefers large salmon, a strong early showing of grilse can be an indicator that it will be a good grilse run, and that would certainly be very welcome as well as indicative of a good salmon run in 2021.

Just after I wrote this I saw a Facebook post and several comments on Atlantic Salmon Anglers of New Brunswick.  Apparently a good number of salmon were seen in Quarryville over the weekend as well as other locations up inside the SW Miramichi.  When there is a good run of salmon on they are often seen at the head of tide at Quarryville jumping before deciding whether or not to enter river.   The poster is an angler who I have corresponded with before about his Quarryville observations, and from my experience he knows what he is looking at.

Physical conditions – After a cold, wet spring with typical spring water levels someone with lots of authority changed all the rules.  It hasn’t really rained in a month now.  It is so dry that the Provincial government has closed crown land to recreational activities.  The river today slipped to just below .7 meters in Blackville.  That is the lowest that I have ever seen it at this date, but considering the lack of rain it really isn’t as bad as it could be.  At this time of the season, even a little rain will normally quickly bring the river up because the water table is still very high from winter and spring run-off.

Beside the record low water we have just now been hit with a heat wave.  It started last Thursday, and is supposed to run through Tuesday.  On Saturday 6/20 most of the Miramichi got a break from a cool NE wind.  Those conditions were around for much of 6/21 also, but it cleared off and Doaktown was 29C at 5:00 PM on Sunday.  The water temperature reached 25C/77F.  That is really warm, but is not unprecedented.  Water temps on Saturday night dropped back to 18C/65F – not bad – and it looks like a long-term return to normal temps with some showers and rain beginning on Wed.

DFO “Department of Fisheries and Oceans” has missed its own deadline for issuing the permit for eradicating smallmouth bass from the SW Miramichi by using a natural chemical called rotenone.  We have been told that DFO Moncton favors the plan, but that under the Trudeau administration everything to do with the river must be fully consulted with First Nations.  Eel Ground, the principal band with headquarters on the NW Miramichi is also in favor.  Apparently, though, other groups want to also be officially consulted, and this hasn’t been done yet.  The permits must be issued by the end of June for the rotenone to be ordered, and for everything to be put in place for a fall application.  Right now it appears that things are very much up in the air.  The inaction of DFO on this issue reminds me of this biblical phrase: “He that observeth the wind shall not sow, and he that regardeth the clouds shall not reap.”  A lot is riding on this as smallmouth bass are a non-native predator that could be a significant problem for the salmon parr of the Miramichi. 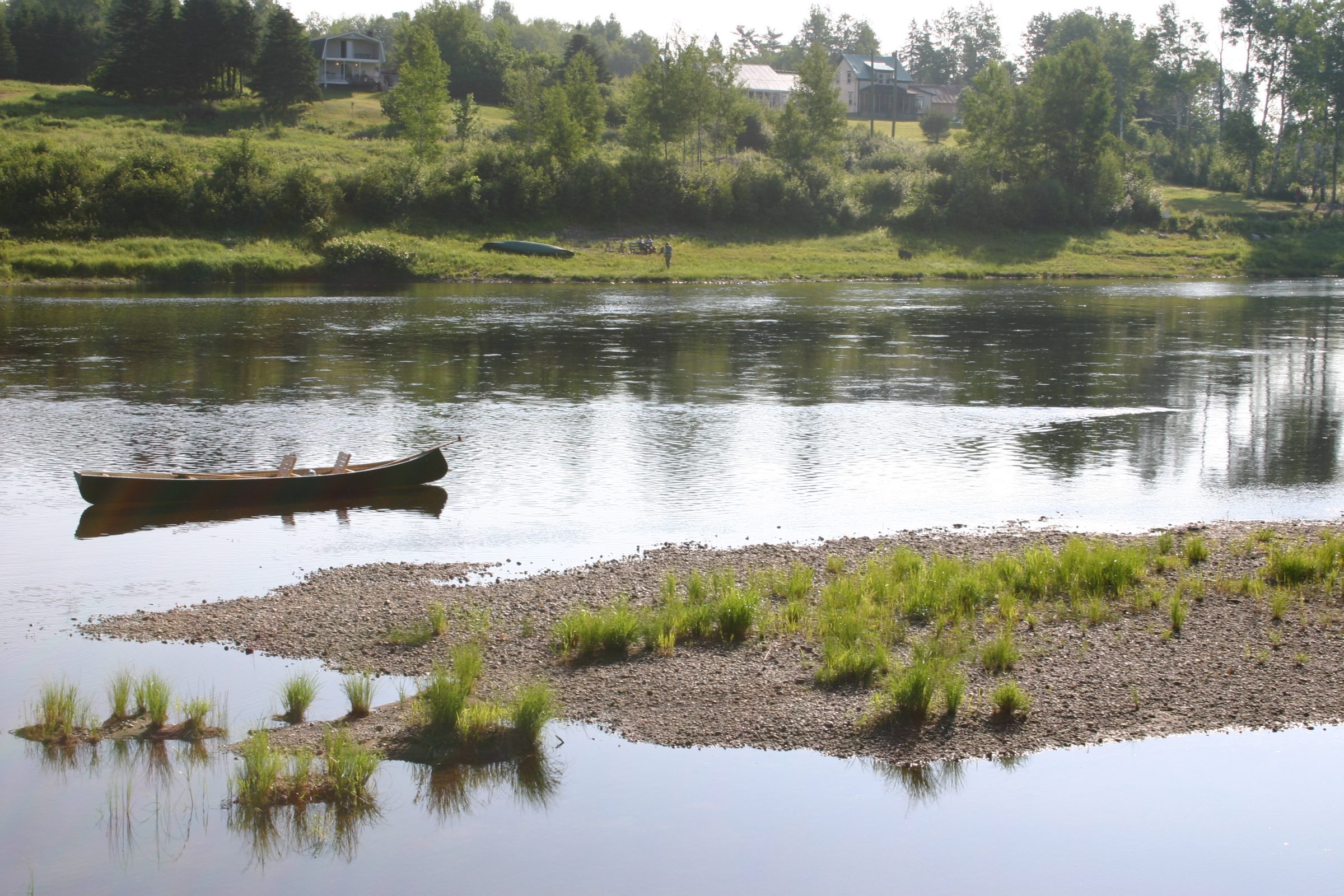 Campbell’s Pool looking from the Keenan bank on another relatively low water June.

The entire fishing season is in doubt.  On June 14th I tried to enter Canada to plan a summer’s non-fishing work for the two full time guides that we employ at Campbell’s, and to check on the physical condition of my camps.   I was refused entry because according to the border agent: “While you have a legitimate business interest in entering the country fishing and hunting outfitters are specifically not listed as essential businesses.”  Undoubtedly it will all change, but there is no point in my speculating when.

The MSA “Miramichi Salmon Assoc” is in there slugging it out on all these issues.  They will be doing their normal long list of field programs all season long.  This year, though, they have another issue and that is that an operating budget shortfall of $150,000 CA is anticipated due to their inability to hold their normal program of fundraising dinners.  I’ll be writing everyone later in the summer to ask for personal donations to help with this deficit.  Right now, though, the MSA is holding a series of online fundraising auctions that include a variety of merchandise and fishing trips.  USA residents should realize that they may not be able to take the trips if they won them.  There is no problem, though, in getting merchandise from NB.  Here is a link to the current auction https://www.32auctions.com/organizations/58948/auctions/81621?t=all.  Hopefully you can find something of interest.