Just how good is this year’s Miramichi River salmon run? 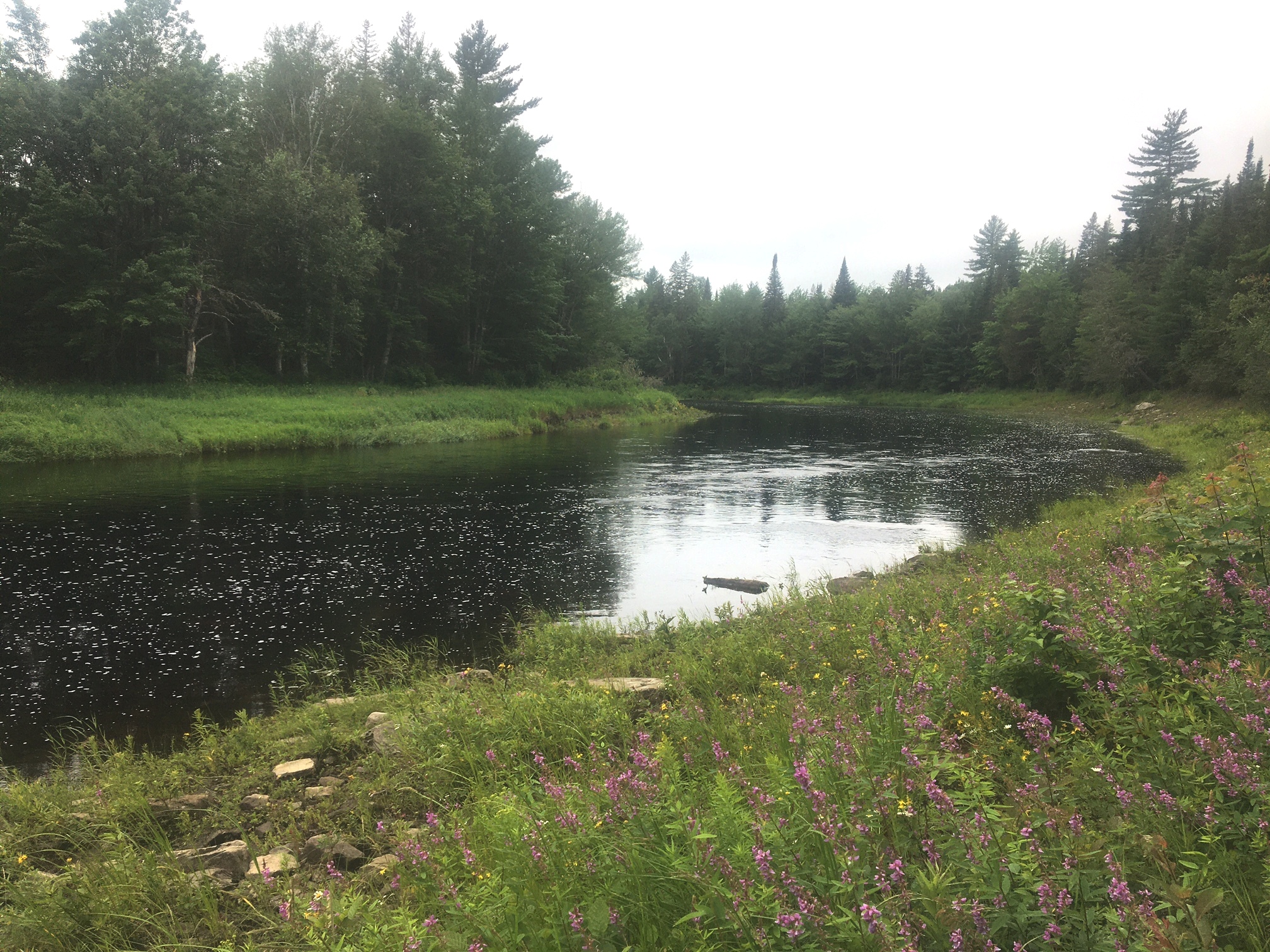 A mid Cains River pool in summer. Speculation is that pools like this which normally only hold fish in the fall may already have a few in residence thanks to the moist July.

Accounts of fishing on the Miramichi this year, along with numerous sightings by expert observers of jumping fish and moving schools of salmon, are all very promising.   Perhaps the very most comprehensive and reliable indicators of the size of the run are the DFO trap counts from Millerton and Cassilis.   Through July 15 the Cassilis trap on the NW Miramichi has counted 220 grilse – remember these nets catch just a small percentage of the actual run.  This is a great improvement over the 107 and 139 for 2018, 2019, but is far less than the 358 that was the average for the 20 years running from 1998 to 2017.

The situation on the NW with multi sea-winter salmon is similar.  Cassilis has registered 76 through July 15 which is more than double the catch in each of the last couple of years counted, but less than half the 176 averaged from 1998 through 2017. 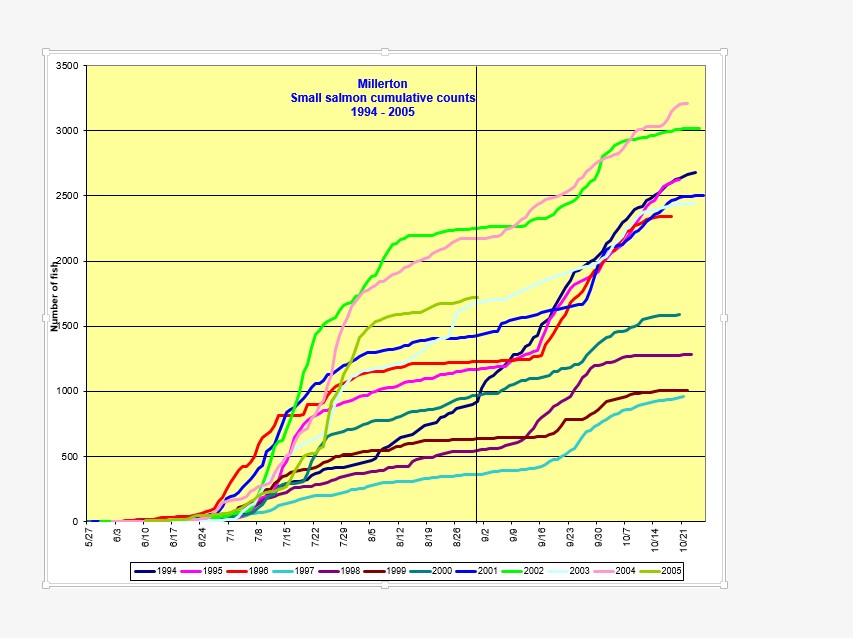 Official Millerton counts in DFO graph. Find 7/15 on the date axis at the bottom draw a line straight up. Follow those years of 500 plus returns to 7/15 to their conclusion, and you will see that they all appear to have quite good returns for the whole season. 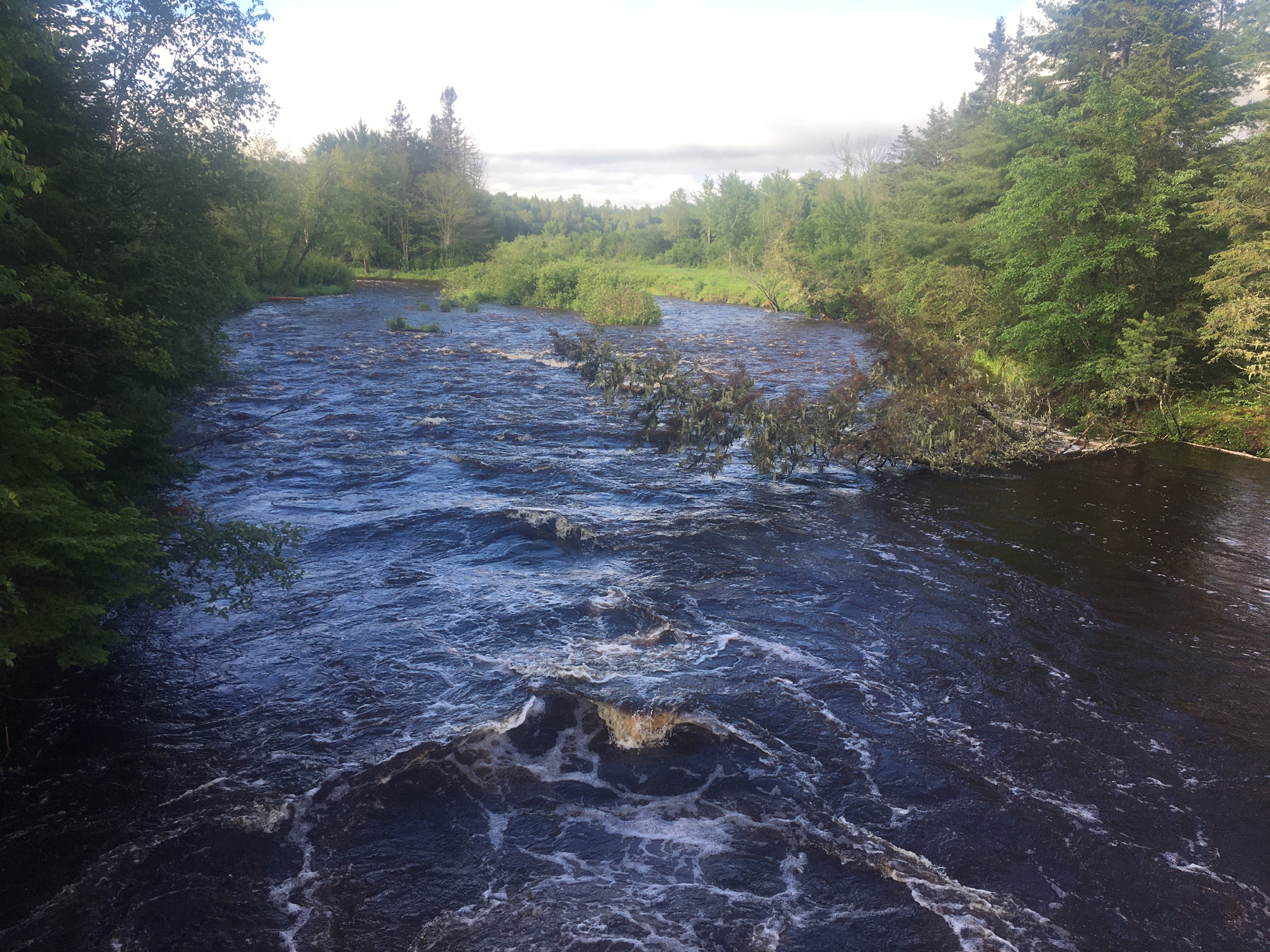 Jason Curtis said that after the July 9 rain Muzzeroll Brook would have been good for white water rafting.

For those lucky enough to be able to get out fishing on the Miramichi the experiences have often been very productive.  First, other than a very few days in June when we had the beginnings of warm, low water – that thankfully never fully materialized – the conditions have been relatively cool and moist.  The moist part means not only rain, but clouds and low light conditions.  By my experience that is the weather we are looking for.  Right now we are in the middle of a forecast three-day warm spell, but the 14 day forecast is for largely below normal high temps.  The end of that stretch will bring us to August, and historically the beginning of cooler temperatures. 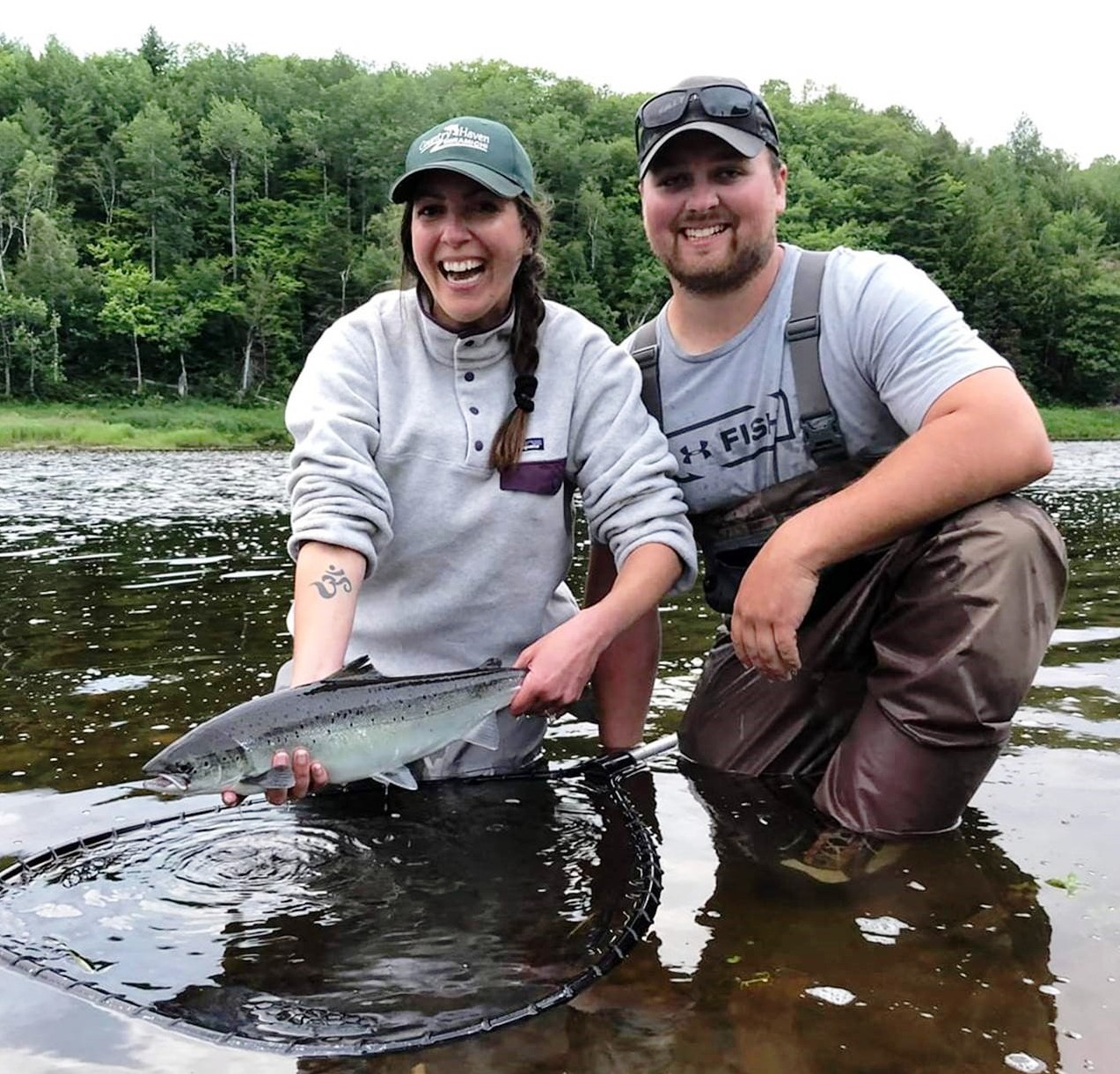 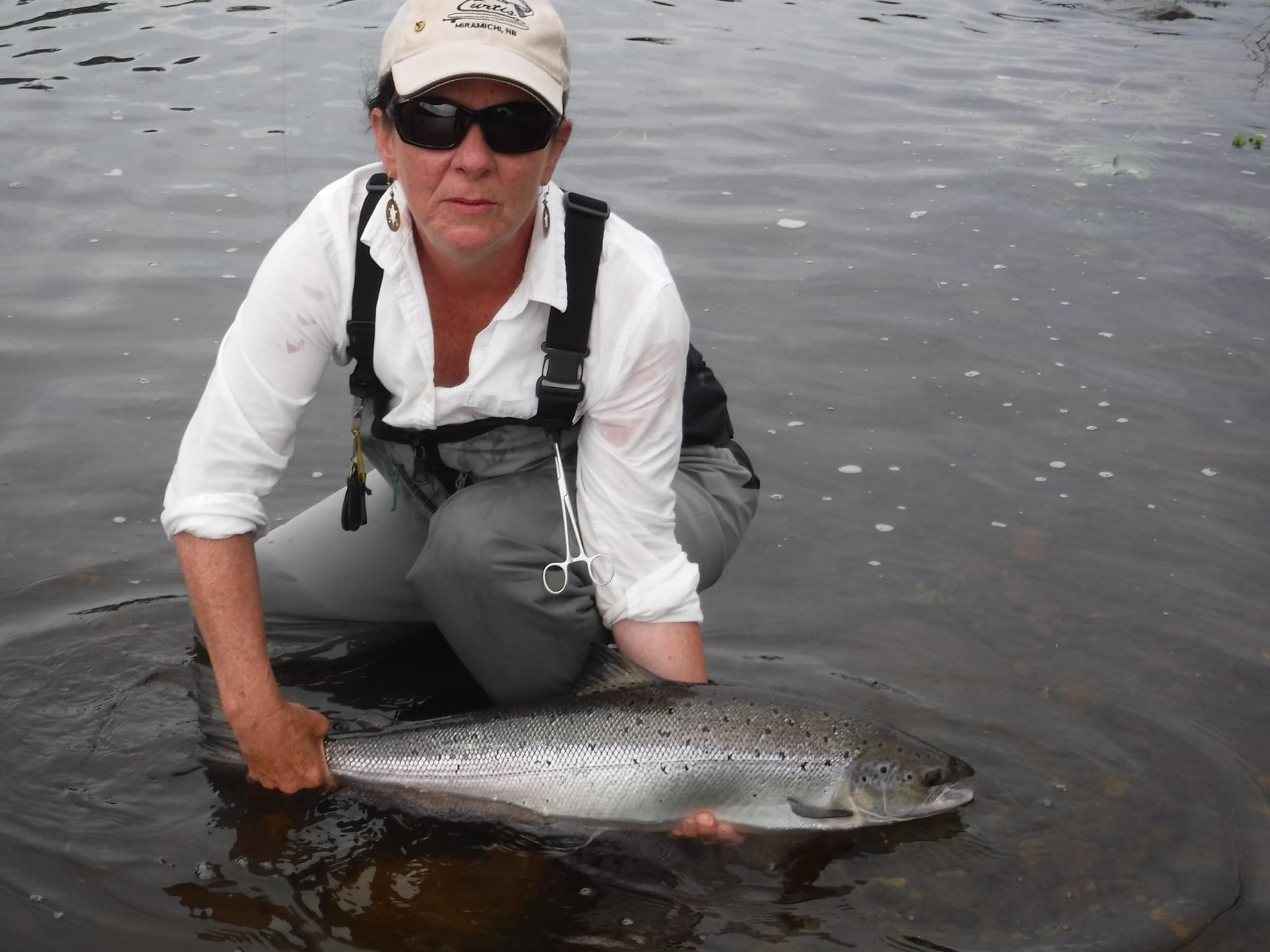 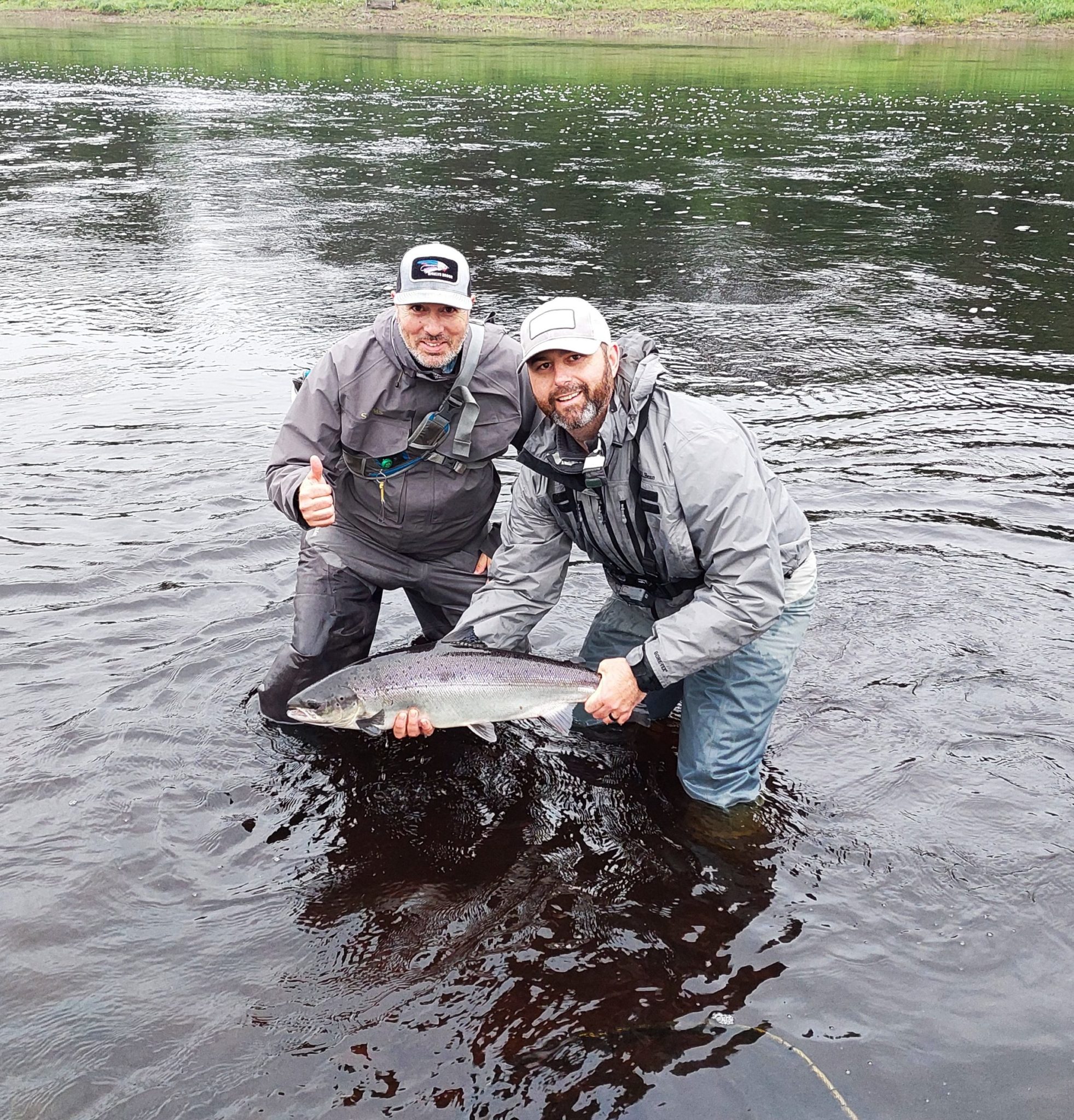 Wayne O’Donnell, manager of Rocky Brook’s fishing camp said that it has been a great season so far, and that the water has remained cool.  Many new salmon arrived in their pools with the recent rain.  Hot flies are the very traditional White Tailed Green Machines, Shady Lady, and a Brown Bomber.

Keith Wilson said that prior to the big rain of July 9 they had excellent fishing.  As the water is dropping and clearing up a lot of salmon have been running upriver, but it is hard to get them to look at a fly.  He feels that from here on in fishing should be good with the river back down to more or less normal heights.

Brock Curtis of Curtis Miramichi Outfitters took a ride up the Bartholomew after the big raise started to drop off and saw salmon rolling in a number of places.  Everyone coming into the shop has good fish stories and is excited about the numbers of fish in the river.

Byron Coughlin of Country Haven reported that before the rain they landed 25 salmon in a 2 day period.  The lower river was quite high and dirty, but that they were beginning to fish again on 7/13.  Fishing later in the week was very good, and they were seeing a lot of fish.  He also mentioned rolling a lot of not taking fish in Brophy’s on the lower Cains.  The guides thought the fish were on the move headed up river.  This may well be the year that pools further up the Cains will have some good summer and early fall fishing.

Eddie Colford, manager at the Black Brook Salmon Club said that fishing has been very good there with large numbers of fish holding in their water previous to the big rain.

Jason Curtis has had terrific fishing in Blackville just fitting it in mornings and evenings, and he is seeing a lot of fish.  Ashley Hallihan, whose family water is just up river from Campbell’s in Blackville, had some pictures on Facebook and described recent fishing as better than anything they have had in many years.

There is a feeling that all these early run fish are hot to move up the river quickly, and certainly some do.  Jason Curtis recently caught a 12 pound salmon in Blackville, though, that had been tagged in Millerton two weeks earlier.  That’s a long time to cover 15 miles. 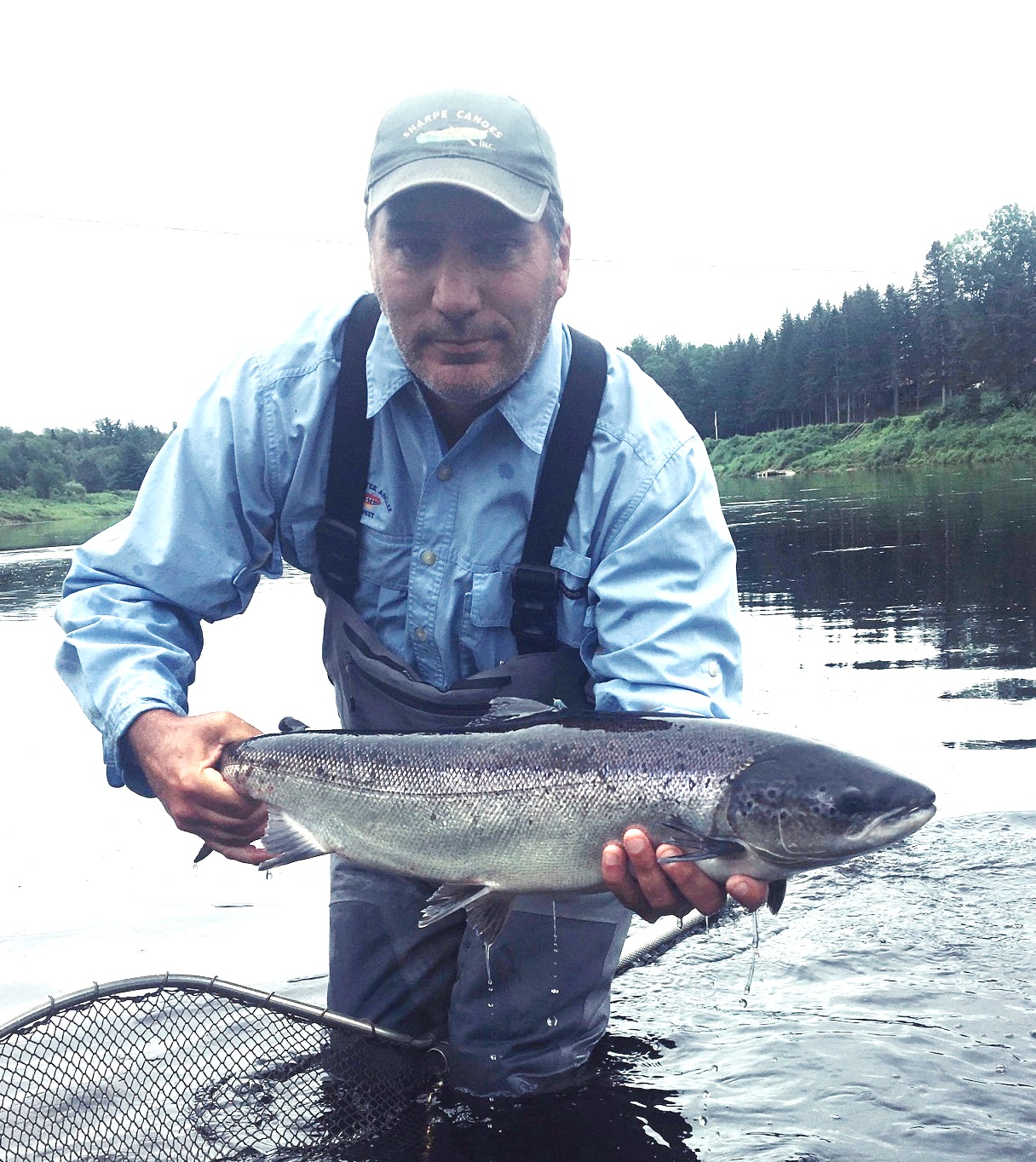 Dawson Hovey was at Black Brook just before the raise of water, and found a lot of fish.  He is a dry fly enthusiast, and a light rod advocate, and did well landing a couple of large salmon of an oversized orange bomber fished on 6-weight.

In recent summers, 2020 being a perfect example, experienced observers were used to seeing schools of salmon hustling up the river at daybreak and again just before dark.  During the day the fish just all sat in cold water holding pools, and if fishing is allowed at all the fish refuse to take well.  With temperatures and water height in the river being much better this July these fish can often be found spread out, and holding in various pools all along the river, and that provides excellent fishing opportunities.

The excellent fishing makes the current 2 fish catch and release limit more frustrating than it would otherwise be.  Jason Curtis has told me several times how difficult it is when he finds great fishing, to catch two fish in 15 or 20 minutes, and then have to leave the water for the day.  Given the extremely low release mortality, especially when fishing with barbless hooks, the conservation benefits of limiting anglers to two releases a day seems unnecessarily restrictive.  Seeing the good numbers to date we would hope that DFO could change these regulations for the fall fishery.

We asked Rick Cunjak, retired professor and salmon expert from the University of New Brunswick for comments on this year’s run to date.  He shared the observation that the early run may not speak for the whole season, and that while the SW numbers and anecdotal evidence is excellent the NW returns to date are more lackluster.  Unfortunately, he said, we don’t have outgoing smolt estimates for recent years, and when looking to understand sea winter survival that is where you have to start.  The MSA is working, starting this year, to resume smolt counts.

Rick also postulated about the likely increase in the importance of repeat spawners to the Miramichi’s salmon runs.  As evidenced by the large number of well-mended kelts this past spring, that segment of the Miramichi population is doing well.  These are valuable spawners, and Rick felt that they are better able to survive the migrations in and out of the river than smaller fish.  He was all smiles with a picture of a big, early run salmon that he had caught, and like the rest of us was happy to see the uptick in the numbers.

Last, while full details are supposed to come out early in the week, Premier Trudeau has said that Canada will open to US visitors with full vaccination sometime in August, and other countries will follow in September.

Check out the Salmon Report on my website.  I try to keep it updated with the latest information on the catch, fly selection, and conditions most days of the season.  Select from the menu at the top of the home page. 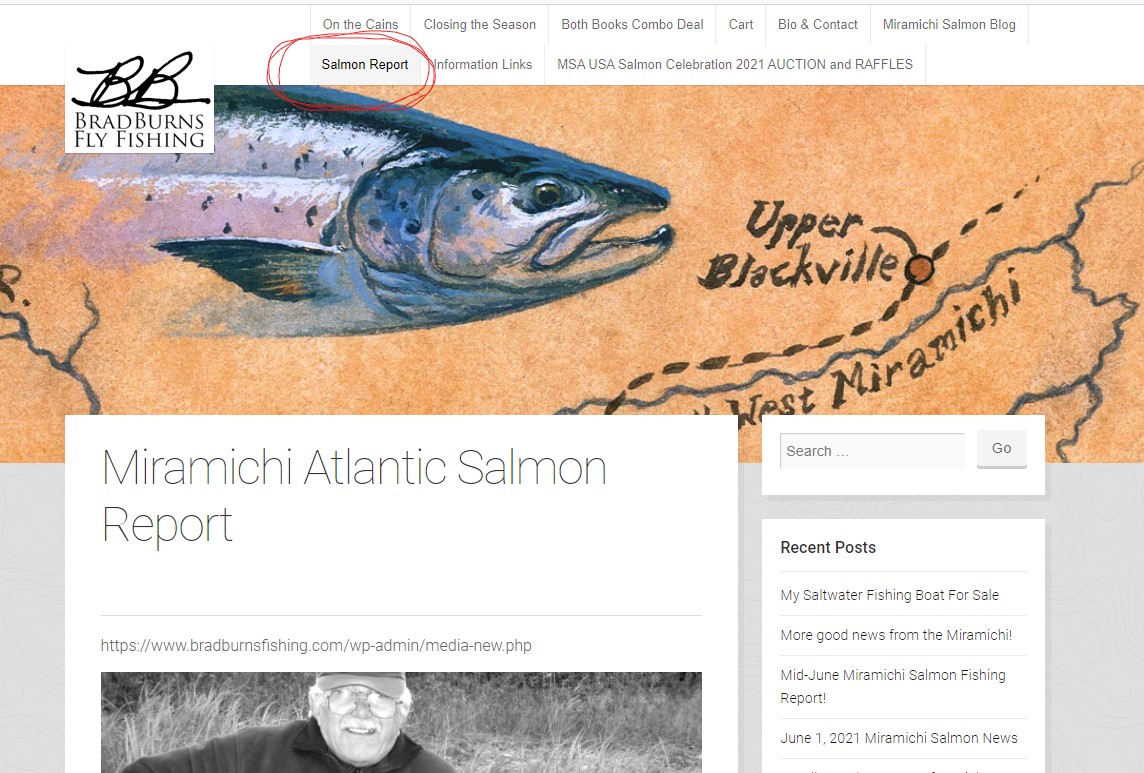 13 Comments on “Just how good is this year’s Miramichi River salmon run?”