More good news from the Miramichi!

If you have been following my earlier blogs on this season’s run of salmon, and liking the good news, then you will be even happier after you read this report. 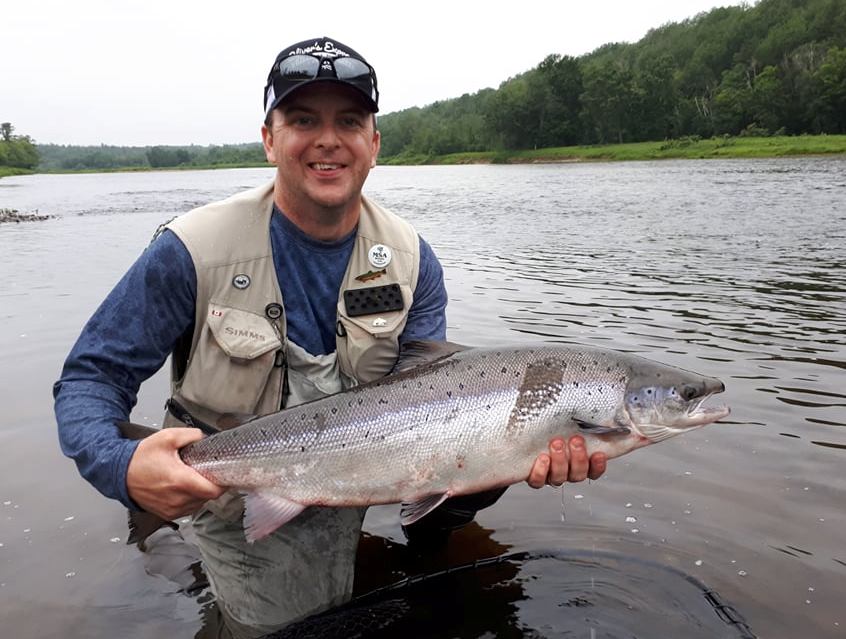 Yes, it has been hot in New Brunswick, though as Mick Jagger says, “it’s all over now.”  The temperature never did get nearly as hot as New England, and it has been dropping steadily since the afternoon of June 29.  On top of that there were several moderate rain events to help mitigate the warm weather.  The forecast for the next few days is for a much cooler than normal period, and with some amount of rain most days.  In short it sounds ideal.  Both Jason Curtis and Eddie Colford at BBSC report not seeing any dead or distressed fish.

With inter-Province travel only recently liberalized, and with the border to the U.S. still closed, fishing pressure has been light.  Those fortunate enough to get on the river, though, have continued to find some good fishing.   Randall Connors’ Facebook posts of fish caught daily in his pool in Upper Blackville are enough to make you drool.  The good fishing has taken place from Quarryville to Rocky Brook and probably beyond.

Tyler Coughlan and sport with the talk of the river. One of the horde of grilse that has invaded the SWM.

I’ve had good reports from Country Haven, Jason Curtis at Campbell’s, Eddie Colford of the BBSC, and others.  I had planned to contact a couple of the fly shops and other lodges, but when I got the Millerton barrier counts today I decided to hustle right into production with the good – no fabulous – news.  I will say, though, that I heard from Rocky Brook with their guests just beginning to fish that there are fish in all their pools and far up the brook itself.  The grilse catch is running three to one over salmon, and there are plenty of salmon.

Let me build up to it.  First, the report from the Dungarvon barrier which is being managed for the Province by the Miramichi Salmon Assoc.  The Dungarvon is a large tributary of the Renous, which in turn is a tributary of SW Miramichi about the same size as the Cains River. 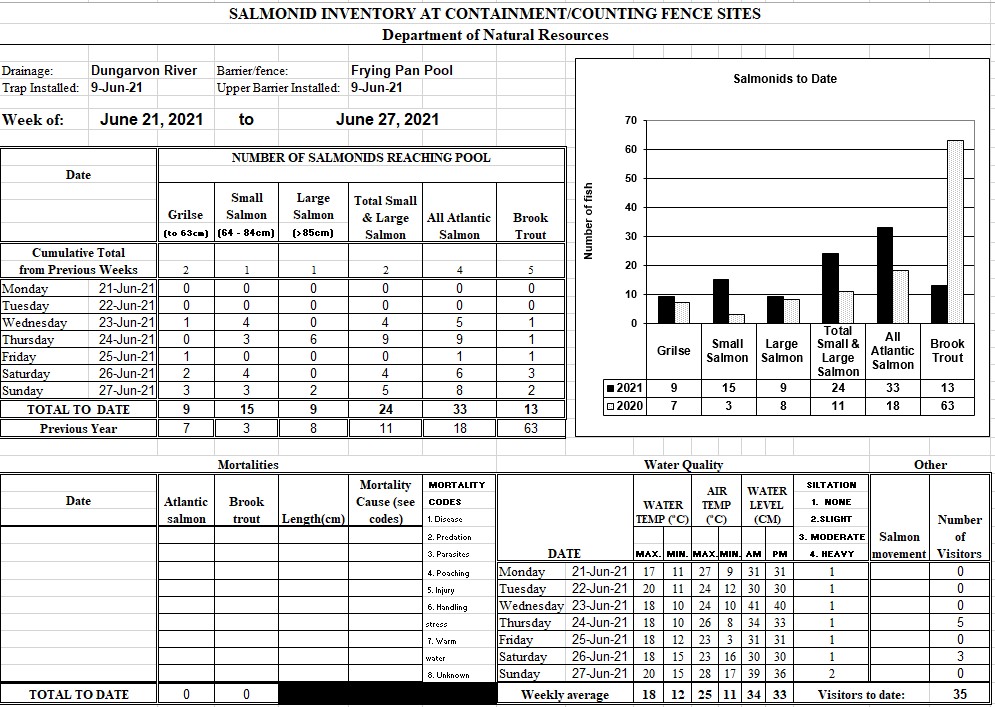 The total for the season through Sunday, June 27 is 33 which compares to just 18 at the same time last year.  Perhaps most uplifting in this information is that the small salmon count is 15 compared to just 3 last year.  These fish are predominately 2 MSW maiden spawners, and they are females that will be very important spawners this fall.  Not only is the large number of these fish wonderful news, but they further validate that last year’s grilse run, which was not measured, was as good as we thought.  These 2 MSW hens are essentially the female component of that run – the grilse being largely the males.  We still have a long way to go for the season, but it is a very strong early showing.

Second are the trap numbers at Millerton and Cassilis through June 30.  Fish would have been counted today at lunch time, and DFO had them posted by the middle of the afternoon!

Millerton is run by DFO and they report only grilse or salmon.  62 salmon have been captured in the trap since June 30.  Unlike Dungarvon this trap is not a barrier, and it captures only a portion of the run, about 5% of the salmon.  That means that around 1,200 salmon have already entered the SW Miramichi.  The number 62 compares to 23 in 2019 and 31 in 2018.  It also compares to 56 as the average of 2008 to 2012, and it is more than twice as large as in any other similar period dating back to 1998!  Now it is possible that we are stealing with this early spring from the run that we should have in July, and we shall just have to wait to see if that is true. 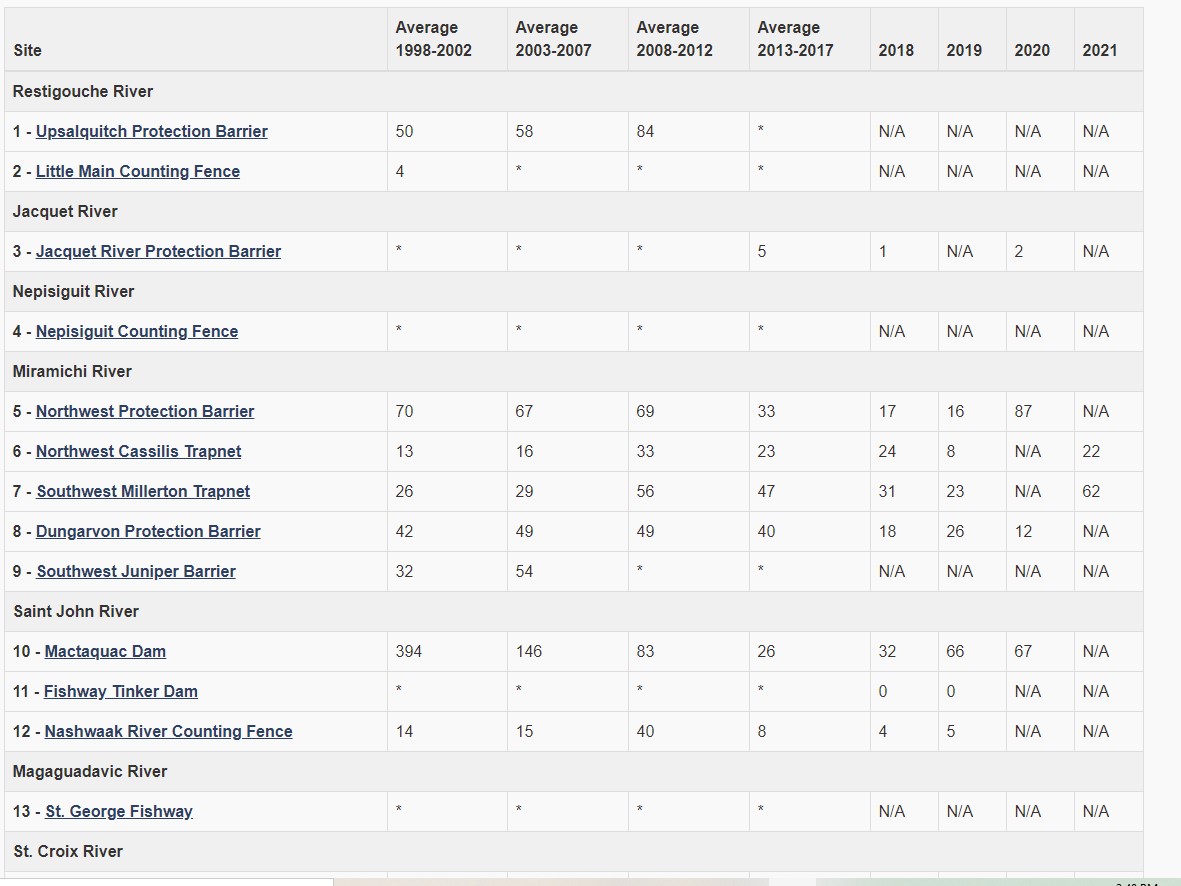 The SWM salmon numbers are on line 7. The NWM is just above it. 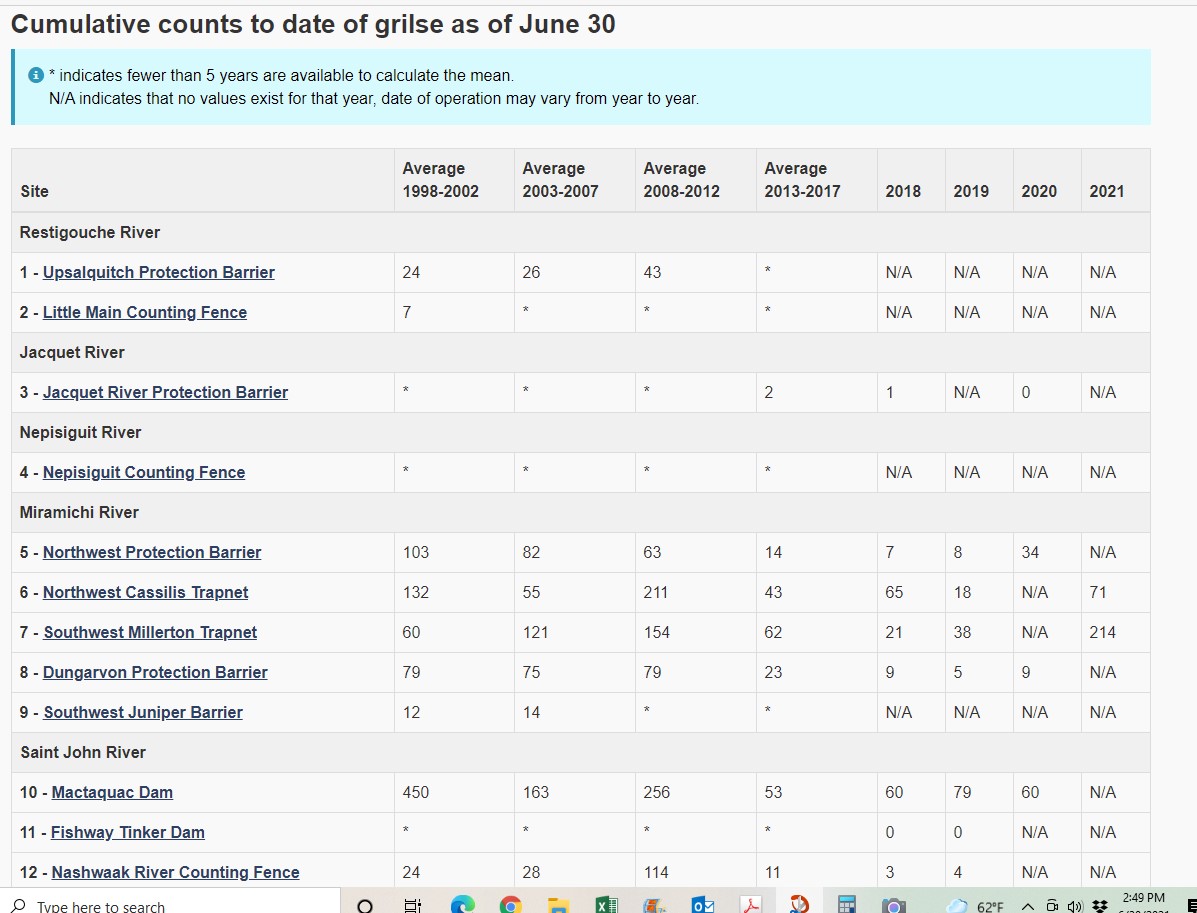 The numbers at Cassilis for the NW Miramichi aren’t bad, but they are only slightly better than most recent years and well below the better years of the early 2000s.  If you are so inclined this link https://inter-j01.dfo-mpo.gc.ca/asir/report/count will take you to the site where these statistics/graphics come from.  There is also more interesting info on there for other rivers as well.  Most of it isn’t updated just yet.  The DFO staff probably couldn’t wait to post the good news from the SWM, and I don’t blame them.

That’s probably as much info as any of us can absorb for right now.  What we really want is to be driving into camp right now.  If you are from the U.S. or Europe, that ain’t happening right away.  When, who knows?  Hopefully Mr. Trudeau is waiting to give us all some surprise good news.

PS  Don’t forget, the regulations call for barbless hooks and a limit of two released fish per day.

16 Comments on “More good news from the Miramichi!”