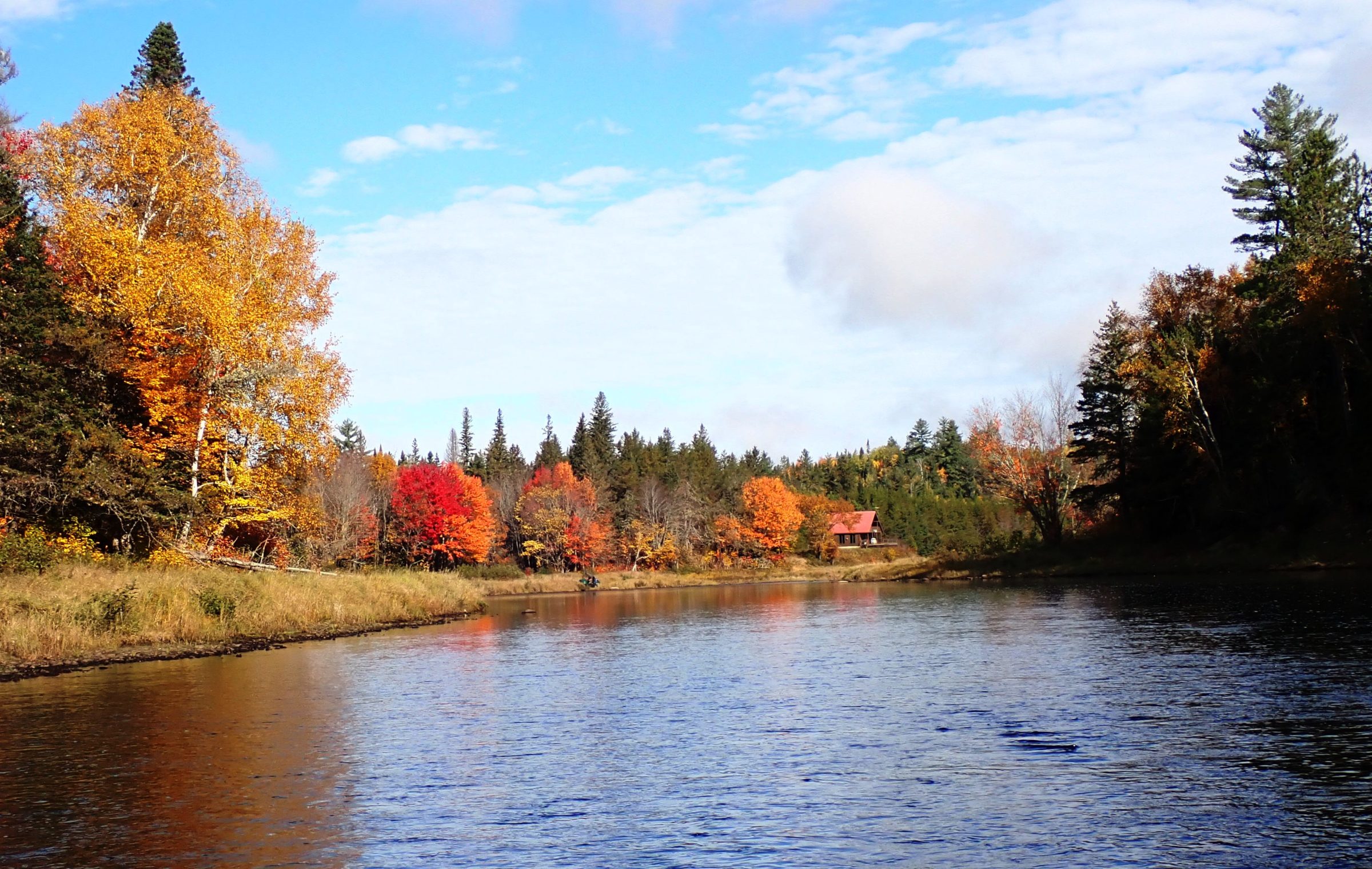 Looking downriver at the Mahoney Brook camp on the next to last day of the season. There were lots of fish in the Cains this fall, but the water was very low. 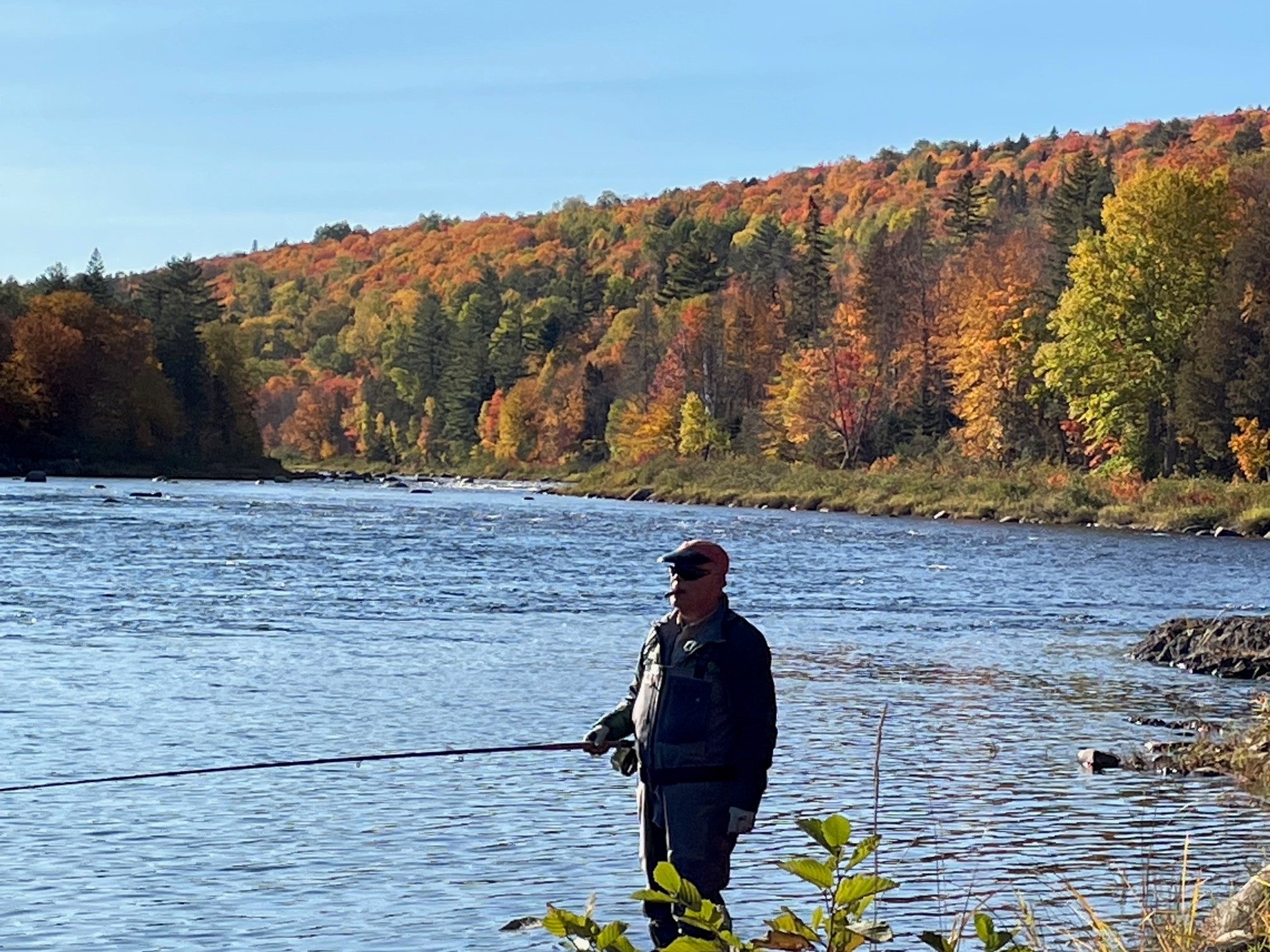 Roger Earle fishing out of Upper Oxbow Adventures on the LSW Miramichi.

I spent the last 5 weeks of the salmon season in camp on the Miramichi fishing both the Cains and the main river.  My overwhelming reflection on that time, is how great it felt to have been able to return to Canada, and go salmon fishing.  Of all the fishing I’ve done anywhere, there is none that I prefer to fishing for Atlantic salmon in New Brunswick.

I’m going to cut this season wrap-up blog in half to keep it from being too long.  This first part will review the fall salmon fishing.  The second part will come in early November, and it will review the run for the entire season including an analysis based on the trap and barrier results. 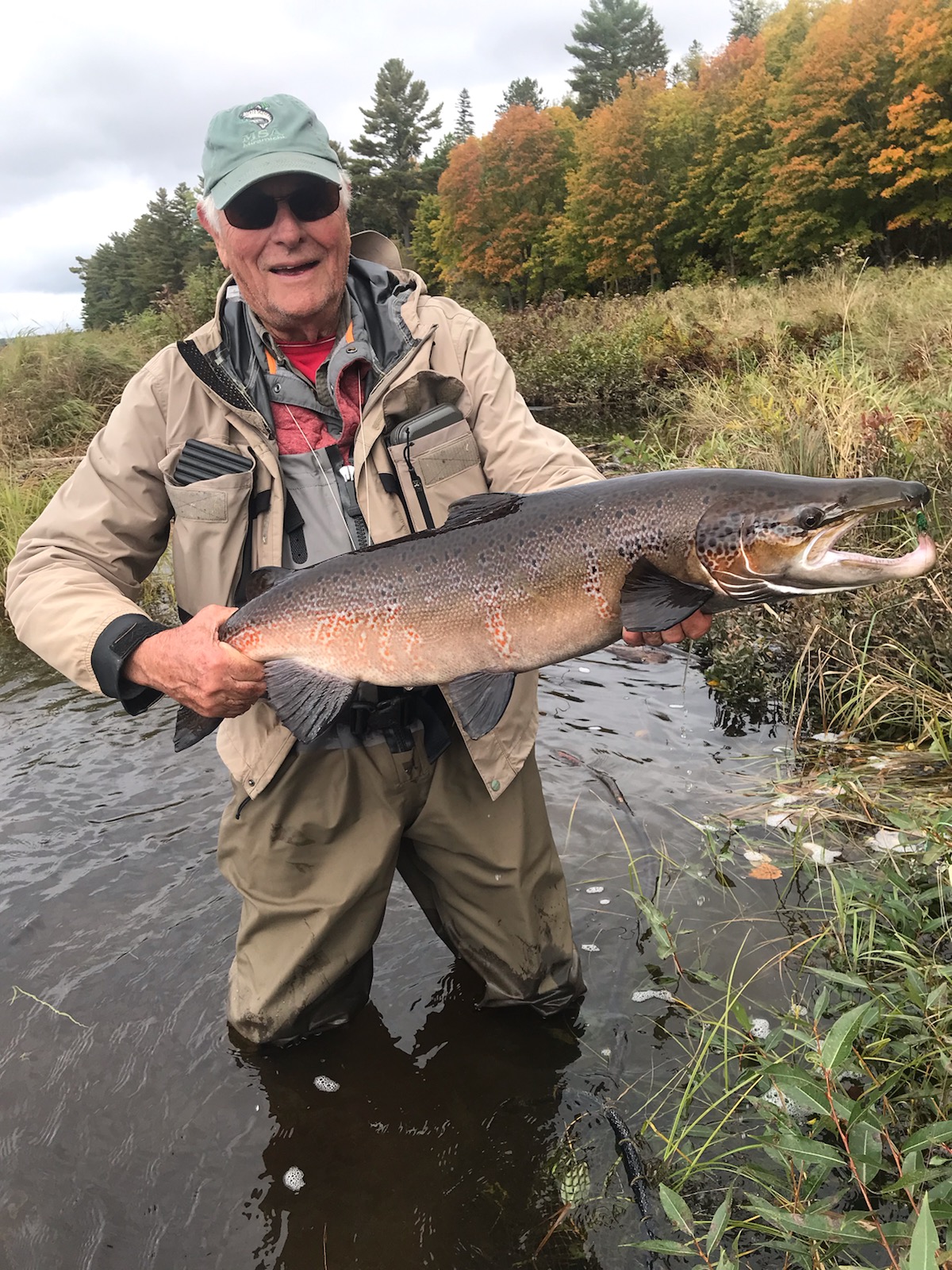 There were a number of years in the early 2000s when the hot weather of summer dragged on into early September, and it was close to mid-September before the river really cooled down and fall fishing began.  Over the last few years, though, the river seems to have substantially cooled down before the end of August, and in several summers – such as 2021 – we received quite a bit of rain.  My old friend Willy Bacso used to say, that there are just so many fish to come, and if they come early on repeated raises of water, then they will be all gone upriver before the end of the season.  Probably to a large degree that was the case with the fall of 2021.

Check out this graph below of water levels on the Miramichi River in Blackville.  This shows the height of water in meters over the course of the 2021 salmon season. 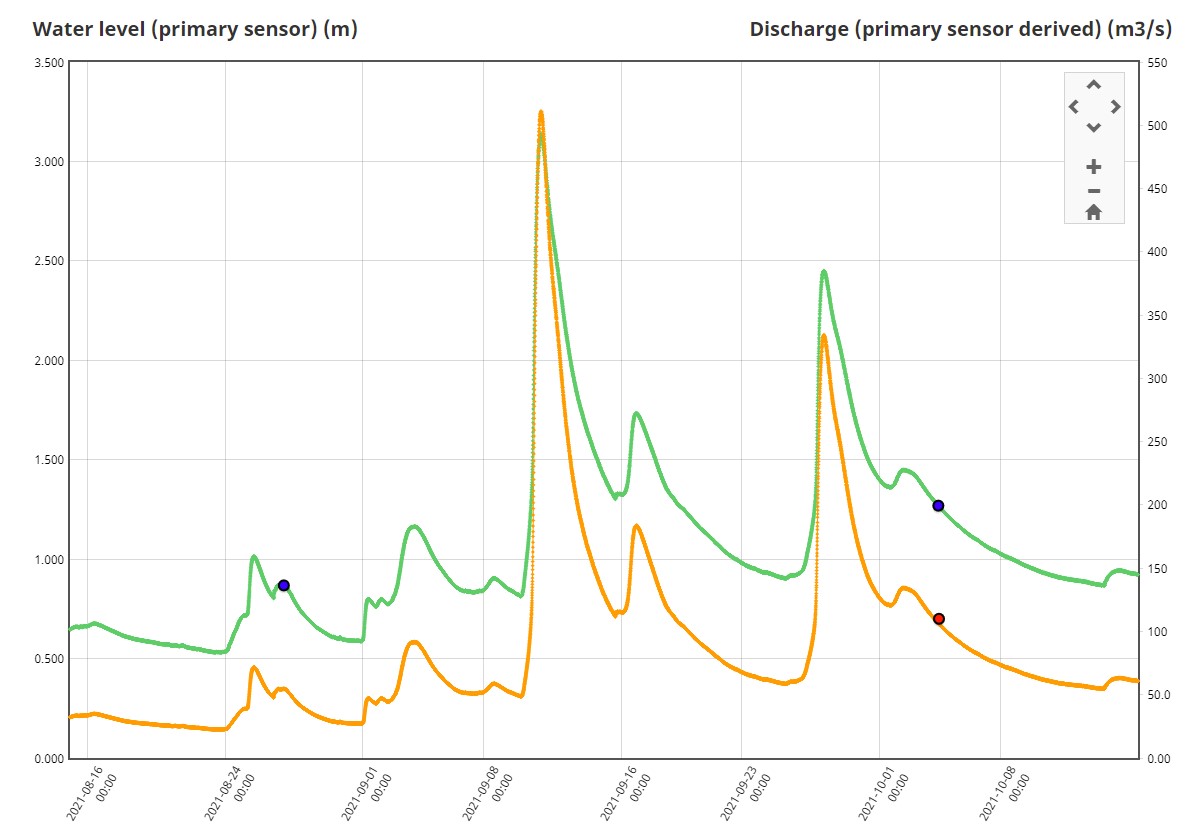 2021 Blackville, Miramichi water heights in green. Note the .5 reading in the left axis. 2020 hardly saw a day in the fall with water above that height.  Anything above .8 meters or so is relatively high water.

The last time in 2021 that we saw a typical summer height of water was August 31st when the gauge registered .59 meters, and throughout all of August it was rarely anywhere near that low.  In July or August that water height would find fish holding in pools along the river that offered some amount of cool water buffering.  The difference in 2021 was that repeated raises of cool water had carried many of the fish further upriver than they would normally have been at that time.  This left fewer fish to populate downriver pools in the fall, and the greater heights of water encouraged them to just keep on swimming instead of resting in a lie where anglers would have a crack at them. 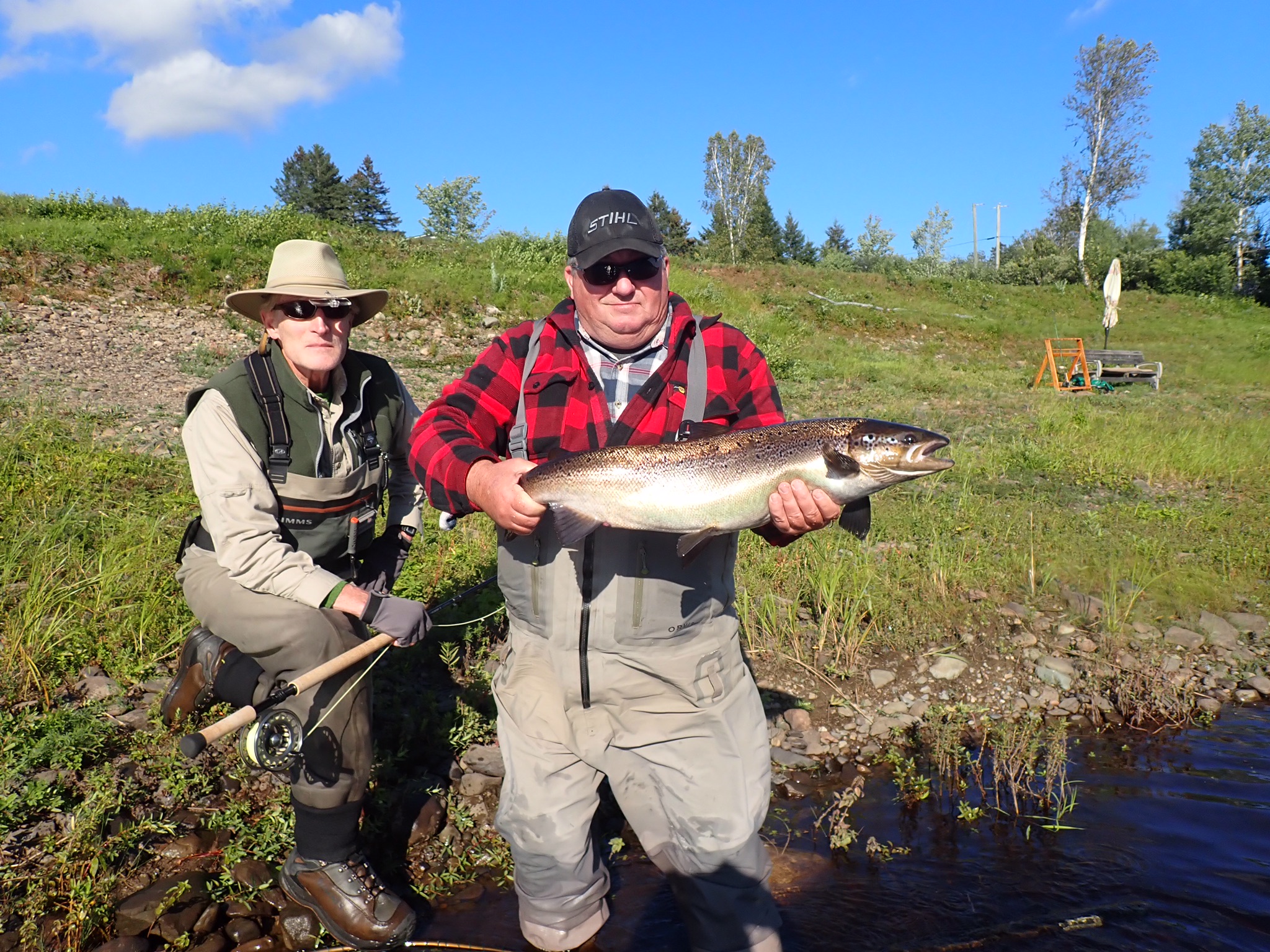 A nice salmon from Campbell’s on September 7.

On August 31st the maximum water temperature was a warm, but not untenable 23C or 73F.  By September 3rd the height had risen to 1.2 meters – a two foot raise – and the water temperature was down to 16C or 60F – excellent.  Two couples led by Graeme McKinnon who had purchased a fishing trip to Campbell’s Pool at an MSA auction the winter before showed up to fish.  It was excellent timing.  In 2 ½ days of fishing with guides Jason Curtis and Darrell Warren they hooked more than 30 salmon and grilse and landed 14 on the Miramichi and lower Cains River.  Right place, right time!

I arrived on the 6th at mid-afternoon and had time just to fish with Jason for an hour or so, hooking two salmon and landing one of them.  The next day, with the water down to just .823 meters I waded Campbell’s Pool and found fish here and there on various lies.  I  hooked three more that got of and landed a grilse and a 16 pound salmon.  It was the best fishing I was to have all fall. 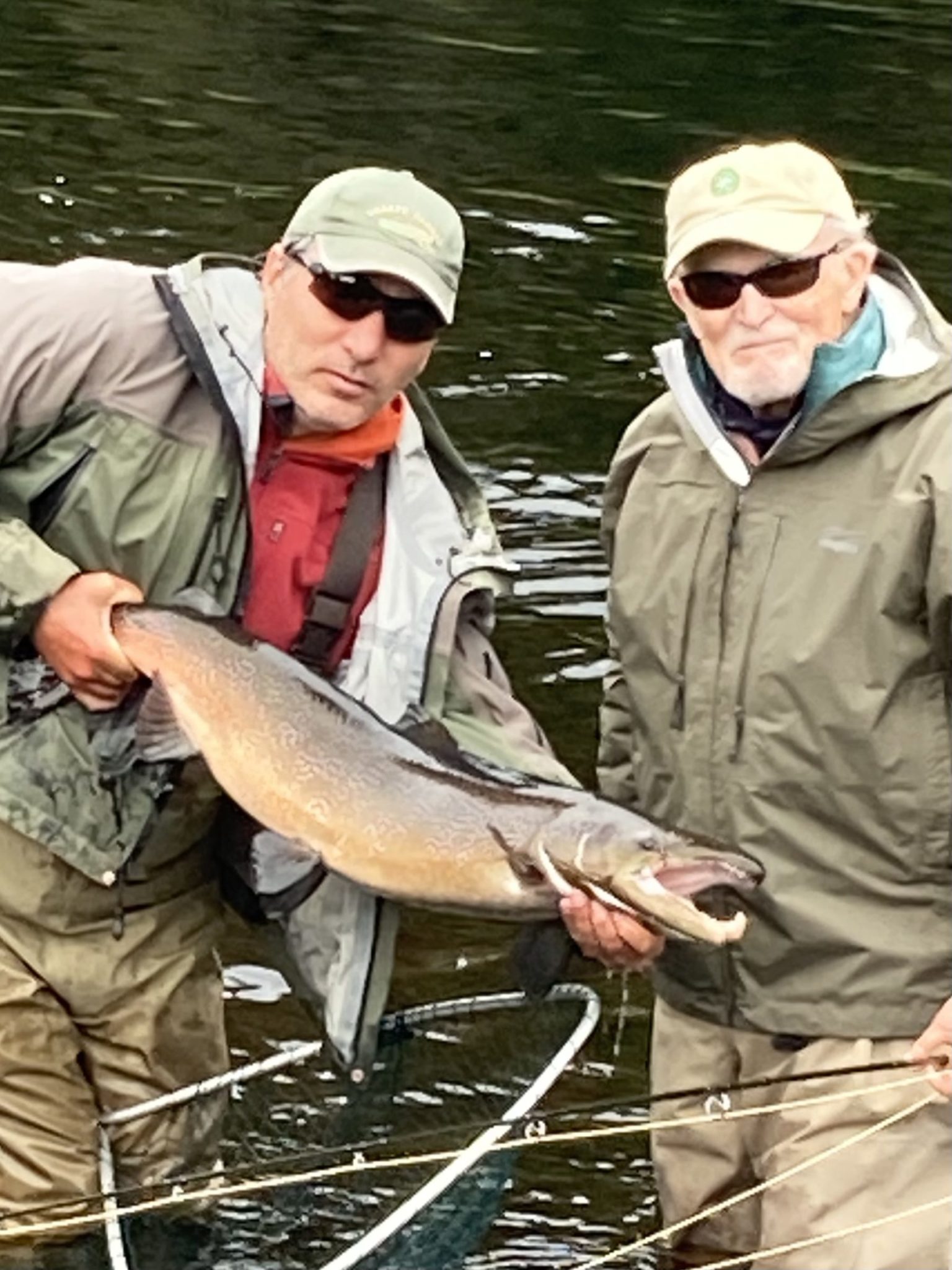 Jason Curtis and Duncan Barnes admire one of the few MSW Cains cockfish that we caught.

It poured rain on September 9th and by the 10th the river was rising and on its way up to 3.2 meters – a 2.5 meter raise, or approximately 8 feet!  And the raises just kept on coming.  The river was up again on the 17th, and another big raise came on the 27th.  As each raise settled down we saw fresh fish, but less each time.  The water never got below .87 meters again, and the best you could hope for was a fish to pause on a lie for a few minutes as it swam through.  The combination of weak numbers of new fish and high water made for poor catching on the Miramichi.  Fish also traveled well up the Cains earlier than normal.  We caught our first fish of the season at Mahoney Brook, 21 miles up the Cains, at the early date of 9/17.  Karl Wilson reported that they caught salmon up above Hopewell lodge – another 20 plus miles upriver – the last week in September.  Many years there are no salmon seen that far up until the middle of October.

The difference on the Cains was that the raises were much smaller to non-existent.  The headwaters of the Cains and the Miramichi are far enough apart so that it is possible for one to get a soaking rain, and the other hardly a drop, and it does happen.  The Cains missed the large raise of September 27th almost completely.  When the fish were normally moving to the upriver pools for the traditional late season Cains fishing, the height was so slow that there was little current flow in the pools, and it was very difficult to catch them.  Jason Curtis said that it was the double whammy – too high for good fishing on the Miramichi and too low on the Cain! 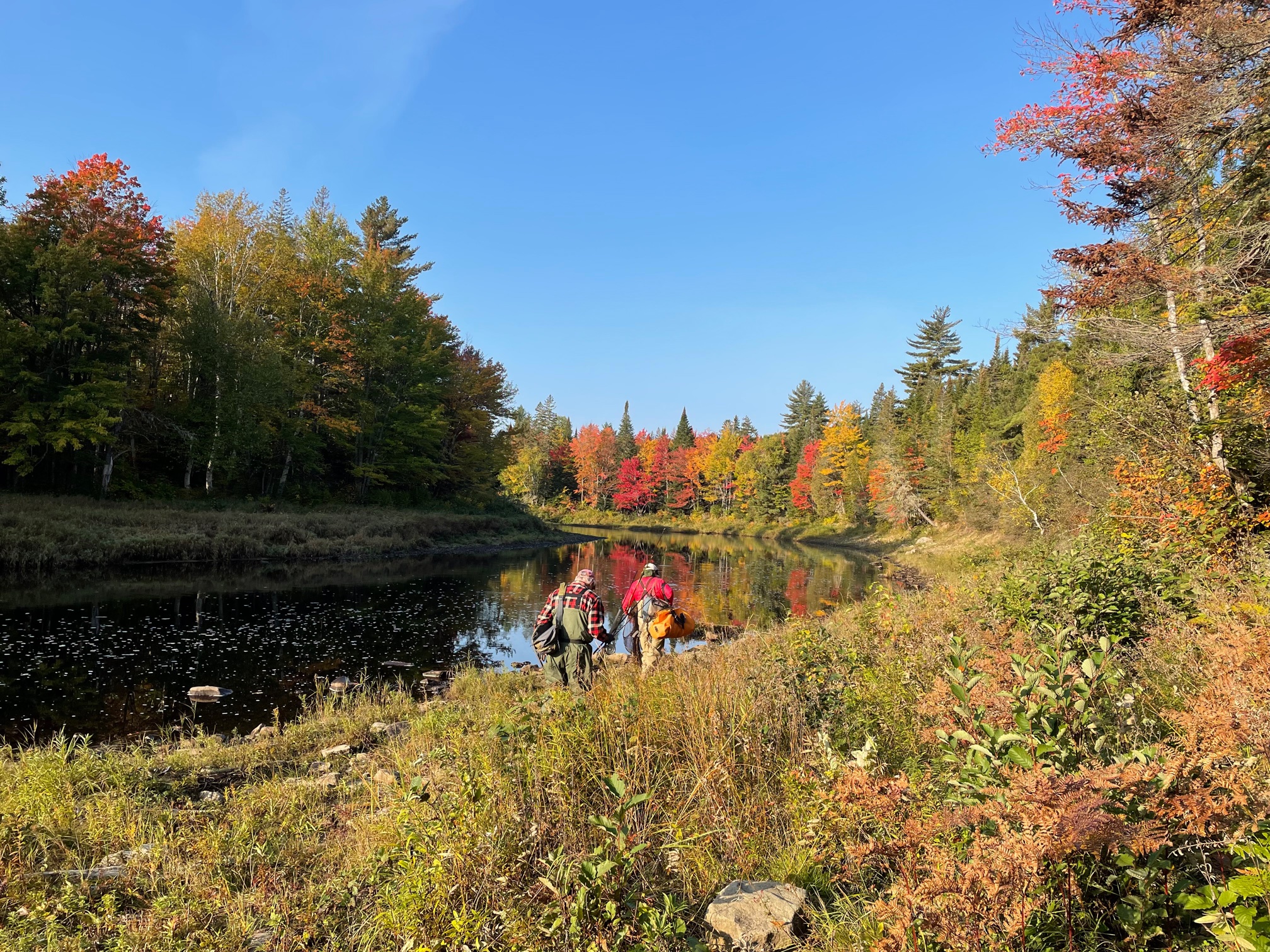 Beautiful, but too sunny for good fishing, especially in the low water. Photo by Jesse Robbins on the Cains River. 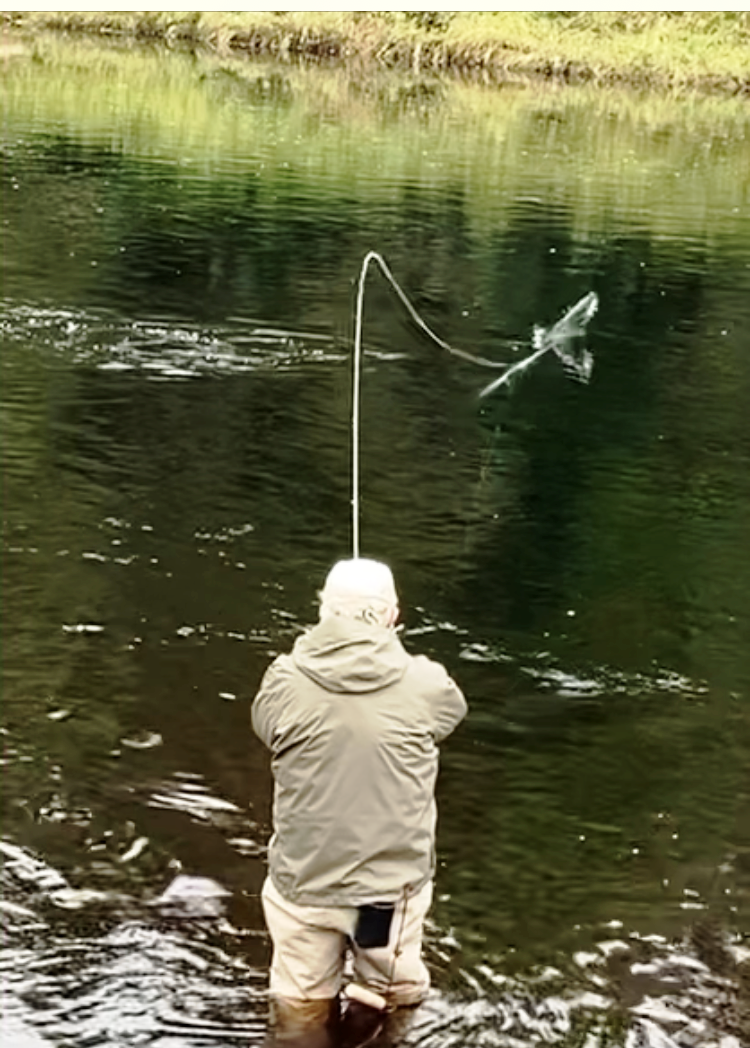 Harvey Wheeler took this remarkable photo of Duncan Barnes playing a cock salmon just as it began to jump.

That said, the fishing had its bright moments.  All four members of the  McKinnon group, plus Topher Browne, Pat Boland, Colles Stowell, Duncan Barnes, and myself all landed nice double-digit salmon, and others were hooked and lost. Of the 39 salmon and grilse that we landed in September and October, 14 were salmon and 25 grilse.  Large male – cock or buck salmon – were conspicuously lacking.  That seems likely to be a function of poor grilse returns for the last few years, since large cock salmon usually begin their careers as grilse.

My quick take off on an Ally’s Shrimp. The salmon liked it just fine.

The list of successful flies for us held no big surprises.  I only saw water at 49F just one time while I was there.  It fairly dependably stayed in the mid to high 50Fs right to the end.  Because of that we hardly fished the large, streamer type flies such as the October Killer this entire fall.  I did catch a few on an October Killer Jr. tied on a #4 streamer hook.  Another fly that worked out well for me was a simplified play off an Allie’s Shrimp that I made my first day in camp – because I couldn’t find an Allie’s Shrimp in the size that I wanted – using red and black barred squirrel tail instead of bucktail, eliminated the golden pheasant crest, used black bear for the wing, and made the body of orange or in some cases black and orange mohair.  We did catch a few in the slow water on the highly mobile marabou or slime fly patterns.

On October 2nd, well up the Cains, I had a bump from a salmon on my Allie’s Shrimp variant, but it wouldn’t come back.  I have had luck before, mostly during the summer season, in these situations by going down to a much smaller fly – usually black.  I tried this, going to a number 8 Undertaker with a fluorescent green butt.  I caught the salmon on the first pass, and in a few minutes went back upstream to fish that lie again, and using the same fly caught a grilse.  I guess the moto would be to never go out on the Miramichi or Cains without your small black flies – even in the fall. 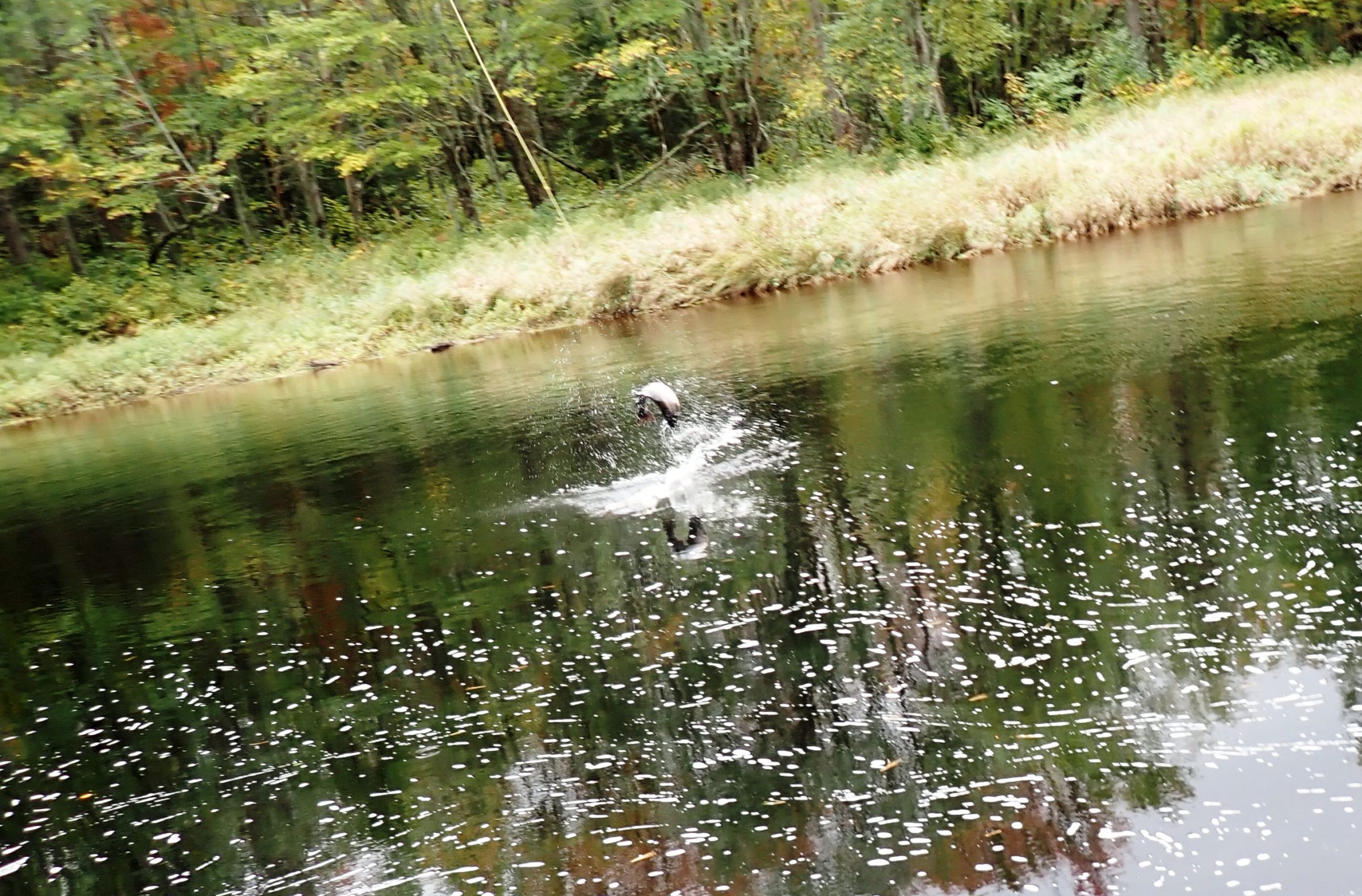 A Cains salmon leaps. This one stayed attached to end up in the net. 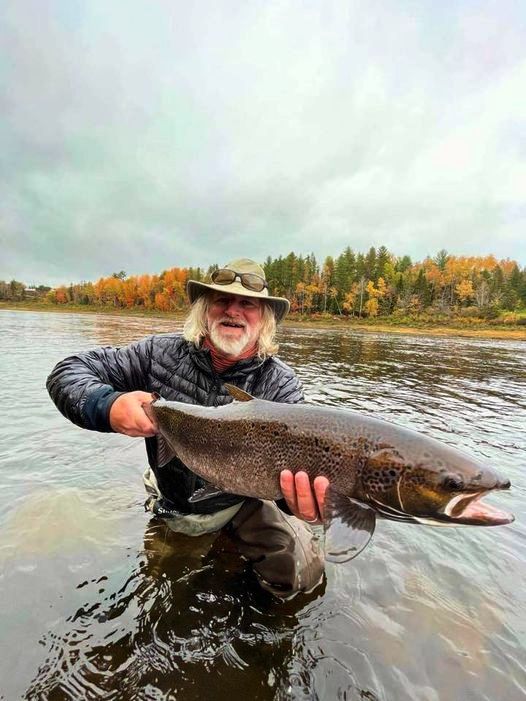 Country Haven angler Terry Roemer from NJ with a fresh late season fish from the Rapids section of the lower SW Miramichi.

As the season came to an end we were still seeing a fairly steady trickle of fresh salmon on the Miramichi.  In fact Jeff Curtis fished in Blackville the morning of the last day and saw 14 different salmon roll on their way up the river.  Country Haven’s anglers had some success then catching fish down in the Rapid’s section too.

The Cains experienced the tiniest increase in water height from some thunderstorms just before the end of the season, and I hoped it would freshen up the good numbers of fish holding in virtually all of the pools we normally fish, but it didn’t work out that way except for one final grilse from the home pool at Mahoney Brook. 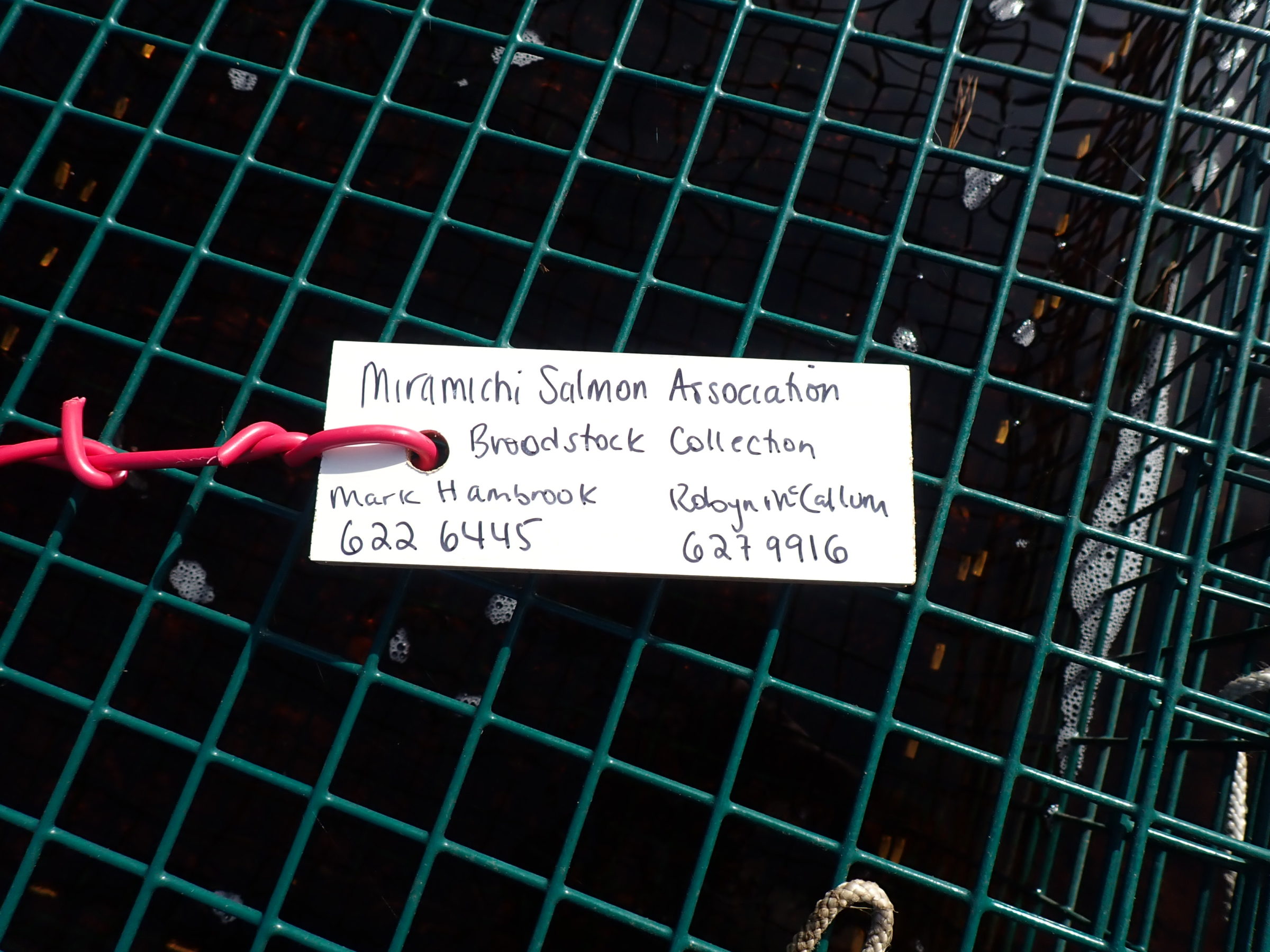 Tag identifying a brood stock collection cage on the Cains.

Campbell’s, Black Brook and Country Haven teamed up to angle 6 hen salmon and 8 males for Cains River broodstock for the MSA.  Those fish will be spawned out over the next week and released live back into the river.  The results will be many thousands of first feeding fry to stock next May and June in areas of the Cains that were shown to have low parr counts this past summer. 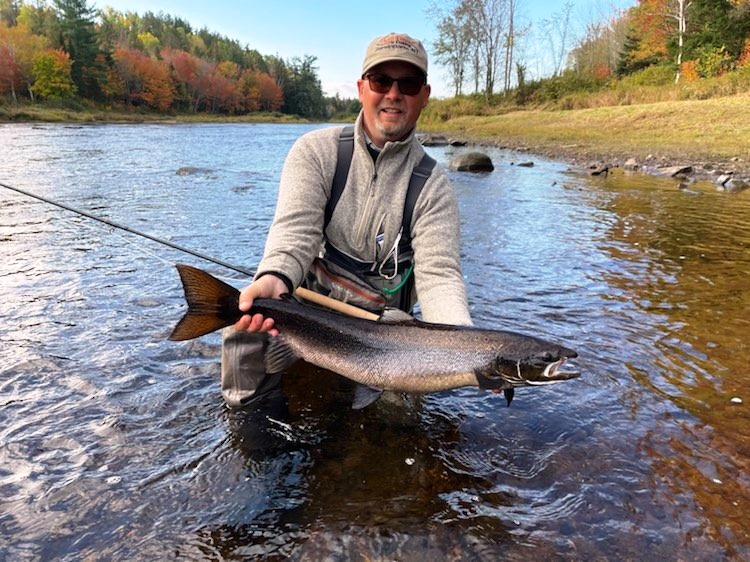 I communicated with Upper Oxbow, Wilsons, Black Brook, Rocky Brook, and Country Haven after the end of the season.  They were all grateful to have had the borders open and resume more or less normal operations for the fall fishing season.  They thank their clients for making the trip north.

With Covid still an issue in NB for large gatherings, the MSA was forced to postpone its important Fredericton fundraising dinner to honor the Wade family.  The MSA has gone forward with a large online auction featuring 100 items including virtually everything to do with salmon fishing: trips, flies, tackle, clothing, etc.  Here is the link to the auction. I hope you’ll join me in doing some bidding, or in simply making a donation to this organization that is completely devoted to working for the interests of Miramichi salmon and salmon angling. 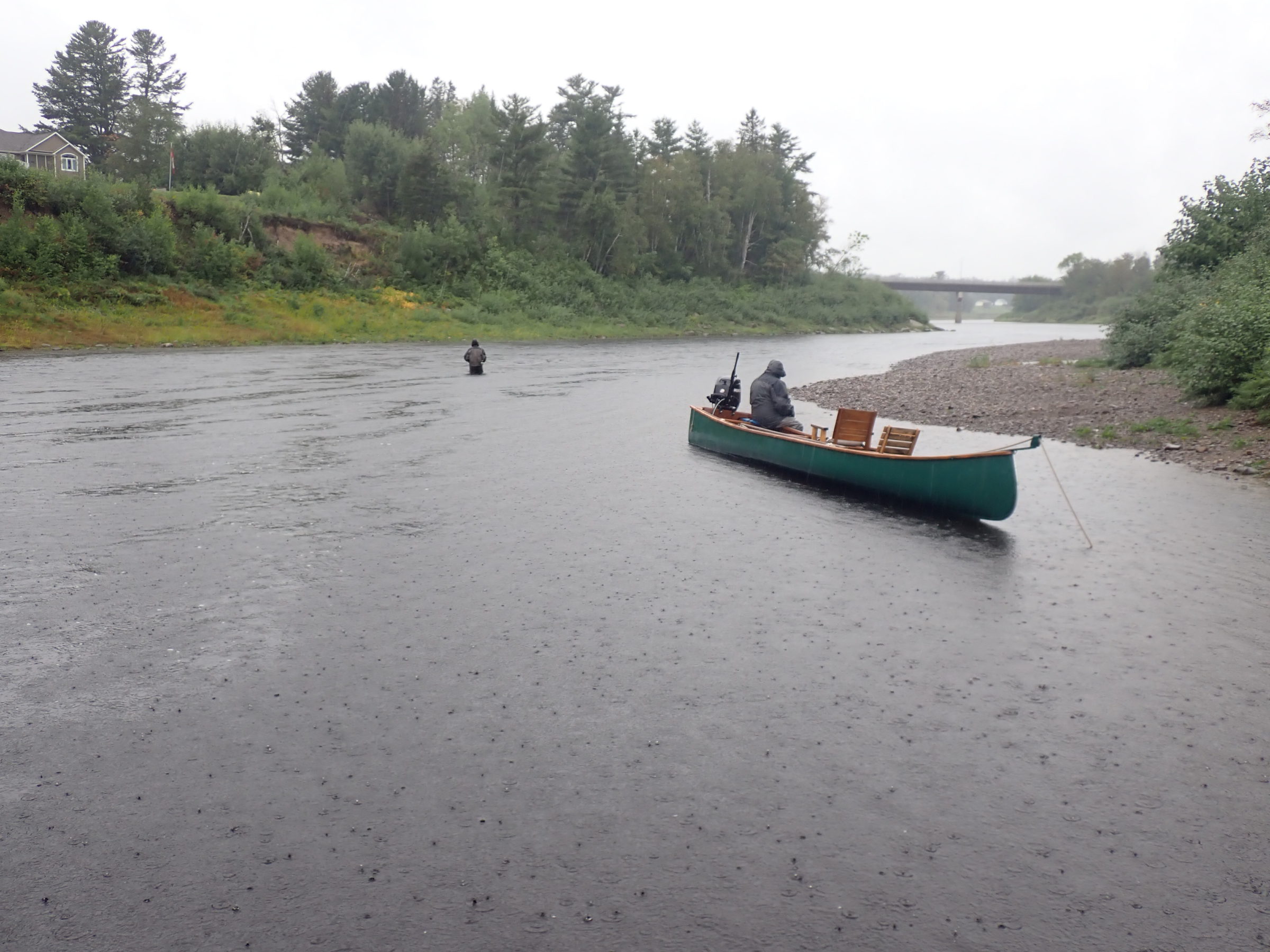 Consistent rain and resulting high water made low-water pools like Doctor’s Island practically useless this fall – but there is always next year!