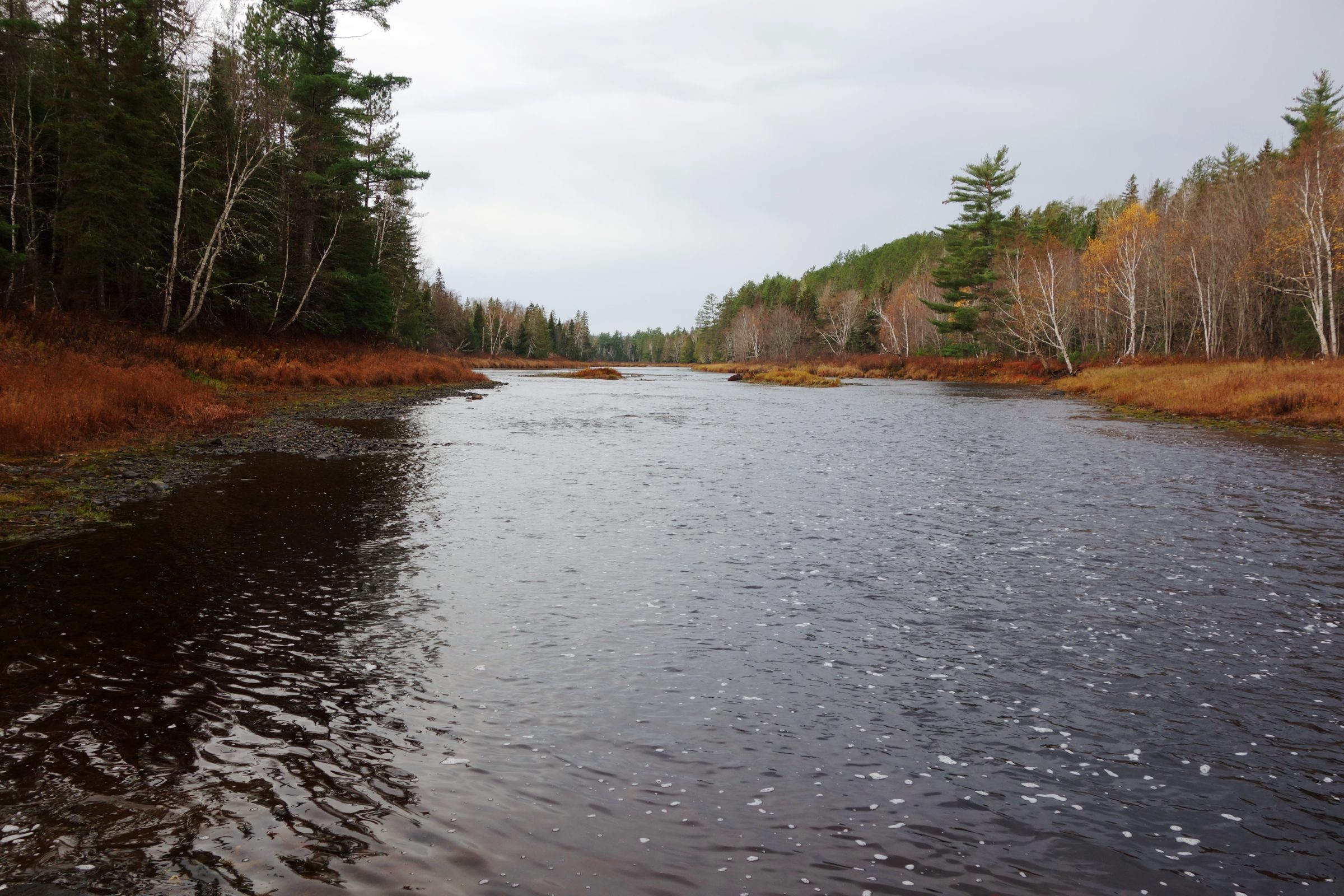 Salmon season is over on the Cains, but this picture taken a few years back illustrates the wild beauty of the river at spawning time.

The final counts for the season on the Miramichi River and its tributaries are taken on October 31.  These include the fish counting traps in Millerton and Cassilis manned by the federal Department of Fisheries and Oceans DFO, and the barriers on the Northwest and the Dungarvon that are run by the Miramichi Salmon Assoc for the New Brunswick Department of Natural Resources DNR.  The traps catch a varying percentage of the run that ranges from about 5% for salmon on the SWM, and closer to 10% for grilse on the NWM.  The barriers theoretically catch 100% of the fish that make it to them, but there are substantial numbers of fish that spawn downstream of the barriers and never run that far. 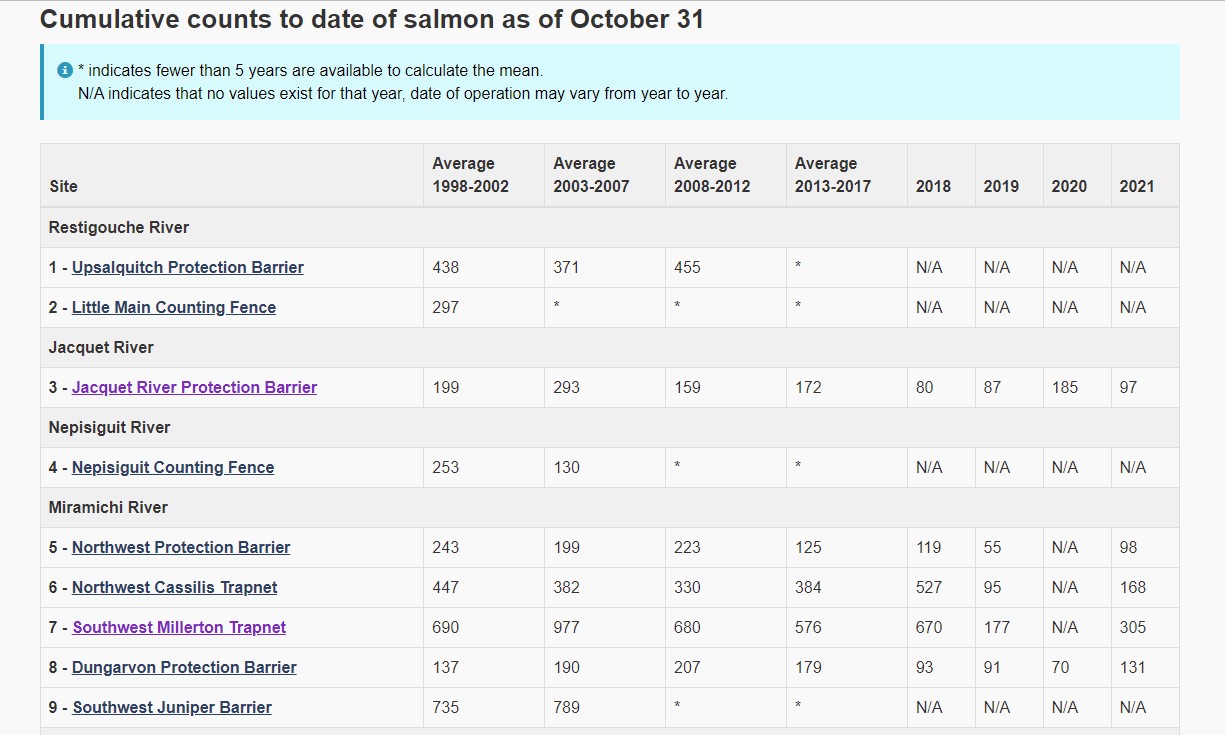 There aren’t a lot of other counts to compare these statistics to as far as NB salmon rivers go, but one is the barrier count on the small Jacquet River .  The Jacquet averaged 206 salmon over 1998 to 2017, and was 97 in 2021.  This is also a decline of 53%.  Anecdotally – but by excellent sources – the Miramichi run was observed to be greater in 2020 than 2021, and that was certainly the case with the Jacquet where nearly twice as many were counted in 20 as in 21.  It also may be important to note that 2021 was by no means the lowest on record in any of these rivers.  2021 was up over several recent years.  As mentioned in the previous paragraph the SWM was 177 in 2019, and the Cassilis trap was just 95.

With grilse the SWM went from a 1730 average between 1998 and 2017, to 939 in 2021, a decline of 46%.  The NW suffered a larger decline from an average of 958 to 368 or 62%.  The prevailing opinions seem to be that whatever problems we have in the ocean are harder on fish during their first year at sea than in later years where presumably their size allows them to forage more effectively. 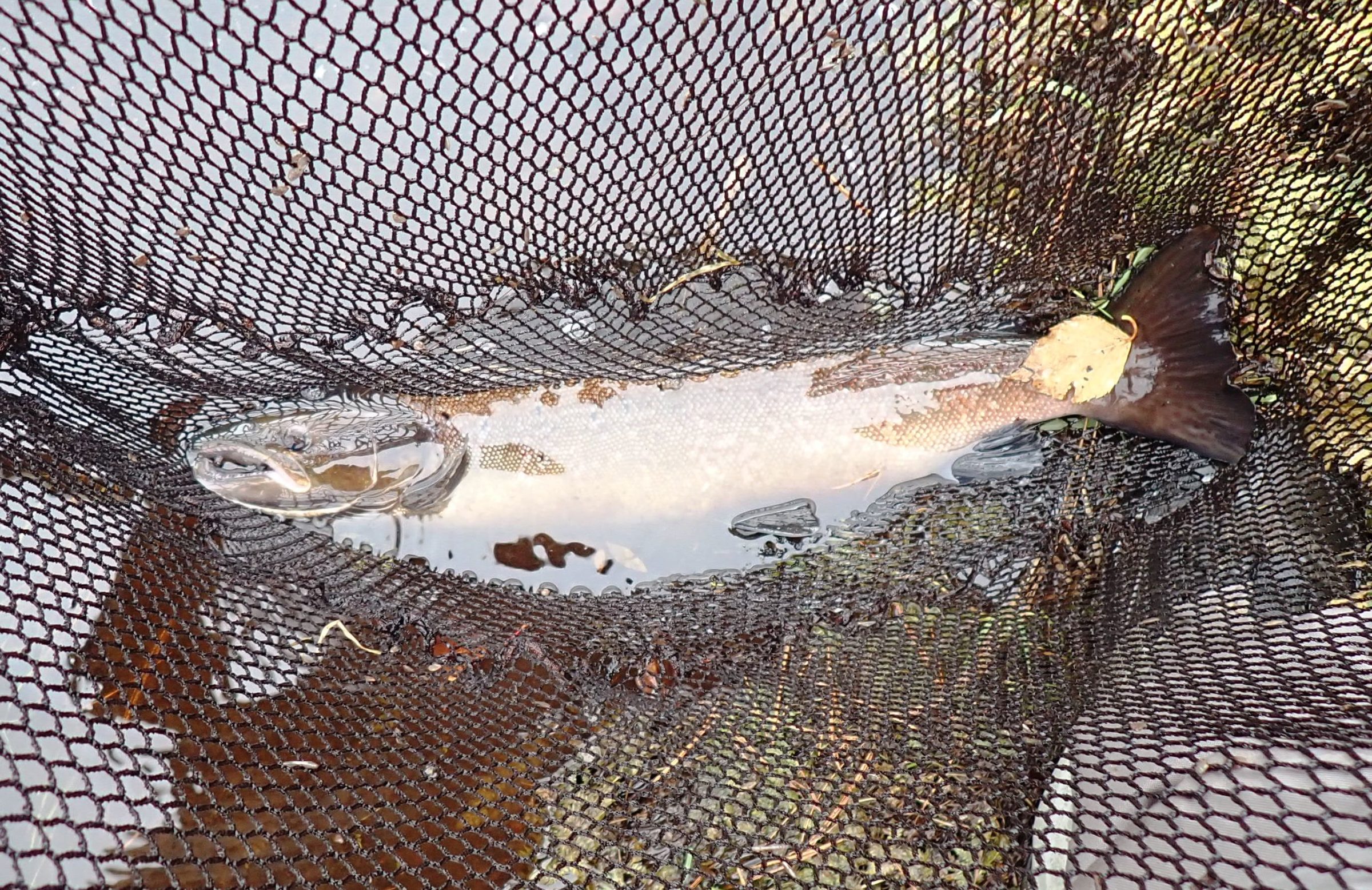 There were improved numbers of grilse in the rivers in 2021 and almost undoubtedly in 2020 too.

In the Jacquet the longer term grilse average was 218, and the 2021 number was 64 for a decline of 71%.  In the Jacquet the 64 total is the second lowest ever, having hit 45 in 2019.  I don’t know how valid the Jacquet is as a comparison, but the declines more or less mirror the Miramichi, they are just more severe when it comes to grilse.  I don’t know this for an absolute fact, but for what it may or may not matter I do not believe that striped bass spawn in the Jacquet estuary, so stripers are probably not a factor in that river’s decline.

The Dungarvon and Northwest barriers are showing more or less similar declines to the traps.  The salmon numbers on the Dungarvon were up quite a bit for 2021, and were actually comparable to some early years in the late 1990s and 2000s.  Those counts, though, are a very small sample.  The Dungarvon in particular is known to be heavily poached by netters, and with numbers as small as they are it could be making the situation look even worse than it is.

A curious and almost unprecedented phenomena of the 2021 season is the near collapse of the fall run of salmon on the Miramichi.  Historically the fall run was huge, and how many fish there were has been the subject of countless articles about fishing.  In the 1920s Dorothy Noyes Arms wrote in Fishing Memories that she and her husband didn’t fish the fall run because they considered it unsporting.  On the Cains, said Arms, the fish stacked up just below every piece of fast water so that the surface was covered with their dorsal finds “like so many small sails” and you couldn’t cast without snagging one.   When I first fished the Miramichi in 2002 we fished the Keenan side of Campbell’s Pool, and every half hour or so all evening a new batch of salmon would come jumping through the pool.  I had really never seen anything like it.

The fall run component of the total average annual run on the SW Miramichi from 1998 to 2017 was 297 out of an annual average of 731 or 41%.  In 2021 it was 49 out of 305 or just 16%!  Is the decline of the fall run a transitory phenomenon, or are we looking at the new timing of the Miramichi salmon run?  There were plenty of salmon in the lower river pools on the Miramichi right up until the end of the season in 2020, but it was a year of record low water right to the last few days of the season.  We don’t have Millerton trap numbers for the entire 2020 season, but we do have them from September 15 and October 15.  Those numbers show that in 2020 80 salmon entered the Millerton trap during that last month.  Historically that is a weak number, but it is far better than the 35 that entered during that same period in 2021.  It is, though, easy to believe that the main cause of the 2021 fall run collapse was the high volumes of cool water in the summer of 2021 that when compared to the warm, low flows of 2020 enticed the fish to enter the river earlier in 2021 than they otherwise would.  This does not, though, change the fact that the total run for the year was a lot less than just a few years earlier.  If the total run was in excess of a half million fish – as it was in the 1960s – there still would have been plenty of fish left to fish for in the fall.

The number of grilse entering in the September 15 to October 15 period was also higher in 2020 at 78 than the 63 that entered in 2021.  Anecdotally, but from people who know what they are looking at, the summer run through July in 2020 was very strong, so evidence builds that the total run in 2020 was very likely better than it was in 2021, but probably similarly skewed towards summer entry.

Here are the charts that DFO has put together to show both the salmon and grilse runs for the entire seasons of 2006 through 2021. 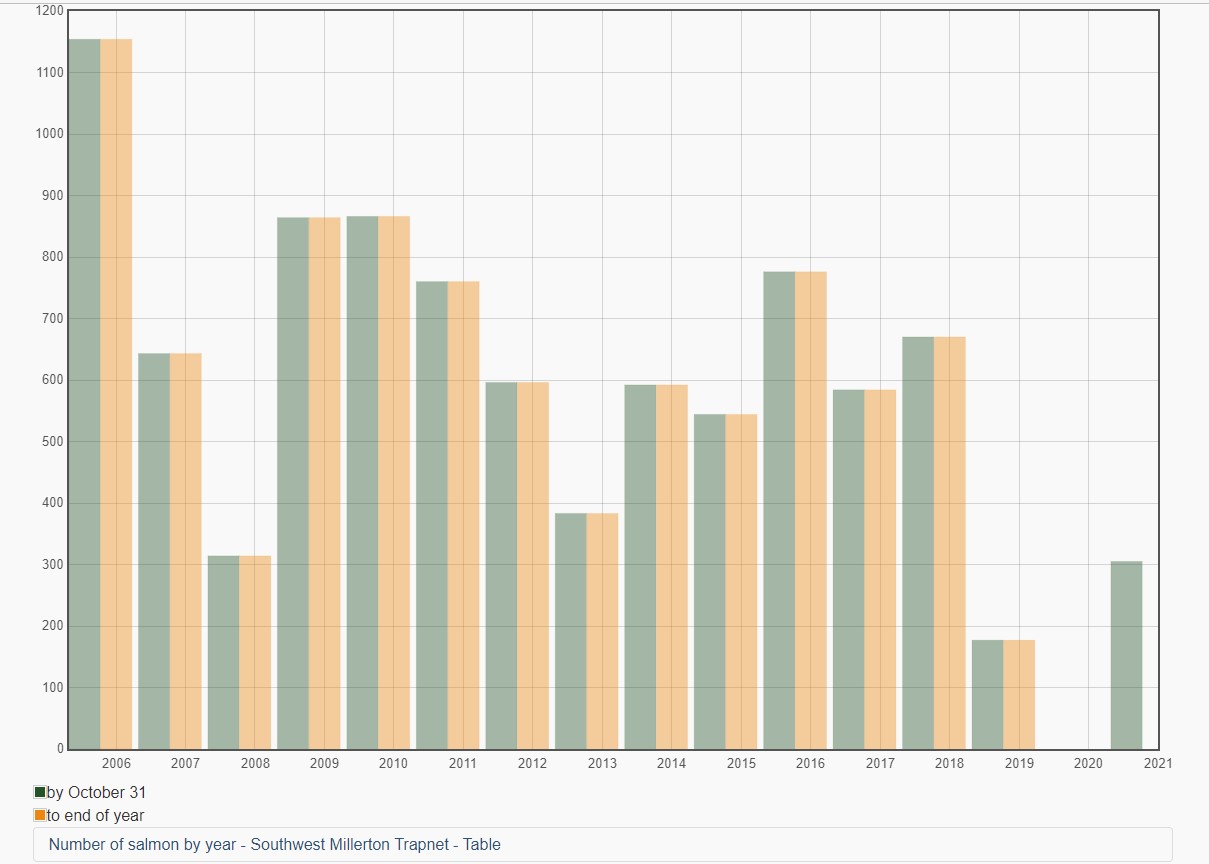 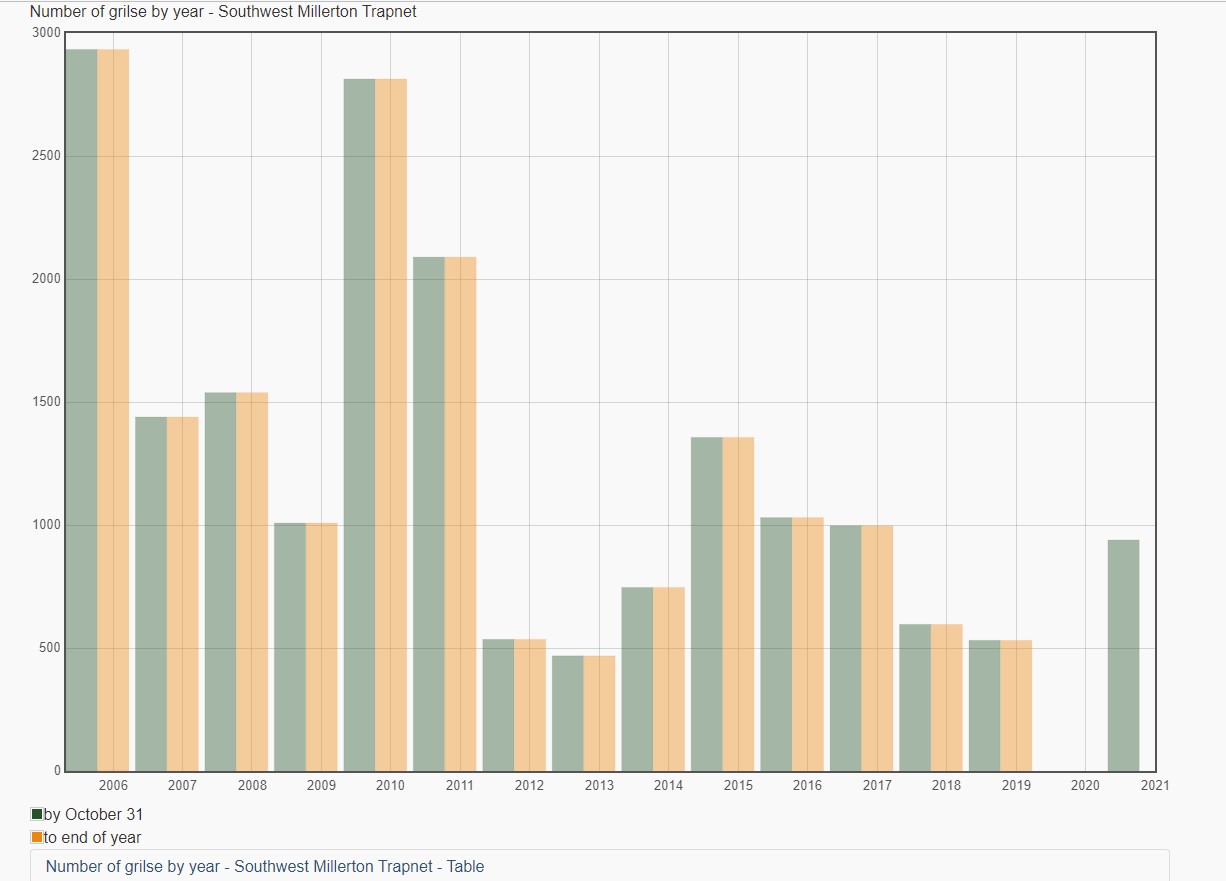 You will note that 2020 is blank, but if we allow ourselves to take the lightly substantiated step of putting both the grilse and salmon 2020 columns at slightly higher levels than 2021, we see that the 2020, 2021 grilse numbers are a significant uptick from 2018, 2019, and about average for the last 15 years, and that the salmon numbers would be roughly double 2019, and hopefully on the road to recovery.  2022 could see an increased run in salmon since the elevated numbers of grilse in 2021 may indicate a better year at sea for that year class getting the female component through that difficult first year.  The correlation isn’t always there between good grilse runs one year, and improved 2 MSW runs the next, but it often is.  June of 2022 could be a pleasant surprise! 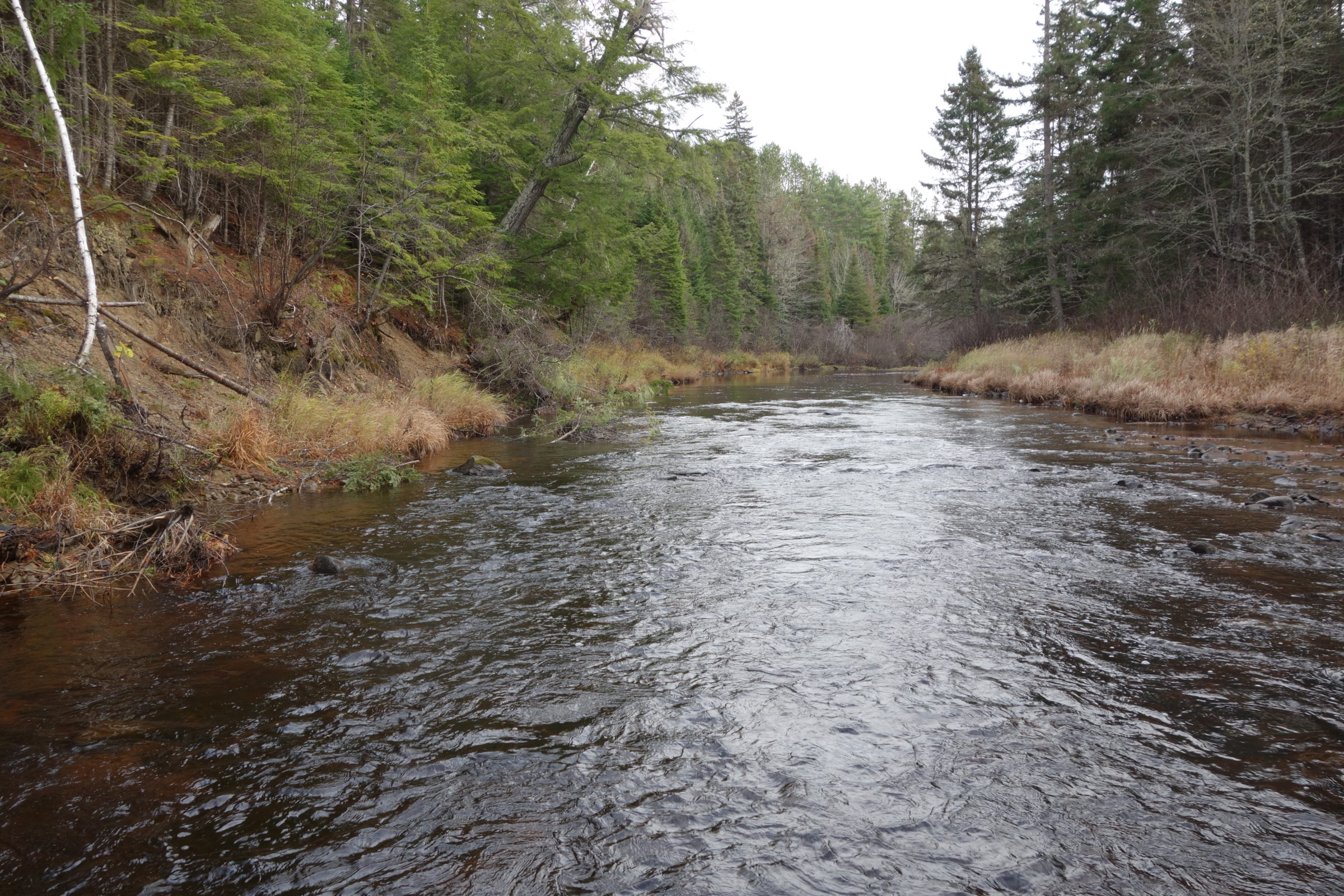 The high flows of September may have a silver lining in that it should allow the salmon to find their way far up into the spawning tributaries.  Wayne O’Donnell of Rocky Brook reported during September that there was a remarkable decrease in the number of salmon holding in their pools when compared to the summertime.  Clearly these fish moved up out of that section of the main river to headwaters areas.  Mark Hambrook and Rick Cunjak have both told me that the smaller tributaries are very effective spawning areas for salmon because the redds are far less susceptible to damage by ice scouring.

On the Cains and Closing the Season both make great Christmas presents.  If you go to my website at this link you will see tabs for On the Cains, Closing the Season, and a combo package for both books in the menu bar at the top of the page.  I still have a few copies of the John Rice illustrated map to go with On the Cains if you ask for it.

Thanks for reading .  Brad Burns