I’ve just spent 4 ½ days at Campbell’s.  Three rods landed 6 fish, so nothing to brag about, but not a skunking either.  I’ve added a few pictures to the post including one of me holding a nice chromer of about 18 pounds.

The rest of our landed fish were grilse.  It is certainly good news to see a strong grilse run in progress, and we do have one.  Not that there aren’t some large fish, there certainly are, but after  a couple of years of seeing few grilse it is good to see them in some numbers since it indicates better ocean survival.
Over my visit I spoke with fishermen, outfitters and clubs in my section of the river “Blackville, NB” and everyone is seeing fish, but the catches have gone from good to very slow over the last few days as constantly dropping water, hot weather, and clear skies are combining to make things very difficult.  We are finding the fish moving right on through evenings and mornings with the exception of some stopping at the cold water pools, but the lord himself can hardly catch one of those critters.  Hopefully there will be some rain and cooler temps, and we will have some happy fish.

On a brighter spot the number of parr feeding around the rocks at Campbell’s and Keenan’s was heartwarming.  We always seem to have a bunch there, but this year just seems exceptional.  Also, the reports of big salmon numbers being caught in the herring nets down in the estuary are very encouraging.
I wasn’t there a week and a half ago Thursday, but the Miramichi Salmon Assoc. did stock about 100,000 fry into the Cains River that day.  I sure hope we see 2% of those returning as adults in 2018/2019!
Hopefully once we get by this minor heat waver we’ll get a good rain storm and be back in business landing Miramichi salmon.
These days I’m frequently getting e-mails from folks who have read “Closing the Season.”  I love hearing from these people.  Often it reminds me of what a close brotherhood salmon fishing really is.  Check out this excerpt from a recent e-mail:  “…My “catch of a lifetime” occurred on October 10, 2008 when I landed a 35-pound (ASF “Salmometer” estimate) hen salmon at Moore’s Pool.  She was caught a General Practitioner using a six-pound tippet. There were of course many days of disappointment; one of those days was illustrated in your journal entry of Monday, October 15, 2012. “On the way out we stopped at the Moore Pool. There were a couple of anglers fishing there in the last of the light, and Gary Colford, their guide, was leaning on his net having a smoke. I rolled down the window and before I could speak Gary said: “I’m awfully glad this season is over.” “Nothing” I asked. “Nothing” he replied, looking down and shaking his head from side to side”.
I, was one of those anglers!
Thanks again for one of the most enjoyable books I have read about the Atlantic salmon, Salmo Salar.

P.S.  Check out the little decoration on my cheek made by a hook in some strong winds last weekend.   I got a little over confident in being able to get my backcast by me by using enough side arm.  Ouch! 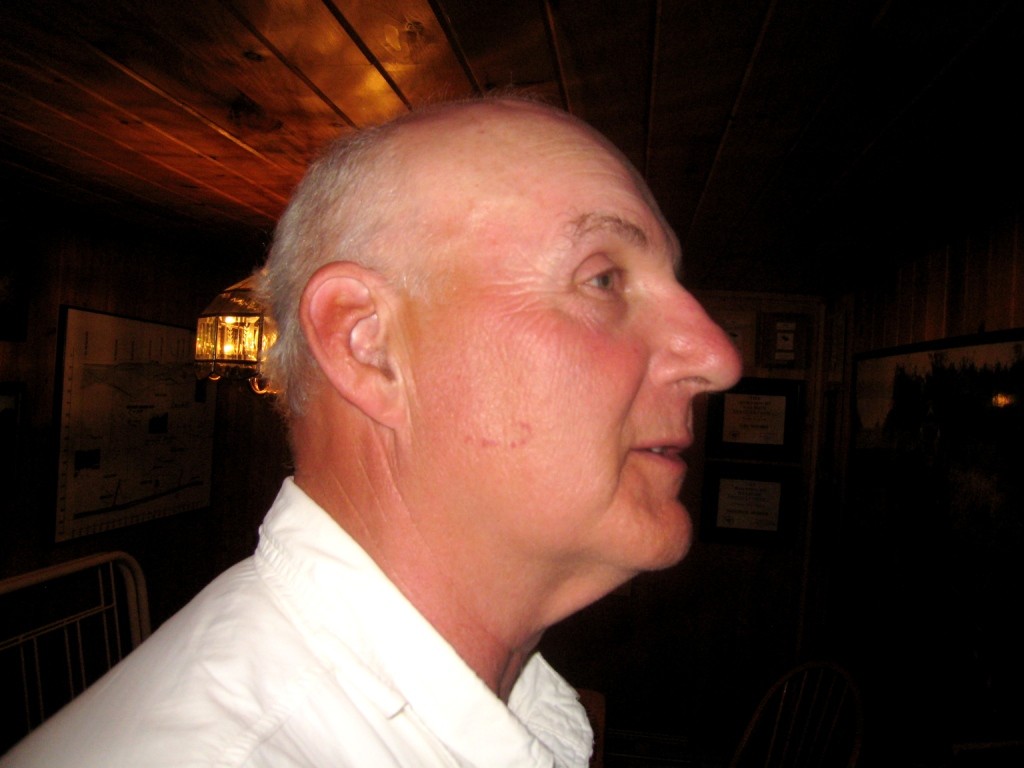