While I wasn’t in Canada over the weekend of December 10, thanks to the modern technology being used along the river I feel as if I personally witnessed the Miramichi freezing up for the winter.  Through the eye of the webcam at Renee Bullock’s Lodge in Boiestown – which I have watched from time to time all season long – I saw the river ice up severely on Friday, then saw it completely frozen up on Saturday morning.  During this same time frame Jason Curtis sent me photos from his I-phone of the stretch of the river visible from his deck in Blackville which includes Campbell’s and Keenan’s pools.  The Blackville portion of the river was visibly less thick with ice than Bullock’s on Friday, but first thing on Saturday morning the ice was dense and barely moving downstream.  Just before lunch it was no longer moving at all, and completely frozen in bank to bank.  According to most local folks this is more or less right on time.  The river can ice up as early as the end of November, but that is really rare.  Last year it was unusually late, not freezing up until the second week in January, but I guess that is last year’s El Nino versus the current LaNina. 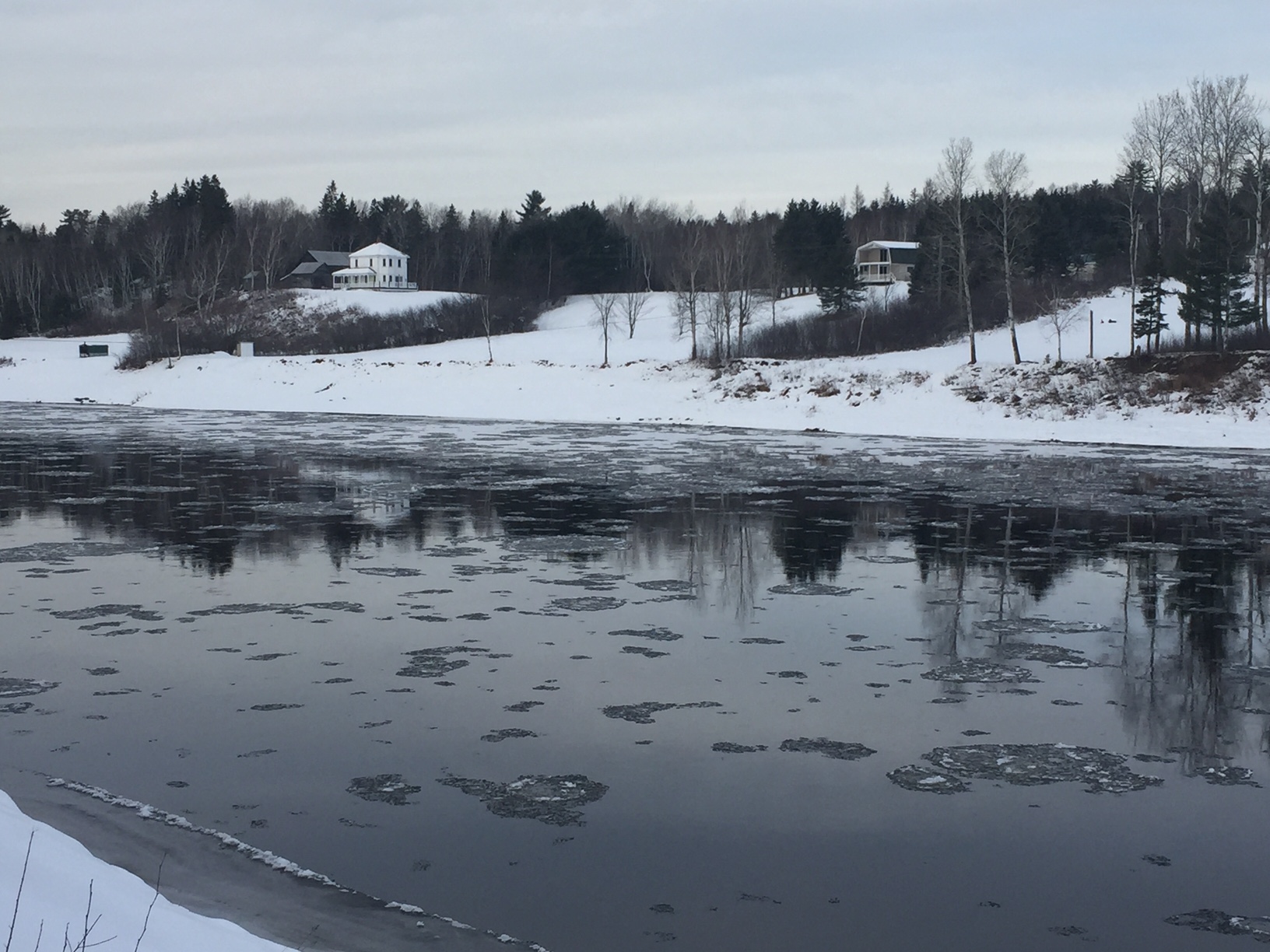 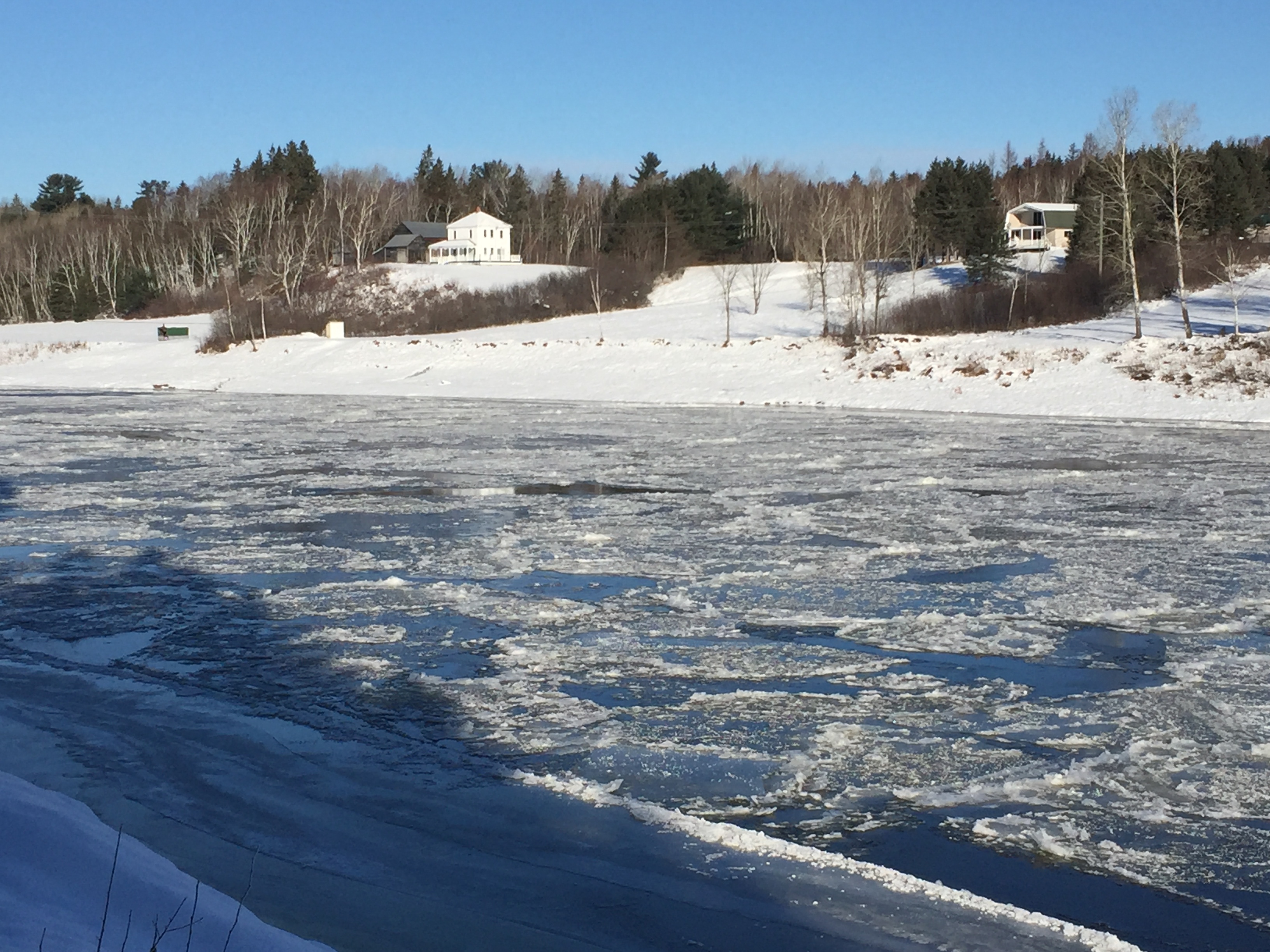 I’m feeling good about this year’s timely cold and Miramichi freeze up.  It seems right.  Last year it felt as if the river was being cheated out of its customary ice blanket.  When the break-up came in spring time the ice cakes stranded on the banks were much thinner than usual.  It just wasn’t a real Miramichi ice out.  Of course the rest of this winter is yet to be experienced, but we have a decent, cold start.

For all of its bleakness I love this season.  The salmon have finished spawning, and the redds are covered with pure, cold water.  The cycle that began with the first silvery fish of June has come to an end, and the beginnings of another year class of salmon are safely stowed in the gravel, right where they should be.  My old friend and guide, Willie Bacso, used to say that he felt better after New Years.  It is a turning of the corner.  The evenings already turned that corner a week ago, and are now creeping later each day.  We have to wait about two and a half weeks for the mornings to catch up, but Willie was right.  After New Years both ends of the day are headed towards their peak in late June.  How we love those early summer mornings when the birds start singing at 3:30 A.M. and salmon are again in the river.  It will be great to be on the count-down.

Here is something that will help scratch the fishing itch a bit while we wait.  The Miramichi Salmon Association is holding its U.S. dinner and annual auction again this year at the Marriot Hotel in Burlington, MA.  If you check out this link to the home page of the MSA you will find a lot of great material about the Miramichi and its salmon fishery.  While you are on the site please join.  There is very little you could do with $50 that would be more beneficial to the Miramichi’s Atlantic salmon.

Now take a look at the left hand “Quick Links” column and see “Upcoming Events”.  At the top left of that page is the announcement for the Boston Dinner.  This year it is being held on Saturday Feb. 4th.  There will be a lot more information about it later, but for a good evening of soaking up the salmon culture of the Miramichi, block off the date on your calendar to come to the dinner.  A lot of folks from out of town make it a destination.  They drive down from Eastern Maine or up from New York and spend the night at the hotel after the dinner.

This year at the dinner the MSA is honoring past president and New Brunswick lodge owner Vince Swazey.  Again, I remember Willie saying one time when Vince was mentioned, “you know Brad, there was never anyone more able in a canoe than Vince Swazey”.  Vince owned and ran Tuckaway Lodge in Boiestown for years, and I know that many guests returned year after year, not only for his great knowledge of the salmon, and how to catch them, but that big friendly, boyish grin that would make anyone feel right at home.

Last, please consider making either a year end donation or, if you have a service or product that you think might be popular, providing something for the Boston auction.  If you have an idea for an auction item just send me a reply e-mail at bigbass@maine.rr.com, and I’ll be happy to talk with you about it, and tell you where it can be sent.  You can make a financial donation by going to the tab at the top of the MSA website that says “Support Us”.  Once you do that “Make A Year-End Gift” will be the first item on the menu.

Last, here is something to consider.  Ever dream of fishing in the birthplace of Atlantic salmon fishing?  This year for the MSA auction one of our directors who lives in England, has donated a week of fishing with him and his friends on the River Spey in the Scottish Highlands.  You’ll stay in a palatial Scottish country house called Laggan House on the banks of the river, and fish the renowned Carron and Laggan beat during the week of June 19 through the 26 – a prime summer week.  The trip is for two, and the opening bid is only $3,500.

I wish all the purchasers of Closing the Season, and all readers of my blog a very Happy Holiday Season, a winter of pleasant dreams about salmon fishing, and the good health and fortune to put you back on the river next spring.