It is great to be able to say that it is late winter. In another week or so the daily average high temps will begin that slow rise towards spring, and we will be moving out of the heart of winter. We all know that there is more cold and stormy weather to come, and that the Miramichi is frozen sold – as it should be – but we have passed the crest of the hill. This is a time when I often think about the winters that the settlers in New England and the Maritime Provinces faced without snow plows, snow blowers or even electricity.
The picture below appeared on Facebook the other day. I enlarged it a bit and gave it some color. This is the old Brophy Farm where Otter Brook flows into the Cains. Those of you who have fished there will be able to recognize the spot. The little island out in the river above the brook is visible, and one can see the curve of the land where the stream runs along the edge of the pine trees. 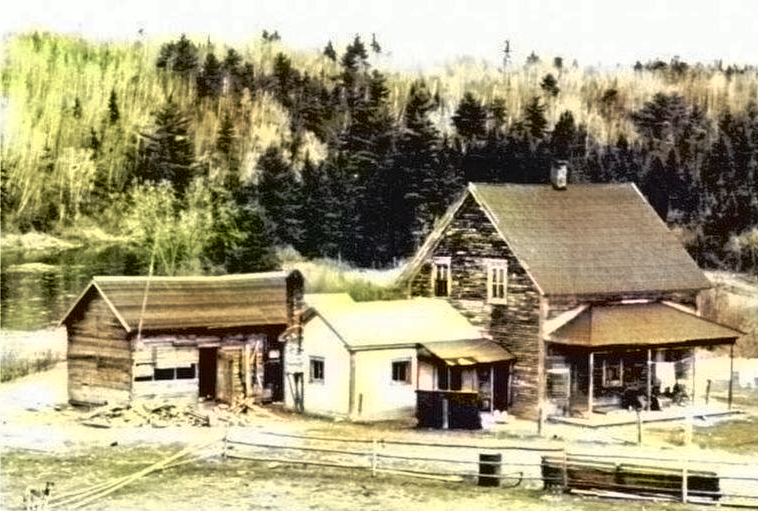 The house appears to have been located a little further down the hill than we thought. An old patch of lilacs near the present camp had made me think that was the area. There are still many people living around Blackville who remember this house including men I know such as Emery Brophy whose ancestors settled on the property, and well-known guide, Gary Colford who worked there summers as a boy. Can you imagine the winter storms and violent ice-outs that this old homestead endured? When thinking about old times, we could play a little game that an old fishing pal of mine, Phil Perrino and I used to entertain ourselves with. In the late 70s we’d be surfcasting out on the rocky, southwest end of Martha’s Vineyard. How’d you like to be here on the best night that there ever was, one would say to the other, as we stood there by the Atlantic’s edge and imagined the nighttime surf literally filled with huge bass. Well, you can imagine how many salmon were holding in the Cains River, in just the first hundred yards below Otter Brook, on the best day there ever was.

The Miramichi Salmon Association had their annual Boston Dinner last weekend, and in this year’s MSA board meeting held on the day before the dinner there were a number of things discussed that are worth relating:

The Atlantic salmon season open on April 15, and conditions depending there should be good black salmon or “kelt” fishing available in the river. It is a fact that almost 100% of the kelts that are caught, held out of the water for some time, have their bellies opened with a scalpel and a radio transmitter installed, then sutured back up and released, make it out of the river and swim down through the estuary and outer Miramichi Bay.  Eventually these fish make it through the openings between the barrier islands and out into the Gulf of Saint Lawrence. This makes one realize that using reasonable catch and release techniques when fishing for kelts it is likely that very few of them will be killed, and that many will live to come back into the river and spawn again. In fact many that have been released with the radio tags inserted in their abdomens have lived to come back and spawn again.
Historically many of the outfitters along the river relied on the spring fishery for nearly half of their annual income. For me it provides a chance to get back in the camp and out on the river again. There are a lot of pictures of the river during spring fishing in my earlier blogs if you scroll back through the previous posts. I’ve got three days of spring fishing planned and I can’t wait to get back up and do it. It is only a couple of months away now. Give it a try yourself if you haven’t done it.
The burgeoning striped bass population spawning in the N.W. Miramichi is clearly not helpful to the Atlantic salmon co-existing in the Miramichi watershed.  They both have a right to be there, but the management programs must be more balanced to keep the bass from excessively foraging on the young salmon.  On the East Coast of the United States where stripers are the #1 salt water game fish the situation is very different. While the wild striped bass population along the East Coast of America is trying to support some 3,000,000 recreational fishermen, the last vestiges of inshore commercial fishing are competing for this same resource. The results are a significantly declining fishery that has cost not only a great deal in lost jobs and economic activity, but deprived people of the opportunity for wholesome, exciting recreation that existed just a few years ago. Stripers Forever is a conservation organization that is trying to have striped bass designated as game fish in all U.S. coastal states. I’ve personally been very involved with this organization for years. Our chief fundraising event is an online auction being held right now and through Feb. 18th. There are items of tackle, clothing, many fishing trips – including one to Upper Oxbow on the N.W. Miramichi for striped bass – gifts certificates, artwork etc etc. Check it out and support Stripers Forever’s work if you see something that you like.