Fishing Friends – For years now I have kicked off the Atlantic salmon fishing season with a couple of weeks of fishing in Scotland.  Some of the best and earliest runs are in rivers located in the Northern Highlands.  Names like the Helmsdale, Brora, Thurso, Naver and the larger Dee and Deveron have fish entering during virtually every month of the year.  Mid-March, though, seems to be the generally acknowledged start of regular availability.  The fish that enter the rivers prior to June are referred to as “springers”.

This year George Watson and I returned to the Naver where we have been fishing annually since 2009.  We have leased a couple of stretches of the river called “beats” for each week we are there, and team up with friends we’ve made in Scotland including a well-known fly tier and retired Thurso River ghillie or guide, named Pat Nicol “the Heron” from Wick.

Early Run Report – Some years are better than others, but seemingly counter to the tales of woe that are so common in Atlantic salmon fishing these days, things seem to be on the upswing in the Scotland springer fishery.  It seems to be particularly true this year with good or at least better reports coming in from most rivers.  It has undoubtedly been helpful that Scotland has ended the practice of allowing coastal netting that previously indiscriminately captured fish from both healthy and struggling rivers.

I sure hope that this spring’s uptick is a harbinger of what we’ll see in June when the Miramichi early runners begin to appear.  When you look through the photos and videos included in this post you’ll see that a lot of the fish that we caught are in the 8 pound or so range.  These fish are likely to be 2 multi sea winter “MSW” virgin spawners meaning on their first trip back to spawn since leaving the river as smolts.  Holding off until June as they would on our side of the ocean they would weigh more like 9 to 10 pounds.  Historically these are the same fish that also make up a large percentage of the salmon run into the Miramichi.  Here are some typical examples. 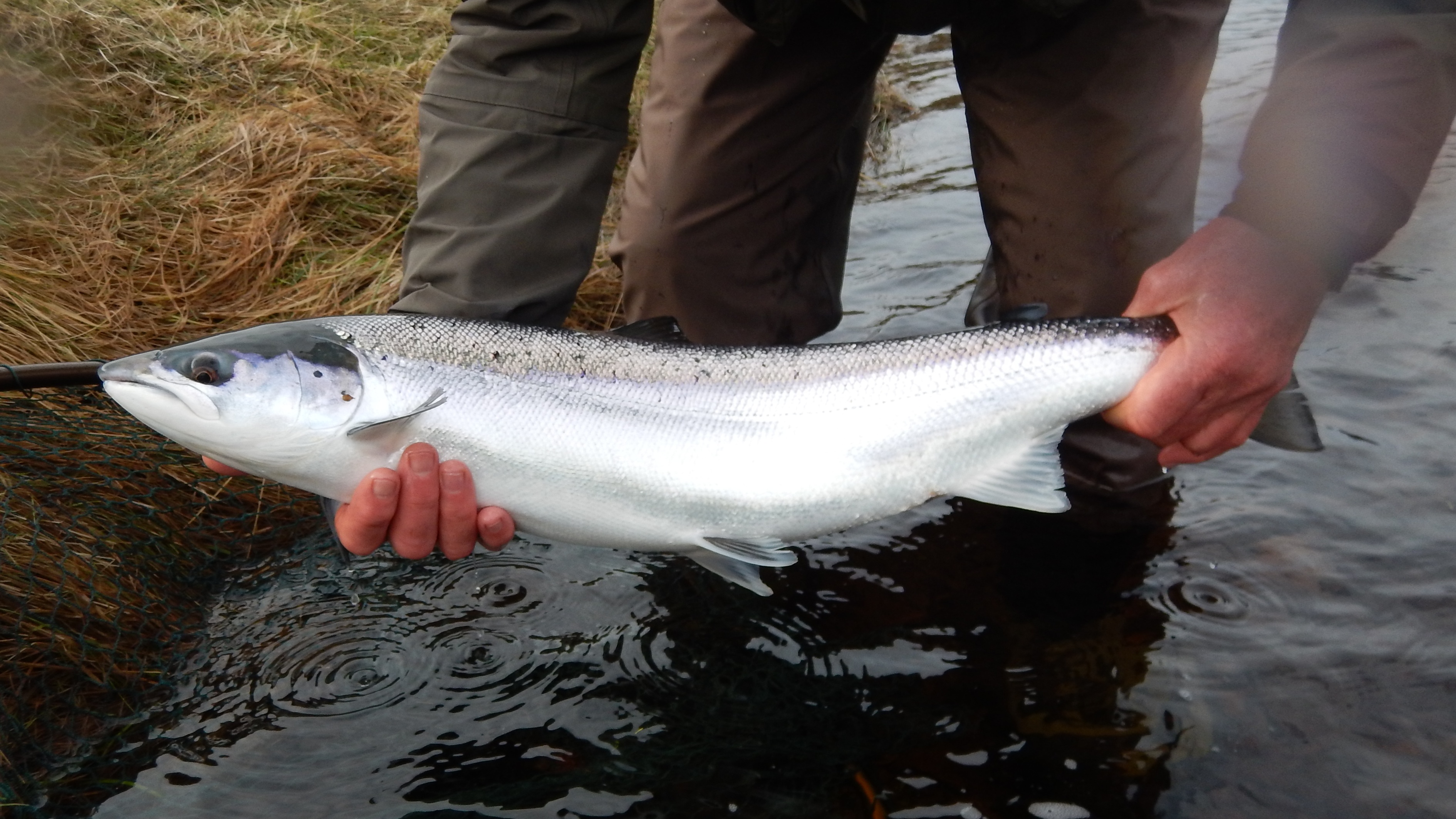 Big Fish Bragging – Not all the salmon entering early are small though.  There is a good smattering of teen sized fish.  We had one of 34.5 inches that according to the calculator should be about 16 pounds.  Almost all the early fish are fresh from feeding in the sea, chrome-bright, with solid, wedge-shaped bodies weighing the maximum for their length.  The Naver is not known as a “big fish river” like the Tay or Tweed, but it does produce some large outliers from time to time.  On Saturday the 18th I landed the fish pictured here, a 41.14 inch male that calculates out to 25.5 pounds.  It sure made my day!

About Scotland – Altnaharra, Scotland is on roughly the same latitude as Nain, Labrador – an Eskimo village.  The weather, though, is much milder and more maritime in Scotland which sits out in an oceanic flow called the North Atlantic Drift.  In addition to relative moderation this ocean weather pattern provides regular gales of wind and rain, and lots of gloomy weather.  Daily temperature highs and lows are very close together, and by New Brunswick standards Scottish winters are very mild, but the summers are much cooler than we are used to – wouldn’t that be nice.  This little video will show you the conditions we fished in on several days of the trip – turn up the sound a little.

Water in the Highland Rivers stays cool almost year round, but seldom freezes to any real extent even in winter.  The water temperature was as low as 37F during our stay, but during the second week got up to about 45F or so.  In tackle selection the bottom of this temperature range dictates sinking lines and long, slinky flies.  At the top end of the temperature range you can move to an intermediate sinking tip, and use a light weight fly instead of a faster sinking tip and a heavy copper or brass tube fly.  That 45F water temperature mark seems to be important as to whether or not the fish show on the surface of the water.  When the water is in the 30s you may catch fish, but you will not see any rolling.  During the second week, and on the warmer afternoons, we began to see the occasional fish roll or porpoise as it moved through the pool.  It sure makes fishing more fun when you know that there are fish in the pool that you are casting into.

Some Fly and Tackle Talk – The sinking tips which are so important in early season Scottish salmon fishing don’t seem to have the same effect on the Miramichi early run fishery due to our relatively warm water temperatures.  I think the same is true of fly size.  The long slinky flies that are used so much in Northern Scotland and in Scandinavia don’t work well in high water temperatures.  Fishermen there go to smaller sizes in summer just as we do.  When our first salmon begin entering the Miramichi in early June the water is normally already well in to the 50F range, and by mid-June it is normally over 60F.  We do use bigger flies in the early going, but I’m talking about going up to a #4 or #2, not to a 4-inch long Monkey Fly like the one pictured below!  Another big difference is fly color.  We tend to think of orange and reds as fall colors.  These colors are used extensively in springer patterns in the UK and I suspect it is just custom.  They would probably work on the Miramichi in spring time too.  The other hot springer pattern is one called black and yellow.  I caught the big fish on a two-inch long black and yellow tube fly made with Arctic fox.  My guess is that the colors really don’t matter that much at all, but I see no reason not to use the proven color combinations. 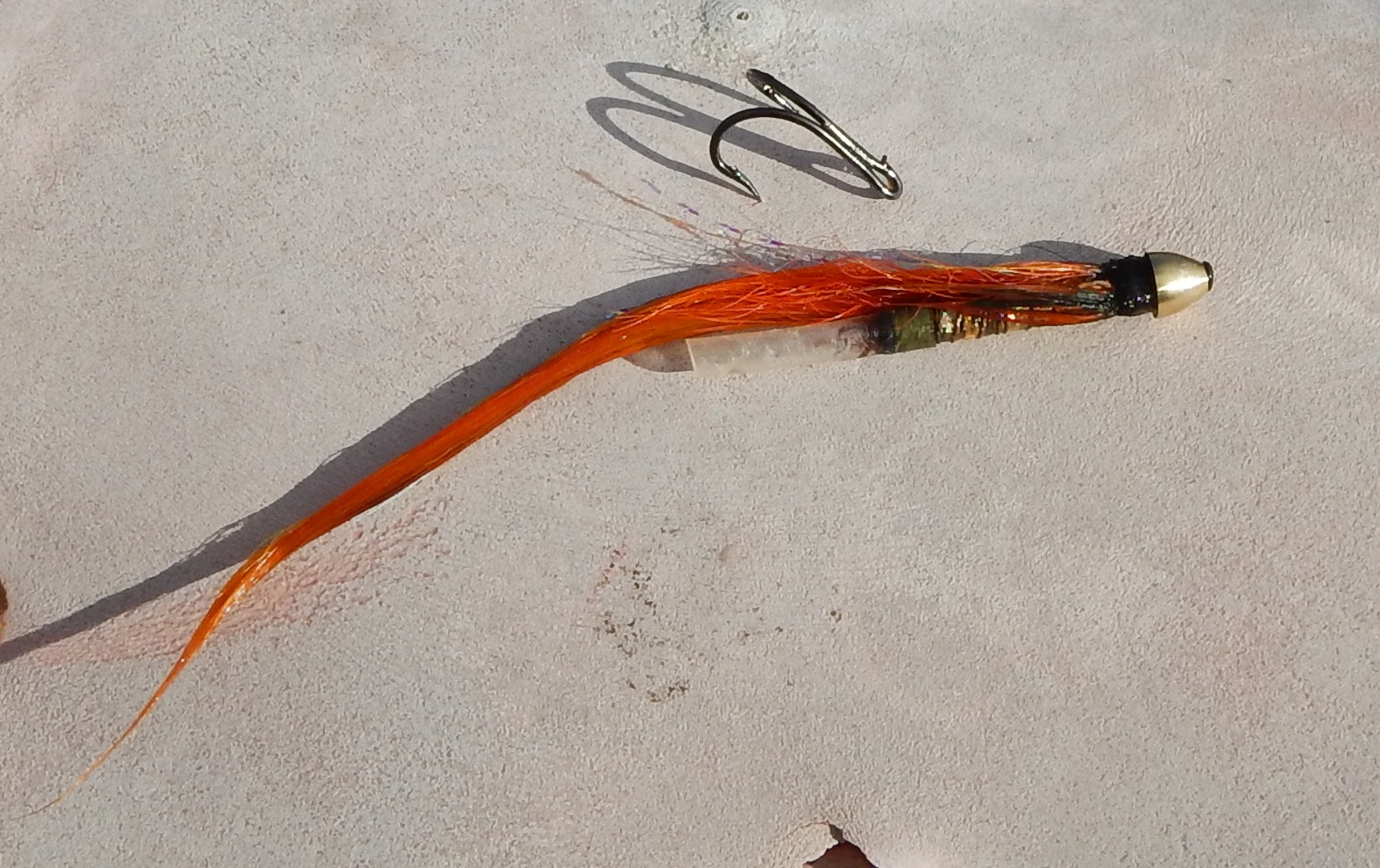 The Miramichi – A quick look at the Miramichi conditions shows the river currently running at about 1.6 meters and covered – as it should be – with thick, unbroken, snow-insulated ice.  The snow is still deep on the ground, and more is on the way.  Temperatures, though, over the next couple of weeks are forecast to be more or less normal with highs improving into the 40s which will create considerable day time melting.  Will we have open water for the beginning of the season?  Darrell Warren who spring guides for Country Haven Outfitters has lived his whole life on the river, and he says that it will be close.  Right now it is impossible to say for sure, but usually the river is ready to fish when April 15 comes around.  By modern standards we had a good run of salmon on the Miramichi in 2016, and there should be plenty of kelts available for this spring season.  I know that I can’t wait to get into a canoe and out onto the waters of Miramichi and Cains Rivers again.

Here are a collection of photos and videos from my recent trip.  Enjoy and if you have any questions just contact me at bigbass@maine.rr.com.  Brad Burns

The Round Pool – the big one came by casting from the corner. The current flows in from the right.

Soon to be free again!

Brown spots on the back are sea lice

George Watson plays a springer in the Kelt Hole

Here are some happy fish!