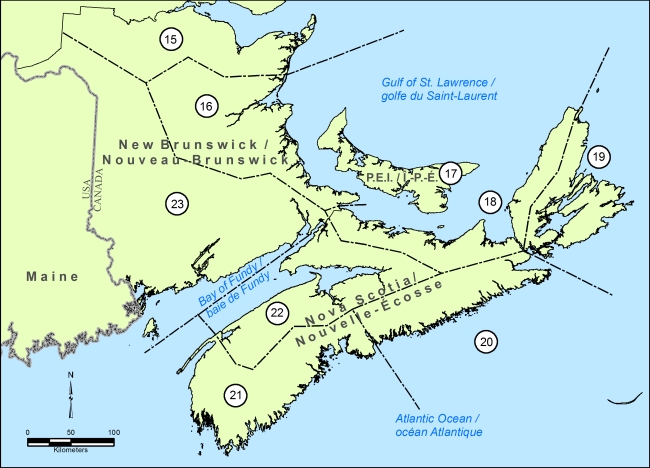 I recently received courtesy of the Miramichi Salmon Association a report by the Department of Fisheries and Oceans “DFO” entitled Indicators of Atlantic Salmon in Gulf Region Salmon Fishing Areas 15-18 for 2016.  This region is the Gulf of Saint Lawrence from the Bay of Chaleurs down to the north coast of Nova Scotia, and it includes Prince Edward Island.  The principal Atlantic salmon rivers in this region are the Restigouche, Miramichi in New Brunswick, and the Margaree in Nova Scotia.  Beyond that there are many smaller rivers both on the mainland and PEI that also have salmon populations.  I found the report to be reasonably encouraging.  Here are some of the highlights that I came across.

Restigouche – compared to the tag and recapture system used to estimate the run in the Miramichi the DFO uses the reported catches of angled salmon and spawner counts derived from diving through pools to calculate the Restigouche run.  The results were an estimated return of 5,535 large salmon and 4,400 grilse.  In 2016 large salmon showed an increase of about 11% over a 12 year period while grilse are down by 47%.  This trend of outcomes between large and small salmon abundance repeats in most other salmon rivers within the region, and given the fact that juvenile or parr counts have been somewhat consistent one has to assume that somehow recent sea winter conditions are better tolerated by the larger fish.

According to the DFO Restigouche fry and parr have declined modestly over the last 12 years, but they also state that this could be biased by difficult sampling conditions.

According to DFO salmon fry were captured at all 56 survey sites around the river meaning that salmon continue to spawn throughout the watershed.  Overall juvenile salmon abundances have remained at higher average levels since the closure of the commercial fishery in 1984.  In fact parr densities are quite  good throughout the system, though there has been a modest decline over the last 12 years in fry and small parr.  The exception to this is the Southwest Miramichi where large parr – next year’s smolts – have increased in abundance consistently over the last 12 years and are consistently well above the long term average levels.

Margaree – 2,500 large salmon and 350 grilse were estimated to have returned to the Margaree in 2016.   These numbers are both well below the long term averages.  The Margaree only has a conservation requirement of a little more than 1,000 salmon so there are plenty of spawners in the system.  Parr counts, though, are among the lowest that have ever been counted in the river.

Rip Cunningham – member of Black Brook Salmon Club, and a person with great experience in ocean fisheries management sent me some thoughts on why we may have seen an increase during the last couple of years in sea winter survival of Atlantic salmon:

Salmon numbers for many Maritime rivers have been trending upward for the last several years. There is a lot of research and discussion about what has been happening to cause the low return numbers in recent years as compared to historic levels.  At this point, there is no smoking gun, but it is common sense that these fish need forage while they are wintering over at sea. Several recent articles have talked about the resurgence of capelin, a primary forage for a number of species, around Newfoundland. https://www.bostonglobe.com/metro/2016/08/06/after-years-decline-cod-and-community-rebound-newfoundland/oNxKF14RpE47yc65OOAy6O/story.html

This has to be good news for salmon and may indicate a return to historic norms for water temperature in that area of Western North Atlantic and with that the return of a historic norm for forage base. It certainly appears to be the case with cod which are also rebounding off Newfoundland.  We will have to see if it holds true for salmon.

Thoughts on the benefits of longer Spey rods – Among my blog followers, and traditional North American fly fishermen in general, two handed rods are used by a minority.  That is my observation, plus I hear it from shops along the river like W. W. Doak and Curtis Outfitters.  But some Atlantic salmon fishermen, and those who go west for steelhead, have embraced the concept of Spey casting.  A lot has been written about the relative ease of making a long cast with a Spey rod, and the fact that you don’t need to strip in and manage nearly as much line in order to make those casts.  I find that among those who do use Spey rods the short, thick heads as used in West Coast Skagit casting, and to a lesser degree Scandinavian underhand casting, have found a ready audience because they make Spey casting much easier to learn.

Casting with these short, heavy heads is so easy that instead of the traditional 15, 16 or 18’ rods many anglers use 12 or 13’ rods.   I’m not sure exactly why people gravitate to the smaller rods, though I guess that it is perceived weight, and perhaps just that these anglers are more comfortable with shorter rods because they are more like the single-handed rods that they learned to fly fish with.   Are anglers, though, missing some of the greatest benefits of Spey casting by using the shorter rods?

Most of the advantages that Spey rods bring – easy line mending and steering of the fly, long casts without a lot of line retrieval or false casting, easy casting of sink tip lines used at the ends of the Atlantic salmon season, ability to keep the line away from you in higher winds, better casting with rough bankings or obstacles behind you that limit your backcast, are all enhanced with longer rods.  A modern 15-footer can weigh less than 9 ounces, and that’s less than a 13-footer did just 4 years ago.  You can cast a rod like that all day long without undue fatigue.  I just put in two back to back 6 day weeks in Scotland casting nothing but a 15’ Sage Method – not the very lightest you can get – and developed no sore muscles and never felt particularly tired.  The new 15’ Sage X-Spey that I just ordered is only 8 7/8 ounces!

Even in the lighter line weights I am going longer.  Over the winter I also bought a 14’ 8-weight, Sage X-Spey because it is 6 inches longer than my 13’ 6” Sage One 8-weights.  I’m confident that I’m going to like the extra leverage and reach that this rod provides.

Here are a few tips and thoughts that I’ve learned when it comes to fishing with Spey rods –  You will cast 90% as far if you back off considerably on the power.  Good timing and form will allow you to cast further with limited effort.

Strive for technique instead of trying to muscle your fly off to the horizon.  I’m constantly amazed at my fishing buddies who are also golfers.  They analyze and practice their golf swings incessantly, but only work on their Spey casting when they are on a salmon fishing trip.  Get a good video or two – You Tube is full of them – find some nearby water, and practice, practice, practice…

Buy the best rod you can afford.  The best tackle really does perform better.
Use the lines the manufacturer suggests for the rods, and stay away from the really long heads.  They will frustrate the devil out of you, and their advantages, even if you learn to thrown them, are debatable.
Be sure to learn the Circle C or the Snap T.  These casts are more or less the same thing, and will anchor the line on the water in front of and away from you if needed – wherever you want it.  They are very important casts to have in your tool kit on windy days.

All Spey casts end in the single Spey –  Put most of your casting practice into developing a single Spey with the rod kept close to your body, using a decent amount of lower hand pressure, and with a relatively small rod rotation.  Long arm movements tend to create problems like tailing loops and pulling and pushing excessively on any Spey rod and line can quickly create muscle and joint problems – I know because I’ve been there.

Miramichi condition report –  I wish that I could find some material sign of spring to report to you from the Miramichi.  March has been colder than February this year – or close anyway – and the river is running at as low a level as it has for a long time -rising water is the first thing that happens when the river is threatening to break up.  I even looked on Bullock’s web cam up in Boiestown, and the river can only be distinguished from the rest of the landscape by the fact that there are no trees growing on it…

The 14 day trend, though, shows a significant break coming next Wed.  Also, the Miramichi valley is not forecast to get the storm we will receive this Friday night – so their snow cover won’t be further increased.  After next Wed. a protracted period of round the clock above freezing temperatures are forecast with daily highs near 50F and occasional rain forecast.  That is what we need to finally bring us into spring.  Will the river be ready to fish on 4/15?  I really have no idea, but stayed tuned because we’ll keep track of the weather and events leading up to ice-out.