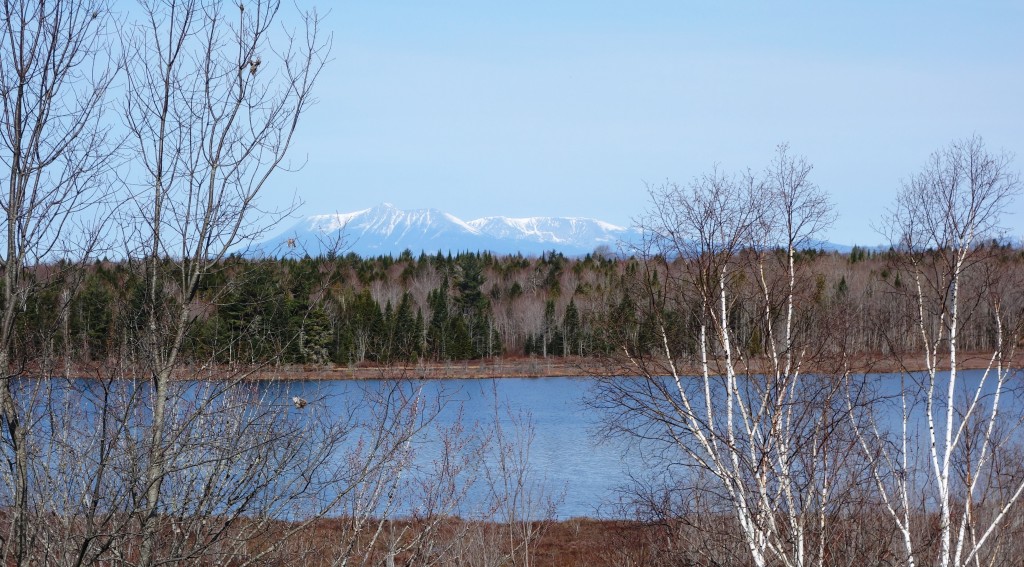 View of Mount Katahdin on way through Maine to the Miramichi

I just got back from Blackville, New Brunswick. I drove up last Thursday, and fished Friday – opening day of the Miramichi salmon season – and Saturday before coming home this morning.  The fishing was as good as I’ve had in the 15 or so years that I’ve been going up.  I’m sure it doesn’t compare to the good old days when the Miramichi was thought to have had regular runs of several hundred thousand salmon, but it was pretty darn good just the same.  The limit these days is to release 10 spring salmon – kelts – in a day on the water.  That was certainly possible to do this year. 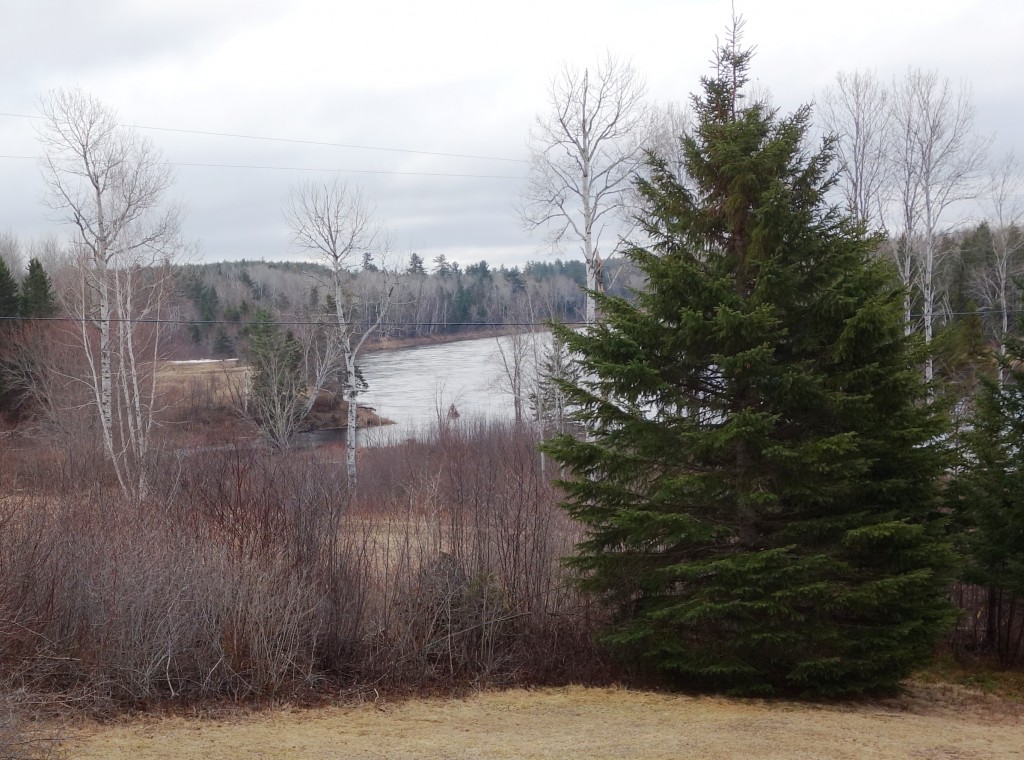 My camp at Campbell’s Pool is situated in an area nicknamed “the Golden Horseshoe” meaning that it was thought to be the prime area for spring salmon fishing on the river. The commercial lodges of the day made up to half of their income for the entire season fishing for kelts.  While the fishery doesn’t attract as many people as it did years ago, it is still quite popular, and there was steady stream of boats fishing here and there all up and down the river in the Blackville area.

A half dozen boats fishing for spring salmon in a popular Miramichi stretch.

It was below freezing each morning, and I didn’t head out until about 10:30. Jason Curtis and Darrell Warren who guide full time at Campbell’s during the summer both had guiding commitments so I ended up fishing on my own.  That was the first time that I’ve fished by myself in the spring, and while I’ve released many big stripers fishing alone from boat and surf, handling canoe, net, anchor and a big salmon all at the same time proved to be quite a task.  The difference is that when the bass come alongside you can just grab them by their lower jaw and hold on while you unhook them.  There is no such easy way to grab a salmon.  The mouths of the salmon are full of sharp teeth, and you can’t just put your thumb in there.  Besides that the stripers stay relatively docile once at hand.  The salmon twist and turn incredibly.  It sure is handy to have a guide hold the fish while you pop out the barbless hook with a quick move of the forceps.

I caught fish that ran about half salmon and half grilse at each of several spots near the camp that I fished. I didn’t stay anywhere for too long.  For me it was fun just to find that there were fish holding in a variety of locations.  Finally I decided to head up into the Cains to eat my lunch and fish a couple of pools.  The Cains is quiet and beautiful at all times.  There was still a decent amount of snow in the woods, and though sunny the temperatures were very cool.  It really felt like opening day.  After a while I hooked a fish that I would later estimate at about 42 to 44 inches in length.  Like the rest of the fish I hooked this weekend the salmon was in terrific condition.  The big fish fought remarkably hard, and when I finally got her to the boat she hated to give up.  I had drifted down river with the fish for some distance, and maneuvered the boat to the side of the river out of the current.  Just as I was about to net the fish it would make another short run and avoid capture.  After several aborted attempts to move the fish with one hand and hold the big salmon net with the other my arms were ready to fall off.  Finally the big hen turned on the surface and rolled right into open net.  I dropped to my knees in the Sharpe canoe and brought the net in front of me.  The size of the fish was very impressive, and I couldn’t see any way to hold onto it unless I lifted it out of the water and set it in the bottom of the canoe, which I did not want to do.  While I tried to figure out my next move I noticed that by the grace of god the barbless, single-hooked fly was stuck in the net and not the fish.  I just turned the net inside out and fish was free.  I watched her sitting three feet away in clear view.  The salmon very quickly realized that she was free and simply bolted right back towards the center of the river, seemingly unfazed by 20 minutes of exertion.  Recovery didn’t come as quickly for me. 20 years ago I could never have quit fishing after catching such a beautiful fish, but today it is no problem.

I’d had enough, and enjoyed a slow trip back to the camp where I later went on a walk with my wife through the fields of the old farms and then down along the shore of the river. The spring song birds are all arriving, I also saw two eagles, lots of white tailed deer, a moose, heard grouse drumming, and slept much better each night then I normally do.  Kelts may not be the equal of bright salmon, but put it all together and it is a great way to spend some April days on the Miramichi.

A couple of other quick notes:

Monte Burke of Forbes Magazine called to interview me about Atlantic salmon and stripers. He had a couple of interesting questions for me.  You can read it at this LINK to his blog on Forbes.

The New Brunswick Department of Fisheries and Oceans released their numbers on the Miramichi’s estimated salmon and grilse run for the 2016 season. There were about 16,000 salmon 26,000 grilse.  I would add, though, that because of the big raise of water that came on the last day of September their counting net was removed at that time from Millerton.  There is no question that a substantial amount of salmon and grilse entered the Main Southwest Miramichi after that and were not counted.  While the official estimate is that the MSWM reached 92% of spawning potential, it could well have been a little better than that.  Still these numbers are half of what they were routinely just a few years ago – and having the net blown out is not unusual.  In view of everything the DFO has decided to keep the fishery at zero retention again this year.  All salmon and grilse must be immediately released in 2016. 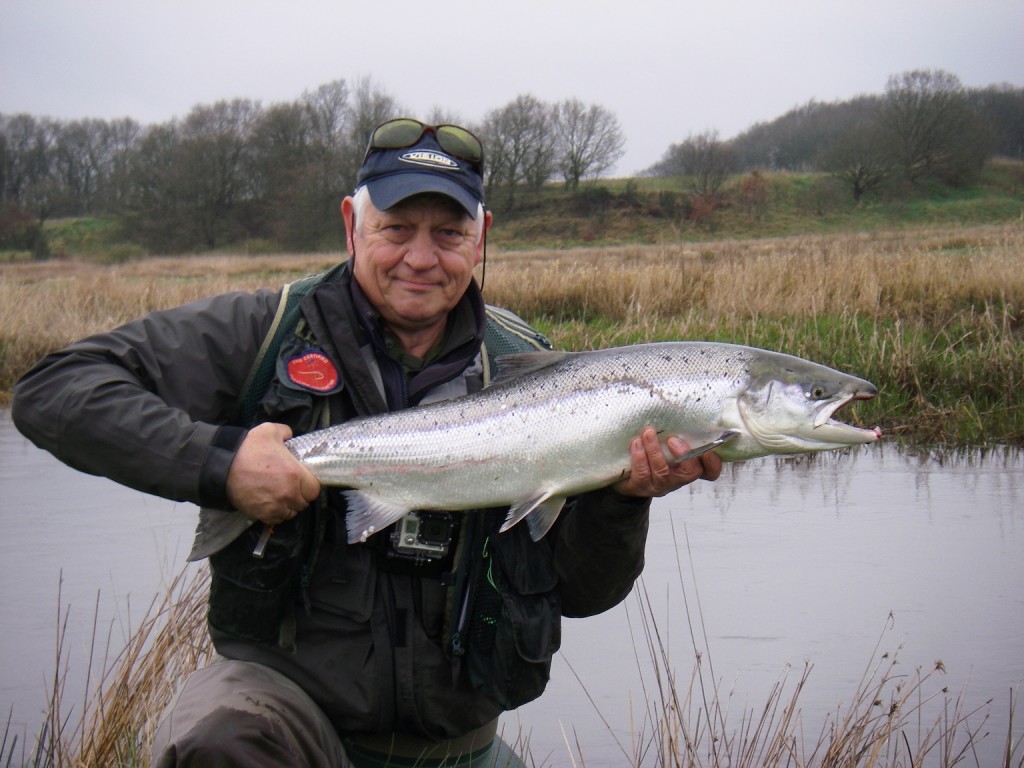 I’ve made a few European sales of my book Closing the Season.  One of these folks is Jens Lund Adamsen from the Jutland area of Denmark.  Jens sent me this picture of himself with his recent catch of a bright 15-pound salmon.    It is amazing that as far north of New Brunswick that Denmark is how far spring there is advanced.  We won’t see any bright salmon until at least the last few days of May.  Thankfully, though, that isn’t all that far off now.