The efforts of the CAST coalition, further supported by many e-mails from people like us, got the attention of Minister Hunter Tootoo and staff.  A meeting was quickly arranged back in New Brunswick and a deal was struck to allow the collection this spring  of 5000 smolts from the NW Miramichi.  The plan is to grow these smolts to adult size and release them into the NW Miramichi two years from now so that they can spawn naturally and bolster the wild returns.  The details of that plan have not been finalized, and DFO plans to carefully scrutinize the final plans for releasing the adult fish before granting any approval.  Had the permit to gather smolts been denied, though, and it would have been back to the drawing board for another year.

We all wish that our smolts were returning from the sea in their historic percentages, and that spawning enhancements of any kind were not necessary. Until we can identify and correct the cause of this  problem, though, nature may need to little help to keep our runs from declining further.  Certainly 5,000 smolts is truly a drop in the bucket, and poses no risk to the river’s population.

Doug Underhill, in his weekly newsletter, reported that a North West Miramichi angler fishing for the Miramichi Salmon Associations’s annual kelt tagging program caught a salmon too large to put in the bins that they use to hold the fish prior to being tagged. The bins are 52” long, but this fish was measured by the MSA staff as being 55 inches long.  That would put this fish well up into the mid to high 40 pound range when it entered the river last year.  That is a helluva fish on any Atlantic salmon river of the world.   The fish was released immediately, and maybe some lucky angler on the NW will get a crack at it when it returns to spawn.

We are currently in the between-seasons-phase that happens every year as the kelts leave and we wait for the first bright fish to show up. Some Miramichi anglers are fishing for the very plentiful striped bass down in the estuary, and others are fishing for brooktrout which we understand are being caught in good numbers in the lower river.

The river got below 1.5 meters on the Blackville gauge before the recent rain. That is what I think of as the top end of a reasonable fishing height for the Miramichi. I’m optimistic that we’ll see the first bright fish by the end of the month.  I’m headed up Memorial Day weekend to give it a try anyway.  I can’t wait to swing my first fly of the season. 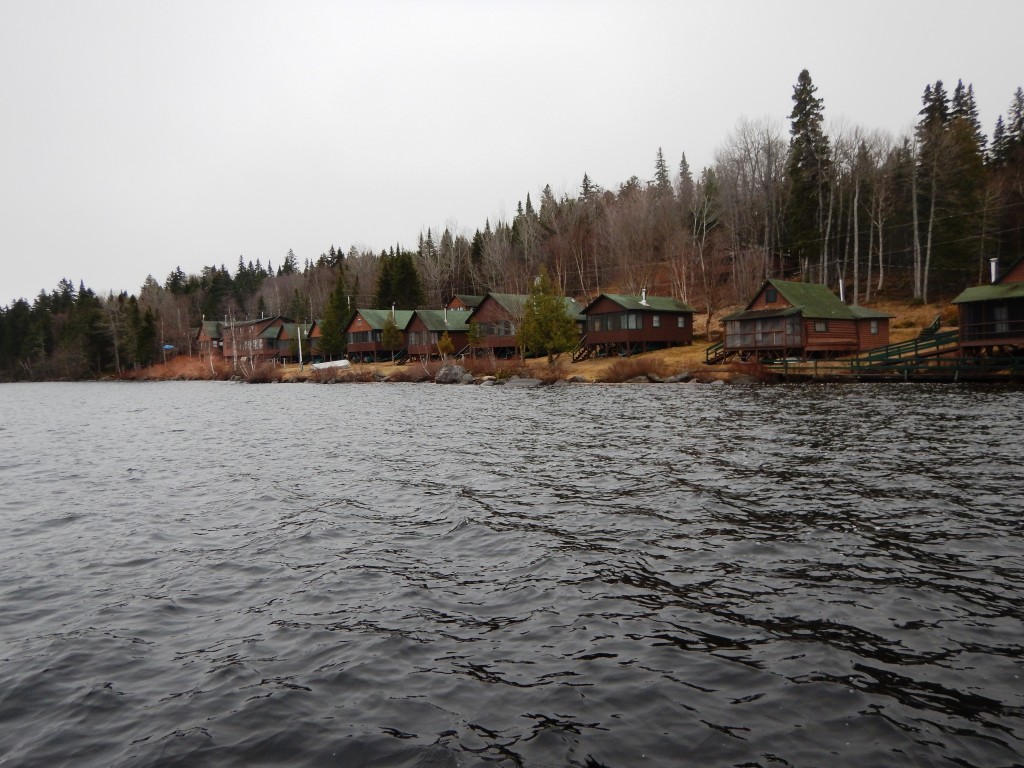 The other day I got a short notice invitation to fish up at Grant’s Camps on Kennebago Lake in Rangeley, Maine. While Grants doesn’t officially open for another week a small group of us fished with the owner and his son.  Maine still has a lot of these great old sporting camps and I have only fished at a few of them, but I sure have enjoyed every trip.

Water, water everywhere, and a bleak loveliness to Kennebago in early May.

The fishing in each part of the state has its own particular features, and the Rangeley area was known for its gigantic brooktrout. Beginning in the mid-1800s visitors to the area caught double-digit sized fish that created quite a debate as to whether or not they were really brooktrout, or some other similar species that grew a lot bigger.  The huge size of the fish was created by a delicate predator-prey balance between the brookies and a dwarf strain of landlocked Arctic char that lived in the lake.  The early settlers found the spawning areas of the tiny char and harvested them in unsustainable numbers wiping out both the char and the huge strain of brooktrout.  The introduction by the state of landlocked salmon and rainbow smelts was the final blow.

Still today several parts of the Rangeley watershed including the Rapid River and Kennebago have brookies that average much larger than in most other watersheds, and fish of 5 and 6 pounds are fairly regularly taken.

Grants Camps was founded in 1905 and is still the Kennebago standard bearer. Guests fish from the venerable Rangeley boats that look like a wide canoe but are rowed instead of paddled.  Fishermen at Grants also have the privilege of fishing in a large lake well supplied with big brooktrout and landlocked salmon that can only be accessed by guests of the camp and the owners of the relatively few cottages located around the lake.

An additional benefits to Grants is open access to the Kennebago River. The Kennebago River is large as trout streams go, essentially unspoiled, and it holds the same big brookies and landlocks as found in the lake.

We were there very early – both early and late in the season are times that I have a strange affinity for. For me there is a certain romance to the shoulder seasons. We had slow fishing, but we did catch fish, and the brookies that we got were all over a foot long with the largest at about 16 inches or so – not a trophy but a substantial and very beautiful fish. 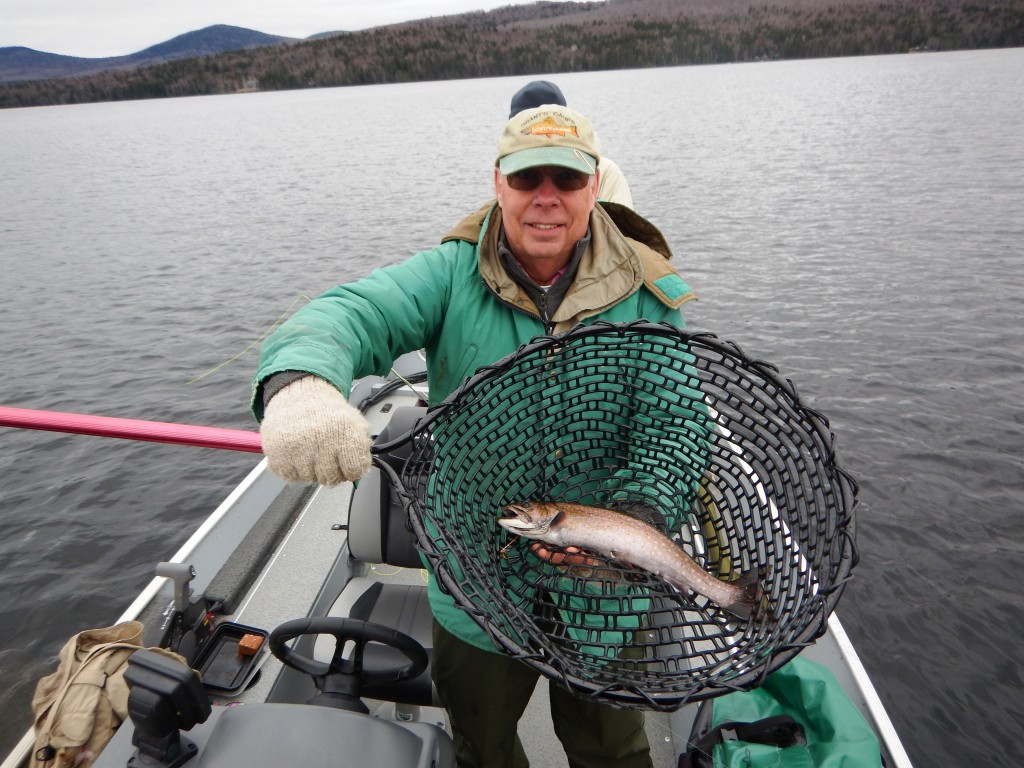 Conditions on the Miramichi

Like much of the East, New Brunswick had a mild March, but it has been relatively cold ever sense. It is gradually warming, though, and I see the forecast calling for a high of 21C or about 70F at the end of this week.  It has also been fairly dry, and the river has dropped down to 1.5 meters, a height that I consider to be the top end of decent bright salmon fishing water height.  I’m optimistic about a few fish being caught in May of this year, and I’m heading up Memorial Day to try for an early bright fish and a crack at the sea run brooktrout.  That will probably be my next report.