Bright June Salmon are in the River!

As we stepped out of the canoes on Saturday evening Jason Curtis said, “Well we didn’t get any, but for June 11 you sure have to be encouraged with the amount of fish we had holding in the pool.”

We drove up in the rain on Thursday afternoon and fished Friday morning in a high, dirty river. It was dropping, though, and by the evening we had a water height of 1.8 meters with the water clearing up.  I made a pass down through Campbell’s casting a 10-weight Rio Scandi Multi-tip on a 15’ rod.  I had a 15’ intermediate tip, 12-pound tippet and a #2 green machine with a krystal flash tail and body of variegated chenille.

Salmon fishing at Campbell’s Pool in the rain

Right in front of the bench I had hard take that really woke me up. From that brief but violent pull I could at once feel the strength, weight and speed of a big salmon, but just as quickly as that it was off.  50 feet further down, near the end of the pool, I had another take, but this time the fish was hooked.  I lifted the rod and felt again the strength and weight of a good fish.  The big rod bucked in my hands and the salmon turned to run, then once again everything went slack.   This one was a little easier to rationalize because instead of taking in mid swing like the first fish, this one had come almost on the dangle as I began my retrieve.  This angle often results in a poor hook set.  Still it was June 10, and I had encountered two bright salmon on the Main Southwest Miramichi.

We had better conditions on Saturday with the water was down to 1.6 meters and much clearer, but the morning session brought us nothing. At about 4:00 in the afternoon my guests were fishing from the shore and I was dropping down through the pool casting from an anchored canoe.  Not far from where I had hooked the fish the day before, but further offshore, a big salmon rolled behind my green machine in the middle of the swing.  There was a good jolt that turned the reel’s drag over, and the salmon exploded on the surface.  Again, though, there was no solid hookup.  Over the next hour I rolled three other fish, some a couple of times from various lies over an area of probably 5000 square feet.   None of them touched the fly.  My guests came out in a canoe and covered this water with different flies and casting from the opposite side.  Several other loose salmon rolled on the surface while we fished, and we carefully cast to these fish too, but they just wouldn’t take anything that we threw at them.

We were hoping that the rain forecast for Sunday morning would turn the fish on if we were fortunate enough to find them still there. Since we were driving home later the next morning we fishing a bit early, but the fish were either gone – most likely – or still sulking, and we saw and got nothing.  Not an unusual scenario for June salmon.  These fish are moving up the river fairly quickly, and if they find some lies that they like you may have them for a few hours, but they don’t often stick around for long.  Still, it was quite good action for June 10, a time when you may very well have no salmon at all near your fly for days. 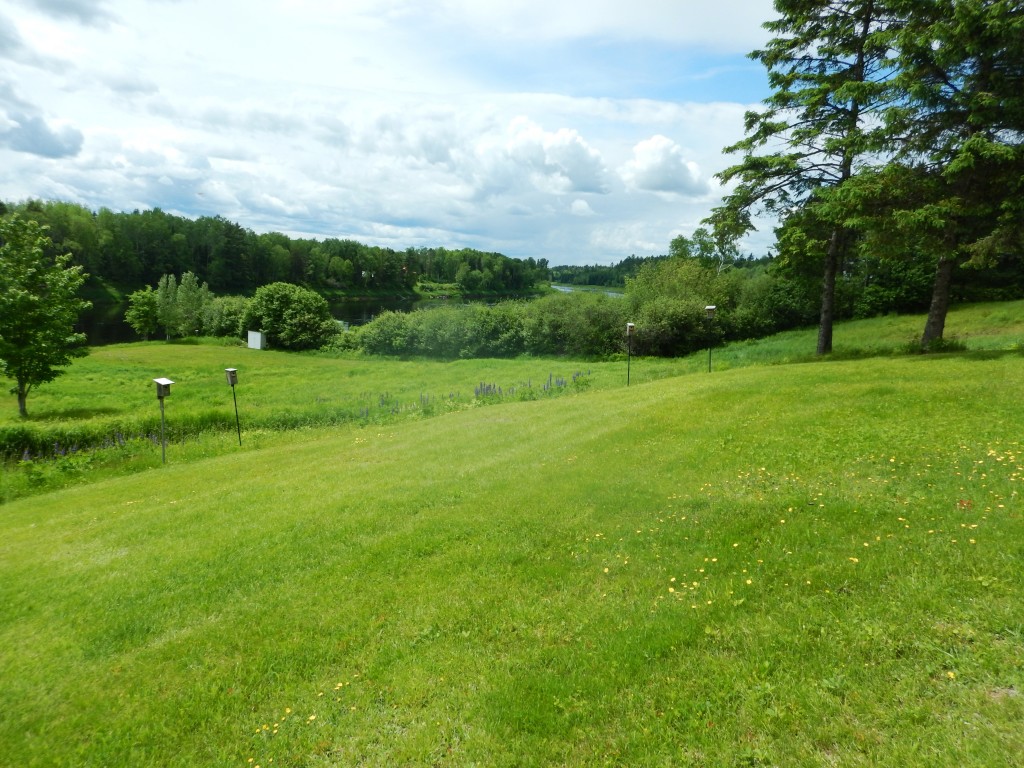 June on the Miramichi – swallows and lupine

The word is that while few people are fishing yet the NW Miramichi is fishing quite well, and The Ledges up in Doaktown has landed a fish or two. The weather is cool and damp for the first half of the coming week, and then an unwelcome stretch including several days of bright and warming conditions are forecast.  You can tolerate it better this time of year than later on when the water is lower and will heat up more quickly.  I’ll be headed back up on Wed. night.