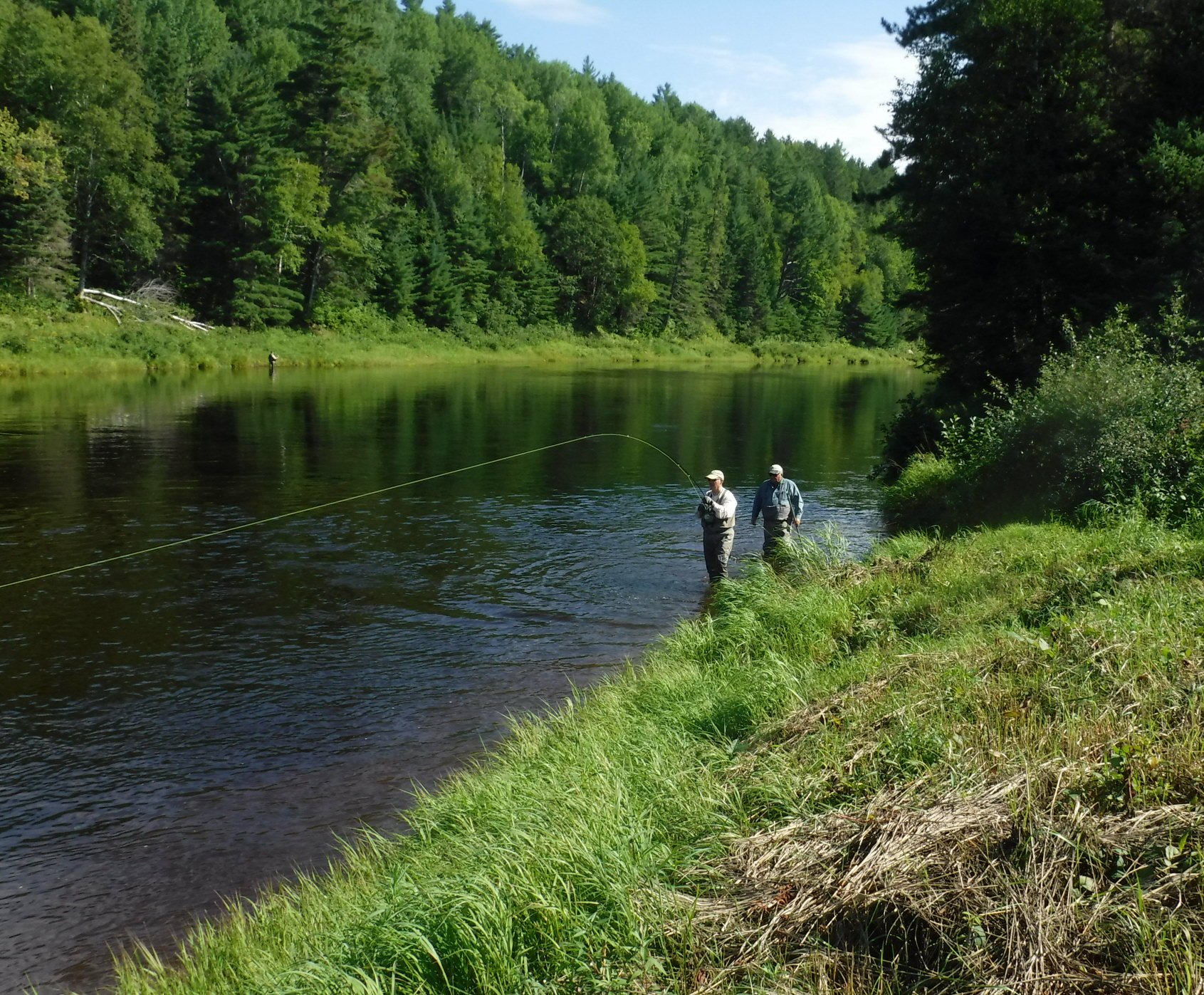 The Miramichi is blessed with a 16 week season during which one can reasonably hope to hook a bright salmon. That’s the longest Atlantic salmon season in North America, and while it is a wonderful blessing there are some issues to deal with during the middle of most seasons.  The most important of these issues are warm temperatures and water height.  All those who regularly fish the river try and end up with some access to a cold water buffered pool and a stretch of water that contains places where salmon can be caught in both high and low water.  This diversity helps to cut down on the number of unproductive trips.

Changeable weather can create situations that touch on all of these variables in the space of a very few days, and we are just now coming out of such a period. The back to back rainfalls in somewhat different parts of the watershed created great opportunities for some and only mediocre fishing for others, but the back of the three-week heat wave was broken, and as Doug Underhill said in his recent report, things are improving.  I anticipated the end of the ban on cold water pools when the cooling temperatures began around the 10th combined with rain forecast for that coming weekend.   As we headed up last Monday the 15th the reopening of the pools for Tuesday morning had already been announced.  What I never anticipated was that there would be not one, but two significant rain events, and how that would complicate the fishing.  Have a look at the graph below. 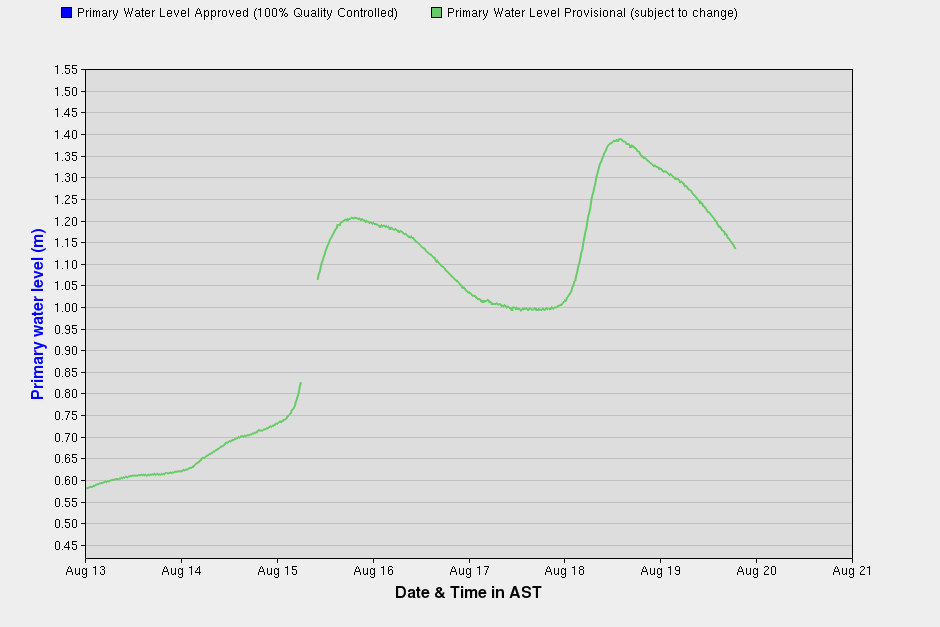 You will see that the rain on Monday the 15th brought the Miramichi up to a very nice 1.2 meters.  Since it was the first rain in some time it fell on a very dry landscape, and the river immediately began to drop.  On Wed. it rained again and Thursday we had a larger and much dirtier river in the making.  The temperatures throughout the period weren’t cold, but they were sufficiently cool, and there was enough blessed cloud cover to keep the river in the 60s at all times.

There is video on You Tube about Ted Williams and his long time guide Roy Curtis, and it talks about them planning a day’s fishing with the water being too high in front of Ted’s camp down in the Rapids, and they decided to try another stretch of the river for that day’s fishing. That is how it can often be on the large and diverse Miramichi system where you can have ideal conditions on one stretch and poor ones on others all at the same time.  We decided to divide our time between morning trips to the Cains River and fishing afternoons on the Miramichi to cover all our bases.

Day 1– Seeing that Bantalor had received 50mm or two inches of rain in the Cains headwaters, we felt certain that we could take our jet canoe from Blackville up into the cold water pools on the lower river to fish.  Here is where these forecasts become tricky.  Meadow Brook, which is much further down the watershed, received only 15mm or a half-inch.  The result was that we scraped over bars and boulders on our way up and in two places had to get out and drag the canoe upriver for a short distance to make our way.  We arrived to find that the water was only very moderately silty, and that the depth and flow where we intended to fish were both somewhat less than anticipated.  The fishing, though was red hot.

All morning long a mixture of fresh as well as colored “pool-fish” came readily to small green machines – #8 and #10 types – and to bombers. I had very little luck getting anyone to look at the standard issue brown hackle over natural deer hair bomber, but green bodies and orange hackle were hot as a pistol.  I remember Country Haven’s soon to be Hall of Fame guide Gary Colford once telling me to “just keep casting and changing colors until you find what they want”.  Color choice can be very important with bombers.  Also, that day, larger was better than smaller, and I find that the general rule when it comes to bombers.

I told my fishing companion, a friend who is relatively new to Atlantic salmon fishing to take careful note of this day. He would not see many where the fish took either as well or for as long as they did on that Tuesday, August 16, 2016.  To avoid limiting out far too early I experimented by fishing some likely looking spots along our section of the river that I never bother with under more normal conditions.  I even found one new spot that I liked in particular – now I just have to remember it…

Day 2 – The water was down surprisingly on the Cains that morning though two friends, both guides with great experience “sailed the river” from Buttermilk on down in a 20’ Old Town and had no problems. They found good numbers of salmon holding in several public pools that they came to along the way.  The fish did not take nearly as well for us as the day before, but none the less over the course of the morning we again had some good fishing.  It rained fairly hard off and on all day.

Day 3 – Again we were surprised at the Cains. This time the water had not only risen quickly from the previous day’s rain, but it was quite dirty.  The fish were certainly the fussiest of all three days, but none-the-less over the course of trying hard all morning we had good catches.  We tried different flies, but the same small, olive, ultra-chenille green machines with krystal flash tails were what the fish wanted.  Note that these flies were discussed and pictured in my Feb. 2, 2016 blog post entitled High Summer on the Miramichi.

Day 1 – I must admit that afternoons are my least favorite time. Days that start dark, dreary – and therefore fishy – often burn off to yield unwanted beach weather.  None-the-less, coated with sun block we waded into Campbell’s and Keenan’s pools late in the afternoon and I immediately had a big, fall grilse.  Many of the grilse, which were by far the majority of our catch – were very healthy specimens knocking right on the 24 inch door to salmonhood.  Any that we caught from our water on the Main Southwest Miramichi were fresh as daisies.  This is clearly  because in the hot water of the preceding week our pools which have no cold water buffering had no fish holding, and it was too early in the season for very many fish to be holding down in the Rapid’s cold water pools located downriver from us.  The fish we were seeing were predominately fresh in from the estuary. 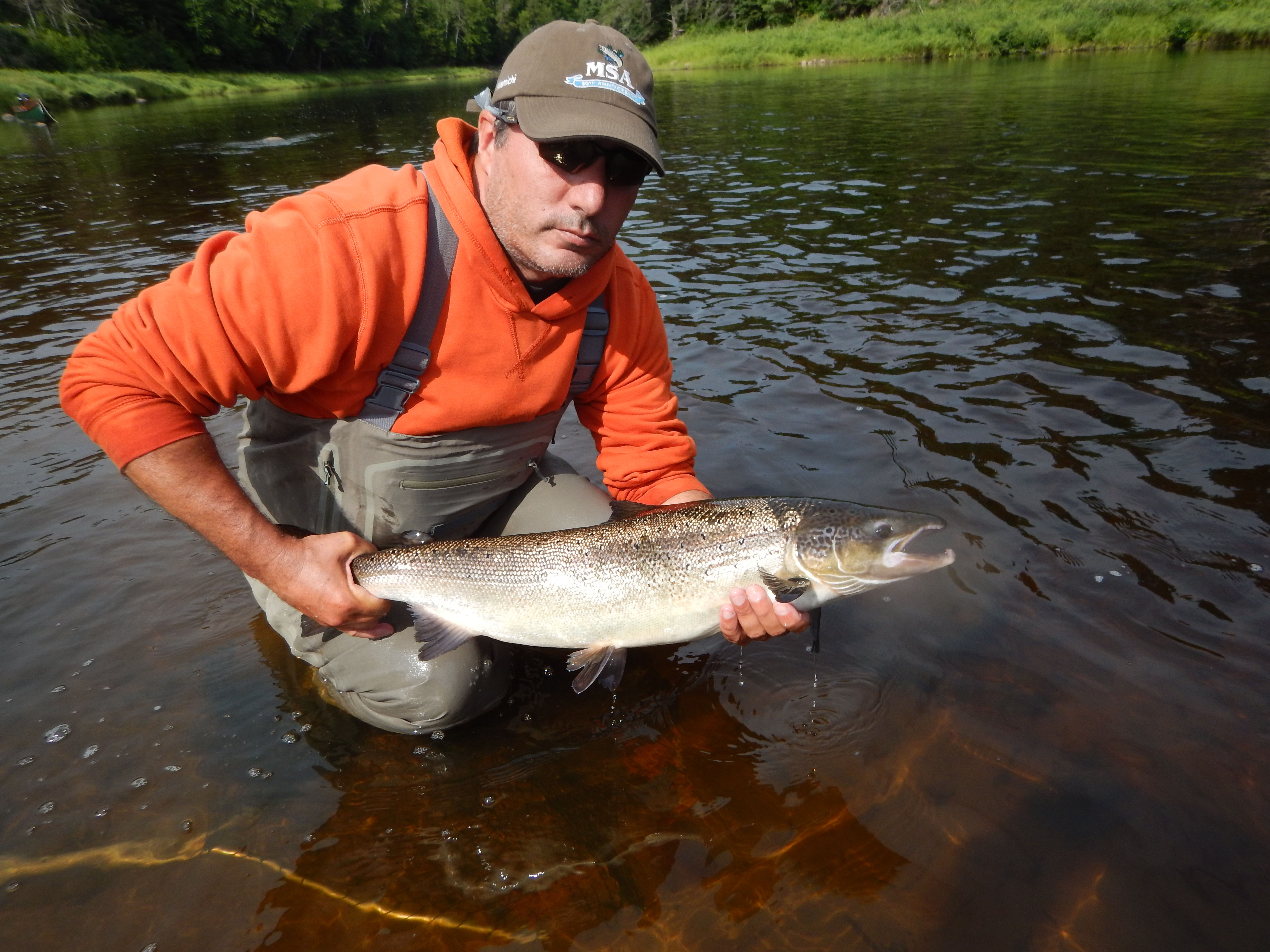 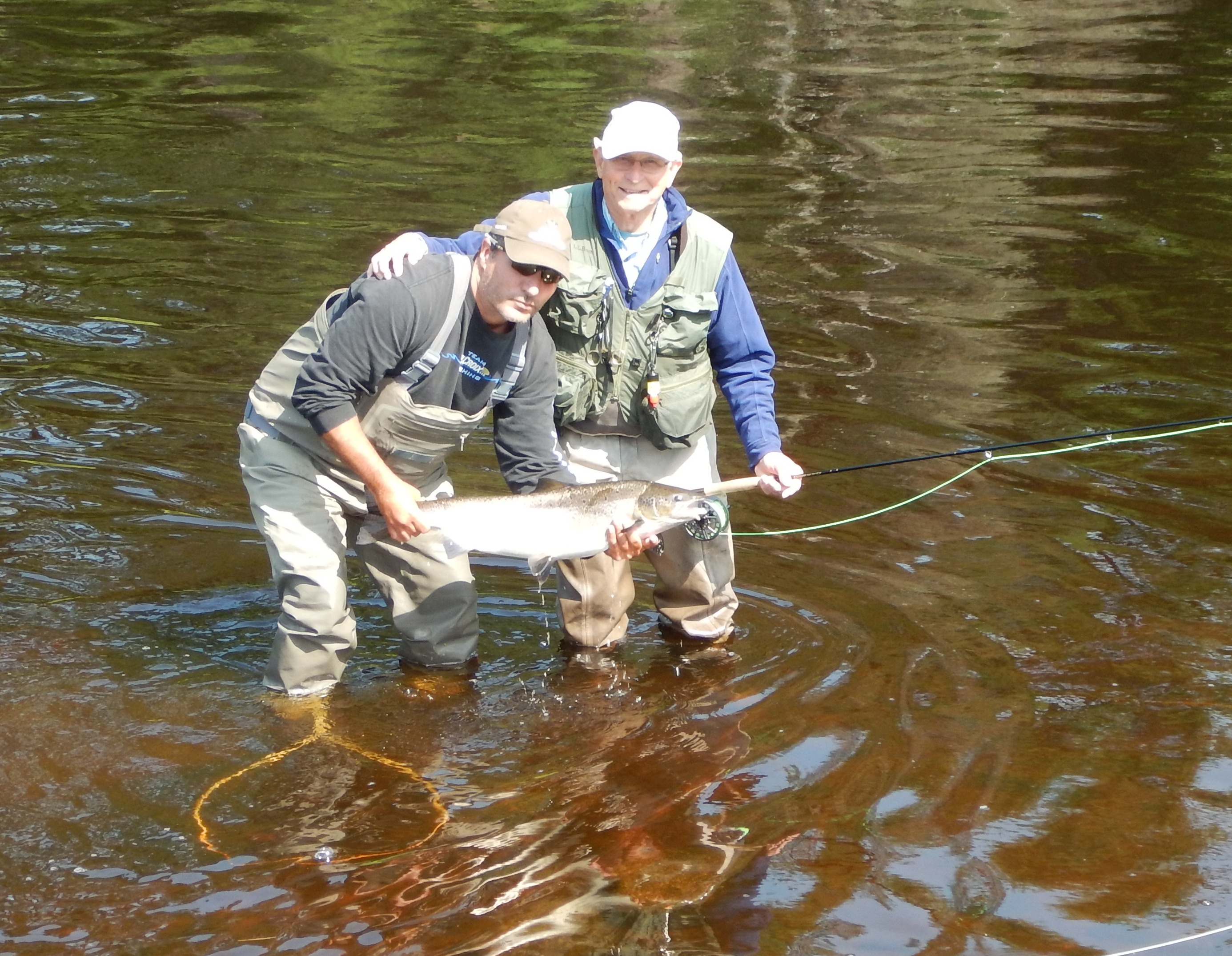 Over the rest of the afternoon’s fishing we bumped and rolled a couple of more fish that were obviously traveling up the river and saw a few jumpers.   There was a modest run of fish underway.

Day 2 – This afternoon was similar but with more action over on the Keenan side of the river. My friend Jim Graul got a nice fish at the top of the pool, and played with a good salmon down on the bottom.  I rolled a couple of fish and finally tightened up on one before we were called in for whisky.  I felt that the number of fish we were seeing was a bit disappointing, but it was late August, the traditional time of the smallest runs of new fish into the system.

Day 3 – We were fishing in rapidly rising water with quite a bit of silt. None the less I came tight on the Campbell’s side and rolled two other fish, but I would not consider there to have been very many fish on the move.  We also fishing for an hour or two on Friday morning, but the water was high and dirty, and we succeeded in rolling just one fish before leaving for Maine. 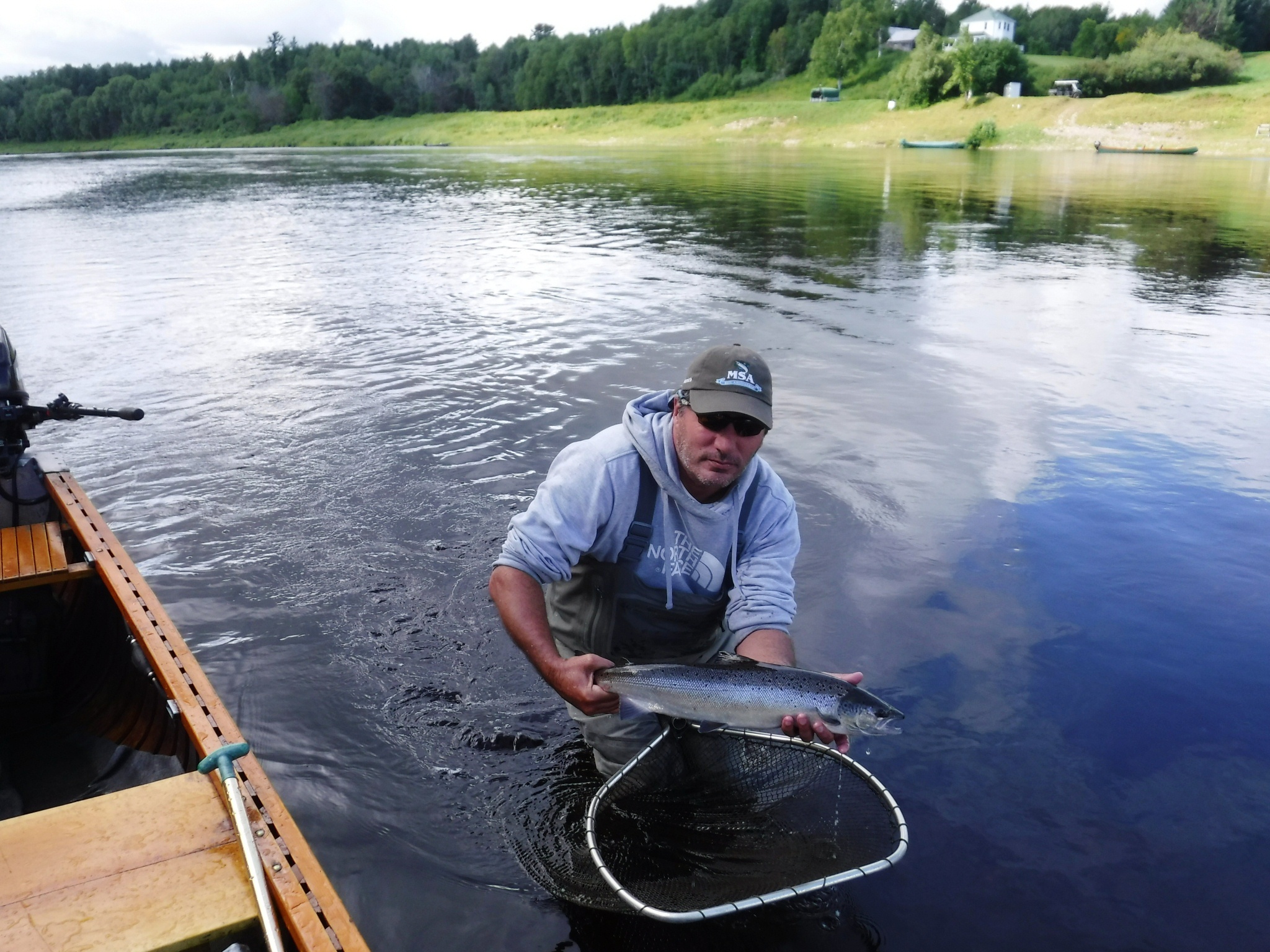 In the end for the 3 ½ days of fishing the two of us netted 24 salmon and grilse, plus we rolled, pricked or lost many more. The Miramichi system produced for us fishing on a par with Iceland or Russia.  It doesn’t happen all that often, but it is what the river is capable of.    There were four hen salmon estimated at 18, 17, 15, 14 pounds – great fish by any measure – and the rest were fat, feisty grilse.  We never saw a fish that I would have guessed to be in poor health, carrying fungus etc. and many of the grilse were right at that grilse/salmon differentiating mark of 24 inches.

The Millerton trap number for August 15 were also posted this week. There wasn’t much to inspire new fish to enter the river between July 31 and August 15, but none-the-less the count is progressing.  Here is the link. The salmon numbers are ahead of the last three seasons and right up there with the long term averages.  The grilse numbers are well ahead of the poor 2013, 2014 years, but they are far below last year and the long term averages.  We saw a lot of grilse this trip, so maybe we will see some recovery in these grilse numbers.

If we can avoid major floods that suck the run up the river prematurely we are looking good for the fall fishing. Certainly the Cains River from Mouth of Sabbies on down already has a fair number of holding fish.  This could bode well for a good run into the upper stretches of this most beautiful of salmon rivers towards the end of the season.  The poor water conditions of the last 5 weeks may very well mean that a large number of frustrated fish are just waiting in the Bay and estuary.

I’m told by the outfitters that when we have a warm water closure in mid-summer that many folks think that is it for the season, and will cancel or fail to book fall fishing.   Those fish are going to come at some time during the season, and if it wasn’t during the summer it will be in the fall.  It’s time now to make sure you book a few days in September or October to get in on the Miramichi fall fishing.  Bullock’s Lodge, Wilson’s, The Ledges, Country Haven, and Upper Oxbow over on the Northwest – as well as others I hope not to offend – all provide opportunities to enjoy the river during that special season that the Miramichi system has become famous for.