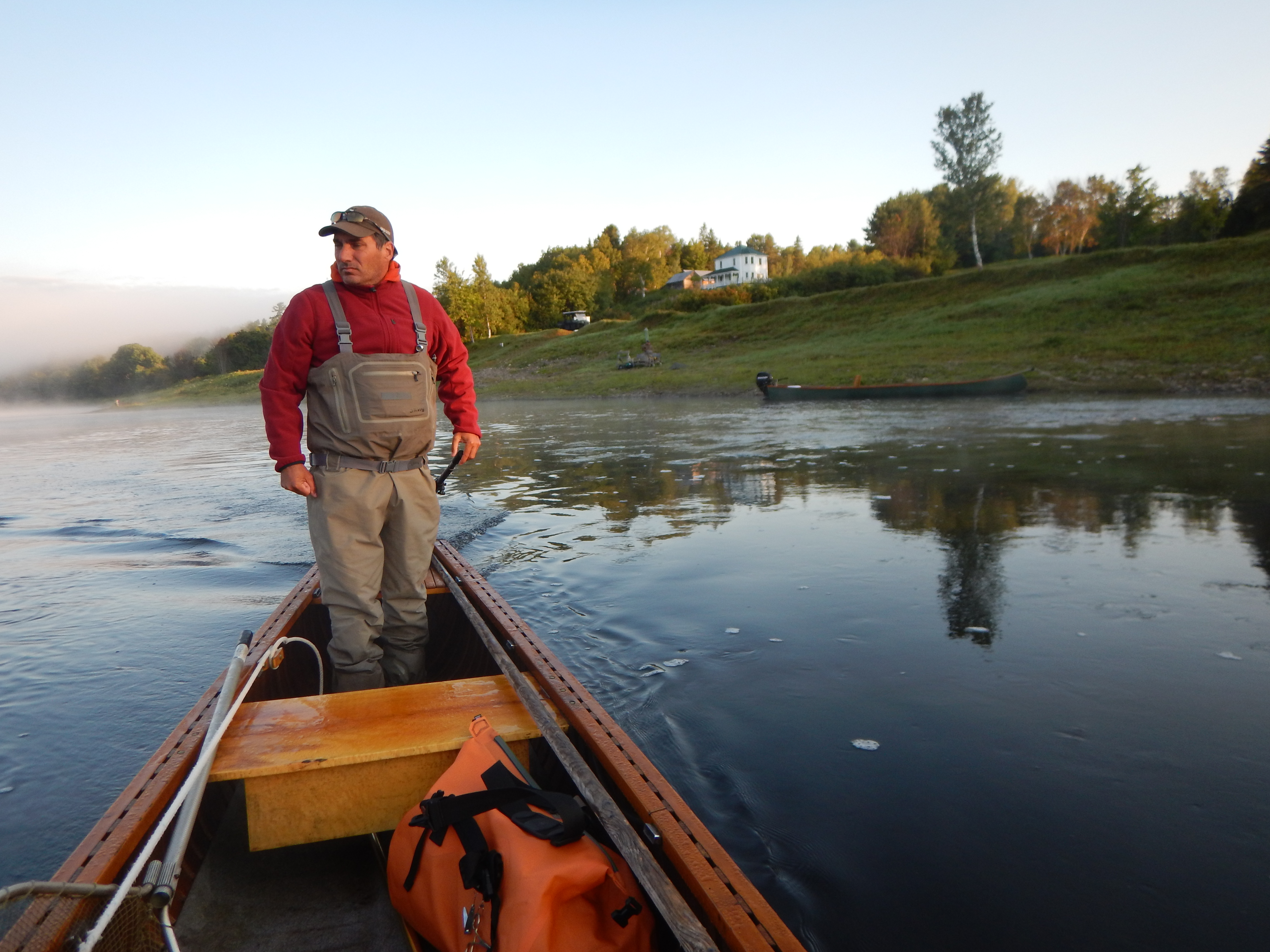 Guide Jason Curtis heading up to the top of Campbell’s Pool to begin the morning fishing.

Recent Fishing Okay, but Not Remarkable

I just spent 3 days at camp in Blackville fishing the Miramichi and the lower Cains. We had a decent raise of water from what seemed like quite a moderate rain, and I guess the ground up there – unlike here in Maine – was soaked from various rain events in late August.  In our section of the lower river there has been a fairly steady trickle of new fish coming in like the sea-liced cockfish in the picture below taken by Jennifer Curtis.  We hooked a fish or two each day on the MSW, but it was not fast fishing by any means.  The water needs to get a little lower to encourage more of these fish to hold, and that will probably be coming over the next week.

On the lower Cains a lot of the fish that were holding below Salmon Brook have moved upriver a ways. Country Haven’s guides reported catching salmon as far up as Moore’s Pool in Shinnickburn.  The timing is about right for the first ones there.  We did have a decent amount of fish holding in the stretch just above the mouth that we fish, but they weren’t easy to get.  Again we hooked one or two per angler most sessions.  It was an interesting contrast of conditions.  We were down to fairly small wets and 6 lb. tippet on the Cains.  I hooked a couple the first day on a sparse #8 black ghost.  By contrast we were using #4s out in the Miramichi.  Bombers were also effective on the Cains, and I had the best luck with a brown thorax, yellow abdomen bomber with brown hackle and white wings and tail.  They didn’t seem to want the green with orange hackle that had been my best fly two weeks before. 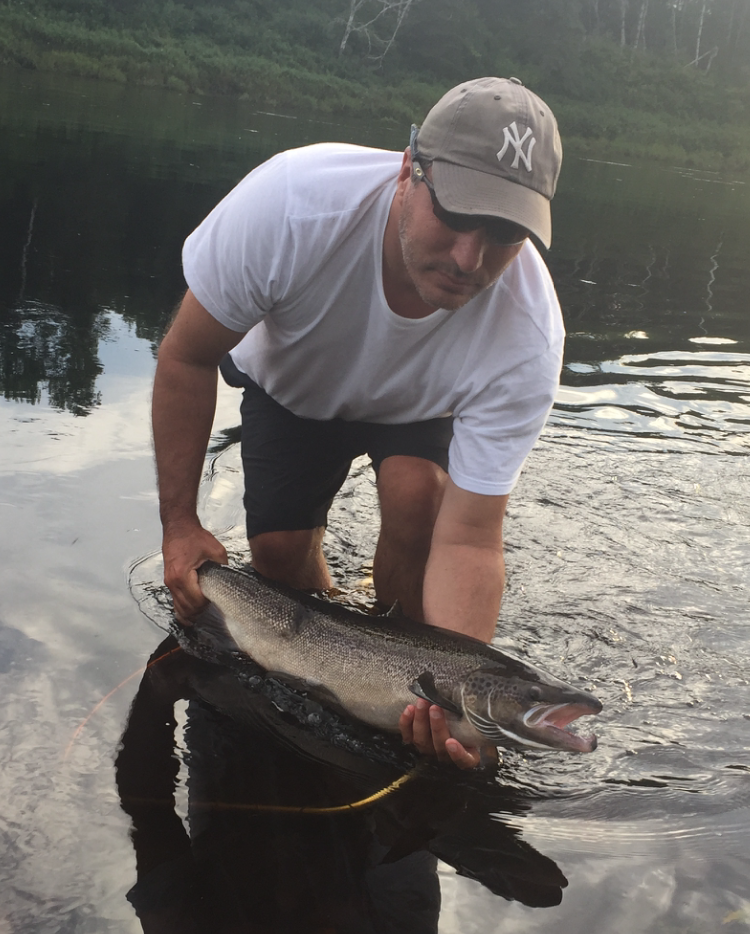 Right now we are biding our time waiting for the weather to really cool off and the first of the cold fall rains to kick the autumn fishing into gear. Statistically the fall run begins the second week in September and builds throughout the month with each week seeing a few more fish.   There is great variation in that pattern, though, from one fishing season to the next.

Here is the link to the DFO website page for the fish counting traps.  The numbers are updated through 8/31.  First the good news.  The salmon count of 540, which at a 5% average efficiency suggests that around 11,000 salmon have already entered the MSW Miramichi, is quite good.  It is essentially equal to the average year in the 2003 through 2012 time frame, and it is better than the numbers year to date from either 2013, 2014, or 2015. The Northwest is also doing well in the salmon category.

Grilse, while not terrible in the MSW Miramichi, are fewer than 2015 and considerably less than the long term averages. The grilse run in the Northwest is even further behind the long term numbers than in the MSW.   We shall see if that gap gets closed a little over the remaining six weeks.  The statistics right now would indicate that more salmon have returned to the Miramichi system than grilse – the efficiency of the Millerton trap is 10% on grilse – twice as high as salmon – indicating a return so far to the MSW of about 7,500.  Note that these efficiency measurements vary greatly year to year and I am only quoting long term averages which could be off considerably.  None-the-less, anecdotally we are catching and seeing a lot more grilse than we are salmon, in fact I would say that the mix is more or less the same as the usual 2 grilse to 1 salmon mix.

The big news here is that the DFO is going to allow an expanded harvest by the First Nations People. While the press release did not say it specifically, we hear that they will be able to sell the fish.  The DFO is going to “negotiate” a quota and means of harvest – net types etc.  First Nations People are said to have stated that they would give up their salmon quota – considering the state of the runs – if they could have a larger harvest of striped bass.

The recreational season and bag limit is also going to be expanded, and it starts with continuing the open season right through October 31 of this year.

My personal suggestion and hope is that they will additionally eliminate size, season and bag limits of striped bass caught above tide water in the Miramichi. In my view this would do nothing to harm the population of striped bass, but it would remove many that would otherwise spend the summer up in the river eating first smolts and then parr. We catch 6 or 8 stripers per year at Campbell’s and Keenan’s in a normal year.  If you multiplied that by 200 such pools between Boiestown and Quarryville, and then figure that the average bass might eat 100 parr a summer, we could be talking about 140,000 parr or so!  Now that is as unscientific a measurement as could be made, but without a doubt the number would be a big one, and achieved by eliminating an immeasurably small percentage of the overall striped bass population.

The Miramichi Salmon Association and Atlantic Salmon Federation have both constantly advocated for an expanded harvest of striped bass. Their joint work on smolts in the Miramichi has indicated predation by stripers on the smolts.  Without the prodding of these organizations I doubt DFO would have acted as quickly as they have.  This is just another reason that the MSA and ASF deserve our membership and support.