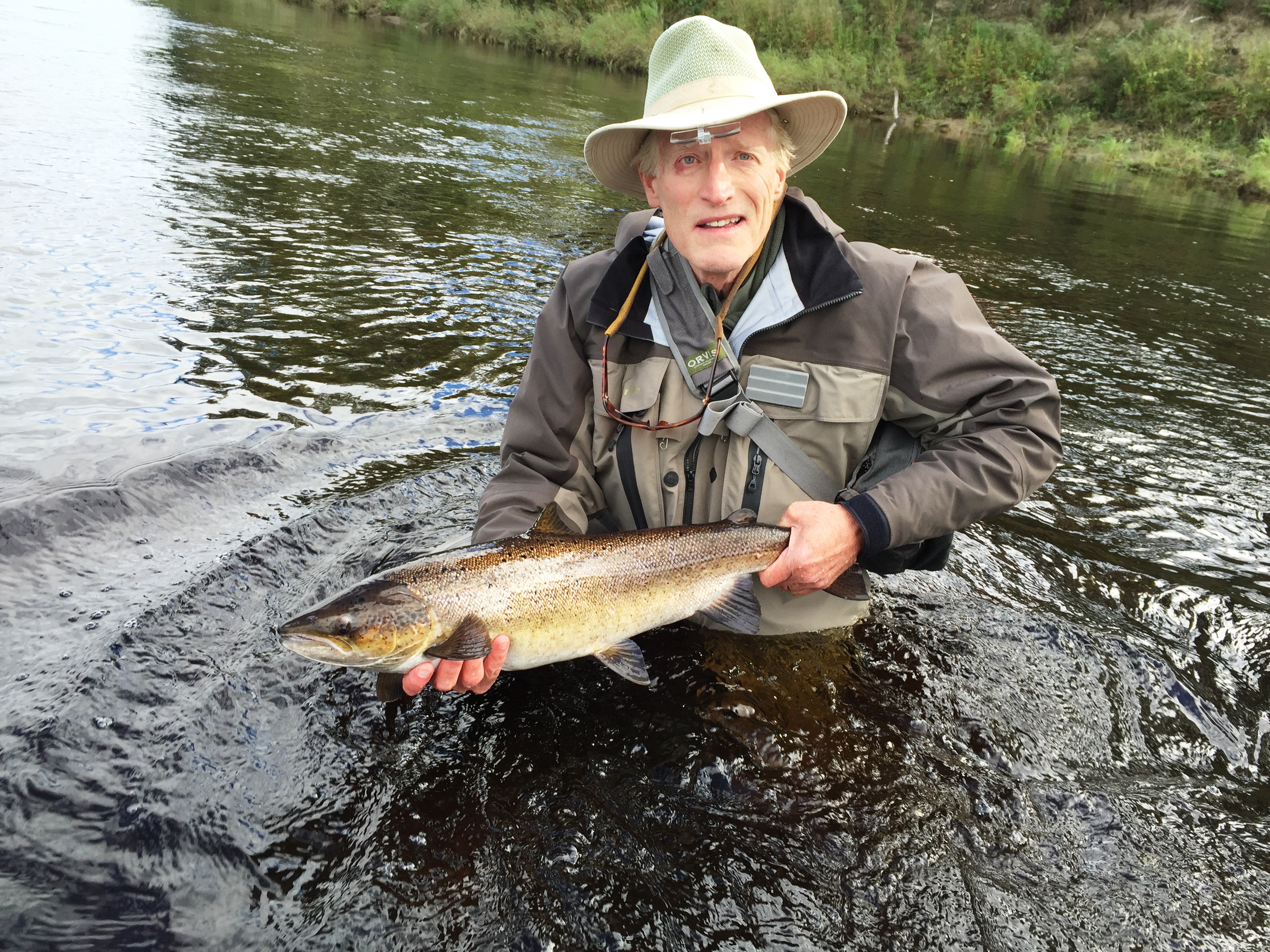 Jim Lukens with his first Miramichi salmon – a good start!

Another Week of Back to Back Raises 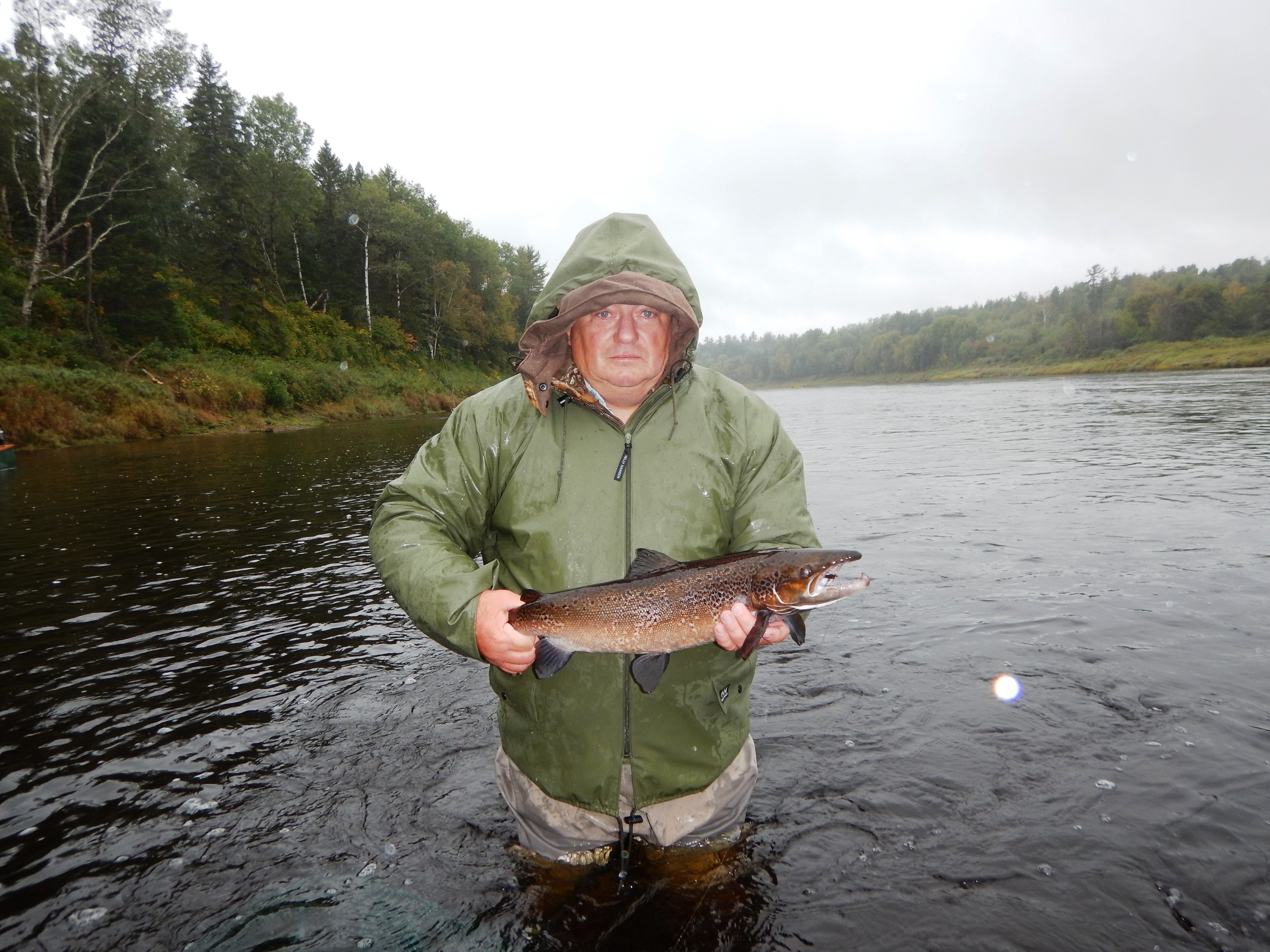 We had 40mm of rain over the Miramichi and Cains River watersheds just before last week’s trip, and it brought the water level to 1.6 meters on the Blackville gauge. That was the most substantial raise in a while.  The water then dropped fairly quickly only to receive a half inch of rain again on Friday.  I’m not saying this is all bad, but every weather scenario has its effects on the fishing.  Normally speaking a raise will move all the holding fish in the pools further upriver, and it will bring in fish that are ready from the estuary.  These fish are all on the move and are notoriously hard to catch while the water is rising.   Raises will also dirty up the water, and even after the water begins to fall it is usually not great catching until things clear up a bit.  To some degree we had those problems this last trip – twice! 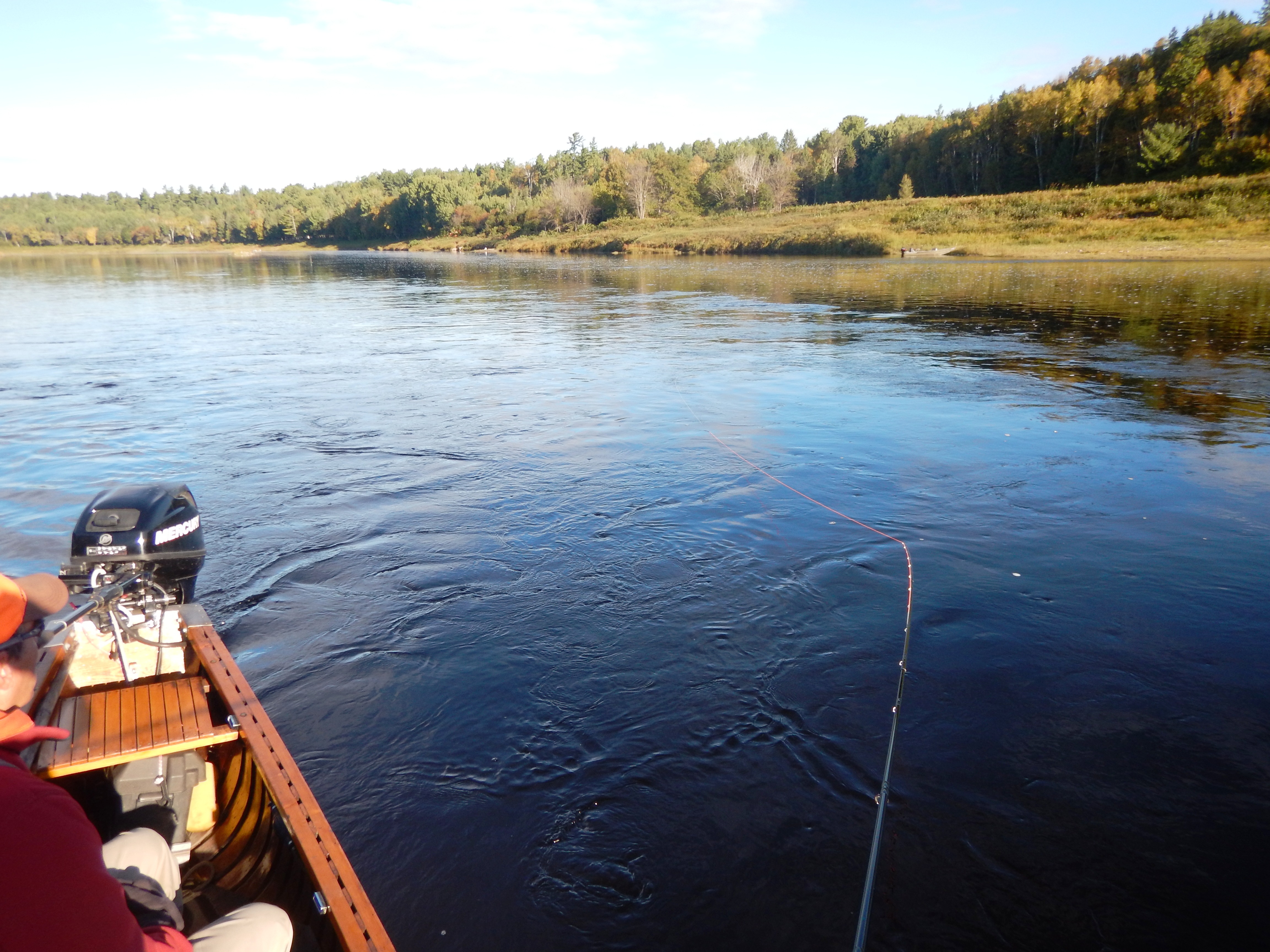 Fishing The Great Lie at Keenan’s

Thursday was tough with fairly high and dirty water. Friday was the best day, with a steady stream of fish moving upriver under the cover of the rain and cloudy darkness – man do I love rain when I’m salmon fishing.  We had targets all day long, and though we only landed an average of one fish each there was action throughout the day.  On Saturday the river was again rising slightly, and there were less fish around than the day before.  We did okay, though, with fish from both the Cains and the main river including a 12 pound salmon.  So far this fall we have not had our share of those massive fall hens or Godzilla hookbills.  The prime time for those big fish is now at hand, and we’re heading back up Wed. and will be ready.

The Finest Hour Is At Hand

The water temperature coming out of Otter Brook was 46F on Thursday morning, and we had frost on three out of the four mornings in camp. The main river water was 51F Sunday morning and the time for big flies at hand.  We broke out the #2 October Killer, and most fish were taken on that fly, though we also connected with a #4 black bear green butt and even a #6 green machine flash tail in a quieter main river pool.

The crème de la crème of Miramichi salmon fishing in the minds of many is that time when the run in the Cains moves towards the headwaters. The pools above Muzzerol only see dependable numbers of fish during the last two to three weeks of the season.  Jason Curtis says that it seems fish can just run up the main river, but in the Cains the fish seem to move upriver by inches. 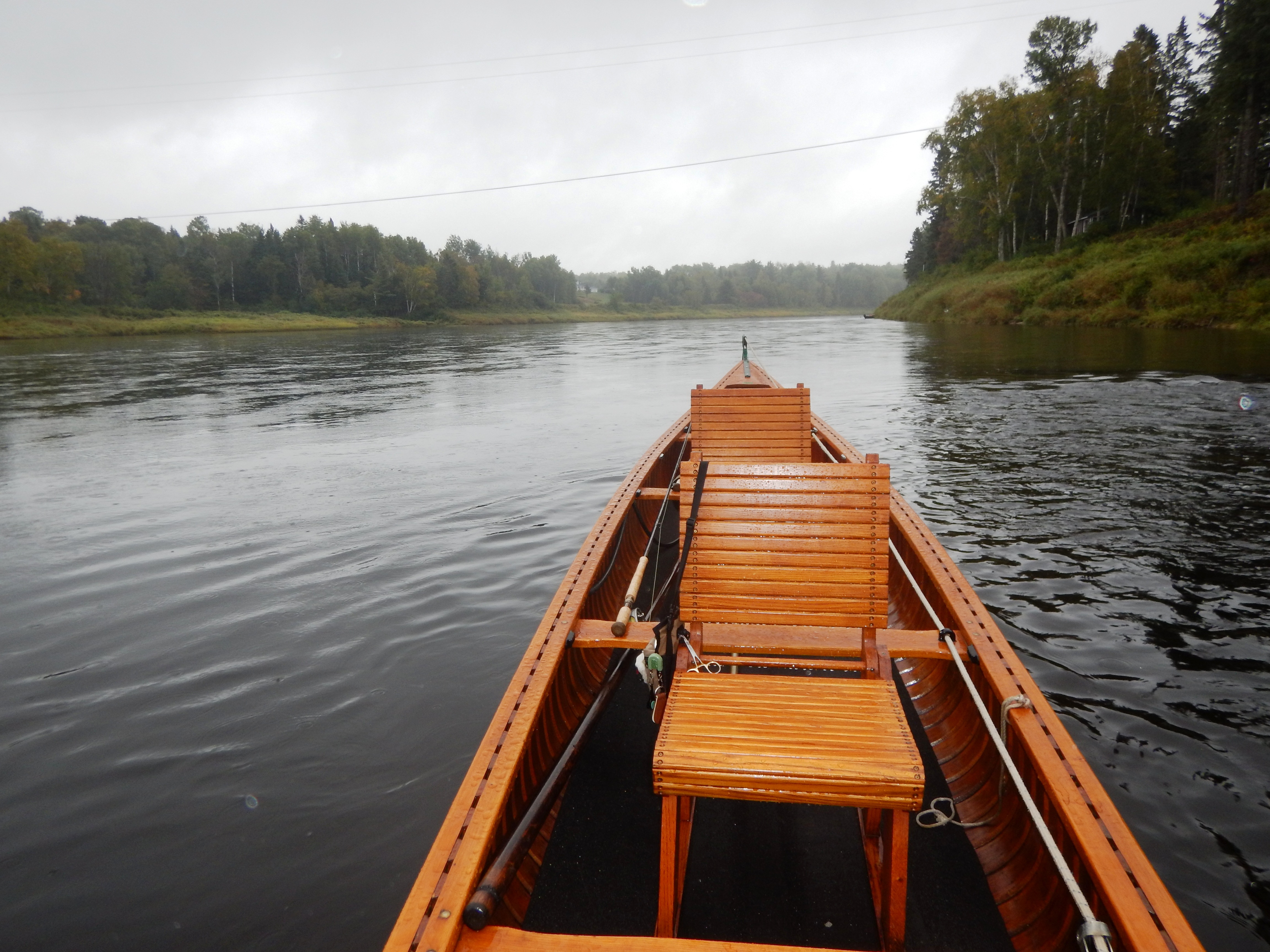 The Miramichi itself can also be good to very good during this time – statistically the biggest week of the fall run is the first week in October – and one can hardly know where to turn because of all the great choices.

Here is the link to the DFO website page for the fish counting traps.  The numbers are updated through 9/15.  The salmon count for 2016 is the best since 2011 and well ahead of the averages for the last decade.  The Millerton trap grilse numbers, while much better than 2012, 13 and 14 are behind last year and about half of the long term averages.  On the Northwest Miramichi grilse numbers at the barrier are slightly ahead of last year, but the Cassillis trap counts for grilse are far behind 2015.  The implications of this are confusing and a bit worrisome, but it is the big fish that will lay the eggs, and we can take some comfort in that.

We continue to catch and to see considerably more grilse than salmon, so I am not yet convinced that the final totals won’t be closer to normal. We’ll do a full wrap up on those trap numbers when the season is over.

At a dinner in Doaktown on Saturday night October 1 six of well-known Miramichi salmon fishing professionals will inducted into the Atlantic Salmon Museum Hall of Fame. I will be there with a table of guests, guides and friends.  Last year’s event was great fun.  Here is a link you can check to see if tickets are still available.  http://www.atlanticsalmonmuseum.com/hall-of-fame/ 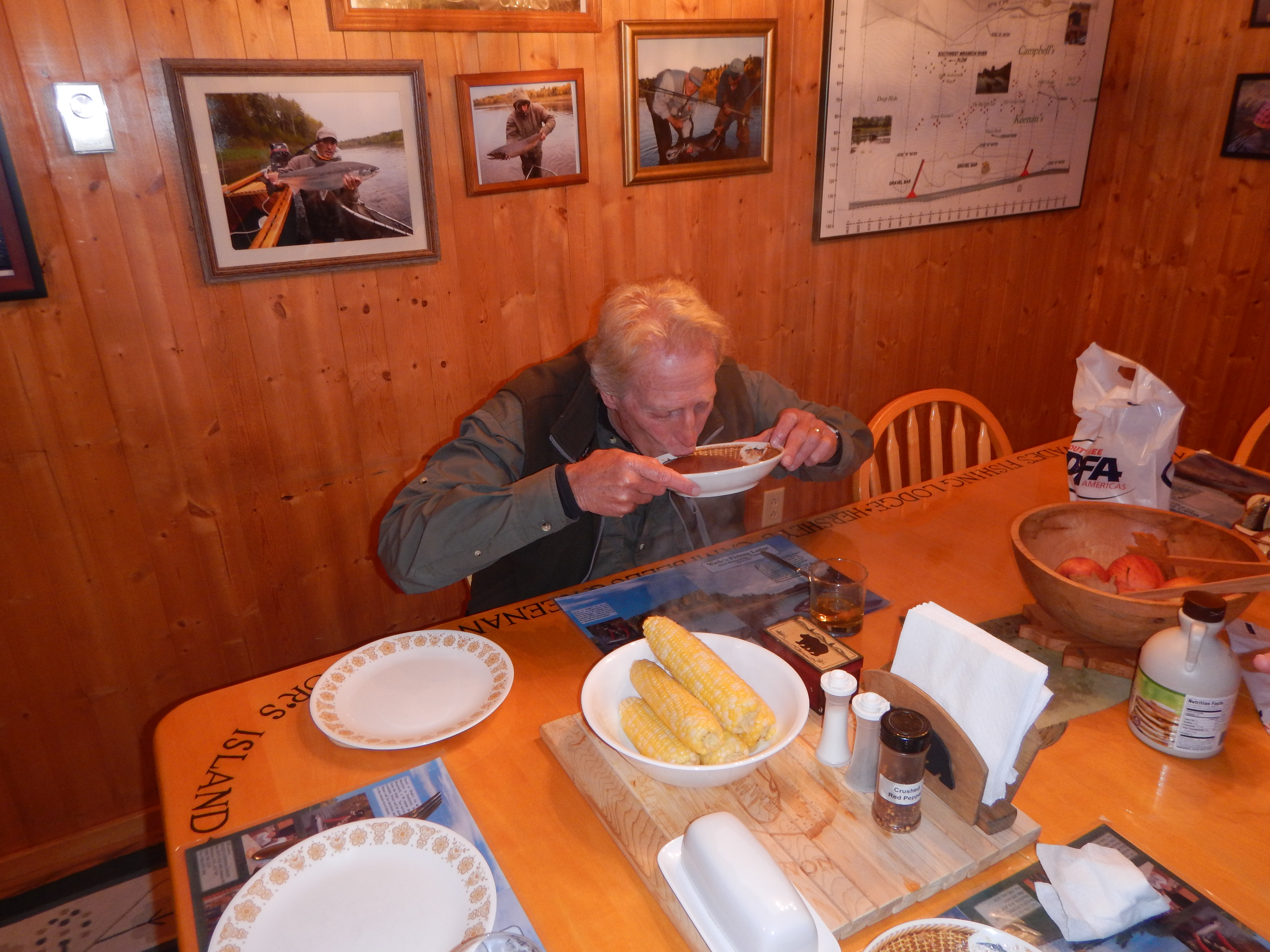 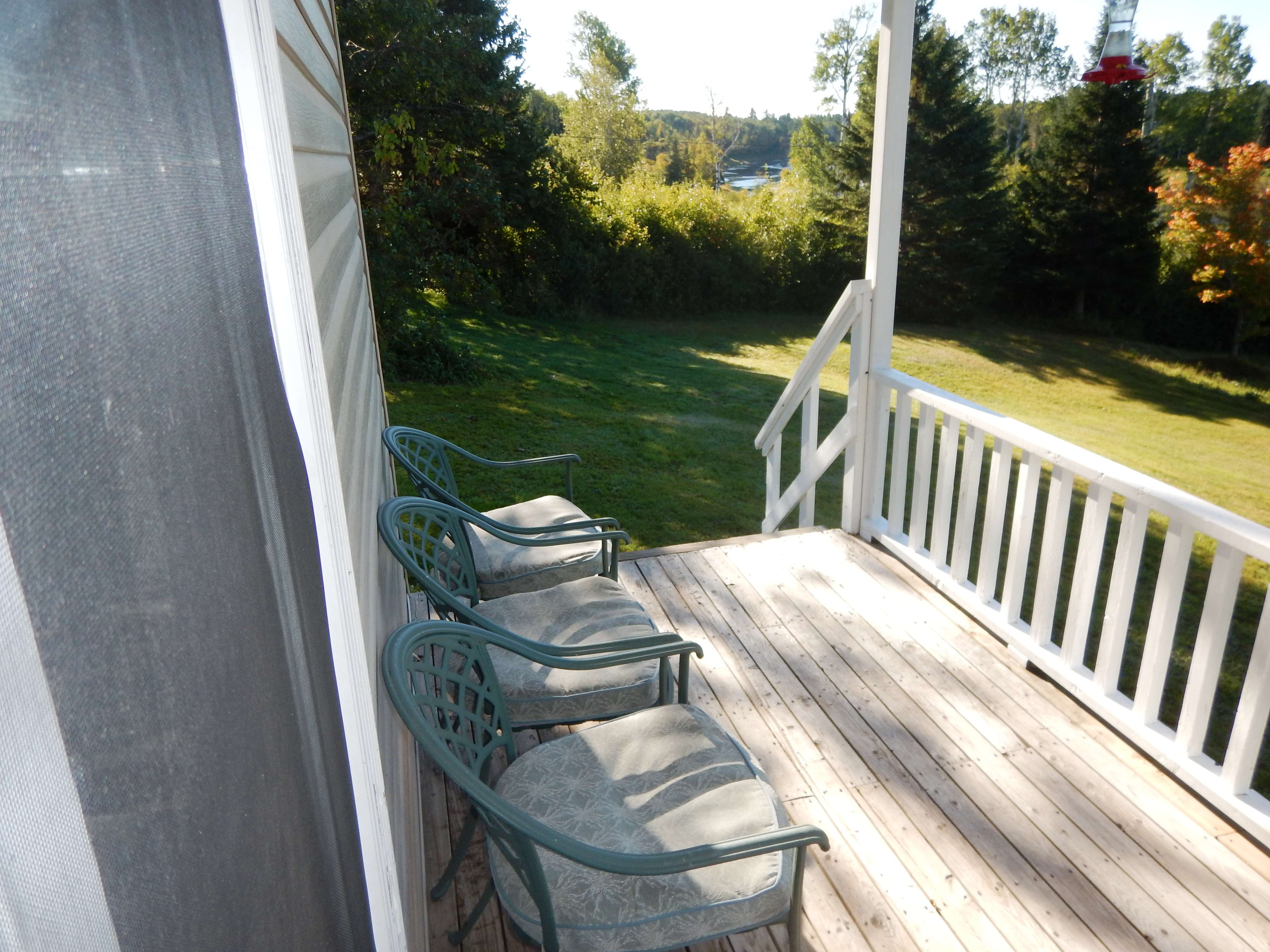 The Cocktail Deck On Sunday Morning – Hate To Leave!