View down the magnificent George River in Nunavik

On the Miramichi, last week some relatively cool weather and rains brought the water levels up and temperature down enough for DFO to reopen the cold-water holding pools to fishing on August 11.  You can see from the graph pasted in below that the water temperatures got down for two consecutive days to the below 20C/68F level needed to reopen the closed pools. 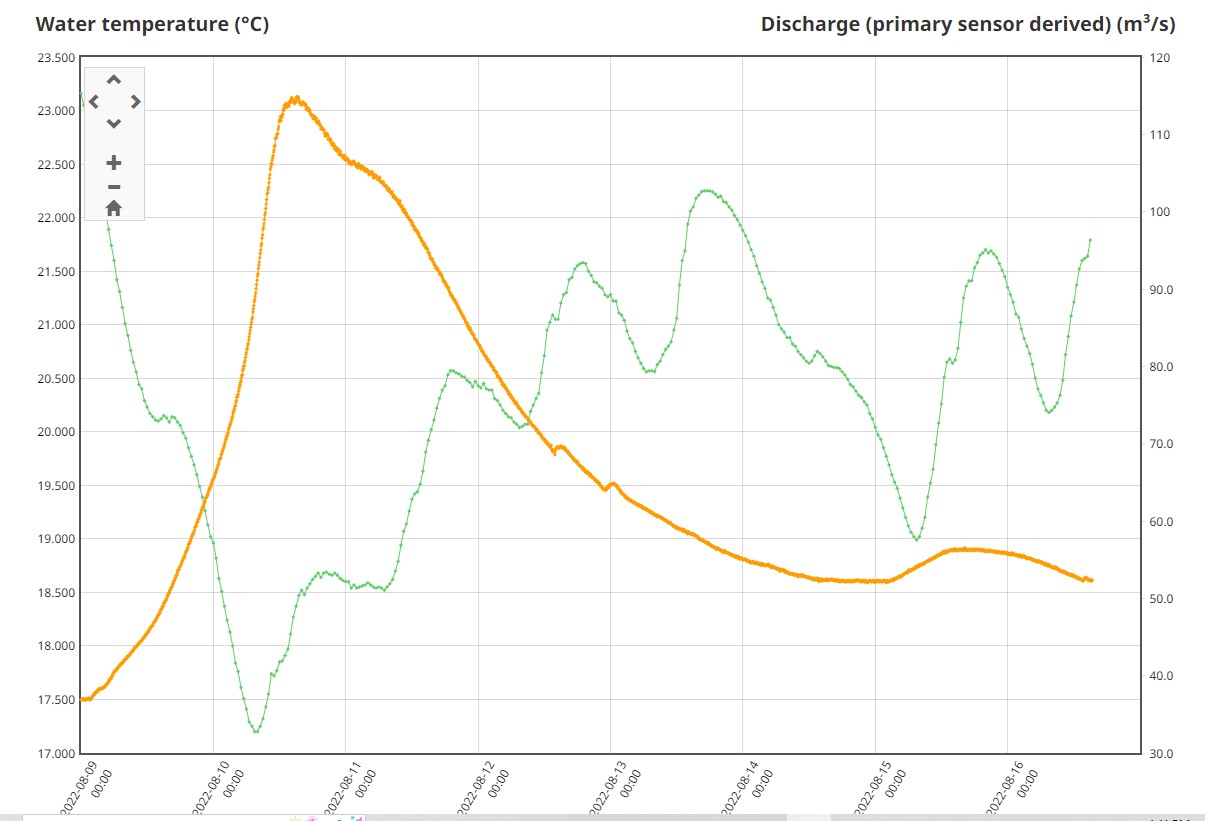 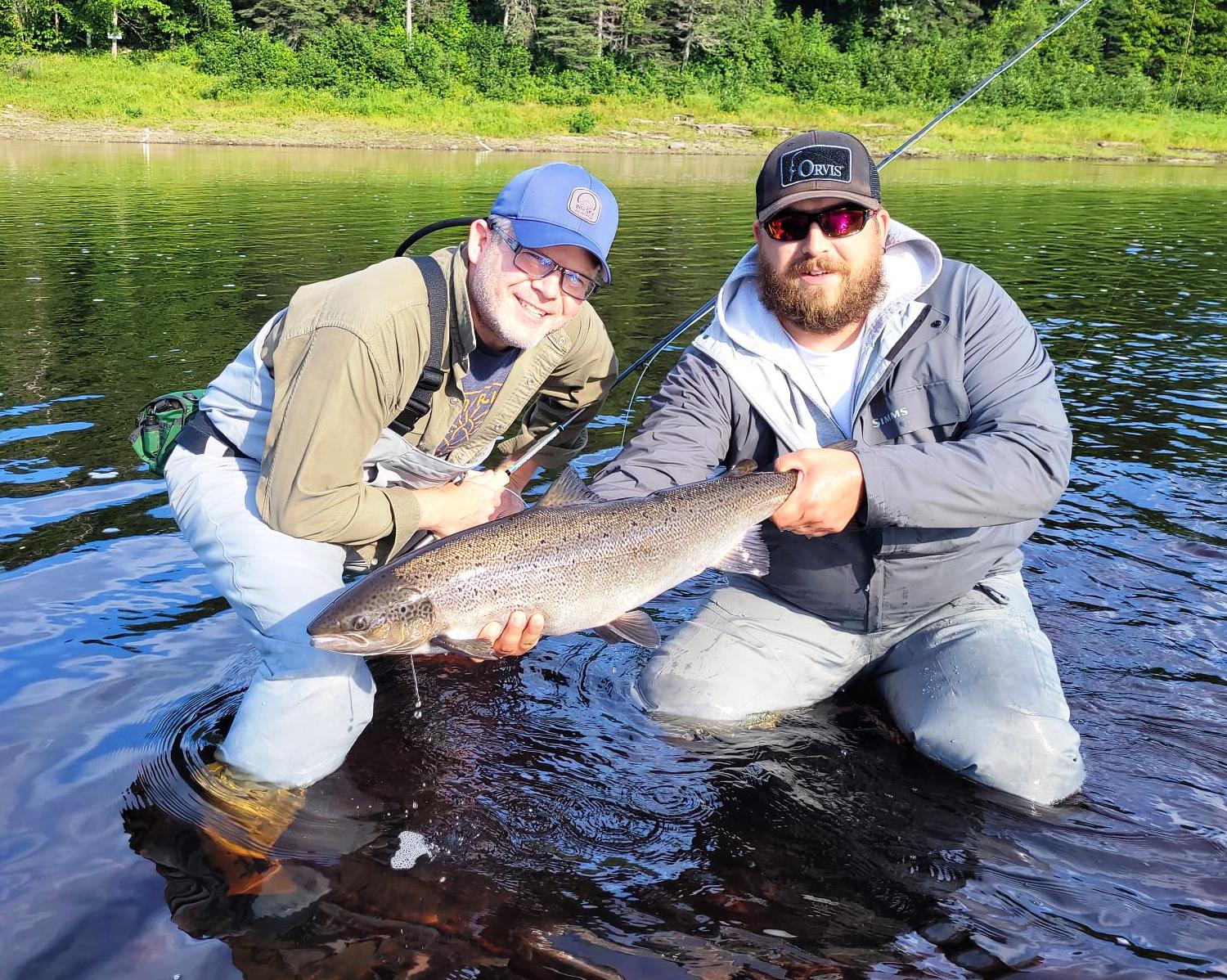 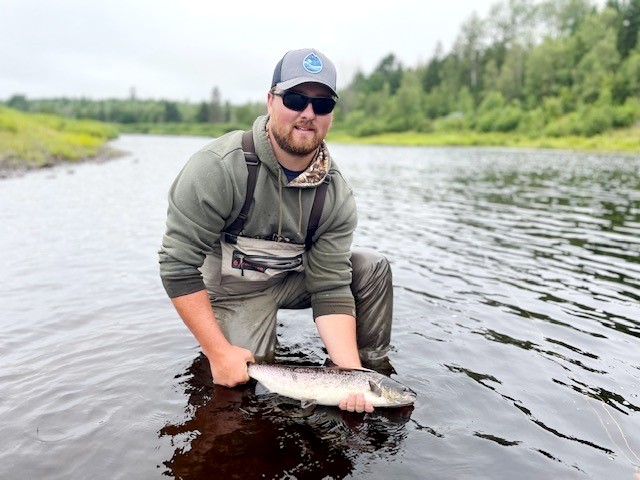 Current water temps, though, are not really cold at all, and while there is no current danger to salmon survival fishing will be spotty at best, and then mostly in the cold-water holding pools.  It is a great improvement, though, from the continuously overly-warm conditions of the last month.  It is forecast to be warm with rain for the next few days, then more or less normal through the end of August.   Perhaps the silver lining will be that we have an improved fall run compared to last year when too many of our fish came into the river during the summer on high, cool water.

David Donahue, who lives just above Doctor’s Island sent along a couple of pictures of the V-wakes of salmon moving up the river.  These have been few, he said, which is typical of this time of the summer.  Eddie Colford of BBSC said that all the fishing is on the brook side, with quite a few fish heading up into the Cains.  Tyler Coughlan of Country Haven reports some good fishing in the Cains with many of the smaller pools upriver now holding a few fish.   He saw two jump a night or two ago in front of their lodge.  The lodge is on a big steady in the river, and these, he thought, were probably fresh fish moving up.

The Millerton and Cassilis trap numbers for August 15 were posted this morning, just after I finished the rest of this blog, but I’m going to fit them in right here.  The short of it is that the Millerton salmon count at 251 is now virtually the same as last year’s 254.  Last year we had great conditions throughout the summer, and most believe that it coaxed the fall run up the river early.  That definitely has not happened so far in 2022 most likely due to the consistently warm water temps.  The grilse numbers at 455 are a little more than half of last year’s returns through August 15.  That 455 number, though, is about average for the last 12 years, and there is still a chance that the fall returns will be above average.  I’ll be looking forward to getting on the river in early September to see the rest of the season unfold firsthand.  The Millerton trends were more or less mirrored by the Cassilis trap.

On the current smallmouth bass front, it seems like the renegade aboriginal factions who blocked last year’s rotenone application, are now being joined by some of the Miramichi Lake camp owners, who are suing the North Shore Micmac District Council – the prime proponent of the eradication.  The Miramichi Salmon Association is participating in the legal defense of the eradication plans that will be heard in court today, August 17th, in Woodstock, NB.  One has to wonder what the camp owners are complaining about.  Perhaps they think it is simply their god given right to stock the lake with non-native species that have the potential to destroy the Miramichi’s Atlantic salmon population?  We sure hope and expect that this latest attempt at throwing a wrench into the plans that have been painstakingly developed in complete accordance with the required governmental process will fail to halt the much-needed eradication procedure.  The government should have done it 10 years ago when then MSA president Mark Hambrook asked them to do it. 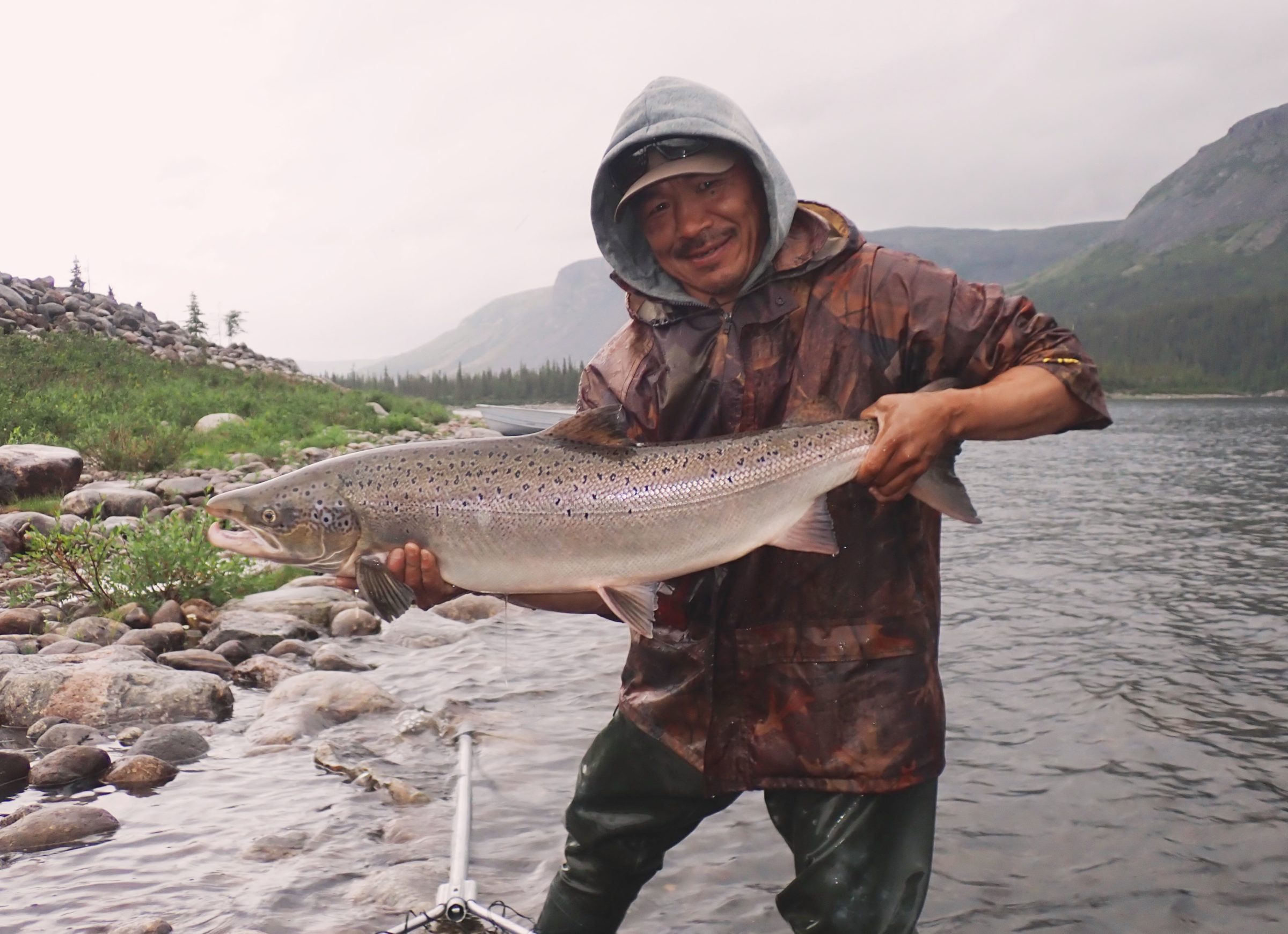 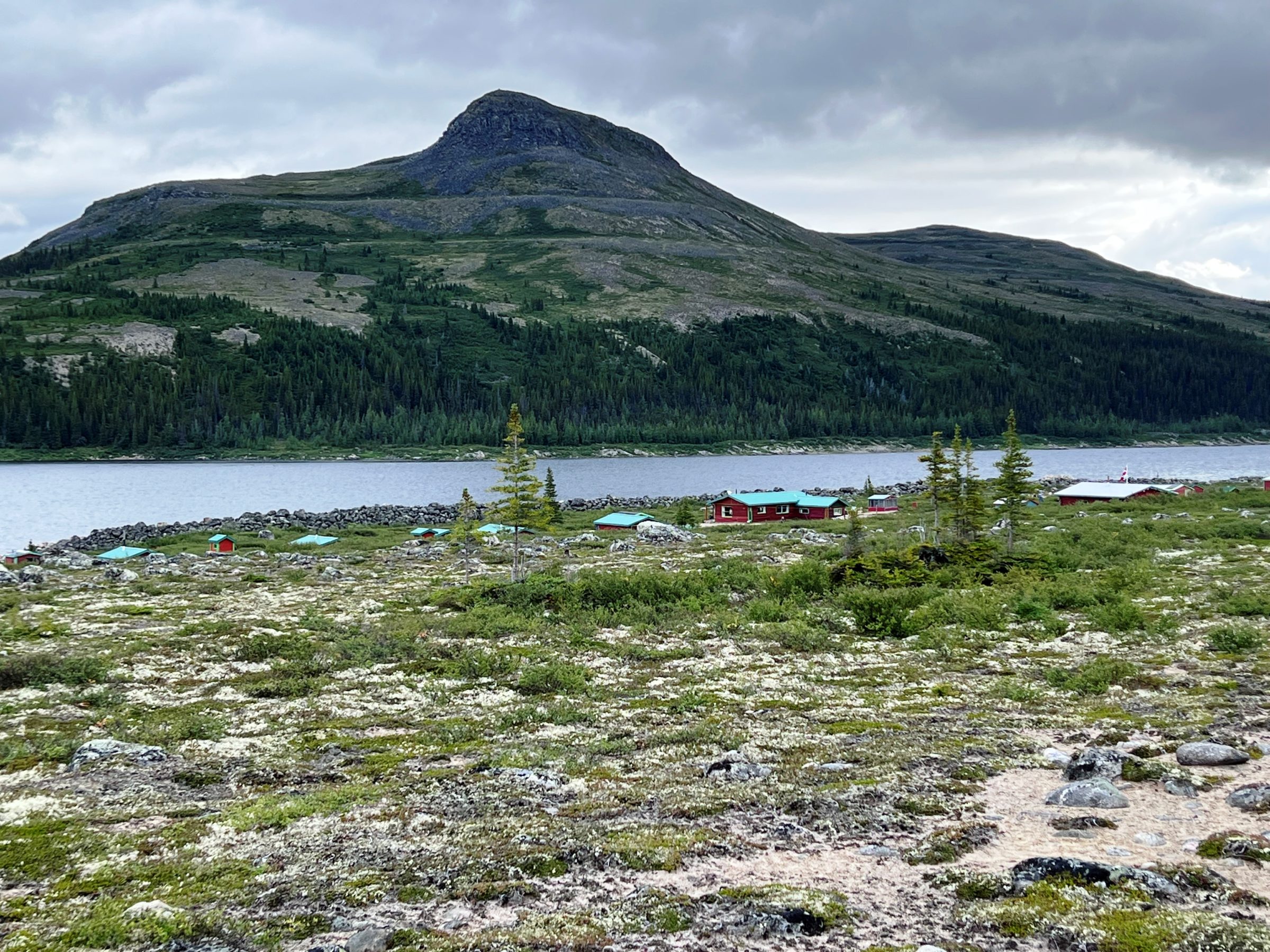 Pyramid Mountain and its namesake camps on the George River 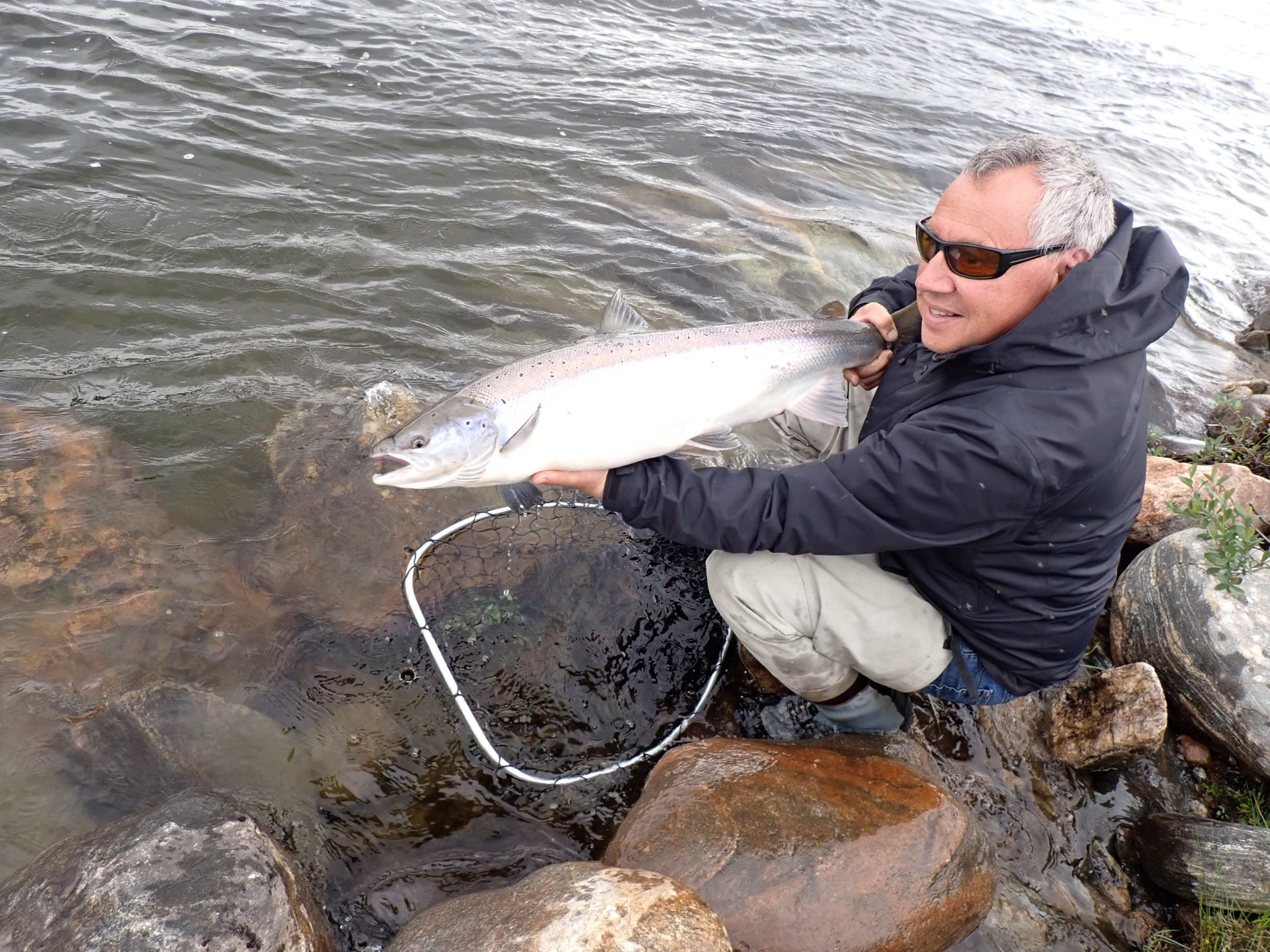 Fishing Ungava Bay’s George River salmon run has been on my wish list for a long time.  At one point a few years back I was trying to get a group together to fish the famous Hellen’s Falls lodge, but the booking was canceled, and shortly after the sale of the lodge was announced.  Before covid I got an invitation to fill a slot in a group headed to Pyramid Mountain which is another 50 miles or so upriver from the huge cataract that is Hellen’s Falls.  Interestingly to me, the Hellen’s Falls camp was first constructed and operated by Bob May Sr.  Bob May Sr. sold Hellen’s Falls in the 1960s, then got the lease for Pyramid Mountain and constructed the camps there.  Today these same camps and lease are operated by Bob’s son Peter May who is now bringing his son Henry into the business.  Peter is of 50% Inuit blood, a requirement for being a lease holder.  His Inuit grandmother grew up in the George River settlement and talked about the time the white woman in a long dress passed through the settlement.  This woman was Mina Hubbard after her historic trip across Labrador and down the George River – this story is told in Great Heart: A Labrador Adventure.  In fact, it was Mina Hubbard who named Pyramid Mountain, saying that it reminded her of an Egyptian pyramid. 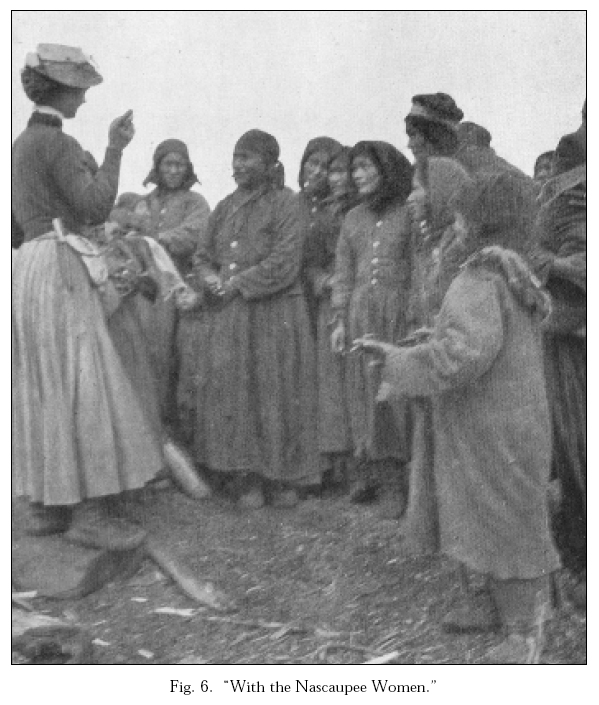 The George River is a very large and brawling river that’s size and power is unlike any river in which I have ever fished for salmon.  The river is often a half mile wide, and evidence of its power is everywhere as the shores are made up of rocks, some uniformly bigger than medicine balls, often piled in wind-rows hundreds of yards long and 50 feet high.  In fact the river is so large, deep, and fast flowing that all the salmon fishing is essentially done along the edges.  Here and there along the river’s course are edge waters with the right depth and water speed to make for good salmon holding water.  Occasionally there are gravel bars located in such a way that they regularly survive the spring floods, the river’s salmon spawn on some of these. 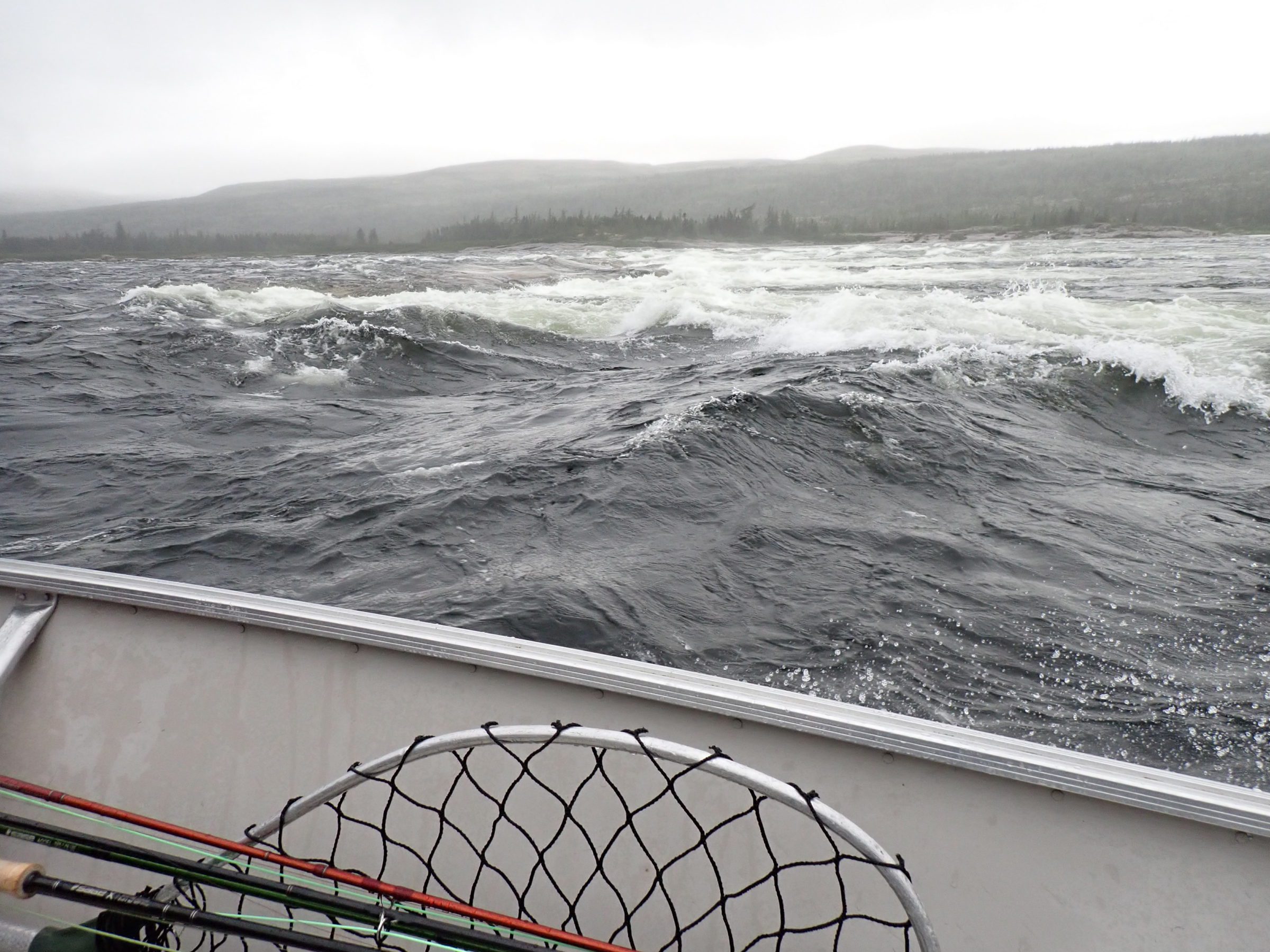 Imposing, standing waves at the head of a George River rapid 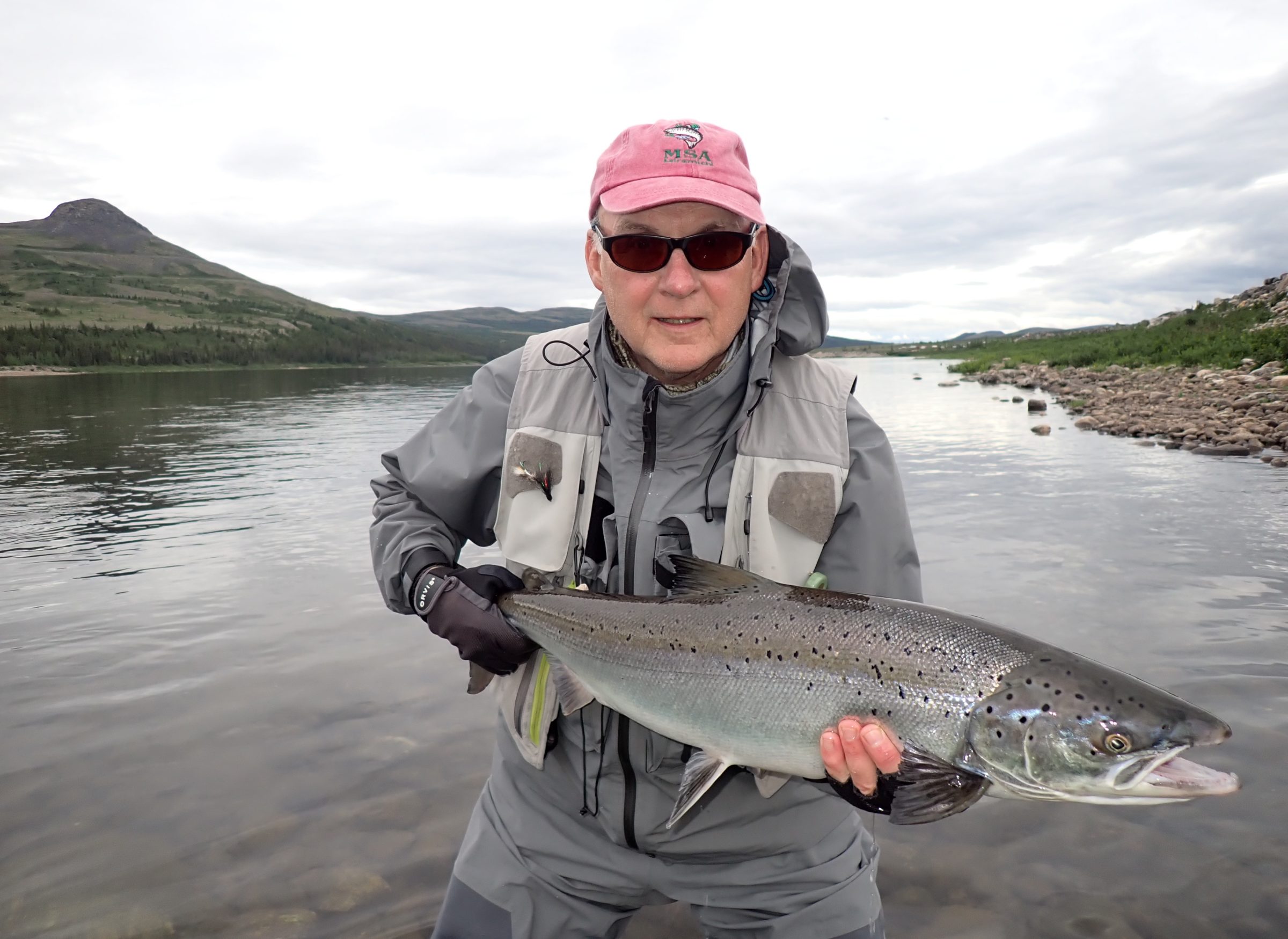 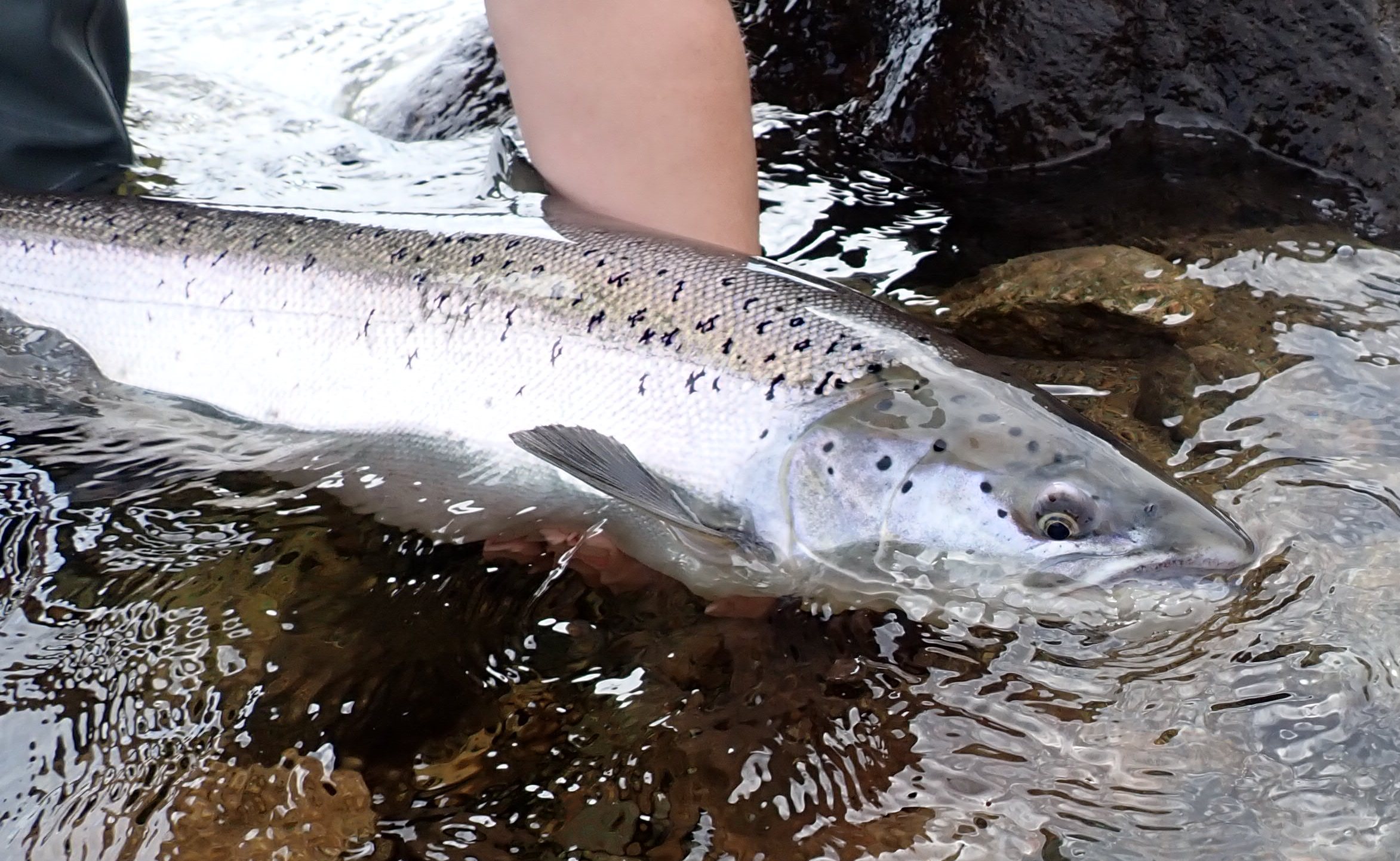 In the off-season Peter May works for the government as a wildlife technician with a specialty in assessing the age of the fish in the waters of Nunavik, the area of northern Quebec set aside for self-government by the Inuit people.  Peter knows a lot about the George River salmon biology, and claims that the run is largely comprised of 2 sea winter salmon both male and female.  There are far less grilse than 2 sea winter fish, virtually no 3 sea winter virgin spawners, and very few repeat spawners.  The two-year growth rate varies considerably, and the fish can be anywhere from 10 to 20 pounds though they are of the same 2 sea winter age.  The difference may be in the age and size of the outgoing smolts.  The Miramichi sends out smolts at 2 years of age that average 4.9 inches in length.  I caught parr in the George – and it was full of parr – that were 6 to 8 inches long, and these parr are 6 or 7 years old at the time they smolt.  Peter May says that George River smolts often reach more than 10 inches in length as they head to the sea.  A smolt 10 inches long has to have an incredible advantage in the ocean compared to one that is only 6 inches.   Fish larger than about 20 pounds are very rare, and Peter attributes this to the very low survival of kelts that would return to the river as bigger fish.

We were there on the first week that Pyramid opens for the season, and they only are open for 6 weeks.  The fish were all fresh as daisies, were within a couple of pounds either way of 15 pounds, and I had one memorable fight after another.  I saw again, in the course of the two dozen or so salmon that I hooked in six days of fishing, virtually every high jumping, gray-hounding, side-skipping, and summersaulting maneuver that I have ever seen performed by a salmon.  Some did all that jumping plus ran off deep into the backing.  I imagine the DNA of these fish dictates a rugged, muscular design, shaped by nature to battle the long, powerful rapids of the George. 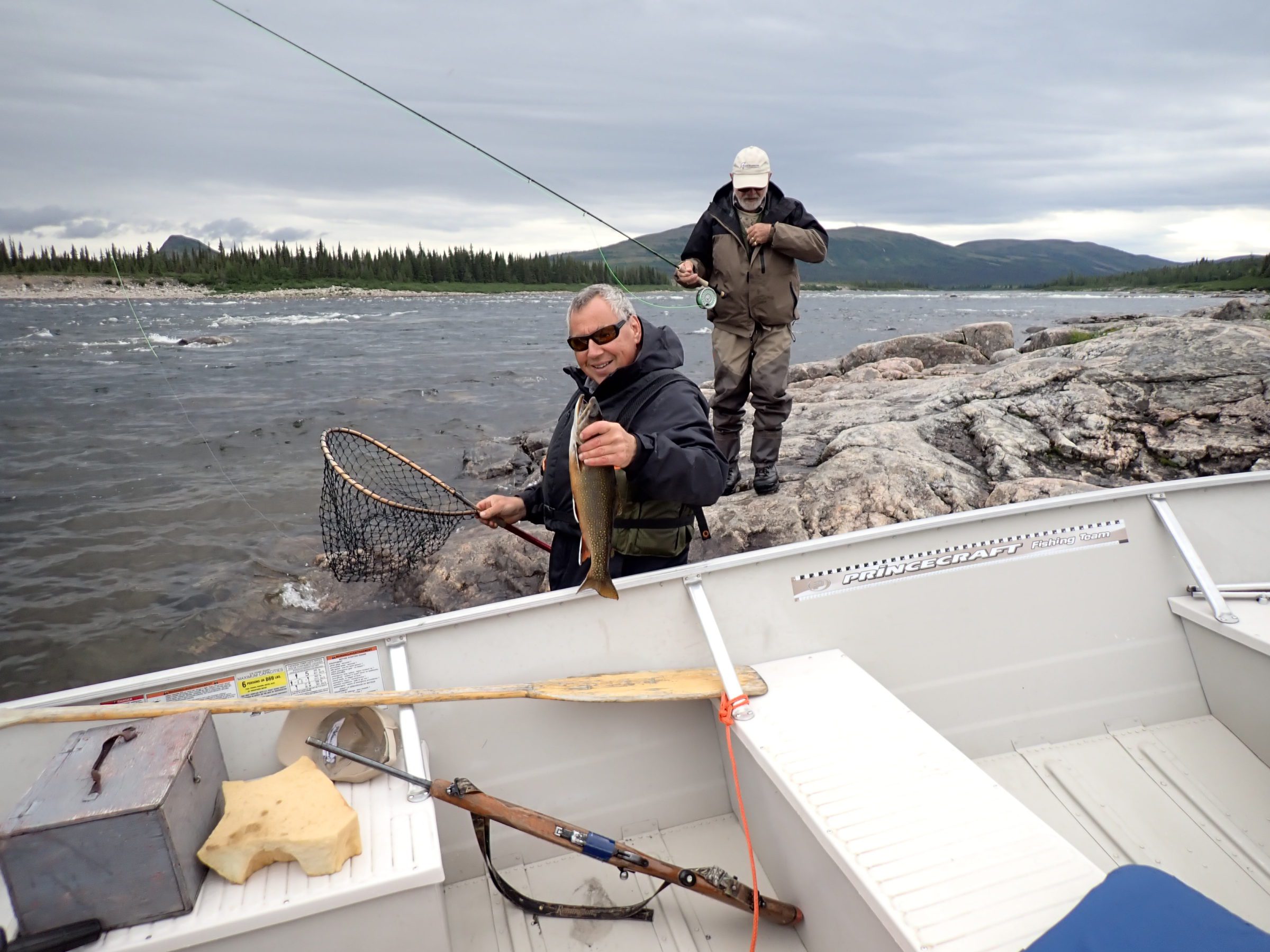 Peter May holds angler’s brook trout destined for the smoker. Brookies from 1 to 5 pounds exist in enormous numbers. Little Pyramid Mountain in background to left. Peter ran a small “upriver camp” there for his father 40 years ago. They went back and forth in 20-foot Chestnut canoes and 18 HP Johnson motors. Not a ride for the faint of heart.

When in Rome, do as the Romans, as the saying goes, and Peter May is an excellent fly tier, caster and fisherman.  He greatly favors fishing a muddler or white-tailed green machine tied on with “the hitch.”  The hitched flies plane along the surface of the rapid water, and many of the salmon chase them wildly for yards before connecting. 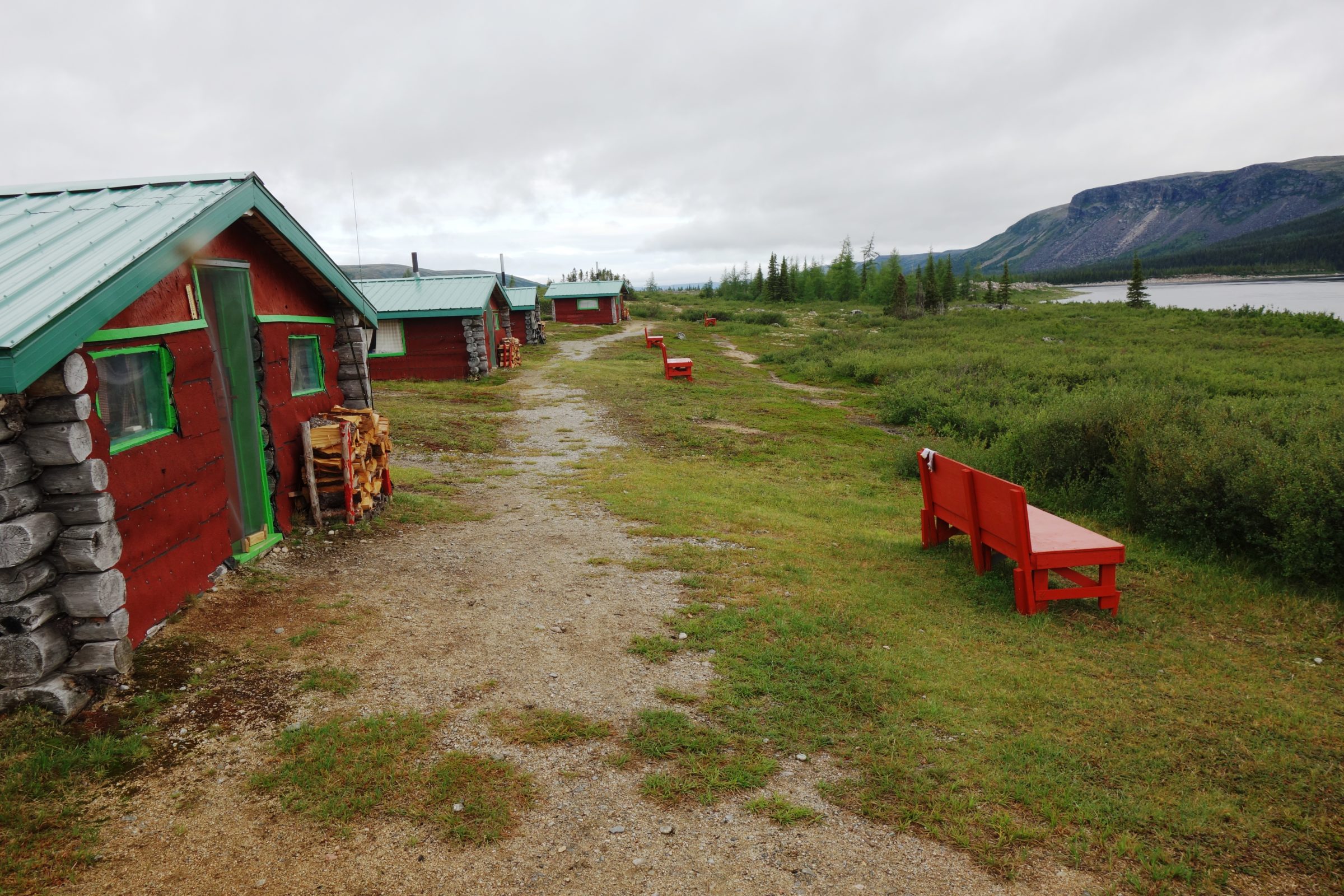 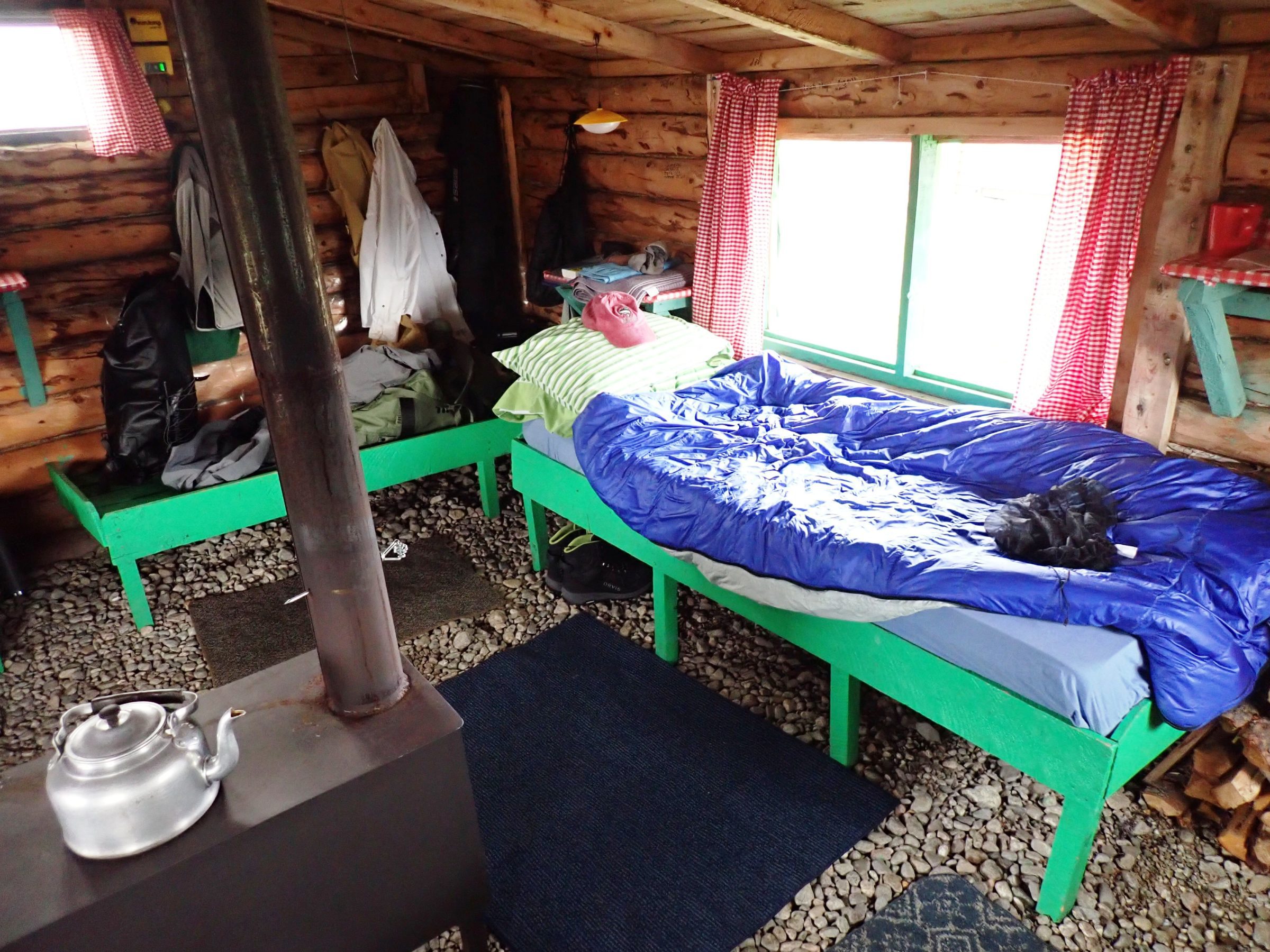 My bed and space in the shared cabin.

Pyramid Mountain Lodge offers an authentic, sub-arctic, wilderness experience.  The buildings were the original camp log cabins built in the 60s with a floor of natural, smooth gravel covered here and there with small carpets.  Each cabin had a small wood stove for heat, and every couple of cabins shared an outdoor toilet facility and shower.  You turned on the solar powered pump and propane for the on-demand heater before you walked in.  It was all very comfortable and set in the most incredibly beautiful surroundings, complete with a huge night sky and protected by a daytime army of mosquitoes and black flies.  The food was good and plenty featuring home-cooking style meat, fish and vegetables.  The camp greatly encourages catch and release, but the occasional male salmon ends up feeding the camp and we had wild salmon a couple of nights plus a tray of cold smoked salmon and brook trout to accompany the cocktail hour.  Wading along the boulder shorelines was very hard work and a solid 8 hours of sleep each night was barely enough to keep me rested for the game. 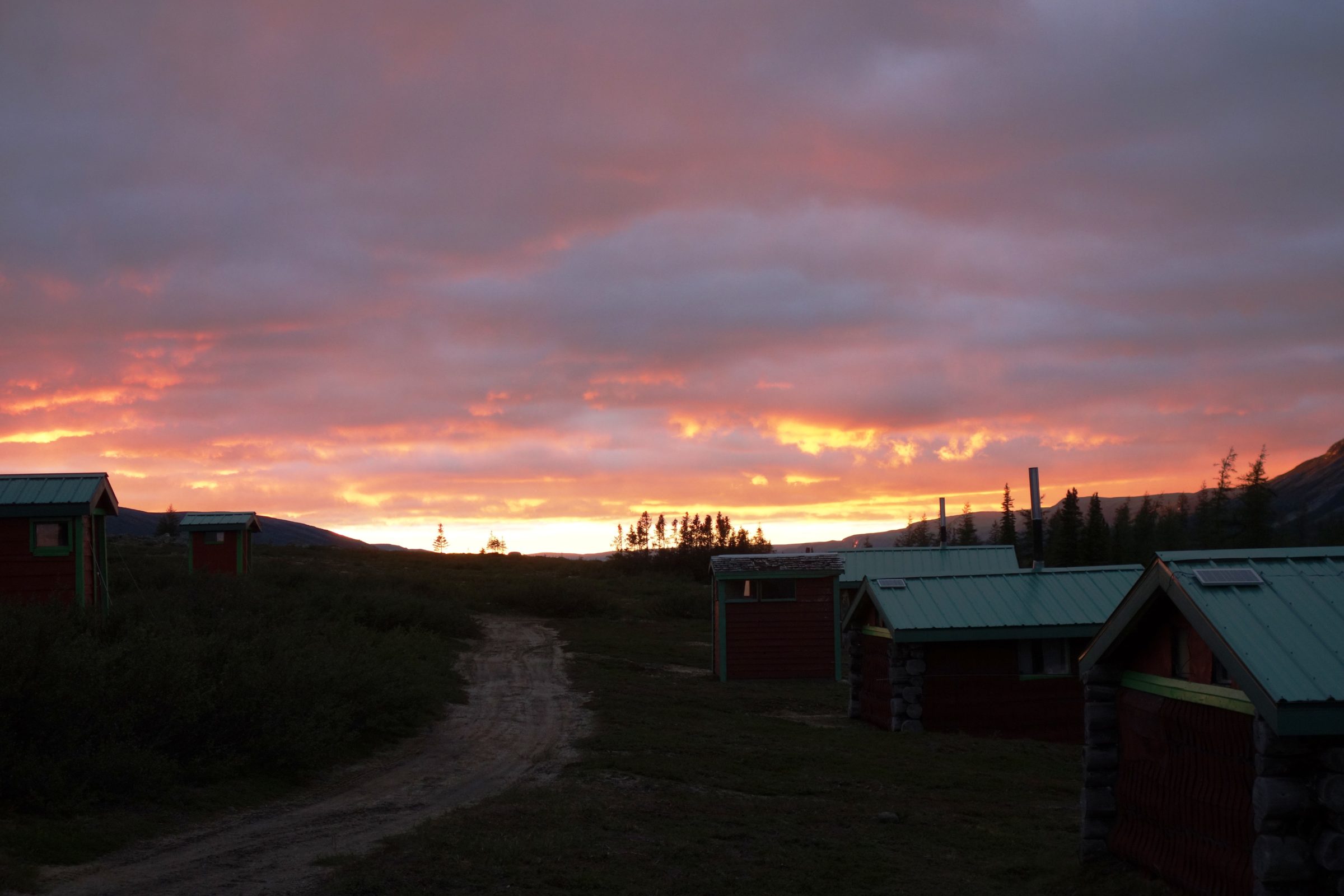 One take away from the George was Peter May’s teaching on the hitched muddlers.  May is a hitch technician, and he watches your fly like a hawk, requesting you to pass it over to him for adjustment of the correct angle and hitch point along the shank if the fly didn’t ride to his satisfaction.  My original Miramichi mentor, Willy Bacso felt that the hitch did not work on the Miramichi.  He wasn’t sure why, but he said he had tried it with very little success.  Conversely May says that dead drifting bombers has only modest success on the George, while skating them is more productive.  There I can attest for certain that a skated bomber is very ineffective on the Miramichi, whereas a dead drifted bomber – short drifts – can be absolutely deadly.  In any case, after watching those big salmon peel off the bottom and race after skated muddlers I’m going to give it a fresh try this fall, and not at a time when nothing else is working. 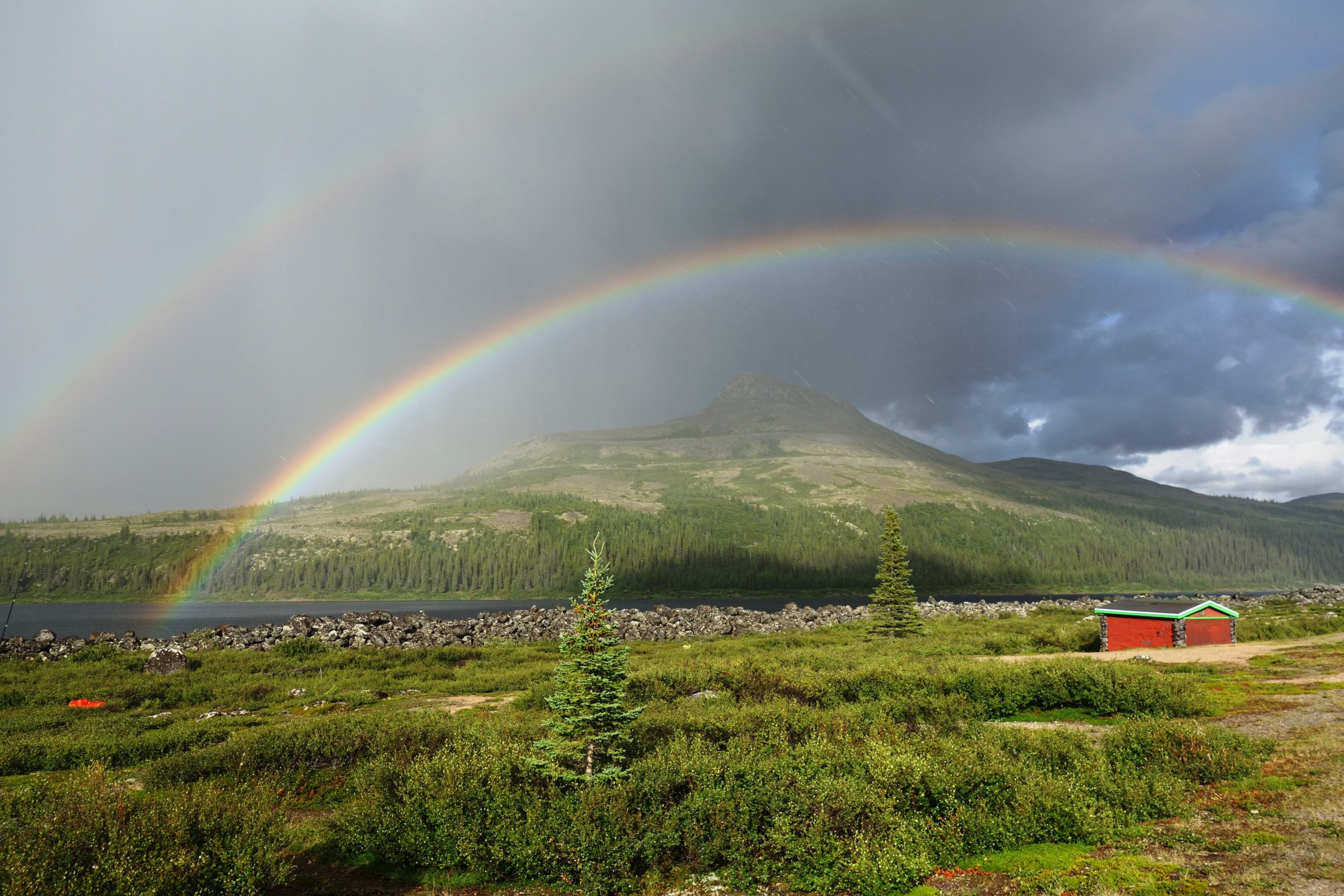 PS  If you enjoy these blogs why not subscribe to notifications by me of new postings at this link.  It takes seconds, and I share the list with no one.

Also, if you haven’t been to my author’s page on Amazon, here is the link.  You have to actually click on the picture of the book, then you’ll see options for additional formats.  Both Maine to Montauk and Black Spruce Stream are now available in hard and soft cover formats as well as kindle. 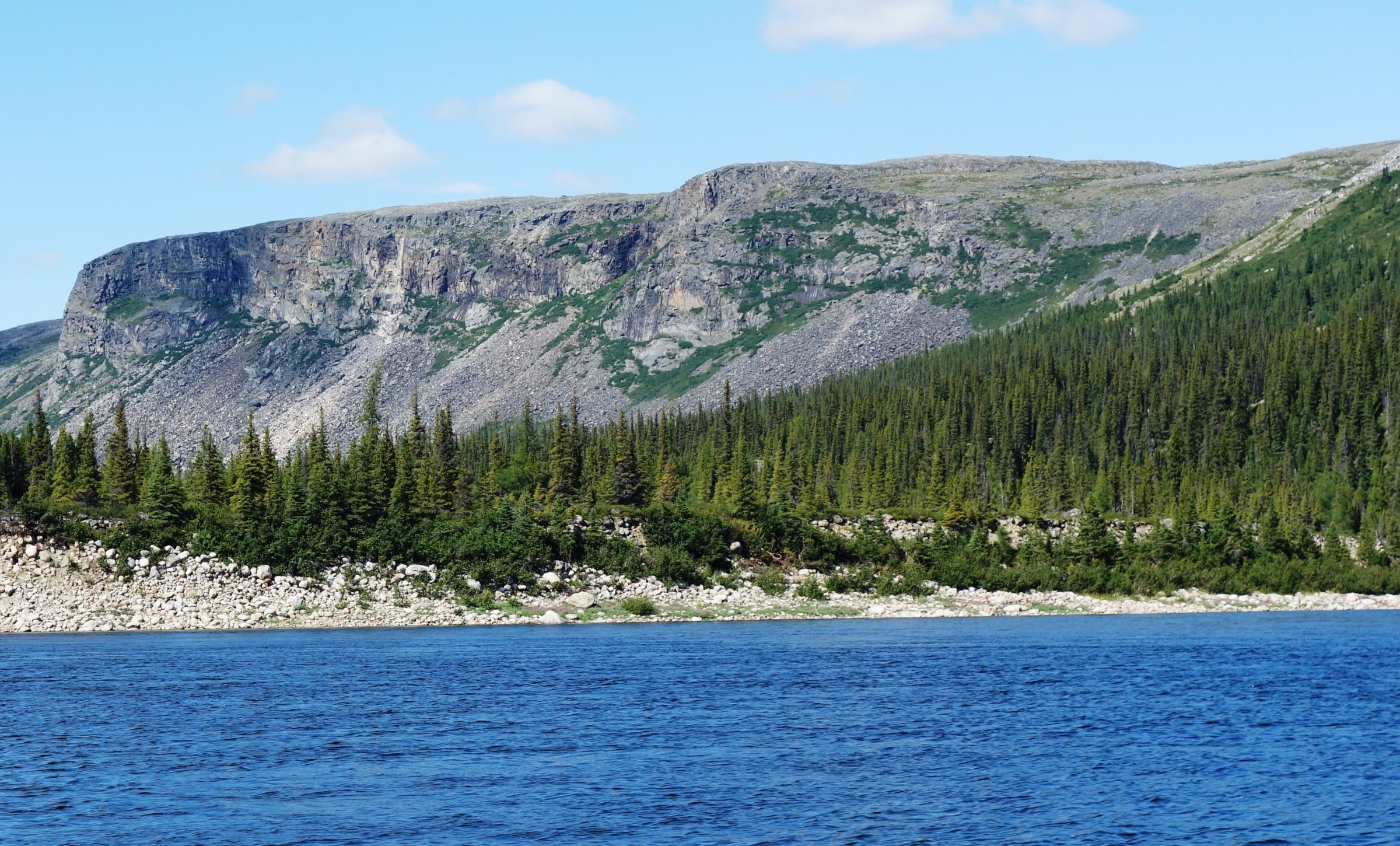 The face of the Old Indian looks down on “the point” where we had some very good salmon fishing.  The face is midway horizontally in the photo and about 65% of the way up from the bottom.

← Autumn Fishing In Our Sights
Miramichi Salmon Blog:  Fall is Right On Time! →