I just returned from a week on the Miramichi and Cains Rivers.  This was again a week that like others this year has gone from good conditions – and good fishing – to dry, sunny heat and very poor fishing.  The general trend of the summer has been warm and dry, but there is a good run of fish and whenever we get a break things are good.

On Friday 9/11 I made the 408 mile drive from Falmouth, Maine to Blackville, NB in a steady rain.  It was clear that we would get a good raise, but exactly where and how much is difficult to tell until it is all over.  In the end the Cains received nearly 3 inches of rain while the Miramichi headwaters got just over an inch.  The Cains is a much smaller river, and it responds much more quickly to rain than does the Miramichi.  On the other hand the watershed is also much smaller and the raises don’t last as long.  The Miramichi upstream of the Cains entry in Blackville is completely unaffected by rain over the Cains.   The result was that on Saturday morning we took the jet canoe from Campbell’s 2 miles upriver to the Cains and found an unusual sight.  The Cains was pouring out into the Miramichi black as India ink, and with such force that the current seam was pushing the normally stronger flowing Miramichi aside well beyond the middle of the river.  We ran the boat a couple of miles up into the Cains and found it entirely unfishable with very high, dirty water and debris.  Saturday was pretty much a washout in our area.

On Saturday evening my guests Stephan and Audrey Prucnal arrived.  Stephan goes back to years of fishing at Wade’s when Herb Wade was still running the show. The Prucnals planned three days on the Miramichi then were off to close their salmon year on the Matapedia’s Glen Emma water.  Sunday morning arrived cool and showery, but with the big river clear and already dropping – characteristic of a Cains River raise.  Miramichi headwater’s raises can take two days to fully develop in Blackville.  Jason Curtis took the Prucnals into the Cains and I fished the main river from the canoe.  After anchoring up at the top of Campbell’s Pool I began to see fish moving up that shoreline as they often do in high water.  There were some coming through the Keenan side too, but the great majority came along the Campbell’s side.  I was fishing for moving fish that I hoped would pause here or there in the rocky shallows along the shore.

After about 15 minutes a big bow waver appeared behind my #2 October killer streamer fly and I was on to my first salmon.  Almost as soon as on, though, it was off.  These things just happen, and frankly I can’t see a big difference between solid hookups on the barbless or the regular hooks that are now required.  For the next couple of hours there was fairly steady action with a fair number of fish rolling at the fly but not connecting while others hit very aggressively the first time.  Some that rolled had simply moved on when you cast back, but others rested near an attractive rock and chased the fly several times before finally taking it or getting as Jason calls it “rolled out” and unresponsive.  The water was generally 4 to 5 feet deep and as dark as night.  The Cains headwaters are full of bogs and peaty bogans, and that river is virtually always dark.  You have to wonder how the fish ever find that fly, but it seems to be no problem for them.  In the end I had two grilse and a big hen of about 17 pounds.  The Prucnals also did well with three grilse and a nice salmon for Audrey.  You couldn’t get out of the boat where Jason was fishing, and their salmon were netted from the canoe pulled up against the shore.  The water was about 5 feet deep there where we normally wade, and these fish were being hooked in 7 or 8 feet of water, unusually deep water by my experience to catch Miramichi or Cains salmon in.  Jason is good with the net, and you needed to be in those conditions.  On their way up the river and again coming back down, anglers at most of the camps they passed had fish on.

On Monday it rained again, but hardly any fell this time along the Cains, the Miramichi headwaters got most of it.  By Monday morning the main river was already down a lot as the big Cains raise flushed through, but by Tuesday it was up a bit, and stayed steady into Wed.  The Cains dropped every day.  By Saturday when I left both rivers were back down to normal fishing heights but warm from several days of unusually hot, dry weather.  There were still a few fish moving early and late in the day, but getting a strike from one was next to impossible.

We had good fishing each day on Monday and Tuesday- the Prucnals left after lunch for Matapedia –  and the three of us ended with 16 fish.  This was good salmon fishing, though certainly not red hot.  Jason observed that most fish looked to have been holding in the river for some time, and we never saw the sea lice we expect to see on some fresh, fall-run fish.  Those fish are yet to come!

I’ve got to tell you one fishing story that I plan to hold on to for a long time.  On Wed. morning I got a grilse at Campbell’s and after finishing the pass we moved over to the Keenan side.  About half way down through the pool I had a powerful strike from what turned out to be a cockfish of about 18 pounds – there were a couple of these for the trip as Jason Curtis also caught one of about 15 pounds across from his house on his lunch break!  Jason said his fish never got beyond the fly line, mine, though, was one of the most memorable fighters of my salmon fishing career.  Early season fish are characterized by their high speed runs while the fall fish usually don’t have that kind of zip, good fighters as fish go, yes, but not the equal of June salmon.  This cockfish was a stellar exception.  Shortly after this fish was hooked the line could be heard and seen zipping through the water running upstream and away from me.  I was immediately into my backing, and soon the fish leapt from the water 50 feet upstream of the boat and a good 150 feet away across the river.  Next the fish ran completely across the river where my downstream neighbor was fishing on his point of land.  The fish blew off a hundred yards of backing against the tight drag of my Hardy Cascapedia, then jumped a couple of feet clear of the water landing with a huge splash about 30 feet from the startled fisherman.

We ended up going ashore on the Keenan bar and following the fish downstream.  As they often do the fish returned to roughly where it had been hooked, before again running off at least another 100 yards of backing while we stumbled down the bar in knee deep water.  I had seen this fish and knew it was no 40 pounder, but that cockfish really had heart.  Darrell Warren netted the beast, and upon being released it simply shot off into the river.  Darrell, a man who in his youth could pinch steel bottle caps between his thumb and finger, said he could feel the strong muscles in the fish as he held it.  If salmon like that grew to 50 pounds regular salmon-sized fly equipment could never hold them!   The picture is not all that remarkable, and Darrell is a big man who doesn’t hold fish out at arm’s length, but I assure you that fish was quite a specimen. 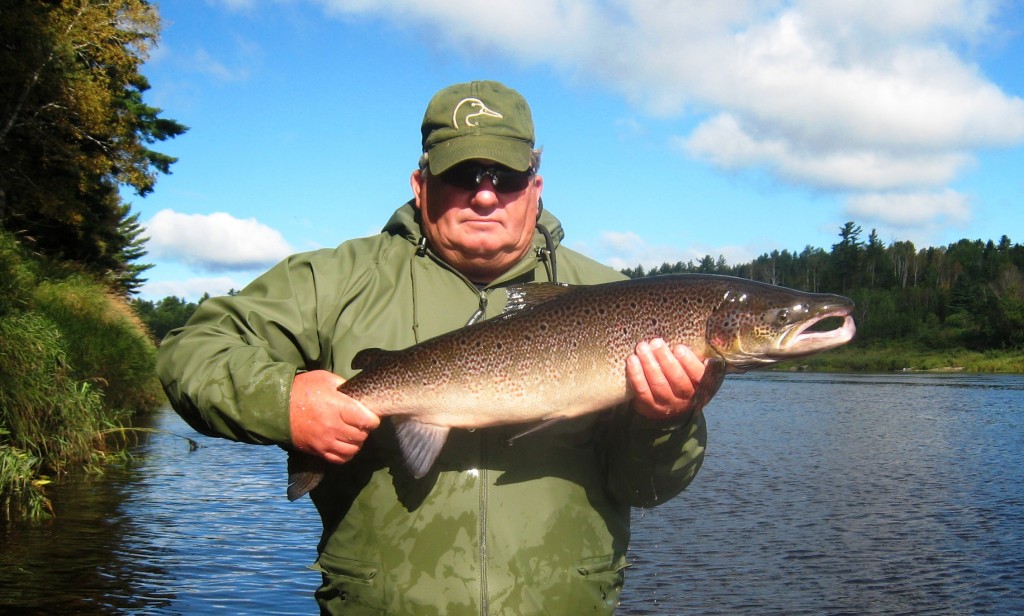 Darrell Warren with the champ

I checked this morning and the Millerton and Cassillis trap numbers for 9/15 are posted.  They continue to be strong.  Millerton salmon are 481 which is about the average from 1997 through 2011.  Cassillis has 310 which exceeds anything from modern times.  The grilse numbers are 1220 and 1325 respectively.  There are fine numbers, and in the case of the Cassillis numbers from the NW Miramichi they are simply spectacular.  Everyone over there has to be smiling.  Again, these traps only catch a certain and annually varying percentage of the run.  Their value is in comparison to other years.  Both branches of the river have grilse catches equal to or exceeding the last three years combined.  The Main SW Miramichi and the Cains are known for their fall run that takes place from about now to the end of the season.  The final statistics will be very interesting.

The prognosis for the rest of the season has to be very good.  We have had only this one real raise so far this fall.  This means that our run has not been stolen by constant premature high water.  There is much cooler weather forecast by later in the week along with some showery, cloudy weather.  Under these conditions fish will stack up in the lower river and trickle up through.  This is the optimum fall fishing scenario for the main river.  We could use a little more water than that on the Cains, but I’m of the opinion that any forecast beyond four or five days is hardly worth reading as far as rain goes.  I am entirely confident, though, that much excellent fishing is yet to come, and you should get your butt up to the Miramichi if you can.  Oxbow Outfitters, Country Haven, The Ledges, Wilson’s, Bullocks and others I hope I don’t offend by forgetting to mention can often find room for even last minute planners.  Once the season is gone there is no bringing it back.  Don’t miss out.

Give me a holler at bigbass@maine.rr.com if you have any questions or I can help in any way.  If you can’t make it this year buying a copy of Closing the Season through my website bradburnsfishing.com is the next best thing…

Here a few more pics from the trip – note, double-click on pictures to view in larger size: 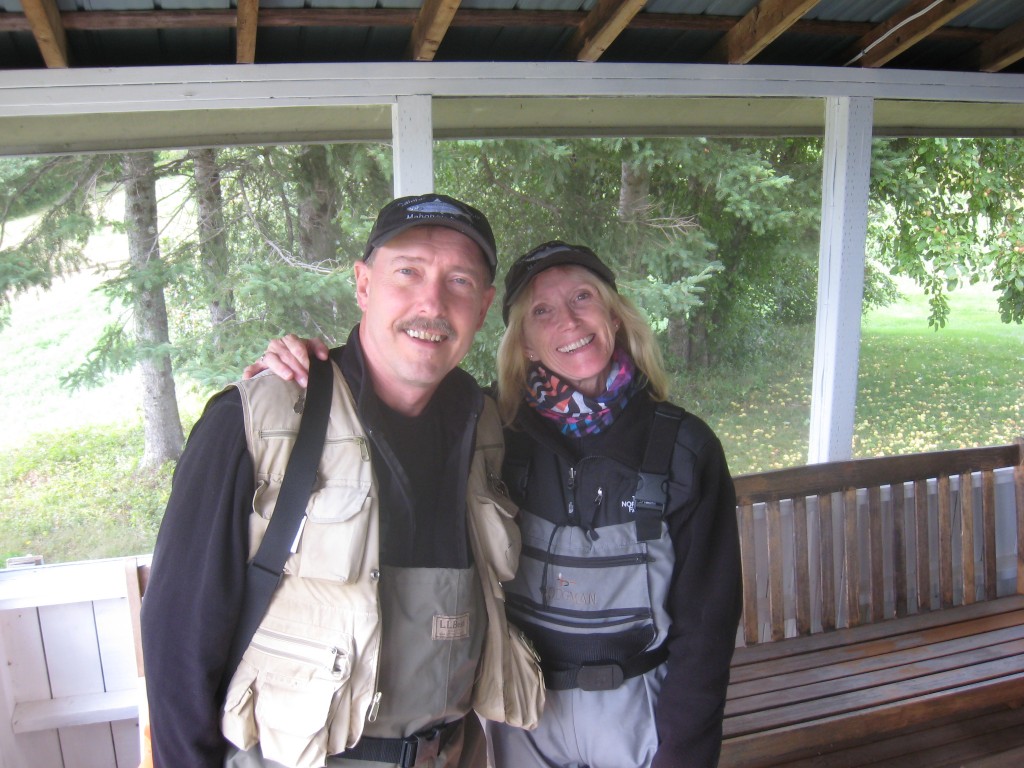 Stephan And Audrey Prucnal at Campbell’s 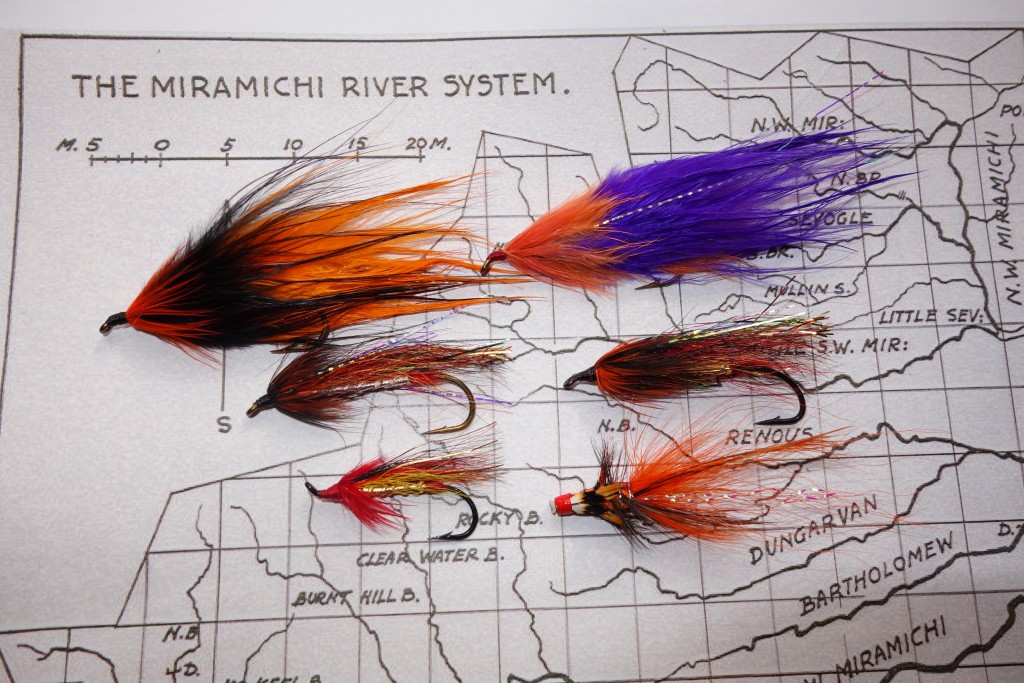 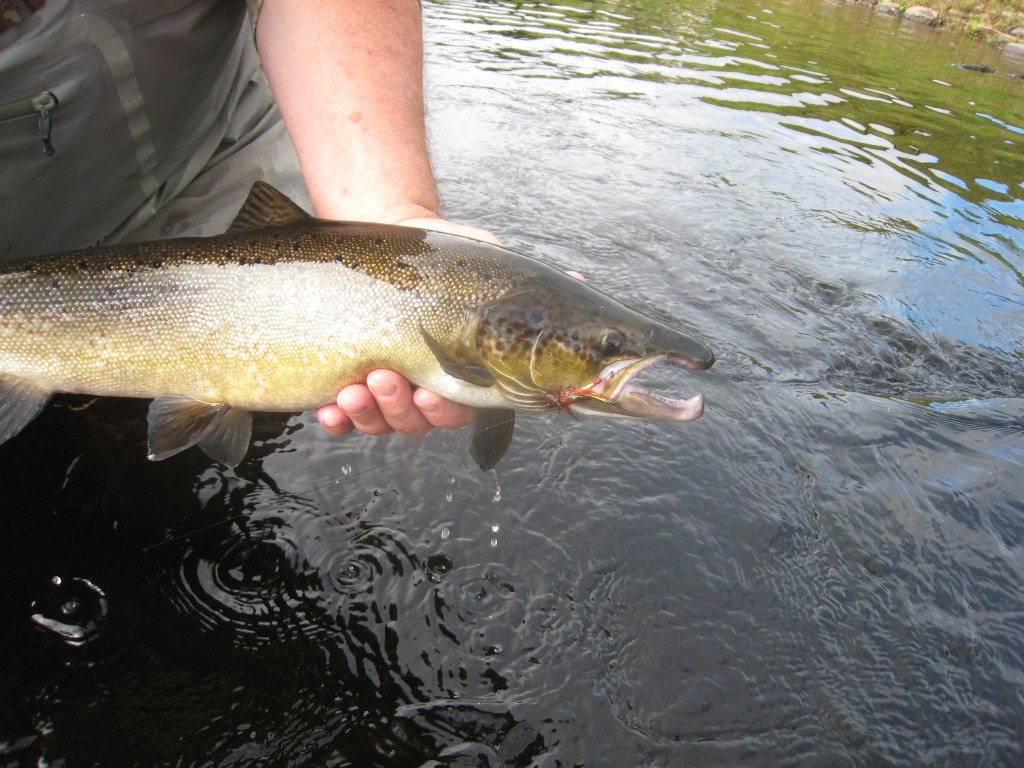 Headed for Cains in jet canoe 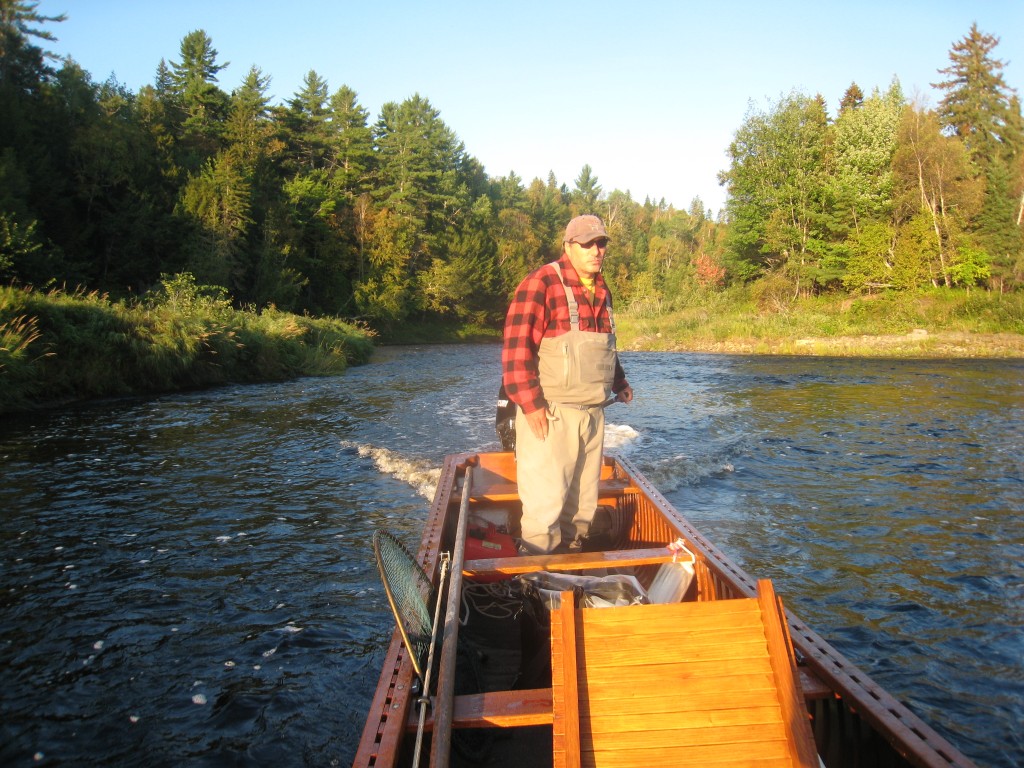 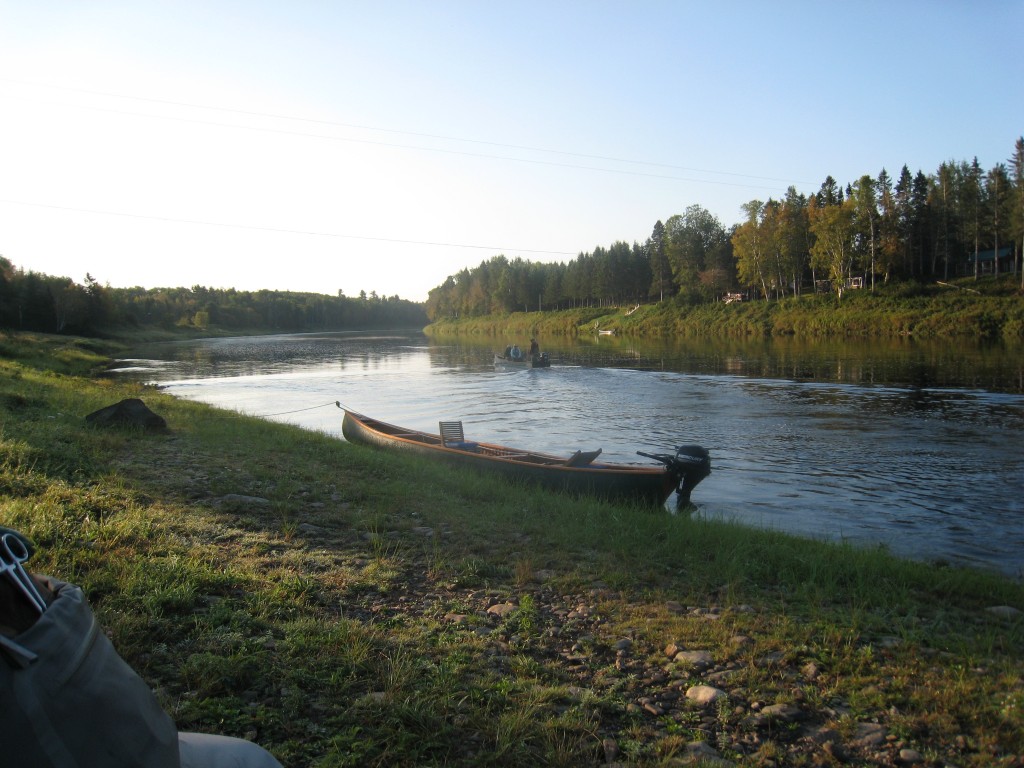 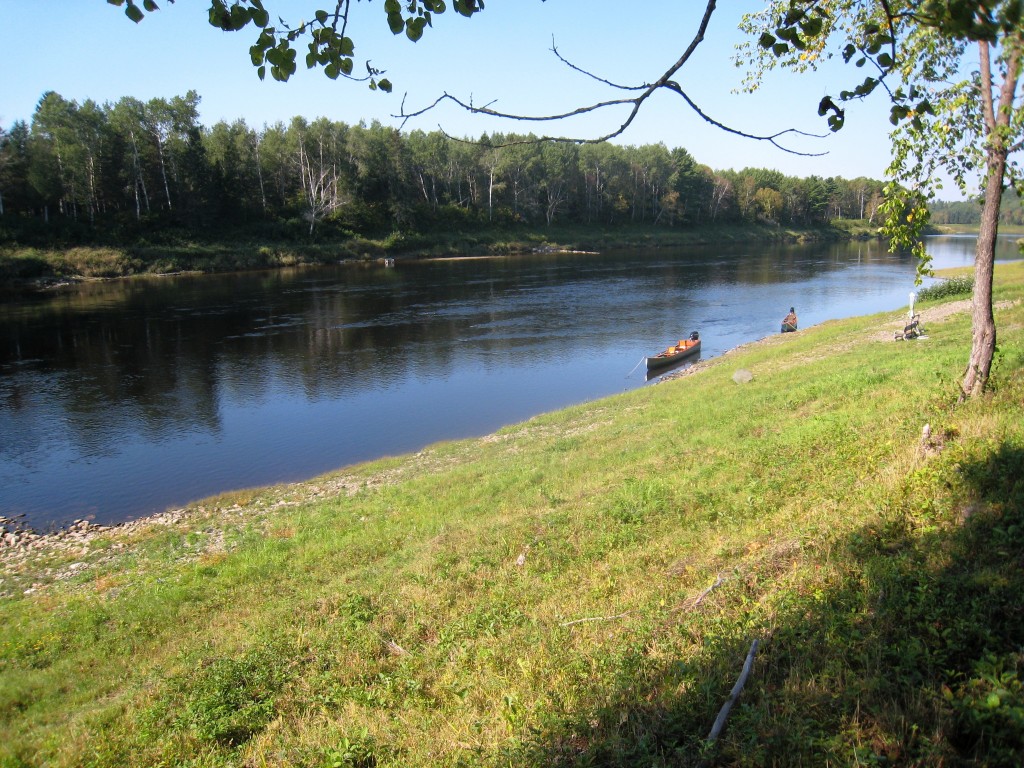 Campbell’s and Keenan’s (far side) 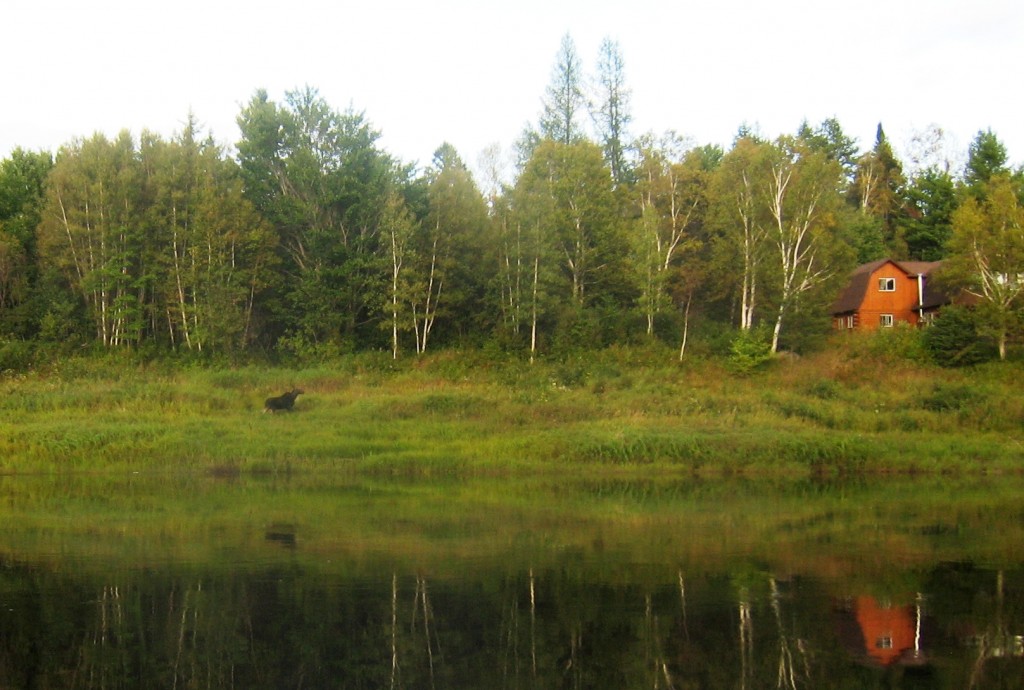