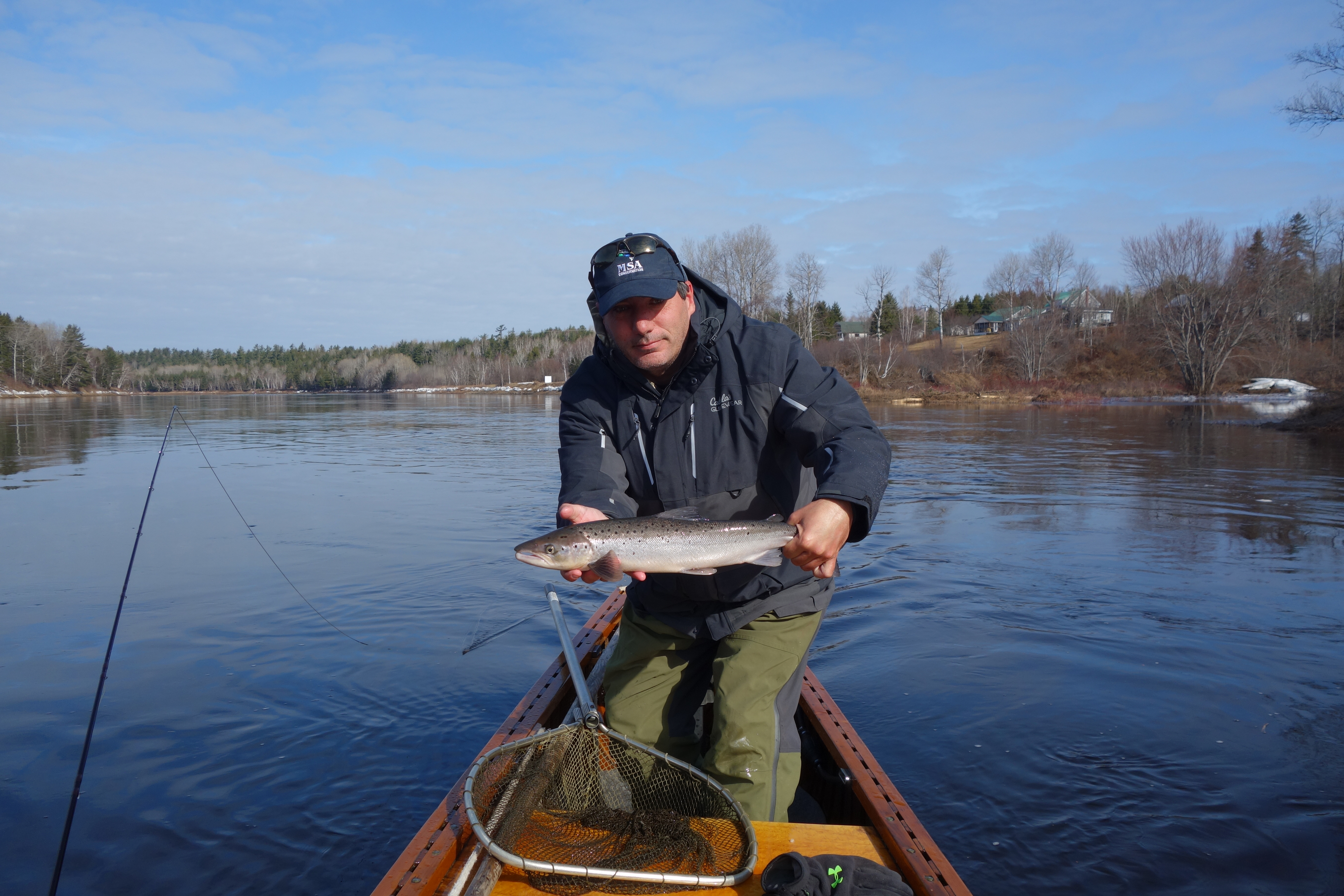 A wee grilse that made it through in fine condition.

I came back Friday from three days on the Miramichi and Cains Rivers fishing for spring salmon.  I always love this experience, even though….and this year the even-thoughs constitute a fair list.  Even though the highest temperature for the period was 43F during rain on the last day of fishing, even though it snowed two out of three days – it rained the other, even though it was well below freezing every night and Tuesday night it was only 23F, and even though fishing started off slower than expected. 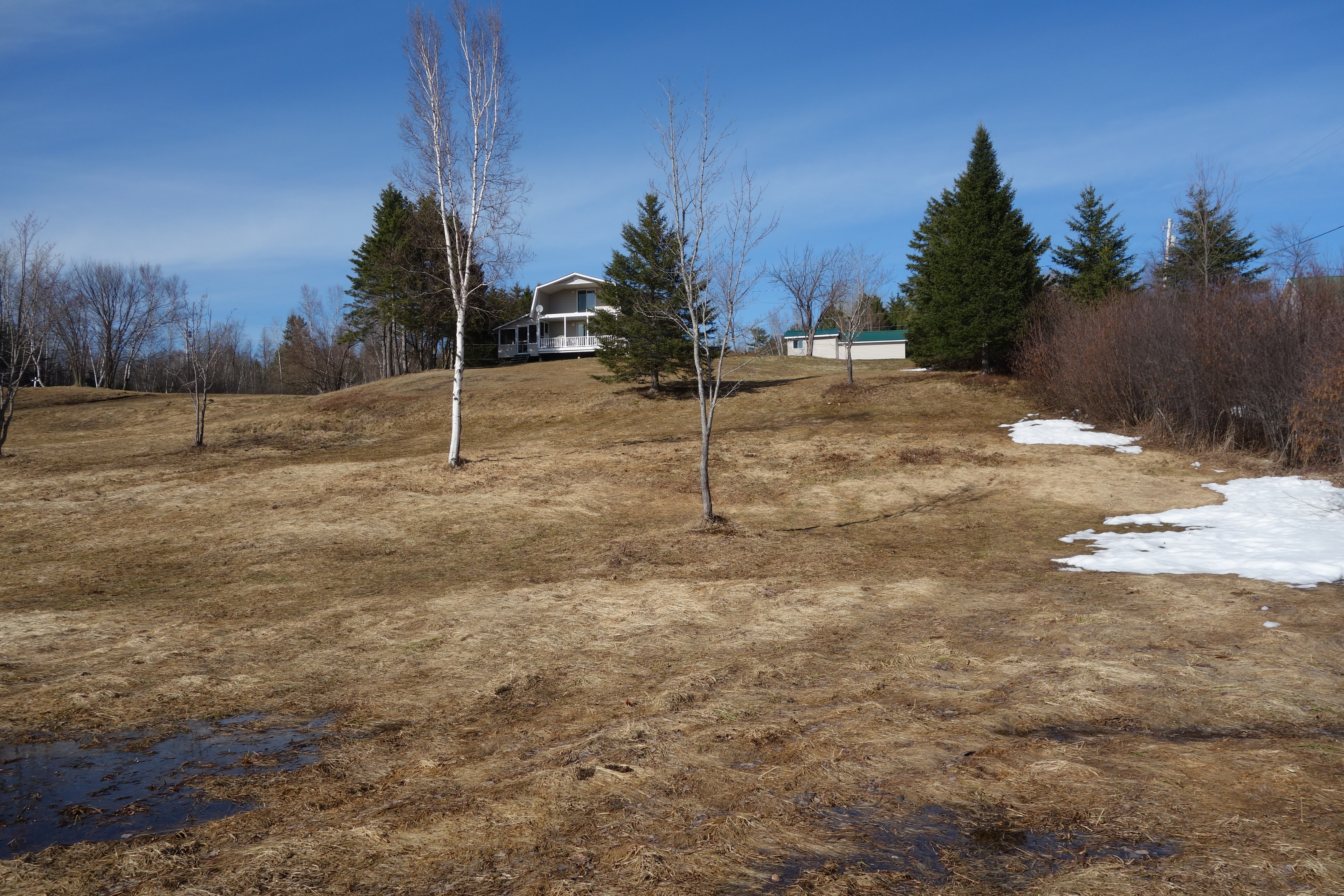 So what made up for it all?  I found the camp at Campbell’s Pool in great condition, and the old fields and woods were a sight for sore eyes.  We were constantly entertained by the local herd of deer that were out feeding 24-7 on the new grass shoots, the pair of black ducks foraging in the guzzle leading out of the pond in the back yard, and many returning birds including eagles, osprey, kingfishers, robins, black birds, and Canada geese.

For the last 25 years or so, with the exception of two or three seasons circa 2007, I have made at least one annual spring salmon trip – either to the Matapedia/Restigouche or the Miramichi.  As with all salmon fishing, predictions about next season’s success are useless, and even tomorrow’s forecast is of relatively little value.  None-the-less, in recent years the earlier you can get fishing after the season opens the better your chances generally are.  In some of the warmer springs the only decent action has taken place in the first couple of weeks of the season.

This year, though, has been a really old-fashioned year in that despite the ice-out being more or less on time the recent daily average temperatures have been well below average.  We did not take the water temperature, but I would put it at very little above freezing.  On Monday before we arrived it rained and snowed all day and this gave us a high, dirty river on Tuesday.  On Wednesday morning the outside temps dropped to 23F, and it snowed off and on from midnight throughout the day, there was ice wherever the water moved slowly, and we had ice in the rod guides all day long.    The unusual cold each night, though, reduced the runoff, and the river dropped and cleared up some each day of the trip. 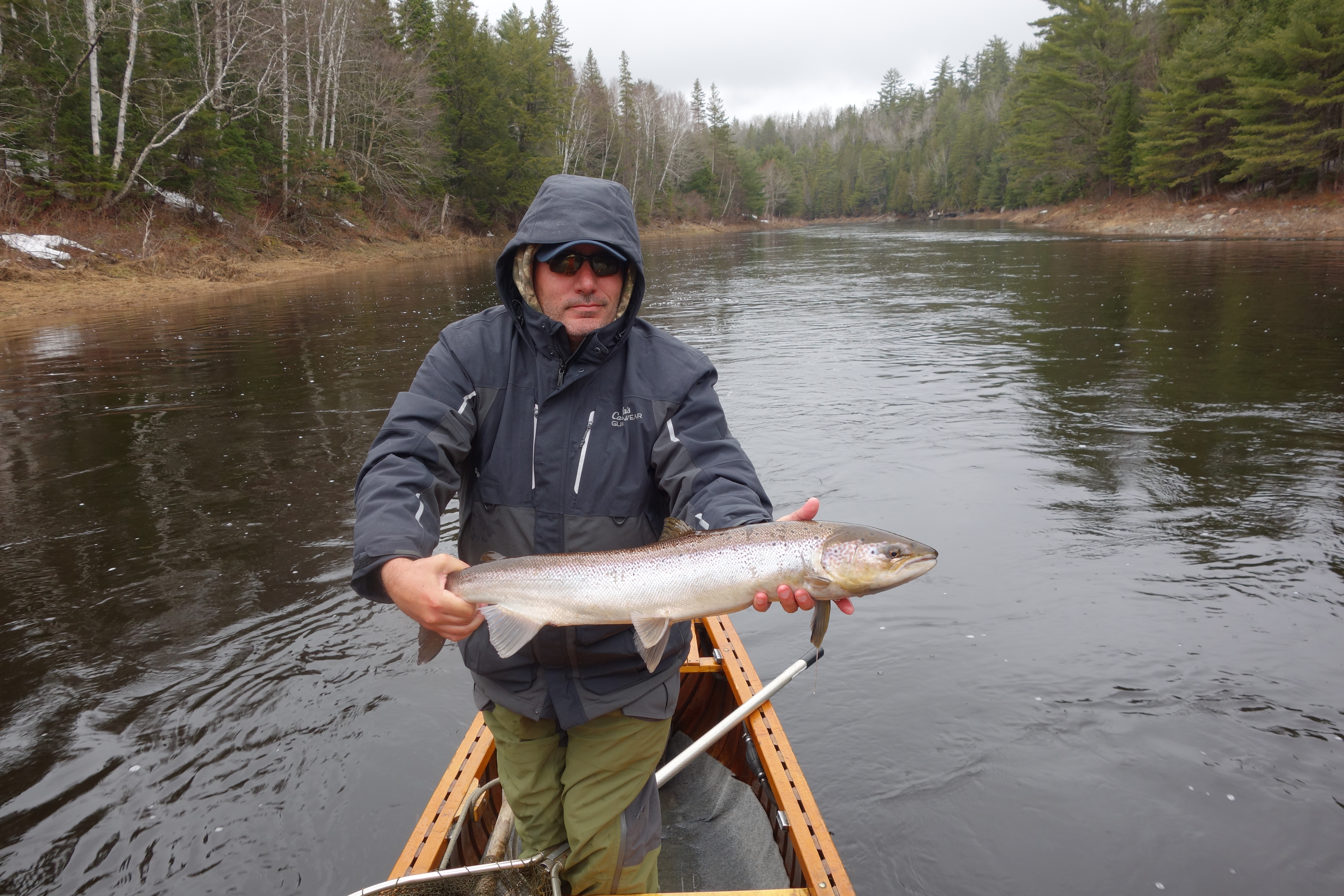 Despite the consistently cold conditions we managed some reasonable catches.  Spring salmon fishing is more about sniffing the breeze than it is hauling in fish after fish, but fishing without that occasional tug is just casting, and it is important to have some success.  We didn’t start until around 9:30 to 10:00, taking pity on the guides as well as ourselves.  We took a liberal two hours for lunch, and after starting again at 2:00 we stopped casting in time to be back at camp by 5:00 PM – anticipating an extended cocktail hour.  Still, on this light schedule we managed a half dozen fish apiece each day, and I had 7 on the last day.    I know that people have caught many more than that in a day’s fishing for kelts – and so have I – but we got to see enough salmon to keep us quite content.

Almost all the fish we caught were at the end of the swing with a 450 grain head, and after waiting a long pause before that first strip.  I have no doubt that with some warming conditions the fish will be more active and accommodative.  We did notice an almost even mix of salmon and grilse, and that is reflective of last year’s run of bright fish.

Here are a few photos from the trip, hope you enjoy.

Jason Curtis at the helm 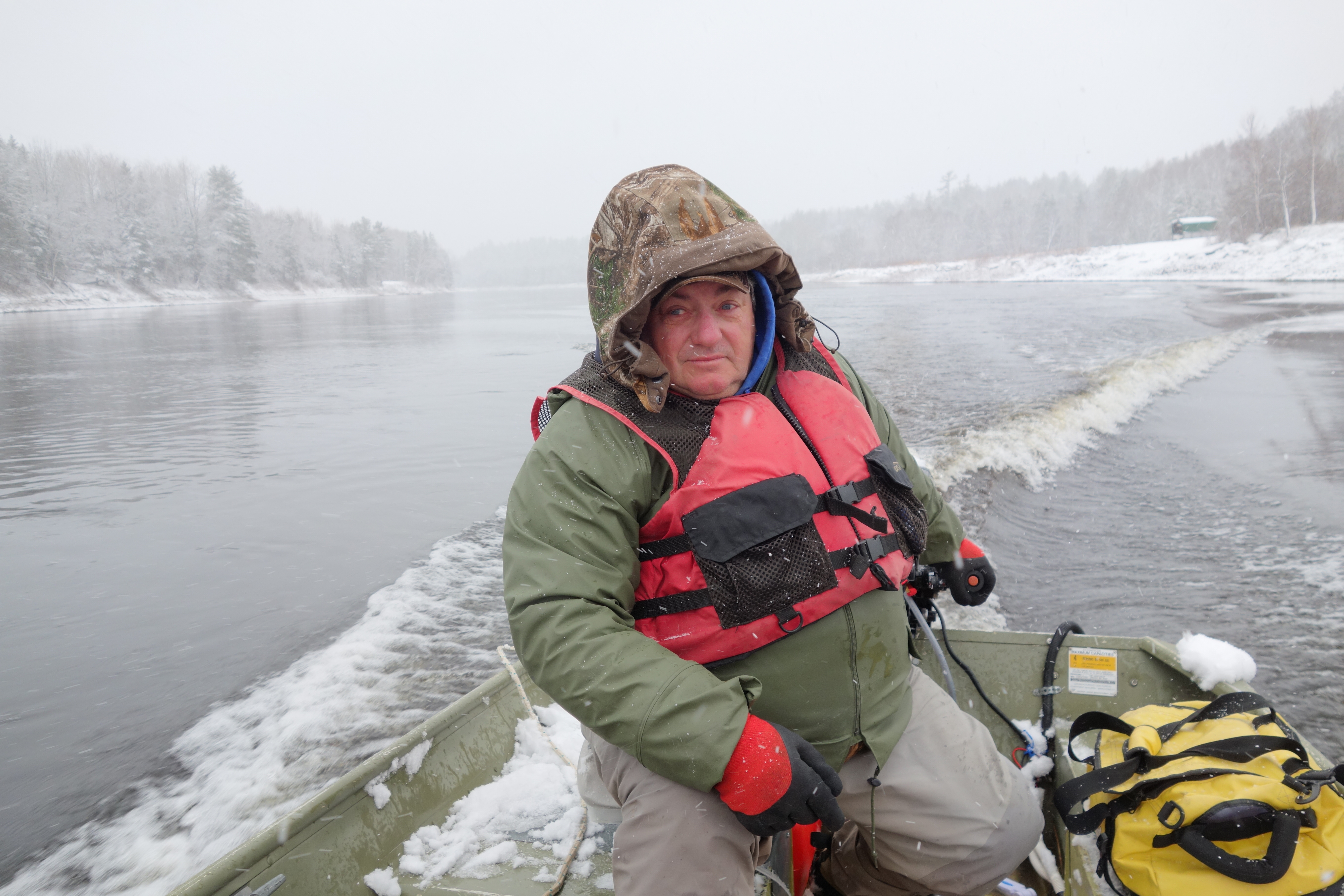 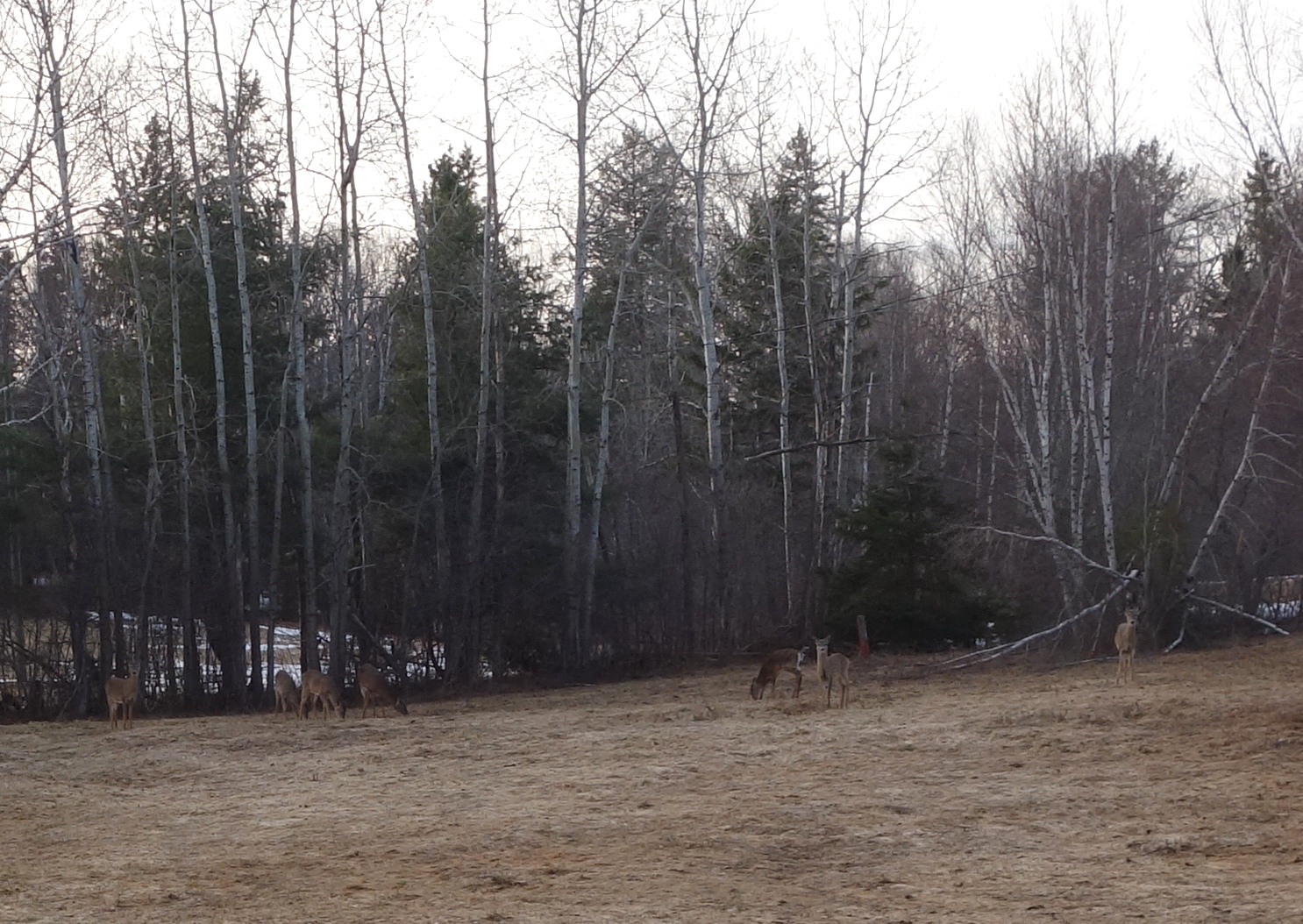 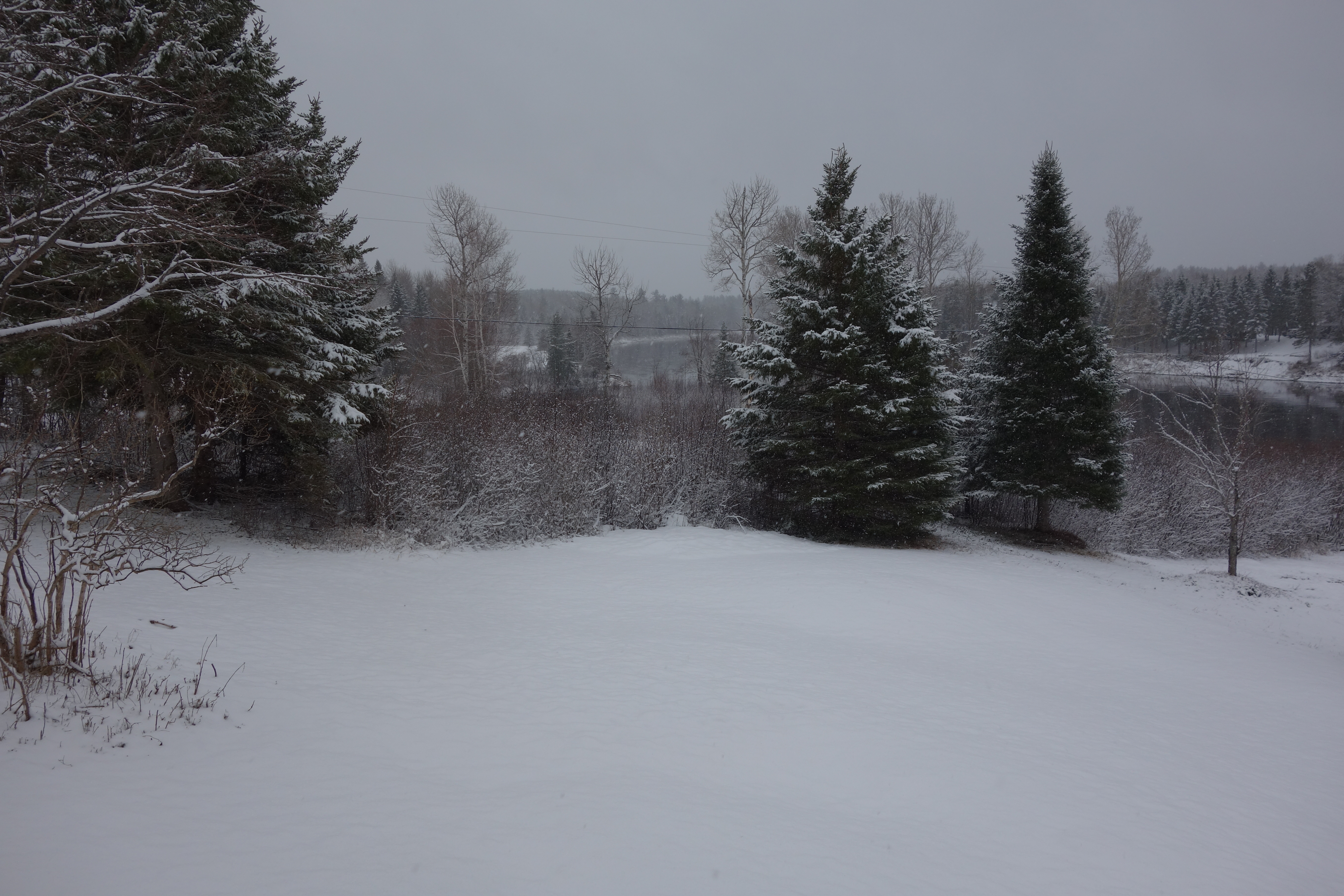 A decent snowfall for late April 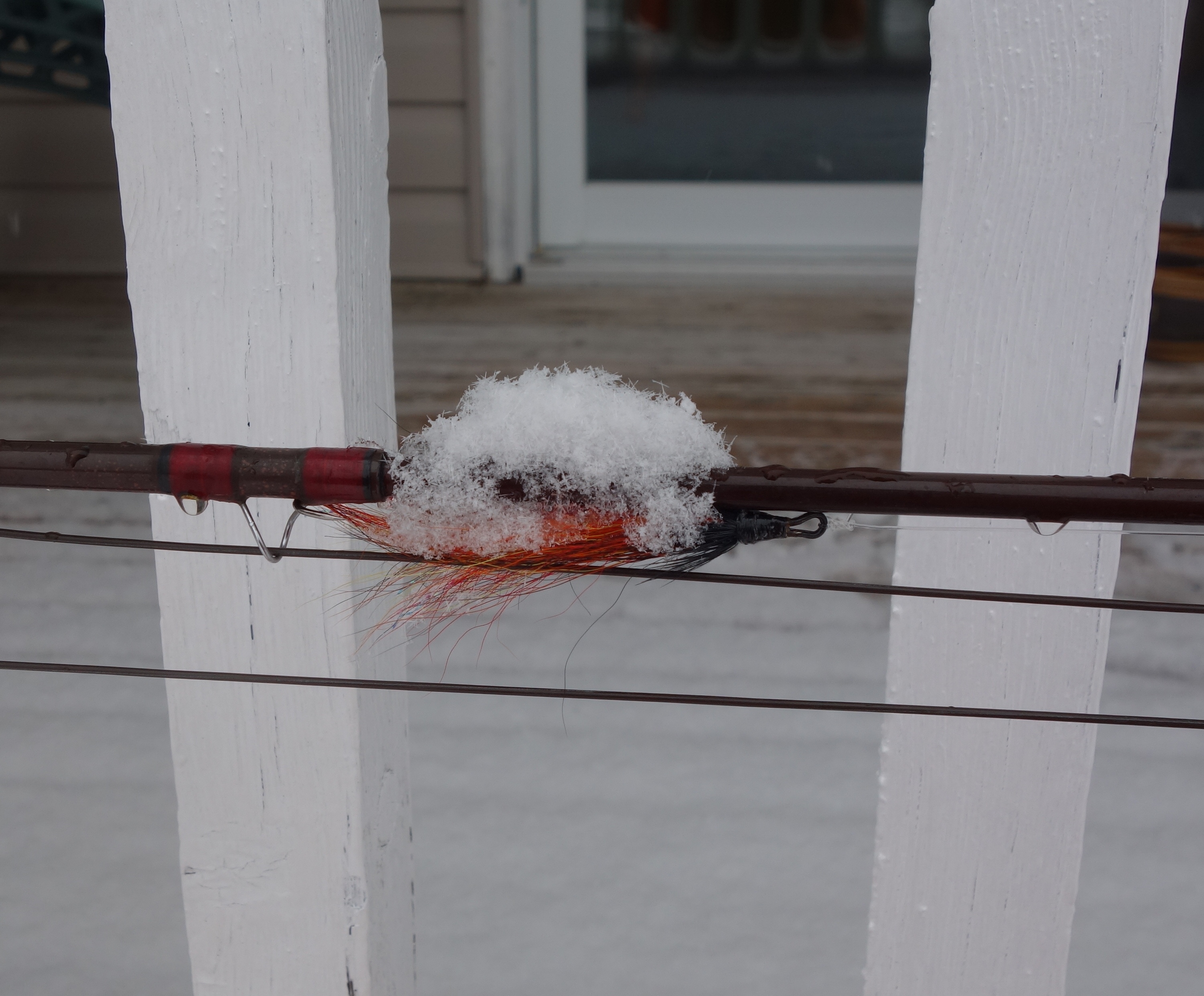 There’s a Willie Gunn Waddington under that snow 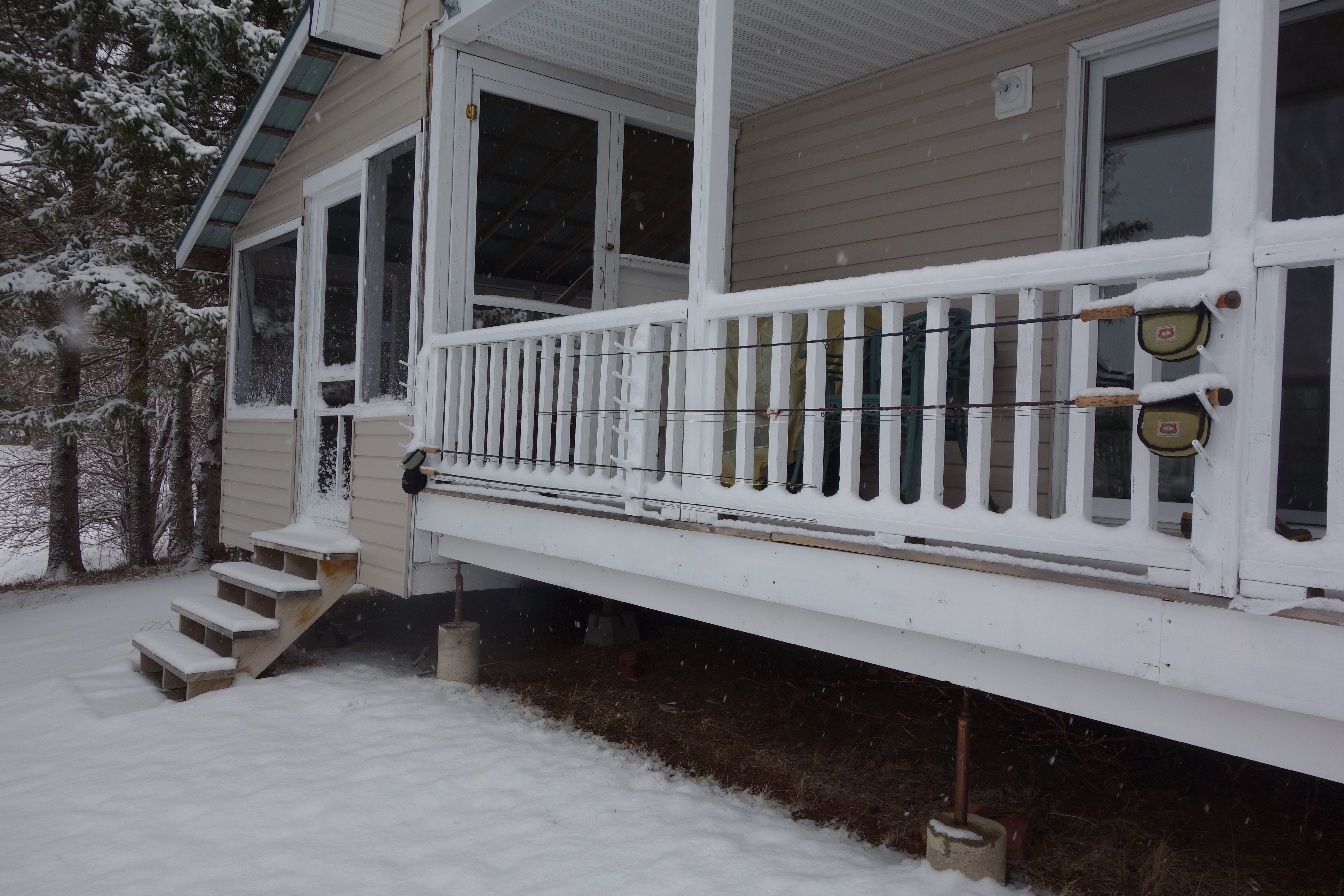 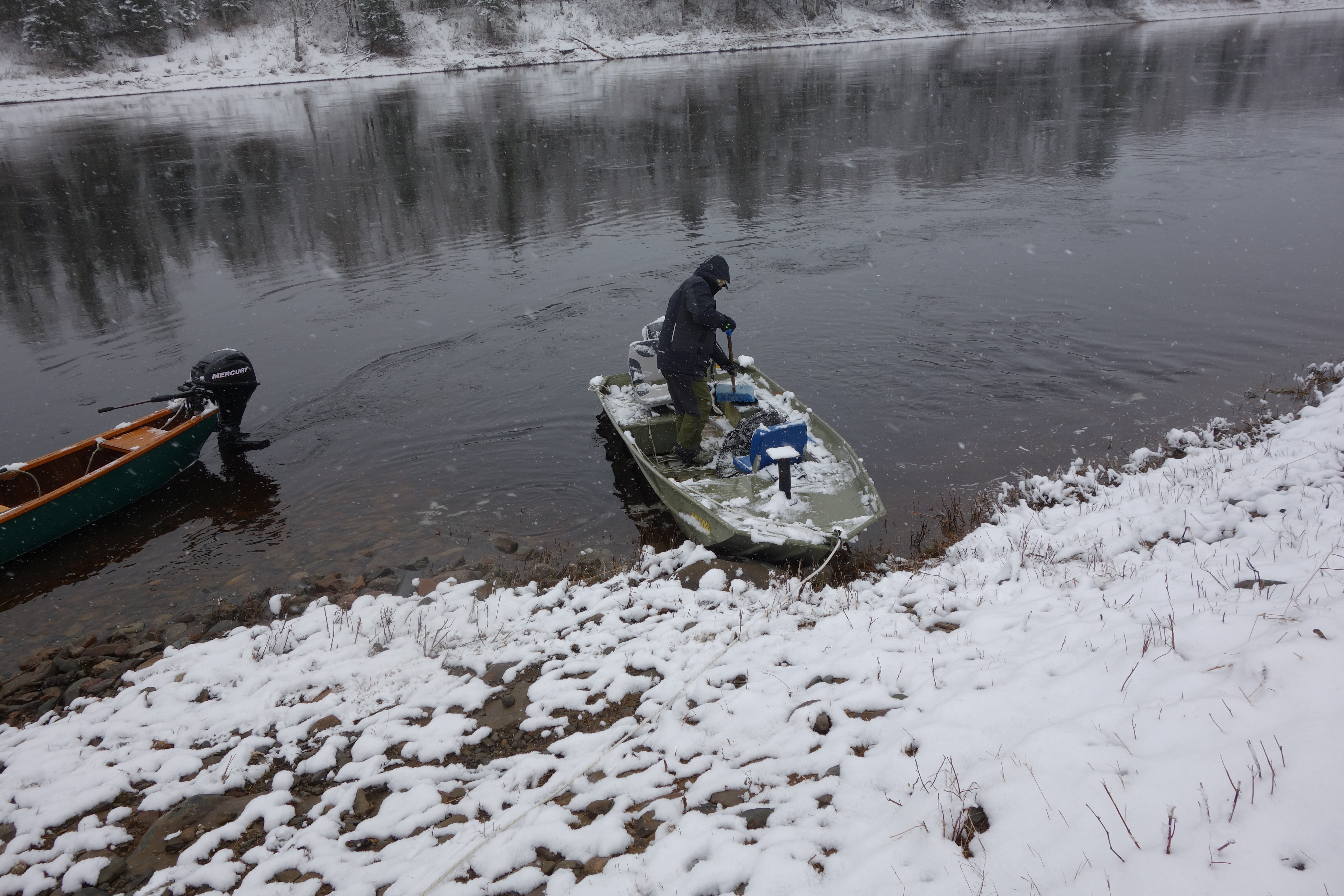 Shoveling out the boat before fishing 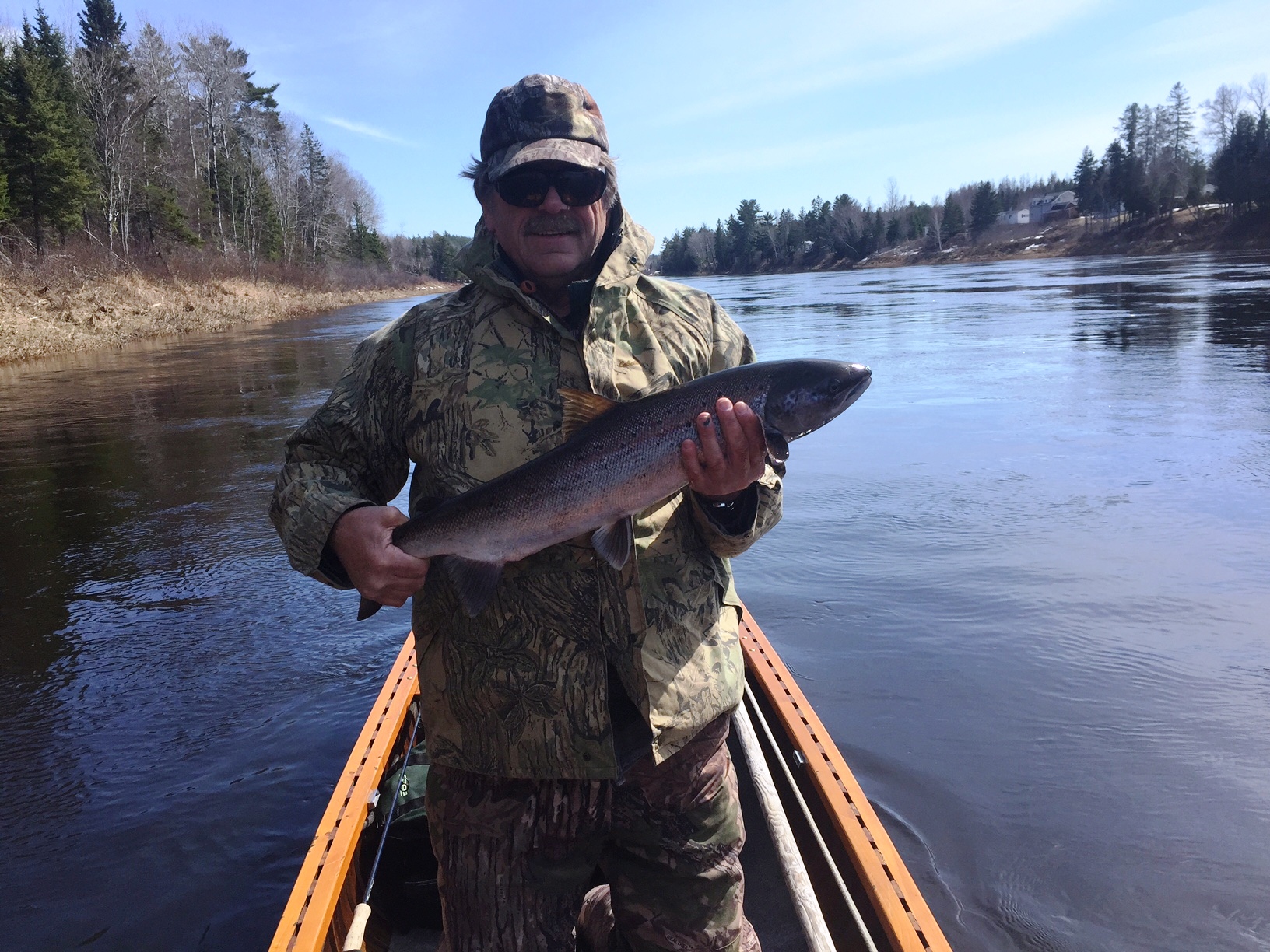 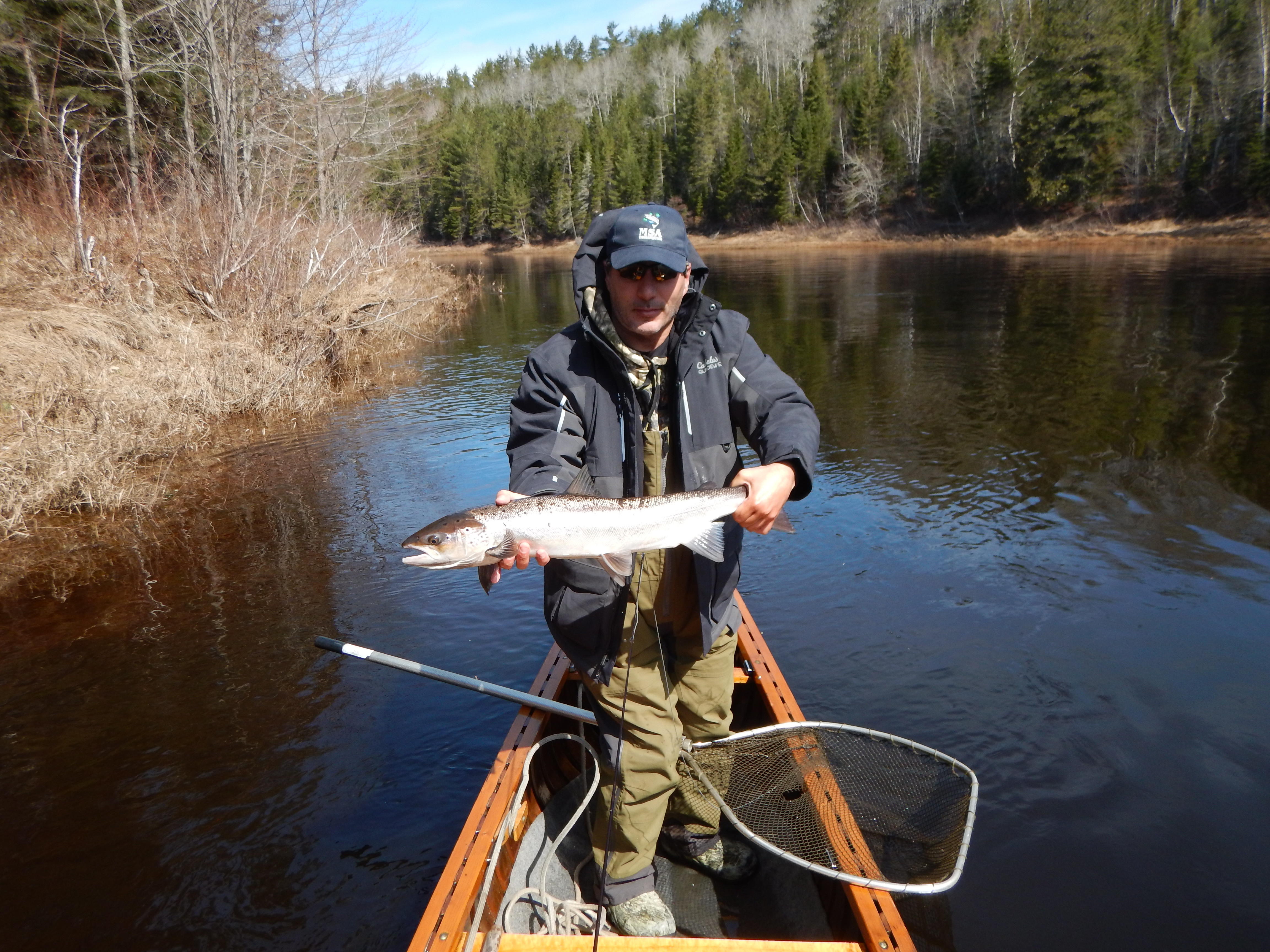 A Cains River salmon during a rare moment of sunshine 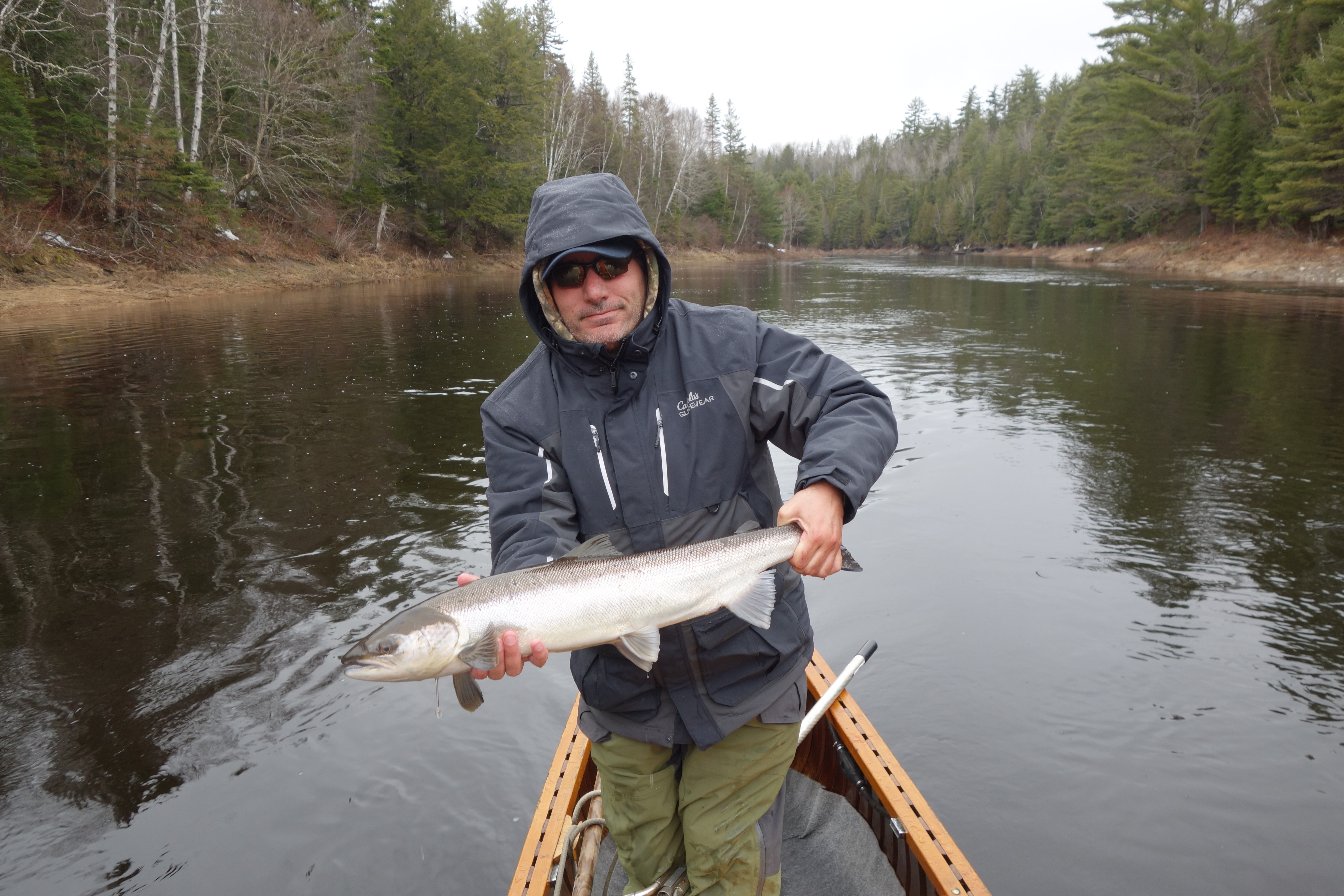 A handsome spring fish from our last day honey hole 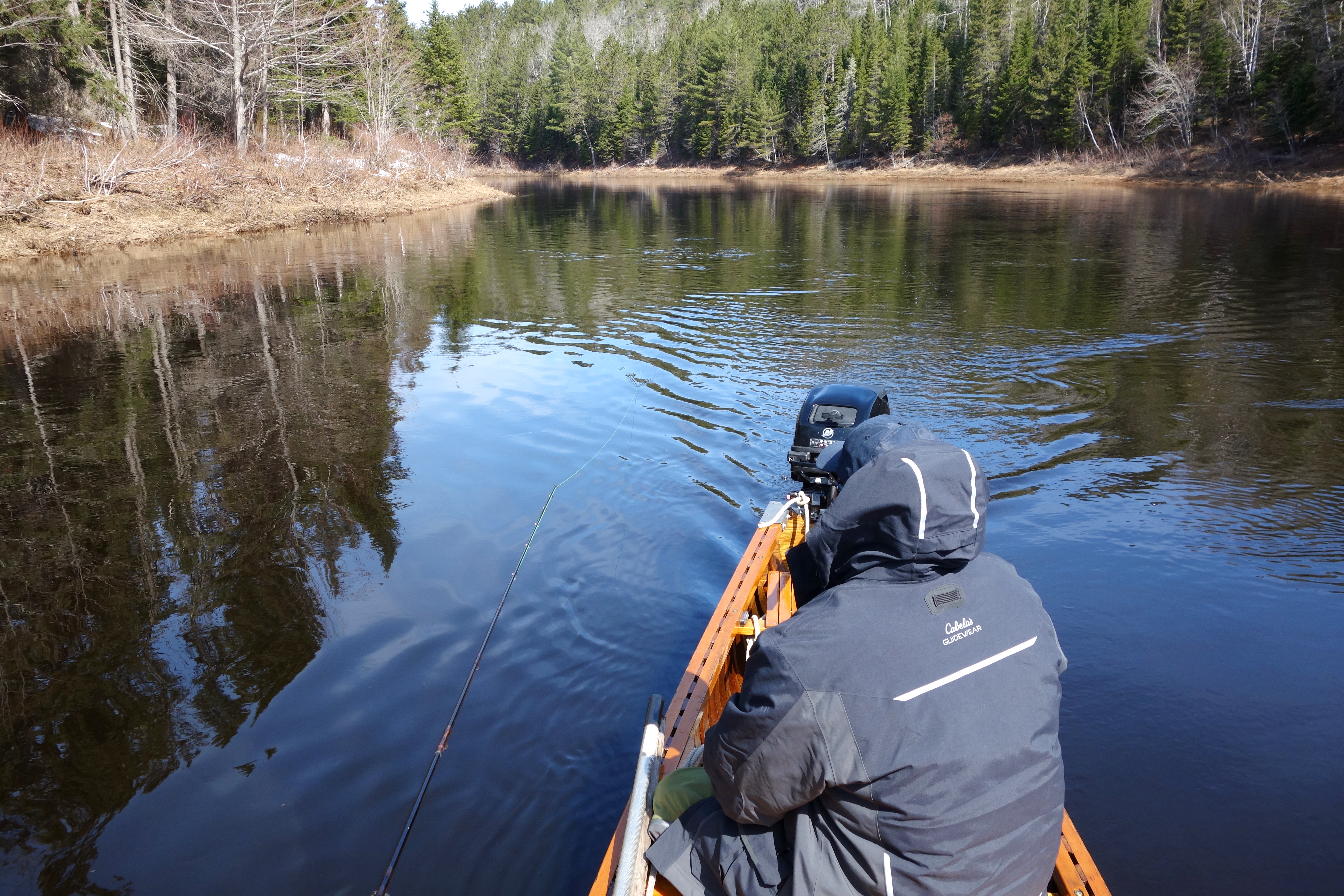 Early spring fishing is done deep and slow along the shorelines

See the new comment button below right.  Feel free to make comments or ask questions for the benefit of all readers.