The Miramichi Salmon Run for 2016

The Province of New Brunswick estimates the salmon run in both branches of the Miramichi River each year by maintaining fish trapping nets located a short distance below the head of tide at Millerton on the Southwest branch,  and at Cassilis on the Northwest. These traps capture the salmon and grilse live without injury, and they only capture a certain portion of the fish going by.  Their efficiency is variable in different heights of water and from other factors.  In fact in some years high water flows necessitate that the nets be removed, and significant portions of the run are not sampled at all.  This happened during Hurricane Arthur in July of 2014, and during the giant rains at the end of September 2015.  Still, by carefully recording and then tagging the salmon and grilse that are caught in the traps, then the counting of the number of tagged fish as a percentage of total recaptures at upstream sites – all done year after year for many years – the government has a reasonable methodology to extrapolate the total number of salmon and grilse in the run.  The Department of Fisheries and Oceans will tell you that it is a minimum, conservative estimate, and that it is not meant to be any more than that.

Appearing below are graphics copied from the government website. The numbers on the left side of each graphic show the Millerton trap catch of salmon or grilse from 2001 through 2016.  The green columns are the numbers of fish caught in the trap through October 15th and the orange columns are through October 31st.  In most cases the numbers are almost the same because either the run is mostly in by the 15th or because the net was out before the 31st.

Here below are the graphics for Main Southwest Miramichi Salmon 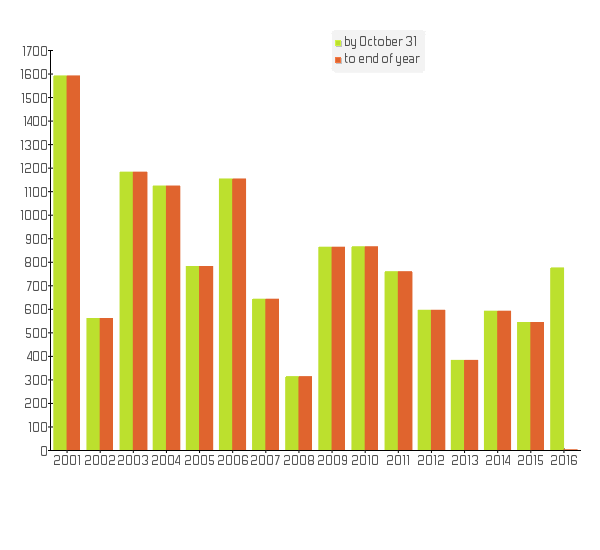 Here are the graphics for Main Southwest Miramichi Grilse

Here are the graphics for the Northwest trap at Cassilis salmon. 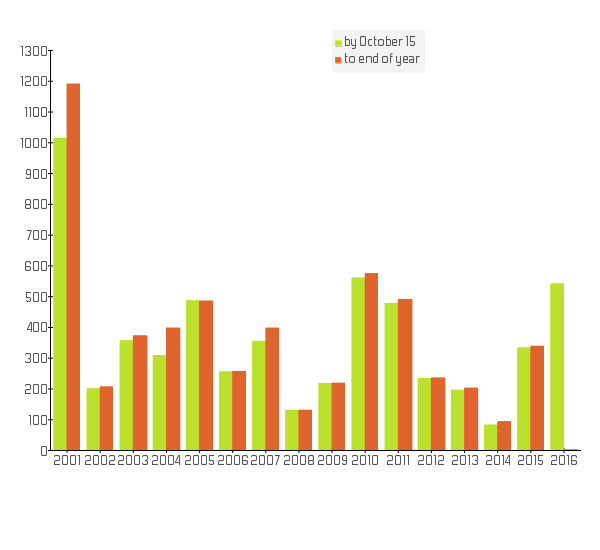 Here are the graphics for the Northwest trap at Cassilis grilse. 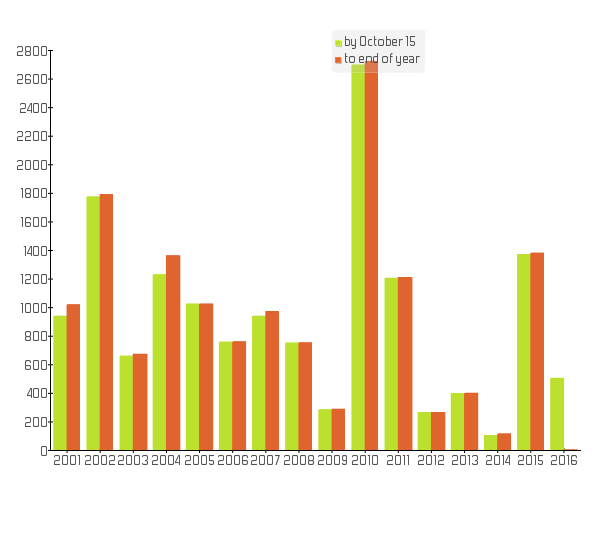 What is best reflected by these graphs is how each year looks relative to the others in the time sequence, and therefore the general trend in the overall annual returns to the river.

While there has clearly been a decline over the last 15 years, the next most striking thing, and it is true for both the Main Southwest and the Northwest, is that the abundance of salmon has not declined nearly as much as the numbers of grilse.   No one that I know is certain why this is, but it would appear that for whatever reason grilse are finding it more difficult to survive their winters in the ocean than the larger salmon are.  It could be feed, temperature, predation, commercial fishing activity – or some combination of all these factors – that is the culprit.

The final trap numbers for 2016 came out like this:

The Millerton trap on the Maine South West Miramichi averages efficiencies of 5% on salmon and 9% on grilse – meaning that historically, on average, it catches one in 20 salmon that come up the river and one in 11 grilse – so if this year is representative the run of salmon would be 15,520 and the grilse would number 11,443. On the Northwest Miramichi the historic efficiencies are 10% and 11% for salmon and grilse.  That would mean 5,420 salmon and 4,595 grilse in the NW for 2016. The total run of all salmon and grilse would therefore be around 36,978 – split fairly evenly between salmon and grilse. Note that my calculation of 36,978 is just an estimate based on the historical average trap efficiencies.  The New Brunswick DFO will analyze all the data make an official calculation over the winter.  Yesterday I googled up an old scientific report on the Miramichi salmon run, and in 1935 an analysis of the commercial net fisheries in Miramichi Bay indicated that the run at that time was about 60% grilse, so things haven’t changed all that much.

As salmon rivers go 36,978 is a big number, and the Miramichi system definitely still provides some world class fishing opportunities, but it is probably only two thirds of the average run from 15 years ago. It does, though, appear to be relatively stable.  Also, in terms of the trend, it does appear that both 2015 and 2016 were up years overall.

At a recent meeting of the MSA board, president Mark Hambrook stated that the returns to the river in recent years from smolt going to sea and returning as adults were down from a historic 10% – and even more some years – to about 3% currently. The second big factor in the final returns to the river is the number of smolts going to sea to begin with.  The number of smolts begins with the number of eggs laid in the river gravel each fall.  The magic number for meeting full spawning requirements is an egg deposition of 2.4 eggs per square meter of wetted rearing habitat.  All of this is complicated by the size of those eggs which depends on the makeup of the run – big alternate spawners have larger more viable eggs than smaller salmon.  Because we have released large salmon for many years the Miramichi has a large percentage of big, annual and repeat spawners in its run.  The current conjecture is that the Miramichi system will reach its spawning requirements in 2016, and that is certainly very important.

Why is ocean survival down from 10% to 3%? That is the big question, and no one knows the answer for sure.  Some of the prime suspects are individually, or in some combination: shrinking winter habitat due to ocean warming, removals of salmon by both directed and non-directed commercial fishing, and overharvest of the salmon’s historic prey species such as capelin and krill.  These are the things the current research projects are hoping to narrow down to some conclusions so that corrective action can be undertaken.

Perhaps you have heard that a group named C.A.S.T. or the Collaboration for Atlantic Salmon Tomorrow, in which the Miramichi Salmon Association and the Atlantic Salmon Federation are both important players, has purchased a number of $100K sonar/cameras like those used to count salmon on rivers in Europe. Two of these are being installed near the bridge in the village of Blackville, NB, and for 2017 there will be another measure of the strength of the salmon runs in the river.