More Exciting Donations for the MSA US Winter Event 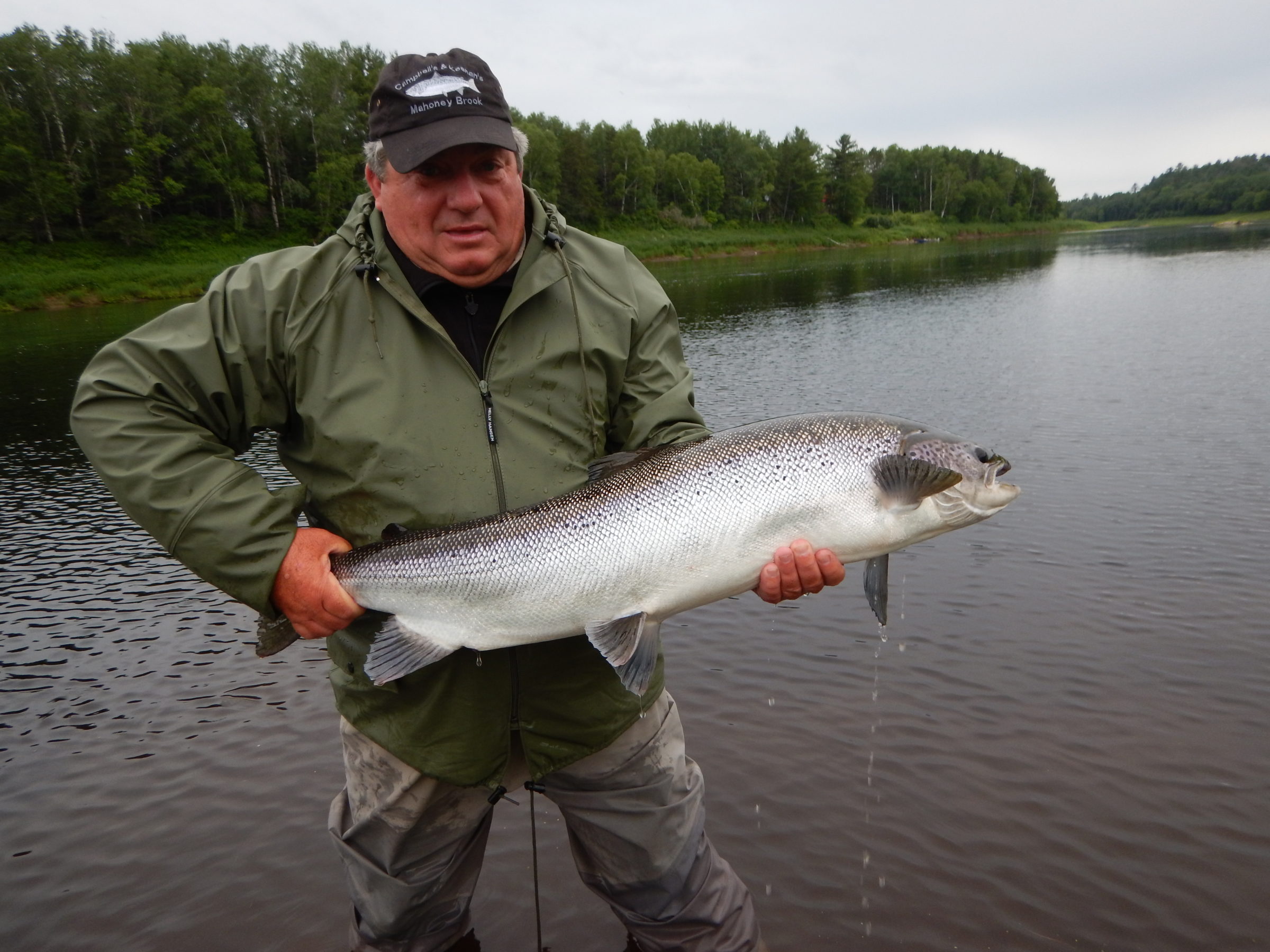 Oh…we’re half-way there… Half-way, that is, until the first bright salmon come back to the Miramichi next June. There is some fun and some important work to be done first though. Read on!

In my last blog post I showcased a historic canoe that will be offered during the MSA US auctions and dinner season beginning on January 28 and running until Feb. 8.  The dinner itself, including raffles, silent auction, and live auction will be held at the Portland Country Club in Falmouth, Maine on Feb. 5.  You can also attend virtually – including bidding and buying raffle tickets.  I said that over the next few weeks I’d be making more posts to Facebook and my blog about some of the exceptional auction items that will be featured at these events.  Here are three: 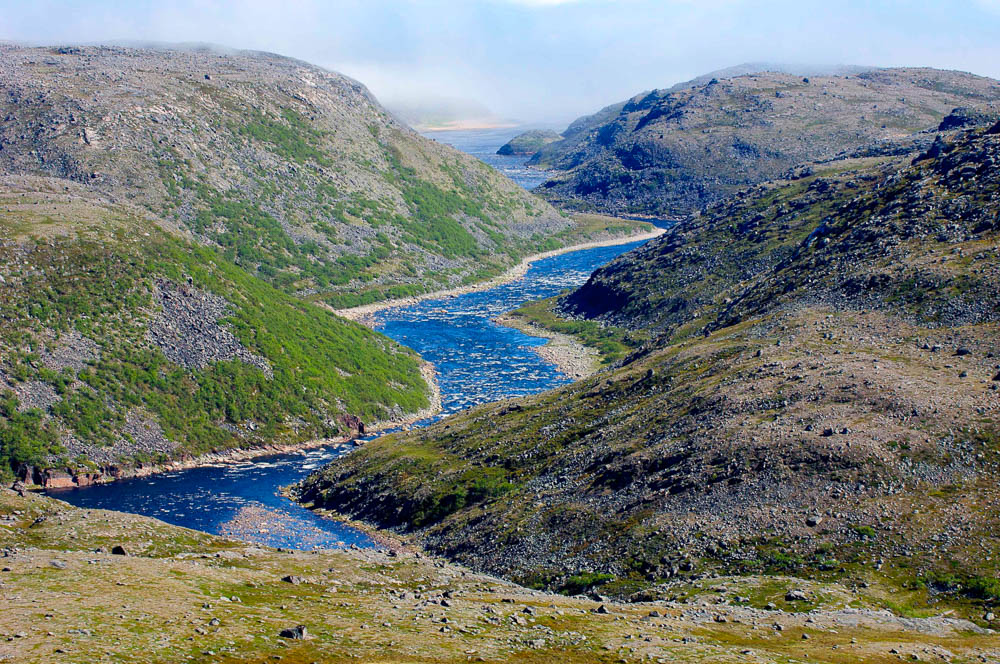 One of our donors is Far Bank, the owners of Sage, Redington, Rio, and a fly-fishing travel company called Fly Water Travel.  In their own words “Fly Water Travel is a team of fly fishing and travel experts dedicated to arranging trips to the world’s finest fishing destinations.”  The FWT donation is a $1,000 discount for a trip for two that costs at least $2,000 per person.

Fly Water Travel sent me their catalog, and there are certainly a mind-boggling amount of incredible destinations to choose from.  If you are a die-hard Atlantic salmon angler there are destinations in Canada, Scotland, Iceland, Russia, and Norway.  Staying within the confines of anadromous species there a number of different venues in Alaska, and catching my eye especially are some great looking Arctic char trips to Greenland. 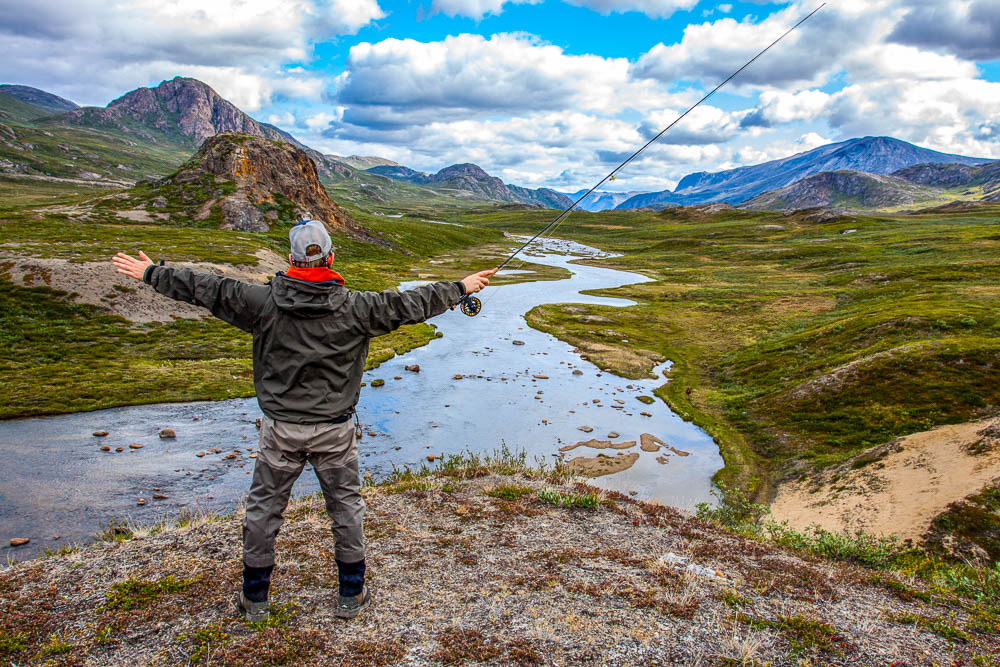 Greenland for Arctic char. How incredible is this place!

If you are thinking of a trip within the next two years – they are giving you until the end of 2023 to use the discount – why not check out Fly Water Travel?  They offer far too much for me to cover here, but I noted that FWT also has hosted trips, women’s trips, and schools for fly fishing and casting.  By the way, we will also have donations from Sage, Redington and Rio too.

The FWT donation is on our website now at this link $1,000 Gift Certificate for Fly Water Travel Trip for Two | Brad Burns Fishing.   While the actual auction bidding doesn’t start until noon on January 28, it is definitely not too early to be looking over the inventory of possible trips.

Another fabulous donation comes from Tom Nicholson who, at the suggestion of his fishing friend and MSA director Stephen Hibbard, has donated a pair of Bogdan Number 0 fly reels.  These reels, of course, come with a story.  A man named John Watkins from Providence RI was a decorated WWII U.S.A. fighter pilot who started in journalism as a reporter, then made his way up to become the publisher of the Providence Journal where he left a very impressive record expanding the paper by more than 500% and adding other communications companies to The Journal’s corporate structure. 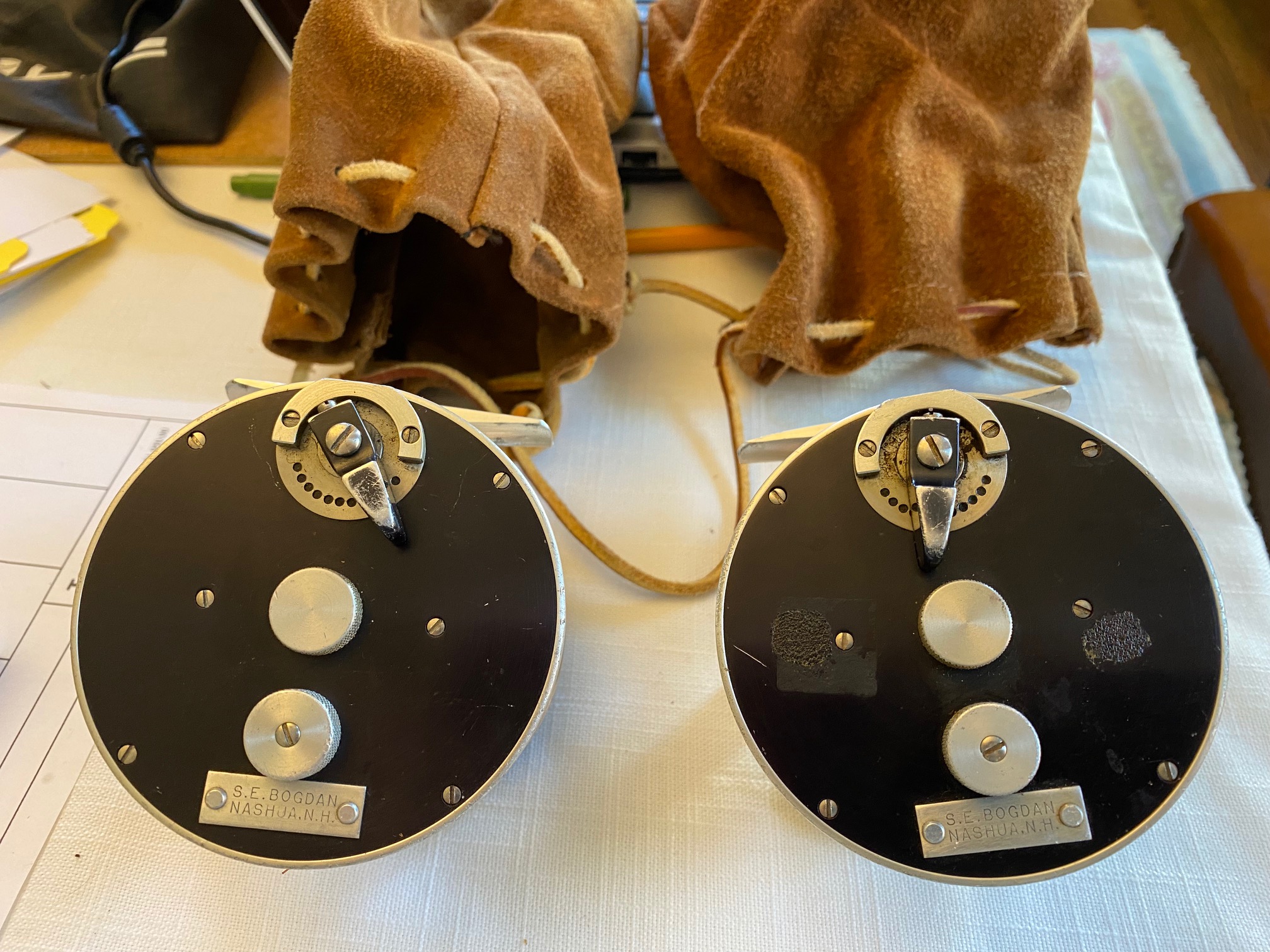 Like many sensible executives Watkins was a passionate salmon fisherman, and these two Bogdan reels accompanied him to some of the world’s finest salmon rivers.  The Number 0 has been described as the work horse of the Bogdan reels for single-handed rods.  I am house-sitting these reels until the auction, complete in their original, pristine leather bags, and it was my first chance to really play with one of these beauties.  I particularly like the lever drag adjuster which actually goes from almost free spool to near lock up in about 90 degrees.  I pulled some line from the reels, and the drags seem very smooth.  Also, always a favorite idea of mine, is the multiplying feature.  These reels feature a 2 to 1 retrieve which would make them faster than any large arbor reel without the ungainly diameter found in some reels.

I see this as a fabulous chance for one angler to own a matching pair of these reels providing a spare for trips, or the ability to rig one outfit for dries and another with wet flies.  One reel will appear in the online auction starting at noon on Jan. 28 and the other will be in the live auction at our dinner on Feb. 5.  It is important to note here that people can attend the dinner either by coming in person, or virtually via zoom.  Zoom attendees will be able to text in their bids, and our Zoom hostess Caroline Marin will place the bids.  Sounds like great fun! 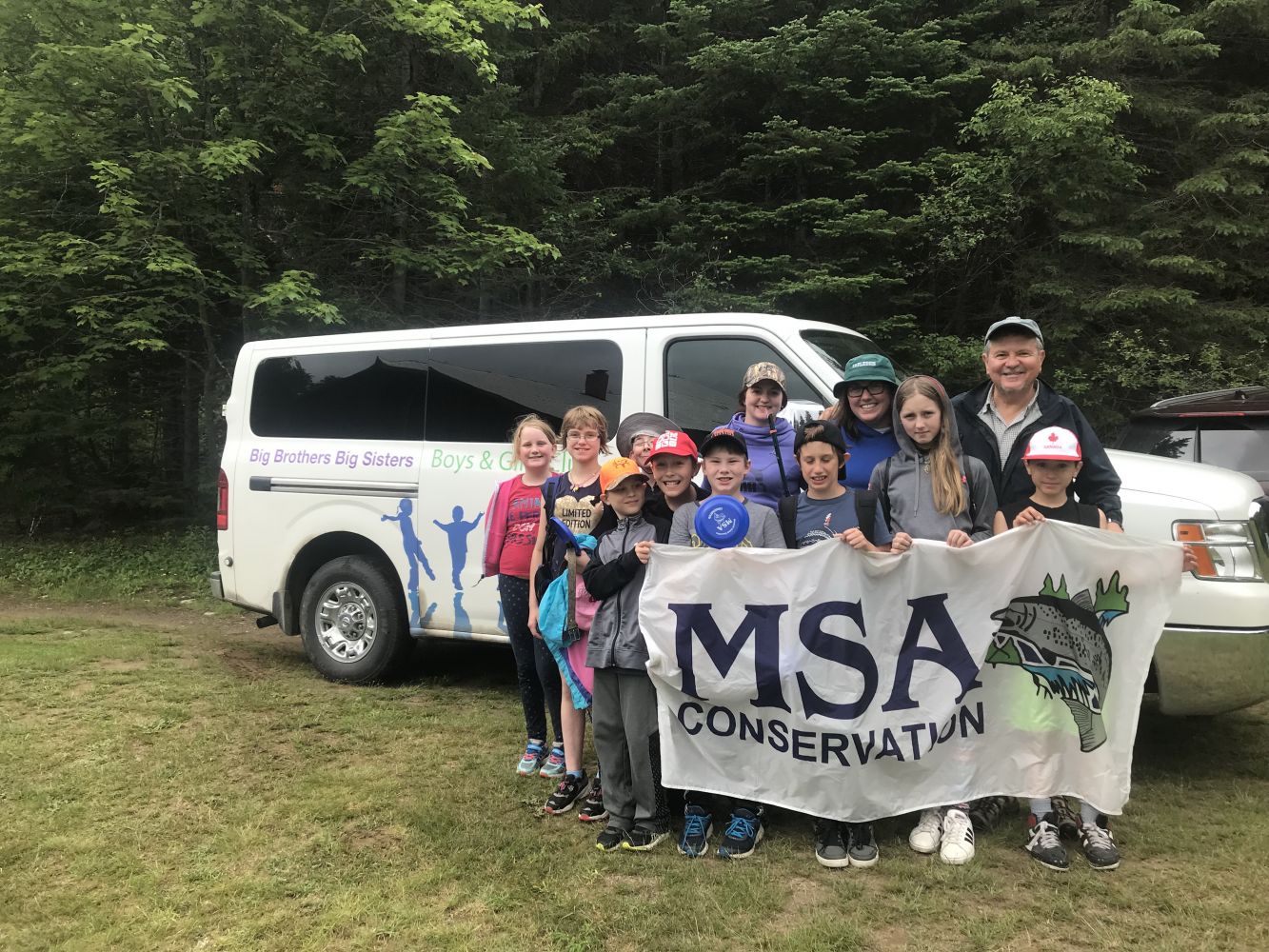 Paul Valeri with a group of kids from Big Brothers and Big Sisters that he and other volunteers are introducing to Miramichi salmon fishing.

Tom has specified, as he knew his old friend John Watkins would want, that the funds from this auction item go to the MSA’s First Cast initiative conceived in 2009 by MSA US director Paul Valeri.  Over the course of two days every summer First Cast volunteers, hosted on the grounds and fishing pool of the Atlantic Salmon Museum in Doaktown,  introduce a group of kids to Miramichi salmon fishing. 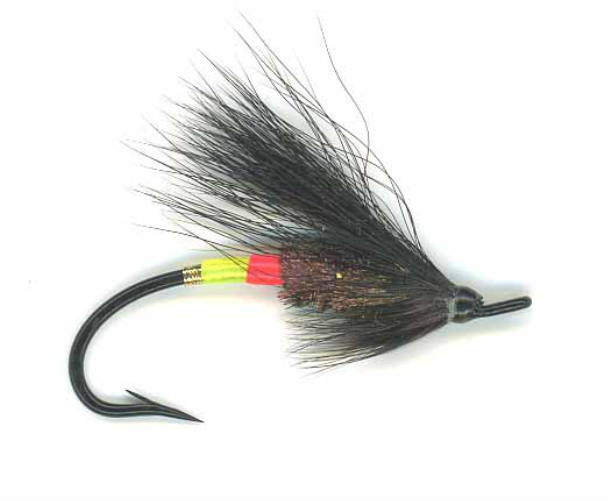 When the great, New Brunswick fly tier, Warren Duncan, passed away in March of 2007, Eldredge Brothers fly shop in Cape Neddick, Maine pulled their inventory of his flies from their shelves and saved them for the future.  Owner Scott Eldredge, and manager Jim Bernstein – who has been with Eldredge since the shop opened in 1992 – donated 6 of their brand-new Warren Duncan flies, and a Wheatley clip style fly box to our auction to benefit the MSA’s conservation efforts.  The flies include: a Thunder and Lightning, Blue Charm, Undertaker, Green Machine, Ally’s Shrimp, Cosseboom, and 2 bombers.  By the way, Warren Duncan invented the Undertaker pattern, and it is definitely one of the most catching salmon patterns ever invented.  You can see this auction item at this link.

MSA US board member Ralph Vitale secured this donation, and took the flies home where he put them under a magnifying class to study Warren’s tying techniques.  Ralph is a very accomplished tier himself, but he said that he found a half dozen areas in the flies where tying maneuvers were executed so smoothly that he could not figure out how it was done.  For those of you who ever watched Warren Duncan tie, the most impressive part was not simply in the quality of his ties, but in how incredibly quickly he did it.  I remember listening to Warren one winter morning when he was tying at LL Bean.  With a fairly straight face Warren insisted that road-kill black bear was no good.  A serious tier must gather his material from the back of the ear of a live black bear…  While we were all chuckling Warren’s hands blurred around the vice and another perfectly finished fly was laid on the table.

If you haven’t yet registered for the MSA USA Winter Event at the Portland Club In-person or virtual, now is the time.  Here is the link.  If you have any questions please contact me at bigbass@maine.rr.com.